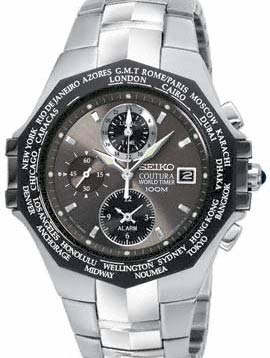 For a long time in the US, watch Advertising was limited to spots in the Wall Street Journal and financial or business magazines (not to mention the limited number of watch magazines such as WatchTime, Revolution, International Watch, and others). Rolex was the king of the advertising heap, but you weren’t about to a Rolex advertisement on television. Last night however, that all changed when I saw a television commercial for a Seiko Coutura watch.

Seiko has been working very hard to move upmarket. For a long time, they have had a bit of a “cheap Japanese watch” persona. While they made very good watches, they were sort of undervalued in the US for those who did not value their quality diving watches. In the past several years, they started to release some more interesting watches along with some very interesting movements. Seiko brought us the Kinetic movement (which uses a rotor like an automatic movement to charge the battery), and now the Spring Drive (also uses a rotor, but actually has a mainspring. Uses a quartz regulator to provide the reliability of a quartz movement with the look and feel of a mechanical movement). Each of this is a step above the standard quartz movement and Spring Drive watches go for thousands of dollars.

To showcase their new watches, Seiko has taken to some very aggressive advertising techniques. In addition to now being on television, I have see magazine insert booklets, along with promotional goods. They are seriously working to up the value of the brand, and get more people wearing Seiko watches. In Japan, Seiko has a much different following than they do here. They are best known their for their broad range of functional and good looking diving watches (which are mostly used for everyday use). However, prices there are still in the hundreds, not thousands of dollars.

The Seiko commercial last night was very short, and reminded me of a cologne commercial (due to the fact you have no idea what the commercial is trying to sell until you see the product at the end). It was one of the shorter commercials and lasted maybe 20 seconds if that. You had some stylized shots of a man swimming. Then a quick mention about how the Seiko Coutura can measure three time elapsations at once (at least on one model), followed by a closeup view of the watch’s face (the best part of the commercial). The Coutura is a fine watch, not particularly glamorous or exciting, but nice. The Seiko Coutura line of watches has many iterations, but each shares the same riveted or angular bezel and arrow hands design. Seiko has done much better designing their diver watches, but the Coutura’s non-offensive and marginally unique feel will appeal to many mainstream watch buyers. Japan is more known for making interesting and technical watches, rather than beautiful ones.

I doubt that this was the first Seiko commercial on television, but it is the first that I have personally seen. It is most likely part of an overall marketing campaign being promoted by Seiko, and good for them for trying. I just hope it does not increase the prices of Seiko’s too much, which have typically represented a very good value (minus the exorbitantly priced Spring Drive line). Look out for other watch makers to follow suit, such as Hamilton, Buloval, and Citizen (who owns Bulova now).