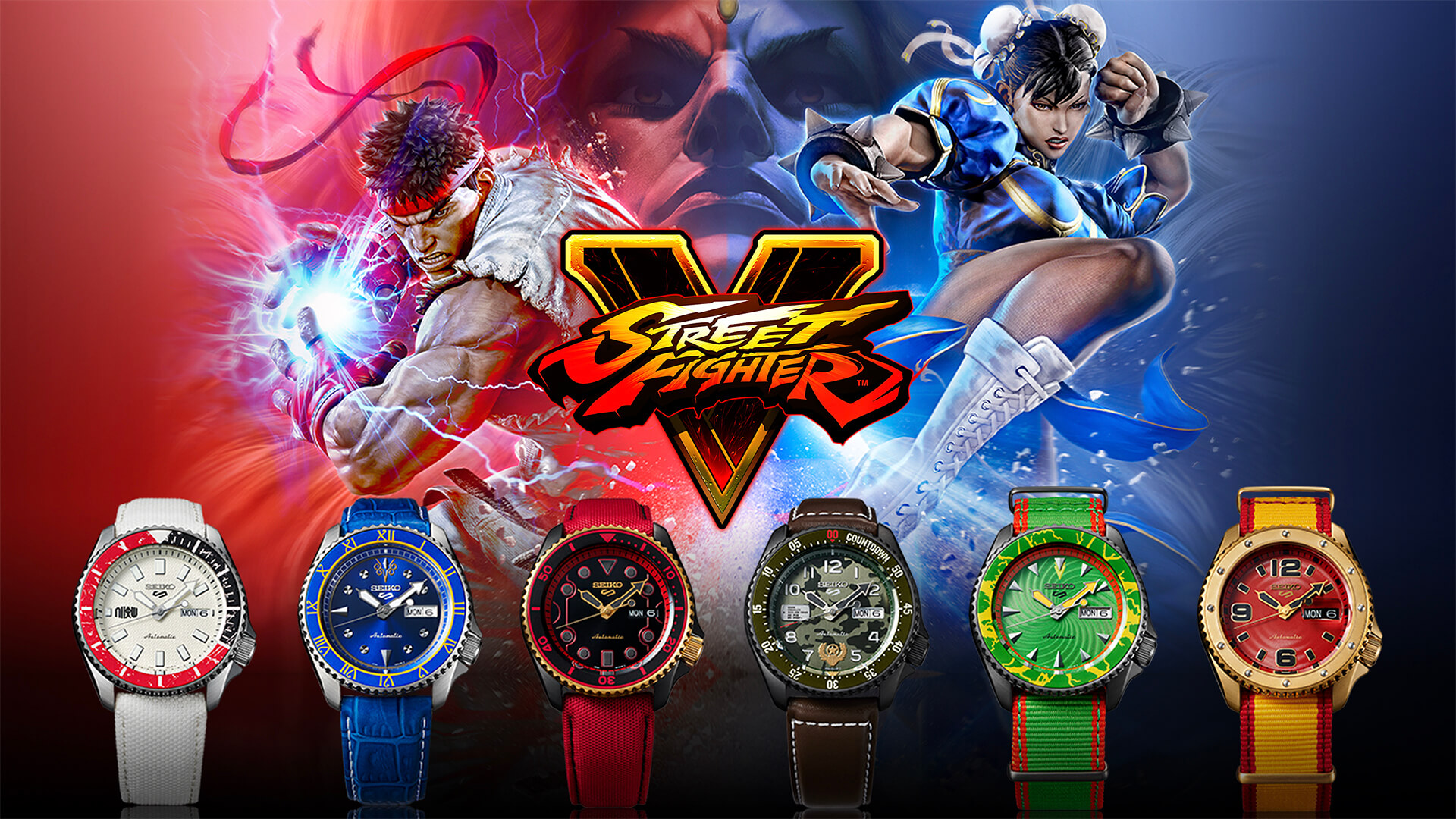 When the reinvigorated Seiko 5 Sports lineup was unveiled in late 2019, this new entry-level mechanical series for the brand was meant to be both streamlined and infinitely variable. While every Seiko 5 Sports model follows the iconic formula of the now-discontinued SKX diver series, the coats of paint on top of this shape can be almost anything, ranging from classic blue dial sports designs to aggressive blacked-out streetwear styles. It’s a page that might have come from the original Swatch handbook, and a brilliant idea for attracting a wide variety of young first-time mechanical buyers with a rainbow of style options on top of a recognizable base. As this line continues, the catalog of Seiko 5 Sports options continuously changes, bringing new options for buyers with the frequency of a fast-fashion brand. The latest set of releases in this trend is one of the flashiest thus far, pairing Seiko with the iconic “Street Fighter” fighting game franchise for a series of limited-edition models based around some of its most famous characters. The Seiko 5 Sports Street Fighter V Limited Edition series consists of six models ranging from clean and sporty to outrageously wild, each inspired by a classic “Street Fighter” character including Ryu, Ken, Chun-Li, Guile, Zangief, and Blanka. 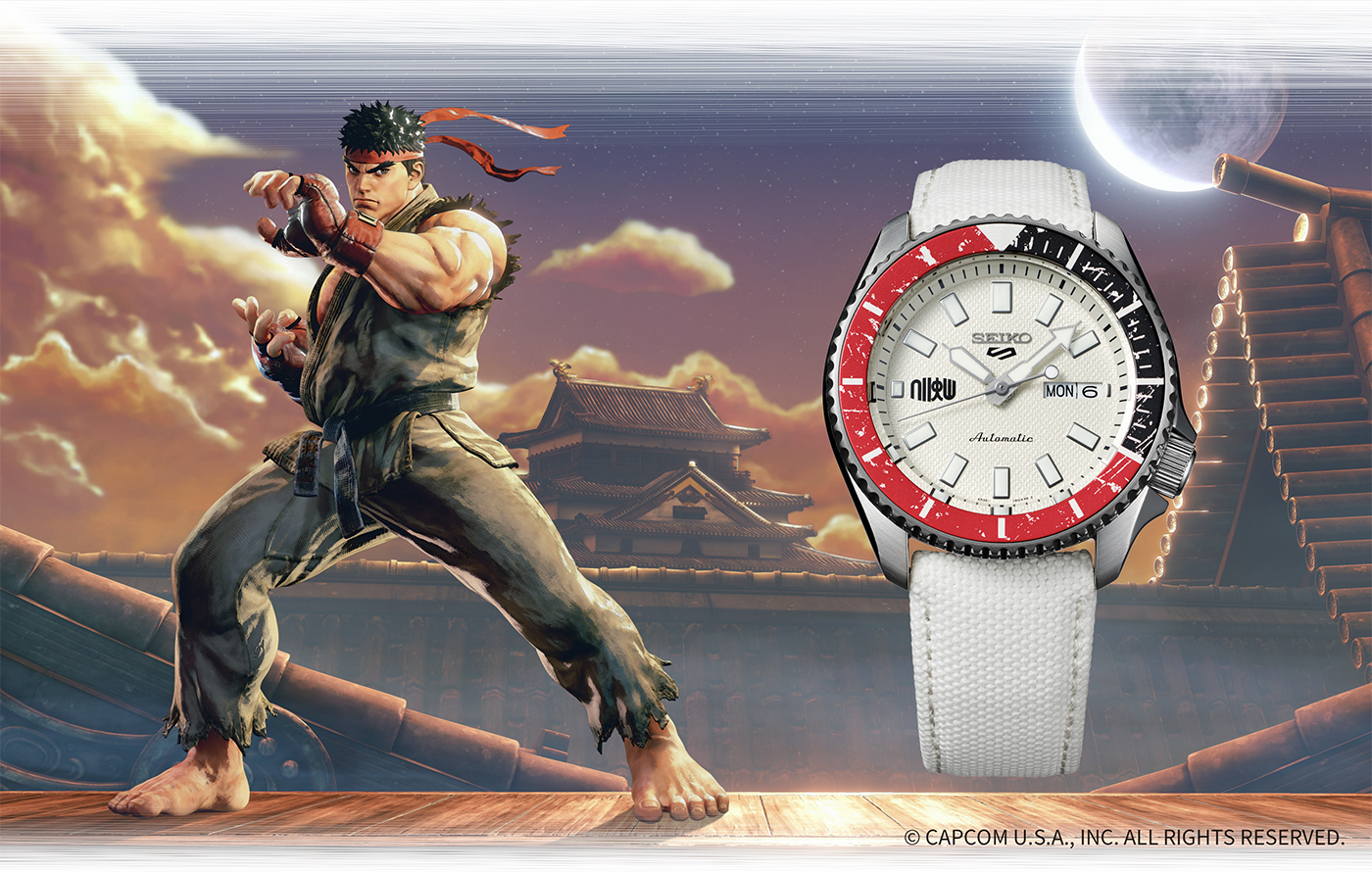 The Seiko 5 Sports Street Fighter V Limited Edition SRPF19, or the “Ryu,” is the simplest and most classically styled of the lot. Like its stablemates, it features a 42.5mm stainless steel case in classic Seiko diver form with 100 meters of water resistance, but the design is filled with touches that reflect the Japanese judo lineage of its inspiration. The bezel, for example, features a red and black faux-weathered pattern reminiscent of Ryu’s sparring gloves, while the display caseback is printed with the control inputs to perform his signature “Hadouken” attack. The off-white dial offers a few unique tweaks from standard 5 Sports models, including unique rectangular applied indices and a simplified kanji inscription at 9 o’clock lifted directly from the character’s gloves. A leather-lined white canvas strap completes the package, with a texture inspired by a judo gi uniform. Like all models in the 5 Sports series, the SRPDF19 is powered by the manufacture 4R36 automatic movement, offering a 41-hour power reserve at a 21,600 bph beat rate. 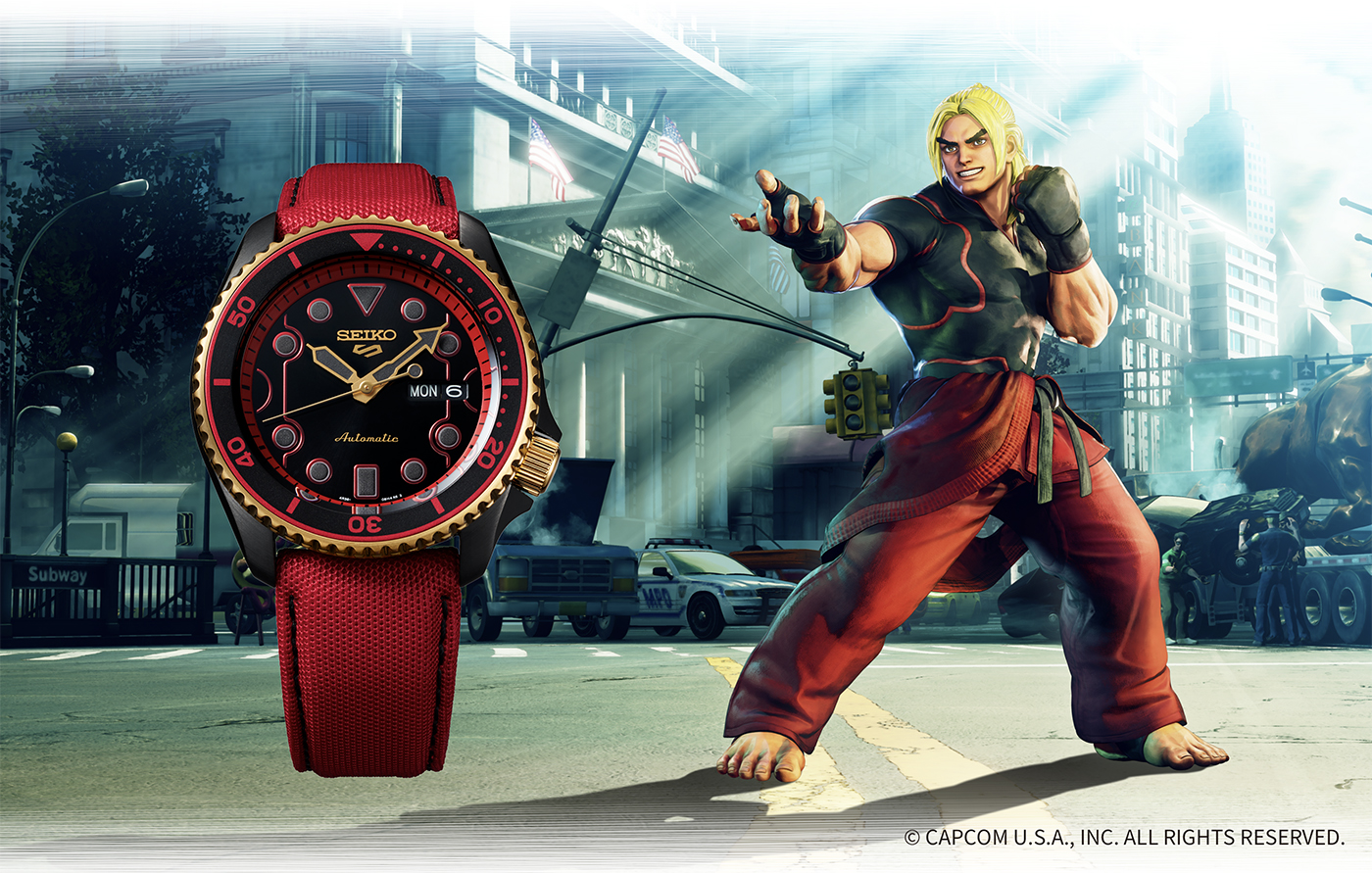 Next in the series is the Seiko 5 Sports Street Fighter V Limited Edition SRPF20, nicknamed the “Ken.” Inspired by Ken, Ryu’s brash, aggressive American training partner, the SRPF20 is naturally a bit higher impact visually than its counterpart. The black PVD case, gold PVD crown and bezel, and the black and red bezel insert immediately set the “Ken” off visually with nods to his trademark golden-blond hair and red judo gi. The dial continues this trend, with gold tone hands and dial text contrasted with a vibrant red rehaut. The classic applied diver indices and lume fill are bent to the color scheme with black pigmented lume applied to red indices, while etched red accents traverse the dial in a pattern inspired by Ken’s shirt. Like the SRPF19, the “Ken” features a caseback etching of an iconic character move sequence, in this case the moves required for Ken’s spinning “Shoryuken” punch. The SRPF20 wraps things up with a leather-lined red canvas strap, harkening back to Ken’s distinctive red uniform. 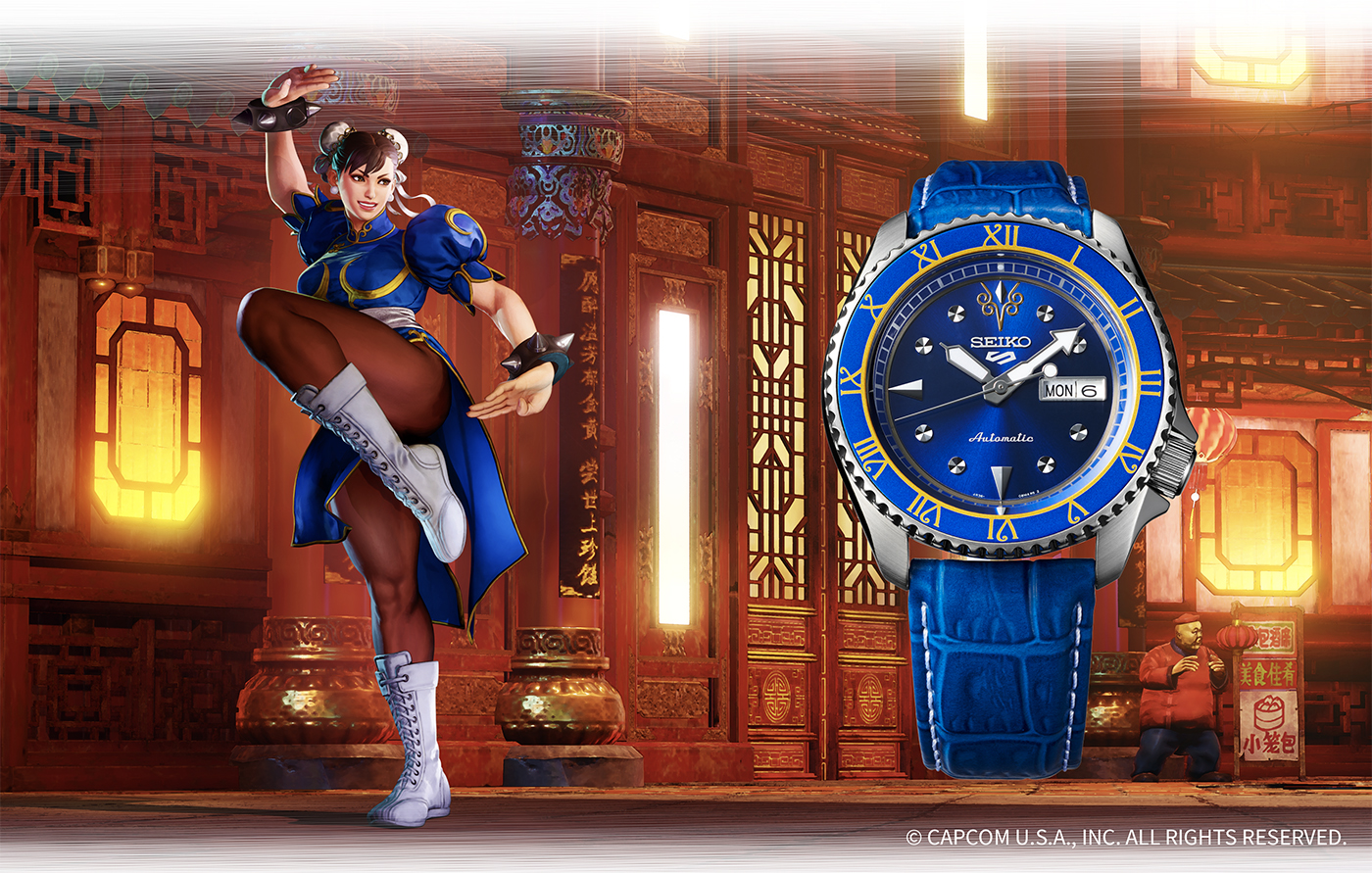 It’s with the Seiko 5 Sports Street Fighter V Limited Edition SRPF17, or “Chun-Li,” that the designs begin to go from bold but cohesive to louder and a touch more literal. Chun-Li’s Chinese silk dress is the biggest visual influence here, with a likely divisive blue bezel with stylized yellow Roman numerals echoing that iconic dress’ pattern. Likewise, the dial goes for a jewel-tone sunburst blue, while the diver indices are replaced with a spiky set of applied steel indices echoing Chun-Li’s bracelets. The caseback printing this time around is the movement controls for the character’s signature “Spinning Bird Kick.” The strap is a real highlight of the “Chun-Li,” with a cobalt blue alligator pattern accented by a twisting dragon motif on its inner lining. 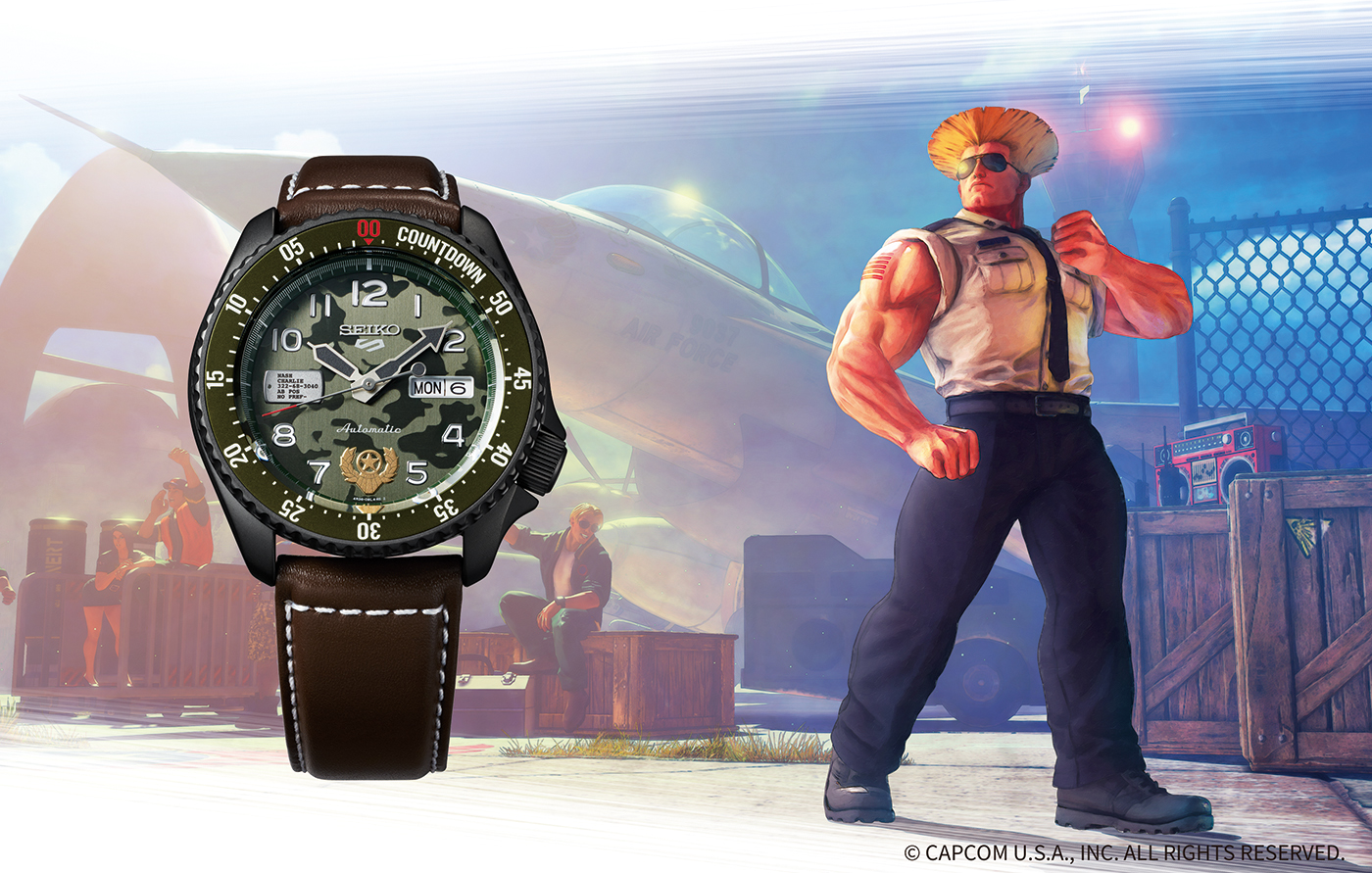 Major Guile has always been one of the most visually distinctive characters in the “Street Fighter” franchise. With oversized biceps, camo fatigues, a massive American flag tattoo, and that iconic comically tall flat-top hairdo, there should be no shortage of visual cues for a character-inspired design to play with. The Seiko 5 Sports Street Fighter V Limited Edition SRPF21, or “Guile,” simultaneously plays things remarkably safe while adding a handful of less immediately recognizable cues. The standard case is finished with Seiko’s proprietary black super-hard coating for a stealthy military look and topped with a bold graphic countdown bezel insert in olive drab. The dial also adds some recognizably tactical touches, with a camo pattern green dial surface and field watch style Arabic numerals. Even the lume fill of the hands is rendered in deep olive. The more idiosyncratic elements, however, come at 6 and 9 o’clock. Guile’s flight patch, which rarely shows up on the character in-game, is made into an oversized 6 o’clock marker, while the 9 o’clock marker takes the shape of a dog tag from Guile’s barely mentioned friend Charlie Nash. The caseback print, on the other hand, does zero in on one of the character’s most recognizable elements — the move command for the powerful “Sonic Boom.” Rounding out this military-flavored variant is a deep brown leather strap with white contrast stitching. 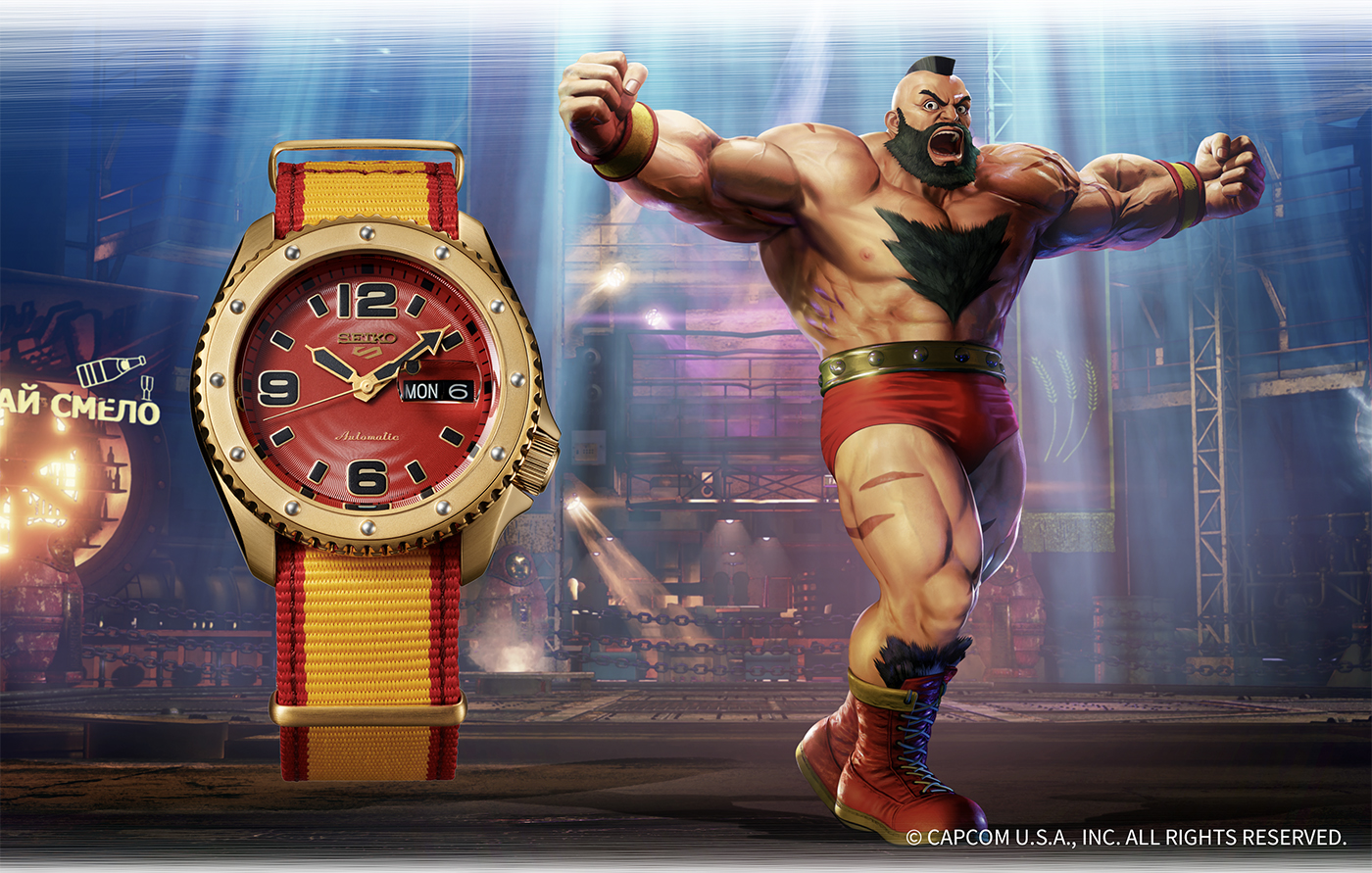 In the world of “Street Fighter,” few combatants are bigger or bolder than the Russian wrestler Zangief. An immense bear of a man with a boisterous personality to match, Zangief hardly cuts a subtle figure. The Seiko 5 Sports Street Fighter V Limited Edition SRPF24, or “Zangief,” is a suitably bold interpretation of the character and one of the more visually cohesive entries in the lineup. The case is finished in gold PVD, with a studded PVD gold bezel insert that echoes the character’s gold championship belt. For the dial, Seiko opts of a mix of applied gold-tone indices and handsomely bold Arabic numerals with high impact black pigmented lume. The crimson red dial is stamped with a rippling pattern, referencing Zangief’s powerful spinning “Cyclone Lariat” move. An interesting and rare addition for Seiko here is the cyclops magnifier over the day/date window, giving an extra punch of visual impact. It’s fitting here, as well, that one of the biggest combatants in “Street Fighter” receives one of the largest and most literal visual callouts, as the yellow and red two-tone NATO strap directly copies the design of Zangief’s wristbands. 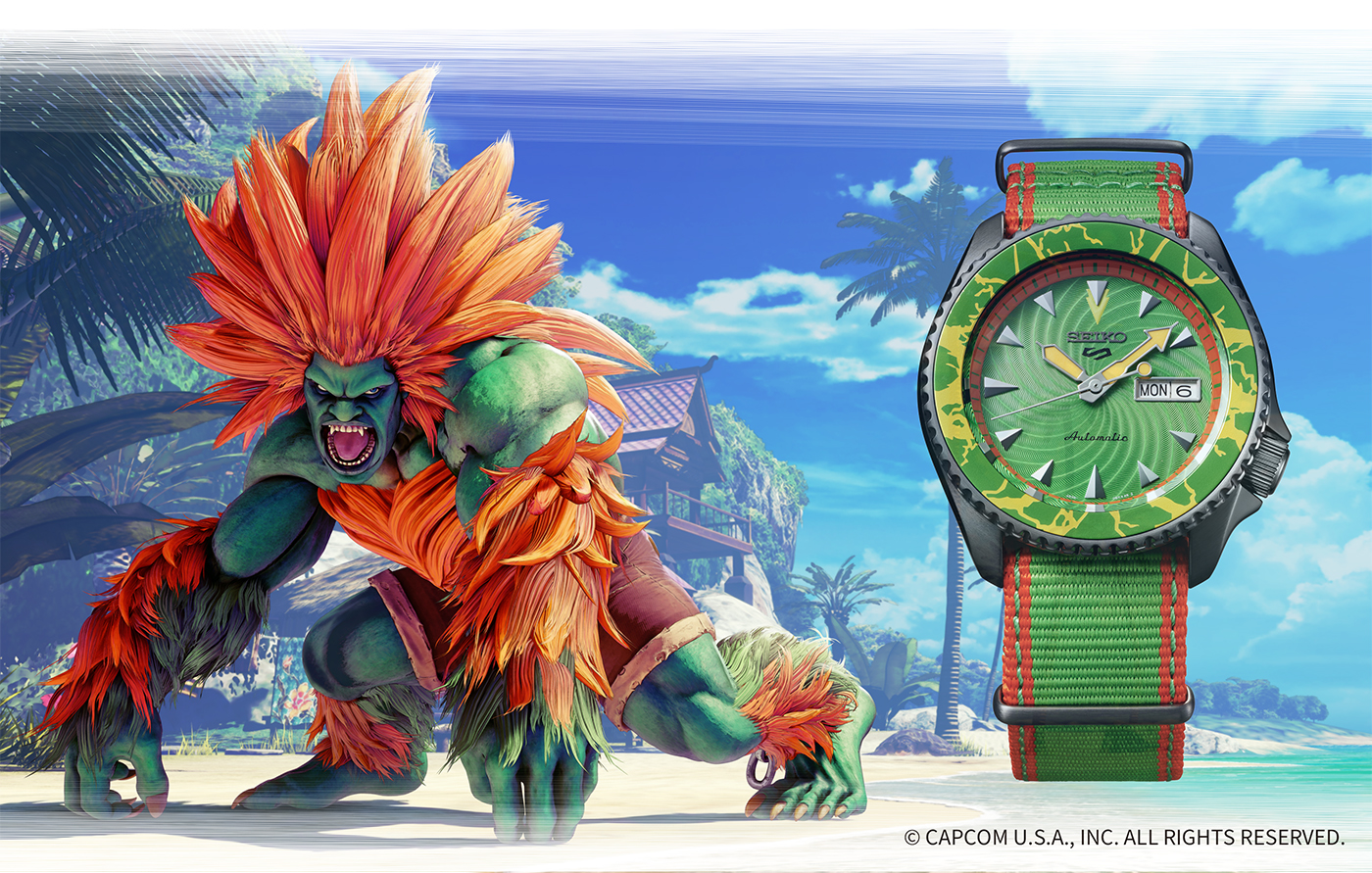 The final inspiration for this limited series is the bizarre and beastly jungle creature Blanka. To properly capture Blanka’s wild look and electric power, the Seiko 5 Sports Street Fighter V Limited Edition SRPF23 “Blanka” brings a chaotic mix of visual elements together with a shockingly vibrant orange and green color scheme. The case is finished in Seiko’s black super-hard coating, then topped with a green and yellow bezel insert featuring a lightning pattern evoking Blanka’s “Electric Thunder” move. The bright green dial is pressed with a swirling pattern meant to echo the character’s spinning attacks, while the new triangular indices echo his razor-sharp teeth. Like the “Zangief,” the “Blanka” opts for a two-tone NATO strap, rendered here in green and orange. 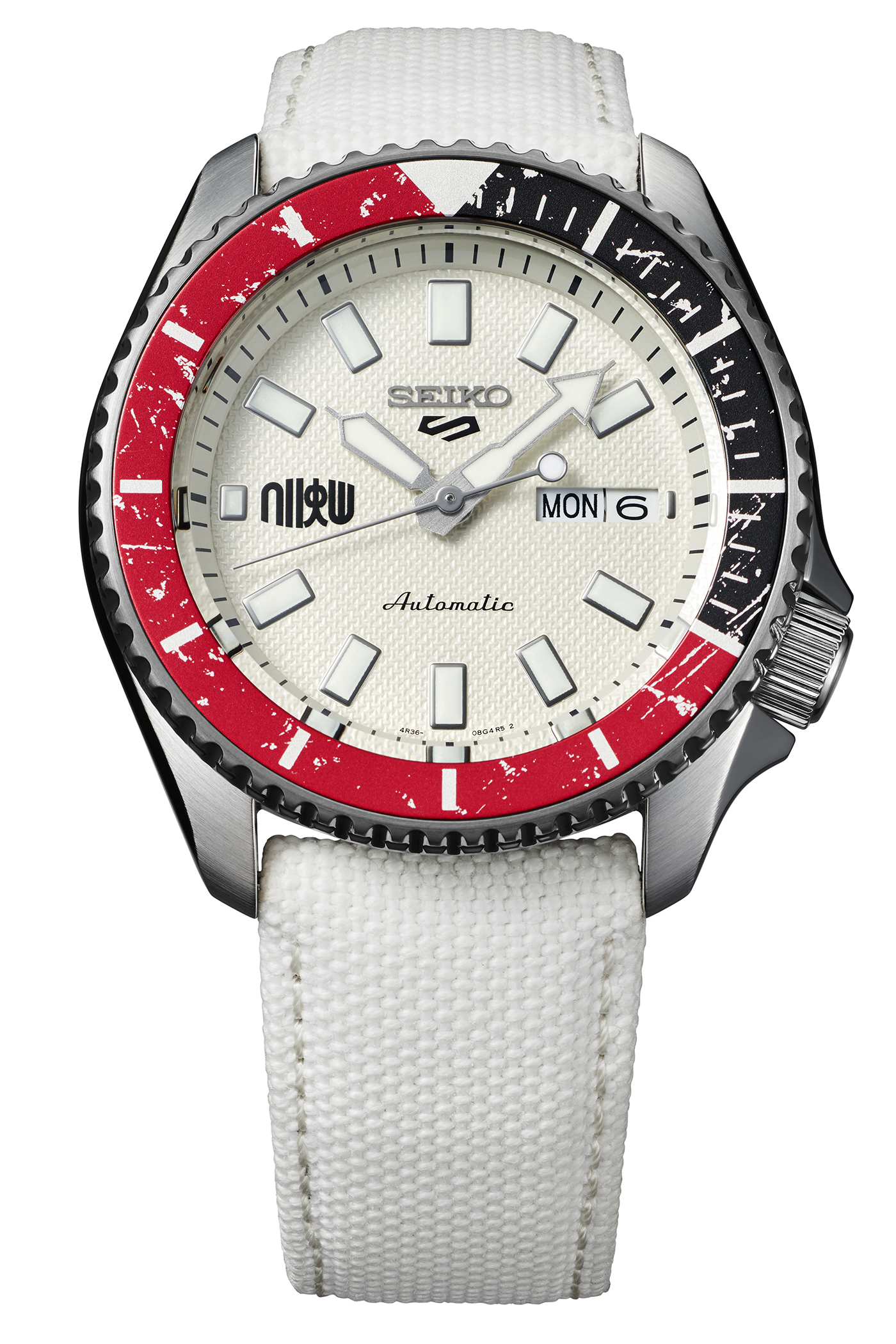