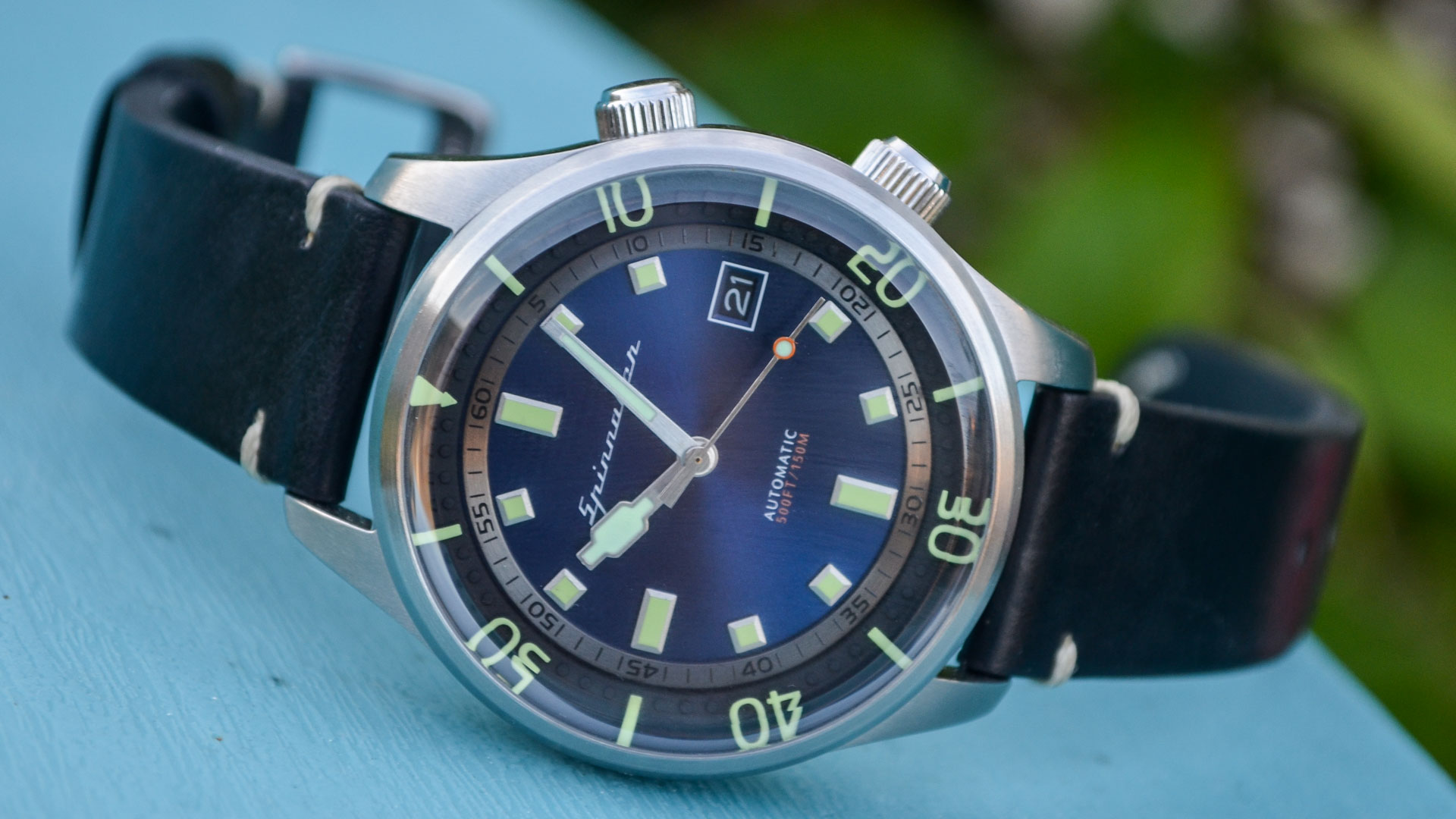 Spinnaker has always been a quirky brand in my eyes. Respectable, considering their budget-friendly approach, but still quirky and whimsical. Their outside-of-the-box designs have oft been bold, but attractive, and when paired with their affordable nature, automatic movements, and unique qualities, I’ve found myself suggesting them as a great “starter” watch for enthusiasts looking to find something different, or the wallet-conscious collector with a penchant for something fun to wear on the weekends. One of Spinnaker’s latest is a charming dive watch with a compressor-style bezel that’s controlled by a crown at 2:30 – the Spinnaker Vintage Bradner Dive Watch – and as an added bonus, it comes in at less than $300.

The influence for this watch – and I did not know this until I received the watch and started doing some research – is a wetsuit – and once I read that, it was blatantly obvious. The Bradner is aptly named after Hugh Bradner, an American physicist who is credited with inventing the neoprene wetsuit during his time working on the Manhattan Project. The wetsuit is a crucial tool in Scuba diving, and this watch really looks and feels very, er… Scuba-y. 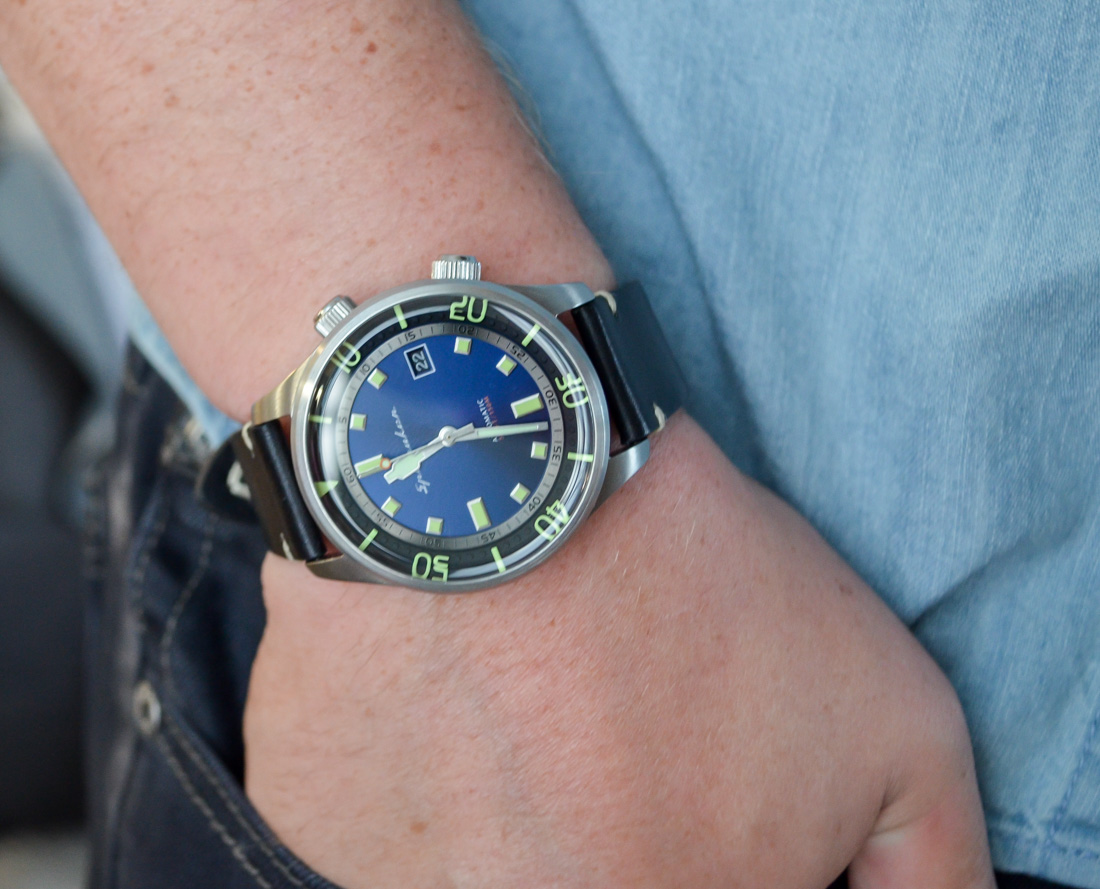 The stainless steel case measures in at 42mm x 14mm with a 20mm strap width and was surprisingly light considering its size and build. The construction of the case itself is interesting, if a bit tall. Let me preface this by saying, it isn’t uncomfortable, but wears larger than I would have expected and doesn’t exactly slide under a cuff very easily – something I found is due to the construction of the case. The case is comprised of a few parts. 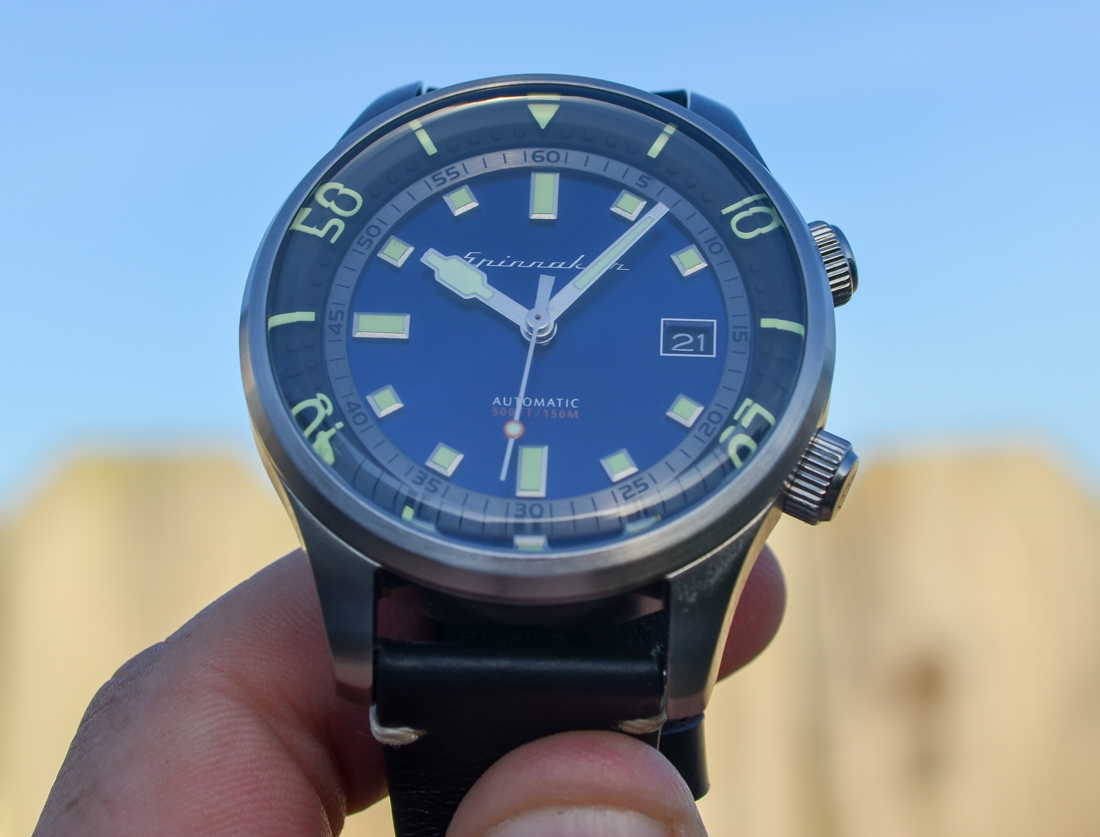 The domed sapphire crystal is fastened to the case by a thick, angled bezel which is then fastened to the case itself. Since the raised inner-bezel sits on top of the dial but inside the crystal, it provides plenty of depth. However, that means there still needs to be room for the movement underneath that, and furthermore, the screw-down case back. This creates a sandwich, pebble-esque feel to the watch that is definitely thick despite the modest 42mm diameter. 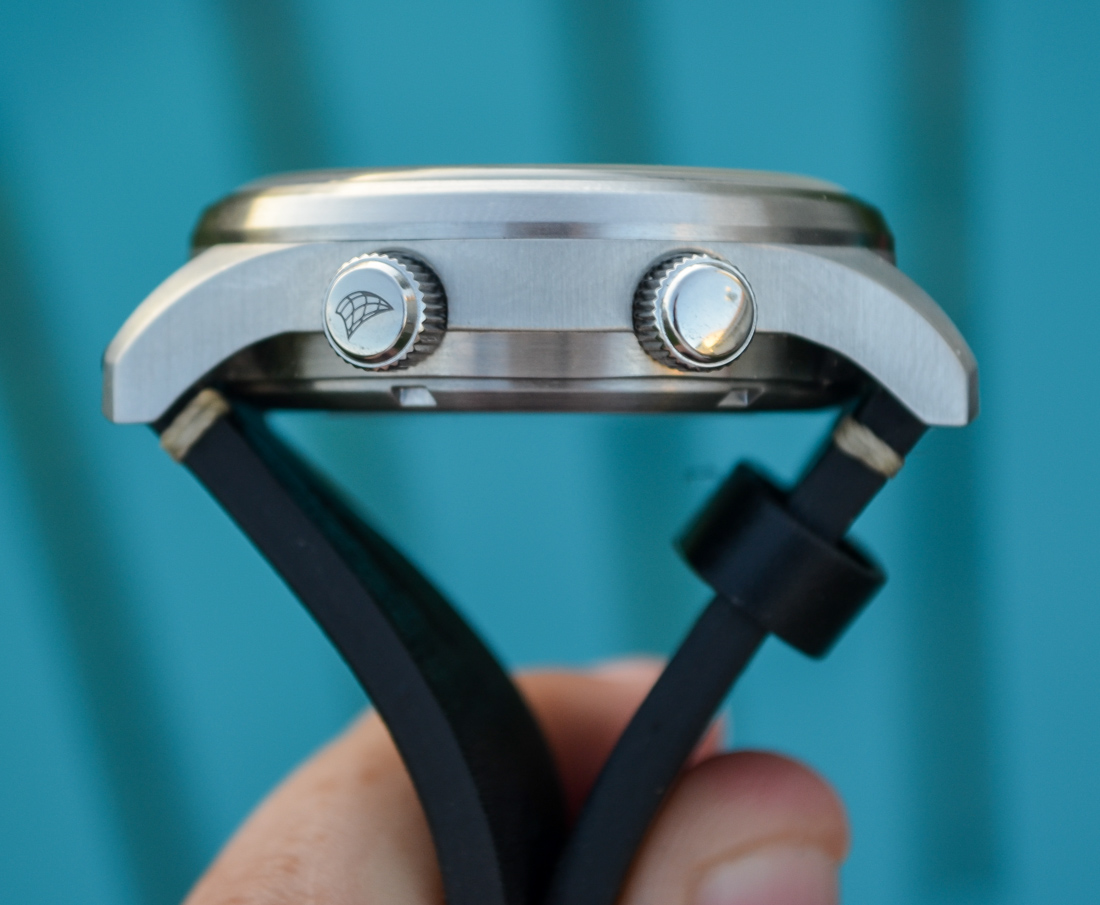 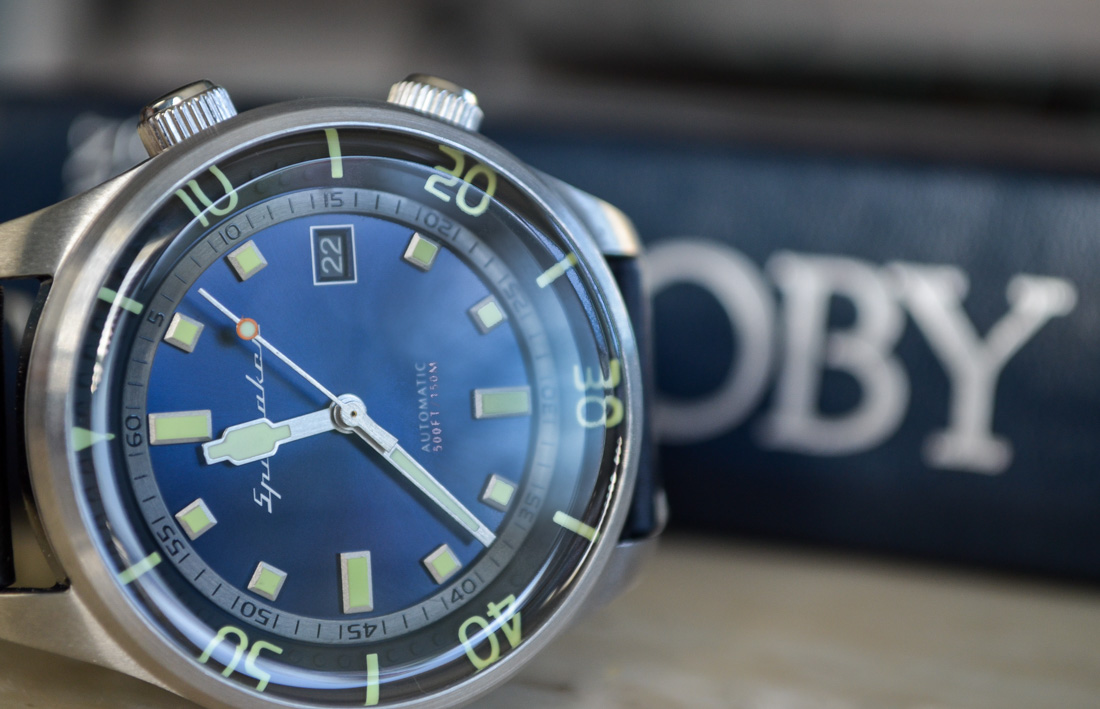 With that out of the way, the case is aesthetically pleasing. Every component of the case is brushed, save for the dual crowns that are both polished. The top crown, located at 2:30, controls the bezel, while the bottom crown, at 3:30, is how you set the date and time. I would have expected the dual crown to be intrusive since I wear my watches on my right hand, but because of the height of the case, they weren’t, and I many times found myself appreciating that little detail. Further, the case features a 150m water resistance rating, so it’s safe in the water – as it should be with “dive” in the name. 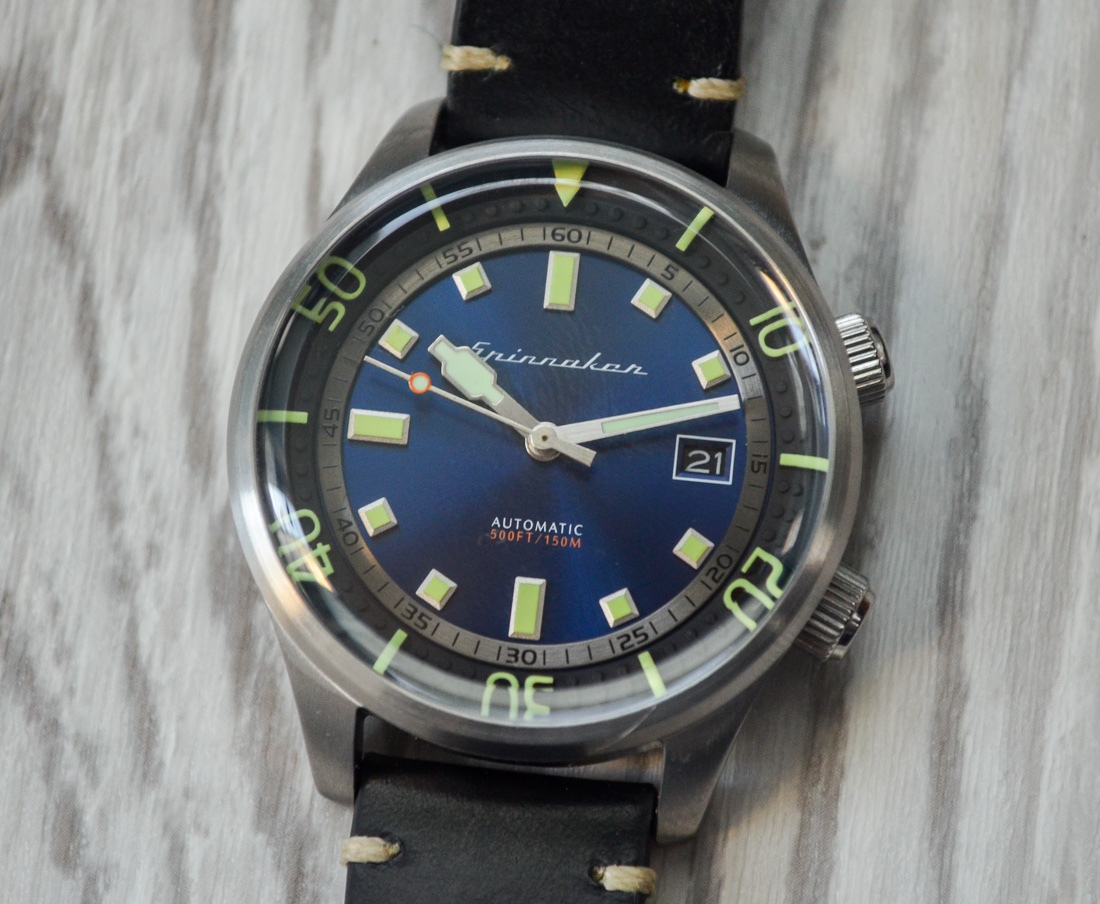 The dial is hands down the most attractive part of this watch and features the most character. The identifying feature of this watch is the wetsuit-influenced bi-directional rotating inner-bezel – which almost looked rubber in appearance. Controlled by the crown at 2:30, the wearer can adjust the bezel however they see fit. I am no diver, so I wasn’t exactly using it for its intended purposes, but I got a lot of joy out of adjusting the bezel. For one, it’s smooth and doesn’t click or jump like many vintage compressor bezels. It slides (and was incredibly satisfying to watch) allowing for some really fine adjustments. One thing to note though is that the bezel crown doesn’t lock, so I ended up looking down and noticing that it had twisted from the last position I had it in a few times. 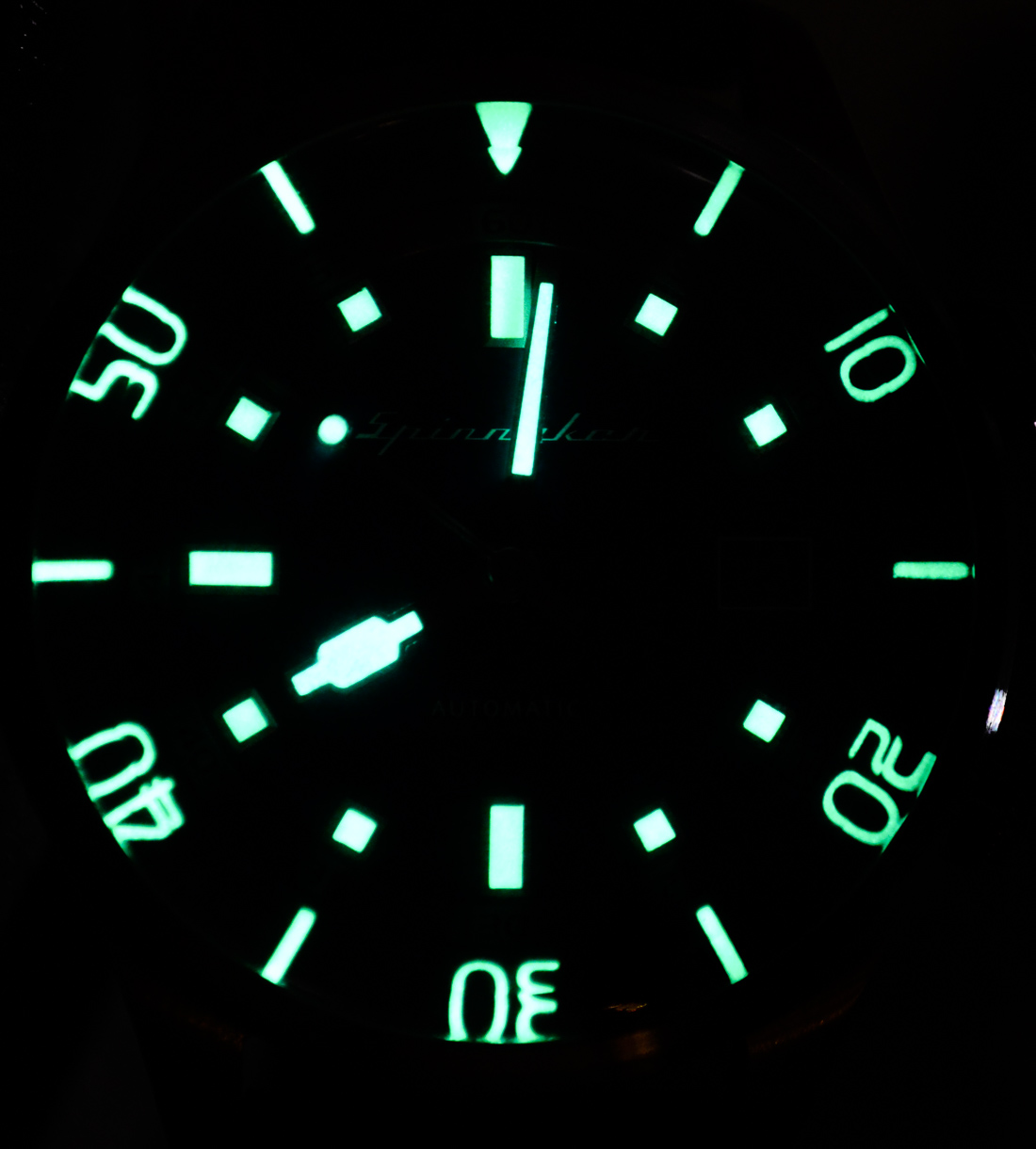 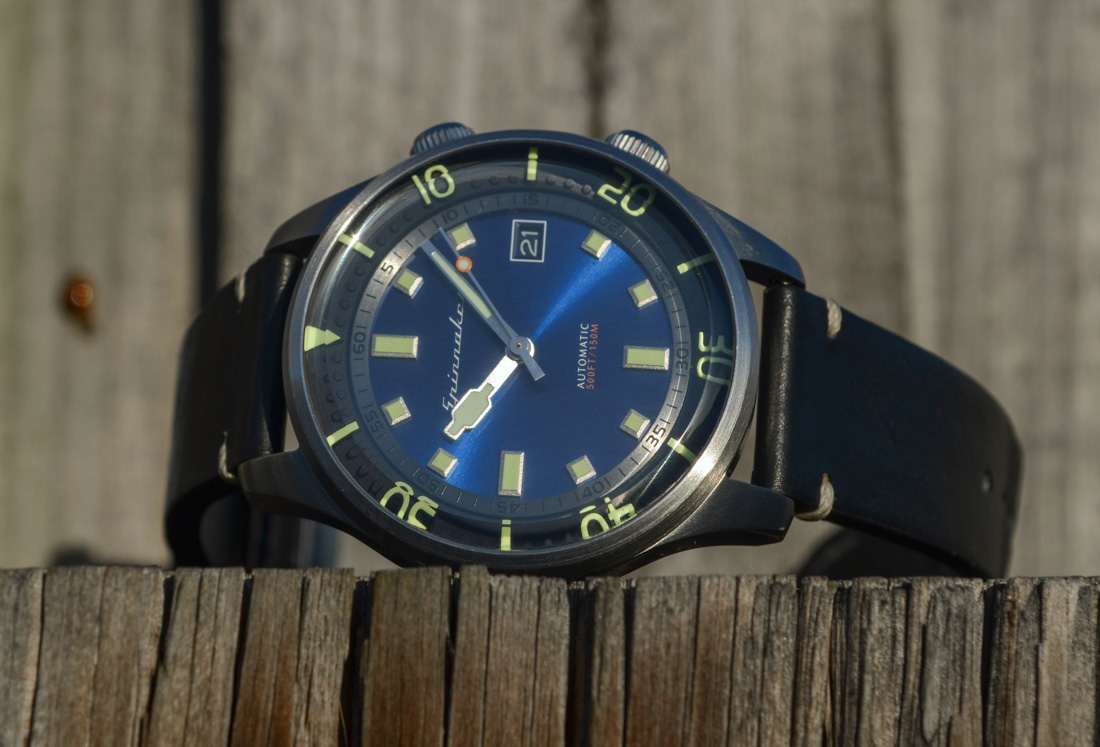 Moving in from the internal bezel is a slate grey seconds ring that frames the sunburst blue dial nicely. It also adds some extra contrast between the bezel and dial plate. As a side note, the reason I feel that’s important, is I don’t feel that the hour indicators and hands match the bezel stylistically. I can’t complain about the indices or the hands on their own, as they feel way above their price-point in quality and in lume, but with the bezel, they almost feel like two different styles that I just had a hard time jiving with. I think the circular indicators on the recent Spinnaker Hull would have fit the watch a little better. 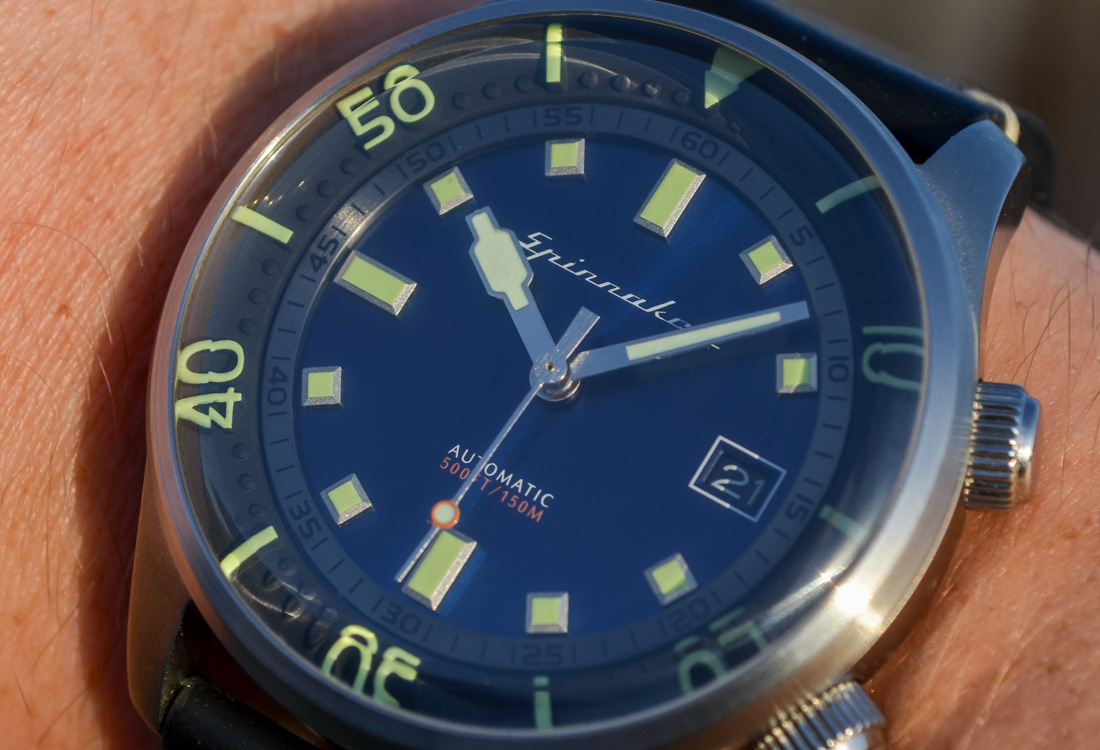 Moving on to the indicators and hands themselves, there isn’t much to complain about. The squared off indices contrast against the blue dial nicely, and I often caught myself trying to find some sort of blemish or impurity, as that’s typically the case with watches in this price-point, but I ended up coming up short. When I first received the watch, the dial reminded me of the Tudor Pelagos stylistically with how the hands and indices looked and behaved together.