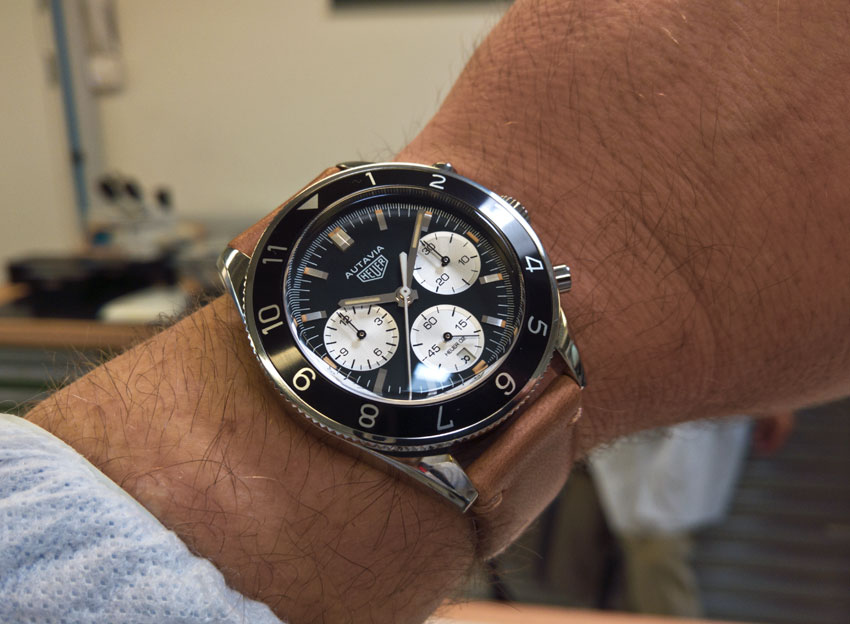 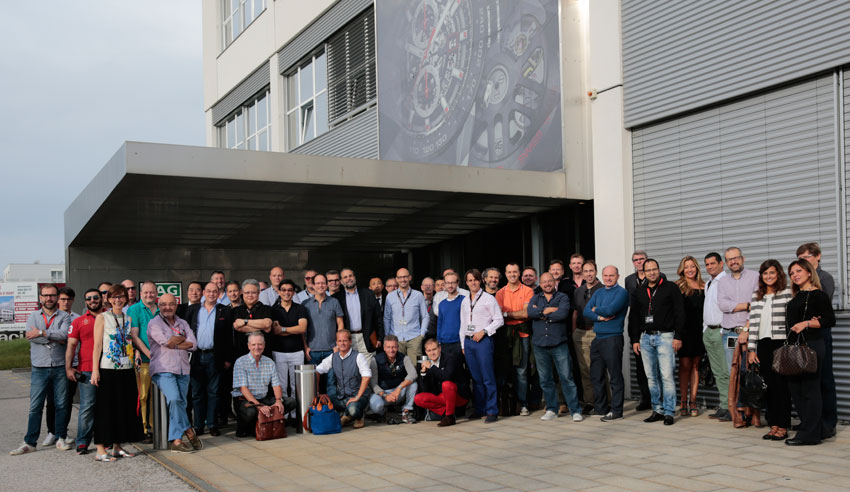 The two-day Heuer Collectors Summit was held this past Monday, September 12th, 2016, at TAG Heuer‘s headquarters in La Chaux de Fonds, Switzerland. It was the second edition of a similar summit held in 2013, with the idea to invite a handful of collectors to exchange ideas, experiences, and above all, share their pre-1985 beauties. Only this time, the enthusiastic collectors were joined by members of the press. Why? Well, you might have noticed that under Jean-Claude Biver’s leadership the TAG Heuer brand is changing. One arm of the historic watchmaker will be positioned in the past with a continued focus on heritage models, and the other will be duly focused on today with a focus on modern culture. In other words, the brand intends on serving its existing fans while at the same time attracting new ones.

A highlight of the Heuer Collectors Summit was a soft debut of the upcoming 2017 TAG Heuer Autavia reissue watch that came as the result of the “Autavia Cup” which aBlogtoWatch debuted here back in March of 2016. 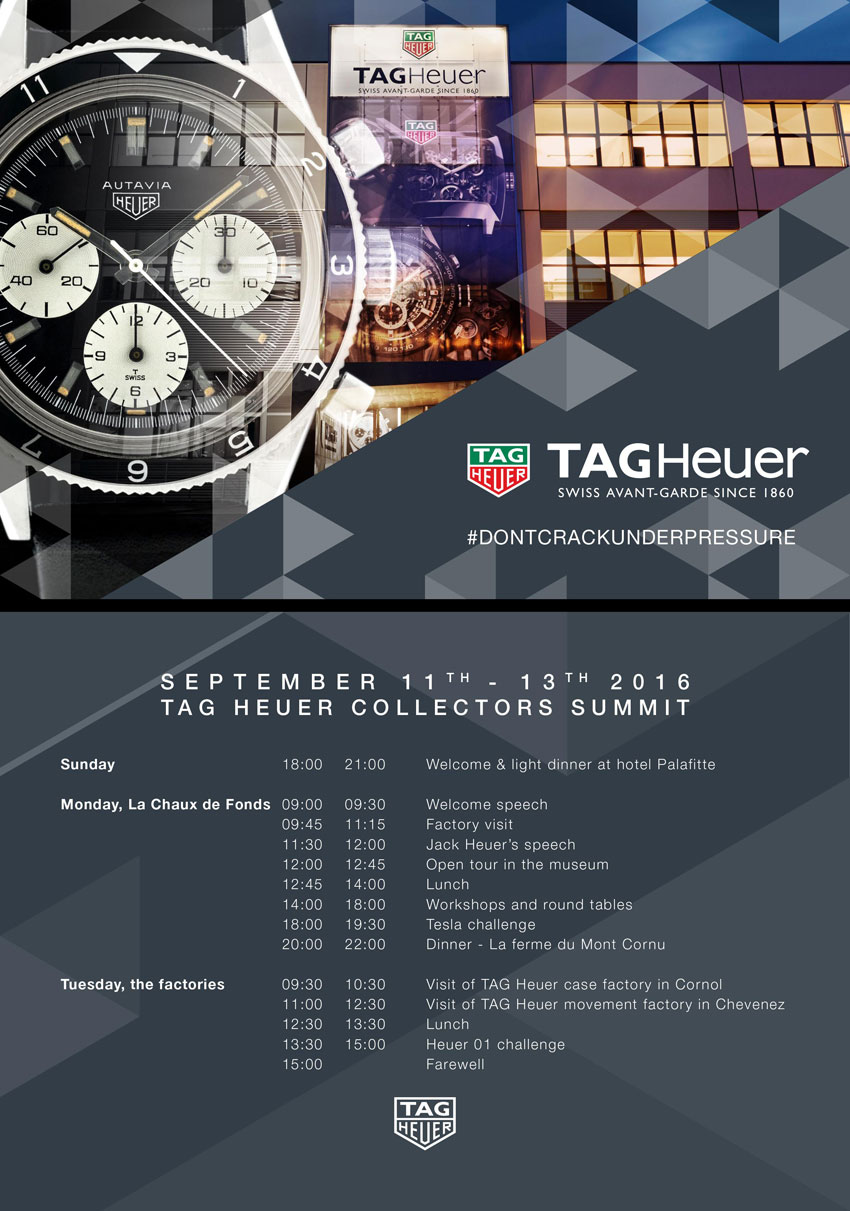 The summit included a visit to the manufacture in La Chaux de Fonds, the case factory in Cornol, and the movement factory in Chevenez. During our tour of the main manufacture, we saw the different stages of watch assembly, which are becoming more and more mechanized (efficient). In this particular segment of watchmaking, I personally don’t miss the “manual labor” aspect, nor do I consider automation as a “B category” of “real” watchmaking. Quite the contrary, in fact: the more industrialized the process, the cheaper it is to build, and the more precise are the final products. In other words, when done well, it means higher quality with higher volume. The outcome (as CEO Jean-Claude Biver had intended) is cheaper prices and a better perception on behalf of the end client. That goal is very doable, in my opinion. 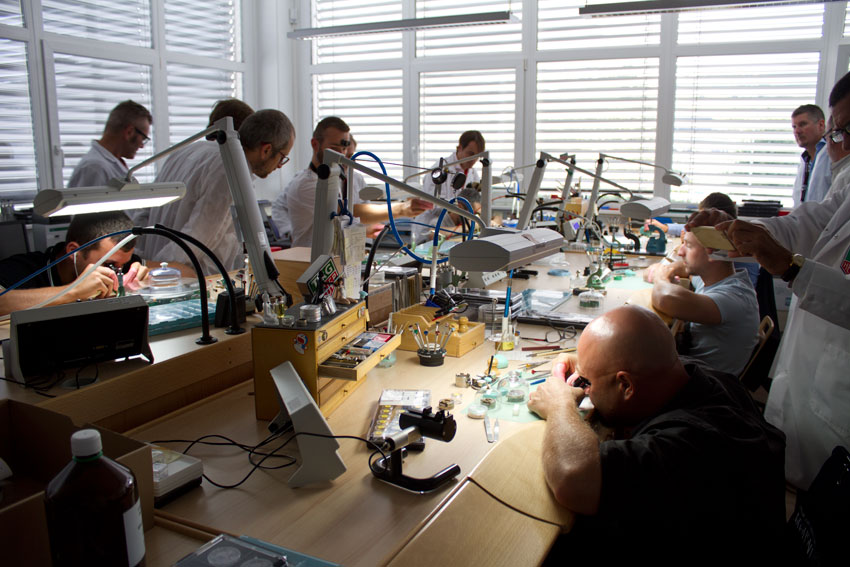 Odd! Visitors are wearing lab-coats, but not the workers.

The Heuer Collectors Summit was also an opportunity to try on some watches prior to the Biver era with models like the Carrera Mikropendulum and Carrera Mikrograph, watches which were responsible for deviating the brand from its target audience but which were great developments in their own right – and for the most part, abandoned. It has been reported that haute horology is dead at TAG Heuer. While there is less focus, this is not wholly true. Don’t forget the new Carrera Heuer-02T Tourbillon watch, after all. 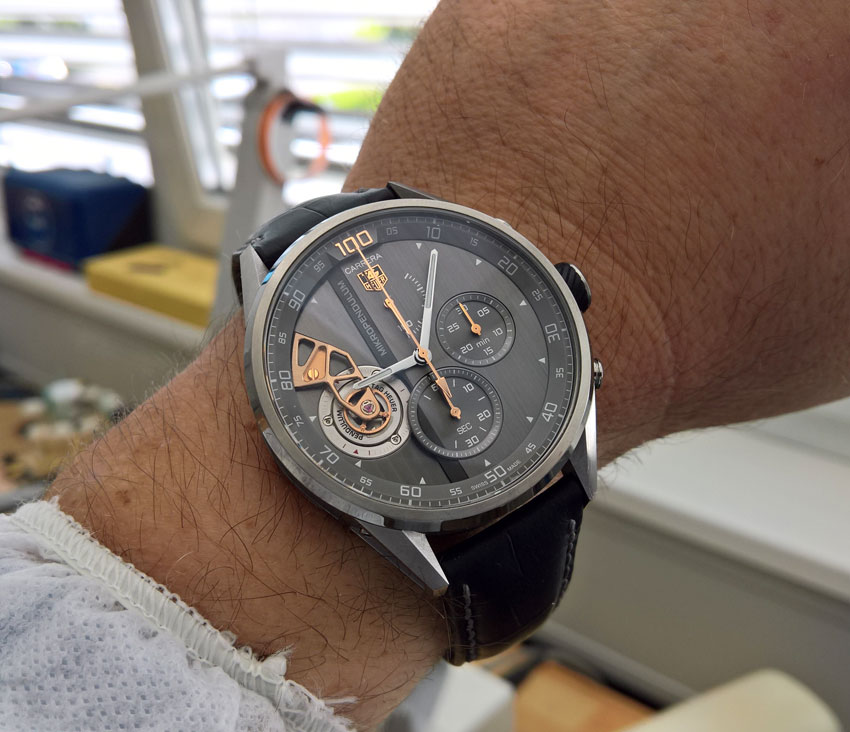 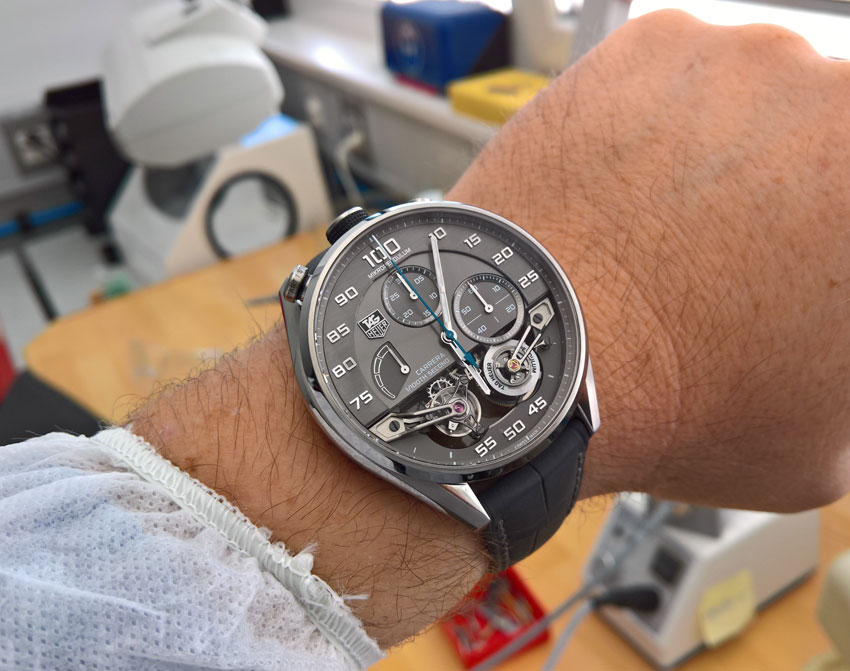 For me, the most interesting part of the Heuer Collectors Summit was touring the restoration room where the director explained the different procedures used to restore antique pieces. I saw a beautiful Mikrograph ready to be restored and even tried on a Skipper watch that belonged to the director. The most striking object in the room, however, was a safe packed with thousands of dials from discontinued models, guaranteeing restoration for years to come. 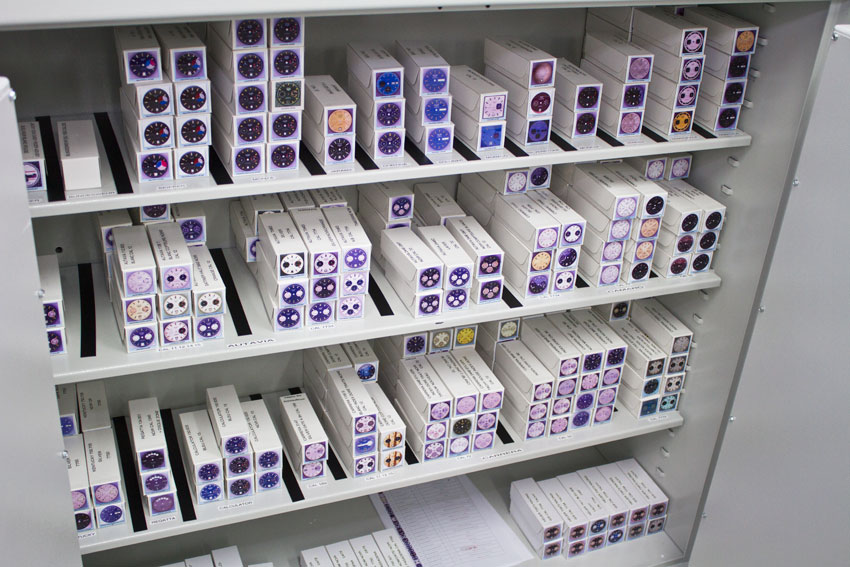 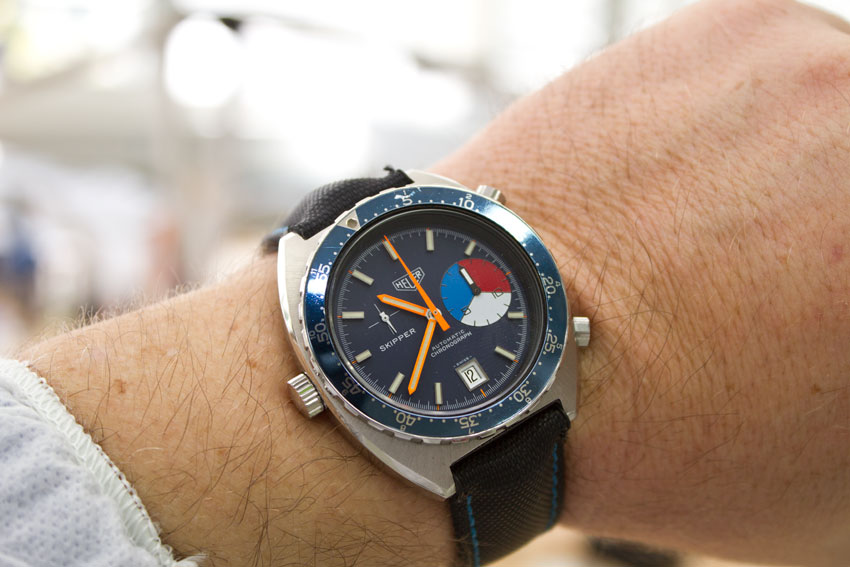 Jack Heuer – the spiritual “grandfather of the brand” – was on hand and talked to us about his life in a conference he entitled “Luck or Destiny?” On his wrist, Jack Heuer wore his Carrera 80, a special edition made for his 80th birthday in 2012 and the same watch he was wearing when Ariel interviewed him here. Looks like he found a keeper. 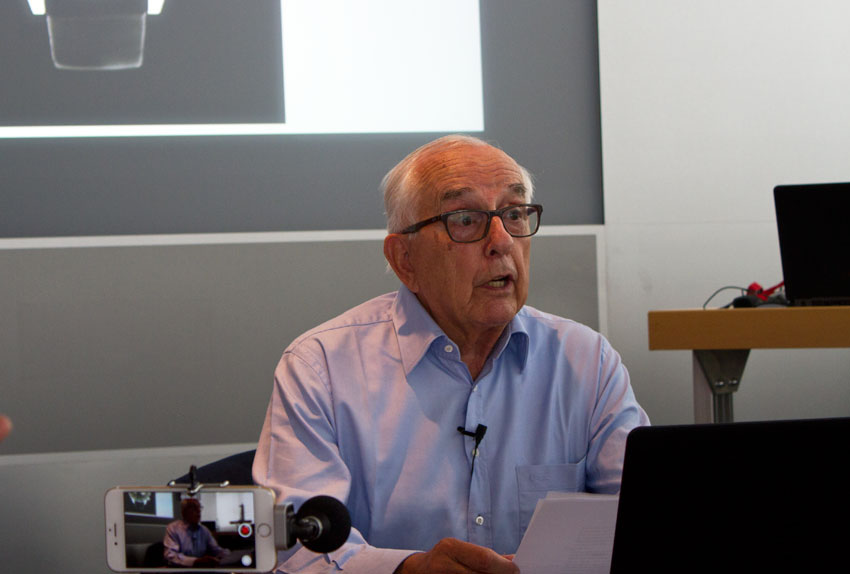 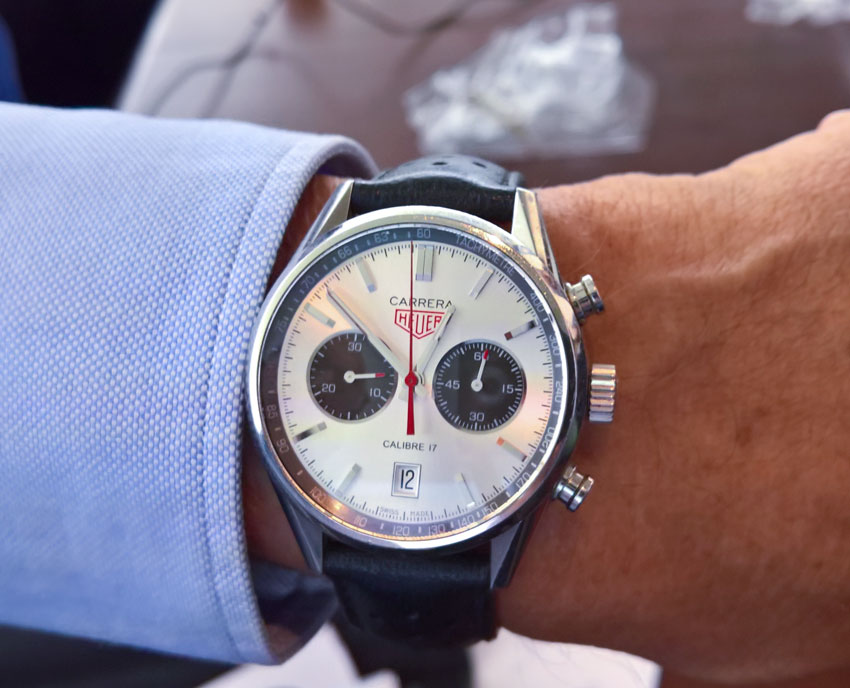 Yep that’s Mr. Heuer’s wrist. He is fitter than me!

The odd thing about the summit was the presence of so many journalists – especially web journalists – at an event that would normally not have generated much buzz in the press. So, why, we asked ourselves, had we been invited to a collectors’ summit? The answer came towards the end of our visit to the manufacture when we got to see the new TAG Heuer Autavia 2017. 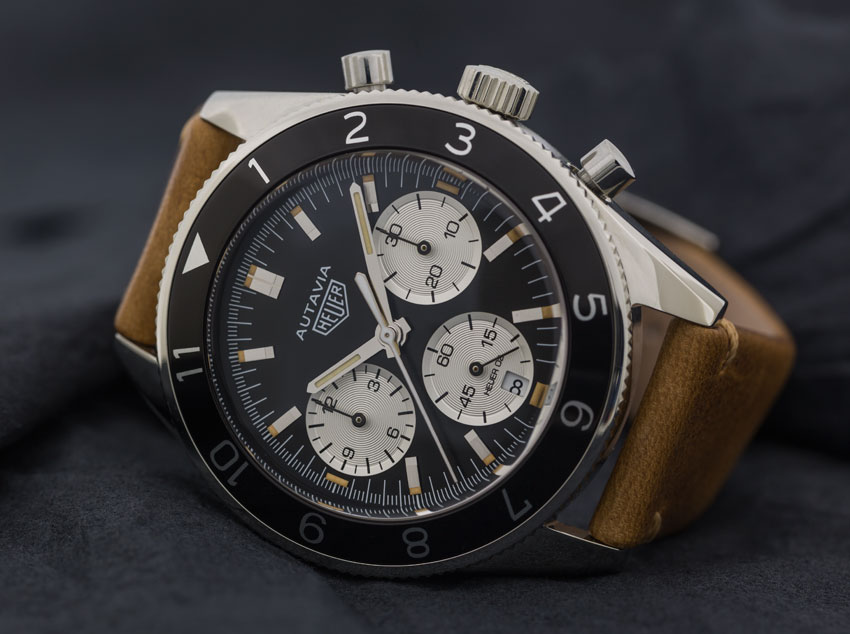 The official picture of the still unfinished TAG Heuer Autavia watch that will be released in 2017.

If you recall, last March TAG Heuer launched a campaign to “elect” the new Autavia (linked to above). After three rounds of online voting from the public, a winner emerged: the Autavia Reference 2446 Mark 3 – also known as the “Rindt” Autavia. We learned at the Heuer Collectors Summit that the collectors were also consulted during the campaign and voted for a manual chronograph without a date. Well, contrary to what they proposed, the new TAG Heuer Autavia 2017 will be fitted with an automatic movement and a date window at 6 ‘clock because, as we were told during the presentation, the consumer prefers these characteristics. Let’s assume that for the final version the date numerals on the disc will be oriented properly. 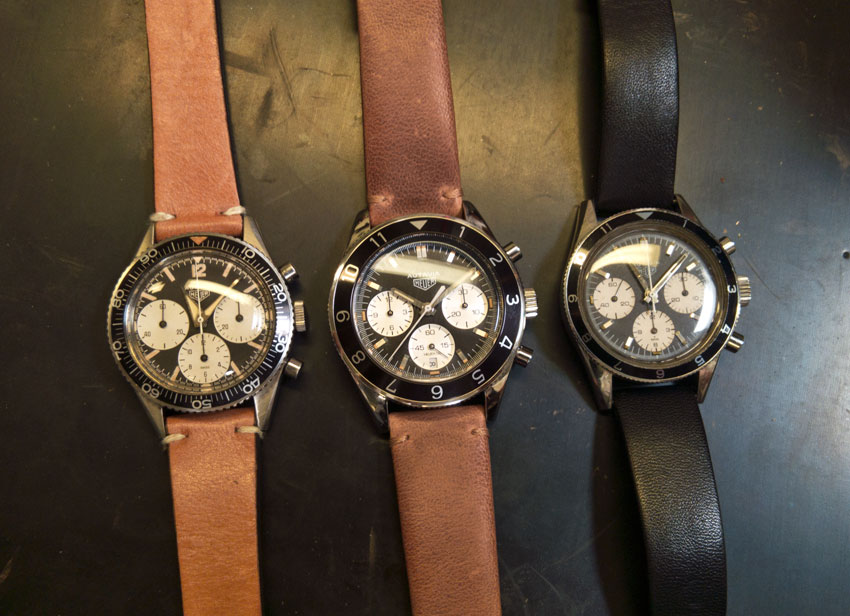 The new TAG Heuer Autavia (center) with his predecessor (right)

With that said, CEO of TAG Heuer Jean-Claude Biver told me that they didn’t want to make an exact copy of the original because that would devalue and delegitimize it. So, what was the real reason behind the new Autavia’s configuration? To manufacture a tribute model would have been very expensive because, for starters, TAG does not do manual chronographs and, what’s more, it wouldn’t be in line with the now recovered old brand’s philosophy which has never been elitist. So I guess there’s truth in both approaches. What will be the most exciting thing for most modern TAG Heuer watch lovers is the movement inside of the new Autavia. 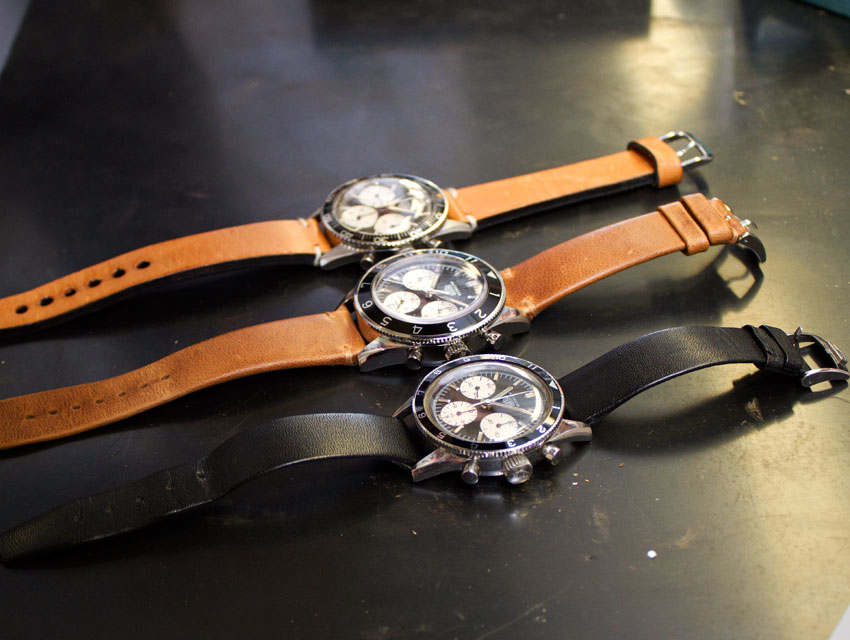 The case has a diameter of 42mm (the original was 38mm) although the thickness of the case has yet to be determined because the caliber isn’t finished yet, but it should be around 15mm thick. After its official launch at Baselworld 2017 there will be plenty of time to take a closer look at the watch, but we do know that the model will be powered with the new Heuer-03 caliber, a direct descendant of the sadly aborted CH80 caliber. This movement was originally named the Caliber 1969 and later the CH80 that was to debut in the stillborn Carrera CH 80 watch in 2014 (hands-on here). If you can look past the date window, the watch is pretty cool and will be delivered on a leather strap or a metal bracelet. 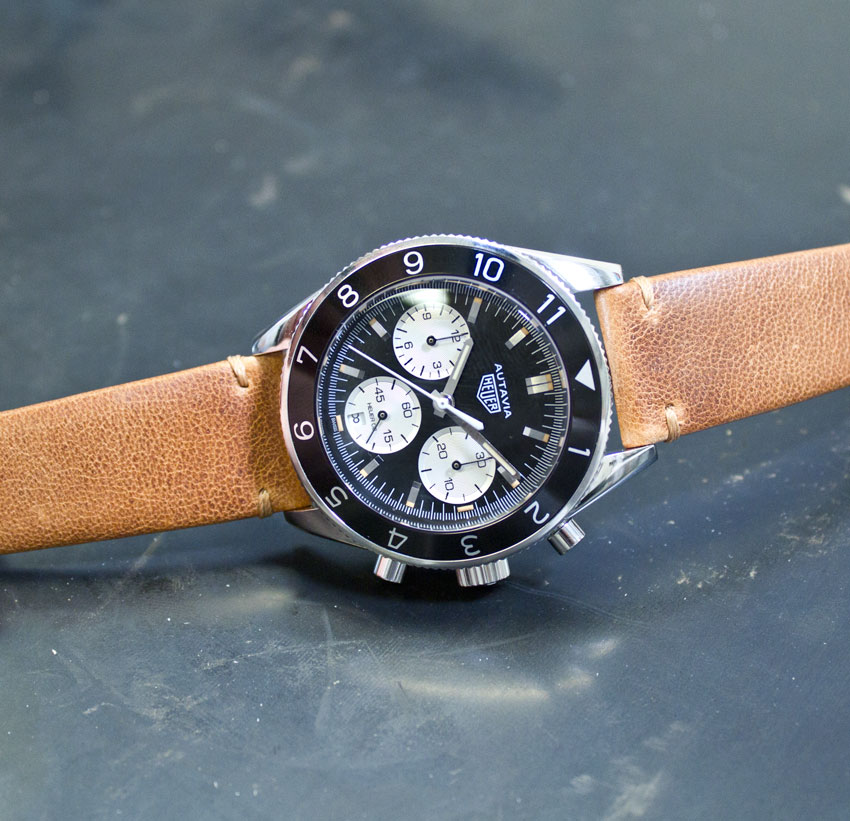 Accustomed to the secretive nature of the watch industry in general, it was refreshing that the Heuer Collectors Summit was open to the press and that we got to see a model that won’t be ready for another six months. But let’s not be naive: there is a very clear explanation behind the invitation and the idea is to generate as much buzz as possible around the launch of the Autavia to whet the appetites of TAG Heuer fans. It reminds me of how Apple used to “forget” iPhone prototypes at Starbucks prior to the launch of the product – free advertising, basically. Having said this, let’s hope that TAG produces enough stock to meet demand, unlike the current situation of scarcity for other models of the brand. Scarcity is indeed an asset, but it can quickly become a liability.

The TAG Heuer Autavia is going to sell extremely well because the expected price is very attractive at CHF 4,800 with a leather strap and CHF 4,950 for a steel Milanese bracelet. That’s about the price you’d pay today for a watch with a Valjoux 7750 movement, but in this case you are getting a cool neo-vintage chronograph with a manufacture movement. tagheuer.com