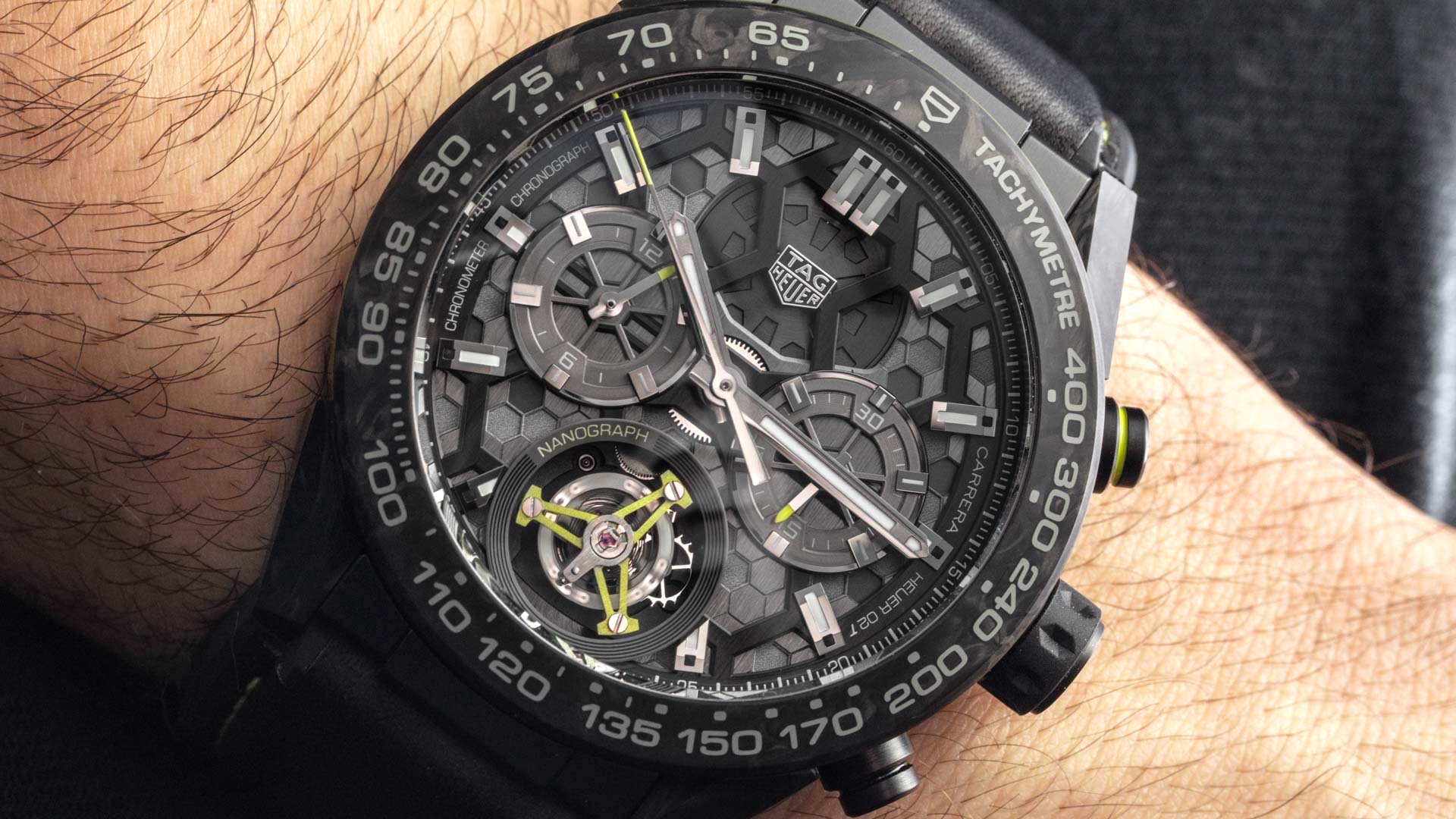 Presenting in Switzerland during “Geneva Watch Week 2019,” TAG Heuer had just one new product to debut: the Carrera Calibre Heuer-02T Tourbillon Nanograph. A variation on the existing TAG Heuer Carrera Heuer-02T Tourbillon Chronograph (aBlogtoWatch review here), the Nanograph is more than just a cosmetic novelty of the brand’s excellent-priced Swiss-made tourbillon. In fact, the Nanograph shows off a new component technology that could find its way in many other TAG Heuer and LVMH Group watches — with the potential to be highly disruptive in the mechanical watch-movement component space.

While the technology that goes into the Nanograph’s regulation system is ready, TAG Heuer still isn’t quite sure how to talk about (market) it yet. “Nanograph,” as a name, isn’t ideally suited to help understand this product’s appeal, and there is, as of now, no trademarkable name to identify the particular material and hairspring (spiral, or balance spring) TAG Heuer has developed and that distinguishes this timepiece. That means all but the most keen and sophisticated consumer will likely miss the main point of this interesting new watch and regulation-system technology. 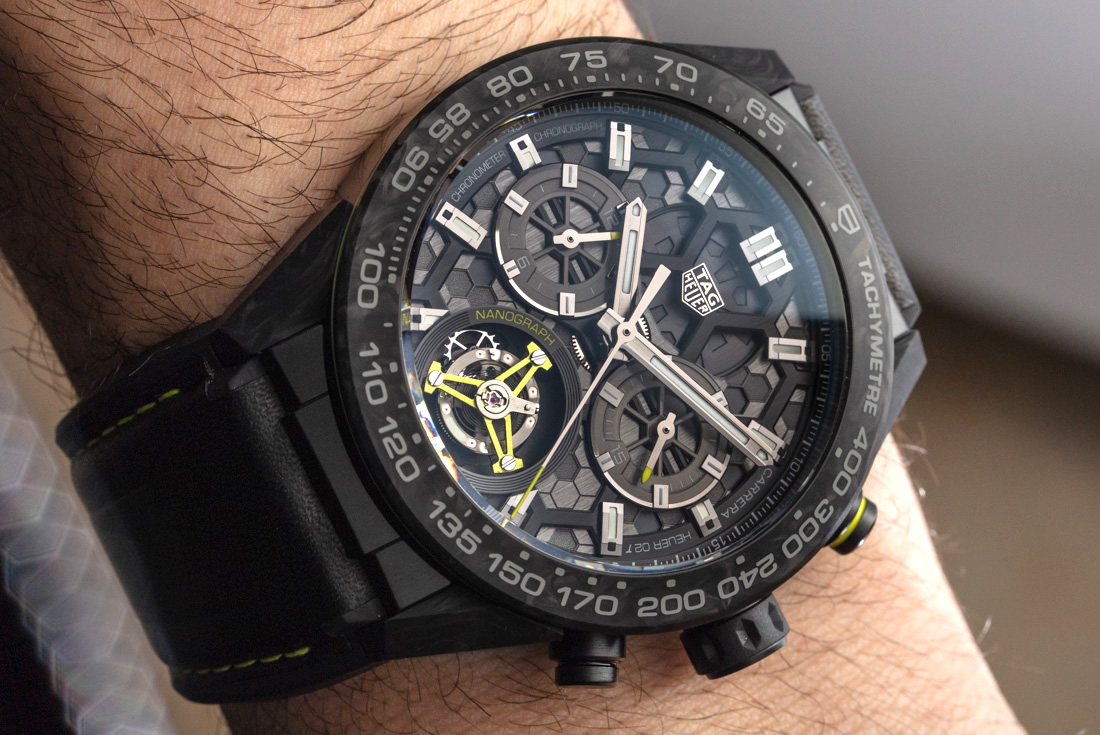 The scene in TAG Heuer’s private suite at the Kempinski hotel was designed to generally impress watch media in classic TAG Heuer style. A large screen displayed an exciting visual animation, complete with high-tempo music; periphery that included a microscope and a whiteboard with math equations flanked my seated meeting with Mr. Guy Semon — the real star of the show here, from a talent perspective. 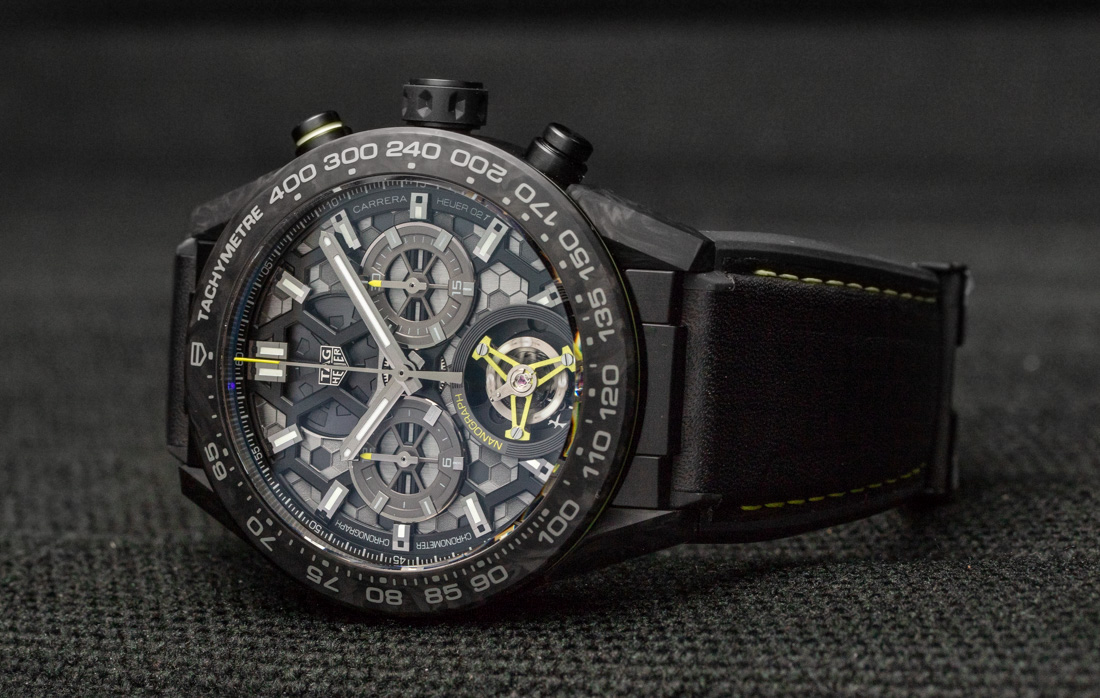 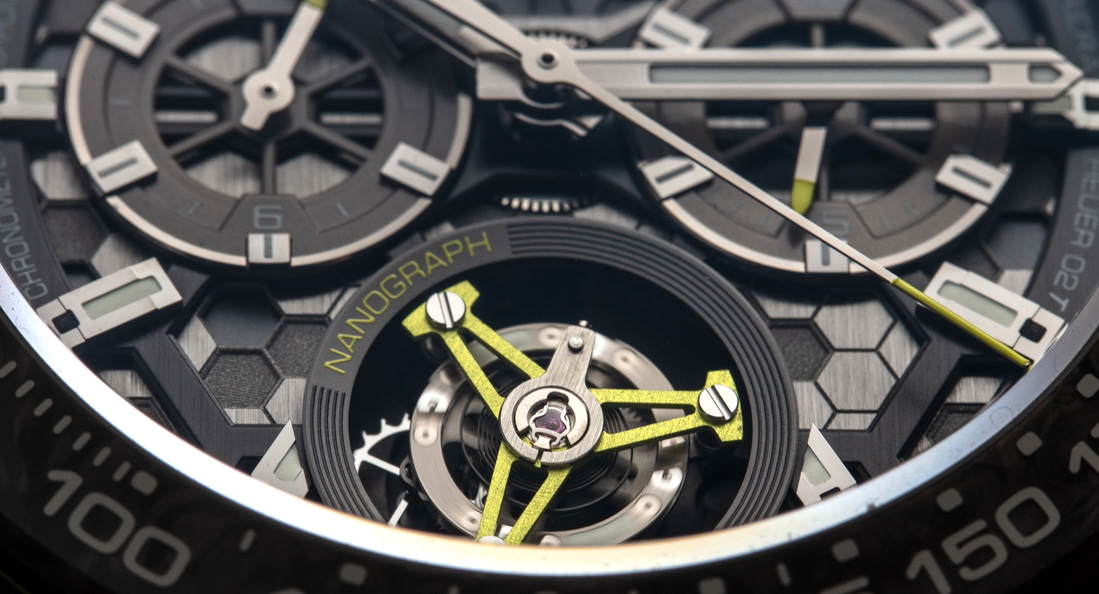 Guy Semon has been with TAG Heuer and the LVMH Group for well over a decade now, originally brought in to the brand to make the TAG Heuer Monaco V4 watch series actually work. During the Jean-Claude Biver era, Semon’s focus on developing novel technologies for an industry sorely in need of regular innovation was noticed as being quite important. A showman and product guy, Biver quickly realized that people like Semon needed resources and a platform to “do their thing,” which would ideally lead to results that can be scaled for use in actual watches industry-wide. 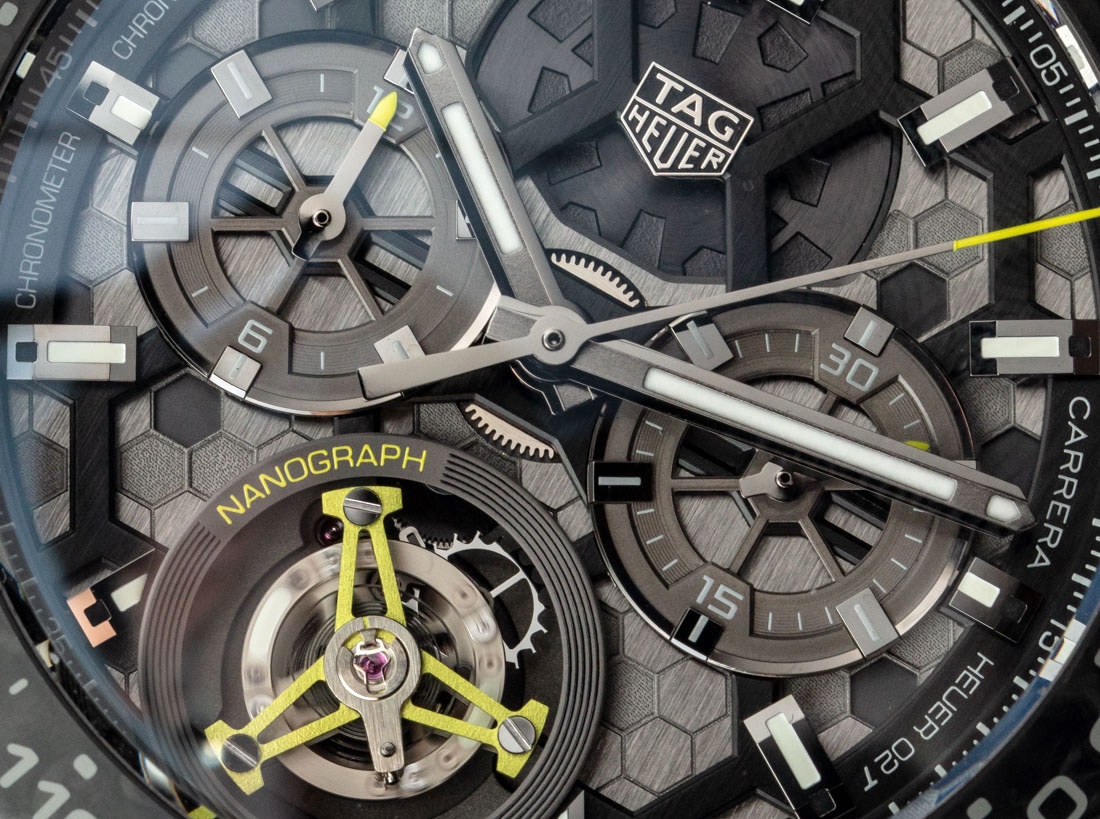 Guy Semon was lucky enough to have a university-style laboratory set up for him under the LVMH Watch Division, where this quiet and deliberate-speaking engineer (despite his club bouncer-like room presence) was free to experiment and test. One of the first major projects I heard about was Semon’s investigation into silicon. The watch industry is very interested in new materials that can be used to solve old problems in traditional mechanical timekeeping. Silicon has a number of benefits over metal parts — but it has two principle weaknesses as well: the challenge of mass-production, and relative fragility, which can make shock-resistance problematic.

While silicon is still an important material for today’s modern watchmakers, it is not the “grail material” everyone hoped it would be, especially with regard to the production of hairsprings (the most difficult part of a watch’s movement to manufacture). Semon thus set his sights past silicon for other materials and techniques to produce hairsprings that could outperform and under-price the metal alternatives out there. It also needed to be as good as, or better than, silicon. 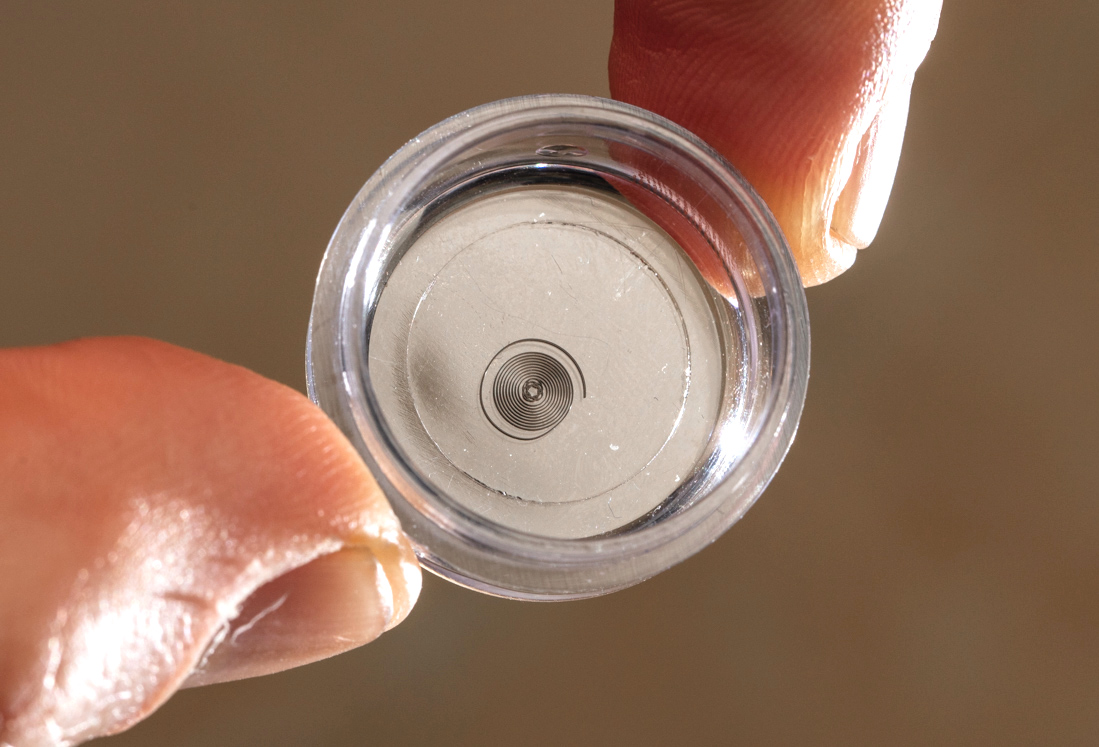 Simply referred to as a “carbon hairspring” (which is true), the innovation in the Carrera Heuer-02T Nanograph is the hairspring which, to the naked eye, appears as ordinary gray in color. This hairspring is the outcome of Semon’s patient efforts to explore a hairspring material and production technique that might eventually replace both metal and silicon, and not just in expensive watches. What this particular carbon polymer has as an advantage over silicon is its simplicity for mass production (lower rejection rates due to broken parts) and more shock-resistance, because of its native elasticity. 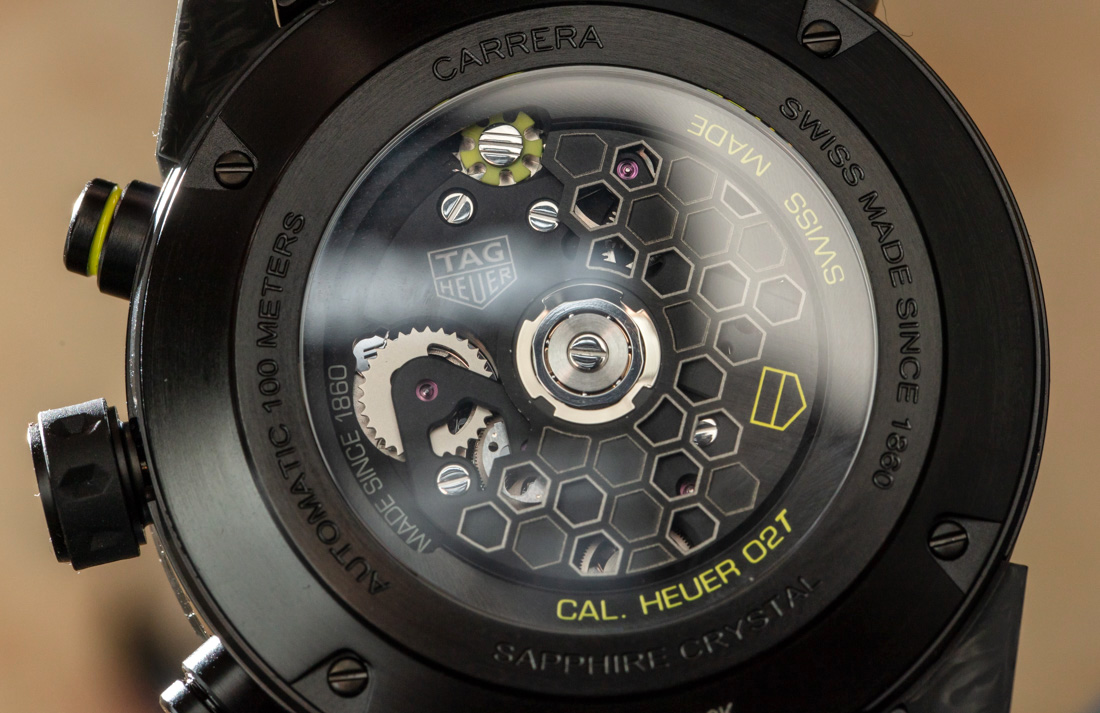 Like silicon hairsprings, the carbon hairspring benefits from being both crystalline (for hardness) and flexible (due to its nanotube structure). It is this nanotube structure of the material that lends itself to TAG Heuer’s “Nanograph” name for the watch. Another benefit to the elastic nature of the this hairspring is that it can be more easily adjusted for a particular movement, which means, from an industrial standpoint, watches with carbon hairsprings will be easier to assemble and regulate for accuracy. 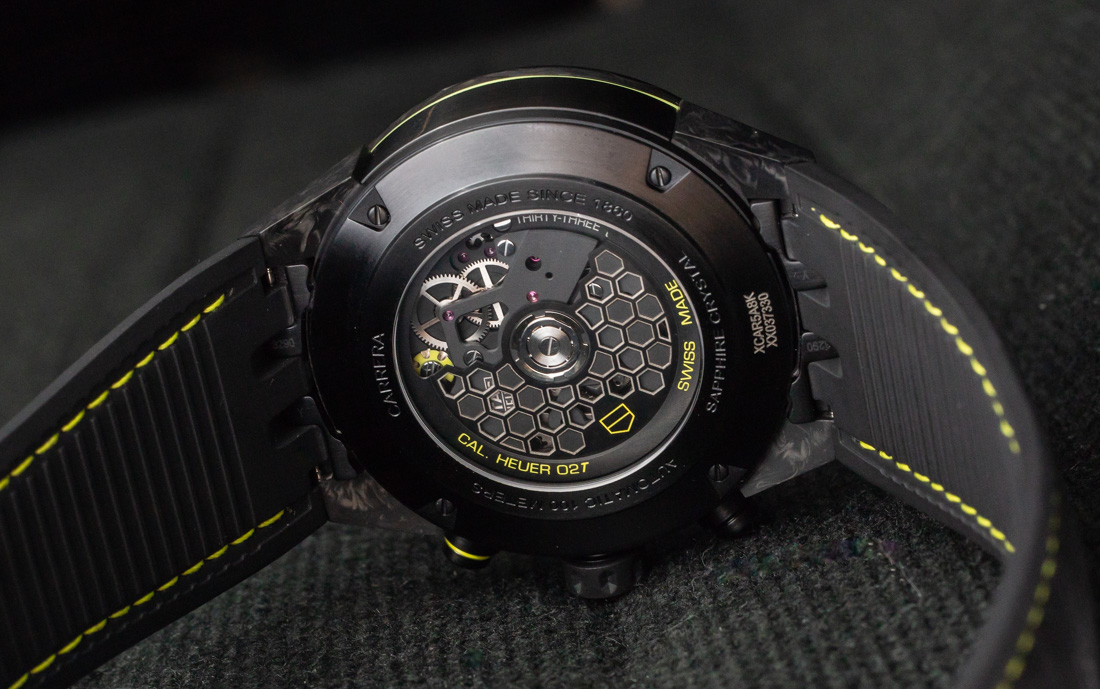 The new regulation system in the Nanograph watch uses the carbon hairspring, as well as a steel and aluminum element for the balance wheel. The anodized aluminum parts can be colored — which adds a degree of fashionability to the products. It’s shown here in lime green, along with the two small sections of lume-painted material in the regulation system (something you don’t see very often). Semon shared with me that, without much effort, the carbon hairsprings could easily replace metal hairsprings in a series of existing movements without other appreciable changes to the movement in order to have them operate correctly. This means that moving forward, LVMH might make a business out of selling these carbon hairsprings to others, as well as being able to use them in movements that aren’t exclusively designed to use them. 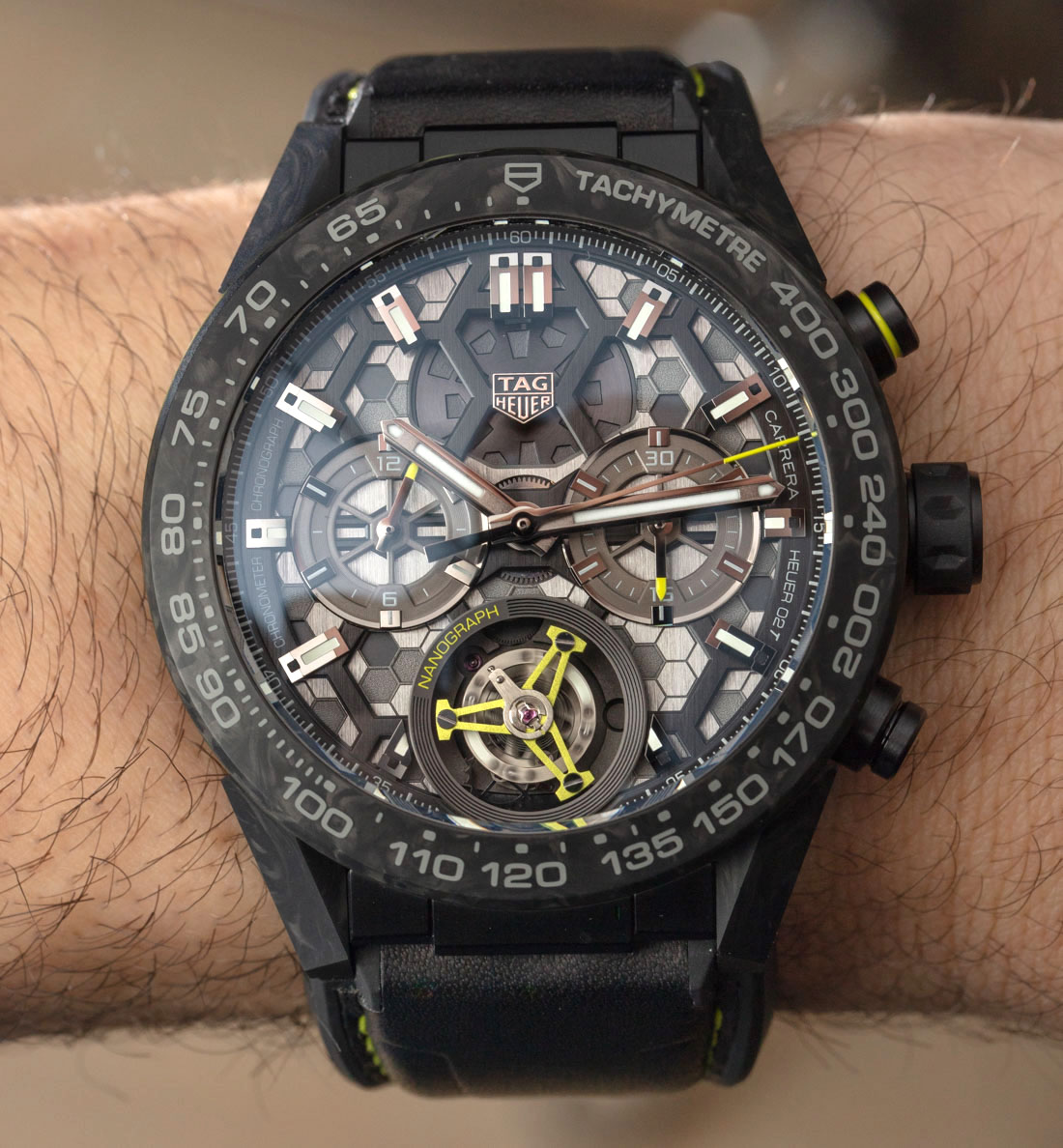 At this time, the Carrera Heuer-02T Tourbillon is the most exclusive product produced by TAG Heuer — which is why the carbon hairspring probably made its debut here. That said, TAG Heuer’s tourbillons remain the best value on the market, if you want a high-performance Swiss-made tourbillon. It is roughly 1/3 the price of many competitor Swiss-made tourbillons. You do lose hand-finishing for the tourbillon parts, but these Chronometer-certified and durable tourbillons have one-upped so much of the competition it isn’t even funny. Prices for these TAG Heuer Tourbillons start at about $17,000. 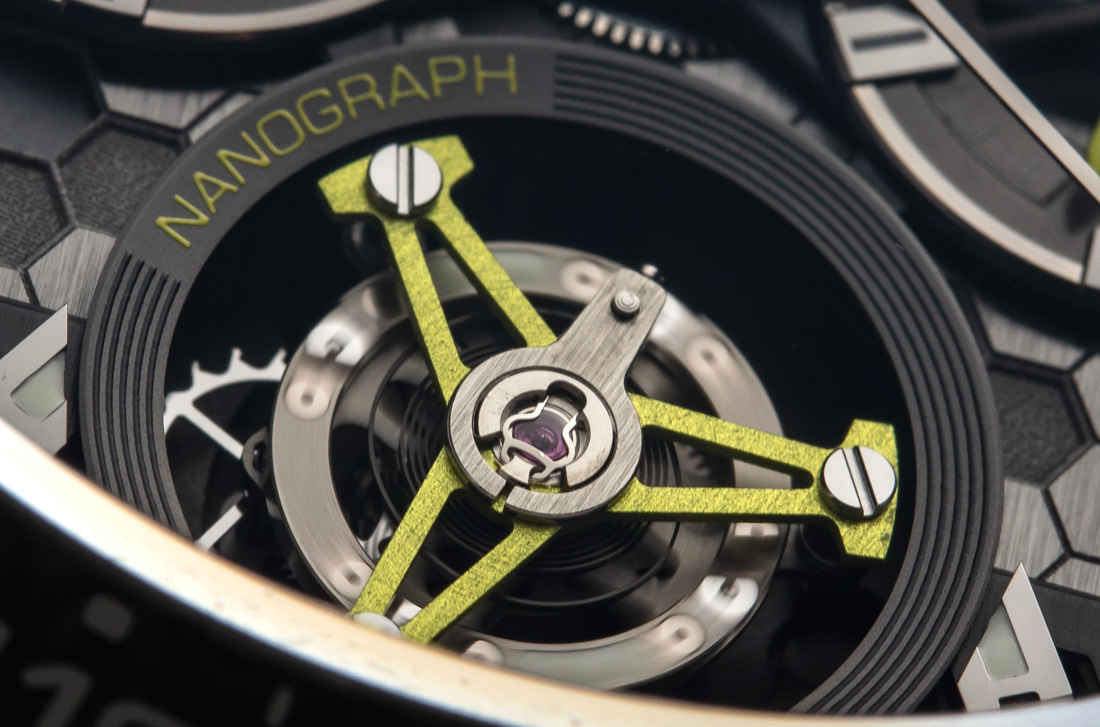 The Carrera Heuer-02T Tourbillon Nanograph is a bit more expensive, but not by much. The futuristic design, with its repeating hexagons, is an homage to the construction of the carbon hairsprings, as is the use of carbon for the 45mm-wide Carrera case material. But again, if you didn’t know about these little nuances you’d think the watch was designed for a soccer (football) fan. The 100 meter water-resistant case (capped with sapphire crystals) is produced from mostly PVD black-coated titanium, along with forged carbon for the bezel and lug structures (as well as for parts of the strap-deployant buckle). The overall look of the Nanograph watch is fun and spirited — but not for everyone, and that’s by design. It also isn’t a limited edition, as far as a I know. It’s almost certain that TAG Heuer will come out with more watches that utilize these carbon hairsprings in the near future. 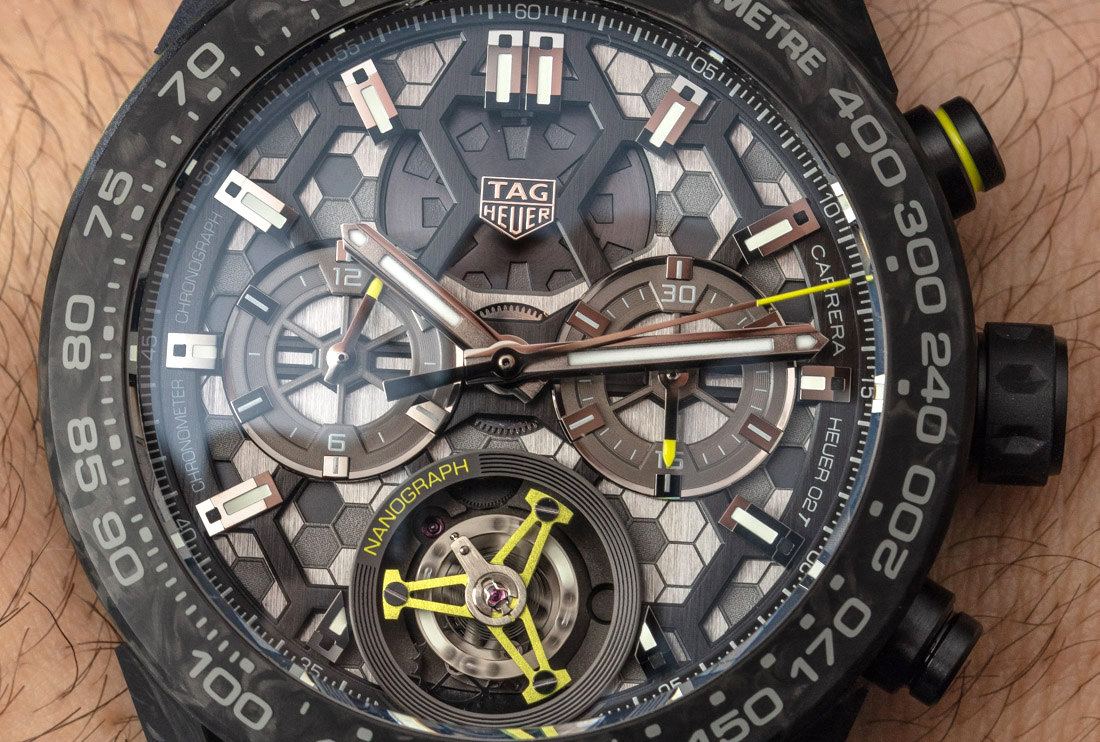 Inside the watch is the in-house-made TAG Heuer Calibre Heuer-02T automatic tourbillon chronograph. Operating at 4Hz with 65 hours of power reserve, the movement features the time, as well as a 12-hour chronograph. Again, this is an exceptionally high-performing (accurate) movement in the context of other tourbillon-based mechanisms. 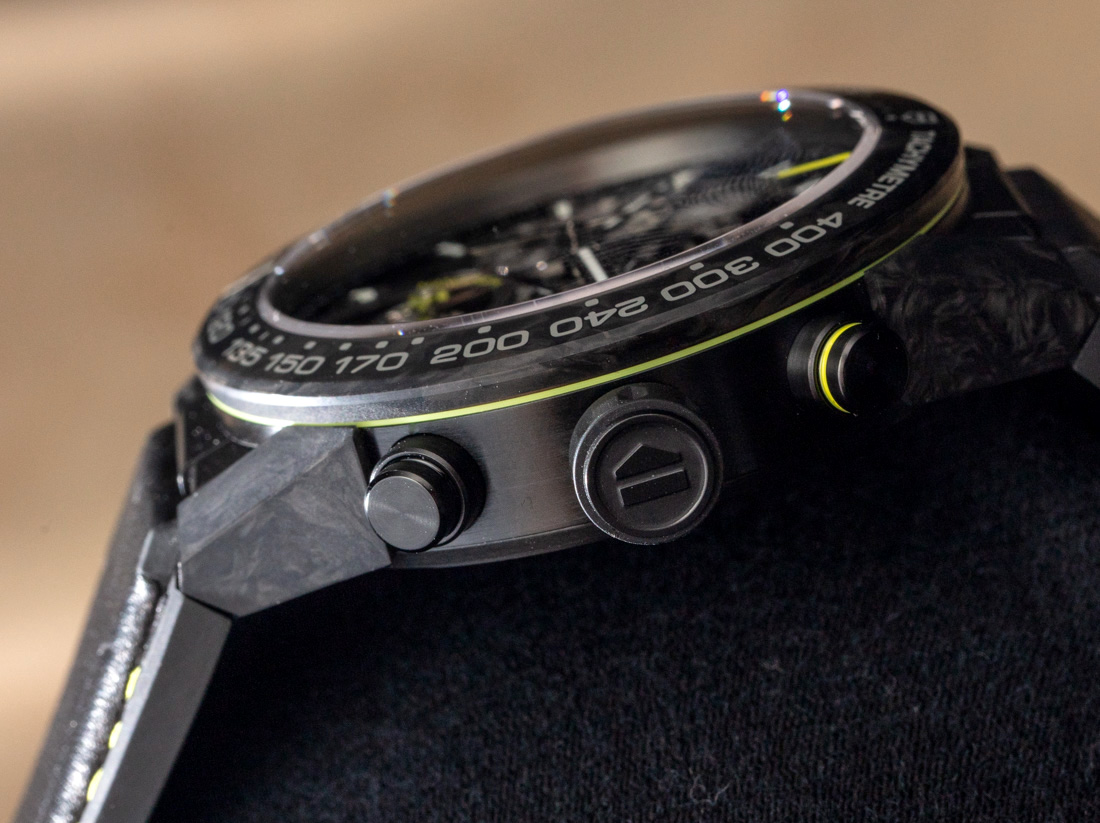 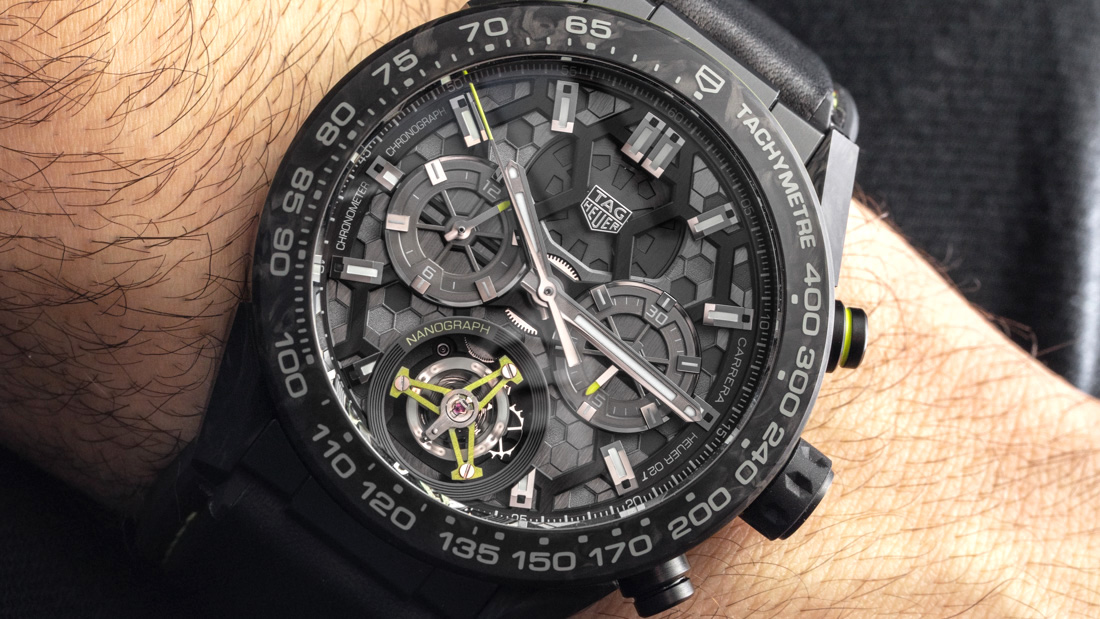 I look forward to telling more of the story of TAG Heuer’s innovative new carbon hairspring technology, as I think it will have applications for less exotic watches very soon. Guy Semon’s lab is an impressive part of the LMVH Watch Group universe, and collector-intended products like the reference CAR5A8K.FT6172 TAG Heuer Carrera Heuer-02T Tourbillon Nanograph are a great way of showing off and debuting some of his many achievements. Price is $25,500 USD. Learn more or order at TAG Heuer’s website.