The Sinn U1000 Watch Has Risen From The Depths

Sinn’s new EZM6 diving watch, the U1000 has finally arrived. The watch’s specs have been circulating for a while, but not until now have pictures of the watch been available. The Sinn U1000 should hit retailers in March 2008, and Sinn is obviously going to make the U1000 the highlight of their display at Basel World this year. Sinn, based out of Frankfurt Germany just keeps on making lusted after timepieces.

Last year, Sinn gave us the 757 and 757 UTC models which share a bit of the design theme of the U1000. The major difference being that one is a pilot’s watch, while the other is a diving watch. The 757 series gave us a stunning design with remarkable functionality, but the U1000 really takes it to the next level. Starting with the movement, Sinn uses a chronograph movement based on the ETA Valjoux 7750, with some serious modifications. Most importantly is the ability of the movement to survive and remain accurate under extreme conditions, and the alteration of the minute counter window. The Valjoux 7750 uses a 30 minute counter, while the Sinn U1000 is able to display a full 60 minute counter making the elapsed minutes easier to read, especially at a glance.

Sinn designed the U1000 to be the ultimate mechanical diving watch, and for most intensive purposes it is. The hull of the watch is made out of Tegimented submarine steel. The tegimentation process gives the steel a bit of a sandblasted look and makes it much harder, which adds a serious scratch resistance to the watch case. This treatment is most notable on the bare steel version, and gives the PVD model an attractive matte finish. People with existing Tegimented Sinn watches remark on how after lots of wear, the case still appears brand new. WatchTime magazine mentioned how Sinn watches are the super watches of the watch world in regard to their ruggedness and reliability. 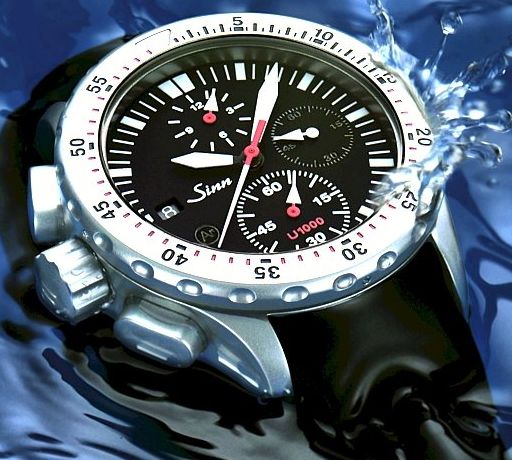 This is not a lefty watch per se, even though the crown and pushers are on the left side of the watch. The purpose here is to protect the watch from damage that would make the watch inoperable. Placing the crown and pushers on the exposed side of your wrist makes them a bit more vulnerable to being hit. While it is uncommon that one would hit the watch in such a way as to make it inoperable, Sinn is taking the extra step to ensure maximum reliability for the U1000. Logic aside, this watch can do things no human can do. For instance, the U100 will operate with normal accuracy at temperatures chilly at -45 degrees C to 80 degrees C. Further it can be submerged to 1000 meters and keep perfect time. Many question the usefulness of such depth capacity. True, at 1000 meters no human could survive, even in today’s most advanced diving suits. And if anyone is that deep in a vessel, it is surely pressurized. Well part of depth rating is a bragging right. Another Sinn model, the UX, boasts unlimited depth. Basically you could drop it to the bottom of the ocean, which at its deepest is about 7 miles deep. Good luck trying to fetch it though. Sinn simply likes super watches, and you will no doubt appreciate wearing a watch that will outlive you, and your children. The Sinn U1000 actually has many more features not mentioned here, but that you will likely never see or appreciate. Simply know that you can toss it around liberally.

The modern evolution of Sinn watches seem to be taking the company in the direction of making watch instruments. The style and fashion statement here, is that you can take the watch anywhere. They flourish in the German ideal of highly functional engineering. And if there was ever a Porsche of watches, it would be Sinn. A no nonsense design that looks good because it is clean and functional without being tedious, boring, or generic. Look for the Sinn U1000 watch available soon, for about $4500. Available with or without a PVD finish, with a rubber strap and optional steel bracelet. The U100 is my choice for the most desirable Sinn watch now available!