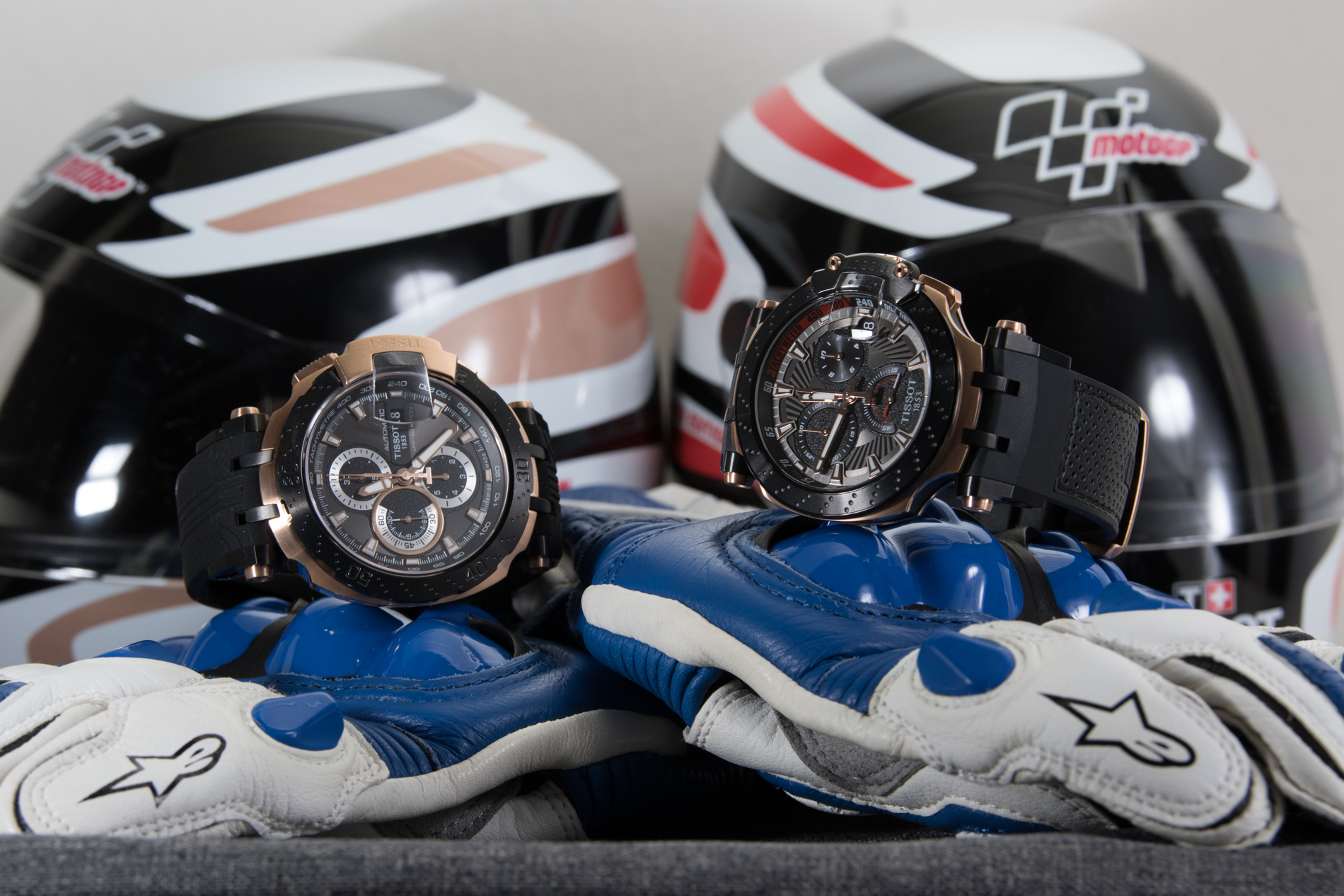 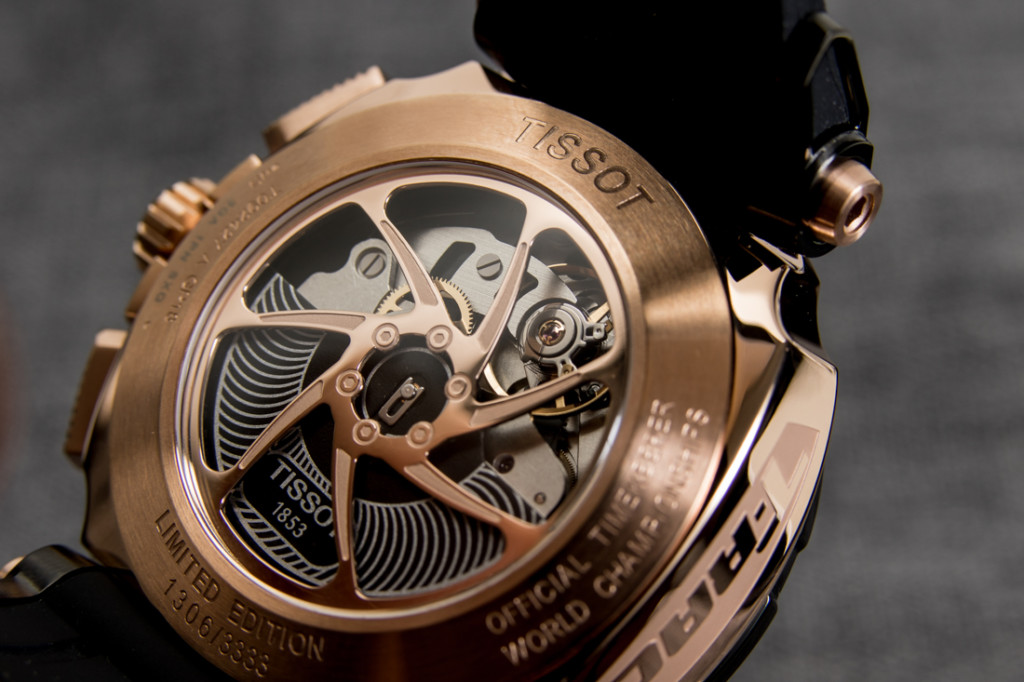 Differences that aren’t easily noticeable are the movements, the quartz model sporting the ETA G10.212 and the automatic running the C01.211, derived from the Lemania 5100 movement, produced by ETA specifically for Tissot. The quartz movement is flawless and button articulation seemed positive, if not a little soft when using the chronograph complication. The automatic movement kept good time, but when it came to using the chronograph pushers, they felt agricultural, inconsistent, and mushy at times.

For instance, the initial engagement was rough and required a lot of force to get it to click and while it was running, engaging the 2 o’clock pusher for the split time felt like there was a rubber bushing between the pusher and movement. Conversely, the 4 o’clock pusher to reset the complication was always crisp and firm, but not overly resistant. 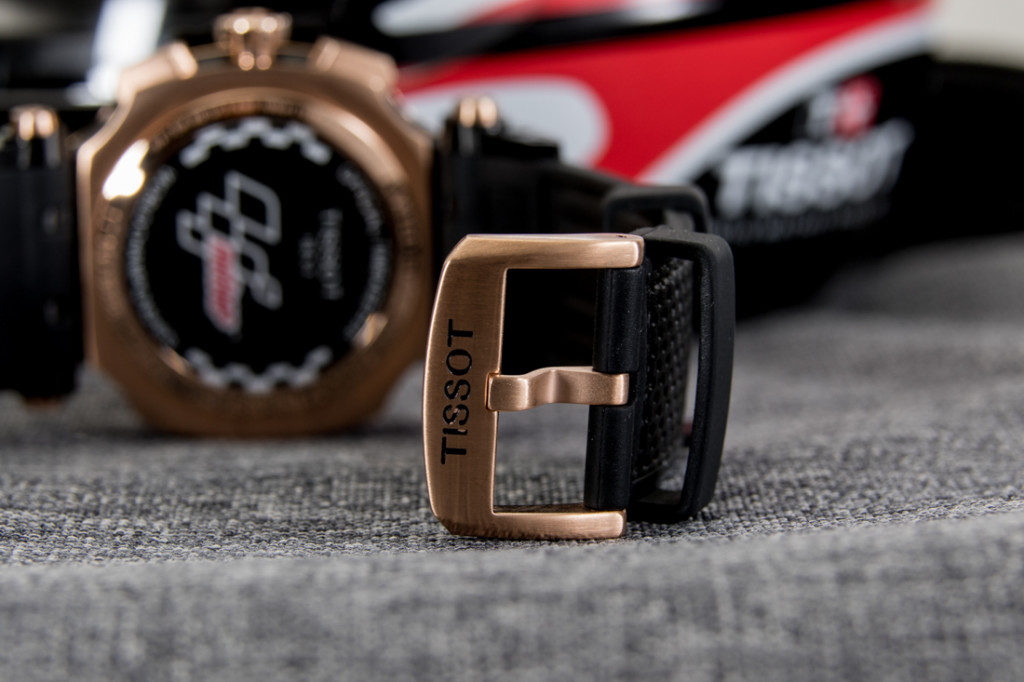 I actually use the chronograph complication a lot during work events and one of the drawbacks of this automatic chronograph was that the 45-hour power reserve wasn’t big enough to keep the chrono running while also keeping regular time. I constantly found myself looking at a watch that had stopped completely while I was timing something… and yes it was fully wound and worn all day by a fidgety man who swings his hands with much animation. Sadly, I ended up using the rotating bezel to keep track of elapsed time. 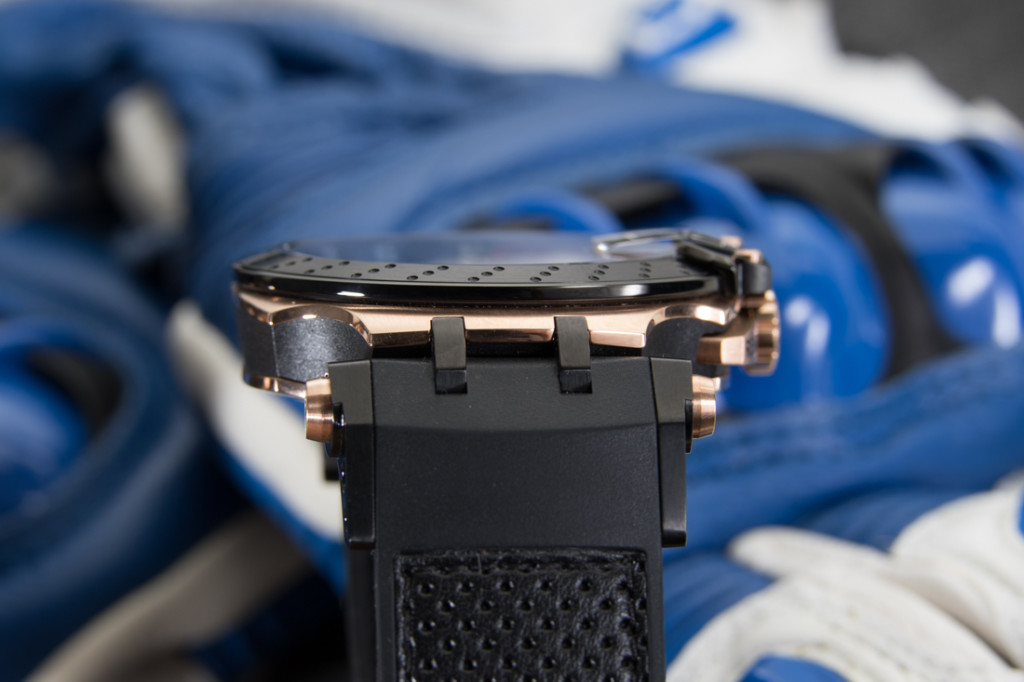 Oh yeah, and about those numbers and idiosyncrasies. Having worn both for a good amount of time and looking at all the design elements, I found it interesting to see that the larger 45mm watch had 20mm lugs and tread patterned straps that seemed appropriate, but the 43mm watch had oversized 22mm lugs and a leather/rubber hybrid strap which looked “more luxurious.” Another detail I noticed was that the floating lugs which resembled rearsets were more intricate on the quartz LE versus the automatic LE. 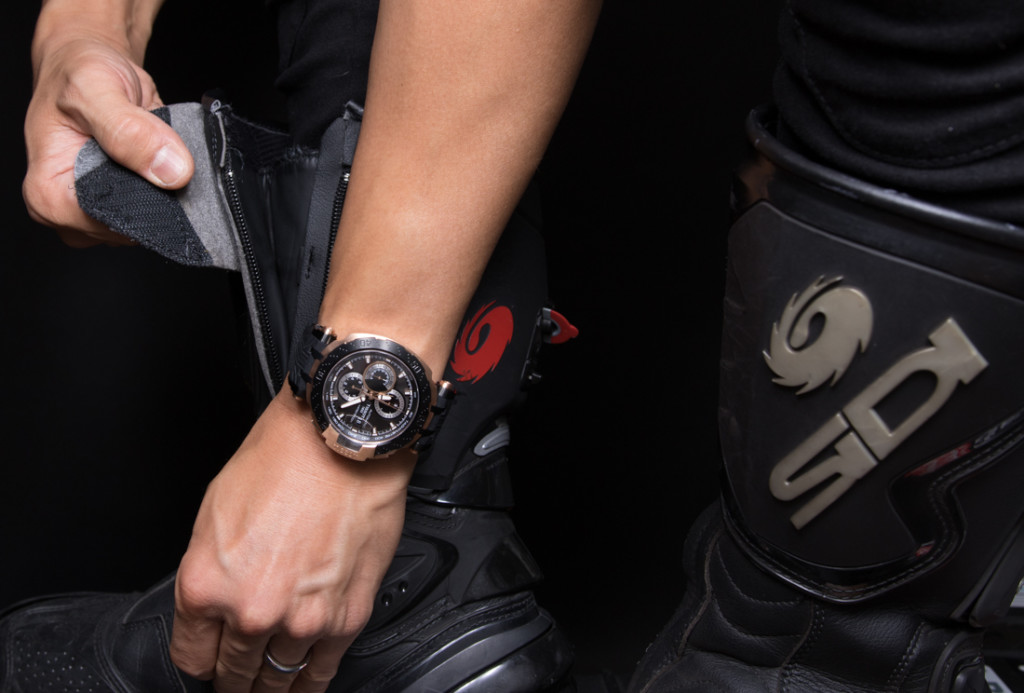 I’m not sure if the cyclops has any functionality or magnification as I couldn’t see any real use to it except for it being a design element. Unfortunately, much like a real brake caliper collecting brake dust, it collects a lot of dust in the form of lint and dirt particles under the cyclops. Without removing the crown guard, it’s virtually impossible to clean and remove the dust, unless you had an air compressor at your disposal. Both watches suffer this annoyance, as the bezel on the automatic LE actually rotates, thus leaving a gap. But I wonder why they didn’t seal the cyclops mechanism on the quartz LE, as the bezel does not rotate. 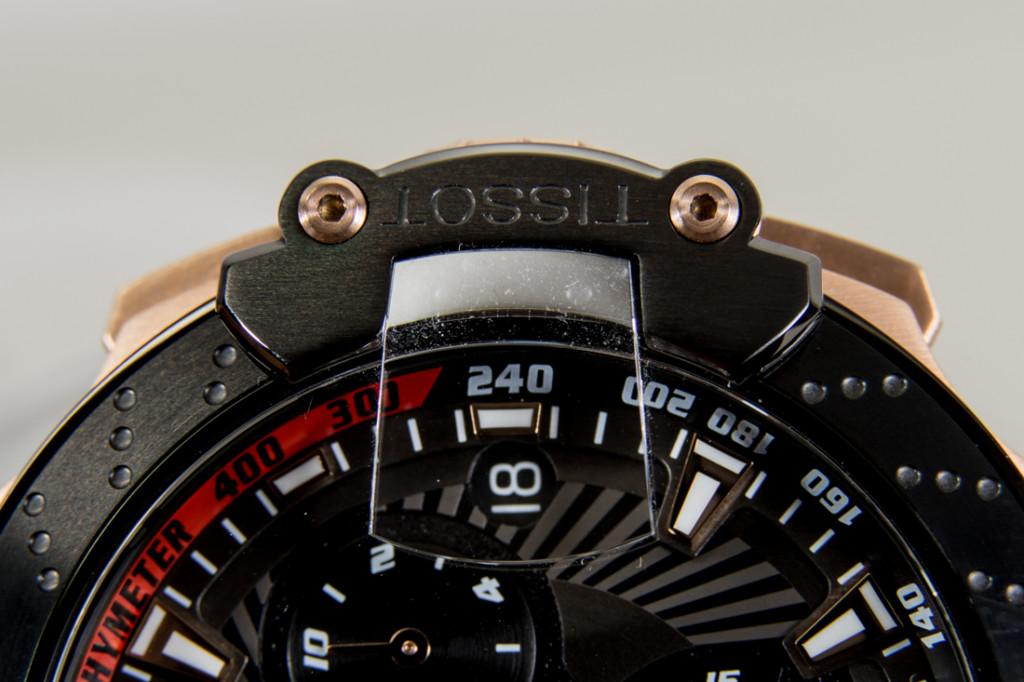 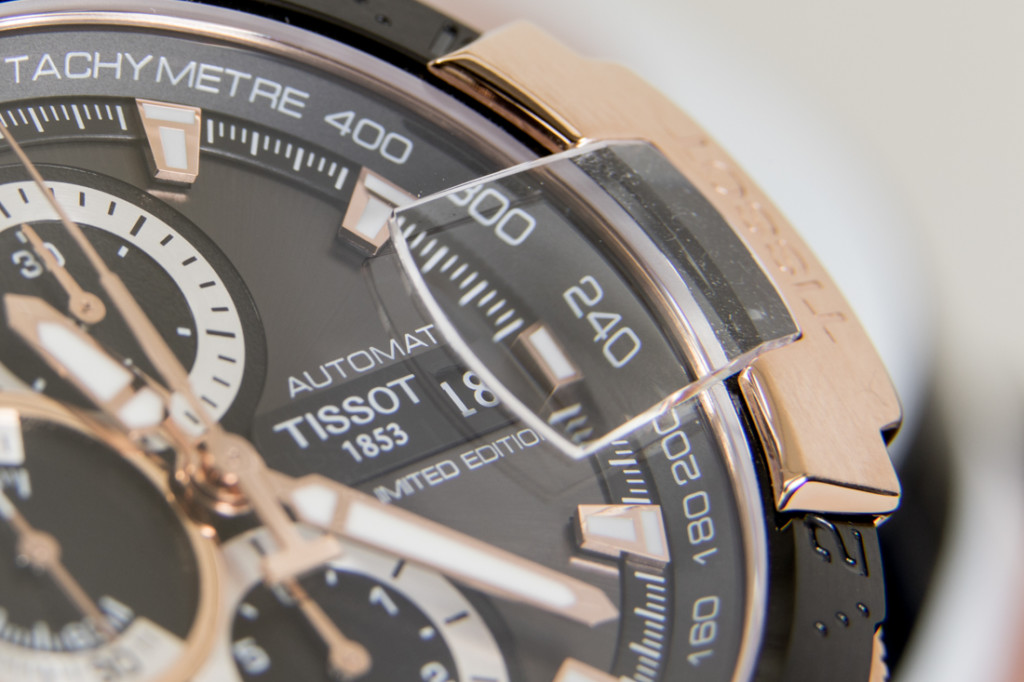 Ultimately, all the watches work, keep time and Tissot made them, but motorcycling, like watch ownership, needs to feel as good as it looks in person and on paper. If I had to pick one of the two, I’d get the quartz LE, because it feels more like a true MotoGP or motorcycle fan’s watch and evokes an energy, unlike the automatic version. 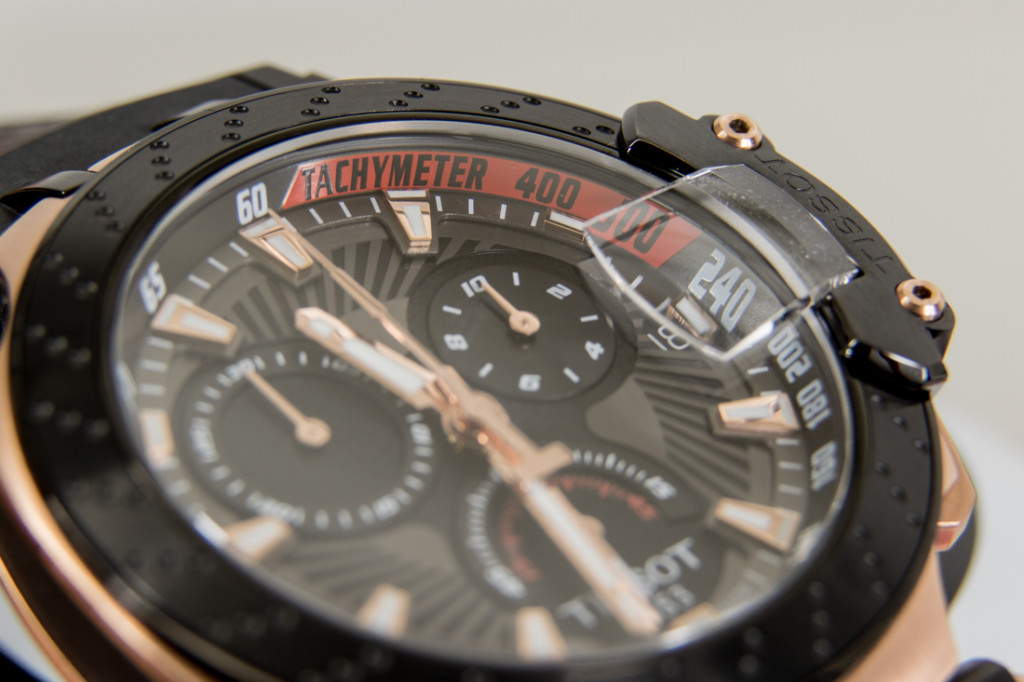 To give you an example, when you run the chronograph on the automatic you see the seconds hand tick away and the rest of the watch is visually stagnant except for the clicking off of minutes on the 12 o’clock subdial and, if the watch makes it to an hour of timing, you’ll see the 6 o’clock subdial tick off an hour. The quartz LE, on the other hand, has the movement of the second’s hand, but also the frenetic spin of the 2 o’clock subdial keeping track of 10ths of a second, and it’ll keep going. There’s just more movement when engaging with the quartz LE from a consumer standpoint. 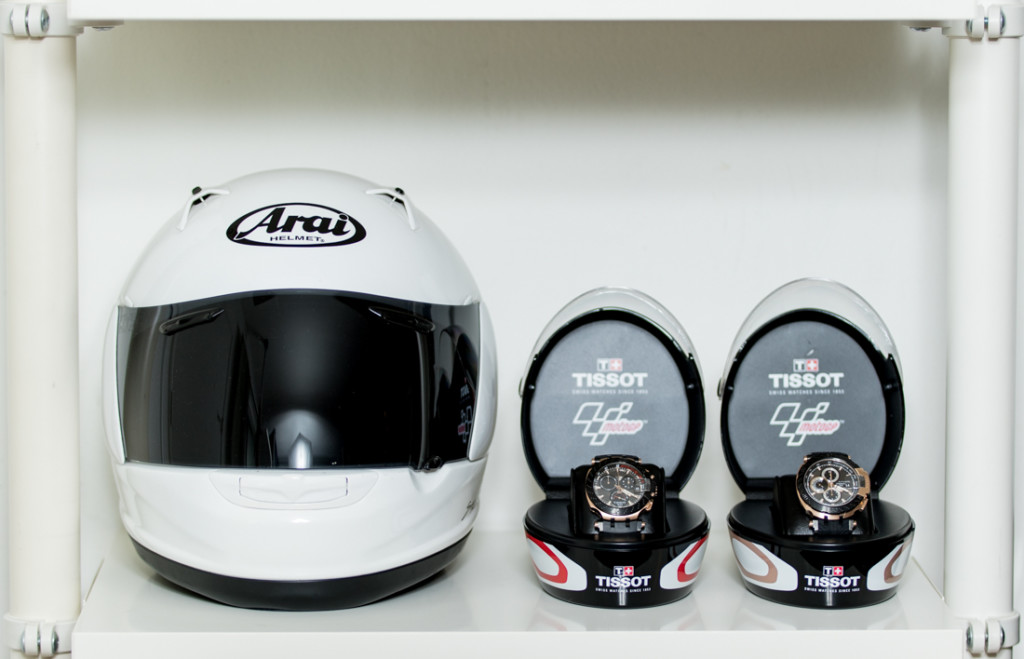 The MotoGP LE Automatic comes in the black and gold two-tone colorway for $1,295 and the quartz MotoGP LE comes in 5 colorways based on your favorite racer for $750. I personally think the 99 (Jorge Lorenzo) colorway is the best looking, but the 93 (Marc Marquez) colorway would have to be on my wrist for this year’s races. If I could combine both the quartz and automatic watches together, it would be the ultimate fan watch. Maybe in 2019, Tissot? Wink wink. tissotwatches.com or us.tissotshop.com

Necessary Data
>Brand: Tissot
>Model: MotoGP T-Race Limited Edition & MotoGP T-Race Limited Edition Automatic
>Price: $750 & $1,295
>Size: 43mm wide and 12.71 thick for the quartz & 45mm wide and 15.98mm wide for the automatic
>When reviewer would personally wear it: Black and Gold yells “Look at me,” but it’s also pretty neutral for what it is, so I’d wear the quartz all the time, since I’ve got to have that flex piece. The Automatics a bit of a thick hammer, so if you like banging on door jams and desks, put it on the wrist.

>Friend we’d recommend it to first: Leather clad monkey suit wearing motorcycle enthusiast, then motorcycle generalists. Outside of the two wheeled community, watch enthusiasts that are into the little mechanical design details (this watch is a treasure trove of motorsport mimicry)
>Best characteristic of watch: Both watches stay true to it’s intent and design aesthetic themed after MotoGP, and the pale Gold is just the right amount of yellow gold without feeling like the 80’s.
>Worst characteristic of watch: That dust magnet of a cyclops on both models. Automatic model is thicker and heavier than it should be. Lugs, straps and buckles were swapped at birth, unfortunately, and they might have went to the wrong parents because they both look like a Bovet.