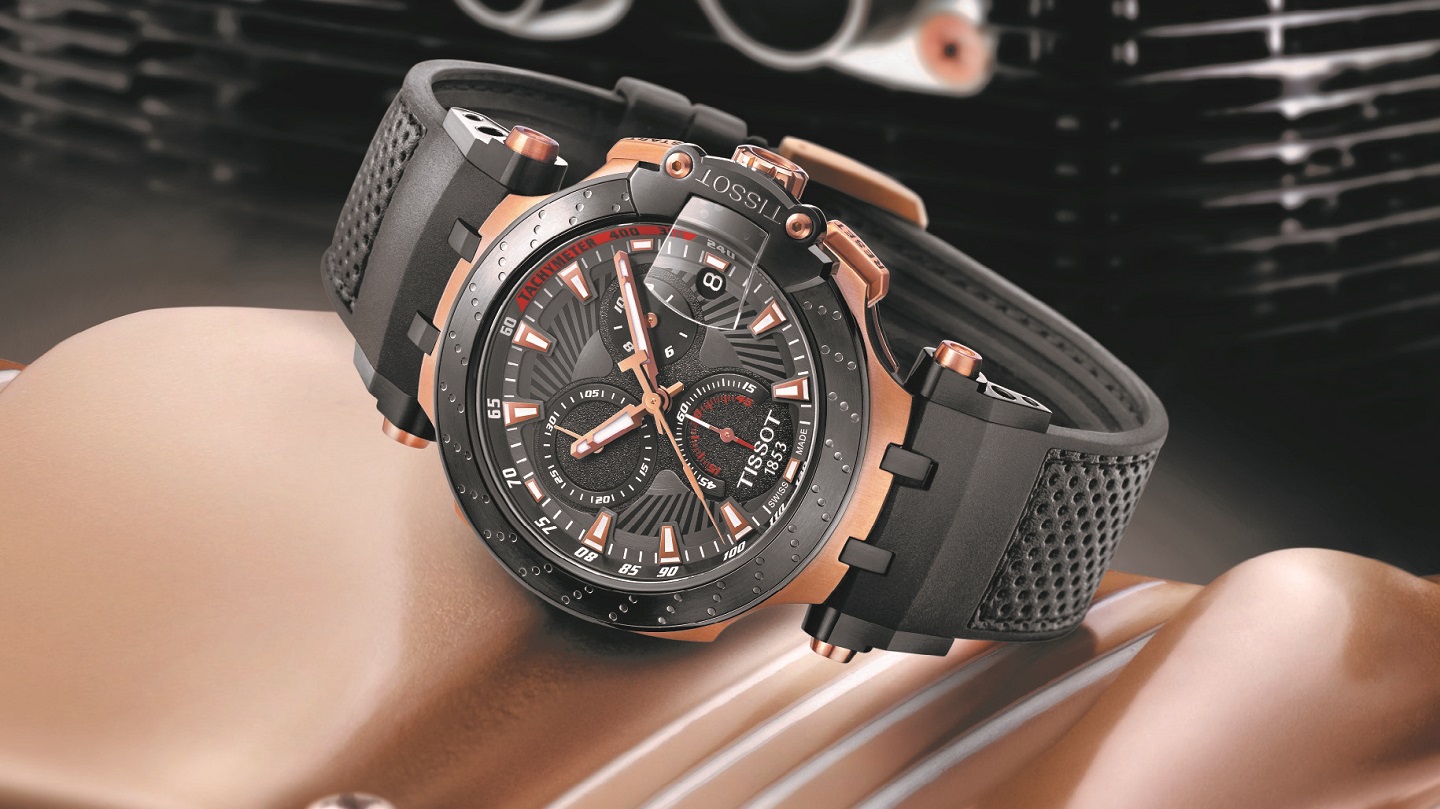 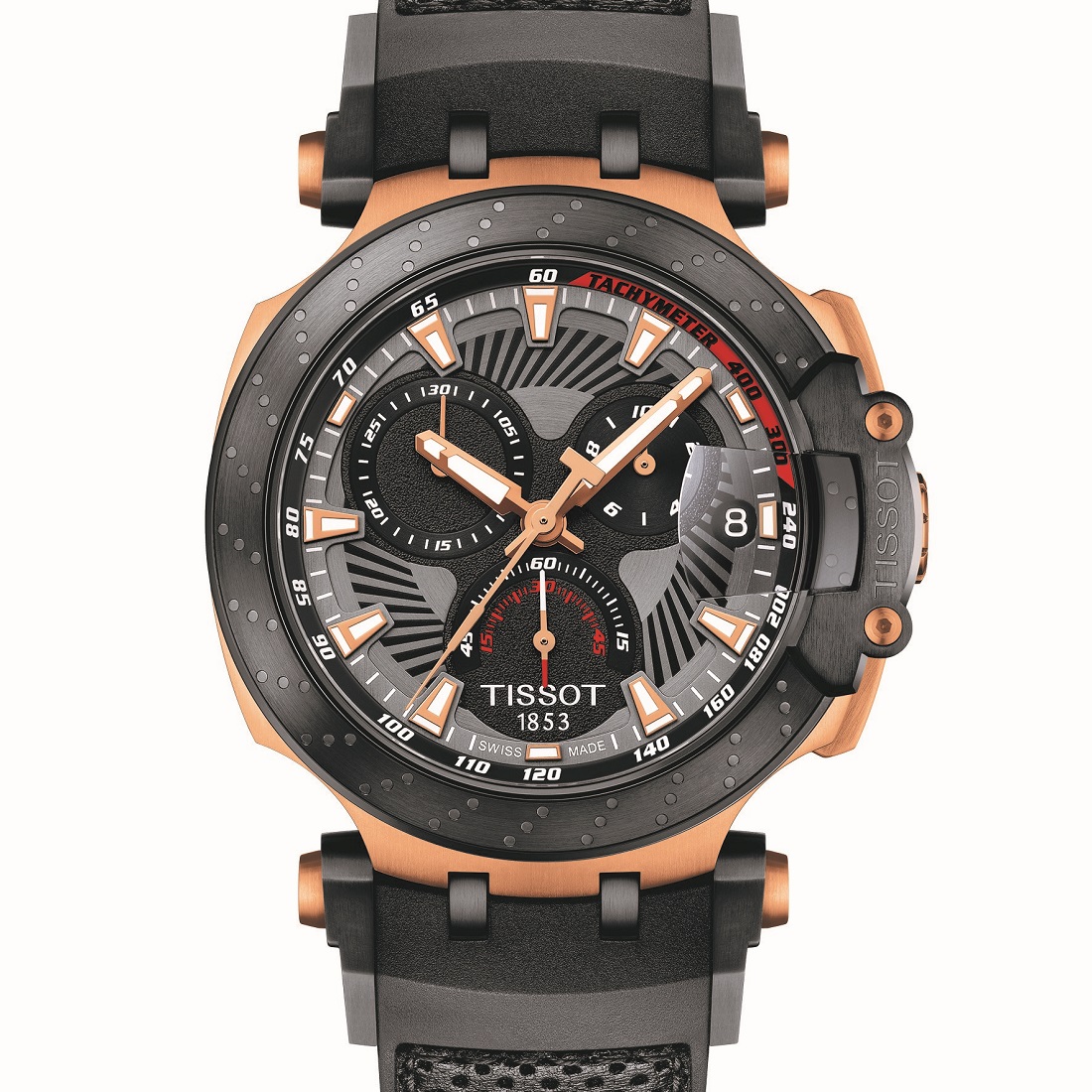 Leading up to Baselworld 2018, Tissot has released a new limited edition into what’s arguably its most masculine collection. Tissot has often been criticized for its change of direction over the last few years (something I feel is a good thing) through partnerships with a number of organizations and people – the NBA and MotoGP being the most consistent and successful. The motorbike racing inspired Tissot T-Race MotoGP Limited Edition Chronograph has more nods to Motocross than a bobble-head in a hurricane. I believe this model will fit into a niche of reasonably affordable watches for the hardcore speed-bike fans who aren’t afraid to rock a rose gold piece of manly wrist candy. 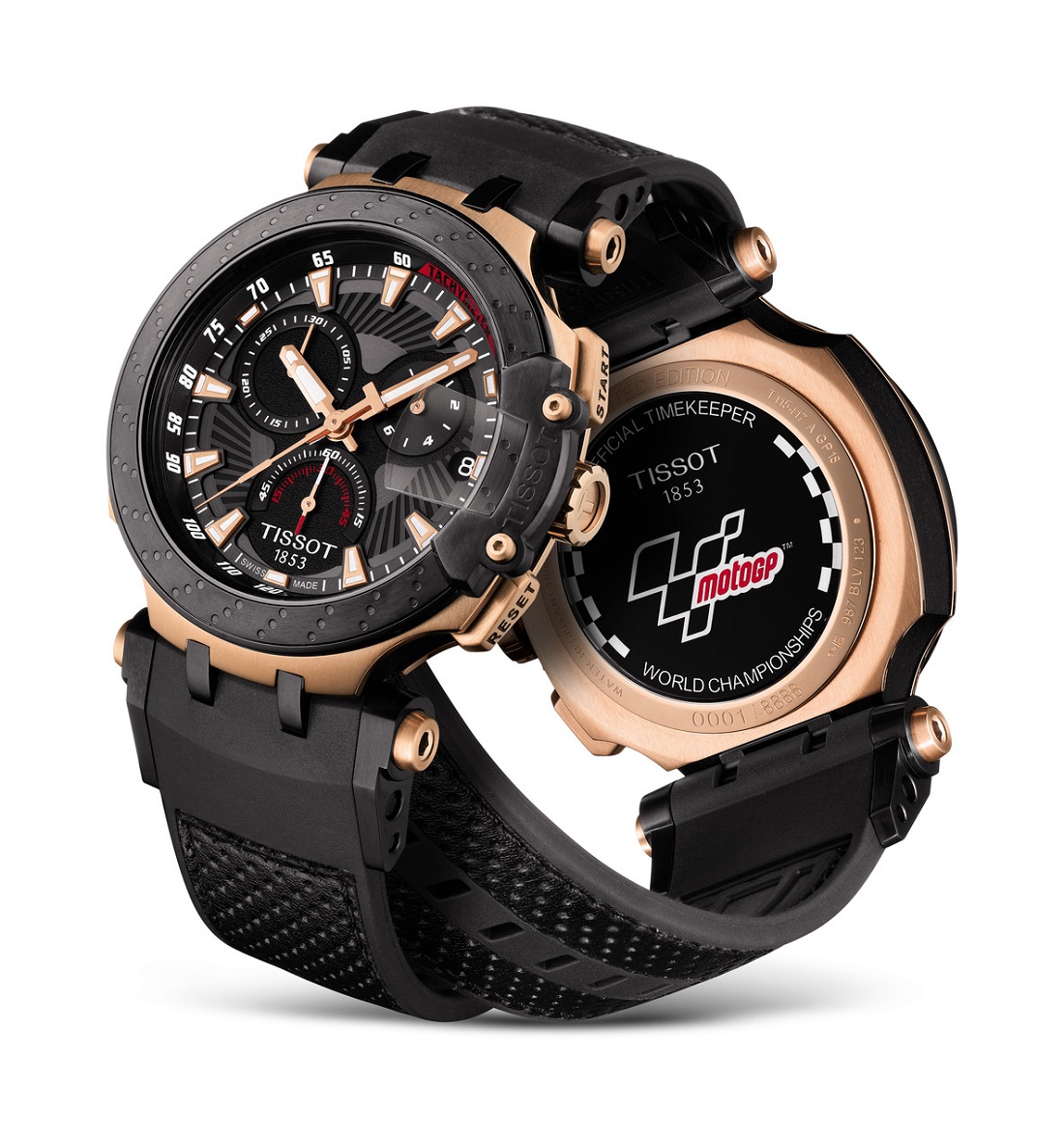 Let’s start with the case. Measuring in at 43mm x 12.7mm (though I imagine it feels a bit larger considering the hefty crown guard and pushers aptly described as the “control panel”), the stainless steel case is coated in rose gold, and features oversized lugs that make the top of the leather and rubber hybrid strap almost as wide as the case. The case itself is apparently “protected” by a bike frame inspired fiberglass ring around the perimeter – though we can’t see what that looks like because pictures of it aren’t included in the promotional materials. The bezel is designed to look like a brake disc with the crown guard taking inspiration from a brake pad. The over-sized date magnifier is hands down the most identifying feature of the T-Race collection, and even though it doesn’t do anything for me, it helps the watch not only appear unbelievably salient, but built-to-stand-out – features I feel that buyers are going to find important when purchasing a watch this “extreme.” On the back of the case is a silk-printed glass caseback brandishing the Tissot and MotoGP logo. The watch is equipped with an ETA G10 Quartz Chronograph movement and is water-resistant up to 100m.

Moving on to the face of the watch, or as I like to call it, the “Dial of Many Shapes and Patterns.” I personally feel that there is too much going on here for the sake of “motorbike inspiration.” The jumbled union of smooth, hammered, striped, polished, and lined surfaces take some strain to get used to, though I imagine that is par for the course when we are talking about Motocross inspiration. The thick rose-gold handset and indices are at least legible, though the thin spear-tipped central chronograph seconds hand can easily get lost among the magnifier and 4 different dial patterns it passes through at any given moment. The sub-registers are clearly dashboard inspired and the small size of the 2 o’clock counter simply doesn’t vibe with the small date window and large magnifier. The tire tread disc adds another layer of clutter, and the hammered sub-register fill just adds to that. While it is fair to say that previous iterations of the MotoGP T-Race models (the Jorge Lorenzo MotoGP for instance) utilized the same layout, the alternating colors helped add a layer of comprehension to the dial.

My complaints aside, I don’t imagine that this will have a hard time finding buyers. They are masculine enough to be appealing to fans of motocross, limited enough that it won’t need to find too many buyers, and cheap enough that the everyday fan won’t have to defer his car payments to accommodate his motorbike enthusiasm. The watch is packaged in a really cool motocross helmet presentation box, and will be limited to 8,888 pieces. For what you’re getting, the price for the Tissot T-Race MotoGP Limited Edition Chronograph is a modest $750 USD. tissotwatches.com