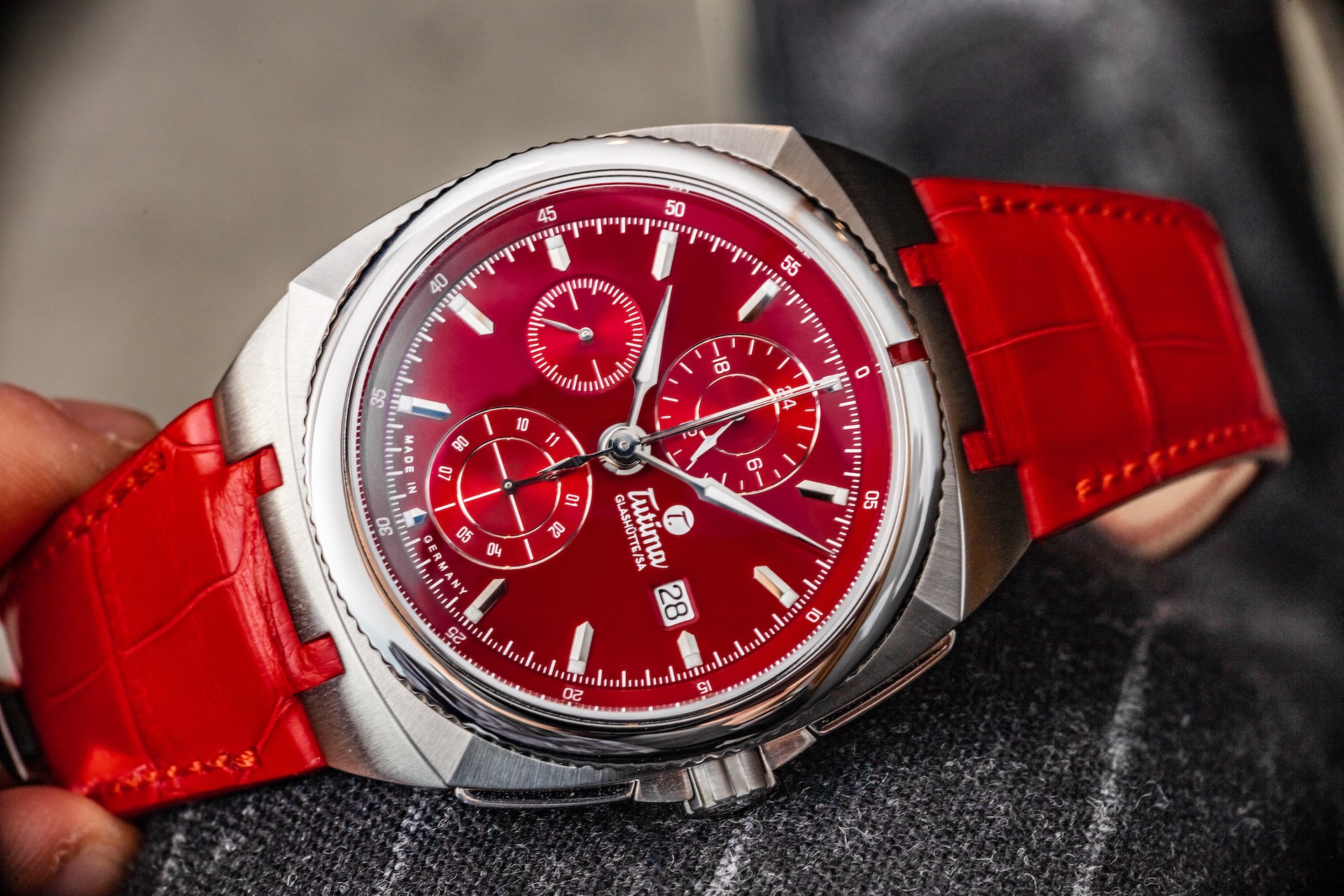 Tutima has been expanding the color options for a few of its collections in recent years, and the brand has been executing these pretty well. A few months back, we took a look at the green Flieger 6105, which is one of the brand’s entry level offerings and one of the best values in the category available — it was on our list of favorite watches from Baselworld 2019. Also shown at last year’s Baselworld is this ruby red Saxon One Chronograph that is a bit more divisive in nature but a lot of fun at the same time. 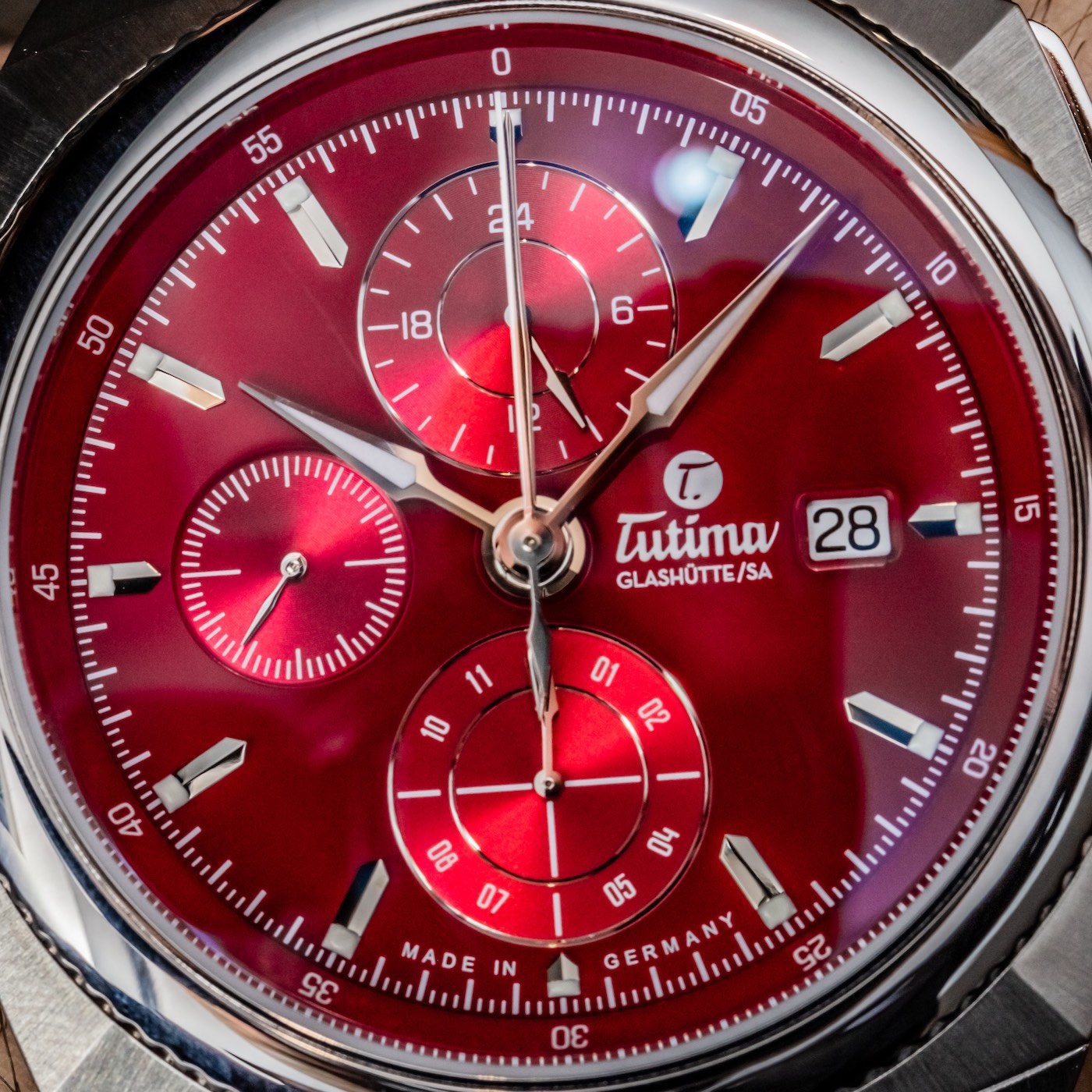 Red dial watches are still on the periphery as far as current trends go, but we’ve been seeing more and more of them (the TAG Heuer Monaco 1979-1989 comes to mind). It’s all in the execution, and I think Tutima succeeds in what it calls both “racing red” and “fire engine red,” which is pretty close to ruby red to my eye. There is some good contrast with the red on the sub-dials being a bit lighter and brighter than on the rest of the dial. Overall, I find that the distinct case of the Saxon One is made more noticeable with a louder dial like this red one. There are so many chronograph options out there in the mid five-figures and many buyers are looking for a watch that can show off their personality more, and this red Saxon One certainly does that. It’s important to remember that this likely will not be the first or only watch in someone’s collection, which the appeal of this red dial hinges on. 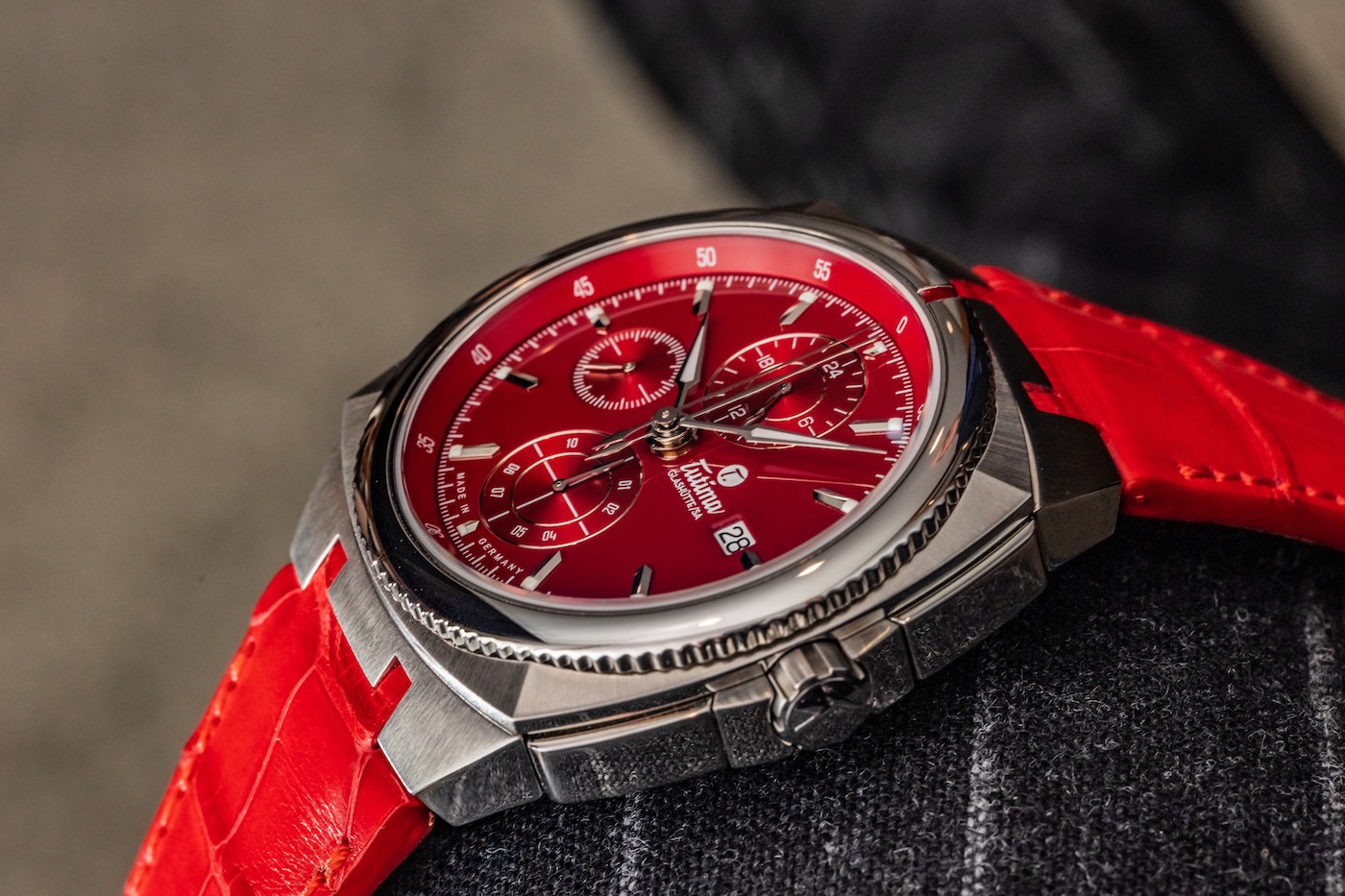 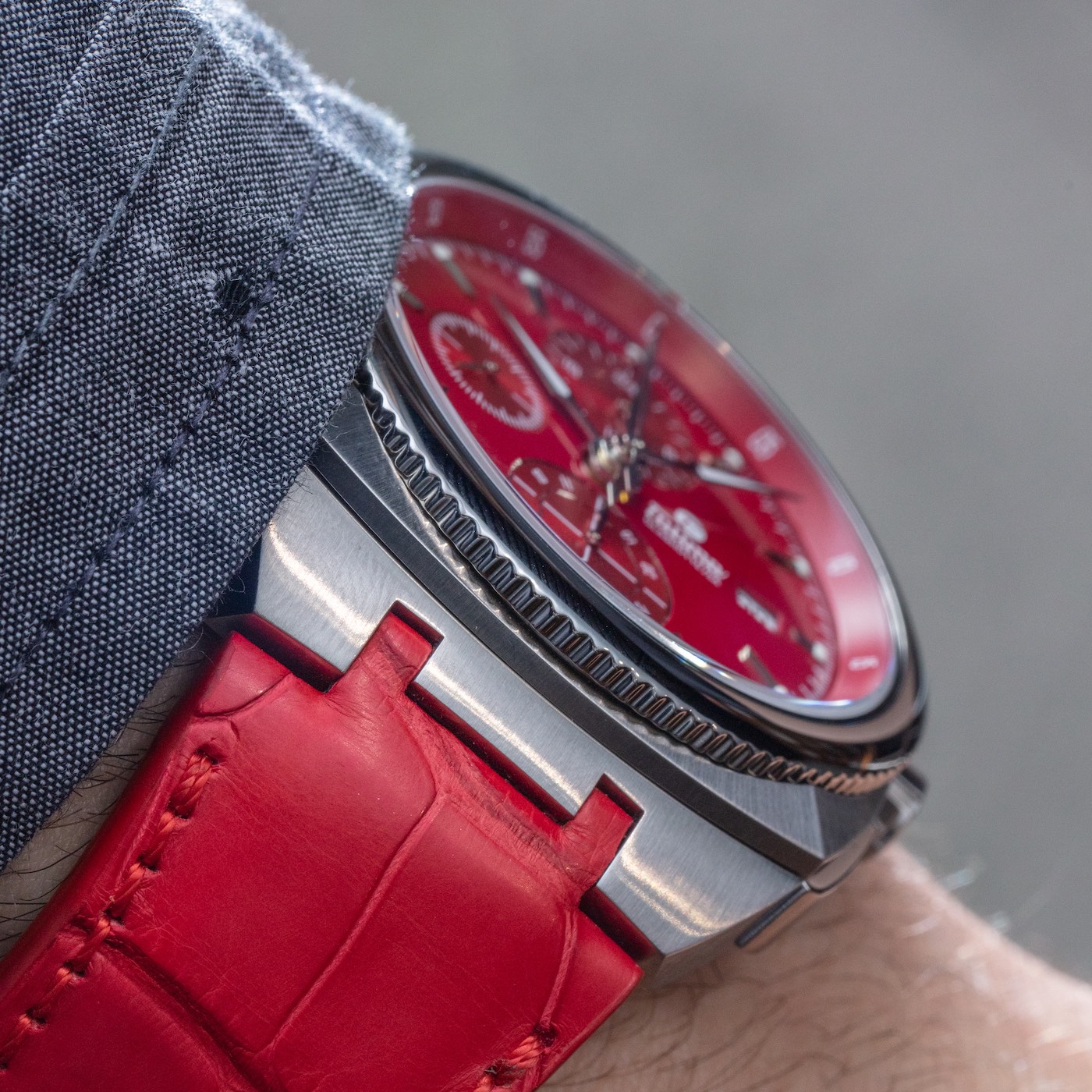 The Saxon One is a dressy chronograph that was released back in 2013 and, having worn one on several occasions, it left an impression on me.First off, the distinct angled cushion case is not similar to many others I’ve seen out there, and Tutima calls it “pyramidal,” which is fairly accurate. I enjoy and appreciate the design quite a bit, even though it makes the watch wear a bit larger than its 43mm case would suggest. (It’s 15.7mm thick, which adds to the wrist presence.) I think scaling down the case size to 42 or even 41mm would do wonders for the Saxon One. I believe the three-hand Saxon One is now available in 40mm, though.

I really am glad Tutima kept the case in a matte finish, though I am just not the biggest fan of the polished bi-directional bezel on the Saxon One. That said, the long integrated chronograph pushers punch above their weight in both tactile and aesthetic consideration. 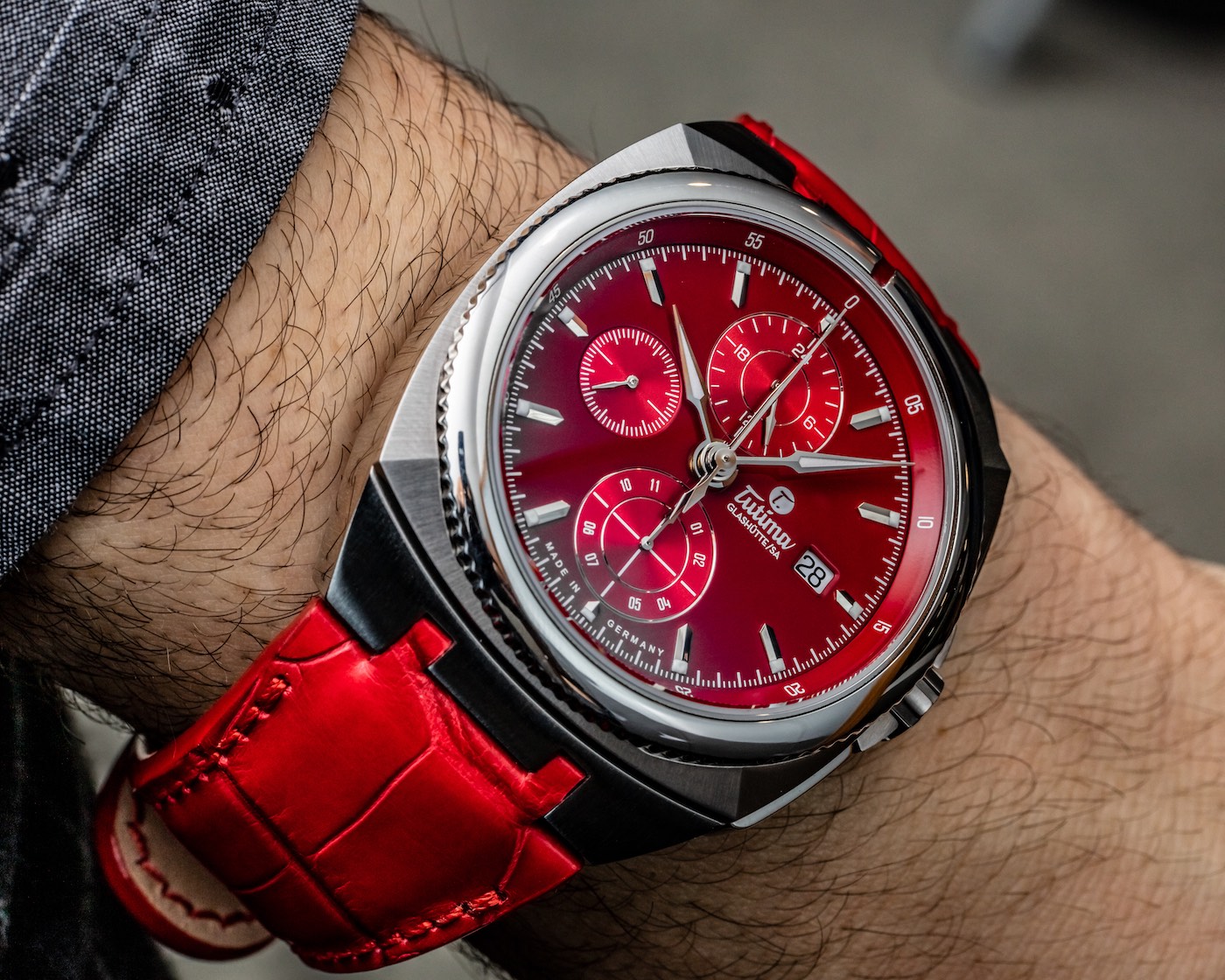 It’s easy to skim over this, but it’s really not that often that you see a truly unique case with this kind of finishing for the price. One more thing of note: The watch is water resistant to 200M. To compare, it’s superior to several other chronographs in this price category, like the TAG Heuer Monaco (100M), Omega Speedmaster Professional (50M), or IWC Pilot’s Watch Chronograph (60M). 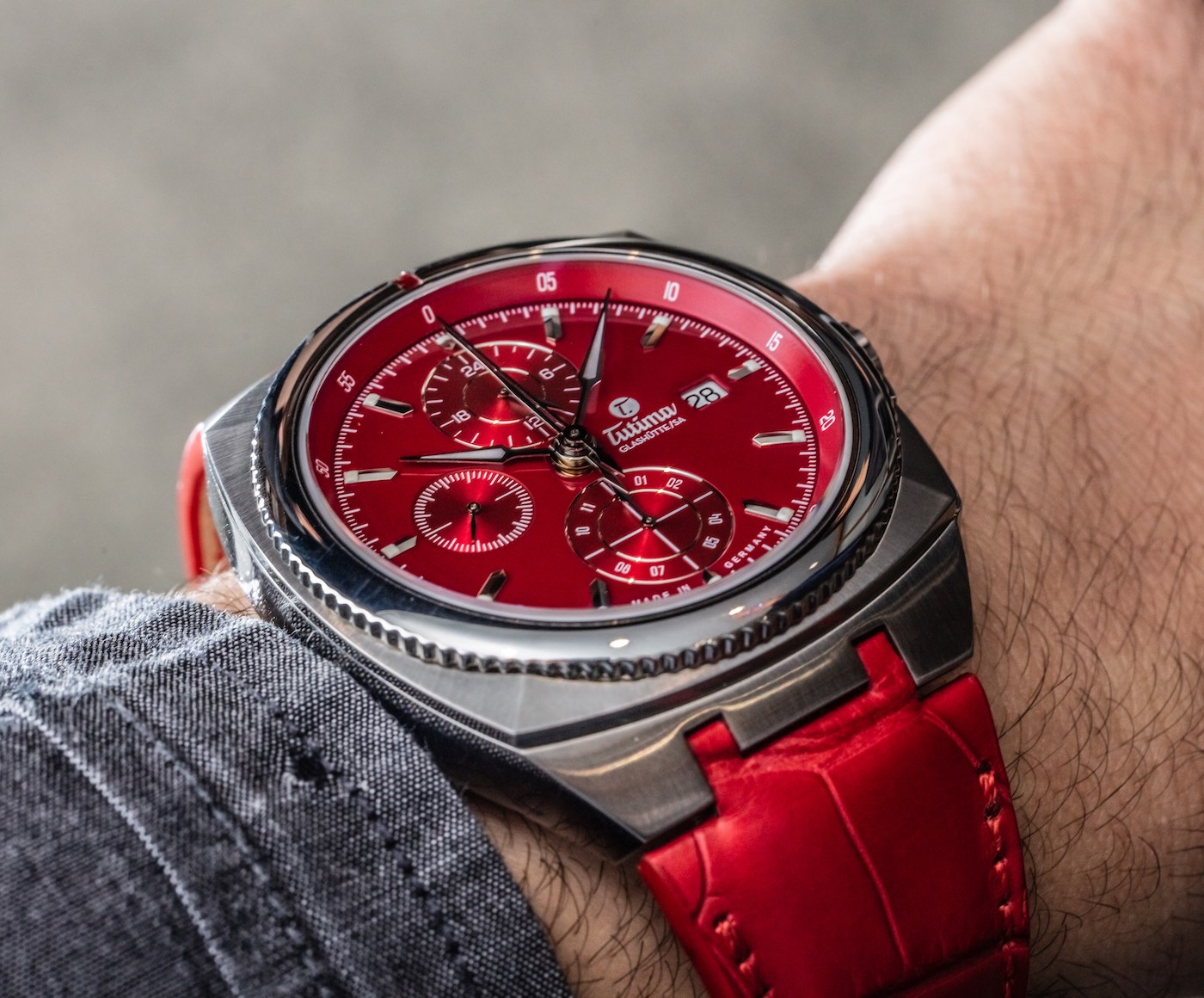 The Saxon One has another a feature that one rarely sees in this ~$6,000 price point — a central chronograph minute hand rather than a sub-dial counter. Having central chronograph seconds and minute hands is clearly superior for ease of use and is also a callback to the Tutima NATO Chronograph from the 1980’s. Back in the 1980’s, the now nearly 100-year-old Tutima was chosen to officially produce watches for NATO forces in Europe, which has long endeared the brand to pilot watch enthusiasts. 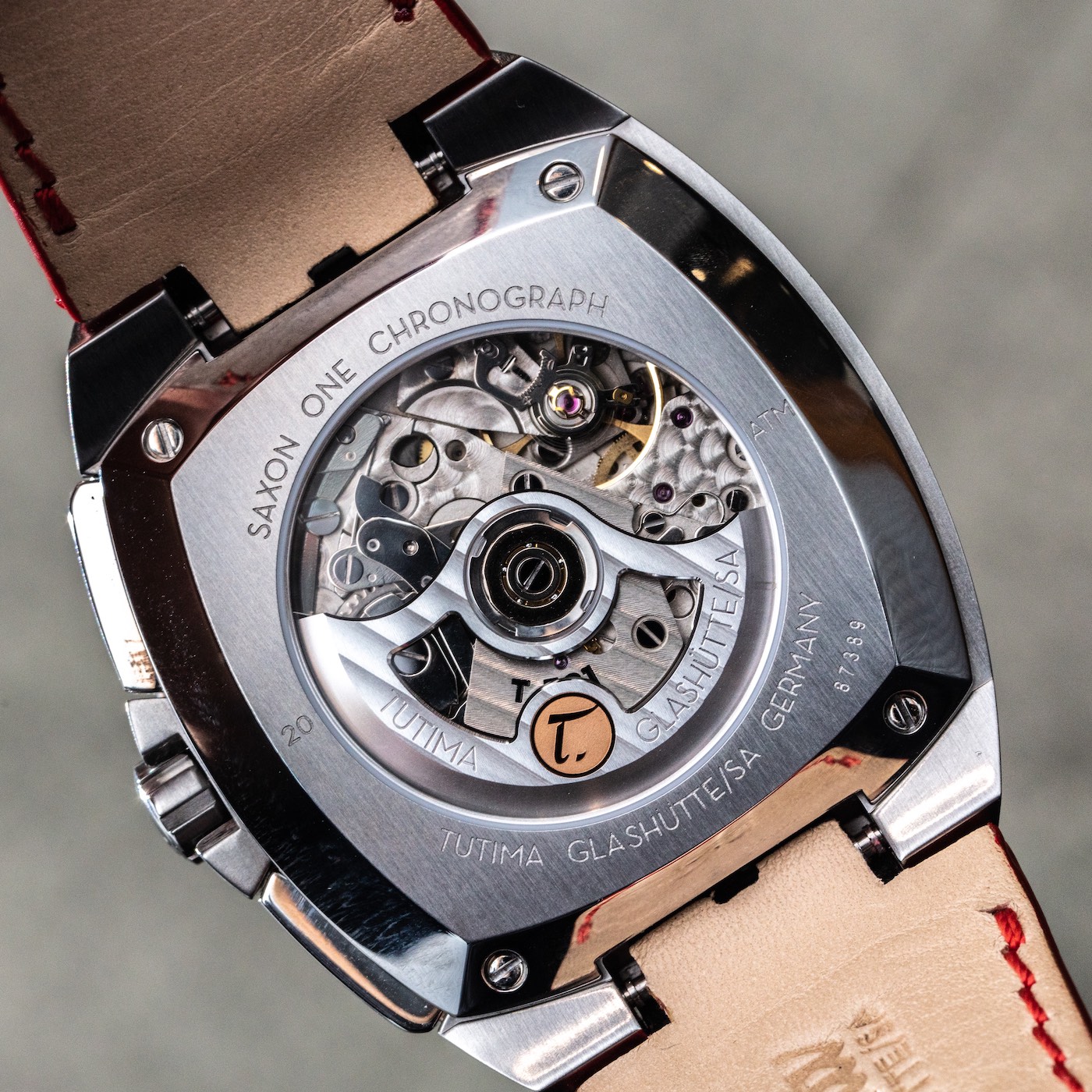 Tutima does have its own manufacture, though the Saxon One Chronograph can’t make that boast (though the Patria  Steel 6610 is one of the best in-house values out there). Used here is the Caliber Tutima 521 automatic movement, which is a considerably modified Valjoux 7750. With the Lemania 5100 in mind, Tutima created a proprietary chronograph system that adds the central minute-hand function, as well as 24-hour counter at 12 o’clock. Done with 25 jewels, the 521 has a 44-hour power reserve. 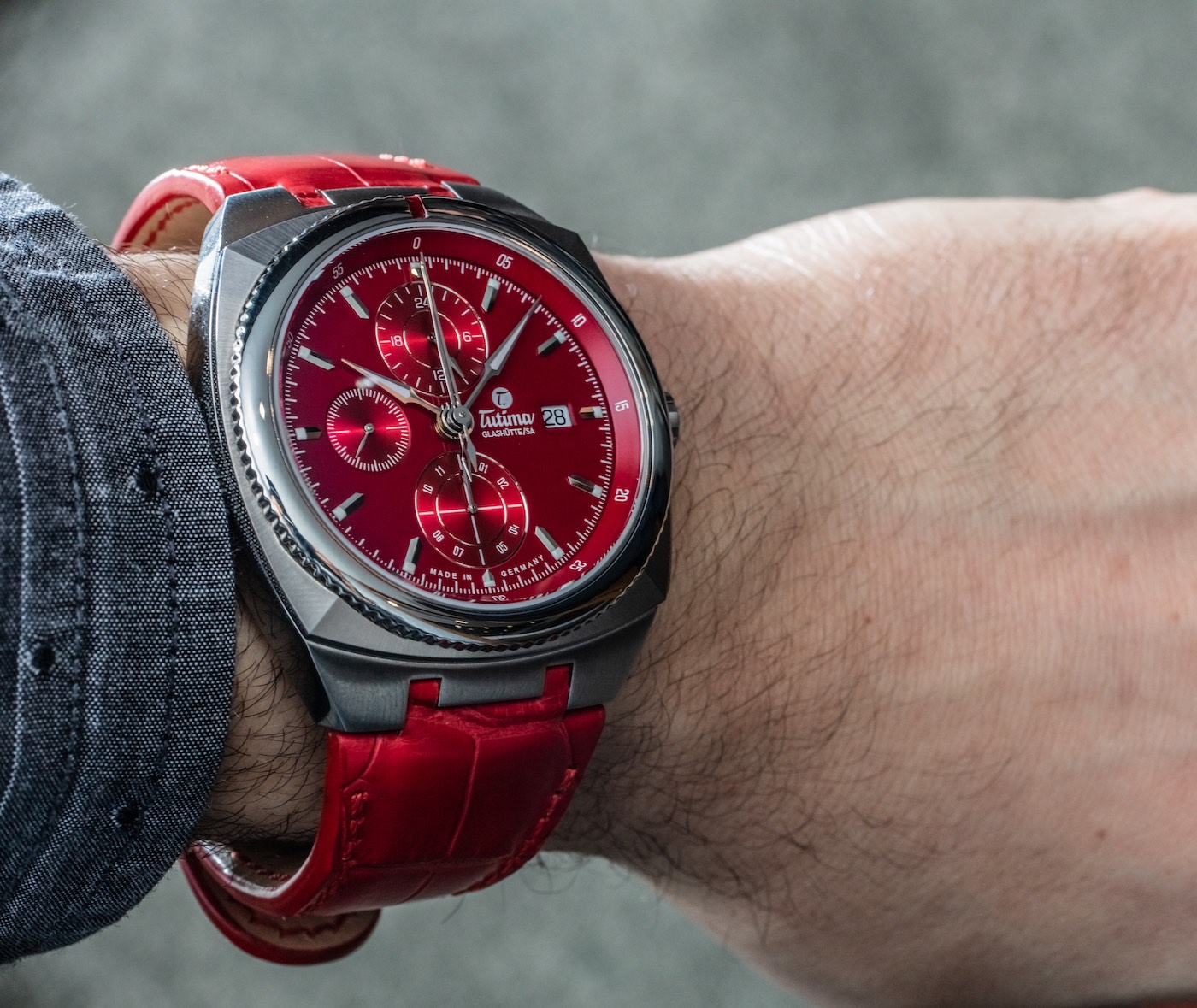 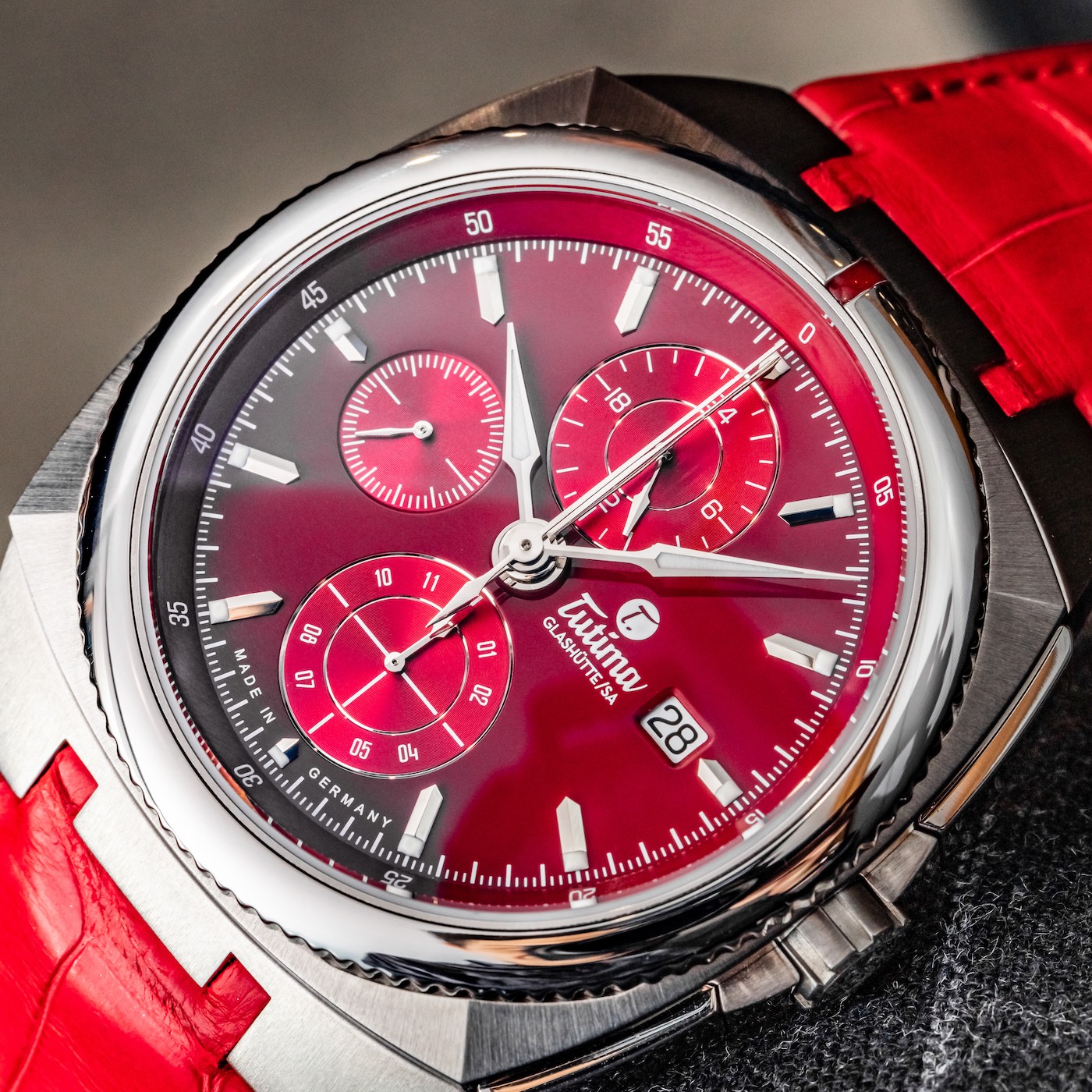 The Tutima Saxon One Chronograph in red is a low-key value that delivers a really great overall chronograph in a fun color for the many people who are bored of the typical black, white, blue, etc dial colors out there. It is available on either a bracelet with a folding clasp or, as seen here, an alligator strap with steel folding clasp. To be honest, I find the red alligator strap that you see here to just be a bit too much and would personally go for the bracelet. Price for the Tutima Saxon One Chronograph in red dial is $6,100 on strap and $6,500 on bracelet. You can learn more at tutima.com.