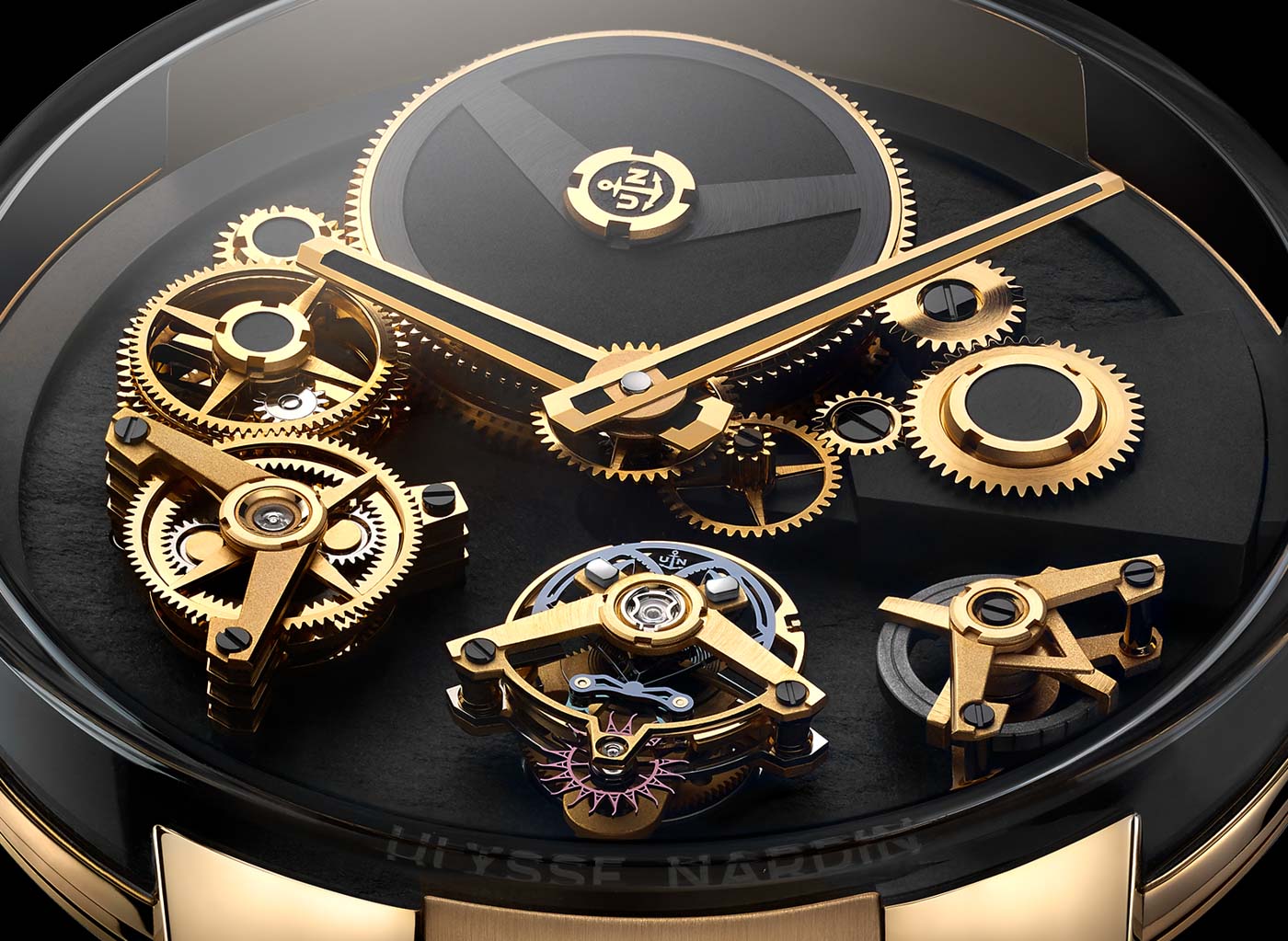 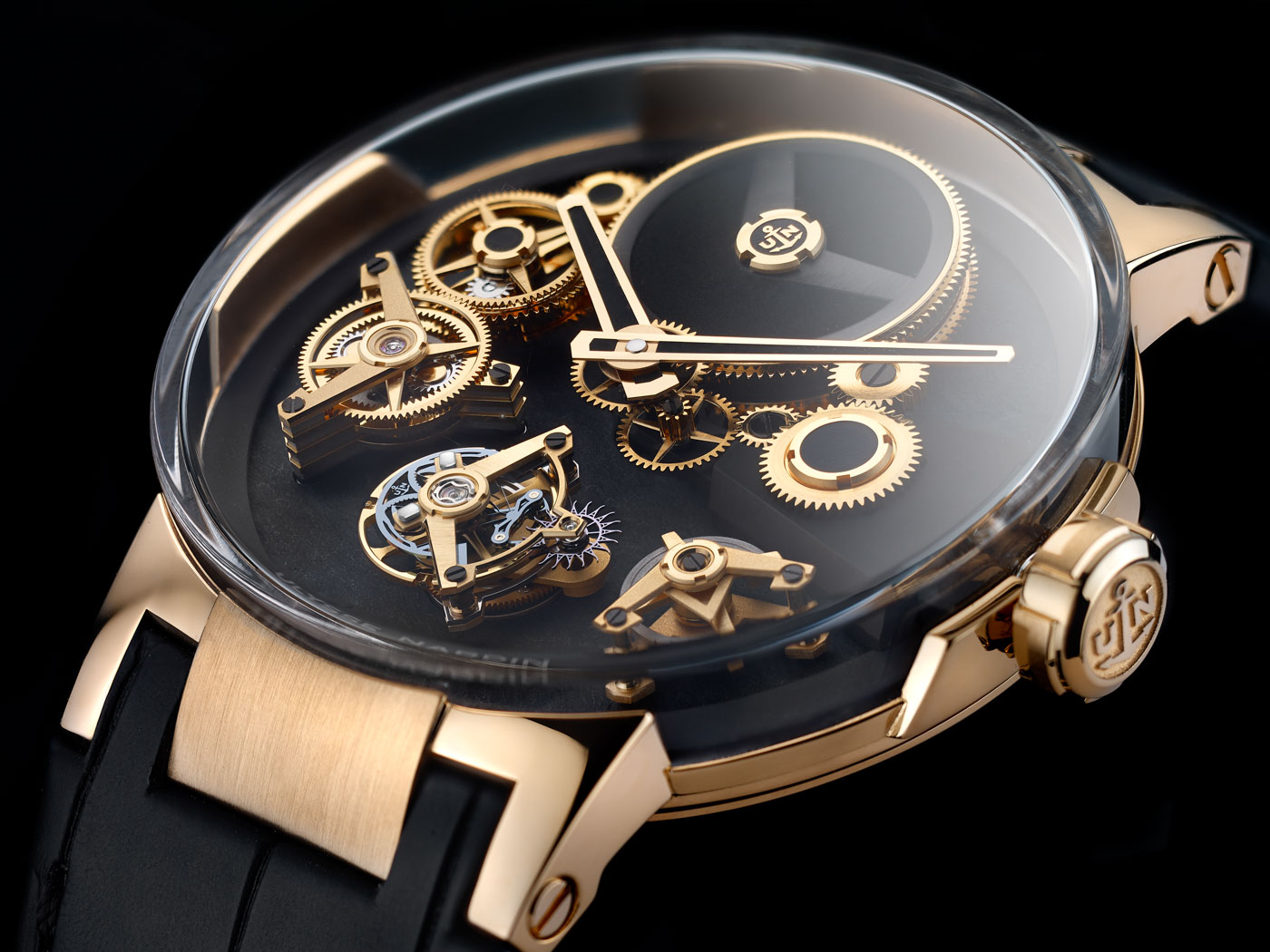 “Time flies!” – I quite like the application of this otherwise rather tired idiom that Ulysse Nardin chose, because it does in fact go neatly with their new Ulysse Nardin Executive Tourbillon Free Wheel; a watch that appears to have a deficiency in the wheel connection department. Because if a flying tourbillon is good, then a movement with lots of other flying stuff is… better? 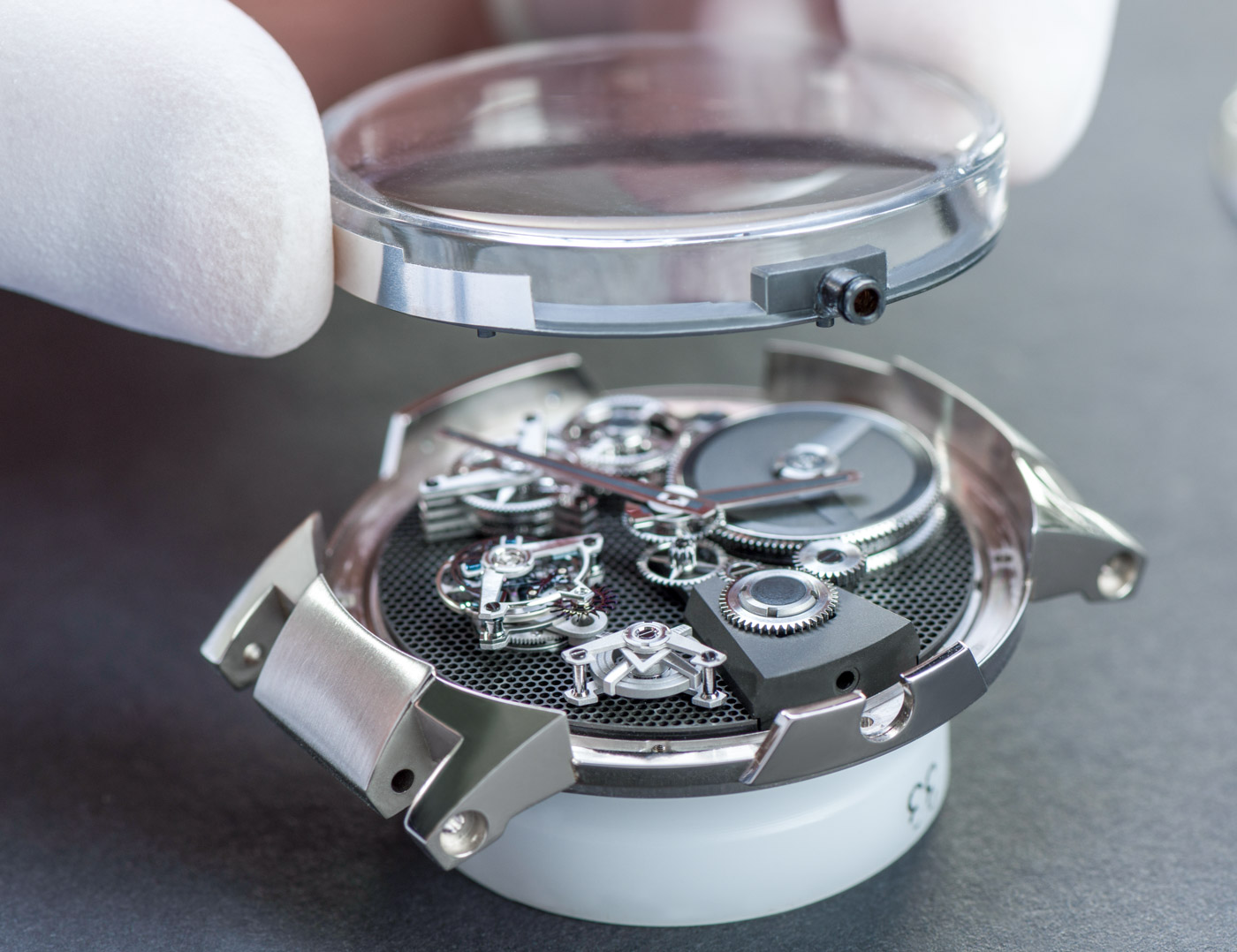 For the record, these parts fly in the literal sense as much as time does – not really. Even less-than-hardcore watch lovers will know, that a flying tourbillon is a tourbillon that is only secured from underneath, but not from above, and that’s what you’ll see at the 6 o’clock position on the dial of the Executive Tourbillon Free Wheel. The rest of the flying stuff is a lot of the gears and stacks of gears standing on their own, poking through the dial, often apparently without any connection to other important segments of the movement. The 18ct rose gold version comes with a “slab of slate” dial, whereas the 18ct white gold variant has a sleek black honeycomb grid acting as the dial and, as such, the backdrop of the components on show. 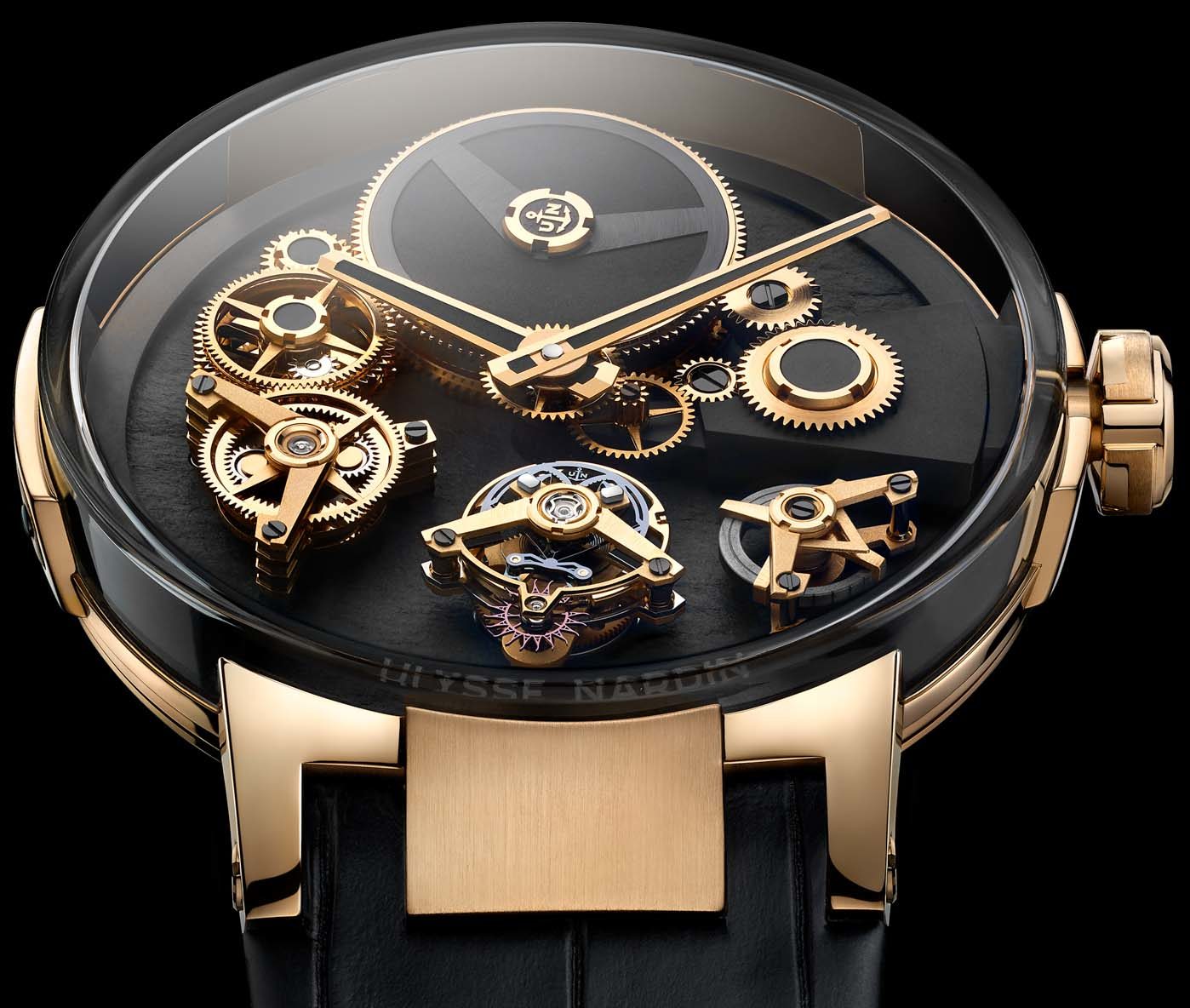 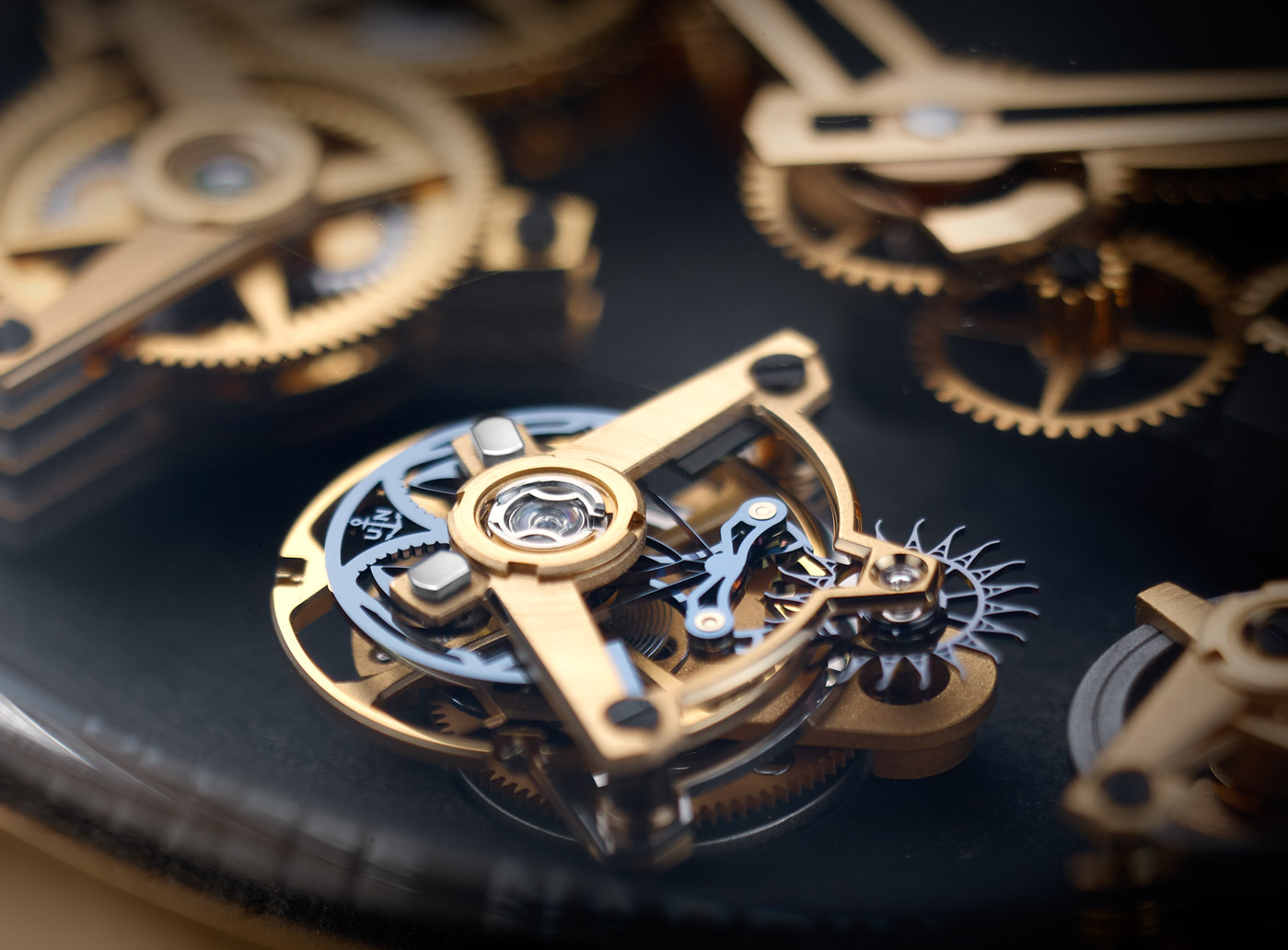 Ulysse Nardin points out: “The most astonishing features are the dial’s tourbillon bridges and the 7-day power reserve indicator at four o’clock, which are shaped like boomerangs and look like they are miraculously floating in the air.” Ehm… To each their own, I guess – but I doubt, or rather, hope, that it’s not the boomerang-shaped bridges that will make my fellow watch lovers’ hearts race upon seeing this watch. 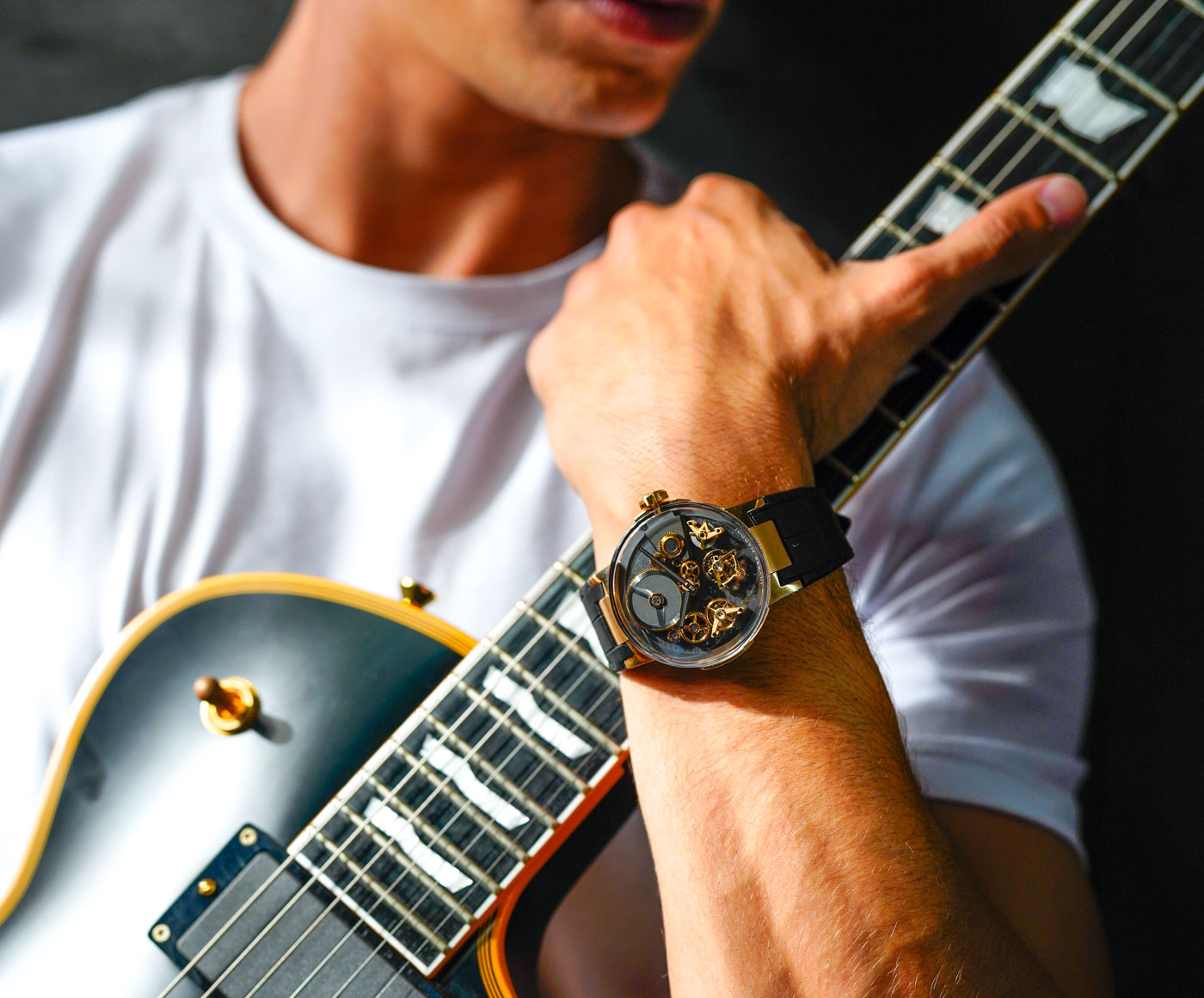 “The case-back too, is in sapphire, except there’s nothing to see inside…” – good job adding a sapphire case-back, then! If all watch releases were this blunt, because that of course was an exact quote, I’d sure enjoy reading them a lot more. Hilarious! Truth be told though, among the over two dozen or so official shots that the brand provided there indeed are no pictures of the case-back side of the watch. You can see guys wearing the watch, caressing guitar necks with the watch on, or taking pictures with a de-branded vintage camera… but none show the case-back. I guess I’ll have to just use my imagination and picture the Ulysse Nardin HQ engraved on the large back panel of the movement, shooting lasers at other watch manufactures near La Chaux-de-Fonds. I mean, there’s got to be something there, otherwise why install a sapphire case-back? Laser-shooting manufacture it is. 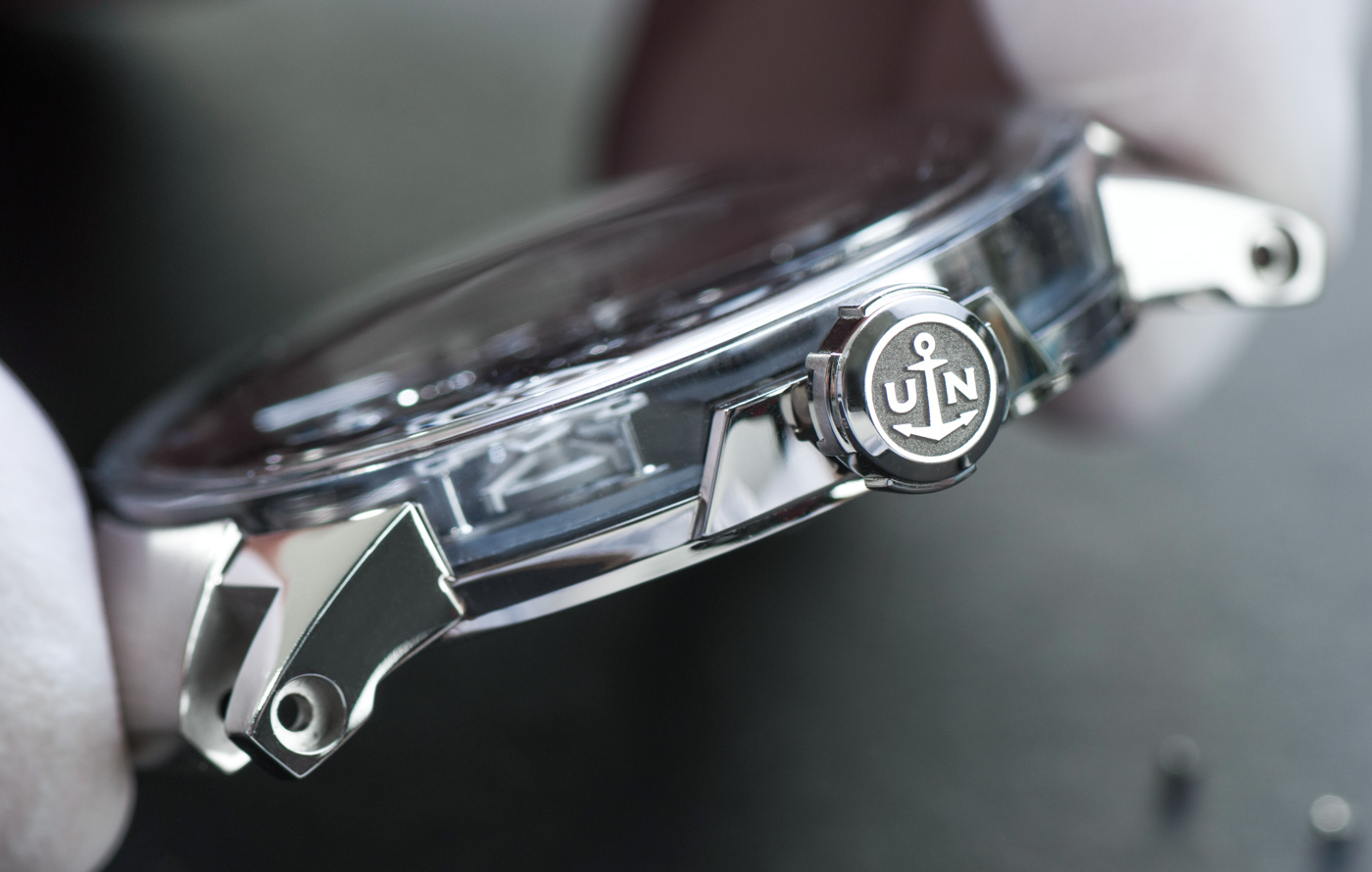 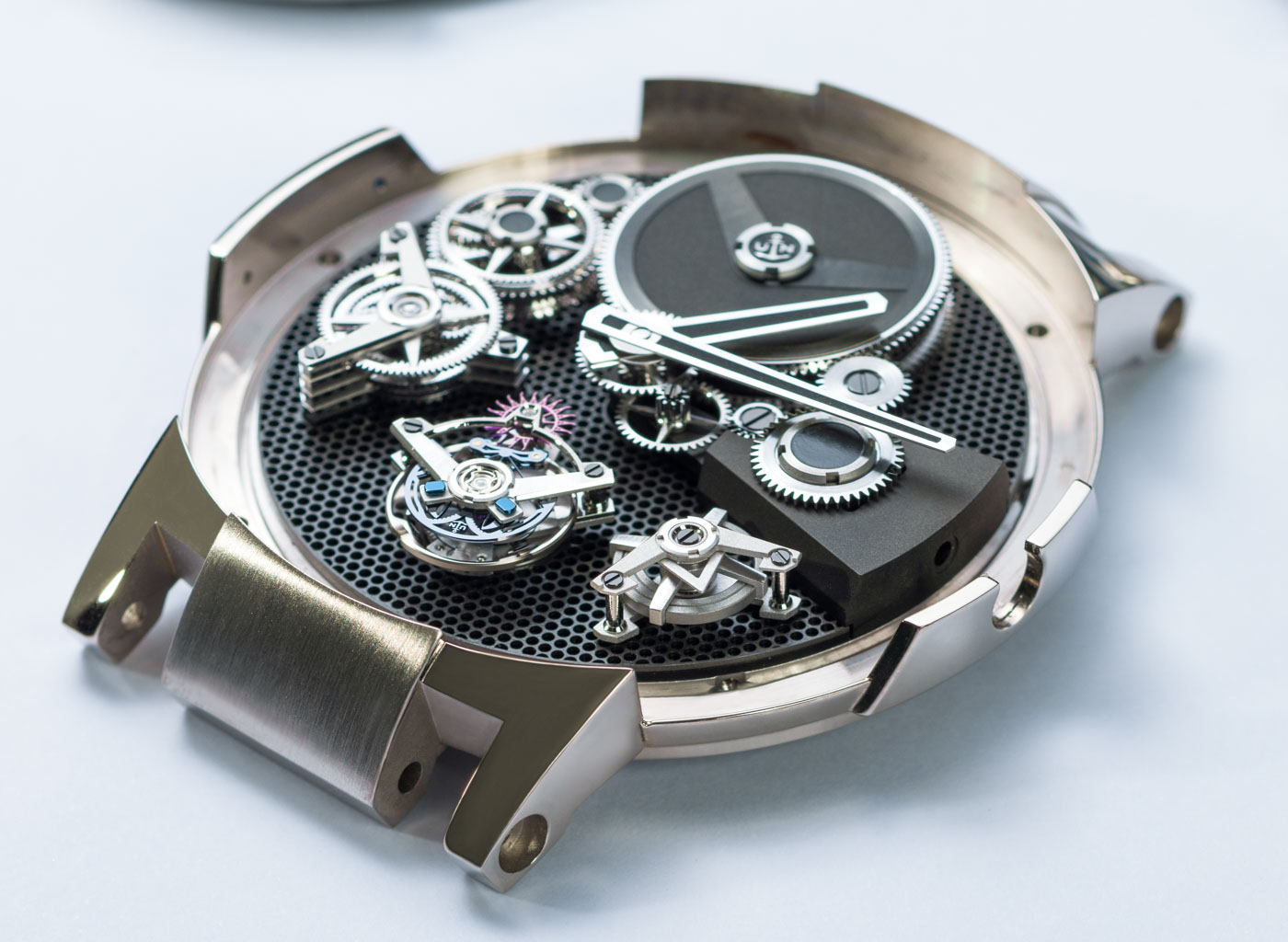 What I mind quite a bit more not knowing about than whatever boasting is actually on the case-back is how the different, seemingly isolated component groups are linked in the movement. The press release makes no mention of this whatsoever. Clearly, there has to be some sort of connection, and said connection will be dealt with gears located, by power of deduction, somewhere underneath the dial – maybe on the case-back side we’d also see some jewels and other pointers as to where these are exactly. Part of the going train is revealed between 9 and 12 o’clock on the dial. What’s “missing” is the gear or set of gears that links the pinion of the tourbillon assembly with the going train. 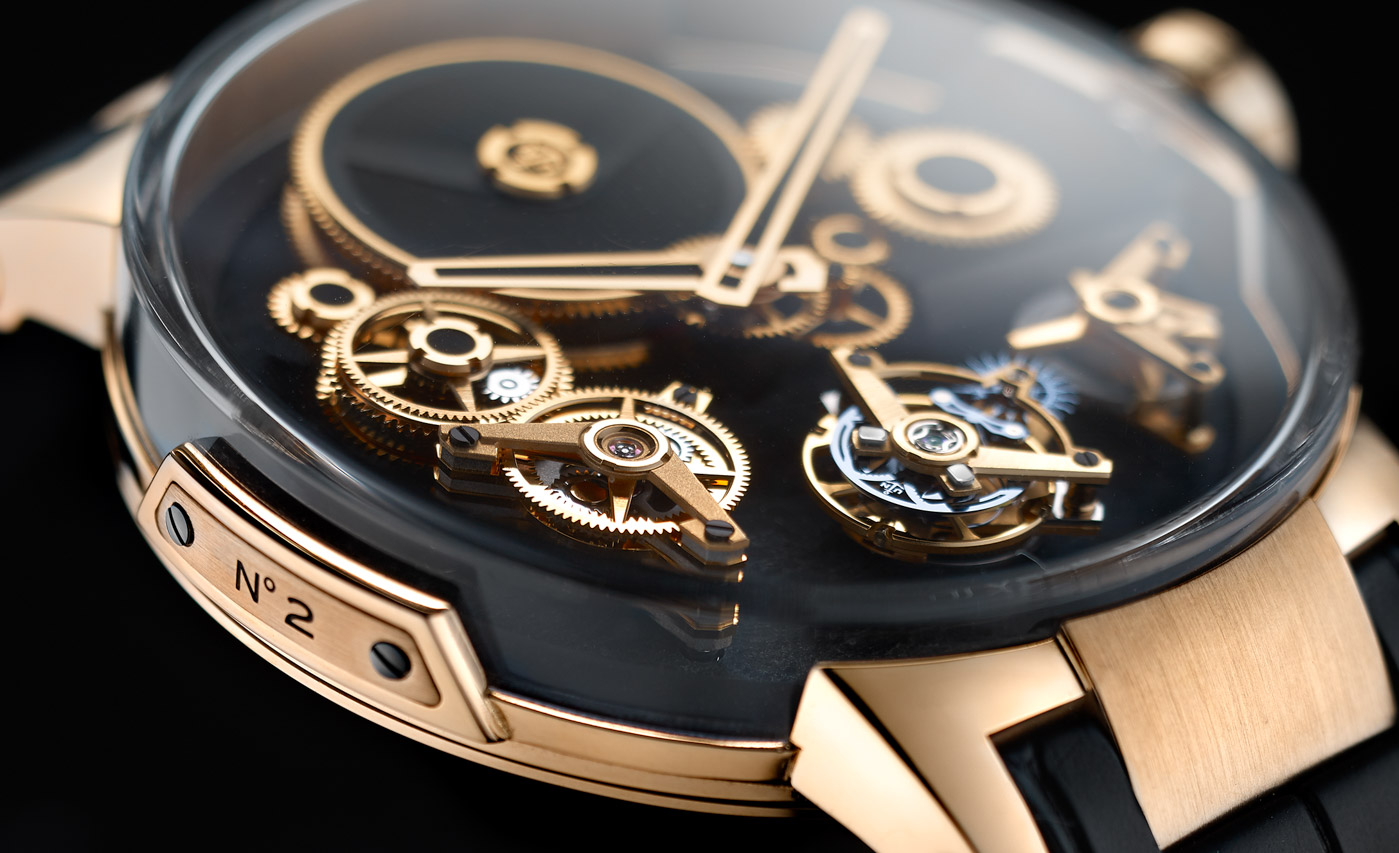 Normally, a tourbillon movement has the mainspring, a center wheel and a third wheel that transfer drive, whereas the fourth wheel (that’s normally the wheel that drives the escape wheel in a normal movement) being fixed. The third wheel drives a pinion that is linked to the tourbillon carriage, and the escape wheel’s pinion travels around the periphery of the fixed fourth wheel. Here, however, I see a few extra wheels and pinions in the train between the mainspring and the tourbillon, not to mention the one that’s directly by the tourbillon, just hidden by the dial. 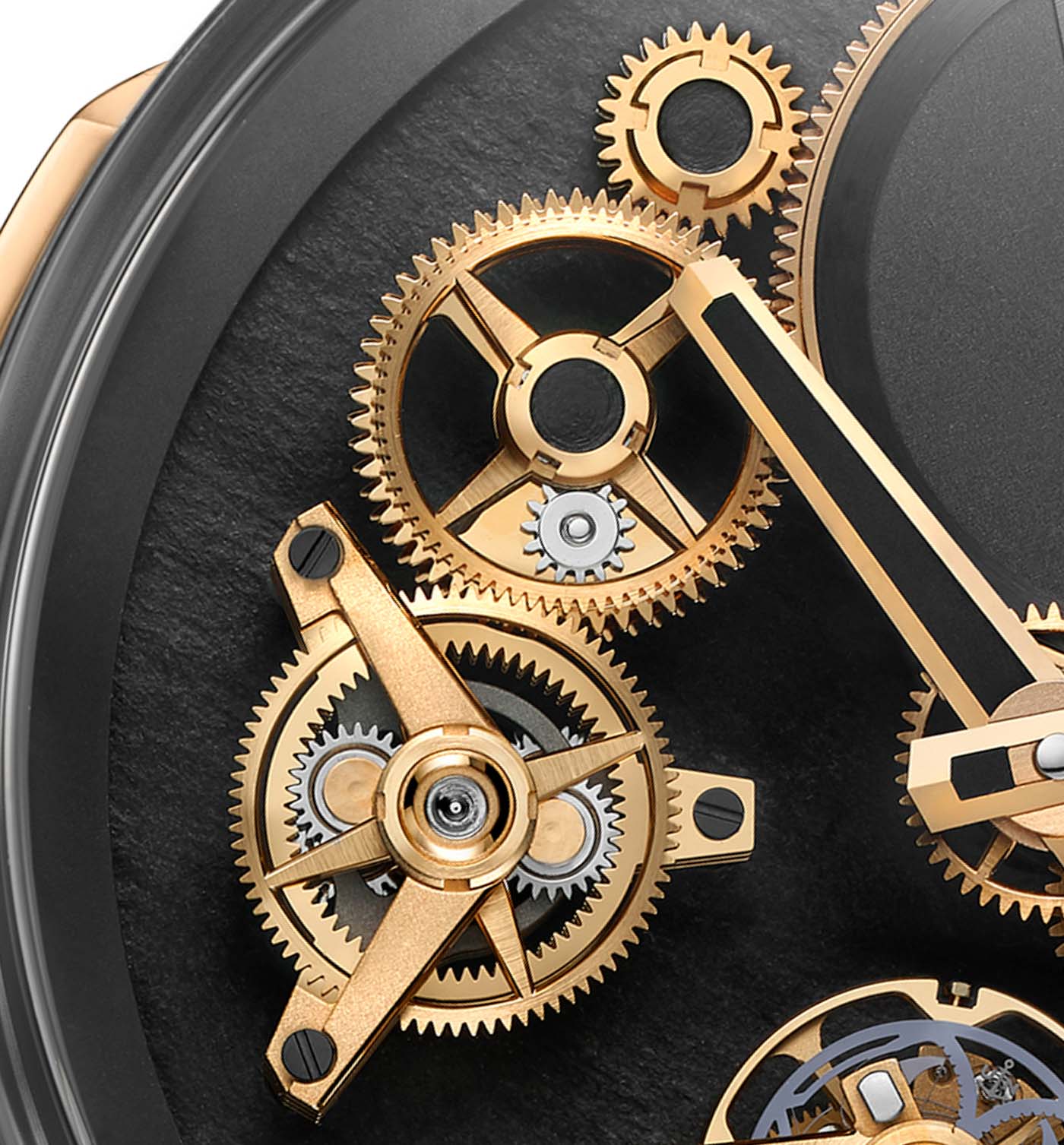 A closer look reveals a yet more interesting wheel layout in the going train – not a single word about these in UN’s official communication, of course. I had to crop heavily into an official photo, so pardon the crappy resolution. What these wheels within wheels are, unless I am terribly mistaken, are reversing wheels. In my mind, that lowest, larger wheel on the picture above, is part of the going train and is rotating in one direction, but its pinion is required to rotate in the opposite direction. Therefore, the two silver wheels inverse its rotation, hence moving the pinion in a way that is required by some other wheels that are, again, hidden by the slate dial. What the silver wheel inside the larger wheel one above this does, I am note entirely sure about – it could perhaps have the same functionality, but I struggle to determine where exactly it sits in that stack and what it drives/is driven by. Still, understanding the risk of deeply embarrassing myself if I’m wrong with the above, I at least tried to explain what these weird wheels-within-wheels do. 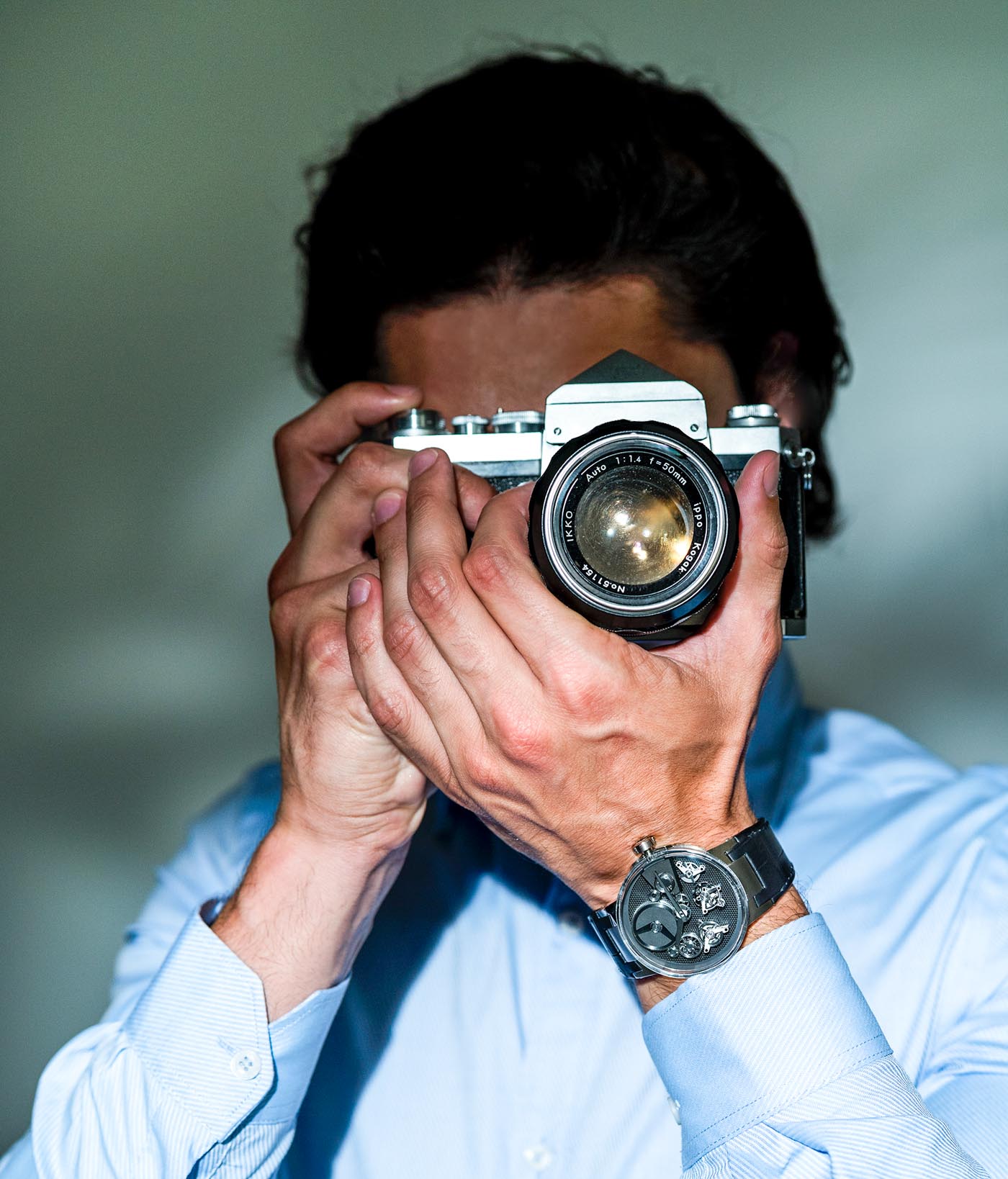 Here is a picture of a man taking a photo with a scratched up lens attached to a de-branded camera, wearing the watch with floating wheels in it. I felt it only right to include this, as this was important enough for the brand to put into the press kit – whereas actual information on the movement was not. 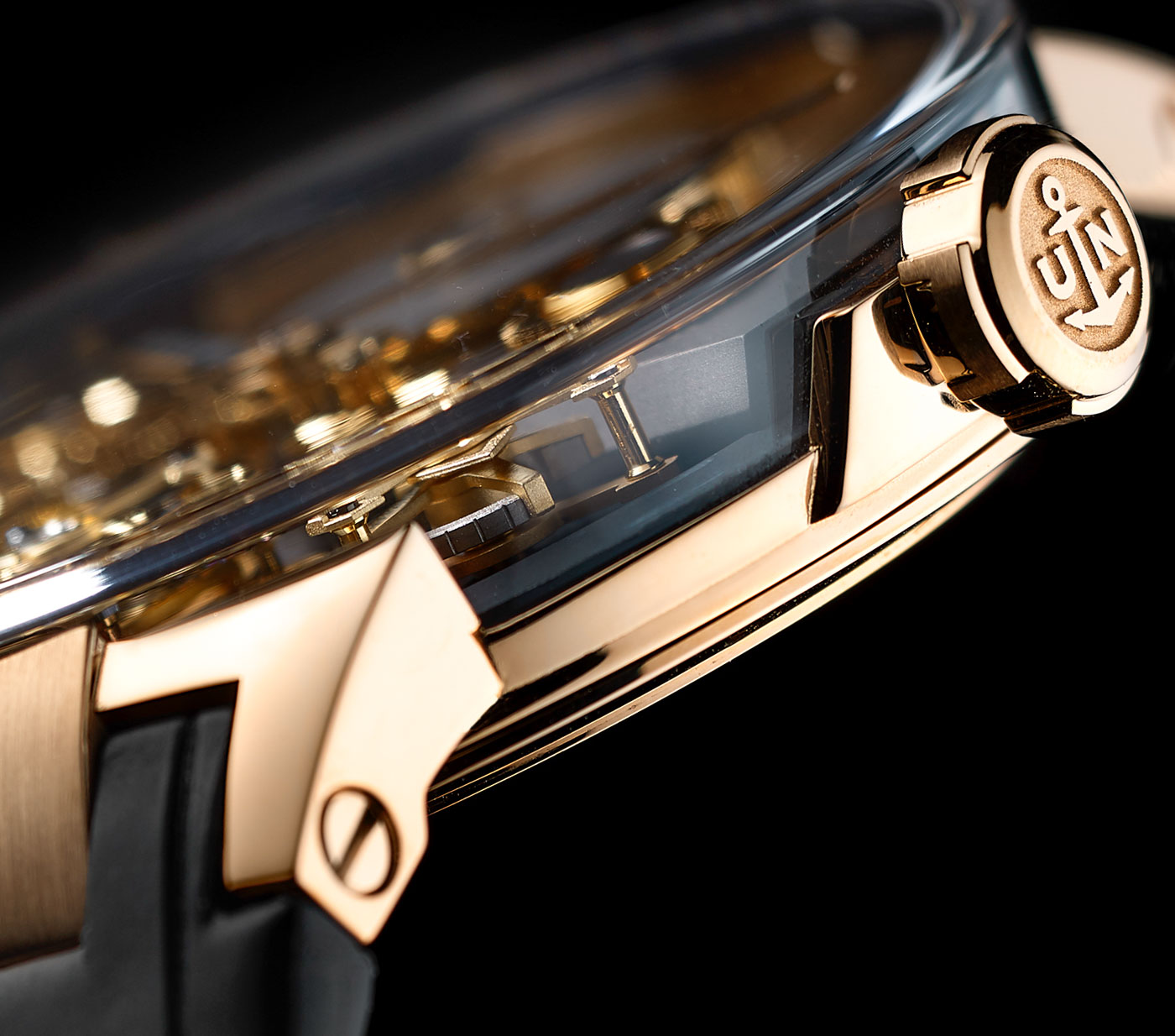 Ulysse Nardin is particularly proud of the “Ultra box-domed sapphire glass” crystal on the Executive Tourbillon Free Wheel, and it sure does look amazing in the official images. It is like an aquarium for watch parts, that, like fish, seem to float around joyfully in their safe space, shielded away from the outer world. Naturally, it allows for a candid side view at the arrangement of the dial and its many different components. What I can especially appreciate is how light and airy the watch looks – it’s not another beast-looking thing, but something with a fair number of refined elements to it. I like the small crown guards, if we can call them that, the polished, angled lugs, and the many tiers of the case side and case-back.

Other cool features include the power reserve indicator, that sits at the 4 o’clock position of the dial and has a rotating 3/4 cam on it that should help display however much is left of the power reserve. The cam rotates, and the pointy bit inside the “boomerang,” well, points. The next cool feature is the extended, 7-day power reserve that appears to be supported by either one very large mainspring, or two stacked barrels. Last, but certainly not least, there’s Ulysse Nardin’s signature low-friction silicon escapement, prominently displayed on top of the flying tourbillon. 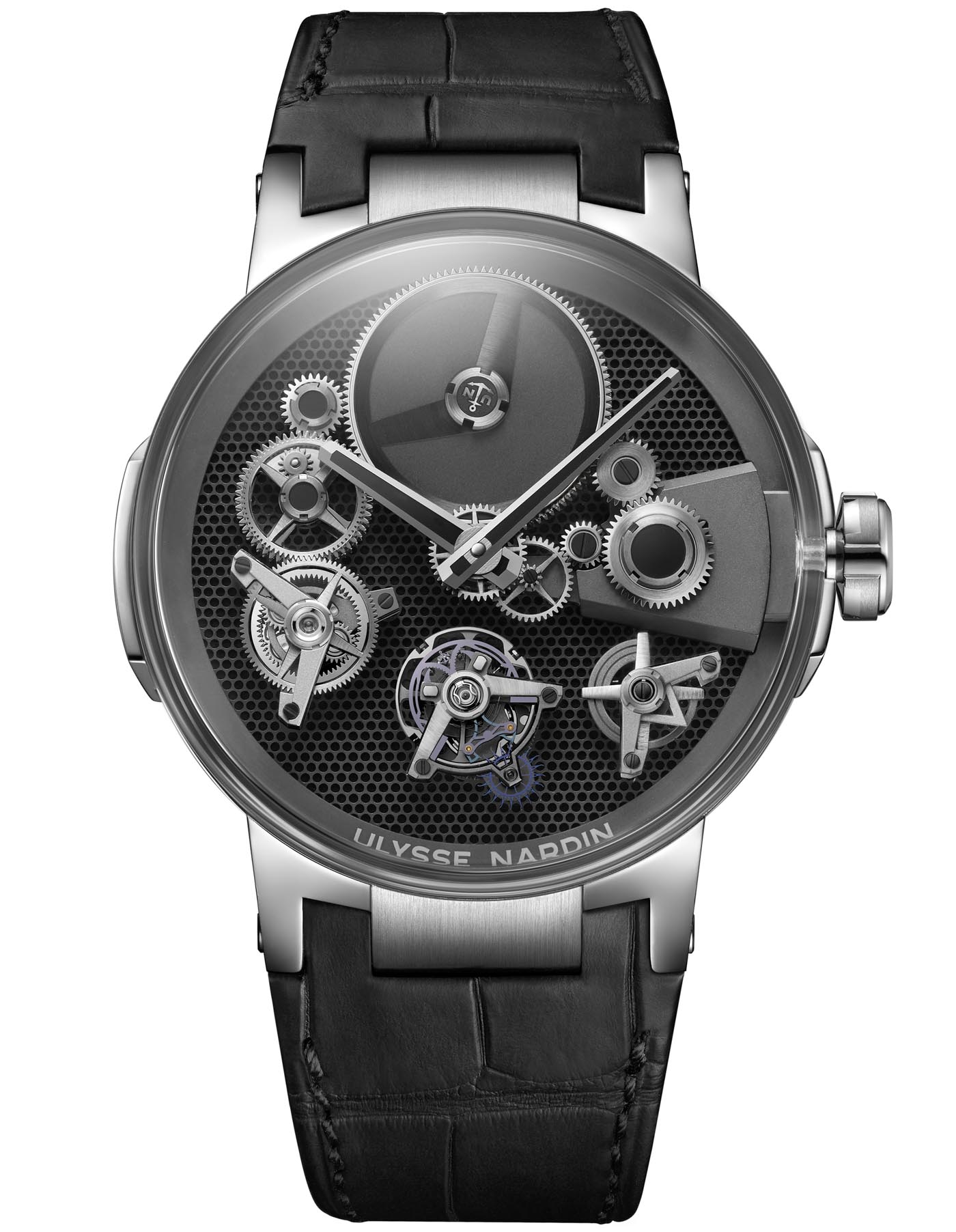 All this is wrapped in a 44mm-wide case that, from the looks of things, could have been a lot smaller in diameter – and, based on the images (since no official figure has been provided on this), case thickness seems to be perfectly reasonable as well. As the big watch trend turns and we see more reasonably sized watches, I can’t wait to see these high-tech watches come wrapped in a case that is as small as it will go – since that’s still going to be pretty large. Make this into a 40 or 42mm-wide case and, to my eyes at least, it looks more a timeless part of horology, than an ultra-modern, space age halo exercise. 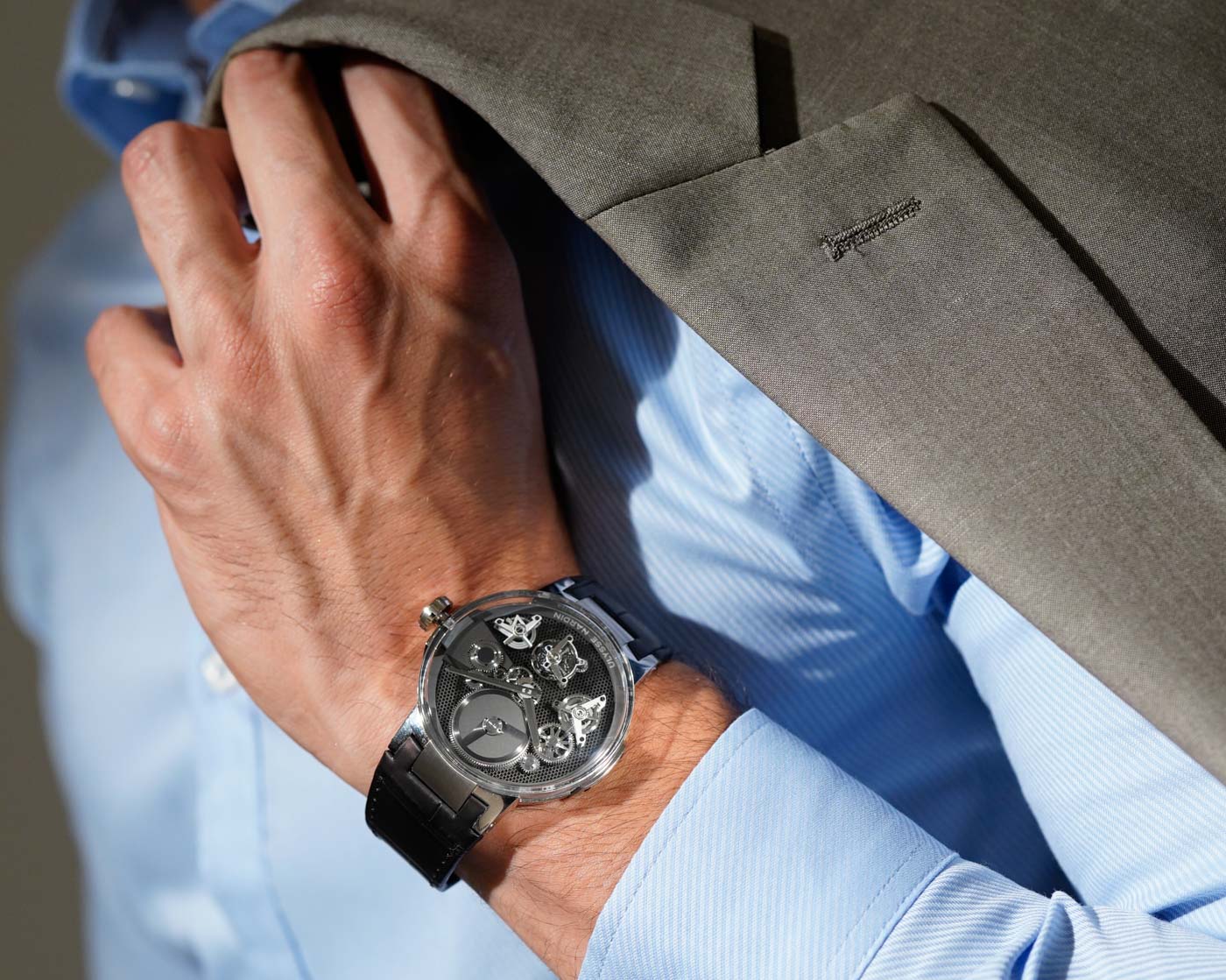 After all this has been said, I must note that the Ulysse Nardin Executive Tourbillon Free Wheel is one mysterious, and consequently fascinating concept – precisely the sort that we have been seeing less and less of in recent years. How it actually works we’ll have to learn directly from someone who’s been involved in the development and making of this great watch. Should be fun to photograph as well, so I really can’t wait to see it in the metal – at SIHH 2019 the latest, but hopefully sooner.

Fortunately for everyone involved, I didn’t have to use my imagination to determine the price of the Ulysse Nardin Executive Tourbillon Free Wheel: in 18ct rose gold price is $96,000 and in 18ct white gold it costs $99,000. Refreshingly, it is not even a limited edition. ulysse-nardin.com