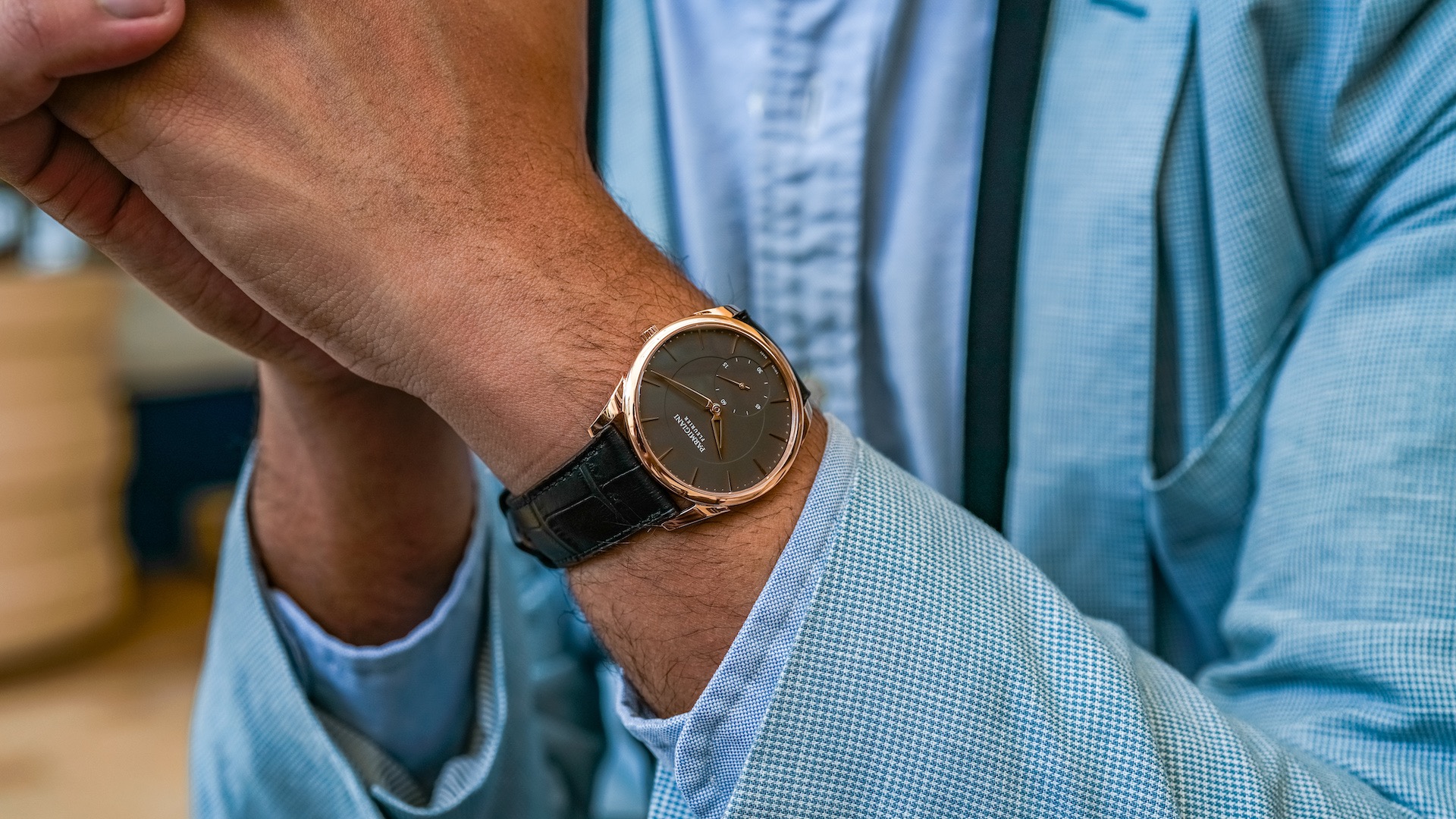 The Parmigiani Fleurier Tonda 1950 has been around for just under a decade, and this year the brand gave this watch a subtle but visually significant dial refresh. The Tonda (“round” in Italian) line is Parmigiani’s broadest, as it basically encompasses all of the round-cased watches that aren’t in the Toric collection (which themselves are easily identified by the hand-knurling on their cases). Named after the year Michael Parmigiani was born, the Tonda 1950 is the quintessential Parmigiani Fleurier dress watch, and the new version is a welcome update with new hands, brand insignia, and dial touches. 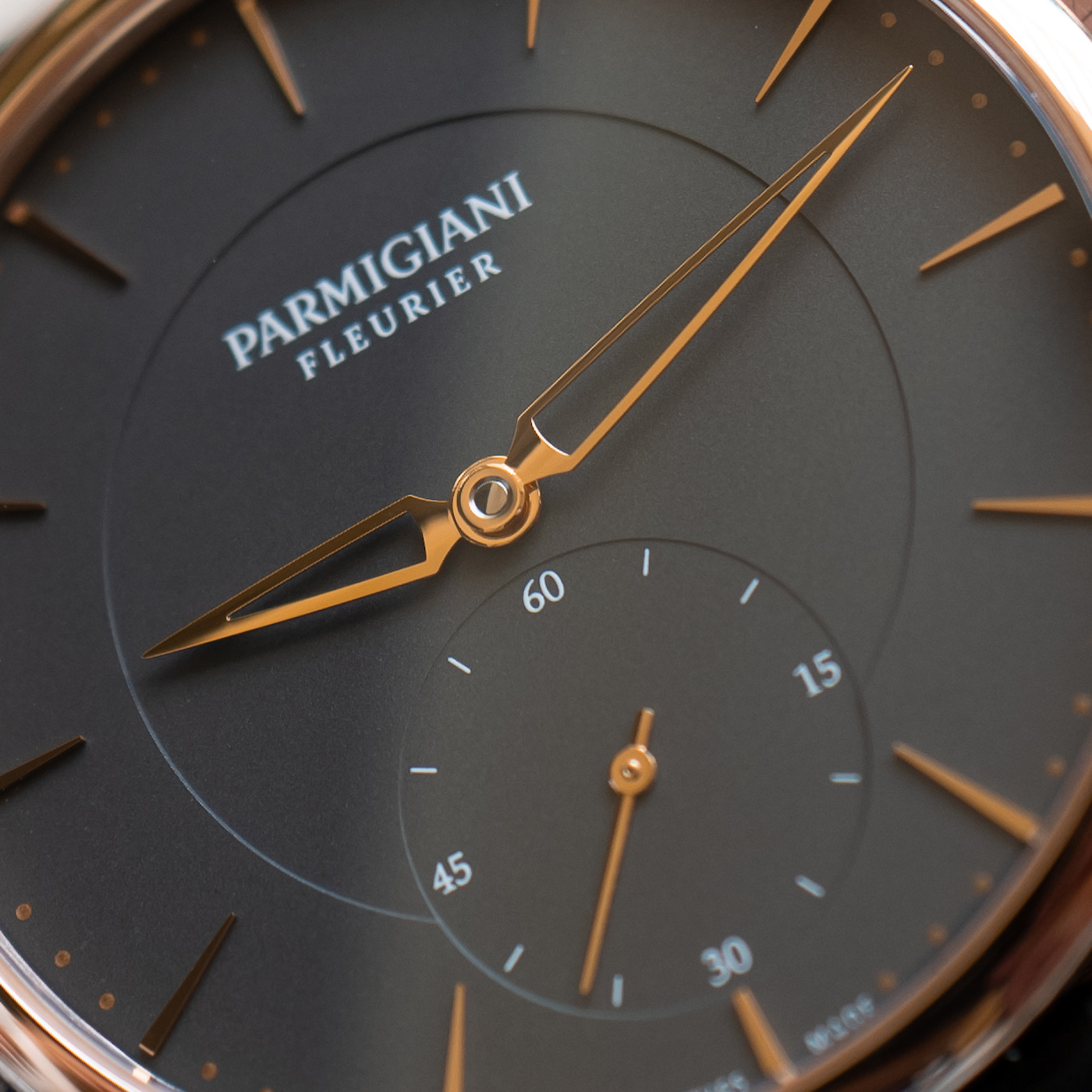 The most immediate change comes to those “Delta-style” hands that are now skeletonized and have lost the lume. These new hands reveal the dial below and look absolutely fantastic on the rose-gold with slate-gray dial I handled, though there are two more variations of this specific dial update with a blue and a light cream dial. I say “this specific dial update” because these new hands have only arrived on these precious steel versions. The skeletonized hands aren’t available in the steel version, and it’s very possible they may never be. 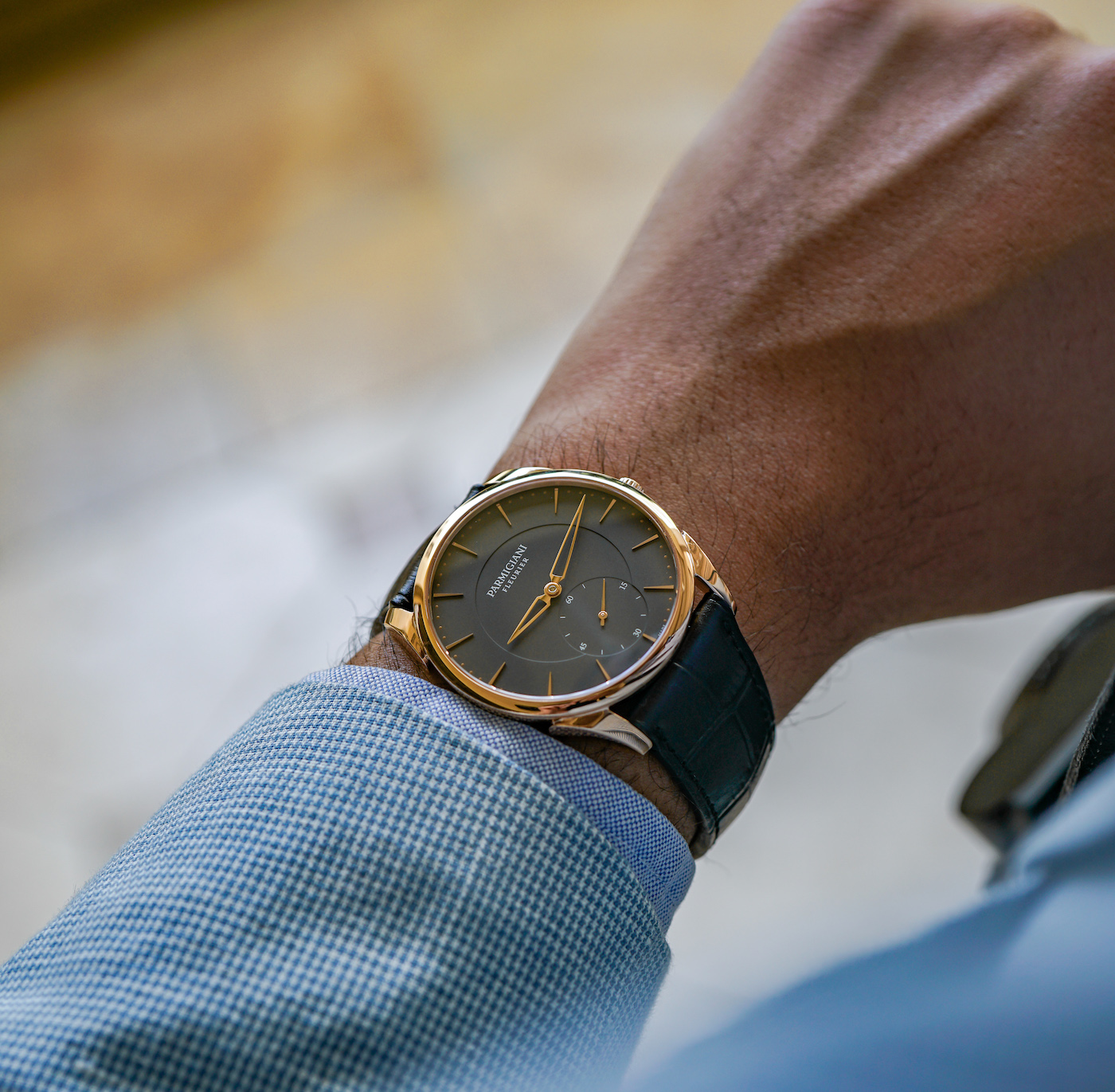 There are, however, two steel Tonda 1950 versions in either the slate gray and blue dial that have these refreshed dials, with the notable exception of the skeletonized hands. Note that the steel version is slightly bigger, at 40mm-wide and 8.2mm-thick. The 40mm Tonda 1950 uses the PF702, as opposed to the PF701, the latter of which boasts a precious metal micro-rotor. 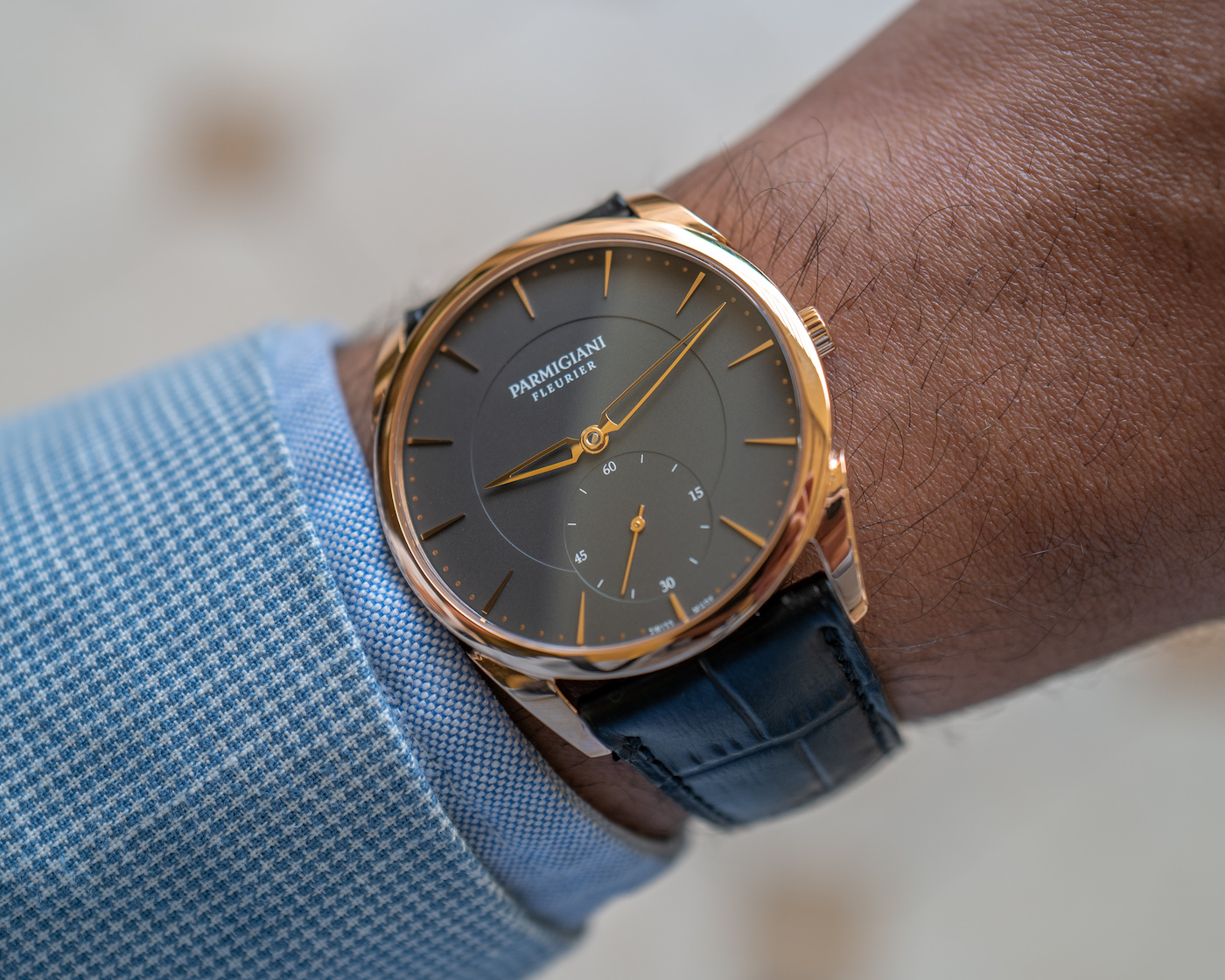 Back to the watch at hand. So, what’s new besides the hands? Well, the Parmigiani Fleurier text is bigger and loses the oval around it. You’ll notice the addition of a dial circle that is reminiscent of the Hermès Slim d’Hermès dial (which makes sense, as Hermès is a part owner of Manufacture Fleurier). It adds some layering and dimension to the dial, as the outermost part recesses to the center of the dial, and the seconds sub-dial at 6 o’clock recesses further. 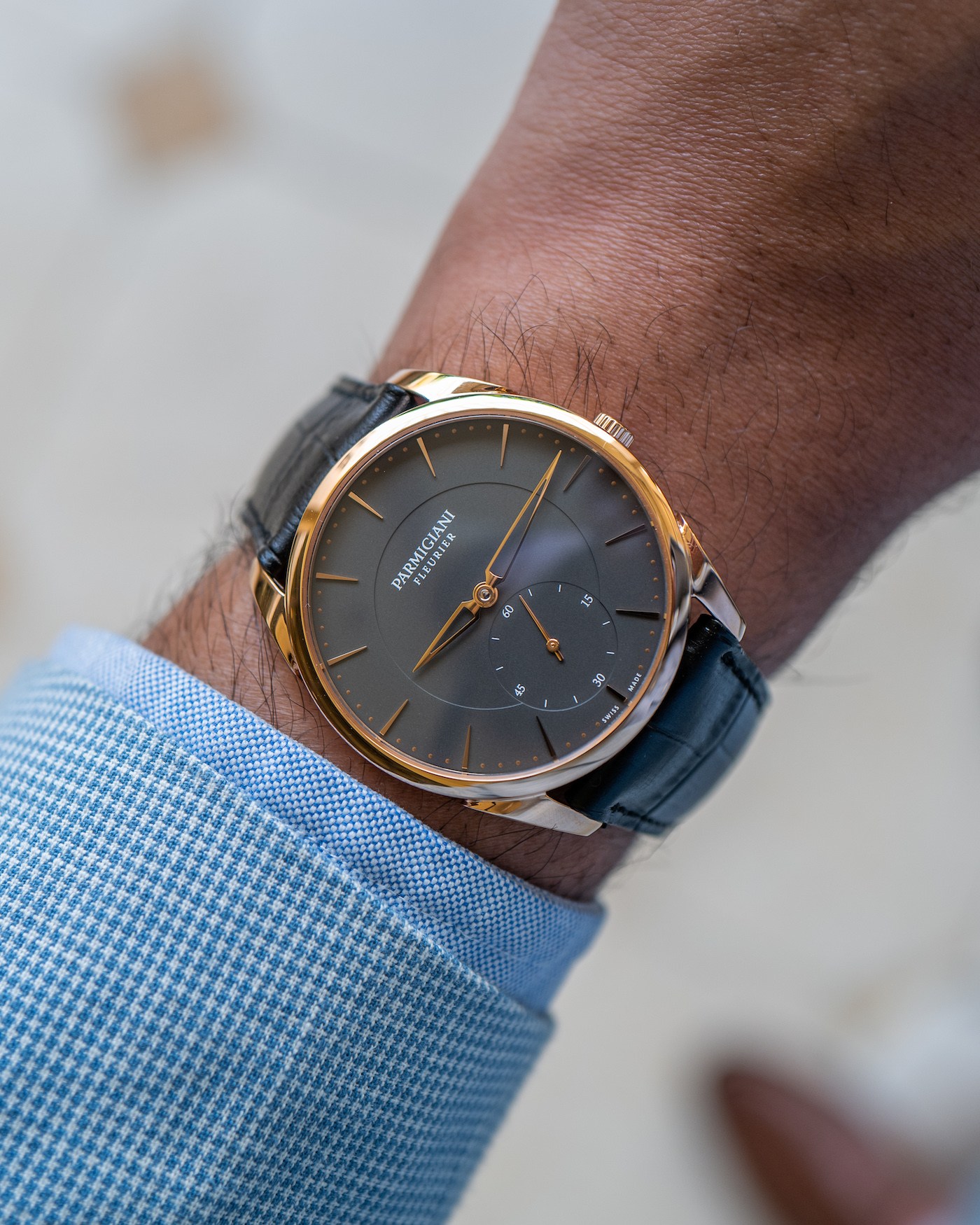 The seconds sub-dial gets an update as well, with Arabic numerals for 15-, 30-, 45-, and 60-second indications. It’s a small change, but it definitely lends a subtle bit of contemporary style and design to the overall dial aesthetic.

And that’s about it as far as dial changes to the Parmigiani Fleurier Tonda 1950 collection go. The new hands look amazing, and I hope we see more of this bigger new logo-style, sans oval, on other pieces from the brand. 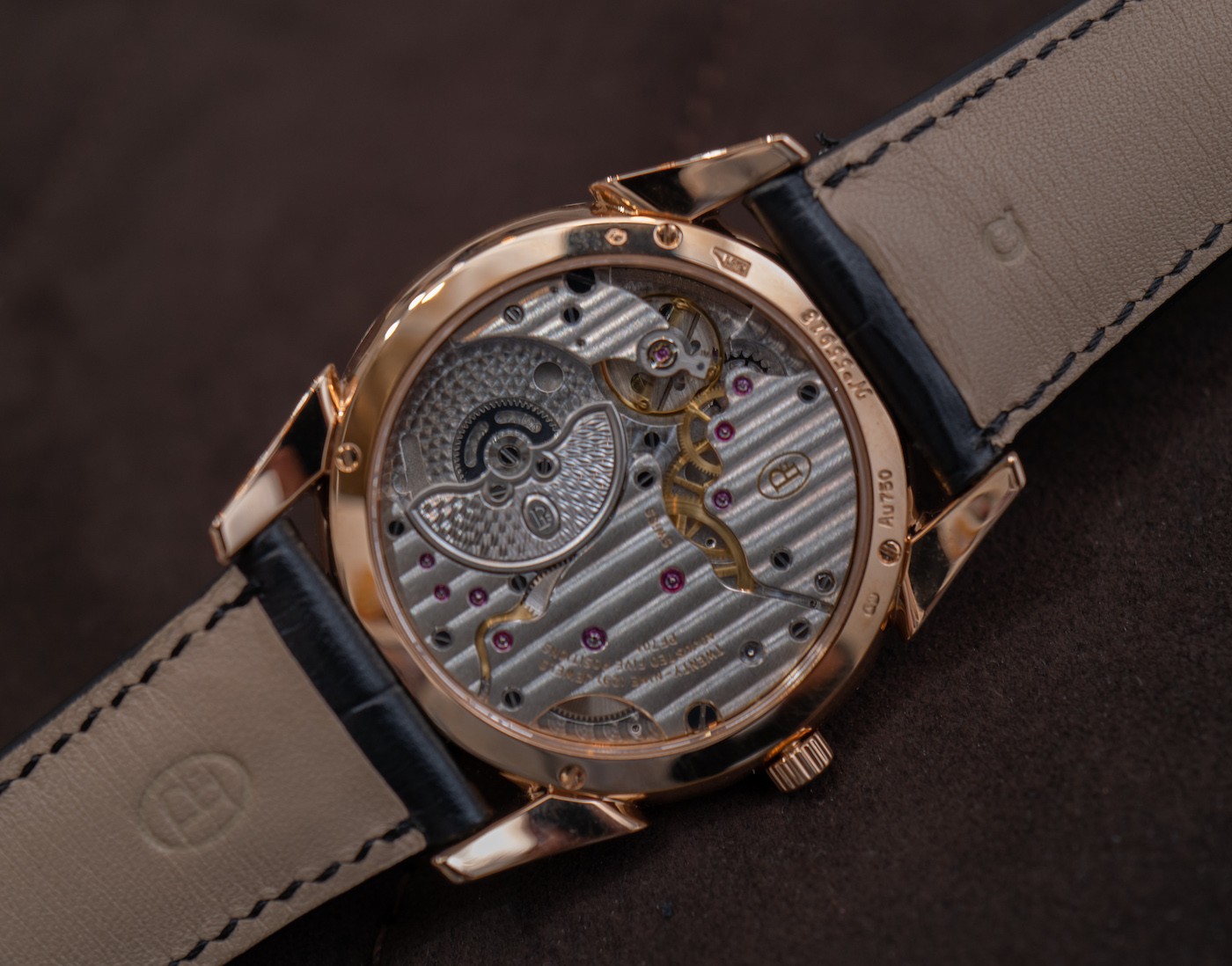 What’s unchanged is the 39mm-wide case (with those immediately recognizable teardrop lugs) that sits just 8mm-thick on the wrist. Turning the case around still reveals that in-house PF701 manufacture movement with its hand finishings and, of course, that stealthily decadent platinum micro-rotor. The in-house PF701 movement operates at 21,600vph and has a 42-hour power reserve.

Finally, the watch comes on an Hermès Havana alligator strap with a rose-gold clasp. 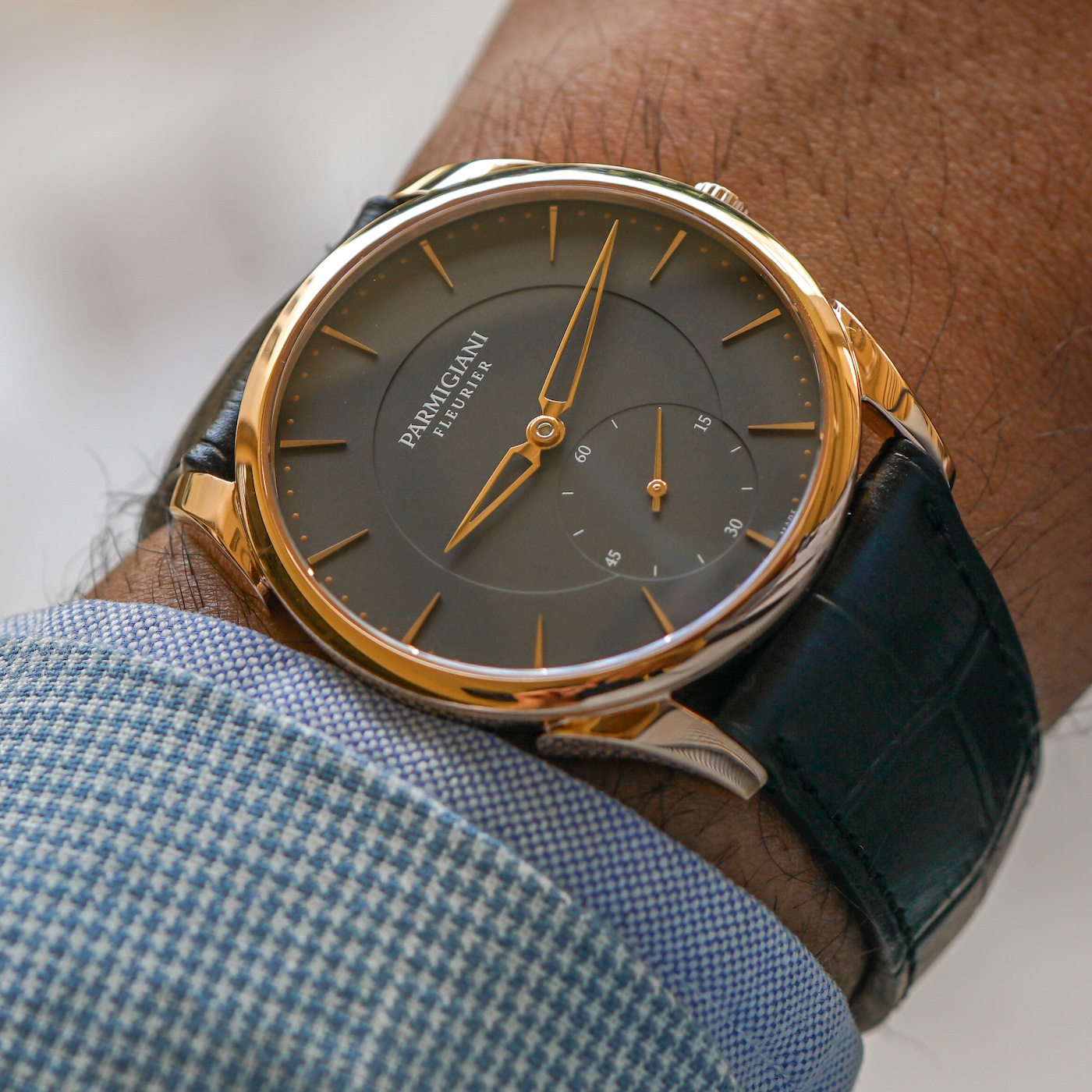 As previously mentioned, the Parmigiani Fleurier Tonda 1950 with new dial and skeletonized hands is only available in a rose-gold case version — so far, at least. The steel version without the new handset is priced at 11,900 CHF. However, the new Tonda 1950 you see here and discussed in this article is priced at 19,500 CHF, which reflects a relatively small 800 CHF premium over the version with the older dial. You can learn more at parmigiani.com.