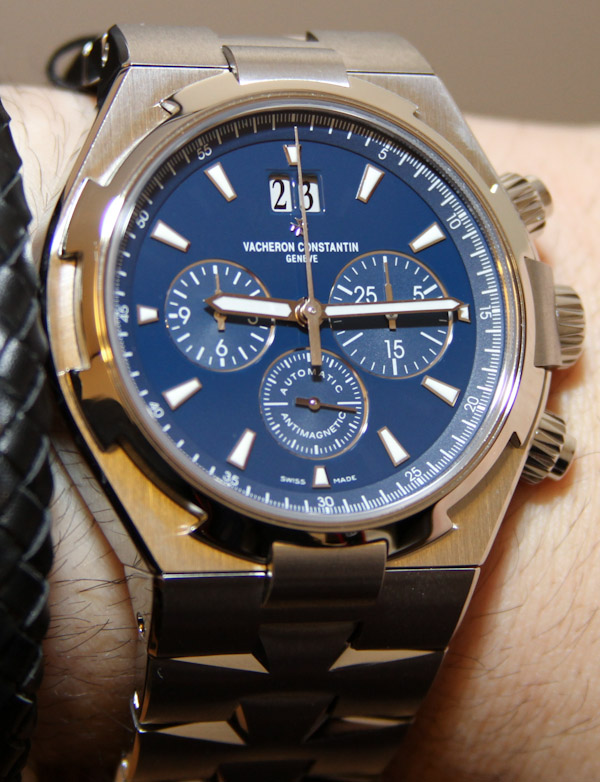 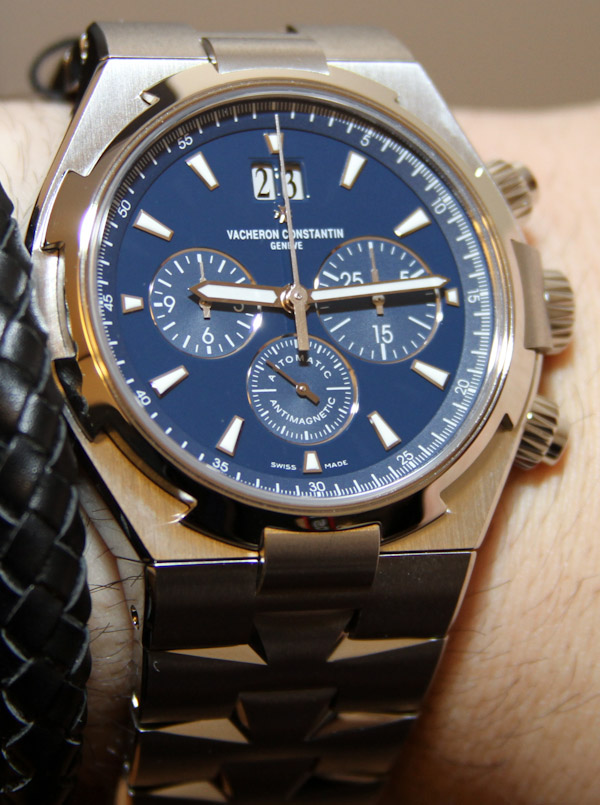 Some people will probably tell you that a “sporty Vacheron Constantin” is an oxymoron. It sort of is, but that hasn’t stopped a lot of traditional formal watch makers from producing high-end sport timepieces meant more for casual wear than actual active abuse. Sometimes I want to think of a sport watch as something that is meant to go deep, go high, or be beaten up. Anything in an 18k rose gold case with an alligator strap probably wouldn’t volunteer for all that. Then again, pieces like this Vacheron Constantin Overseas Chronograph will jump at the chance to sit on your wrist whilst you cruise down a country road in a grand tourer. What, your Sundays aren’t like that?

As we all await a refreshed version of the Overseas to be released, we continue to see slight revisions to the existing formula trickle out of the house of Vacheron. For 2012 we get one with a lovely blue dial – which makes a nice contrast with either the steel or rose gold case in quite the regal manner. Blue dialed steel sport watches are not common, but they aren’t bad looking at all. In person the blue color Vacheron Constantin uses is bright and cheerful, without any cheesy electric vibes. 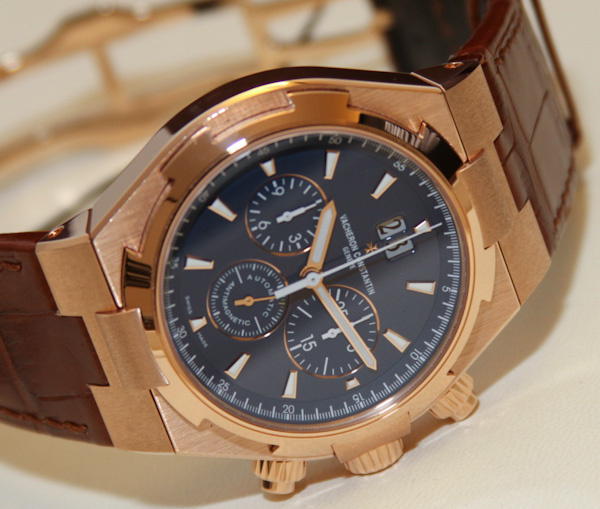 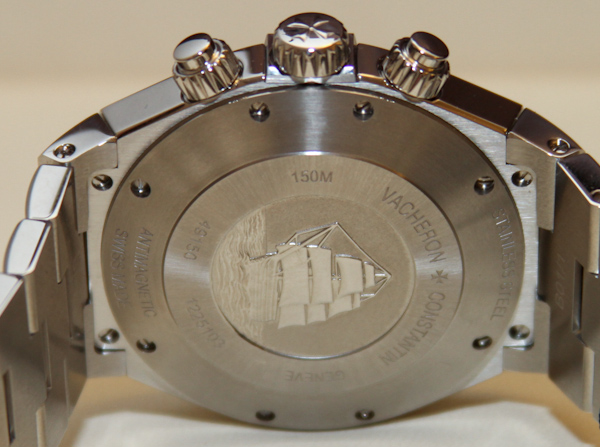 The Overseas models always fascinated me like a strange purebred cat that didn’t necessarily have a reason to exist in nature, but you appreciate them nonetheless. With its rather strong anti-magnetic case properties and curious “150 meters” of water resistance combined in a thick steel case, an argument could be made that if you wash away all the Vacheronity of the watch, it could make a nice high-end weekend timepiece with jeans (gee I love writing those long sentences). Ah, but it does have all those Maltese Cross elements and historic Vacheron Constantin name on the dial. Even the bracelet is designed to look like Maltese Cross logos stacked on top of one another. At least someone had the wisdom not to include a tachymeter scale on the dial. Screw-down pushers for the chronograph are the last hint that the Overseas has absolutely no desire to show up to the same parties as Vacheron Constantin Patrimony collection pieces.

My first experience with an Overseas model was in law school. A friend of mind came to class one day with a “nice watch” his parents back in Taiwan bought him. It was an Overseas on a strap. I thought it was pretty cool even if he didn’t know too much about it. He had an appreciation for it, but wasn’t a huge enthusiast. For me it became clear that if you absolutely must have a Vacheron Constantin watch, but nothing else in their collection fits your personality, then the Overseas was the model for you. So I guess the collection does have a good reason for existing.

The 42mm wide case is given wide lugs for an ample wrist stance. The size feels good and wears larger than say a traditional Audemars Piguet Royal Oak or Patek Philippe Nautilus. The bezel with its polished Maltese Cross-like design will either appeal to you or distract you. The case is actually very nicely made. Good detailing with a lot of wonderful beveling and finishing. It isn’t just attractive but on the wrist it is comfortable. Kudos to Vacheron Constatin’s refinement department (I would really love it if that existed). 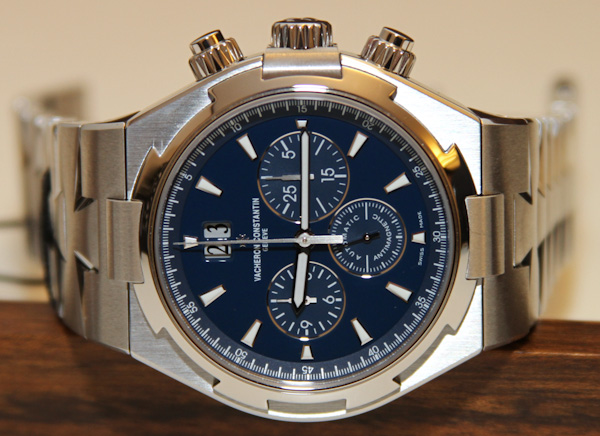 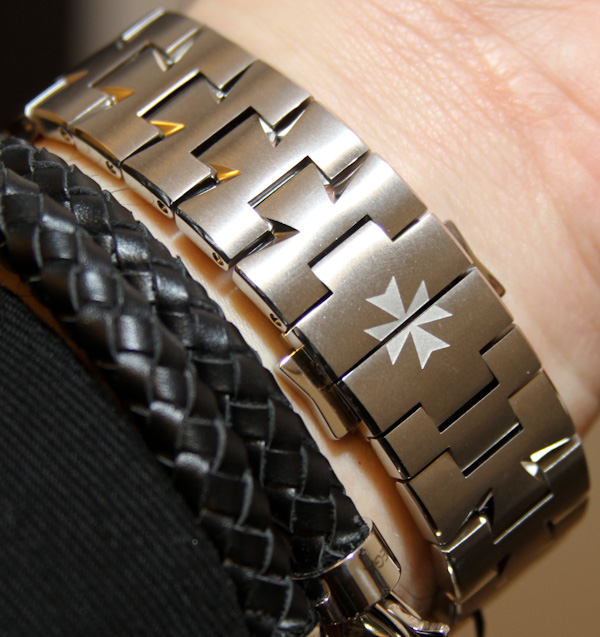 The dial of the Overseas Chronograph and other Overseas models is simple compared to the design of the case. It isn’t bad, but it doesn’t excite me on a chemical level. I think the hour and minute hands need to be a bit longer, and there is a bit of room for pizazz. At the same time the dial is brutally effective and quite legible. There is as much Omega Speedmaster DNA in this dial as there is almost 300 years of watch making history.

Inside of the Vacheron Constantin Overseas Chronograph with Blue Dial (ref. 49150/B01A-9745) is the caliber 1137 automatic chronograph movement, which is a base Frederic Piguet. That isn’t an in-house made movement, which for some people defeats the purpose of getting a Vacheron Constantin in the first place. F. Piguet is however the high-end movement making division (also called Blancpain Manufacture) of the Swatch Group. Never mind that the Richemont Group owns Vacheron Constantin, but F. Piguet movements are pretty nice and nothing to complain about. This is one of only one or two currently made Vacheron watches with the caliber 1137 movement inside of it.

My favorite detail of the Overseas is the engraving of the old-timey long-distance sailing ship. Be it a war or merchant ship, it certainly does espouse the notion of being an “overseas” explorer. It is a nice romantic touch to seal the package. Price for this blue dial version (in steel) of the Vacheron Constantin Overseas Chronograph will retail for about $20,000. More for the 18k rose gold version of course.