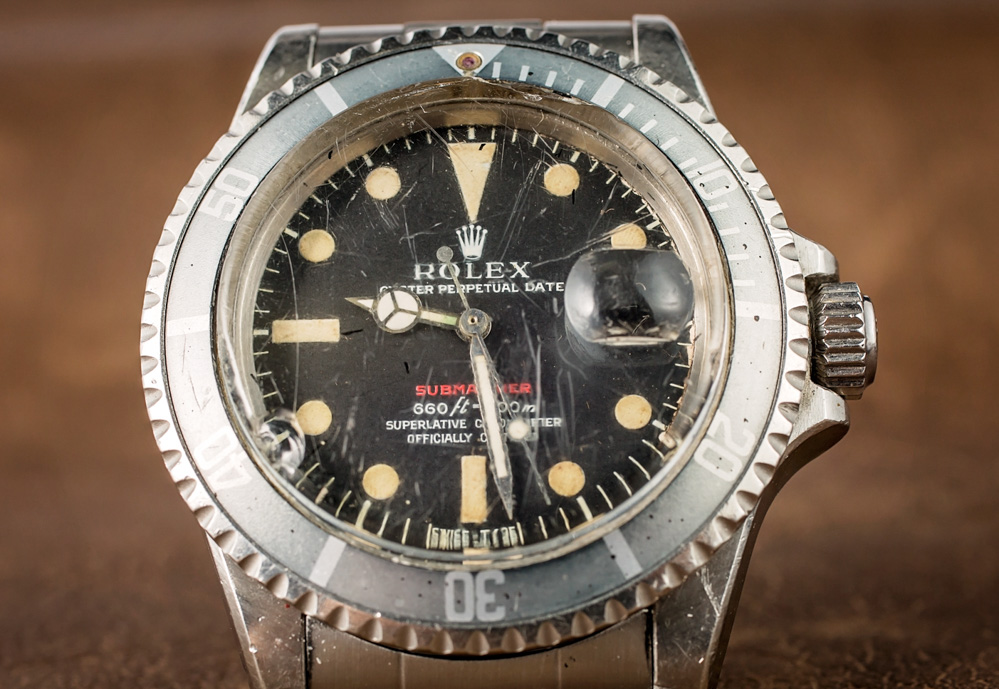 As Rolex’s most popular line of watches, the Rolex Submariner gets a fair amount of attention – both from contemporary enthusiasts and vintage collectors alike. Despite having a design that has remained largely unchanged since its initial introduction in 1954, Rolex’s Submariner watches – especially well-preserved vintage references – frequently receive the most attention (and brings in the highest prices) at auction. 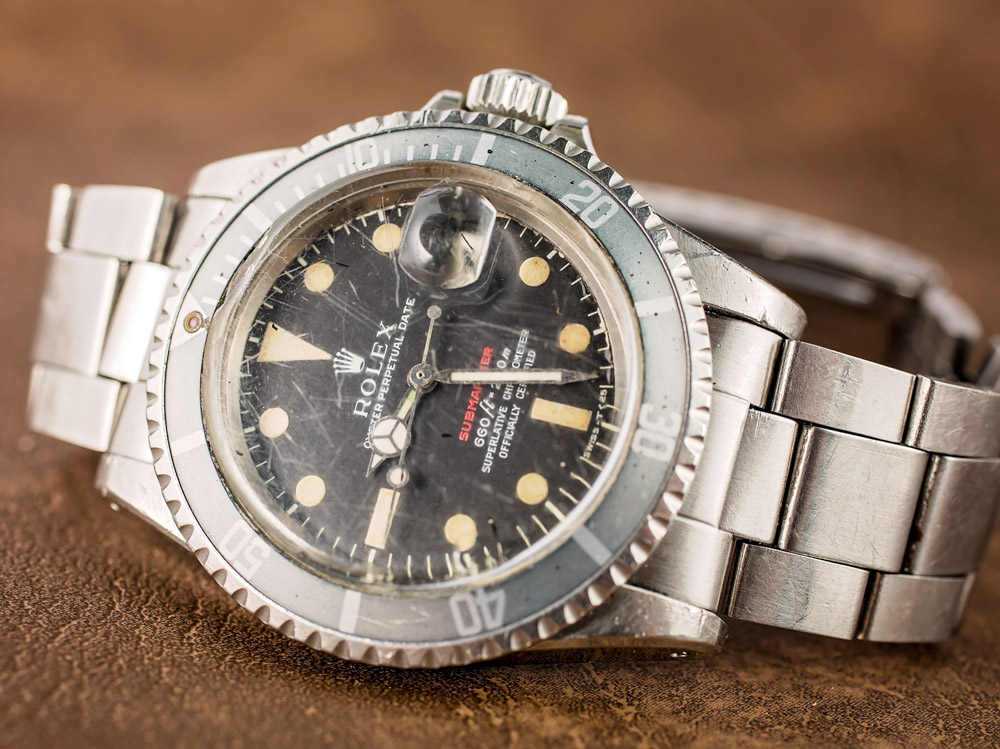 Not all Rolex Submariner references are considered equal, and it is the subtle differences between them that ultimately accounts for tens of thousands of dollars at auction. Collectors generally seek out references that were either the first (or last) to feature a specific characteristic, or references that have some slight variation that helps set them apart and makes them unique. If the watch satisfies both of these requirements, such as the reference Rolex 1680 “Red Submariner,” then it is almost certainly going to be a target for collectors. 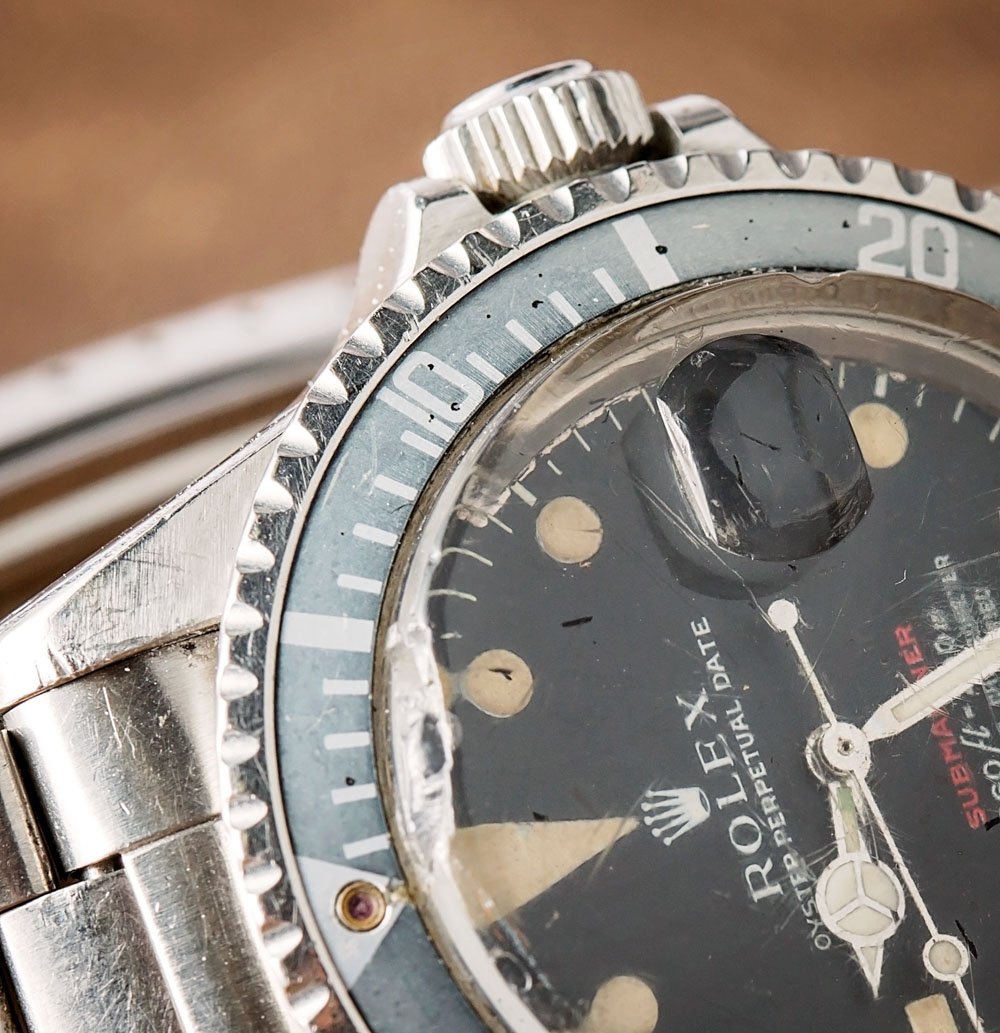 At the heart of the reference 1680 Rolex Submariner beats Rolex’s 26-jewel caliber 1575 movement. The reference 1680’s 40mm stainless steel case offers users 200 meters of water resistance, which is more than adequate for the majority of real-world applications. Some early examples of the 1680 Rolex Red Submariner feature a movement that is stamped as a caliber 1570 on the lower bridge; however, the movement itself is actually a caliber 1575 since it has the addition of a date complication.

For some, the Rolex Red Submariner represents the entry point into serious Rolex collecting. Produced between 1969 and 1979, the Rolex Submariner 1680 marks the addition of the date complication and Cyclops magnification lens to Rolex’s Submariner line of watches. A small batch of the very earliest reference 1680 watches featured the Submariner name printed in red ink on the dial, instead of the white ink that can be found on all subsequent models. 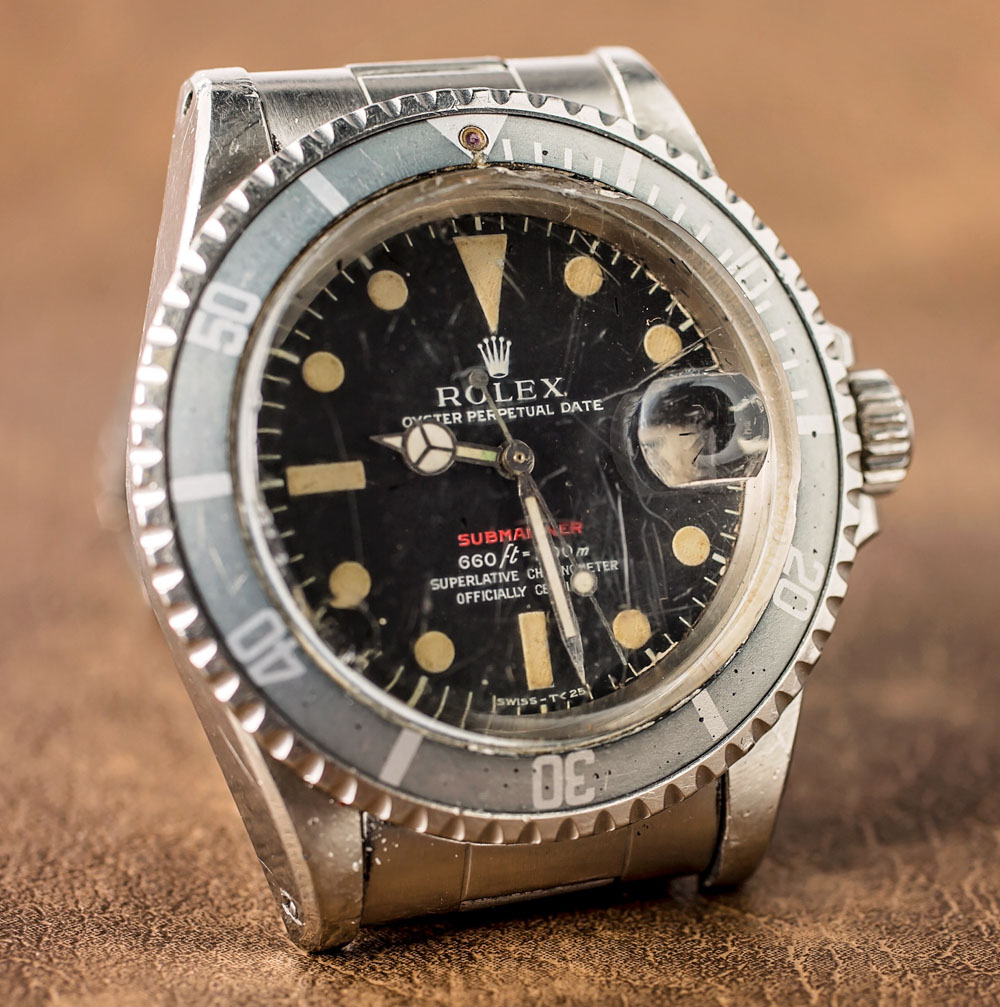 Due to their limited production numbers, Rolex Red Submariners are considered quite rare, and generally sell for significantly more than their equivalents with white text. Additionally, their rarity has only increased over the years, as it was a standard practice for Rolex to replace damaged Red Submariner dials with white-text, service dials when watches were sent in for servicing.

In the years immediately following its introduction, the Rolex Submariner was not regarded as a luxury item, but rather as a precision timekeeping device – one favored by professional SCUBA divers and members of the military. As a result of their tool-watch status, many early Rolex Submariners received a fair amount of abuse, and a relatively small number of these watches have managed to keep all of their original parts. 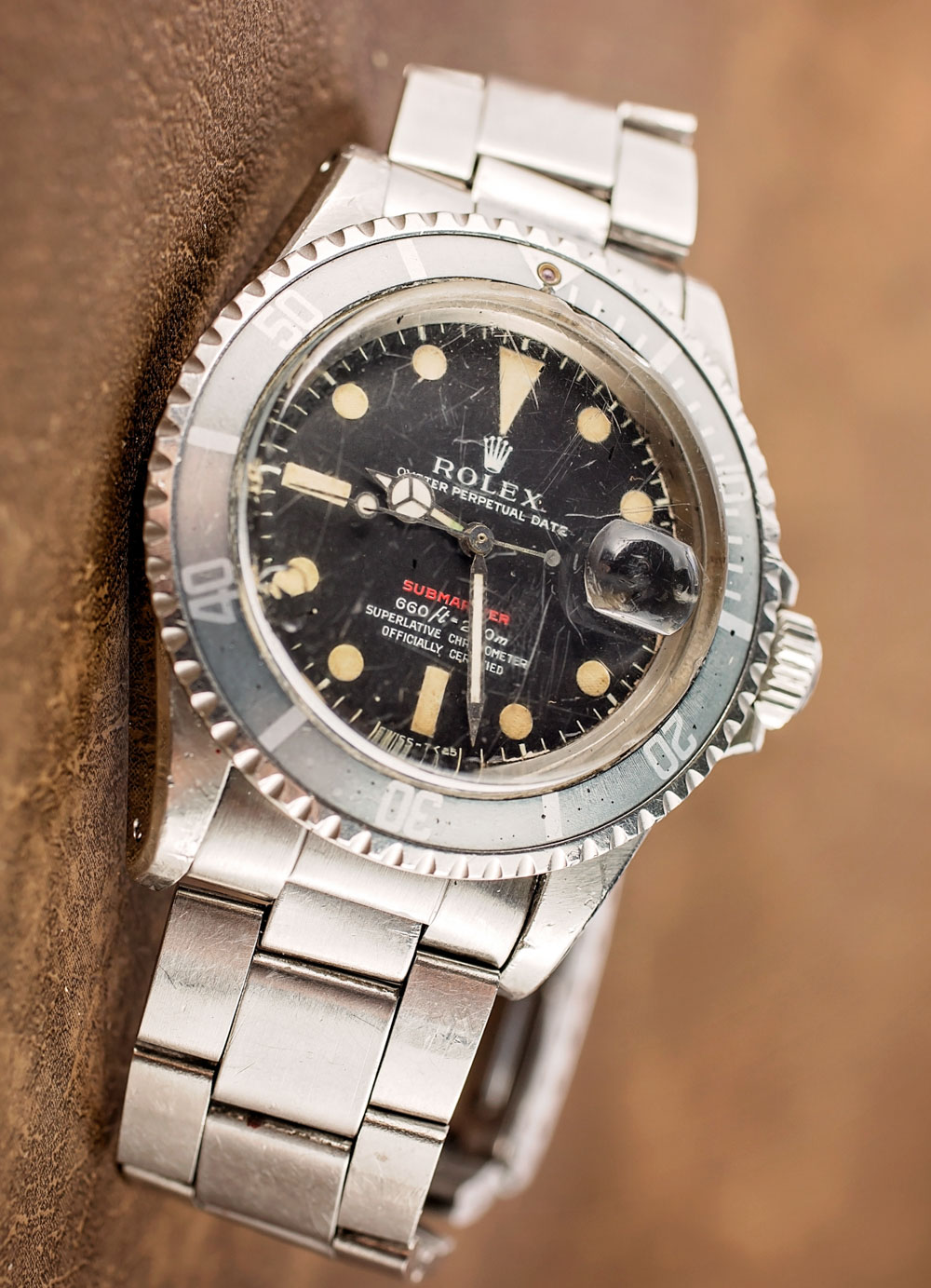 In 1969, a young U.S. Marine purchased a brand-new Rolex Red Submariner 1680 reference from an authorized dealer in San Francisco, California. That Marine wore his Rolex Submariner during the entire time that he was stationed in the Philippines during the Vietnam War, and it faithfully served alongside him, until his retirement in 1984.

After retiring from the military, the Marine continued to use his Rolex Red Submariner as his primary timekeeping device. For many years thereafter, he used this very same Red Submariner on a variety of sailing and diving excursions, and despite its age and consistent use, the watch itself remained in remarkably good condition and retained the vast majority of its original parts.

Today, that same watch serves as a fantastic example of everything a collector should hope for in a Rolex reference 1680 Red Submariner. The decades of constant use and saltwater exposure have made the black finish on the aluminum bezel insert fade to a lovely, light blue-gray color – one that can only be earned through time and wear. Additionally, the original tritium-based luminous hour markers on the dial have been entirely untouched and allowed to develop a rich, orange-cream-colored patina. 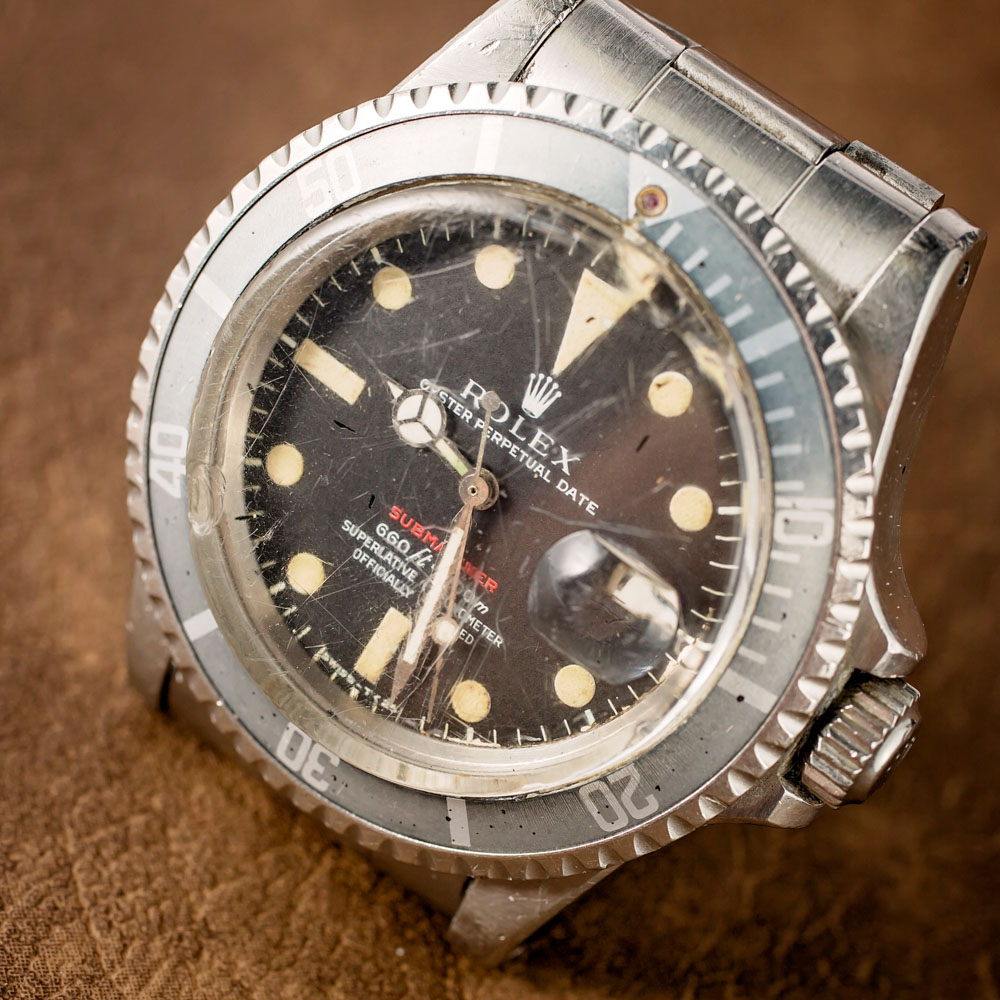 Beyond the remarkably well-aged, and well-preserved dial and bezel insert, the case and lugs are nice and thick, with zero signs of over-polishing. The knurling on the crown and edge of the bezel is still very well-defined, and it matches the sharp but unpolished lines of the case.

Part of the reason vintage Rolex Submariners are so treasured by collectors is that there are a relatively small number that remain in all-original condition. Historically, Rolex was a manufacturer of premium tool-watches, and many of the earlier Rolex Submariners ended up in the hands of military personnel, or those whose jobs required a durable, and ultra-reliable timepiece.

Due to the rough life that many vintage Rolex Submariners have lived, the vast majority are no longer in collector-worthy condition. Although their robust design and precision build quality allow them to retain their functionality over the years, many have lost some of their original parts throughout the decades.

The reference 1680 Red Submariner is one of the most iconic Rolex models of all time, and it is arguably the first reference where the Rolex Submariner starts to take its contemporary, date-displaying form. All Rolex Red Submariners will generate a fair amount of interest among collectors at auction; however, seldom does an example surface with such a complete and well-documented record of the watch’s life and ownership history.

The story of this Rolex Red Submariner’s military service perfectly illustrates why so few of these watches still remain in all-original condition today. Additionally, the story highlights Rolex’s history as a manufacturer of precision tool-watches, rather than luxury goods, giving additional historical context to this particular watch and its intended use.

A primary reason people choose to collect vintage Rolex references over contemporary models is because of the history that older, pre-owned watches carry with them. Vintage watches bring with them more than just the design and monetary value of the watch itself. Instead, they also represent a snapshot of the entire watch industry – taken from Rolex’s perspective – at a particular point in time. 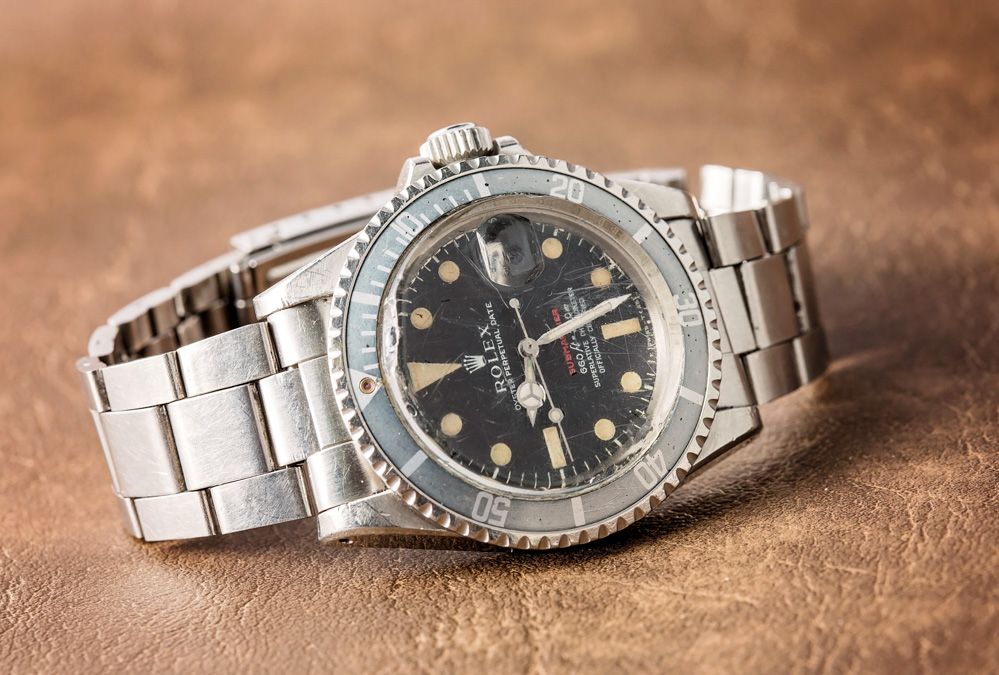 The reference 1680 Rolex Red Submariner is among the most desirable vintage Rolex Submariner references for collectors to own, and the extraordinarily well-documented history of this particular reference 1680’s military service has helped make it an entirely unique addition to any serious Rolex collection.

Paul Altieri is founder of Bob’s Watches, the leading online destination for used Rolex watches, where he created the Pre-owned Rolex Exchange Concept, which allows consumers to see both the buy and sell prices for a pre-owned watches, adding transparency to the market. Paul is also a watch collector and has many rare collectible watches in his collection.
Advertising Message