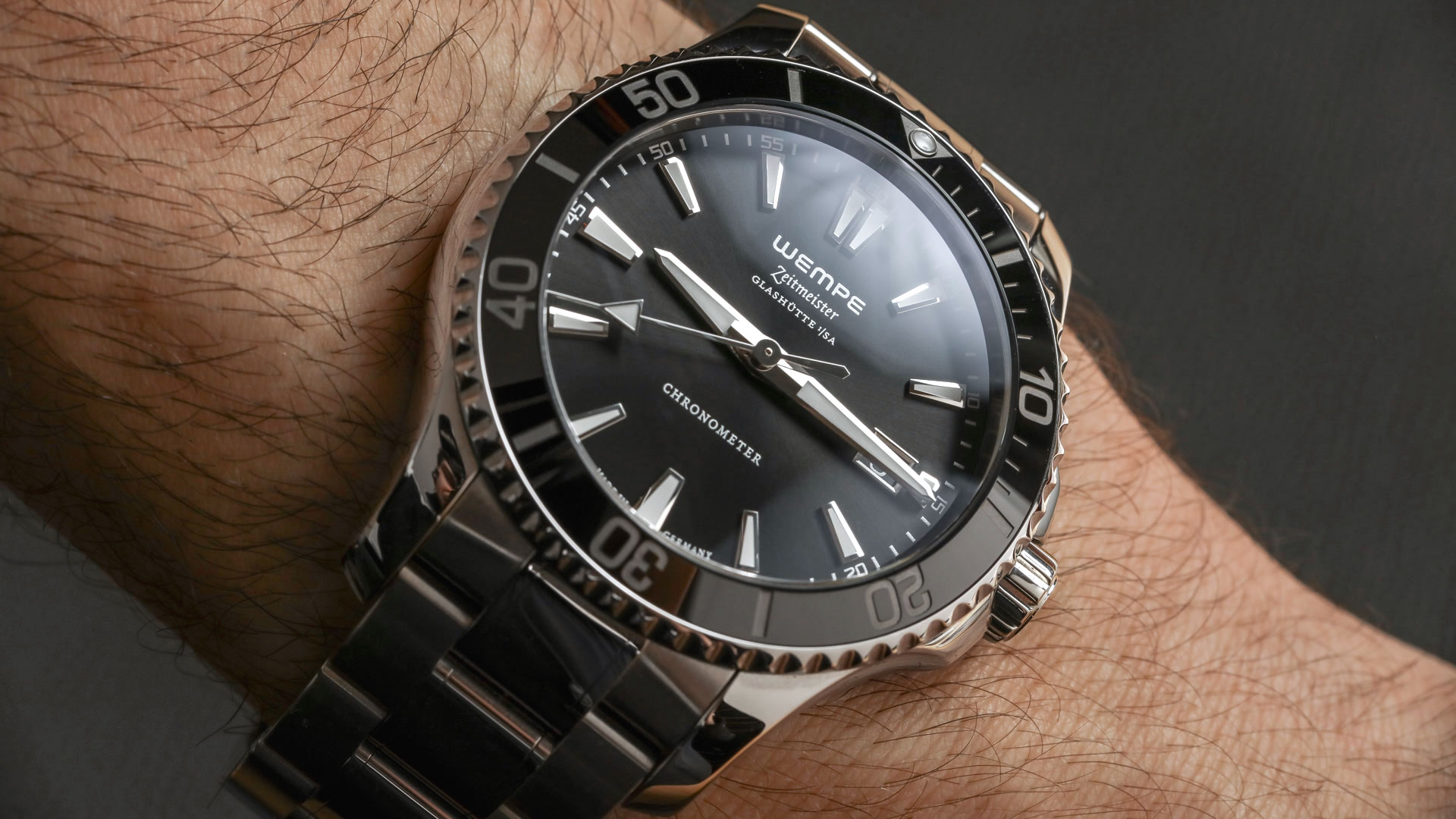 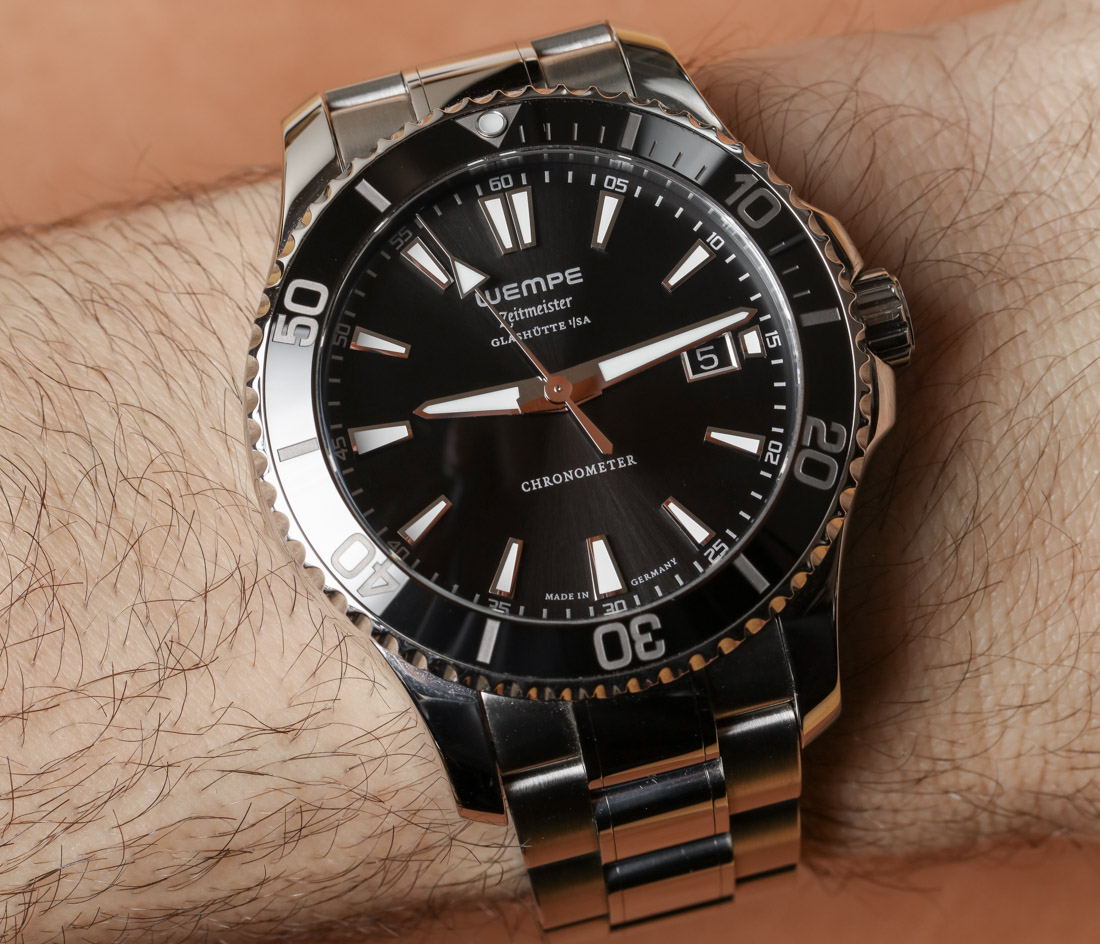 Wempe is a German watch retailer that also happens to have an in-house brand. Today, I’ll be reviewing the Wempe Zeitmester Sport Diver’s Watch, which is produced in Germany and part of an admirable collection of timepieces produced by Wempe. While it’s not a phenomenon that’s often seen today, it was historically common for jewelers to both sell watches and produce their own line as well. In my opinion, Wempe continues this rare tradition very nicely.

Wempe stores are mostly located throughout Germany, and their only United States location is located in New York City. I visited one of their stores in Berlin a few years ago, and I was quite impressed. The store had an old-school ambiance that focused on quality service and presentation, something that’s missing in many of today’s luxury retailers, for they focus almost solely on making sales. When it comes to their watches, Wempe has an impressive array of products, as all of their stores carry unique selections. Their timepiece catalog has dozens of models, ranging from elegant gold dress watches to beefy sport watches, such as this Zeitmeister Sport Diver’s Watch. From my experience, what these timepieces all have in common is an emphasis on both value and performance (durability, construction, and timing). 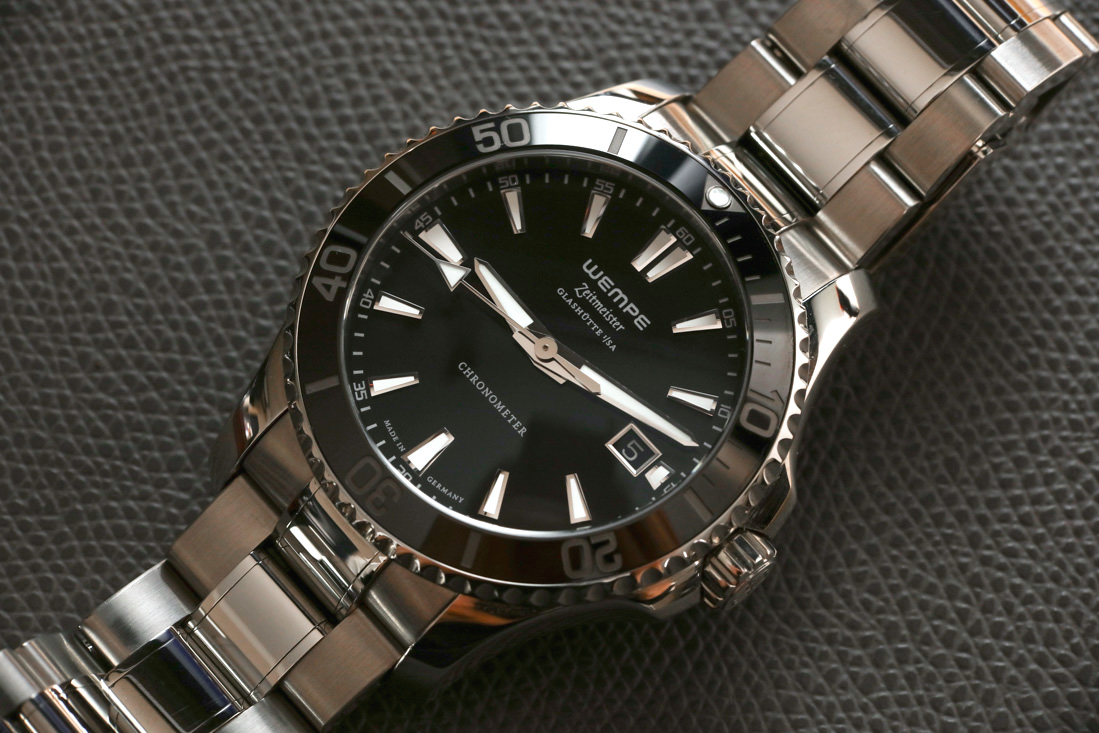 Most of their watches, for example, are certified chronometers—German Chronometers, not Swiss. German Chronometers, in addition to being actually certified in Germany, are actually subject to more stringent tests compared to their Swiss peers. Wempe owns their own observatory location in Glashütte, Germany, where they conduct the tests. Wempe also produces their watches in Glashütte, making them one of the few brands based in the region. 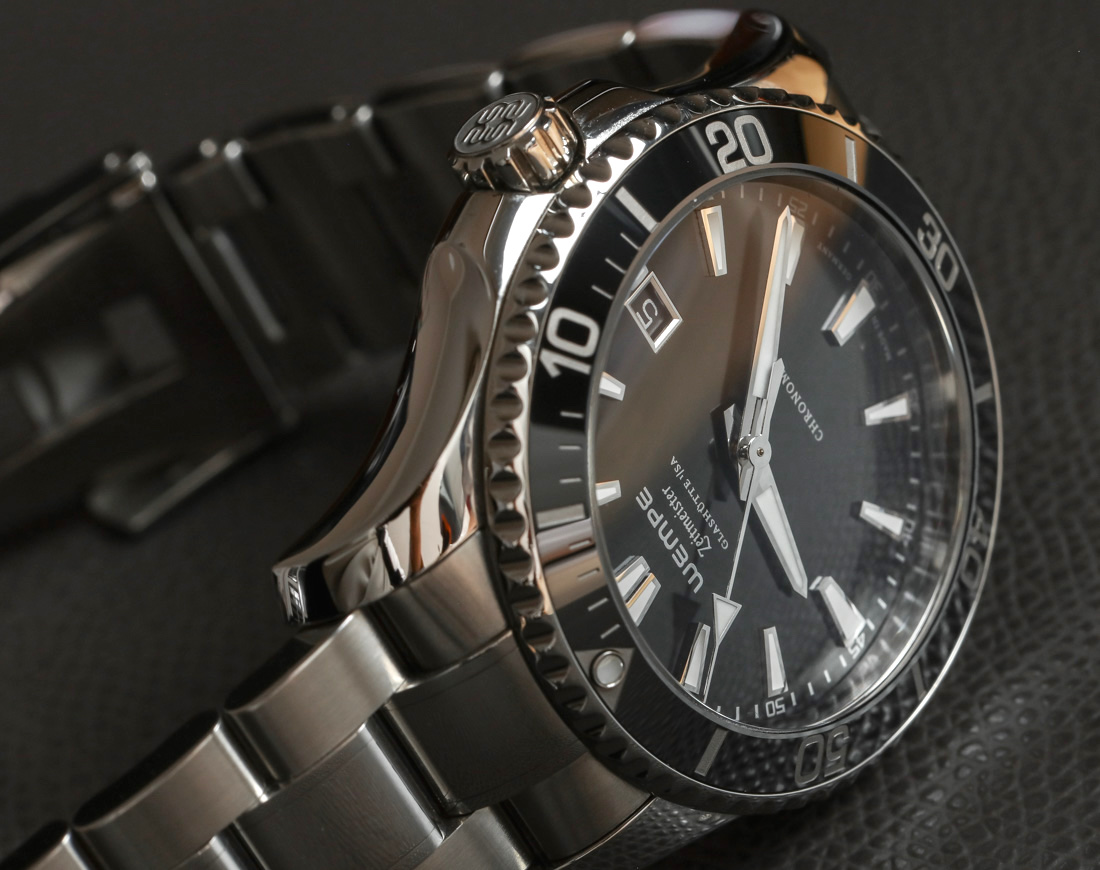 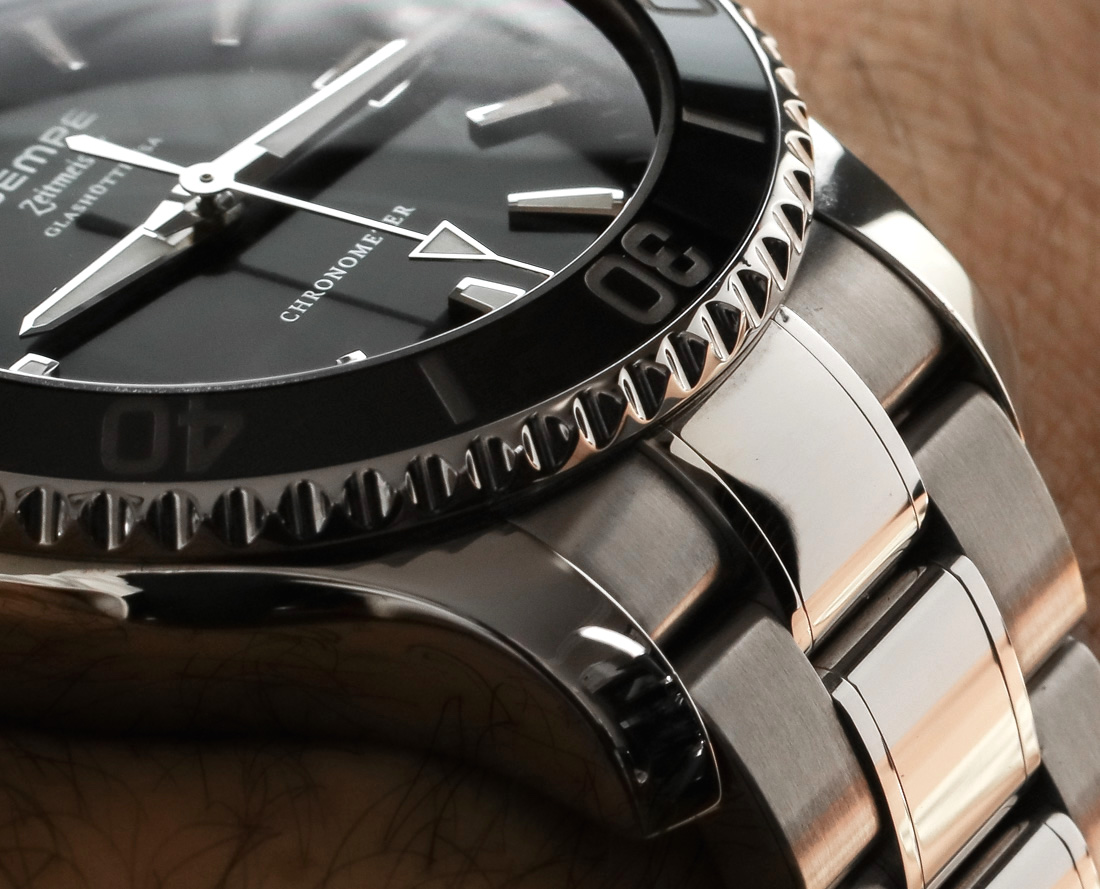 One of the major positives of the Wempe Zeitmeister Sport Diver’s Watch is that it seems to ooze quality from so many different angles. Elements like a slightly domed and nicely AR-coated sapphire crystal and an impressively polished case (not to mention the finely tuned mechanical movement) offer a “luxury feel” to this diver. It also has 300m of water resistance and passes German DIN 8319 standards, a strict German industrial norm, so it’s a very solid diver’s watch. Potential buyers who compare the Zeitmeister Sport Diver’s Watch with competitors will surely appreciate the small details that Wempe took the time to get right. That attention to detail is a testament to Wempe’s history and experience, as they’ve had their name on watches for well over half a century. 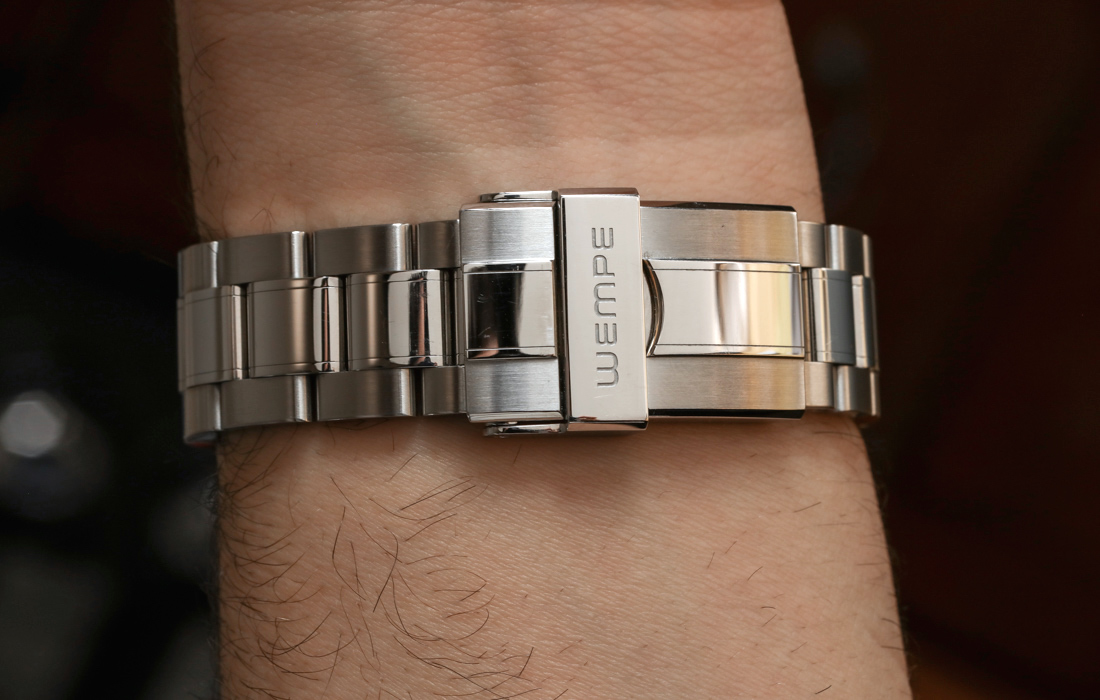 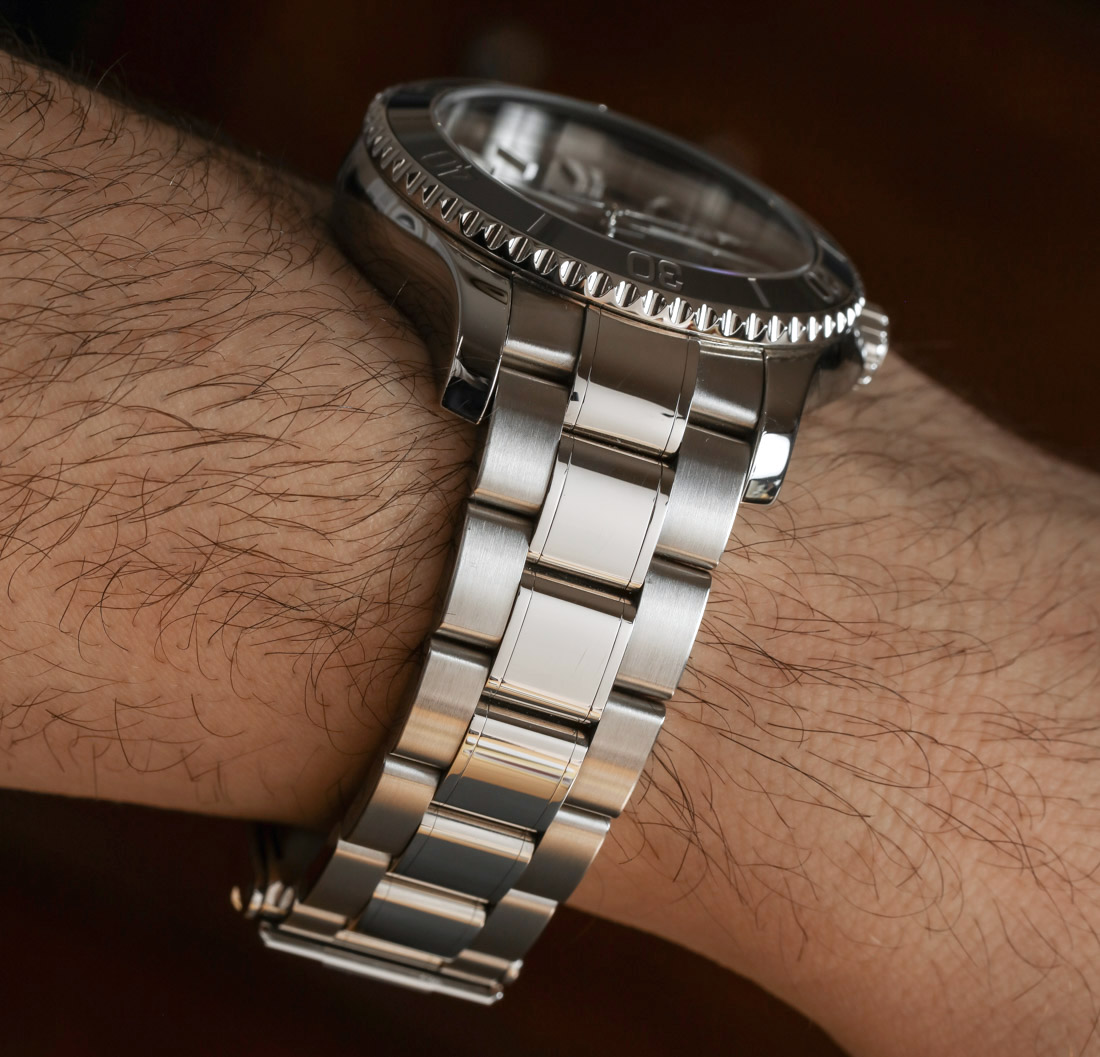 At 42mm wide and slightly thicker than a Rolex Submariner, the Zeitmeister Sport Diver’s Watch wears very boldly with its contrast brushed and polished steel case. Wempe decided to polish the surfaces more heavily than most other modern dive watches, an approach that is very reminiscent of Breitling. The bracelet design, which is a chunky deployant clasp with a diver’s extension, is somewhere between a Rolex Oyster three-link bracelet and an Omega Speedmaster bracelet in style. All that’s missing, in my opinion, is a micro-adjustment system, which is becoming increasingly common in high-end sport watches. 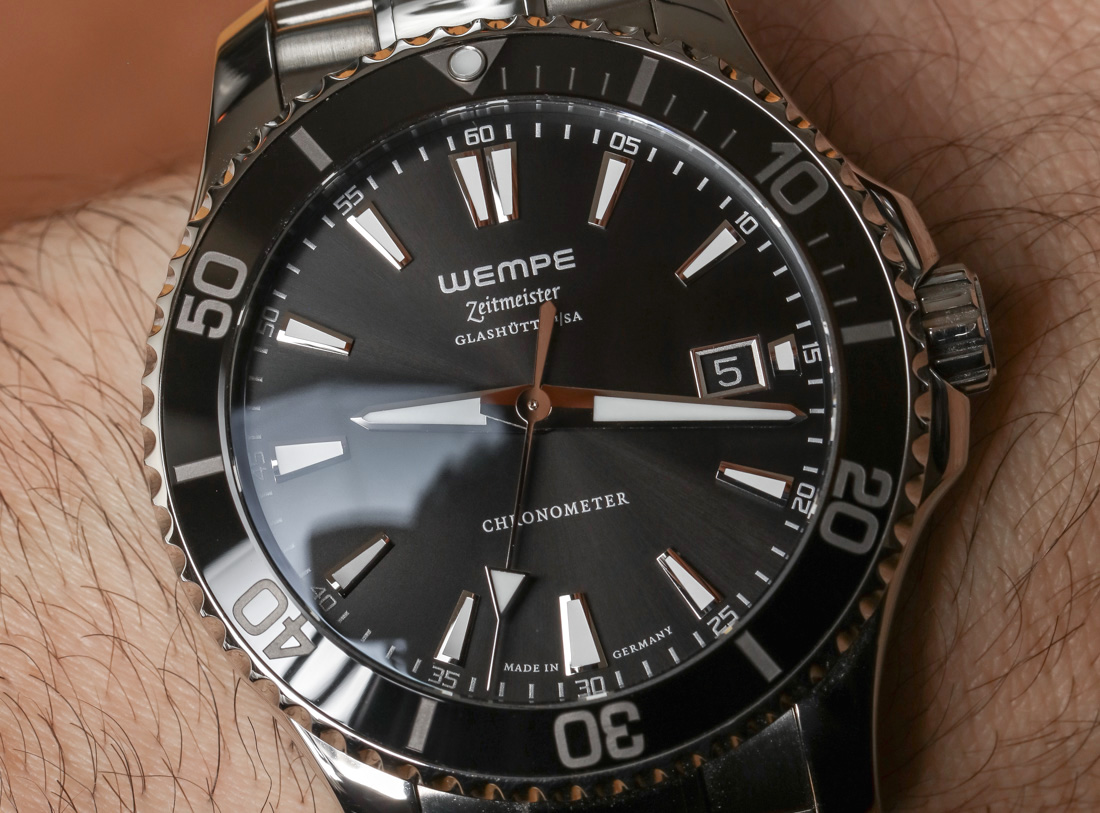 Wempe offers a strong, legible dial, giving the watch a more masculine presence. The large sword-style hands have polished edges and are lume-painted. The hour markers are similarly designed and applied, bestowing the dial a very handsome three-dimensional appearance that offers legibility as well as some shine. However, even though the dial isn’t technically a homage to any one classic dive watch design, it fails to offer a real sense of brand personality, a problem that I would like to see fixed in future versions. 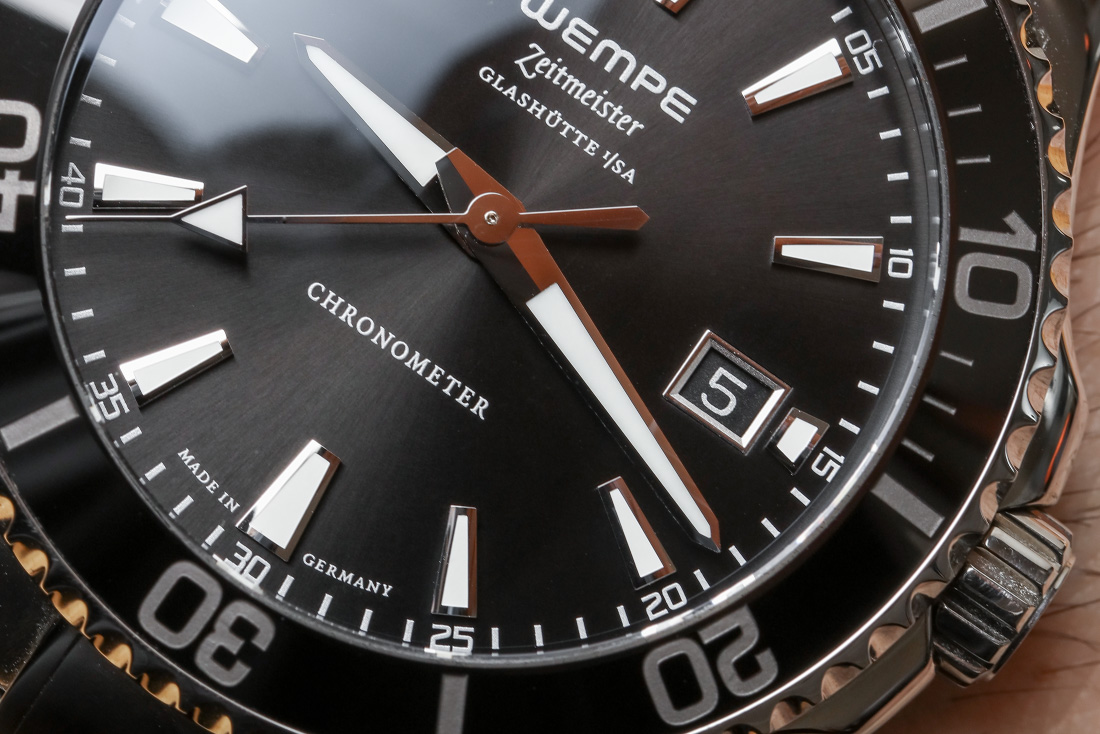 The dial has a glossy black lacquered face, which contrasts really well with the hands and hour markers. Like I said, Wempe really wanted to make sure that its diver’s watch was indeed a useful, functional tool. Wempe also produces a blue-colored variant of the same Zeitmeister Sport Diver’s Watch as well as a chronograph and GMT model. Paired with the case is a black ceramic bezel insert (blue ceramic for the blue model) on a unidirectional rotating bezel, which possesses engraved numerals and a lume pip at 12 o’clock. The dial features the time and an attractive window for the date. I want to mention that though Wempe uses a black-colored date disc for this reference WM65 0005 version of the watch in black, they use a rare blue-colored date disc for the blue version, reference WM65 0006. 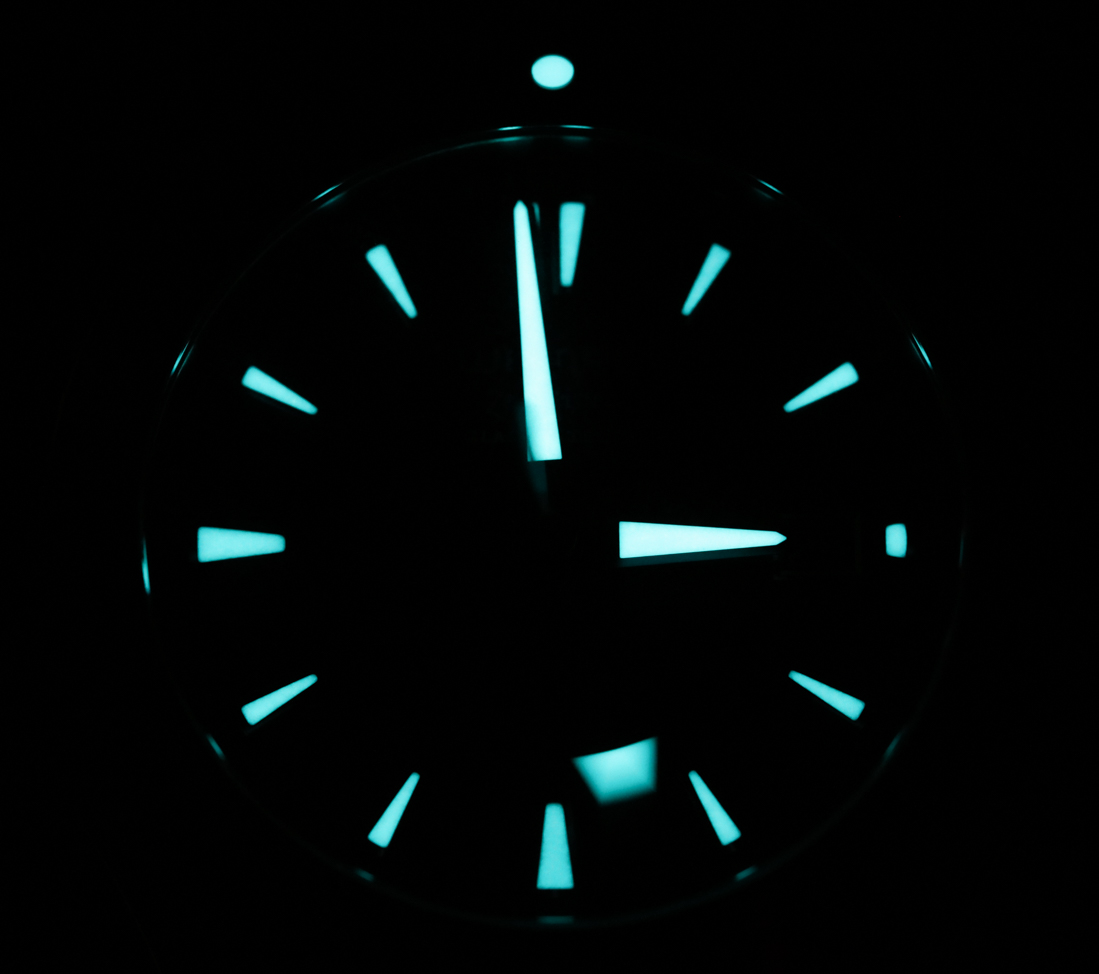 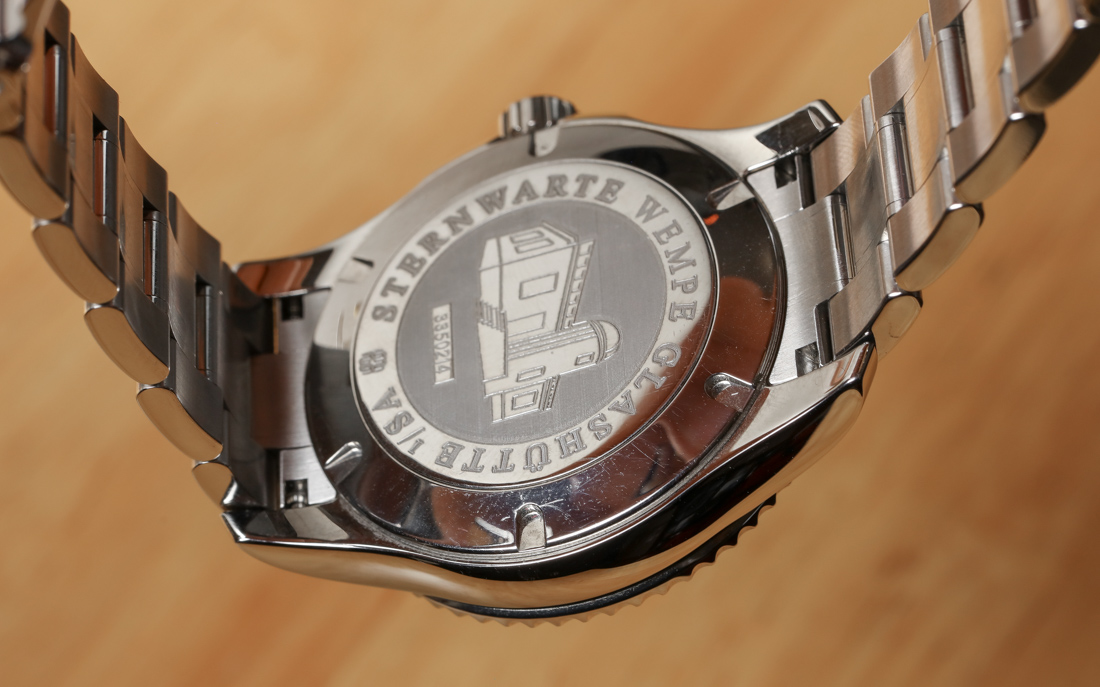 Inside the watch is the German Chronometer-certified Swiss Sellita SW300 automatic mechanical movement. This is essentially the same as the Swiss ETA 2892-A2, not a fairly uncommon movement, but a solid workhorse. The movement operates at 4Hz (28,800 bph) and has about two days of power reserve, so it’s an acceptable movement for a timepiece of this quality and price. The rear of the watch is similar to most of the Wempe timepieces I’ve seen—it has an engraved picture of Wempe’s Sternwarte observatory in Glashutte. Though this makes sense, as it’s where the watches are assembled and tested, the image isn’t particularly exciting in my opinion. What is cool, however, is that each watch has a personalized and unique serial number that is individually engraved on the rear of each case. Another interesting detail is the distinctive “multiple W” Wempe logo engraved into the screw-down crown. 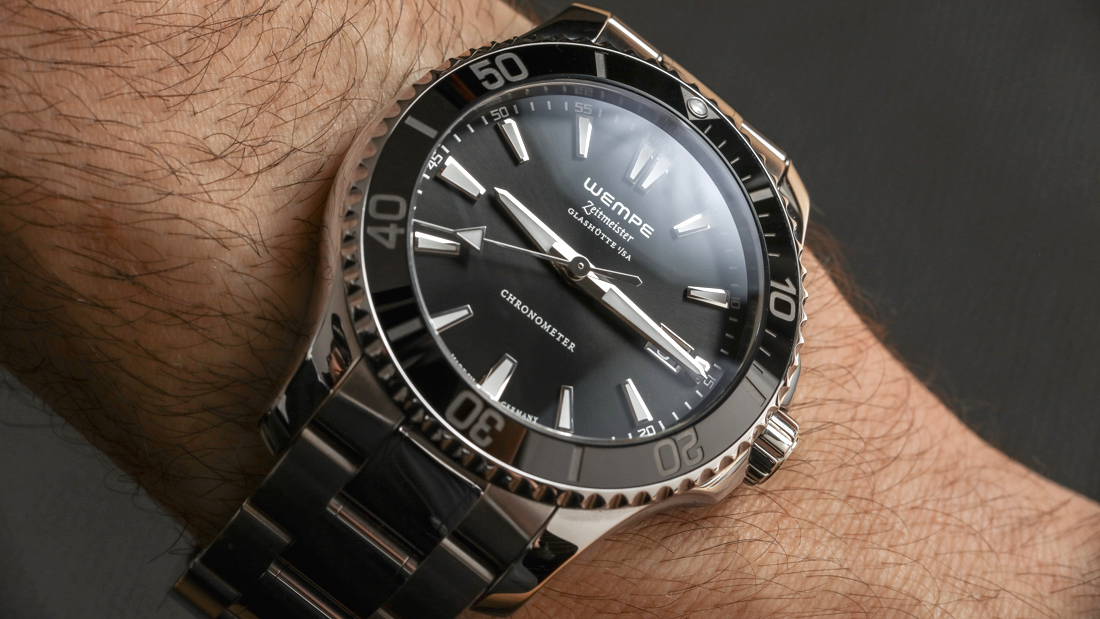 Necessary Data
>Brand: Wempe
>Model: Zeitmeister Sport Diver’s Watch (reference WM 65 0005 as tested)
>Price: $2,860 USD
>Size: 42mm wide
>When reviewer would personally wear it: When wanting to get a very well-made and reliable high-end diver’s watch for under $3,000 after doing a lot of research to find what goes into a solid diver’s watch.
>Friend we’d recommend it to first: German watch lover interested in a clean diver’s watch design with modern appeal and timeless longevity.
>Best characteristic of watch: Excellent assortment of parts, build quality, movement regulation, and presentation. A very nice diver’s watch, albeit one without too much personal character.
>Worst characteristic of watch: Lacks a design that is highly distinctive. Caseback engraving is less than exciting. Bracelet is well-made but would be better with a micro-extension system.