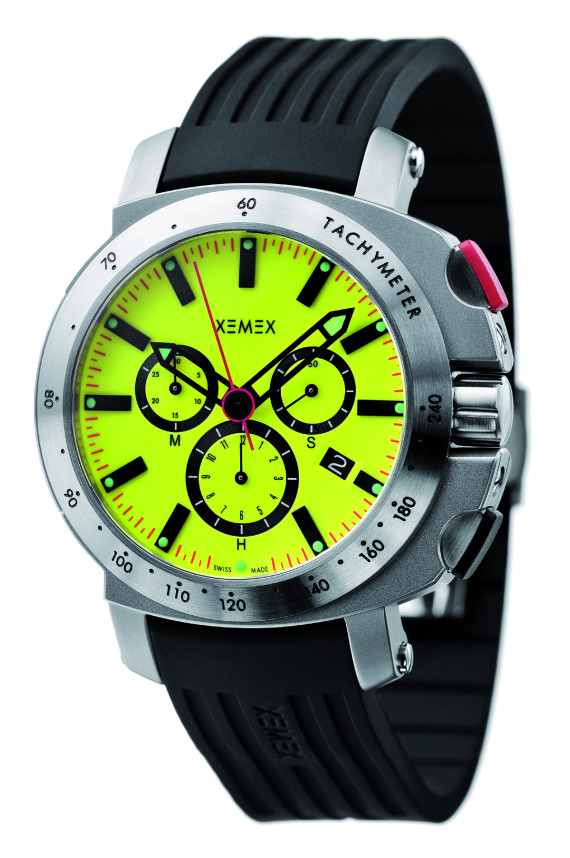 It feels like it has been a while since we have seen something totally new from Xemex. The last few years saw increasingly up-market timepieces from Xemex as the Swiss watch market kept getting stronger. We all know what happened recently and this new Concept One Chronograph watch is going to be quite reasonably priced. It does beg the question if Xemex’s Ruedi Kulling decided somewhere in the design process that an up-market watch would not have as much market appeal these days, and decides to place a quartz movement inside instead of a mechanical movement. Who knows, but it is a good speculation.

The quartz chronograph movement is likely a Ronda, as Xemex has been known to use their movements in the past. The functionality is simple and straight forward, but it is the interesting design direction for Xemex that interests me. The entire watch is focused around the asymmetrical case, with a lot of it leaning toward the pushers. This concept is not new (though it is for Xemex). Asymmetrical cases like this have been showing up since the 1960s. In the 1980s, Seiko was playing with similar designs a lot. This watch features a lot of those ideas with the Xemex twist. Frankly, the design is not a Xemex as it could be. The logo, seconds hand, and hour markers are pretty iconically Xemex, but the rest isn’t. For instance, parts of the case and the main hands of the watch remind me more of Panerai than Xemex. Few companies other than Xemex can pull off this bold of a yellow face, which is also luminescent. The face is also available in white and black, in addition to the yellow. The strap is rubber with a steel deployment clasp.

Xemex is trying hard to push the ‘industrial’ side of design in the Concept One Chronograph, which includes exposed use of screws on the case and lugs, as well as the look of functionality in the tachymeter on the bezel (which isn’t really all that useful). As interesting point of visible functionality is the different colored tips to the chronograph pushers. The case is actually wider than it is tall at 47mm x 43mm. Even at a relatively affordable price of under $1,000, the watch still comes in Xemex’s usually high level of quality with a sapphire crystal. This watch might not be as lovably Xemex as some of their other watches, but it is still appealing in its own right.