Xemex Speedway: Watch I Would Wear If Was A Math Teacher 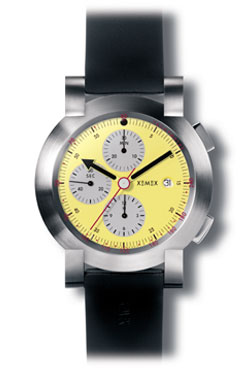 Math teacher is really the first thing that comes to mind when I see the Xemex Speedway. Don’t get me wrong, but the ruler hands and sharp angularity, combined with the clear colors and the compass-like round face all make me think of measuring instruments and time proven formulae. The look is deceptively aesthetic while being minimalistic to the max. The type of watch you wear when you need to know what time it is at Ikea.

This all makes a lot of sense once you know that the designer Ruedi Kulling is an industrial designer who always had a place in his heart for fashionable, yet functional wearable art. The style of European modern minimalism is obviously displayed throughout this watch which can make it difficult to identify its source. So many other makers emphasize this ideal such as Mondaine, Swatch, Ikepod, and Alessi. Regardless, what separates the Xemex is the purity of it’s symmetry and purpose.

The name it self Xemex is symmetrical in its reversible nature.  Although the face does utilize the common orientation for the sub-dials which is not purely symmetrical, the illusion is still inherent. This seems to come from the vast array of time markers and small numbers which make up the face. Larger numerals would detract too much from graceful forms of the watch. This is a common concern among designers because you want to enhance legibility, without sacrificing looks. For this reason, most watches will use generic number indicators, or spare use of numbers. Think about this the next time you see watches with and without number on the face.

I own a Xemex Offroad, which was one of my first swiss watches. It is a quartz, but nonetheless is a beautiful little object of art impeccably made. I happen to own the version which does utilize Arabic numbers. Due to the large and graceful hands, the watch is probably the most legible I own. Meaning you can tell what time it is with the greatest of ease. There are however numberless versions which have more symmetry and thus beauty appeal.

You don’t see a Xemex very often, as they are considered among the avant-garde. I recommend them highly as their quality is far superior to that of similarly designed watches if you are taken by the Math teacher looks. I hate algebra, but I love the geometry present in Xemex’s line of time tools.