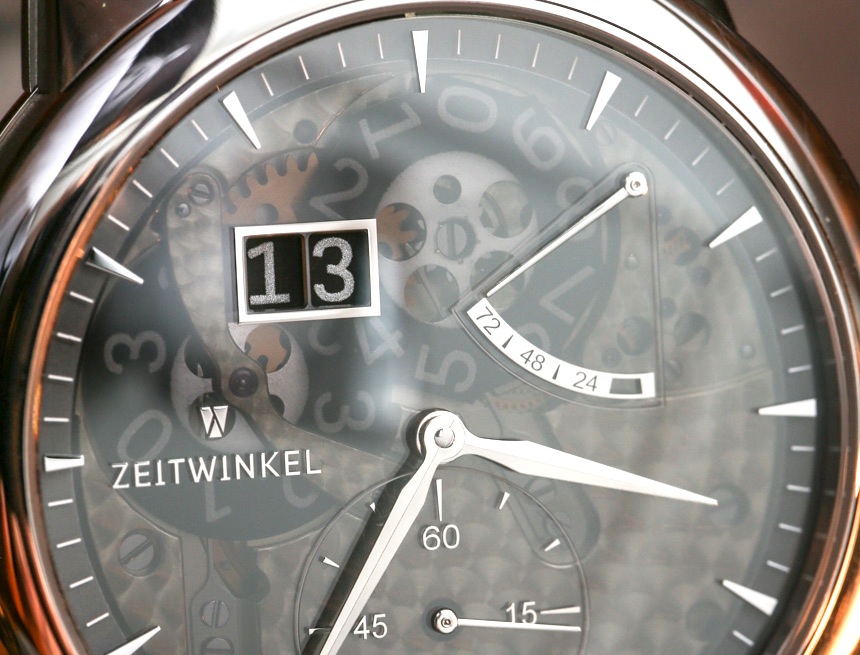 A tried and true tactic for appealing to high-end watch lovers today is for timepiece makers to show a little skin. Don’t be bashful, watches with nice things to show shouldn’t hide their sexiest parts, which is why you see so many skeletonized watches these days. I’ve written quite a bit about the variety of skeletonized watches and how various companies approach this design style in various ways. Let’s look at how Swiss Zeitwinkel does it with the Zeitwinkel 273° Saphir Fumé watch hands-on. Our Patrick Kansa first debuted the Zeitwinkel 273° Saphir Fumé watch here earlier in 2015. After seeing the watch in the flesh, I can attest to its fascinating design, but it isn’t without its flaws, either. The issue with any type of “open” or “skeletonized” dial is that you can greatly impede legibility – this is the most serious risk of engaging in such a design endeavor. Of course, the 273° Saphir Fumé is not a true skeletonized watch because nothing is actually very skeletonized. Neither the movement nor the dial are cut up to reveal a deeper look into the mechanism. Rather, this particular approach to offering a more intimate view of the in-house made movement is done by using a smoked sapphire crystal as the actual dial. In all respects, this is a standard Zeitwinkel 273° timepiece, but with a special dial. The idea, at least, is to offer the best of both worlds when it comes to a view of the movement as well as legibility. Practically, I think Zeitwinkel is almost there, but the polished hands need to be fixed. I am going to one again decree a “death to all polished hands” statement which I hope that watch makers continue to take seriously. Want to utterly ruin an otherwise nice watch? Then just put polished hands over a glossy dial. This recipe will result in a most delicious, illegible timepiece that will not do the underlying design justice. I’ve mentioned this to Zeitwinkel, of course, and am pretty confident there will be other hands put on the Zeitwinkel 273° Saphir Fumé timepiece. My photography of the dial is intended to be as flattering as possible, and in the pictures you can read the hands easily enough – but in person, the legibility of the hour and minute hands leaves a lot to be desired. Like I said, don’t let this put you off, as I believe Zeitwinkel will fix this with some satinized hands or something else with a matte finish. The reason I am so keen on the watch otherwise is that I truly love the concept of what they have done – even if, in execution, a lot of minor details need to be considered for it to work perfectly. To have an otherwise classy and conservative watch with a sort of “discreet” view into the movement is something I can really stand behind. Here, the normally metal dial has been replaced with a very complicated-to-produce smoked sapphire crystal that has not only been carefully cut for the windows and hands, but also treated for that perfect mixture of transparency and opacity.

Zeitwinkel is a Swiss brand but run by Germans, so you see a lot of Teutonic design philosophy going on here as well as things such as use of German Silver for the movement. “Traditional” is probably a good way to describe the design, even though the Zeitwinkel 273° Saphir Fumé has a lot of “modern” design elements such as the indented elements of the case, as well as the dial, of course. The movement is produced in-house at their St. Imier, Switzerland, facility and is the caliber ZW 0103 automatic. The movement is really beautiful and performs at 4Hz (28,800 bph) with a power reserve of 72 hours. The bi-directional winding automatic rotor is also produced in German Silver, which is cool. Outside of some of the watches at A. Lange & Sohne, I can’t think of any automatic movements produced from German Silver. All of the German Silver-based movements from Jaeger-LeCoultre are manually wound, as far as I can recall. The movement has a traditional yet functional feel to it, complete with useful complications such as a big date indicator, subsidiary seconds dial, and power reserve indicator. The layout on the dial is the type of balanced asymmetry I can easily stand behind (though I am normally a fan of purely symmetrical watch dials). I’ve heard good things about Zeitwinkel watch movement performance, so I can’t imagine people being anything but pleased by this caliber in aesthetics and functionality. The Zeitwinkel 273° Saphir Fumé watch itself comes in a steel case and is 42.5mm wide. Sure, Zeitwinkel could have used a precious metal case, but I think steel was a good option. Though, a high-polished titanium case with sandblasted sides would have been cool as well. The watch case is 13.8mm thick and water resistant to 50 meters. Attached to the case is a calf leather or alligator strap that comes in black as well as brown or gray, if you prefer. I understand that a rubber strap is also available which might be a good look for this watch. Assuming Zeitwinkel fixes some of the legibility issues with the hands, I think they have a very solid and original-looking timepiece here that also happens to come at a fair price given the in-house movement as well as the overall design of the movement. I tend to be a fan of otherwise traditional timepieces but with interesting or modern twists (such as a smoked sapphire crystal) so the Zeitwinkel 273° Saphir Fumé does it for me in a variety of ways. Not a limited edition but naturally limited by production effort, the Zeitwinkel 273° Saphir Fumé has a price of 13,500 Swiss francs. zeitwinkel.ch