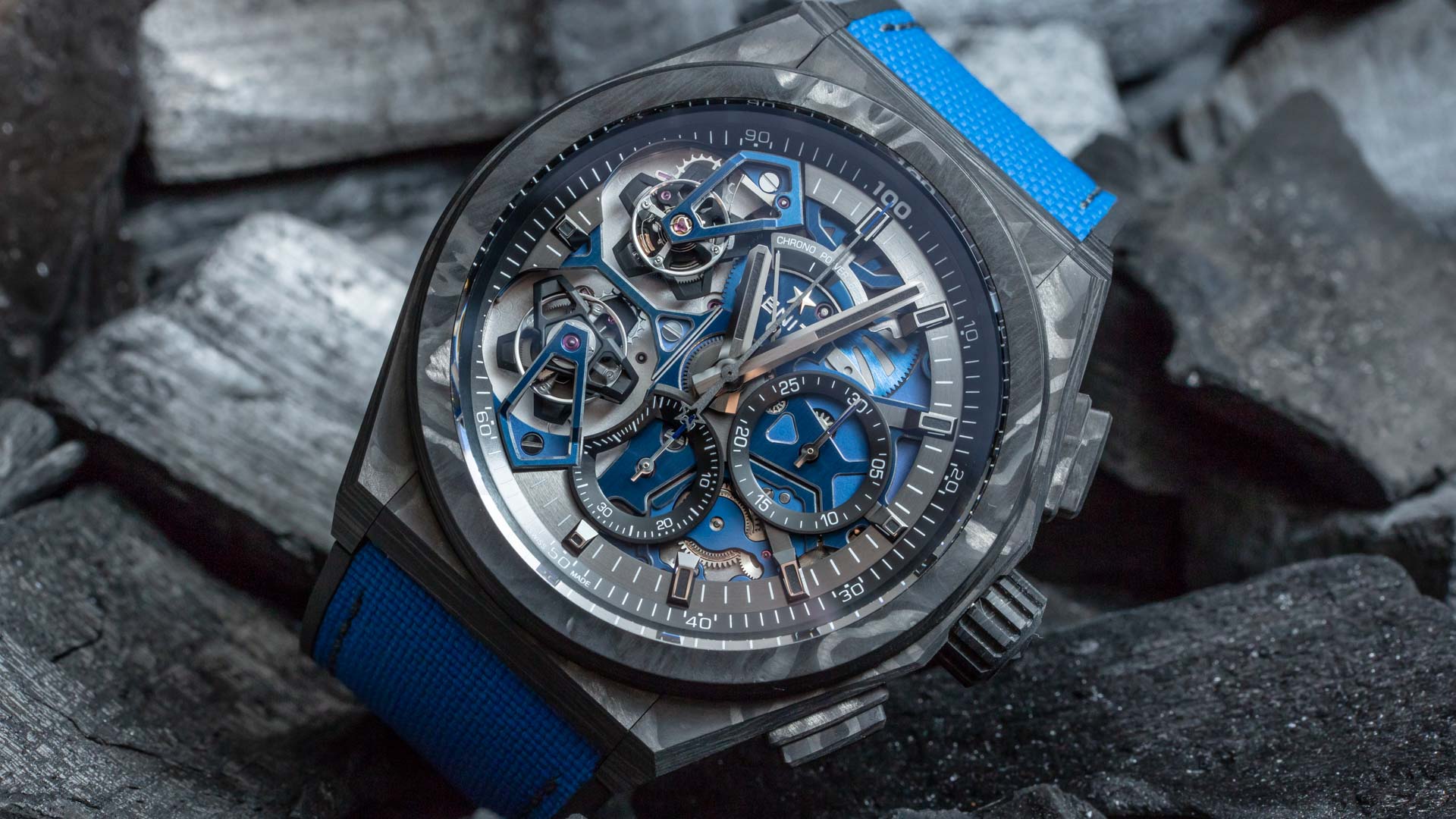 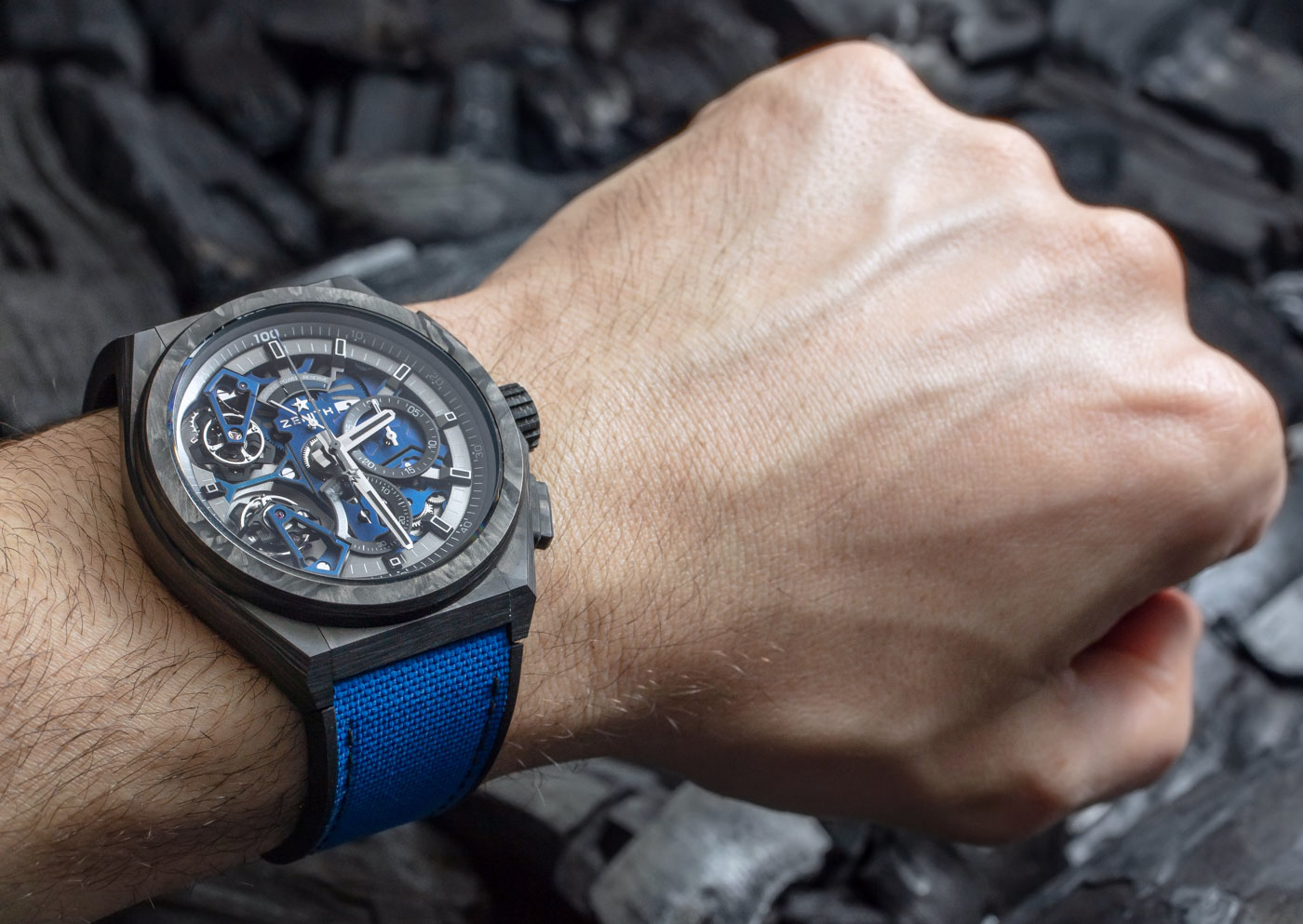 Eight years ago, aBlogtoWatch was there when TAG Heuer debuted one of its several outstanding (from a performance standpoint) chronographs that attempted to very precisely measure intervals of time. That time in 2012, it was the TAG Heuer MikrotourbillonS. Guy Semon at TAG Heuer developed it (and other interesting mechanisms) under the Jean-Christophe Babin regime — and he is still working on exciting innovations there today. TAG Heuer and Zenith are both part of LVMH, and more recently it was decided that such ultra exotic high-end timepieces belonged more at other brands such as Hublot, Bulgari, and Zenith.

Zenith, being the home of the “high-beat” El Primero chronograph (which operates at 5Hz), was the natural place for the further development of “high-beat” chronographs, which this El Primero Double-Tourbillon most certainly is. The reference 10.9000.9020/79.R918 Zenith Defy El Primero Double-Tourbillon contains the Zenith caliber 9020 automatic movement, which builds upon the movement in the MikrotourbillonS. In addition to a new visual architecture, the two escapements now operate at 50 and 5Hz, as opposed to 50 and 4Hz  from before. More so, each of the escapements is a tourbillon, which is where the Double-Tourbillon name comes from. 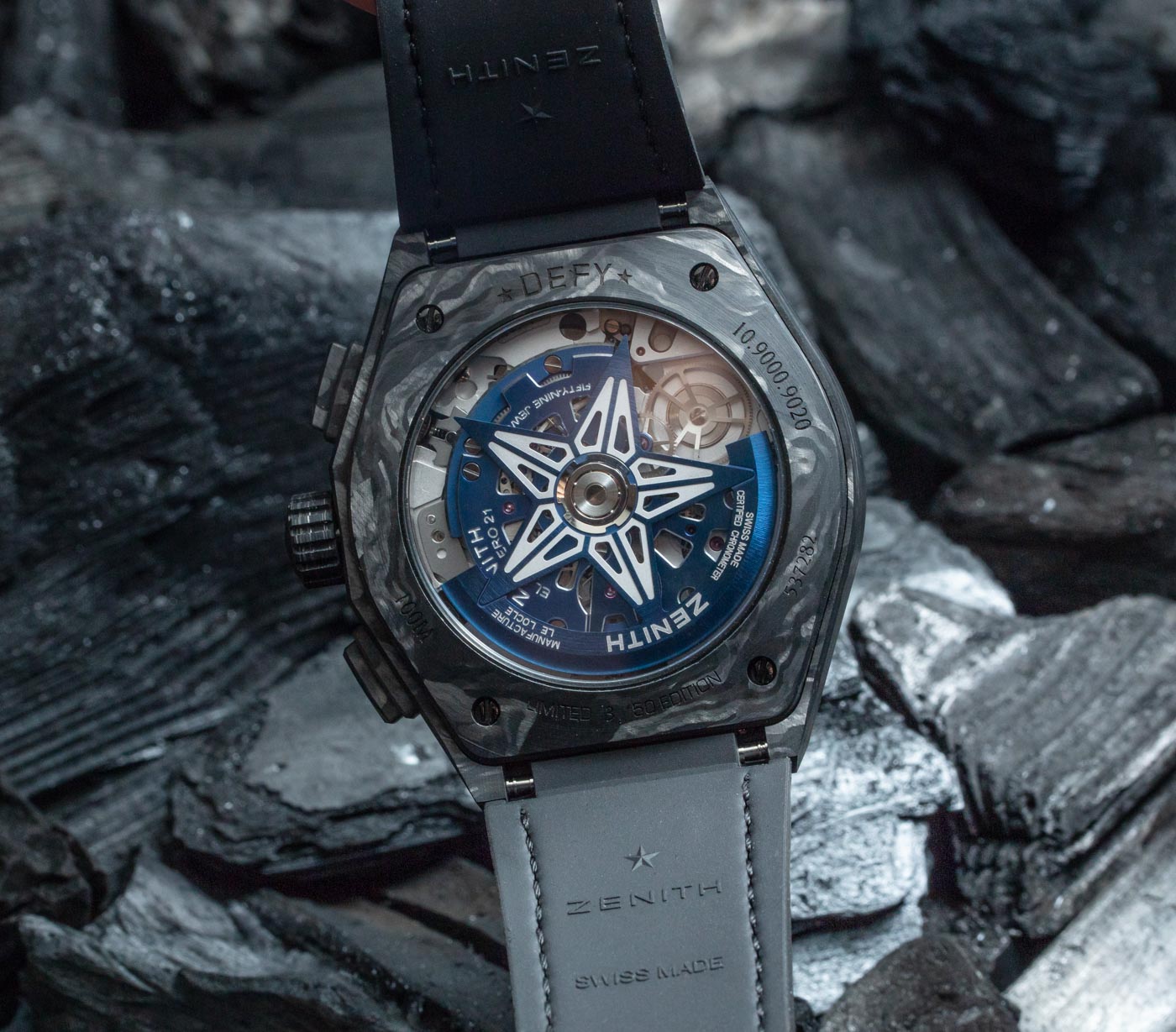 If this is all confusing, then you aren’t alone. Understanding the layers of special features and iterative improvements in this watch is like mastering a tongue-twister. Suffice it to say that the 9020 movement separates the system for telling the time and the 30-minute chronograph in two — each with its own regulation systems (though I believe they both feed off of the same mainspring barrel with a total power reserve of 50 hours). The system to indicate the time operates at 5Hz (36,000 bph making it an El Primero), and the chronograph’s regulation system operates at 50Hz (360,000 bph). Again, both of the regulation systems are also tourbillons (where the entire assembly rotates on its own axis when in operation).

50Hz is fast enough for Zenith (and TAG Heuer before it) to claim chronograph precision of 1/100th of a second. In a world of digital timekeeping devices, that isn’t particularly marvelous — but it is if you exist within the context of mechanical timekeeping. The 9020 automatic movement itself is attractively designed in the new “Defy-style” which is the current collection this model is within. The blue tones of the movement bridges complement the black tones of the dial and case for this “bruiser” of a wristwatch. 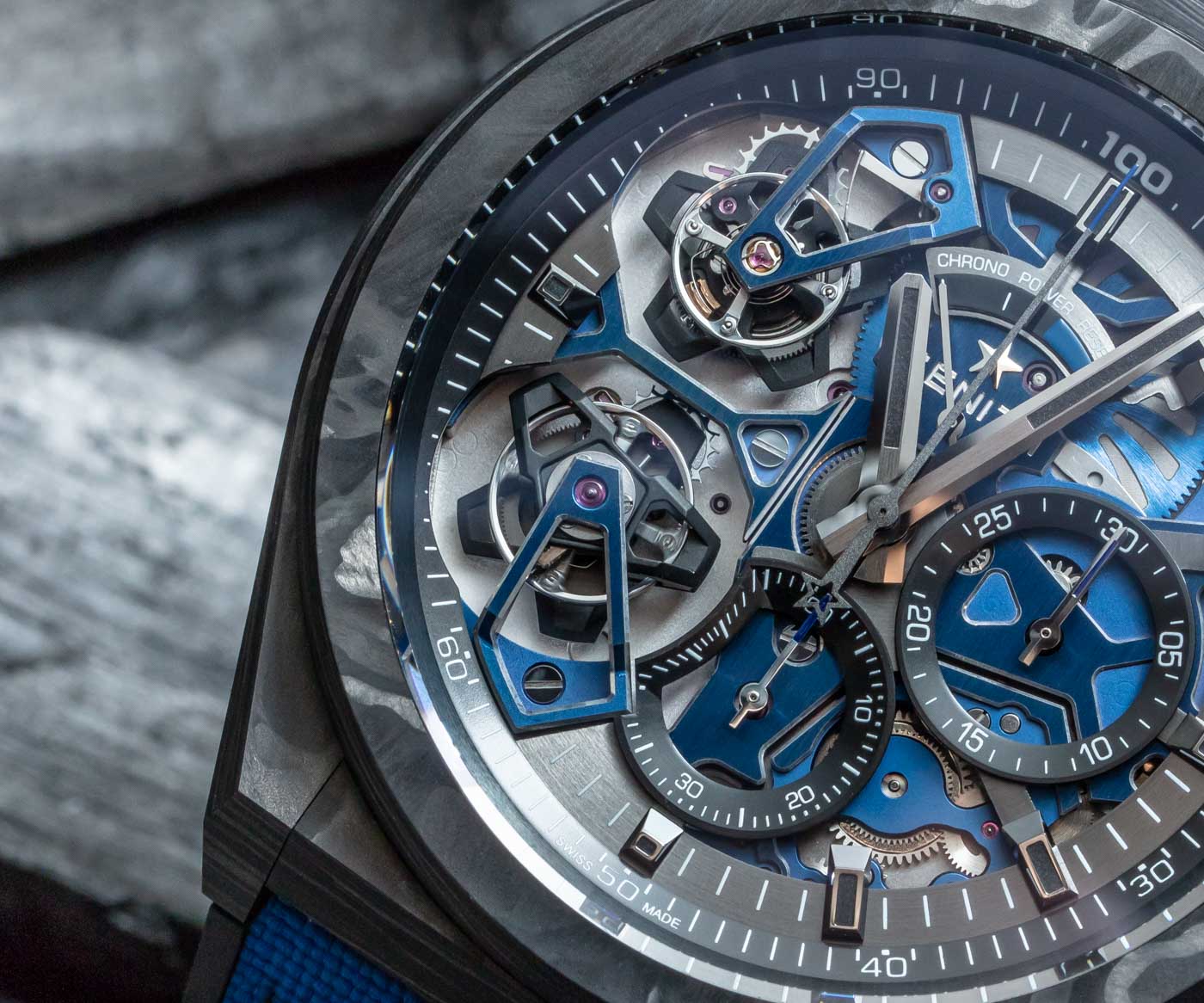 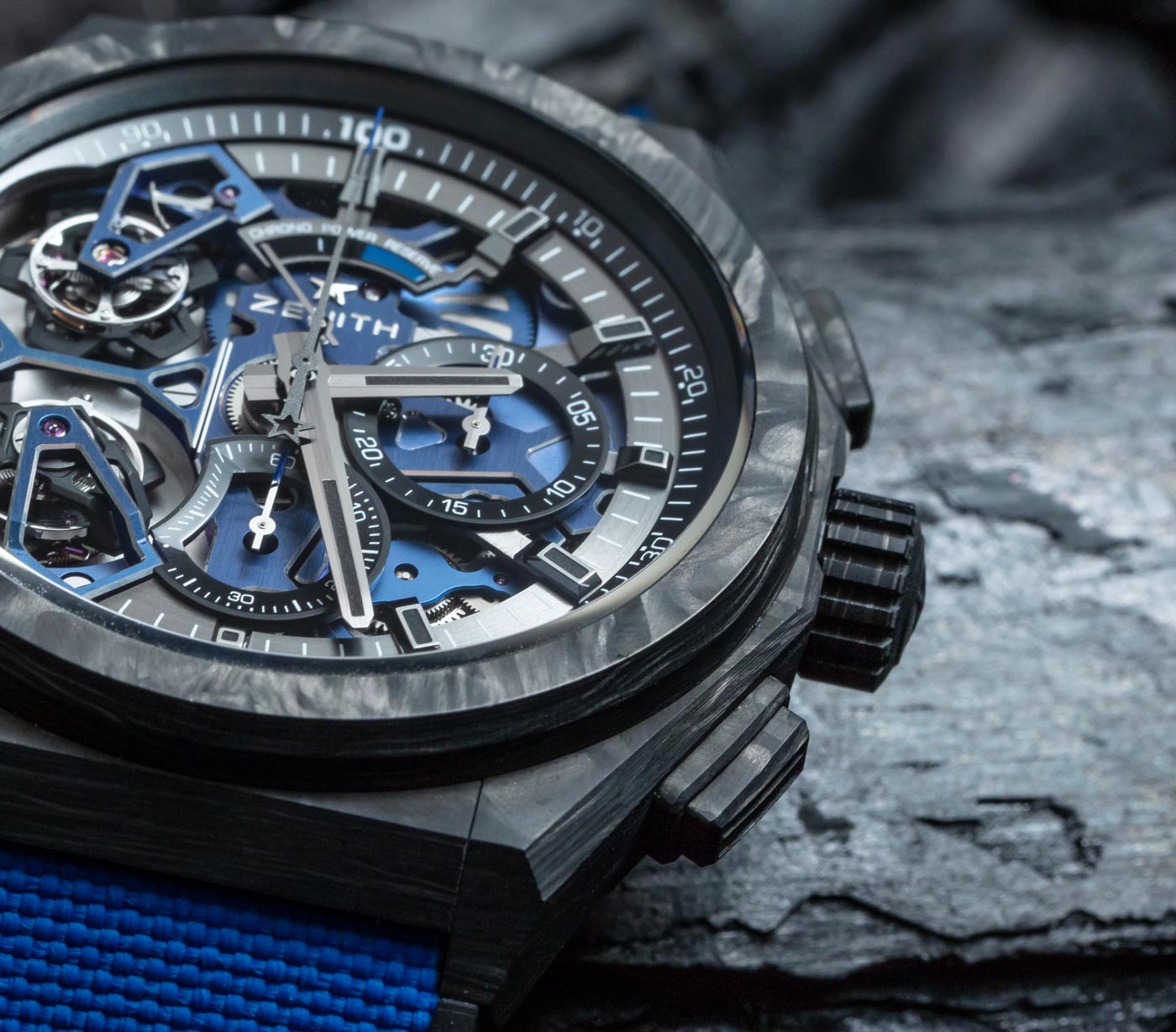 The Defy collection is more or less Zenith’s answer to the Big Bang but with a little Classic Fusion added. It is modern and masculine, but more subtle than a Hublot. This particular Zenith Defy El Primero Double-Tourbillon is 46mm wide and in a case produced from carbon — a lightweight and very trendy material in the realm of ultra-luxury timepieces. The case is water resistant to 100 meters with sapphire crystals over the front and rear of the case. Attached to the strap is a comfortable rubber strap with a blue “cordura fabric effect” rubber lining on the exterior. The black deployant clasp is produced from titanium. 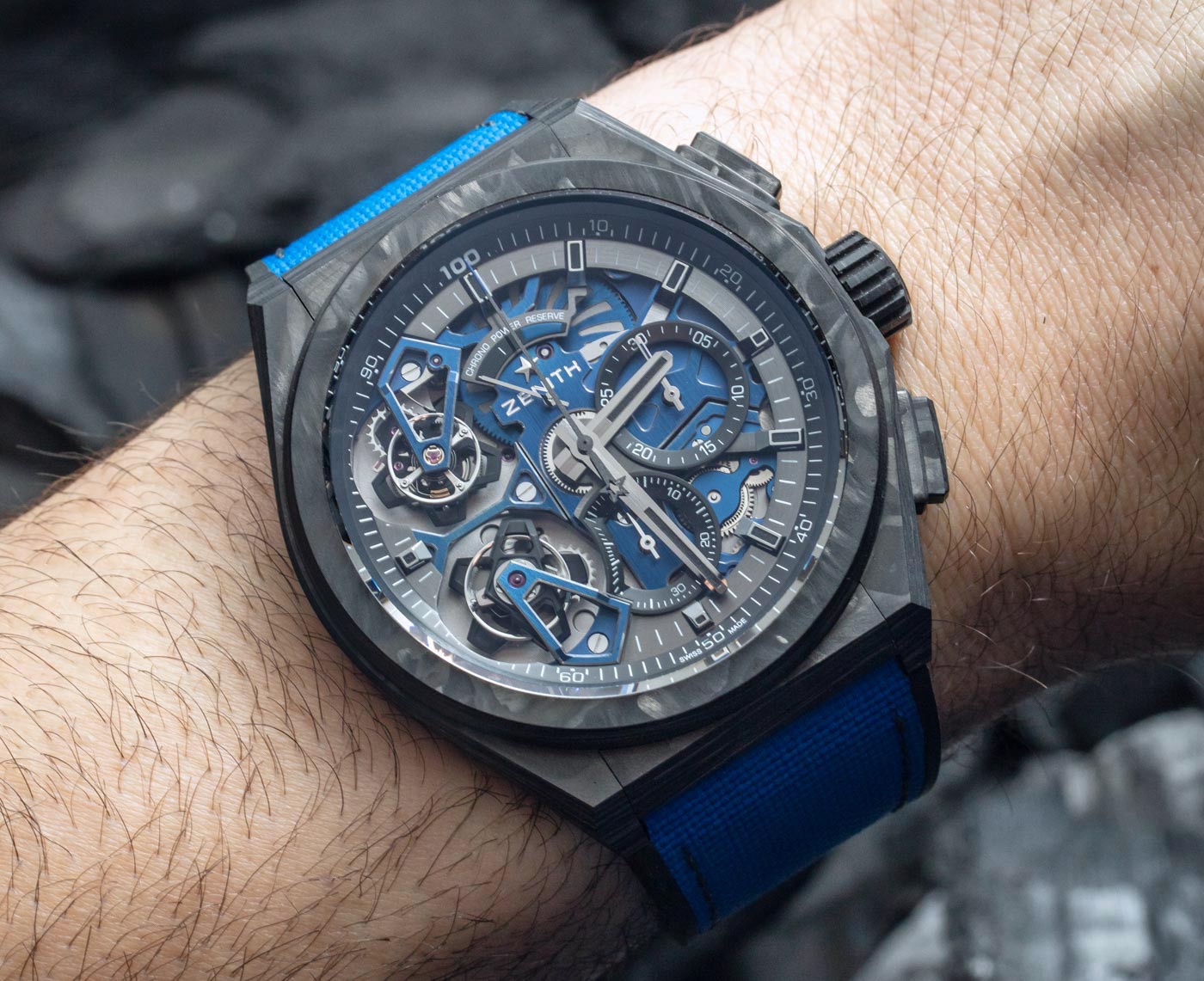 I recently wrote about a similar watch from Zenith’s sister brand, Hublot, the Hublot Spirit Of Big Bang Carbon Troubillon, that is within 10% of the price of this Zenith Defy El Primero Double-Tourbillon. Both of these watches are modern ultra-luxury timepieces, and both make use of dark blue and black tones, as well as use carbon cases. Both watches also feature tourbillons. The Hublot has a slightly more interesting blue and black carbon case material, but has a movement with just a single tourbillon and no chronograph. Zenith boasts the high beat chronograph, two tourbillons, and a movement you can play with a lot more often (ideally it won’t break after repeated use) — and it’s just a bit more in terms of retail price. Really, no one watch is the winner, but it shows that, at LVMH, the brands are free to not only share ideas (and movements) with one another, but they also compete with each other if it helps answer interesting questions about the market. This is a far cry from Richemont and, to a slightly lesser degree, Swatch Group, both of which are known to be like General Motors in the 1980s and 1990s — ardently worried about their brands producing products that might compete with each other. I think the more laissez faire approach by LVMH is the wiser strategy.