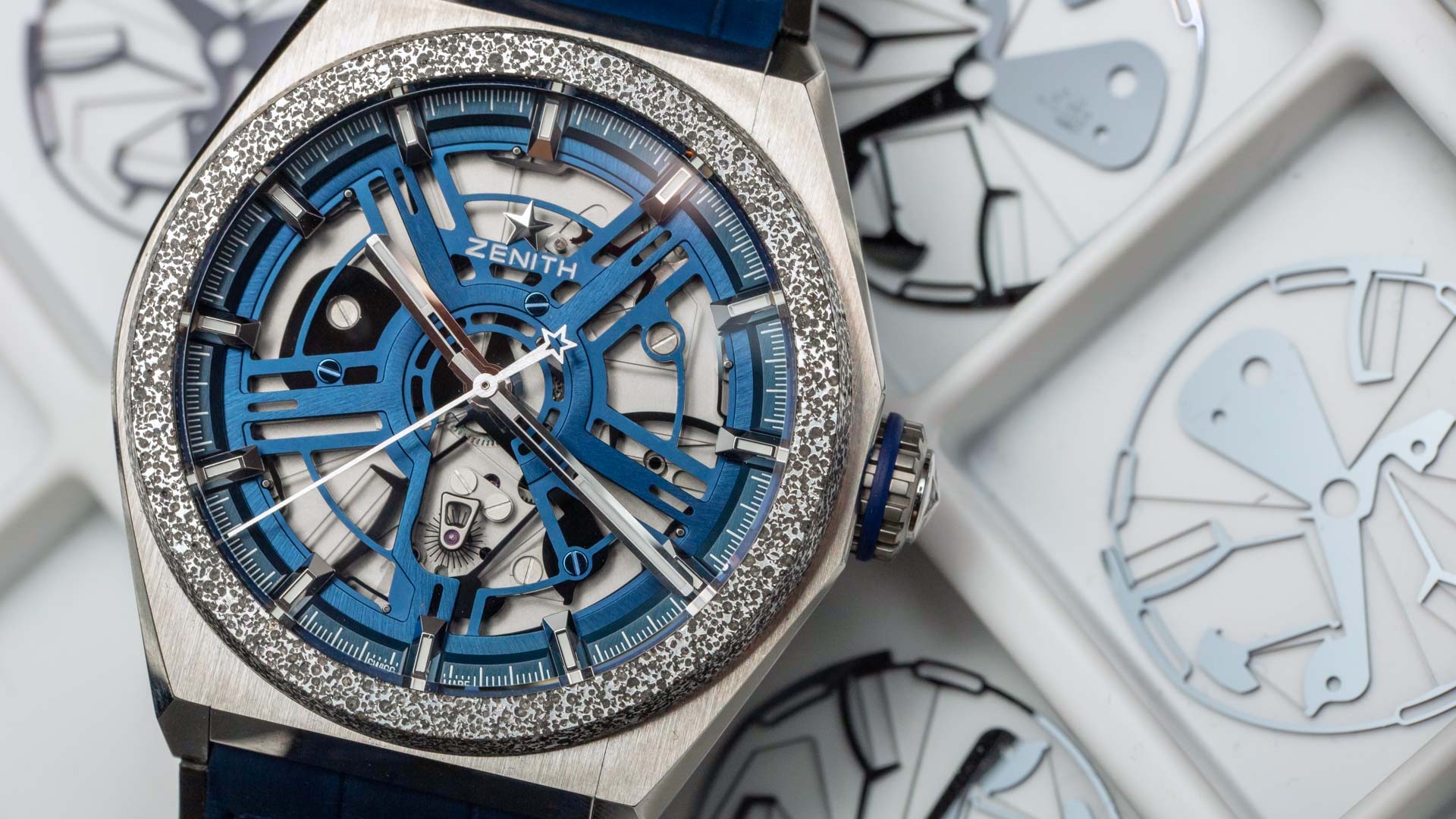 It took Swiss Zenith watches about two years to refine and industrialize the concept behind the massively interesting Zenith Defy Lab watch that was released as a limited edition of 10 pieces in 2017 (aBlogtoWatch hands-on debut here). 2019 watch-lovers excited about getting their hands on a very high-frequency movement that also happens to look cool in operation can look forward to the Zenith Defy Inventor. It features in the in-house-made Zenith Calibre 9100 movement, which operates at 18Hz. This watch is available as a debut model this year with blue color accents. 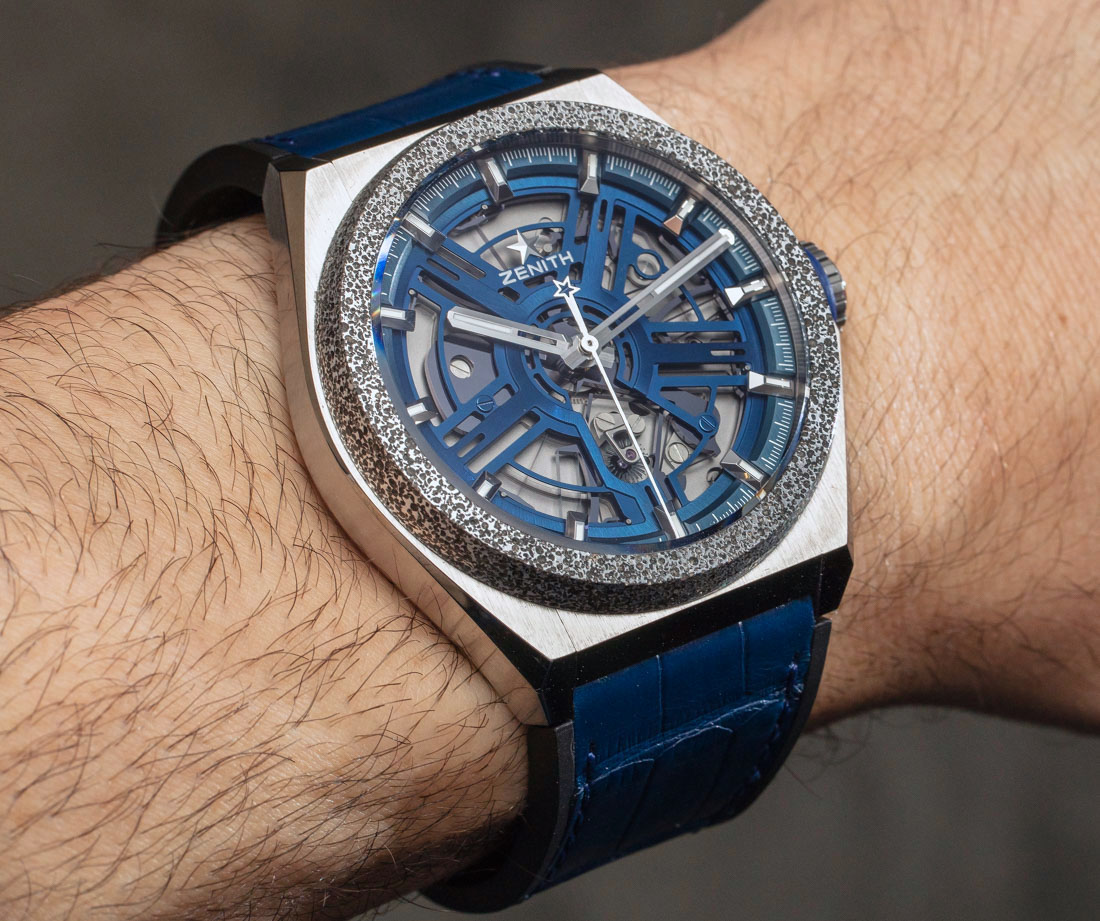 The Zenith Defy Inventor is most of what the Defy Lab watch was, but better in some ways. Aside from the increased collectability of the Defy Lab (given its more exclusive nature), the only area in which it has an edge (depends on your tastes) over the Defy Inventor is the fact that Zenith used Aeronith for the bezel and case, whereas the 2019 Defy Inventor uses titanium for the case and Aeronith for the bezel. If you recall from our discussion about the original Defy Lab, Aeronith is an exotic aluminum alloy that is very hard but also very light. It also happens to look like micro-Swiss cheese, given its perforated surface. The original Defy Lab watch has a sort of sealant over the case surface in order to make it smooth to the touch. Aeronith as the bezel material doesn’t really add anything, technically, to either of these Defy watches from an overall “wristwatch performance” perspective. They are, however, a distinctive look visually (for those who like an organic look to materials and surface) and in the ultra-competitive luxury watch space, it helps Zenith a bit by saying that they have a material others aren’t using (yet). 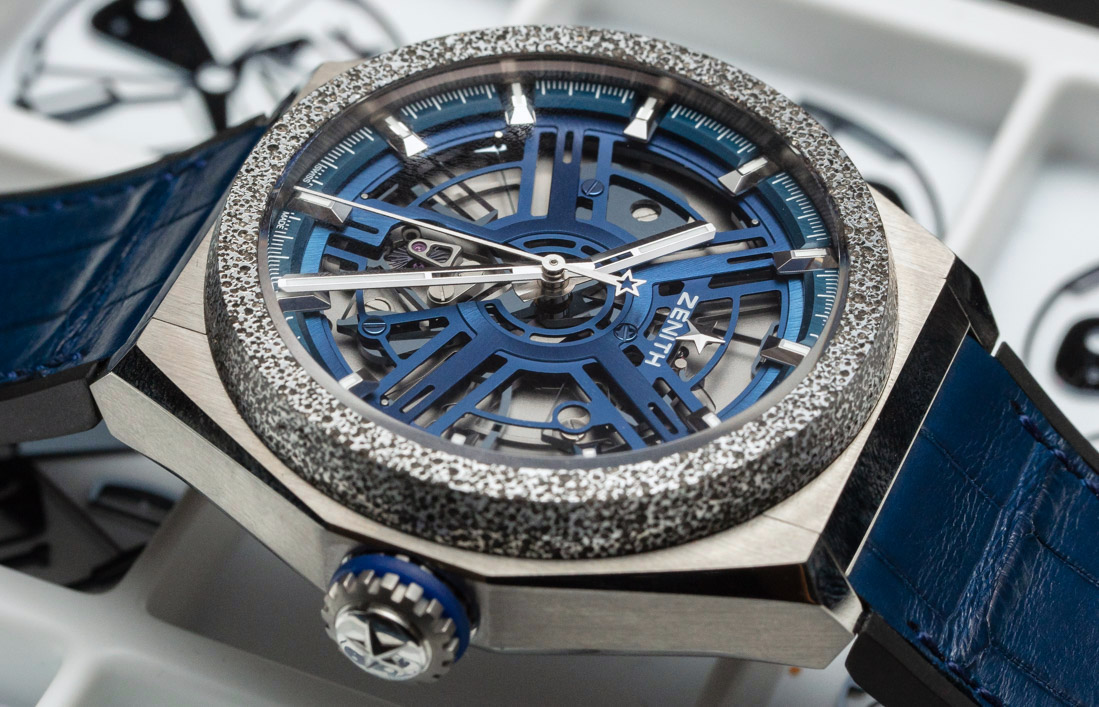 At 44mm-wide and 14.5mm-thick (water resistant to 100 meters), the mostly titanium case of the Zenith Defy Inventor is akin to other Defy collection models in terms of how it wears and looks, save for the radically different movement and dial design (but one that Zenith itself mimicked for some other less expensive models in its collection that don’t have the exotic 9100 movement). The fold-over deployant strap is rubber with a blue alligator liner on the outside — which is a good blend of wearing comfort and style. This is where you see Zenith borrowing heavily from sister brand Hublot, a good thing if you are seeking a modern (and comfortable) watch-wearing experience. 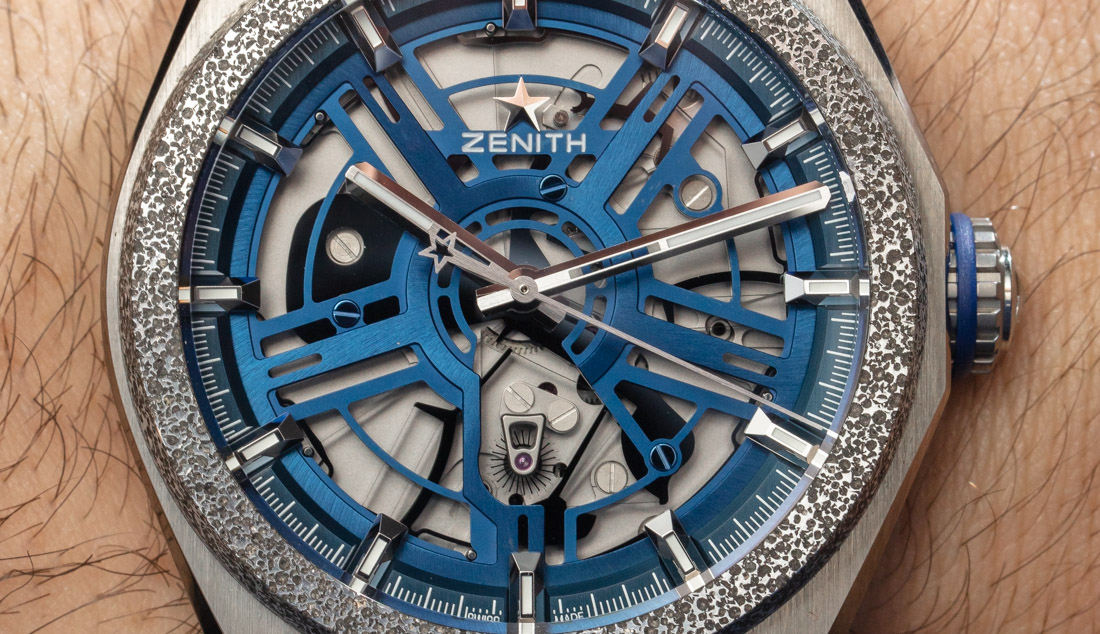 One reason to get excited about the Zenith Defy Inventor is the “vibrating” animation on the dial each time you look at it and, of course, a movement that operates at more than four times faster the rate of your standard 4Hz mechanical movement. Let’s talk about each of these elements separately because they involve different watch-buying propositions. Superficial or not, people like watches that look “cool.” Tourbillons got popular not because they made watches more accurate (not in the least), but rather that they offered a neat spinning animation on a dial. Other complications that offer movement (animation) on the dial of a watch tend to be valued by collectors. Why? Well, because they are fun for the wearer to look at and also serve to capture the attention of others. (Most people wearing luxury watches are seeking attention.) 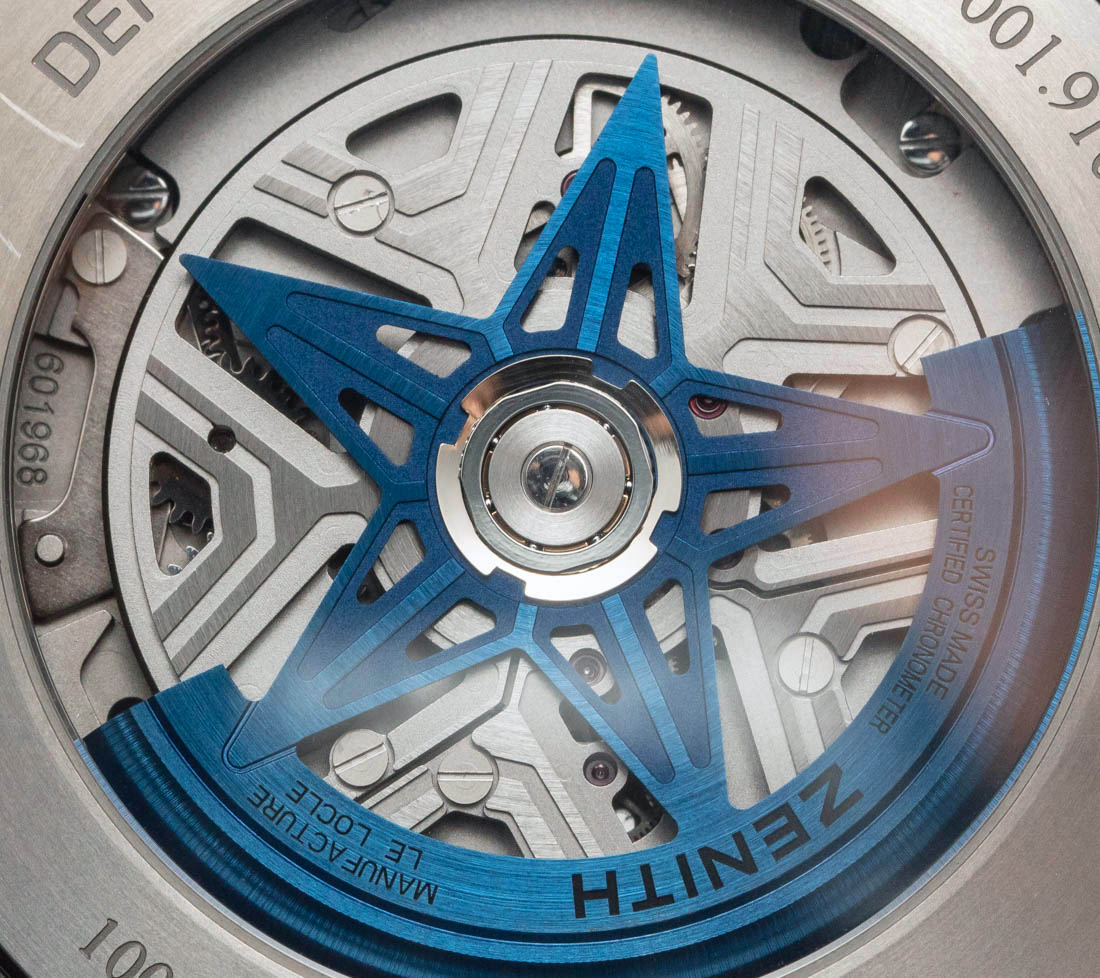 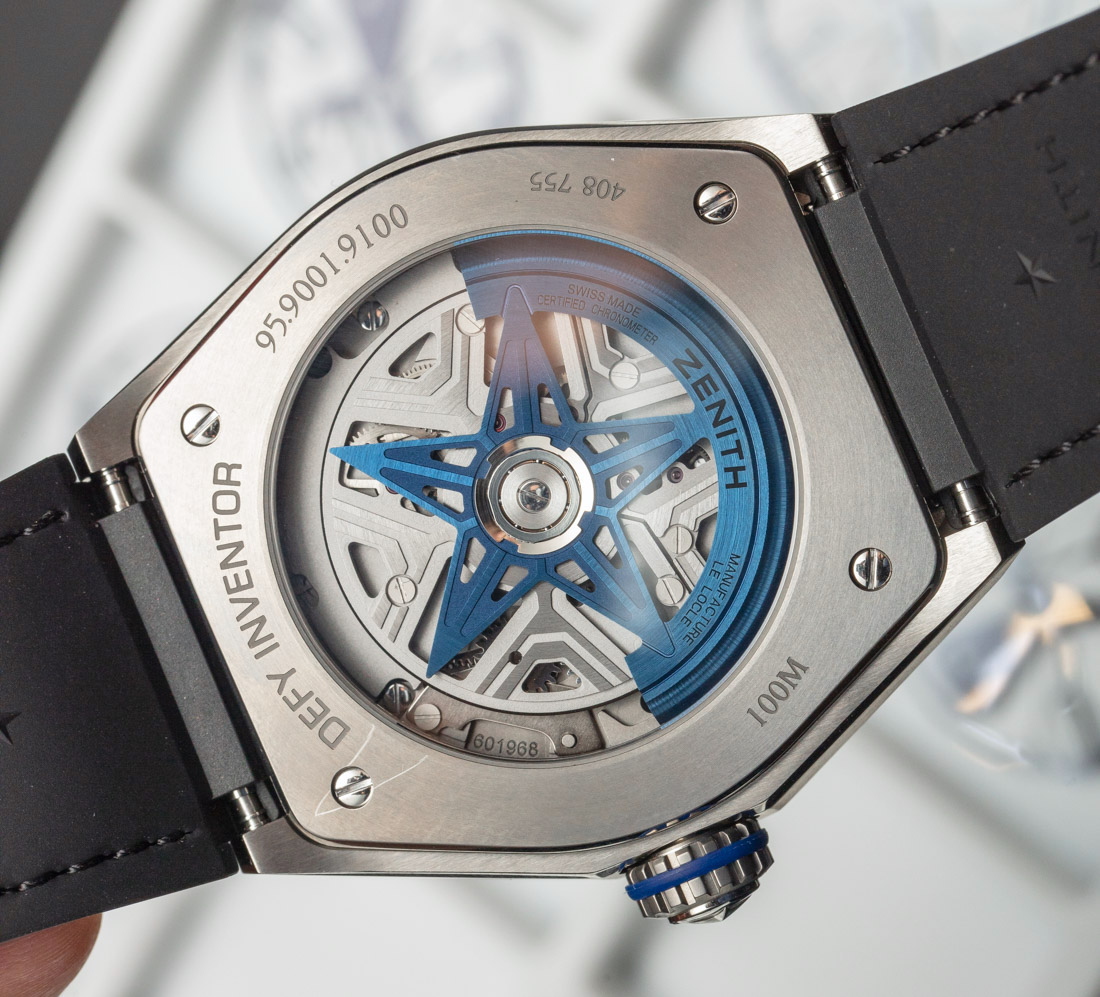 In addition to an interesting animation on the dial, the Defy Inventor also offers performance that other watches don’t have. The Calibre 9100 automatic movement operates at 18Hz with 50 hours of power reserve (and is produced from a relatively lean 148 parts). That is actually 3Hz more than the 15Hz frequency of the Zenith caliber Z 342 movement that was in the 2017 Defy Lab watch. 18Hz translates into a rate of 129,600 bph, which is clearly more than the 28,800 bph frequency of a 4Hz movement. Why is all this speed needed? The faster a regulation organ in a watch operates, the more times it can “beat” each minute. The more beats it has, the fewer effect errors in any given beat will effect the overall accuracy of the movement. Note that Zenith makes zero claims about the Calibre 9100’s real-world timing result performance. This is very common in the watch industry, and we regularly see new technologies designed to increase accuracy in a watch movement without the company behind those movements making any actual claims about real-world performance. Quite rarely is a new movement designd to be accurate that is accompanied by the promise of actual performance increases. 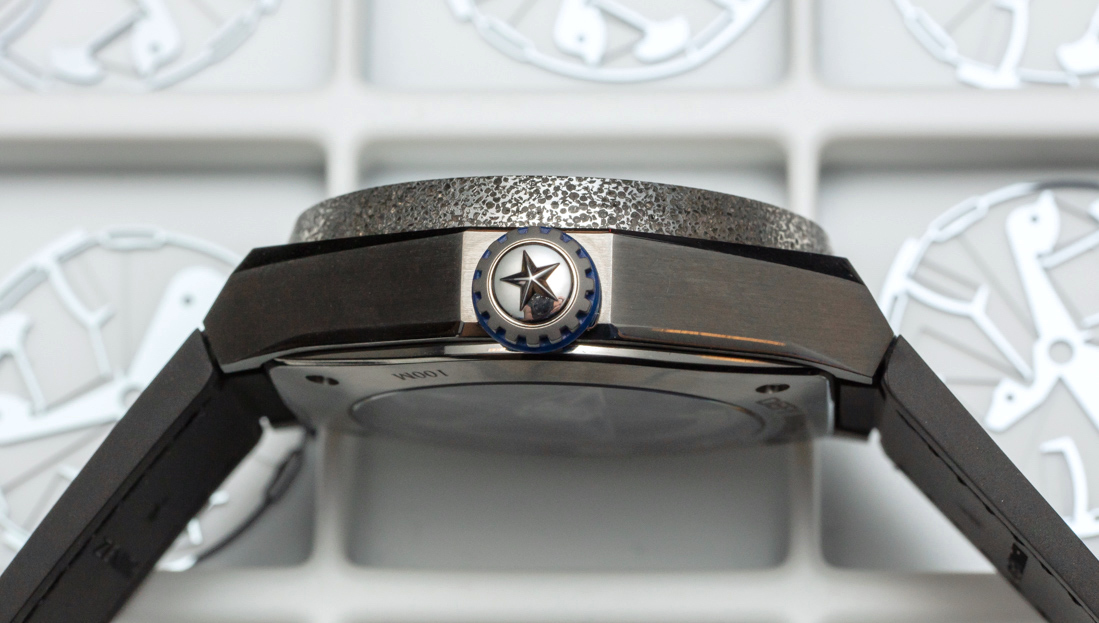 One reason for this is that each particular watch’s accuracy can vary, even if all have the same movement inside. This is because of how movements are regulated, as well as due to minor differences in parts. The Calibre 9100 uses a large “monolithic” silicon structure as the main feature of the regulation organ. This is known as the Zenith Oscillator and is entirely proprietary, having been developed by LVMH’s talented Guy Semon. Zenith made changes to the system between the Defy Lab and the Defy Inventor, but the idea remains the same and, according to the brand, the Zenith Oscillator works well in real-world scenarios, taking into consideration things like vibration, shock, and environmental changes such as temperature fluctuations. 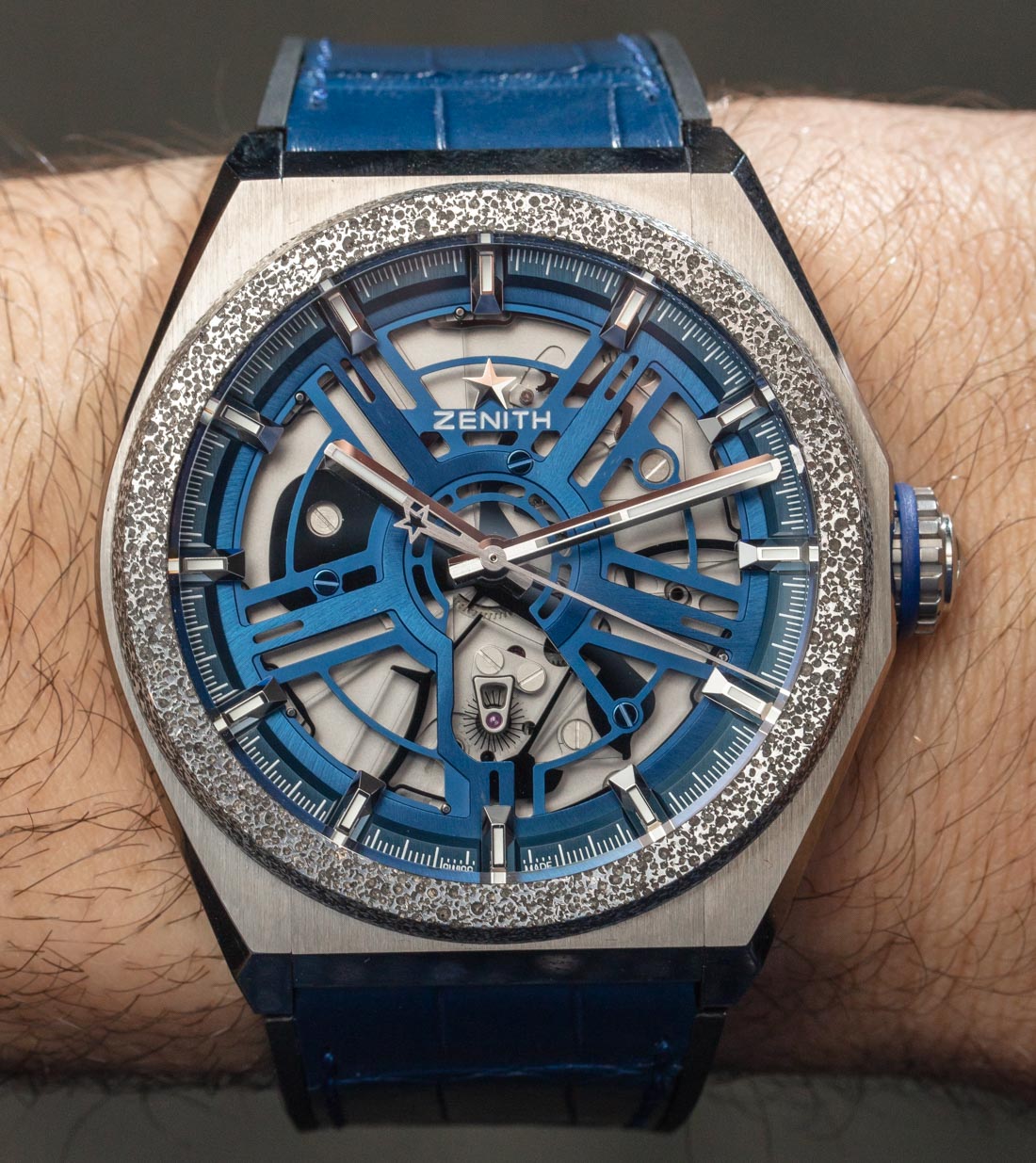 For now, the Zenith 9100 automatic movement only features the time — but that’s OK. It pushes the 5Hz “High Beat” El Primero movement family legacy into the future with an interesting prelude of what might be to come for the brand. Depending on how the technology and culture of Zenith goes, I have a feeling that the next few years of the brand’s direction will really be about pushing the boundaries of what a high-frequency movement can look like, operate like, and perform like — ideally with the addition of even more interesting complications. For 2019, Zenith has already released a high-frequency tourbillon chronograph that operates at 50Hz. Those who have followed Guy Semon’s work for TAG Heuer and Zenith over the last several years should be well aware of his lab’s developments and how they have been incorporated into various high-end timepieces. 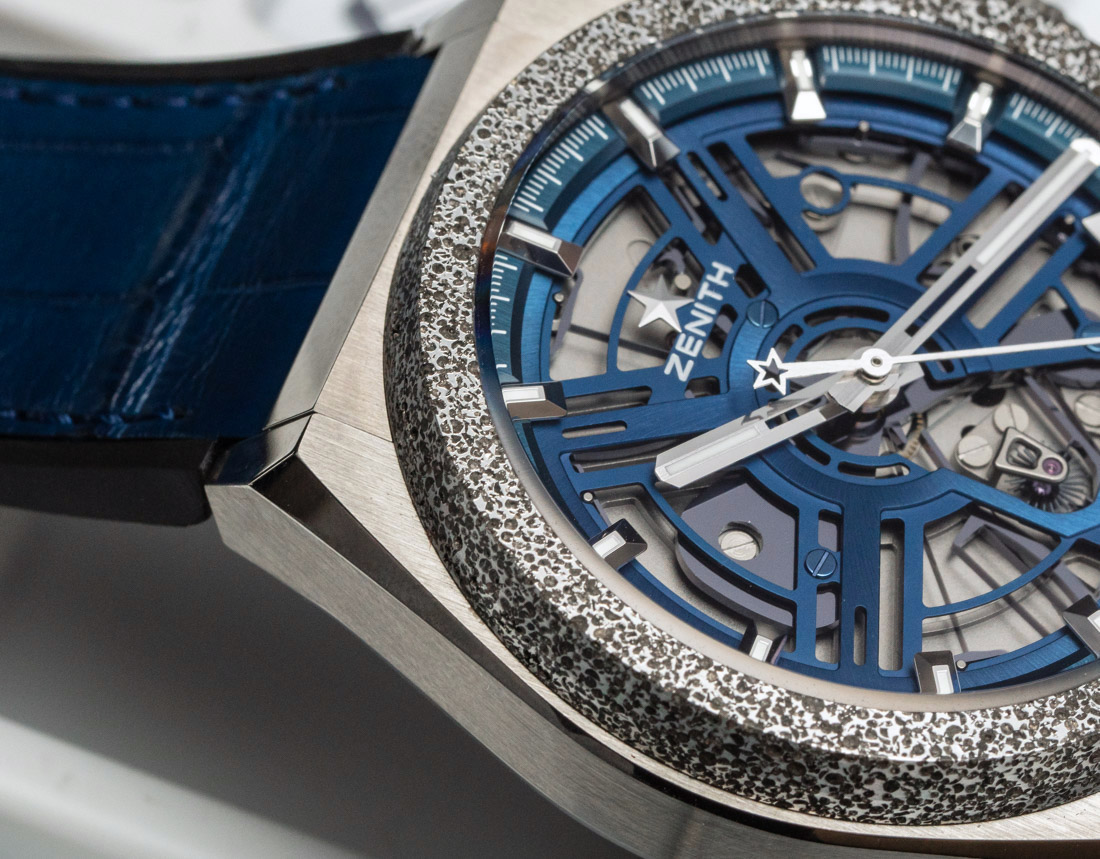 This may sound like an understatement, but even though the Zenith Defy Inventor is clearly a luxury timepiece, it is perhaps one of the most affordable very high-frequency mechanical watches available today — especially from Zenith. The 2017 limited edition of 10 pieces Defy Lab watch cost about $30,000. For 2019, the Zenith ref. 95.9001.9100/78.R584 Defy Inventor has a retail price of $17,800 USD. Learn more at the Zenith website.