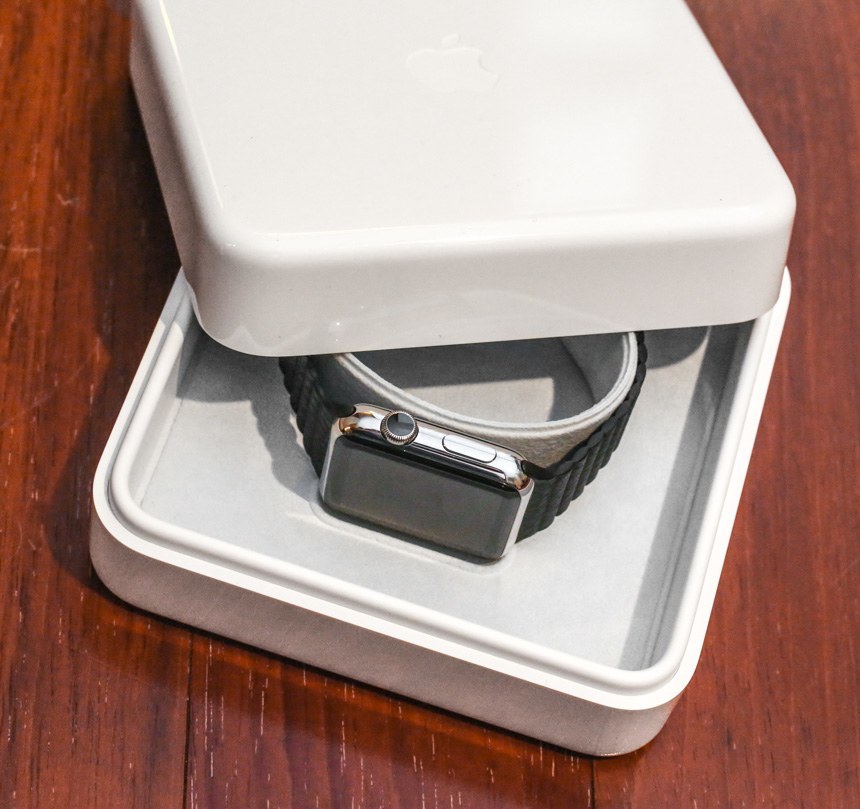 Today, April 24th, is when the Apple Watch officially launches for sale, even though many people will not receive their watches for weeks, if not months. Buildup to the Apple Watch has been totally unprecedented, as it has proven both a polarizing product, as well as one that has brought distinct demographics together in ways that I’ve never seen before. When else has a product been discussed so heavily by the tech industry, fashion industry, celebrity news industry, and watch industry all at the same time? Apple’s incredible investment in both research and development as well as marketing has created a force to be reckoned with in a segment that is still incredibly new. Smartwatches will continue to catch on, in my opinion, and products like the Apple Watch will act as major evolutionary steps in what is a future of everyone wearing – as opposed to carrying – communication and information technology. Anyone familiar with buying watches will immediately recognize that the Apple Watch box looks very much like a traditional watch box. Apple doesn’t focus on saving space, but rather a truly “premium” experience with packing material that isn’t meant to be thrown away. Those who have owned an Apple laptop will find the shape of the box familiar, as it is remarkably similar to the charger Apple ships its MacBook Air and MacBook Pro laptops with. The Apple Watch box contains an inner plastic box which can act as a storage or travel case, a small pouch for extra links when you size the steel bracelet, a microfiber cleaning cloth, and the charging cable. If you opt for the wonderful “Link Bracelet,” you’ll find a lot of great details, which start with how easy it is to size. No tools are required, and the process is both intuitive and well-refined, as you press little pushers behind each link to release them. The bracelet has a butterfly-style deployant clasp that is ingeniously designed to be almost flush with the rest of the bracelet. It makes me think back to older Rolex bracelets – which, on some models such as the Submariner, had thick, ugly deployants (which they thankfully engineered out) – given that Apple is the exact opposite with their amazingly thin solution. You cannot deny Apple credit where credit is due in really giving the Apple Watch an obsessive level of refinement when it comes to the wearing process as well as the materials. It sometimes feels as though Apple is acting like the son of the watch industry, and while the child is doing something different, they are eager to meet or exceed their parent’s expectations. I say this because in so many instances, you see elements of how the Apple Watch works or what it looks like that is clearly inspired by the traditional world of watch making. Materials and construction are fantastic, and I think most people will be surprised at just how comfortable the Apple Watch is. Of course, ultimate comfort will depend on people choosing the correct strap/case combination that is right for them, but for me, the Apple Watch has really proven itself to be something that I’ll be happy to wear for long periods of time. Let me clarify: not “incredible Bluetooth experience,” but rather, what it should be. Problems where smartwatches have trouble initially pairing with a mobile phone, and then also when staying paired or re-pairing are typical. I often have to manually tell other smartwatches to look for their host phone. So far, this hasn’t been an issue with the Apple Watch, as Apple seems to have ensured that maintaining a really reliable and constant connection between the devices is of paramount importance. This is good. There is a downside to having a smartwatch paired with your phone – and that is that it acts as yet another force that drains battery life. In our initial hands-on look at the Apple Watch here, I mentioned that to preserve battery life, Apple was offloading certain computational tasks to the phone. This and the constant connection between the two act to drain battery from your watch as well as your phone. Battery life drain on my iPhone 6 Plus wasn’t terribly increased, but I am pretty sure it was draining a bit faster than it did before.

One of the biggest surprises I had after only a few minutes of the Apple Watch on my wrist was that the notifications system was not annoying. It is easy to imagine that a constantly tapping and pinging system would get annoying. Apple cleverly made the Apple Watch alerts noticeable but rarely annoying. Also, while you are actively looking at your phone, most of the watch alerts are automatically turned off to avoid redundancy. Setting up the Apple Watch is smooth, so is sizing it. Most people will probably get stuck on the part where it comes to customizing your watch dial. There are just a lot of options and customization choices – and anticipate that for the first few weeks of anyone wearing an Apple Watch, they will be constantly tweaking the faces. I even like the fact that you can customize a watch face and save a template of it.

What is really interesting is to consider the probable near future when you’ll be able to buy or download new Apple Watch faces. Apple has not explicitly confirmed or even commented on the availability of if any when new watch dials will be available, but I think it is fair to assume it will happen in the future.  I hope it is sooner than later, since watch face customization is a big part of Google Android Wear and for the Apple Watch will lead to people’s ability to feel that their Apple Watch is unique. As you start to spend your first few minutes with the Apple Watch and exploring its various feature areas, I think most people will behave like me and start to consider all the potential. Not just of what future Apple Watches will be capable of, but how their new Apple Watch will fit into their lives in unseen ways, based upon experimenting with the functionality. In some ways, the Apple Watch is like a Swiss Army Knife, but most of the tools are for tasks most people aren’t quite familiar with yet.

Good examples are the animated sketch text messages that you can send to other Apple Watch wearers or the new activity tracker and fitness functions. These are new types of tools for many people, and how they become more useful will depend on a lot of experimentation and people sharing “ways that they use their Apple Watch.” Nevertheless, the Apple Watch has a lot of very logical features which are super cool, such as the ability to use it as a controller and second screen for things like phone photography, the ability for it to receive and make calls as well as send text messages, and how well Siri works on it. I want to say right now that everything the Apple Watch currently does, it does well. That isn’t to say that it does everything. No one expected the Apple Watch to be released and to be able and do everything it will eventually do. Either via OS updates or by eventually allowing developers to offer apps which tweak the core functionality of the Apple Watch – there are so many ways of adding more to what we already have.

So, even though the Apple Watch offers a refined experience when you use its available features, not all of those features are as fully fleshed out as I would like – which makes me eagerly await future versions. I do however appreciate that Apple did not include functionality that wasn’t ready for prime time and that isn’t very reliable. In using the Apple Watch today, I encountered a range of areas in the operation system that I think Apple can flesh out more. One example is in what options people have when it comes to e-mail. The design of the system seems to assume that people want to compose and respond to e-mails on their phone. You can view, archive, flag, and mark e-mails as read or unread on the Apple Watch. Also, at the time of this review some of the apps offered limited functionality. I like using Gmail for instance and the Gmail apps currently only allows you to view a snipped of the e-mail, while Apple’s native e-mail app (which also allows you to view Gmail message allows you to view the entire message).

Personally, I hope that in the near future the capability exists to fully read e-mails, delete them, or use Siri to respond to them directly from your wrist. For people like myself who regularly try to erode the volume in my inbox I am interesting in that type of functionality.

More so, I harbor the above desire because I really liked getting messages on my Apple Watch. The texting experience is pretty good, and even though you don’t have a keyboard, there are lots of good ways to respond. Most people will likely use Siri’s voice recognition system to dictate responses (you can also send them as audio snippets), but I also like the canned response options that in many instances actually adapt to the situation. So if the system reads a text message and sees that there is a question, it will try to come up with an appropriate answer as one of the automatically generated text message response options. That is certainly fun the first time you notice it. So much information people access on their phones is available much more easily on the Apple Watch. This includes basic stuff like the time, to other facts such as weather data, directions, alarms, etc… My hope is that the Apple Watch will allow people to spend less time on their phones and more time paying attention to the world around them. I have a feeling that people go to their phones to check for something basic and then end up being honked at by drivers behind them because they are staring at Facebook on their phone in their lap and not paying attention to that green light in front of them.