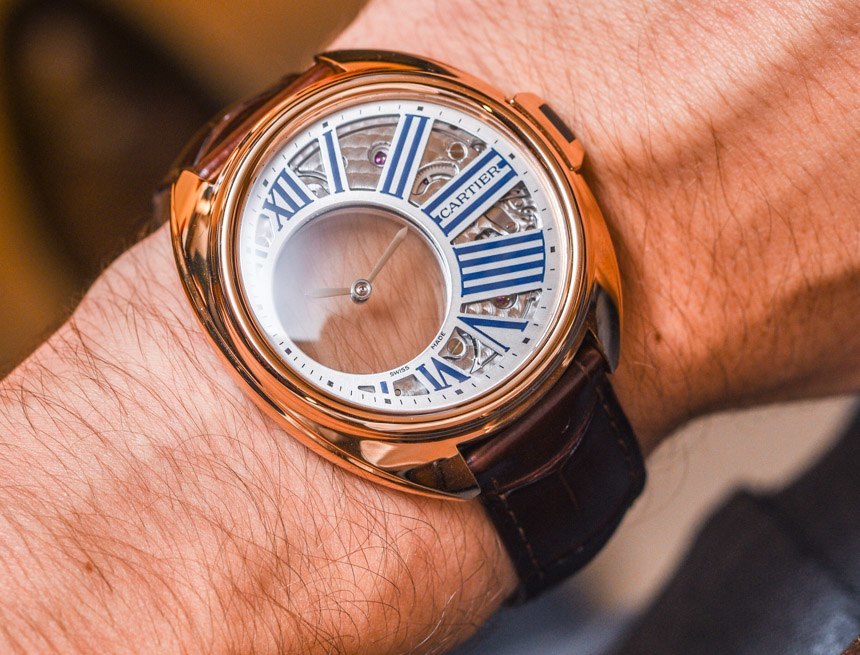 A few weeks ago, at Watches & Wonders 2015 in Hong Kong, we went hands-on with the Cartier Clé de Cartier Mysterious Hour watch – Cartier‘s way of bringing the Clé to its next, probably ultimate level, both in terms of design, as well as sheer mechanical complexity. It happens with cars all the time. A nice new mid-range model comes out (think of the ever-latest Audi A4, BMW 3-series, etc.) – and it looks great! But then, the “RS” beefed up sports version debuts, and everything looks sharper, better defined, and somehow more cohesive in its design… and you think, “could this be how they originally intended it?” The original Clé (hands-on here) I found to be beautiful (in a clever, intelligent, not necessarily immediately-obvious way) when Cartier released it earlier this year as an all-new, relatively affordable line of watches in January at SIHH 2015. I was happy about the moderate size, the interesting and various ways that the case is curved – it just looked and wore right. The Cartier Clé de Cartier Mysterious Hour takes everything the Clé is, and turns it up to 11. While it may not have been blindingly obvious at first, what made the Clé really stand out was its balanced, beautifully proportioned look – and the Cartier Clé de Cartier Mysterious Hour further evolves on that by playing with the rule of thirds and other basic (but difficult-to-master) rules of design and geometrics. Long, sloping curves are met with two perfect circles – the larger and the smaller dials – and before it appears to all be melting off your wrist, Cartier’s trademark bold Roman numerals and the rectangular cabochon in the crown add some strength to the overall appearance. As we always do, we tried to capture the essence of the design with our photography – there really was not an angle from which the Cartier Clé appeared to lack cleverly chosen proportions and that overall, positively overwhelming aesthetic.

As its name implies, the Cartier Clé de Cartier Mysterious Hour features Cartier’s “mysterious hours” indication which may have been around for a long time, but somehow, here, just utterly fails to show its age. The funny thing is that when compared to the – rather numerous – other pieces from the brand which comprised this funky time indication, this may be the first piece where it feels and looks as though it was an integral component of the design, and not a gimmick that stands above every other part. If this is the first time you are seeing this complication – let us keep it simple and call it as such – you may be wondering how the Cartier mysterious hours works. The solution, once you are told, seems blatantly straight-forward: the watch has its hands fitted to two separate, transparent sapphire discs which have teethed edges; the movement drives these discs as it would normally move the hands – and voilà, a floating effect is achieved. The downside? Beyond the still very annoying Cartier strap-clasp construction, you mean? Such watch dial constructions provide a splendid look at your wrist – and your arm hair or lack thereof – so the time sometimes is quarter past a birthmark, or 10-to-childhood-bicycle-accident-mark. And still, for some weird, almost inexplicable reason, the Cartier Clé de Cartier Mysterious Hour gets away with it. I wonder what it would look like with the same off-center design but with a solid dial – perhaps with some beautiful “clous de Paris” hobnail guilloché engraving as a backdrop – but I am afraid we may never see that. The Cartier 9981 MC manufacture movement that drives the mysterious hours (and minutes) comprises a relatively reasonable total of 158 parts and is just 4.61mm thick. Two days of power reserve is paired with a modern 4Hz frequency, keeping things up to pace with the basic requirements of the time. The movement is fully exposed via the large, sapphire case back so that one can admire this unusual, arched arrangement of wheels, gears, bridges – and the balance wheel capped off with a Cartier “C” rate adjust.