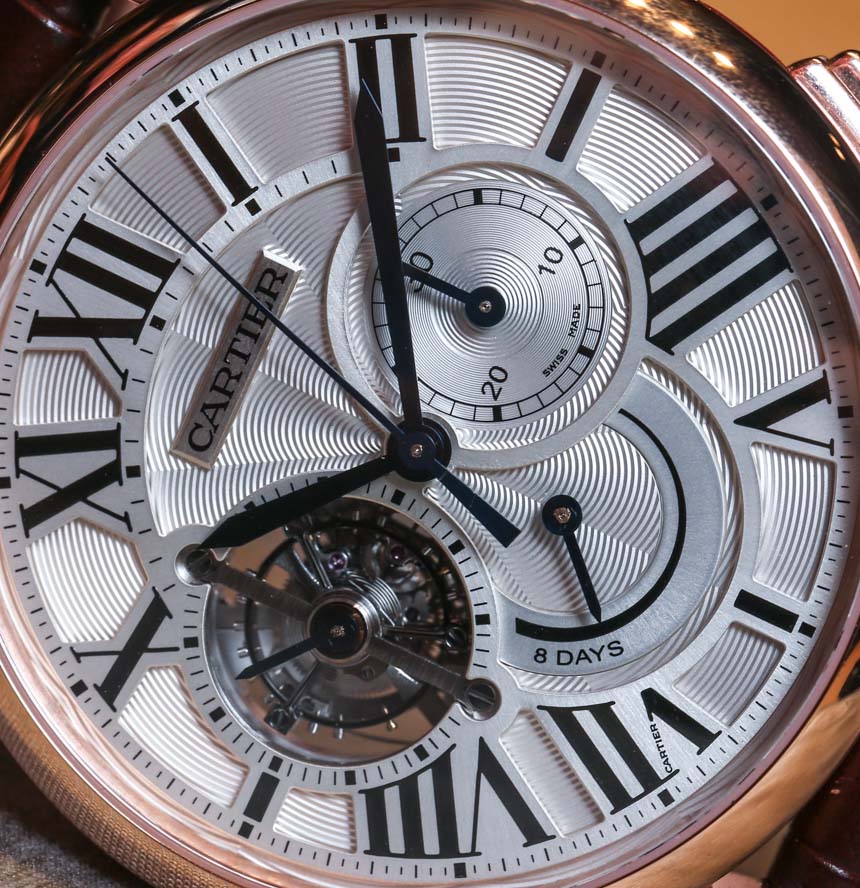 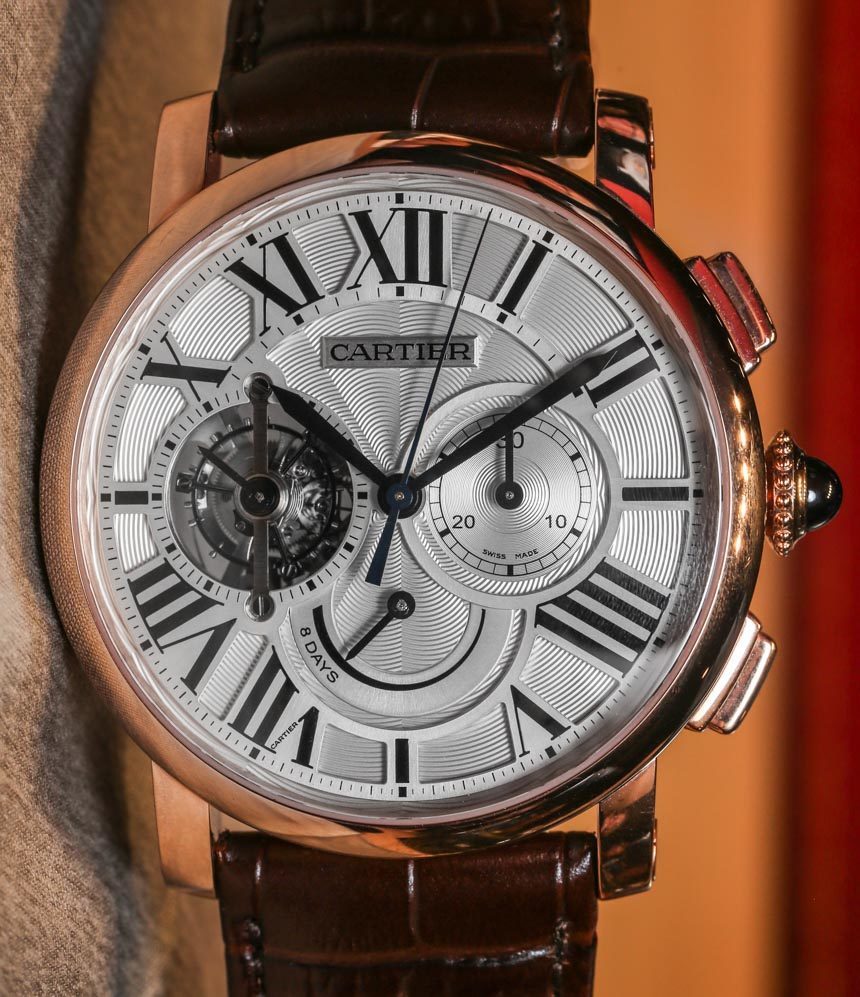 At SIHH 2014, Cartier presented a number of new pieces that were highly impressive from a technical point of view – and one of my personal favorites that follows that heritage in its own interesting way is the Cartier Rotonde de Cartier Tourbillon Chronograph. With SIHH 2015 coming up soon, it is a good time to revisit this piece and perhaps prepare ourselves a little bit as to what we are likely going to see from the brand in the upcoming year.

For the last couple of years, Cartier has stepped up its game and started to equip its watches with in-house manufactured movements. Its venture into the world of proprietary movements started with super complicated calibers – like the Astrotourbillon Carbon Crystal or the ID and ID2 watches. Those were followed up by a number of – relatively speaking – more accessible watches including those equipped with chronograph or simple date calibers. The Rotonde de Cartier Tourbillon Chronograph serves as a bridge between the manufacture’s ultra high-end – and basically unobtainable – haute horlogerie pieces and its more regular collections. Let’s see how this blend works out.

The Rotonde de Cartier Tourbillon Chronograph does what it says on the cover: its hand-wound movement offers a one-minute tourbillon exposed at the 9 o’clock position of the dial, a 30-minute chronograph counter at 3, and a most welcome power reserve indicator at 6, to help keep track of the movement’s impressive eight days’ worth of power reserve. Despite that impressive – albeit nothing groundbreaking – list of features, the movement inside this piece is interesting for another reason. 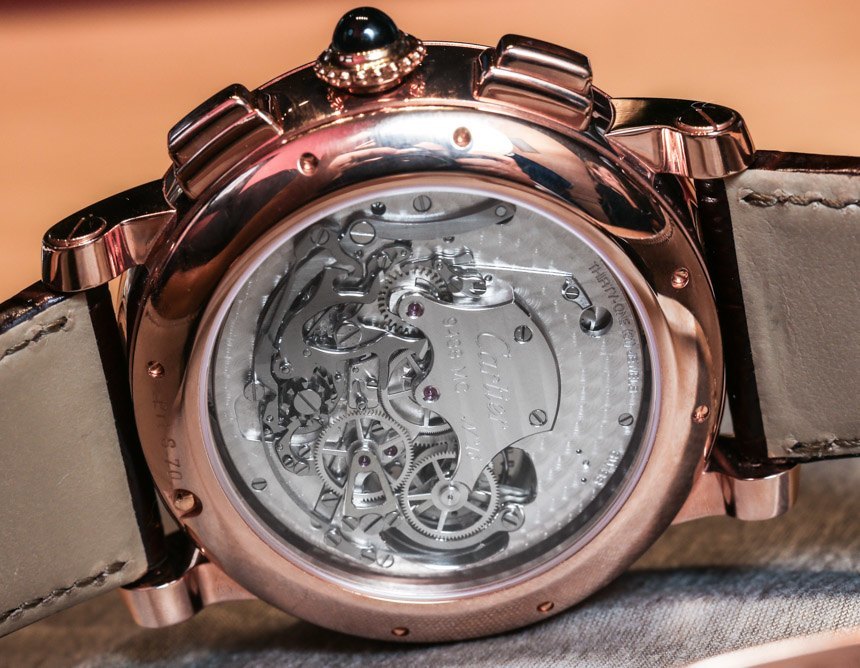 It sports a refreshingly unique layout for a hand-wound chronograph, thanks to the large Cartier-marked bridge that secures some of the chronograph’s wheels, and the busy arrangement of highly polished cams, levers, and of course a column wheel in the lower left segment of the case back. Beyond the layout of components, what renders this caliber 9438 MC more unique is the fact that it actually is not a movement designed and manufactured in-house by Cartier, but something they sourced from APR&P (Audemars Piguet Renaud & Papi, whom we visited not long ago). 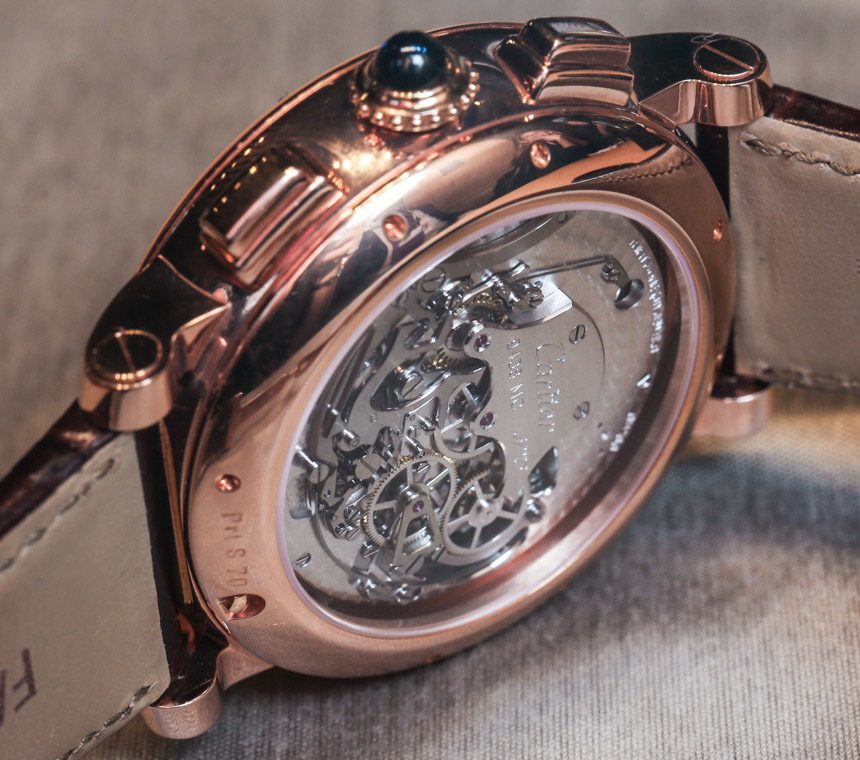 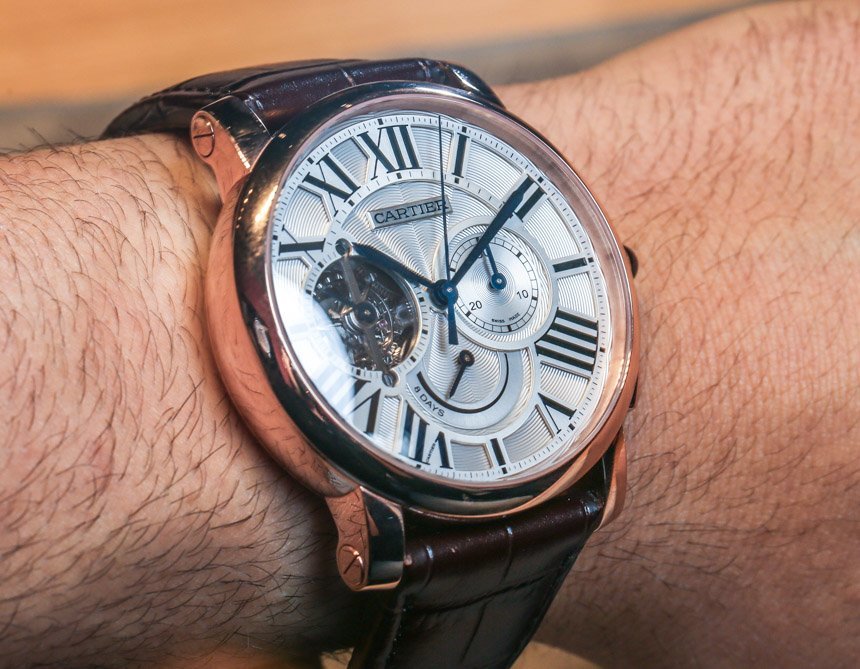 A mono-chromatic dial, fired up with blued hands and the splash of gold exposed in the opening at 9, lends a rather serious look to this piece. Thanks to the relatively small diameter of the movement the sub-dials sit quite close to one another, allowing for the use of bold Roman numerals all around the dial. Given the compact size of the 9438 caliber, one might wonder why the 45 millimeter wide, chunky case was necessary – a smaller case would make the sub-dials at least appear to be further apart, and the watch itself would be one of the relatively few highly complicated watches with a smaller case size.

A simple answer to that question is related to thickness. Watch brands try and achieve an acceptable ratio between width and thickness – a small but thick watch actually wears a lot worse than one with a bit more added to its diameter. 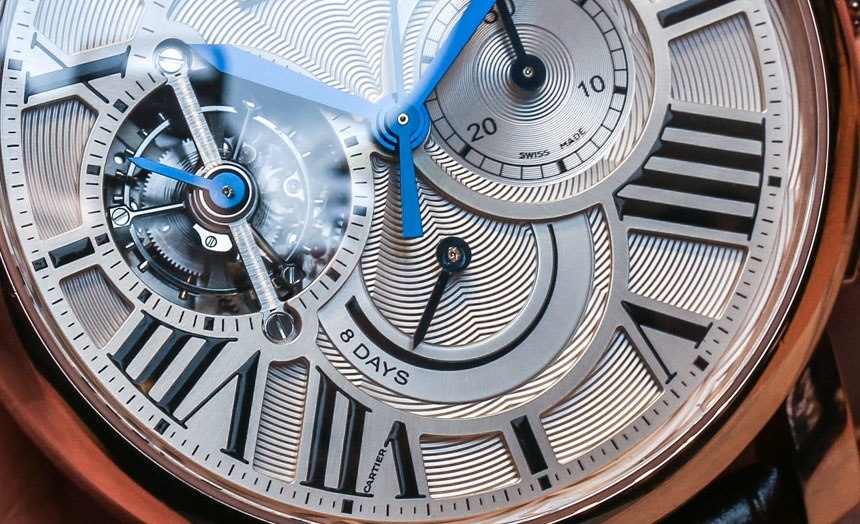 The Cartier Rotonde de Cartier Tourbillon Chronograph unquestionably is a niche offering – interestingly, it is also unusual within the collection, bearing a sourced movement, that is not entirely in line with Cartier’s direction as far as in-house movements are concerned. Nevertheless, it is nice to see major manufactures with plenty of resources invested into proprietary calibers harness the know-how of external specialists – as often times they are the ones who surprise us with the genuinely interesting stuff, by giving work to the crazy horological scientists, working behind the scenes. A shining example of whom is Carole Forestier-Kasapi, the head of fine watchmaking at Cartier, and a watchmaking mastermind who worked with APR&P at an early stage of her carrier. Limited to just fifty pieces, the Cartier Rotonde de Cartier Tourbillon is priced at 135,000 Euros or around $163,000. cartier.com