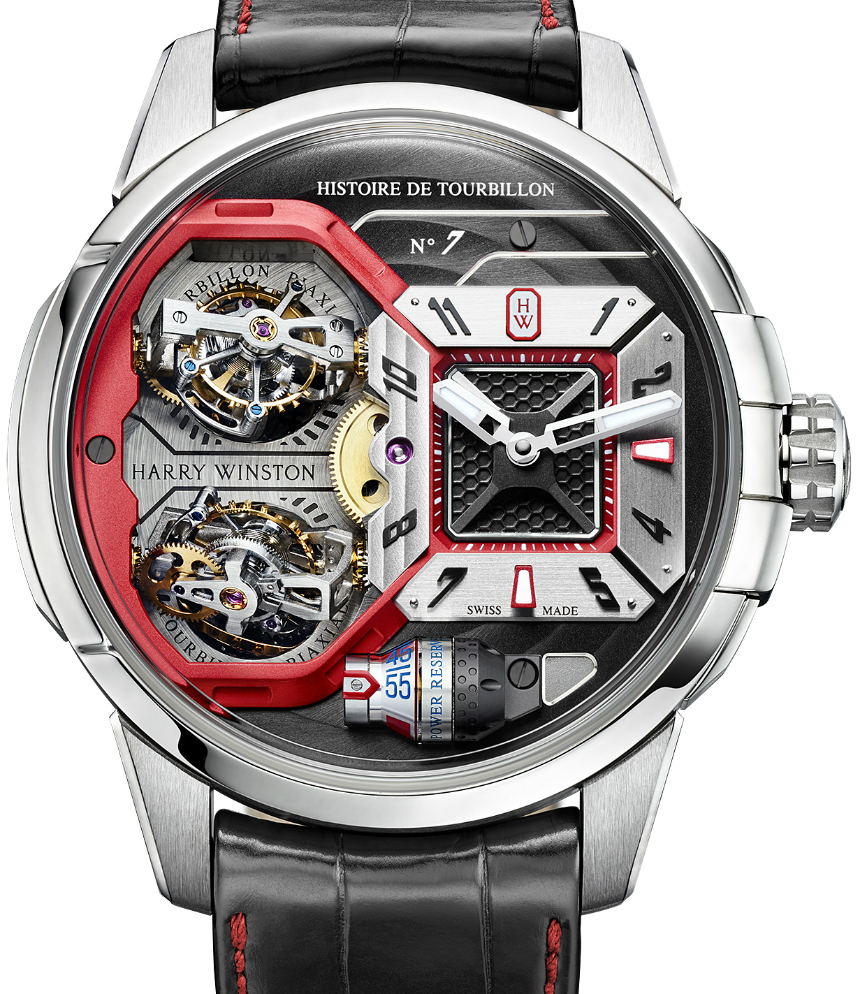 The Histoire de Tourbillon series is going to get Harry Winston in trouble. Seeing how every iteration of this series of incredible legacy watches has gotten exponentially more and more complex every year, we’re starting to wonder how on Earth will they be able to deliver something that can up the ante from the previous version. Still, it doesn’t look like 2016 will be the year the Histoire De Tourbillon plateaued, with the introduction of the downright galactic Harry Winston Histoire de Tourbillon 7 for Baselworld.

So how, exactly, does one go about topping 2015’s eye-watering, $600,000 Tourbillon 6, which marveled with nearly 700 parts, two time indicators, an 80-hour power reserve, and a tri-axial tourbillon – all housed in a titanic 55mm case? Easy. You double down with not one, but two bi-axial tourbillons married by a spherical differential that averages their behavioral patterns relative to position and gravity to yield a spectacular, synchronous ballet with time. Easy, right? On paper, the HW4502 movement might appear simpler, as it’s comprised of only a hair over 500 components and 84 jewels. Plus, this latest version doesn’t contain nearly as many different complications as the Tourbillon 6. Also, it’s still about the same size as your (above-average-sized) modern wristwatch, at 43.5 millimeter wide and 8.65 millimeter thick – and again, those are the dimensions of just the movement alone! Anyhow, that notable reduction in component count seems to have enabled the Harry Winston Histoire de Tourbillon 7’s movement engineers to focus on the technical wizardry behind taking a single tourbillon complication with two axes of differing trajectories that drive the escapements, and doubling it – a scientifically calculated feat Winston describes was accomplished with “extraordinary technical intensity.” Sounds about right. The two biaxial tourbillons each contain 117 components and each weigh 0.76 grams – that is… wait for it… a mind-boggling 0.0065 gram average weight per component in these “whirlwinds.” The balance wheels inside the tourbillons have been inclined at 30 degrees (read more about why that matters in this epic hands-on of the Greubel Forsey Double Balancier) and are ticking away at a relatively hectic 3 Hertz or 21,600 beats per hour. Biaxial means two axes of rotation, and that, in turn, usually means two separate timings. The situation is no different in the case of the Harry Winston Histoire de Tourbillon 7 either, as the interior cages of the tourbillons make a full rotation in 45 seconds, while the exterior cages come around in 75 seconds, respectively. This dance lasts about 55 hours, when you’ll need to manually re-wind the hand-wound caliber.

Focusing on the tourbillons has also simplified the dial and made the watch overall more legible – an accomplishment we appreciate just as much (if not more), as any further advancements in technical complexity. The dial is this rectangular, gently skeletonized design in anodized aluminum, with numerals and hands that you can actually read. Given the 50.9mm diameter of the massive, 18k white gold case, the dial should be about the same size as you’d see on a Reverso – so legibility shouldn’t be an issue anymore. You’ll also note that while the white gold case has been slimmed to a paltry ~51mm in diameter and 17.3mm in thickness the lugs have also been shortened and turned down, likely in an effort to further improve wearability as well.

Only twenty pieces of the Harry Winston Histoire de Tourbillon 7 will be made – ten in a red dial option, and ten in an anthracite version, and the jury’s still out on whether or not the price will exceed last year’s edition. Stay tuned for official pricing and impressions from our Baselworld 2016 coverage. harrywinston.com