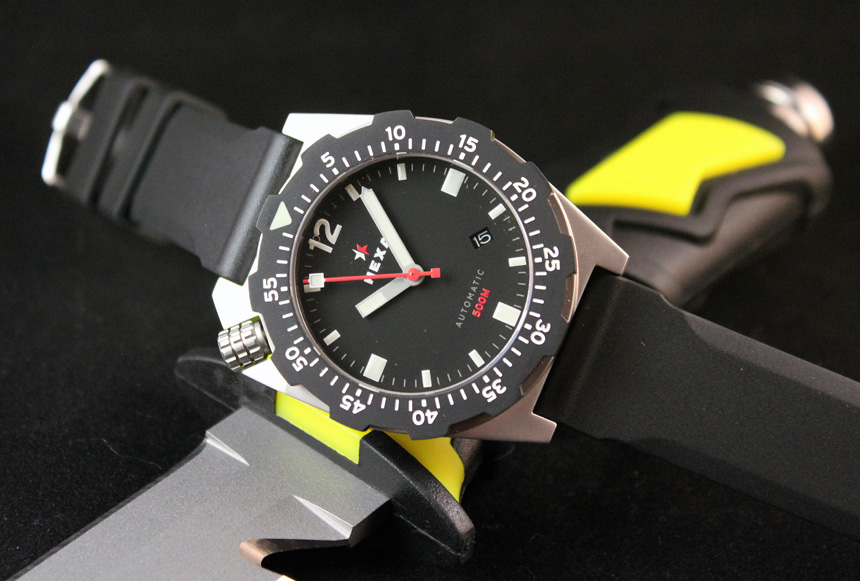 If there’s one way to describe the Hexa K500 it would be unapologetic. Over the last few years there have been a number of new companies specifically started in order to specialize in dive watches at reasonable prices. As more and more models come to market, these companies need to find ways for their watches to stand out from the crowd. Often they are split between taking design cues from the past or attempting to come up with a wildly new, and often outlandish, design unlike any other. The first method has been done ad infinitum and the other can be polarizing at best.

Hexa appears to have taken the surprisingly different route of practicality. I can almost picture a team of people sitting around a table (after a day of diving of course) and compiling a list of features that their ideal dive watch would have. If you were unable to substantiate your request it would be stricken from consideration. I have no idea if that is how the K500 came to be but it really wouldn’t surprise me in the least. When I say that the K500 is a dive watch I don’t mean that in the sense that it is in the style you would consider a dive watch, I mean that it was obviously designed for use while diving. That’s an important distinction and to that end the Hexa K500 is brilliant. The dial and hands of the K500 bear more than a passing resemblance to that of the Sinn U1. This is in no way a negative mark against the K500. There are enough differences to say that the K500 is not a copy of the U1 but both dive watches were designed for visibility and usability so some overlapping is understandable, though we feel it is important to mention it was influenced by German Sinn.

There are five bezel/case finish combinations on the K500 but all feature the same dial and hand set. The flat black dial is clean and offers fantastic legibility. Five minute intervals are marked with blocks of lume and larger blocks at 3, 6, and 9 o’clock as well as an Arabic numeral denoting 12 o’clock. The Hexa name and logo adorn the dial just below the 12 o’clock numeral while an understated grey “AUTOMATIC” and red “500M” sit on separate lines above the 6 o’clock position. There is a small date window near the 4 o’clock position. It’s incredibly unobtrusive and you would be forgiven if you didn’t notice it from a casual glance with the thin white numerals on a black background. This is the perfect implementation for the date on a dive watch in my opinion. Given a choice of having one or not I will almost always rather have a date indication on my watch. I don’t always need it but invariably I am not wearing one when I want it.

Hexa states that luminance is by American Lüm-Tec and this is lume worth noting. If you transition from a brighter environment to a slightly lesser one, you will definitely be seeing this watch glow. If you happened to find yourself at a 3+hour progressive rock concert where the use of cell phones is discouraged you would still be able to check the time during the last encore with ease. Laugh if you must but I consider it a valid test (don’t judge me). The hands of the K500 can best be described as light grey blocks.  You’ll often find similar hour and minute hand styles as either black or a bright contrasting color. Black hands leave the generous lume blocks to float on the equally black dial while bright hands standout from the luminance and draw attention away from the time-indicating tip. What Hexa did was give you a neutral color which allows for full visibility of the hand while not camouflaging itself against the dial. The seconds hand of the K500 is thin and red which allows for just enough contrast to be spotted quickly with the addition of a sizable luminous block towards the tip.

Hexa gave the K500 an aggressive cog-like grip on a 60-click unidirectional bezel. With the bezel being completely flat across the face of the watch I was initially concerned that the bezel would get caught on various objects or clothing and turn but that has not happened once. Perhaps a bevel on the outer edge would add a little more polish to the look of the K500 but it also might detract from the equipment vibe of the watch. I applaud Hexa for making the bezel 60-click. Would you honestly trust your air supply to the nearest thirty seconds or just round? You’re more likely to pad that rounded number as well. 120-click bezels have never made sense to me.

One common style element of popular dive watches I wouldn’t mind seeing on the K500 is a differentiation between fifteen minutes and the rest of the hour along the bezel indications but there are worse things to be wanting of. A prominent triangle with ample lume marks the bezel’s zero. The five-minute intervals are called out in Arabic numerals based on the font used for interstate signage which were designed to be extremely legible at speed. The bezel does feel rather busy but not needlessly so and the bezel rotation feels very good. It strikes the perfect balance between ease of use and prevention of accidental turning.