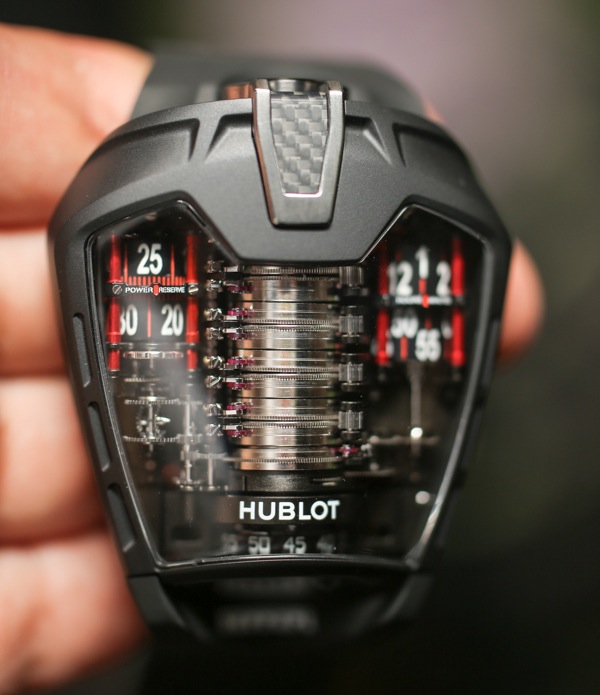 It is just like Ferrari to one-up someone. Hublot’s relationship with Ferrari continues with vigor into 2013 with the introduction of the intensely engineered Masterpiece MP-05 LaFerrari watch. With 50 days (days!) of power reserve this timepiece is record setting, and it also has a tourbillon escapement. There haven’t been a lot of watches in the Hublot Masterpiece collection: those watches which represent the top level of in-house made mechanical wonder at the brand. The LaFerrari is one of them however. Hublot’s take on luxury sometimes takes the form of gold and diamonds, but much of the time is about performance, mechanical intrigue, and modern design. The MP-05 is one of those. Visually speaking, the MP-05 LaFerrari is an extension of the Hublot La Cle Du Temps (hands on there). Those both share a sleek, tapering black case with semi-organic design as well as horizontally mounted tourbillons that peek out on the lower part of the case. The MP-05 LaFerrari goes much further to incorporate design DNA from the 2013 LaFerrari car (where the name is borrowed from). Both the watch and the car are purposeful in their look, but also are given smooth lines. Much of the dial is open, with an impressively shaped sapphire crystal and view into much of the Hublot made caliber HUB9005.H1.6 manually wound movement. Hublot claims that the new movement contains more parts than any other movement they have produced in the past. That is 637 parts in just the watch movement itself. Functionally, the movement offers the time and power reserve indicator, along with a tourbillon. Much of the complexity is of course in the design, but also to allow for the very long power reserve. That much power is produced by 11 mainspring barrels that are all coupled together. Imagine the time it takes to wind it. Interesting that synthetic rubies seem to be used as frictionless rollers over the barrels as they slowly move to reduce wear.

In fact, winding is enough of a chore that Hublot includes some tools to help. The LaFerrari watches come with a small electronic screw-driver and tool set that allows you to not only wind, but set the watch. That’s right. As far as I can tell, you can only wind the watch with the special tool. Why a tool? Mainly because of the torque (and time) needed to wind the many barrels. Winding a movement forever is not luxury (but apparently a small Hublot power tool is). The MP-05 LaFerrari watch will come in a matte black case done in titanium with a rubber strap. The design is progressively entertaining with its unabashed expensiveness and focus on bragging-right spec specs. In fact, with a slightly similar design and look, the Hublot MP-05 is a Rebellion T-1000 killer. Rebellion’s watch also tells time on barrel drums like T-1000, and also has a similar long power reserve. Rebellion was known for breaking a few records with the 40 day power reserve in the T-1000 collection. Nevertheless Hublot sweeps in to create a watch with an even longer power reserve, and then just throws in that tourbillon. So in some ways the MP-05 watch is simply a removal of Rebellion’s main item of pride and offering those bragging rights to Hublot. With carbon fiber on the case, there are some light design cues in the watch from the Ferrari car. The top crystal is one, and the entire case design is meant to mimic the shape of the beautiful car, though it is a light connection. The Ferrari relationship allows Hublot to experiment in new areas and work with the famous automaker to produce rather original timepieces such as this one. It doesn’t even mater that the MP-05 isn’t that easy to read (even though the numerals all have SuperLumiNova on them). Limited to just 50 pieces, this is another completely wild watch, and precisely the reason we get excited to meet with Hublot in this and all other years at Baselworld. Price for the Hublot Masterpiece MP-05 LaFerrari watch will be about 300,000 Swiss Francs. hublot.com