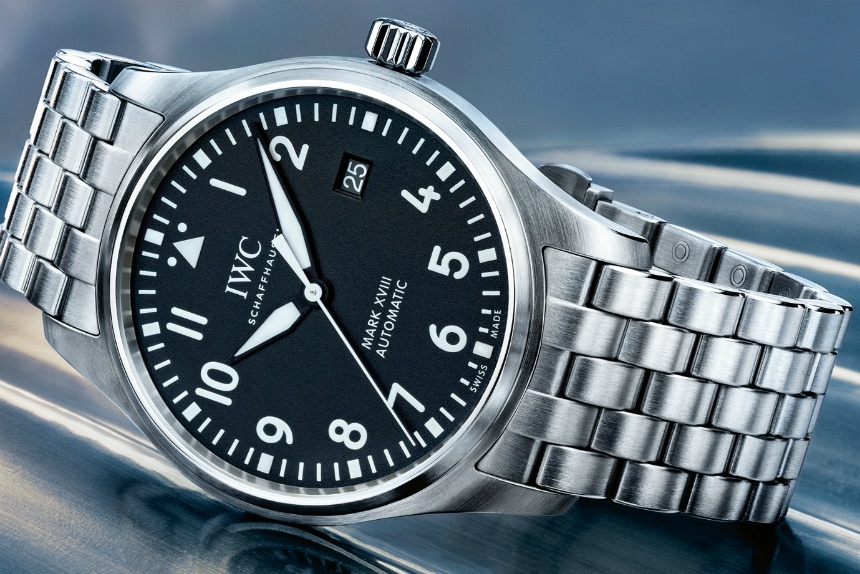 Directly inspired by the 1948 Mark 11 watch, the new entry-level IWC Pilot’s Watch Mark XVIII for SIHH 2016 is a watch that the brand says is “reduced to essentials.” A simple three hand watch designed for maximum legibility, the piece is a welcome addition to the IWC Pilot Watch line. It’s simple, but a handsome base IWC designed for maximum legibility, and is my idea of simplicity at its best. IWC is making 2016 the year of its Pilot Watch update, and along with releasing large watches like the IWC Big Pilot’s Heritage Watch 48 & 55 (more on those two here) available in 48mm and an almost comically large 55mm, but there does seem to be an overall pattern of shrinking the line down a bit. Interestingly, they are releasing the IWC Mark XVIII just one millimeter narrower than the current Mark XVII. At 40mm wide, IWC has also made a decision that applies to a few of their Pilot watches this year, the removal of the triple date display. I think it’s a move that will prove pretty popular, as a triple date window just really is unnecessary in the eyes of so many buyers. All these aesthetic decisions have to do with IWC’s desire to go back to a more traditional look for the Pilot’s watch line. This involves design cues like bringing back the “9” that was taken out of the Pilot line in 2002. The “12” is replaced with a slightly pareidoliaic (fancy word for seeing human faces in objects) triangle with dot on either side. The entry-level IWC Pilot’s Watch Mark XVIII (references IW327001, IW327002, and IW327011) is going to be available on either the calfskin strap or the stainless steel bracelet and comes in either a black or silver-plated dial. Also, there is 60 meters of water resistance for this watch. On the case back, you’ll see the Junkers Ju 52 airplane, which was the most common aircraft used for civilian travel in the 1930s. The IWC Pilot’s Watch Mark XVIII has the automatic 30110 calibre movement, which operates at 4 Hz and has 42 hours of power reserve. This is the same as the outgoing Mark XVII and is a solid workhorse movement. As an entry-level watch, I think the IWC Pilot’s Watch Mark XVIII is going to have a lot of appeal for buyers appreciating the cleaner look (especially the omission of the triple date window for a single date). Again, the three models are: the Ref. IW327001 with black dial and black Santoni calfskin strap with a price of $3,950; the Ref. IW327002 with silver-plated dial and black Santoni calfskin strap also has a price of $3,950; and the Ref. 327011 with black dial and stainless steel bracelet with fine adjustment clasp with a price of $4,950. iwc.com