At Baselworld 2017 we saw the release of the limited edition Maurice LaCroix Aikon Bronze watch. The Aikon line was debuted in 2016 and Maurice LaCroix is wasting little time in getting in on the trend of using bronze. It’s refreshing to see the use of bronze in something other than a dive watch (or sports watch) and Maurice LaCroix is making a safe bet in the production of 388 limited edition pieces of the watch. The watch is all about attainable sophistication and the romantic appeal of the evolving patina of bronze. It’s a lot of character at a fraction of the price of other bronze offerings from competitors. That being said, the design is love it or leave it and you’ll have to accept that it’s only available in a quartz movement. Released in 2016 as a successor to their aging Calypso watch, the Maurice LaCroix Aikon watch is an interesting value proposition from the brand, albeit one that requires being on the right side of the polarizing design (a fact the brand touts, actually). While not innately avant garde or outrageous, the 6 “arms” that appear as if they are almost clasping the bezel into place, horizontal dial stripes, and a tendency to promote the models with Roman Numeral markers (though there are versions with indices, though again, these are not the versions the brand puts forward) all make for a watch that still reminds me of the early 1990s. This is a space occupied by watches like the ubiquitous and often too small TAG Heuer Link watches you’d see in the ’90s. This Maurice Lacroix Aikon Bronze watch however does move the needle forward for the line. Yes, the use of Bronze is far from fresh or original but that doesn’t mean that the end product doesn’t succeed. The use of the sepia-friendly romantic bronze is all over the place and that’s not news to anyone, but it’s nice to see the material used on something that isn’t a diver but rather the sleeker and dressier Aikon. In fact, the contrast of light and dark hue on the dial actually has me enjoying the horizontal stripes on the dial as they add to the overall brooding “leather, cigars, and whiskey” bronze aesthetic the watch is going for. I think it’s clear that Maurice LaCroix is dipping their feet in the water with the use of bronze here but are also playing with changing the conversation when people think about the brand. Given that there are only 388 pieces being made, it’s near impossible that their run won’t sell out but again, it’s obvious that Maurice LaCroix wants to get this watch on the wrists of a demographic that might be overlooking them at the moment. In other words, this is the brand’s foray into making their most Instagram/wrist shot-friendly piece. Personally, I commend the brand for recognizing that they could do a better job at marketing to this demographic and making a serious effort that’s successful in its execution like the Aikon Bronze. The watch itself is 44mm wide and 11mm thick, and I’m glad they opted for the relatively wide case size because it really does convey the masculine personality Maurice LaCroix is trying to get across here better than a smaller case would. I believe the standard three-hand Aikon watches are smaller at 42mm wide and the chronograph shares this 44mm wide case. Now, the fact that this watch uses a quartz movement speaks to the type of buyer that’s going to gravitate to this piece. I can imagine a younger watch enthusiast who owns their first or second serious mechanical timepieces and drools over pieces like the Tudor Black Bay Bronze diver or even the Eterna KonTiki bronze diver but can’t shell out the premium price for the bronze novelty. For them, here’s a watch that will have the same charm of the bronze changing throughout time at a price of 1,350 CHF. The finishing, dial, and overall quality of this piece are really well done especially when you consider the price point. Again, this does come at a price when you consider there’s a quartz movement. Though, the slimness and convenience afforded by a quartz movement should be acknowledged as well. The case is obviously made of bronze, and the brown dial is light at the center and grows darker outward. It’s a nice effect that draws the eye to the piece and actually keeps it from looking drab due to the bronze and brown combination. The hands, indices, and (thankfully) Arabic numerals are all rose gold plated with white Super-LumiNova. To bring the look together is the “vintage” brown calf leather strap with a bronze Maurice LaCroix logo that the brand has made its signature. I think Maurice LaCroix has created a piece that packs a lot of style, personality, and a contemporary vintage aesthetic in this bronze watch and it’s going to have no problem finding 388 buyers who are interested in it. Yes, it’s following a pretty saturated market trend but in fairness the Aikon Bronze stands out from the numerous dive watches that have been done in bronze. A sophisticated yet conversation-sparking piece, the Maurice LaCroix Aikon Bronze is priced at 1,350 CHF. mauricelacroix.com 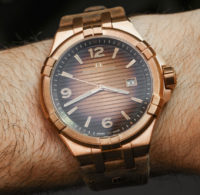 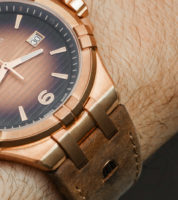 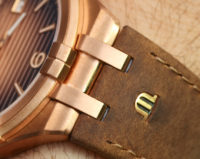 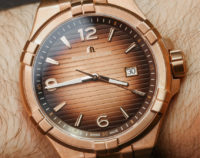 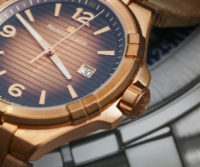 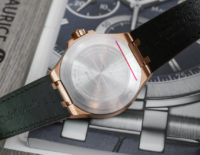 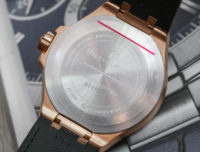 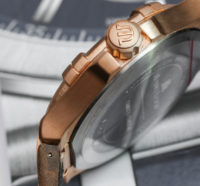