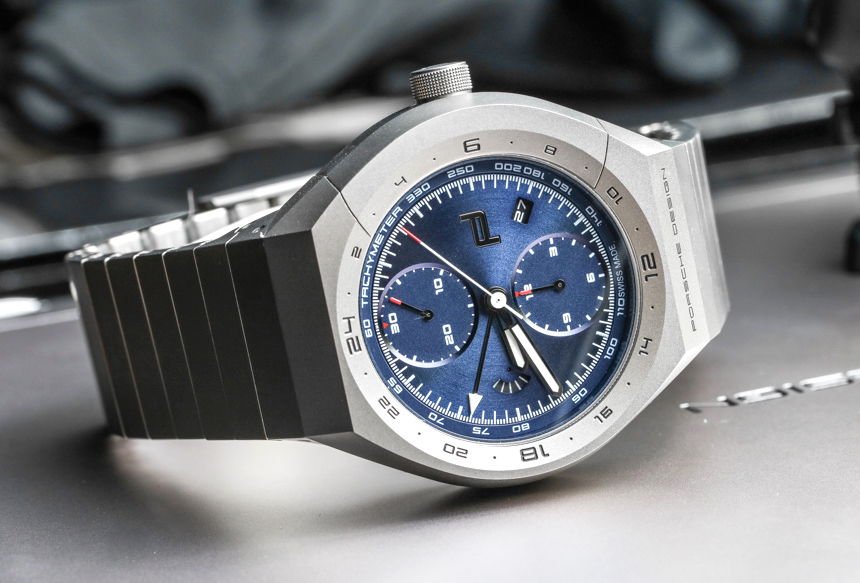 Porsche Design  is one of those brands that has never been afraid to do things a little differently. A quick glance at their catalog is enough to demonstrate their fearlessness when it comes to watch design. Their simple time and date model, the 1919 Datetimer, for instance, has an unusual case shape with skeletonized lugs. And for 2017, the new Porsche Design Monobloc Actuator Chronograph takes inspiration from its predecessors and has one of the most unusual chronograph pushers we have seen. To begin, the Porsche Design Monobloc Actuator Chronograph comes in a titanium case that measures 45.5mm wide and 15.6mm thick. This is by no means a small watch, but thanks to its titanium construction, it feels relatively light. And because it has integrated lugs, it also wears a tad smaller than that measurement would suggest. Nevertheless, as I mentioned, the Porsche Design Monobloc Actuator Chronograph watch commands considerable wrist presence. Now, I mentioned earlier that the chronograph pushers are integrated into the case, and this explains why the Monobloc Actuator Chronograph doesn’t have a distinct bezel. The bezel, which is also integrated into the case, has an engraved 24-hour scale for the GMT complication (more on this later), and you’ll notice a break in the bezel from 3 o’clock to 9 o’clock. This is the rocker switch for operating the chronograph. Push it inwards at 3 o’clock towards the dial and the chronograph will start. Push it again to stop, and push the bezel inwards at 9 o’clock to reset. This is a single rocker switch, while its predecessor – the Titan 1 Chronograph – made use of two rocker switches. It is pretty cool, and it gives the watch a very clean side profile. But beyond that, it has also has some practical and functional benefits. Because the rocker is linked to the movement from within, Porsche Design says that this allows the movement to be better protected from moisture and dust. In fact, the Monobloc Actuator Chronograph is water resistant to 100 meters and the chronograph can be activated underwater! According to Porsche Design, the unique rocker activation is actually inspired by the valves that lift and close in the new Porsche 911 RSR’s engine. Since the Porsche Design Monobloc Actuator Chronograph is powered by a Valjoux 7754, the dial has the instantly recognizable Valjoux 12-9-6 arrangement. There are a couple of different dials and case colors to choose from. There’s a single limited-edition model called the Porsche Design Monobloc Actuator 24H Chronotimer, and it has a titanium case with titanium carbide coating and a dial with carbon fiber print.

The movement is visible through the display case back and it is quite nicely finished for a watch in its price point. There’s a nice Porsche Design rotor, much of the bridges have perlage, the screws are blued, and the parts look cleanly machined. Then, there are three non-limited models, one with a matte black dial, another with a sunburst-finish black dial, and finally, one with a sunburst-finish blue dial. The model with a matte black dial comes with a black titanium case, while the other two models with sunburst dial finishes will come with a silver titanium case with a glass-bead-blasted finish. The watches will come with either a full titanium bracelet or a rubber strap. Both are comfortable to wear, but the titanium bracelet is definitely the better-looking of the two. It might look simple, but it complements the case exceptionally well and feels very solid too. The dials are well-executed and highly legible. At 12 and 6 o’clock, you have the 30-minute counter and 12-hour counter, respectively. These two sub-dials are slightly recessed into the dial, which adds depth and also makes them easier to distinguish and read at a glance. And at 9 o’clock, there is the running seconds, which is represented by a small aperture with a disc with radial patterns that spins to tell you the watch is running. The hour and minute hands are sword-shaped, thick, and filled with lume, while the GMT hand is represented as a white pointer that extends to the edge of the dial, making it easy to read the 24-hour time. The thin chronograph seconds hand also extends to the edge of the dial, allowing it to be easily read with the tachymeter scale that’s on the outside of the minutes track. If there’s anything I’m not fond of, it is the date window, but only because I’m generally not fond of date windows at 4:30. If a date is absolutely necessarily, I would rather they be positioned at the more traditional positions of 3 or 6 o’clock, but that’s just me.