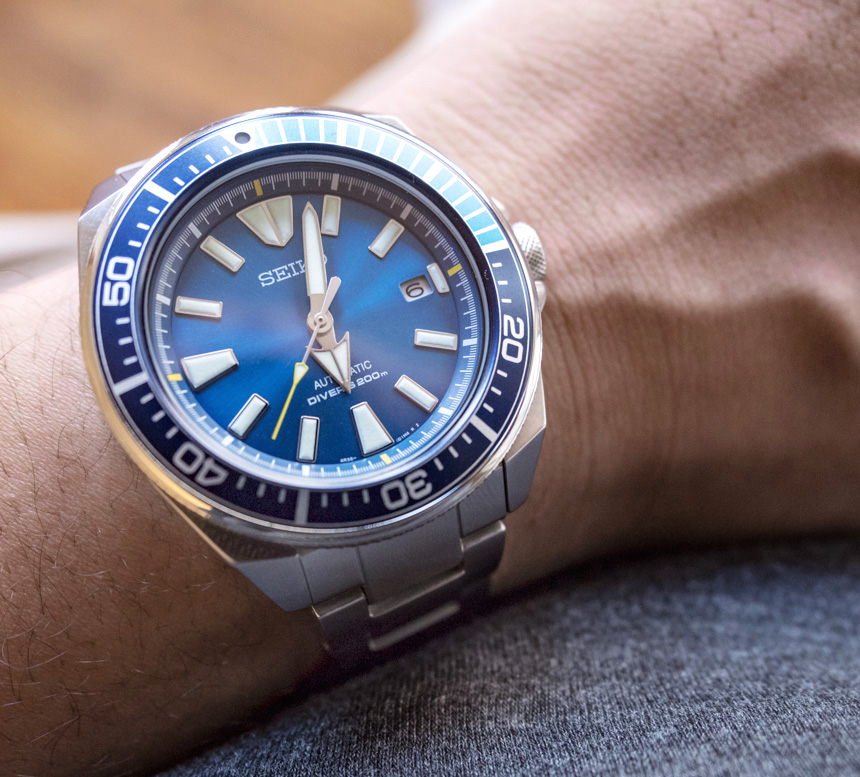 Earlier this year, Seiko introduced two “limited edition” watches to their Prospex line, the Blue Lagoon SRPB11 “Turtle” and SRPB09 “Samurai.” The new Turtle is similar to the SRP777 we reviewed here but it is the SRPB09 Samurai that grabbed my attention. The original Seiko Samurai watch was introduced in 2004, only to be discontinued a few years later. One of the less common “nicknamed” Seikos, I was thrilled to see that the Samurai was making a comeback (in blue, nonetheless). It’s funny, but when I got this watch I wasn’t actively looking at watches to buy, much less divers. But, as with many other Seikos, the value proposition was too good to resist at $550. Oddly, perhaps, I always seem to inadvertently have a blue Seiko dive watch in my rotation. I had a Seiko SNZH53 to quench that thirst and while that is a great value watch, it lacked some refinement in the design and finish, and so was slowly falling out of my usual rotation. When I saw the Seiko Prospex Blue Lagoon Samurai SRPB09 and finally came across one for sale, the design, famed Prospex quality, and reasonably affordable price point worked in tandem to push me over the edge. The original Samurai (SBDA003) was produced from 2004-2008 and the watch’s moniker was derived from its handset which resembled a Samurai’s sword. Though this handset has been replaced in the SRPB09, the angular lines of the case, specifically the unique lugs, have been retained from the original Samurai. This watch combines all the elements that made the Prospex line famous; history, reliability, great value, and a unique case design that I’ve always loved and admired. Though I also quite like the Turtle cushion case, for me, there’s nothing like this angular classic design. The stainless steel case clocks in at 43.8mm wide and 13mm thick which is par for the course for Seiko divers. While this is quite large, the watch was designed to be a tool watch and the priority during a dive is legibility of the dial/bezel. You’ll be happy to hear, however, that for the average desk diver like me, the watch wears small and quite comfortably, thanks to the short, slanted lugs. My wrist is 7″ around, which should give you an idea of how the watch would wear. The bezel is anodized aluminum and 120-click, unidirectional with excellent grip. While I am not a diver, I do live in the cold (and landlocked) Midwestern United States and the bezel had plenty of grip even with a couple of layers of gloves on. I’m also happy to report that the bezel pip lines up nicely with the middle of the 12’o clock marker, something my SNZH53 Seiko 5 just couldn’t seem to do. The crystal is flat Hardlex and the watch has a solid steel Tsunami caseback, with a “LIMITED EDITION” engraving. Besides the angular lugs, the other notable features on the Seiko Prospex Blue Lagoon Samurai SRPB09 are the screw-down crown and the drilled lugs. The drilled lugs are a blessing for someone prone to frequent strap changes, and the screw-down crown is well proportioned with a texture that helps add visual interest and improve grip, and the crown guards ensure the overall design remains coherent. While neither drilled lugs or a screw-down crown are rare or unique to the Seiko Prospex Blue Lagoon Samurai SRPB09, they serve as good examples of how this watch marries form and function. The highlight of this Seiko Prospex Blue Lagoon Samurai SRPB09 watch is, of course, the color scheme. The bezel is two shades, with the first 15 minutes in a turquoise blue while the rest of it is a more familiar deep blue that we’ve seen in several other Seiko offerings. The dial is similar to the dark blue of the bezel but has a semi-glossy finish that makes it wonderfully multi-faceted – so much so that I spent several minutes in the sunlight enjoying the interaction between the light and the dial. Head-on or in shade, the dial looks matte but there is a sunburst quality to it when light strikes it from an angle. The Seiko Prospex Blue Lagoon Samurai SRPB09 has only a date window, leaving out the day of the week. No complaints from me as I’m someone who prefers to have no day/date window at all if given the choice, but it’s at least not as distracting to the dial’s symmetry. The hands for this Seiko Prospex Blue Lagoon Samurai SRPB09 are very similar if not the same as those on the Seiko Monster line, which are super legible and do the job very well, not leaving much to be desired. The lume, which is Seiko’s proprietary LumiBrite compound, is one of the best I’ve seen. I wouldn’t be surprised if the watch could ruin your circadian rhythm while sitting on your bedside. It also fades in an almost linear fashion and keeps the dial legible for plenty of time. I had no trouble checking the time even at the end of a two-and-a-half-hour movie.