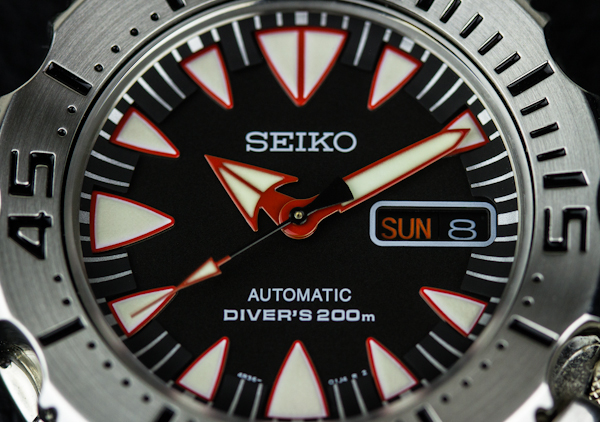 In the Watchnerd world, few watches signal your progress out of the department store and into the forums like buying something from the Seiko SKX range. Something of a dive watch “rite of passage,” the drug of choice is often the SKX779/SKX781 (orange and black, respectively) dubbed “The Monster.” Years ago, after buying and very much loving an SKX007, I was on the hunt for my next diver and came across the unique and rather un-pretty SKX779 “Black Monster”.

Featuring the same simple but reliable 7S26 automatic movement, this cheap Seiko was exalted by my fellow dive watch forum brethren as being THE Seiko diver to own as it represented huge value thanks to an excellent bracelet, good bezel action, and stupendously bright lume. Being a relatively cash-poor student at the time, I looked at this sub $200 Seiko diver with much excitement and soon took delivery of my very own SKX779 Black Monster. Since this is not a review of the SKX779, we will fast forward many years to the present to find that I had sold that older Seiko Black Monster as I eventually felt it to be technically similar but aesthetically inferior to my Seiko SKX007 watch. The Monster was everything I was promised to me, but the relatively out-dated movement (no hacking or hand winding) and very casual “tool-ish” design meant it would often play second string to one of my other watches Having said that, we still feel that it was/is an extremely good “first mechanical watch choice.”

Today still, many years after its release, you can still buy an SKX Monster for less than $200 and it is one of the best automatic sport watches I can recommend at that price point. Solid, reliable, nicely built, famously bright lume, great bracelet, and it doesn’t look anything like a Rolex Sub. Seiko must have noticed the widespread online fandom for the Monster as they released a cheaper Seiko 5 version (the 7S36 powered SNZF range) and then more recently they began teasing the existence of a full-fledged Monster update which we review in this article. Thanks to a leaked photo, Seiko fans learned months ago that we would see a new Monster. Seiko would be releasing a follow-up to their forum darling and not only would it retain much of the original styling, but it would also now be powered by their 4R36 automatic movement which features both hacking and hand winding. With general availability starting to appear this past August 2012, we were eager to learn how this new Monster stacked up against the original?

The new Monster can be had in a total of five versions spanning a standard black dial (SRP307K1), orange dial (SRP309K1), black case with an orange/brown sunburst dial (SRP311K1), black dial with red markers (SRP313K1), and lastly with a black bezel and chapter ring over an orange dial (SRP315K1). All models are water resistant to 200m, feature a unidirectional countdown bezel, screw-down crown and a Seiko-traditional day/date display.

The SRP313K1 featured in this review, can only be had on the rubber strap. I chose to order the SRP313K1 as I felt its red hands and markers were a good fit for what would be at most a weekend and water sport watch. I do very much wish this model could be had with the bracelet, but it should not be too difficult to source the bracelet later as the new models can fit a legacy 20mm SKX779/781 sourced bracelet. Moving on… From the moment I received the watch in the mail, I could feel rose-colored glasses lowering over my eyes. I removed the new Monster from its box and was surprised by how well it fit my memory of my SXK779 Black Monster. Seiko has changed very little from the original design, retaining the case size, hallmark bezel and hardlex crystal that made the original so great. Still featuring a 43mm case, the SRP comes in at 13mm thick and only 47.5mm lug to lug – so this is good for those small-wristed types out there (even though it is not a small watch per se). Furthermore, on the rubber strap, the SRP313K1 weighs in at a reasonable 113 grams.

Seiko has massaged the dial design towards a more simple layout by deleting the minute numbering and opting for triangular tooth-shaped indices that I rather like as they compliment the legacy hand design. The SRP313K1 is characterized by a red outline treatment on the hands and hour markers which really pop on this otherwise colorless watch. Seiko has also opted for a knurled crown on the new Monster that is similar in look and feel to the crown fitted on the Marathon TSAR/GSAR divers. While the new crown allows an excellent grip, I do feel the old crown was a bit better looking. One of the hallmarks of the original Monsters was the very bright and long-lasting luminous treatment on the hands and markers which use Seiko’s own LumiBrite compound. As I do not still have my old SKX779, I cannot offer a direct comparison of the lume on the hands and markers but rest assured that it is exceedingly bright. Longevity is excellent with the color being a bit lighter than than the SKX models. The user experience is the same, very bright, quick to charge, excellent legibility and it will easily outlast a movie screening and will be faintly glowing many hours later. The main reason for Seiko to update the SKX Monsters (which are still quite popular) was to include a new movement as the caliber 7S26 had grown a little old and many owners wanted hacking (where the second hand stops when the crown is pulled out) and hand winding (rather than just automatic winding). The new SRP range is powered by the Seiko caliber 4R36 which is a step up from the 7S26, featuring both hacking and hand winding, while still retaining the day and date display of the 7S26. The 4R36 is a 24 jewel movement which runs at 21,600 vph with a power reserve of 41 hours.

My example appears to be running about +5 s/day. Note: I do not have any legitimate timing equipment, the 5 s/day measured is averaged out over a series of days with the watch on a winder. Your results may (and most likely will) vary. Winding is smooth and the crown is easily manipulated to change the time or date. Unlike the French/English day wheel on my SKX007 diver, the SRP313 has options for a roman numeral or an English display (see the included video above for more on that). The included Seiko rubber strap is fine, if not a little too long for my uses (it is designed for diving). If you have had a Seiko dive strap in the past, this one will not change your opinion as it is still cheap, kinda rough, and fairly stiff. I would recommend either buying a model with a bracelet (SRP307K1, SRP309K1, SRP311K1), or simply sourcing a bracelet from one of the online communities or possibly checking eBay. Regardless of the model, the Monster is good on a leather or NATO strap, but excellent on its distinctive bracelet.

A quick note for those who have never owned a Monster: be very careful sizing the bracelet as it features pin-and-collar fittings and there is a tiny metal collar used to secure the pin within each link. You don’t want to lose that collar as a replacement will be a pain to source. I suggest sizing the bracelet over a large bowl or length of rolled tape to ensure none of the bits escape. As with the previous SKX Monsters, the SRP Monster range is well-priced. I was able to order the SRP313K1 seen here for $260 USD about a month ago, though in that time the average online price seems to have risen to roughly $290. The price will likely continue to fluctuate as more vendors begin to offer the SRP range. With the legacy SKX779 Black Monster (with bracelet) available for ~$200 online, the updated model is more expensive but you get more for the additional cash. If you plan on using the Monster as a weekend beater or a dedicated dive watch, then the SKX range is still a pretty good buy as the hand winding and hacking may not be worth the additional funds. Alternatively, if you want the best possible version of a notable Seiko design, the new SRP Monster range boasts an updated and more useful movement, along with a range of new color options.

The Monster is a great watch that exhibits a recognizable style, tough dive-ready qualities and a very appealing price point. I know that the original Black Monster was one of the first watches that ignited my love for dive watches and I have no doubt that the new SRP family will have the same effect for many future watch nerds. It is great to see Seiko increase the value in their entry level divers and I will keep my fingers tightly crossed with the hopes that Seiko offers the same 4R36 movement update to more of the SKX range, especially the SKX007 and 009.