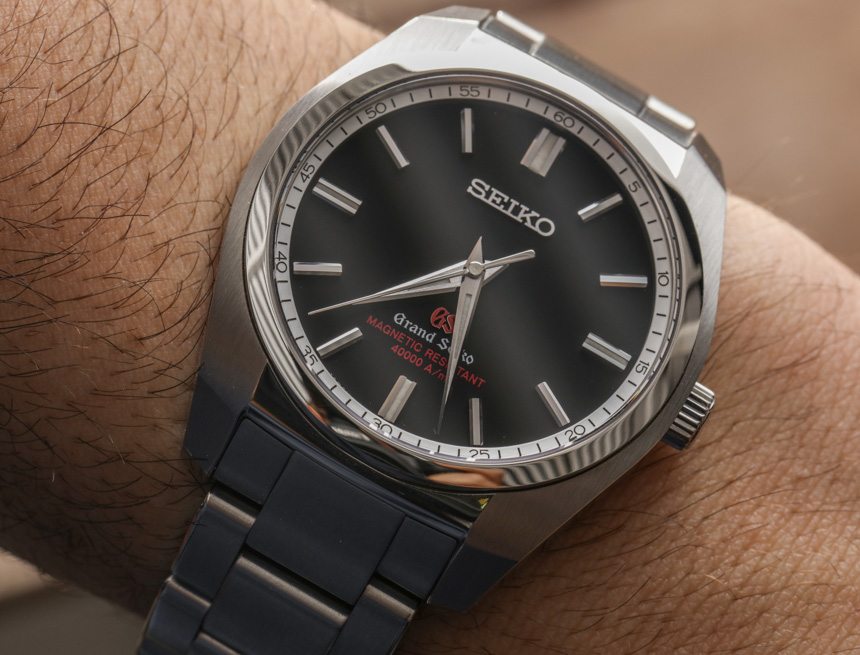 When the Grand Seiko SBGX089, SBGX091, and SBGX093 collection of watches was released in around 2012, the first of those models – the SBGX089 – was a limited edition of 500 pieces with a yellow hand and some different colors on the black dial. Seiko produced this “enthusiasts’ version” of its new “Milgauss homage” as a testament to classic “engineers watches,” like the Rolex Milgauss, IWC Ingeniuer, etc. Concurrently with these quartz models, Seiko also released the Grand Seiko SBGR077 and SBGR079 watches that I went hands-on with here that are similar-looking but contain mechanical movements. Today, I review the SBGX093 version of this “Grand Seiko Magnetic Resistant Quartz” watch.

High-end quartz love is still a minority passion among timepiece collectors, but I proudly include myself amongst those who have a soft spot for well-made watches with well-made quartz movements inside of them. Over the last few years, I have become increasingly interested in the best-made quartz timepieces, and I have wondered why. Even as I began my foray into high-end timepieces, I always retained a soft spot for quartz watches, I just shunned those that felt cheap inside and out. It is perhaps the advent of the smartwatch that has created a sort of nostalgia in me for good-quality “independent” quartz watches. A leader of such timepieces is easily anything with Seiko’s impeccable 9F family of quartz movements that are designed to go 50 years between service intervals and come in a sealed container within the watch. 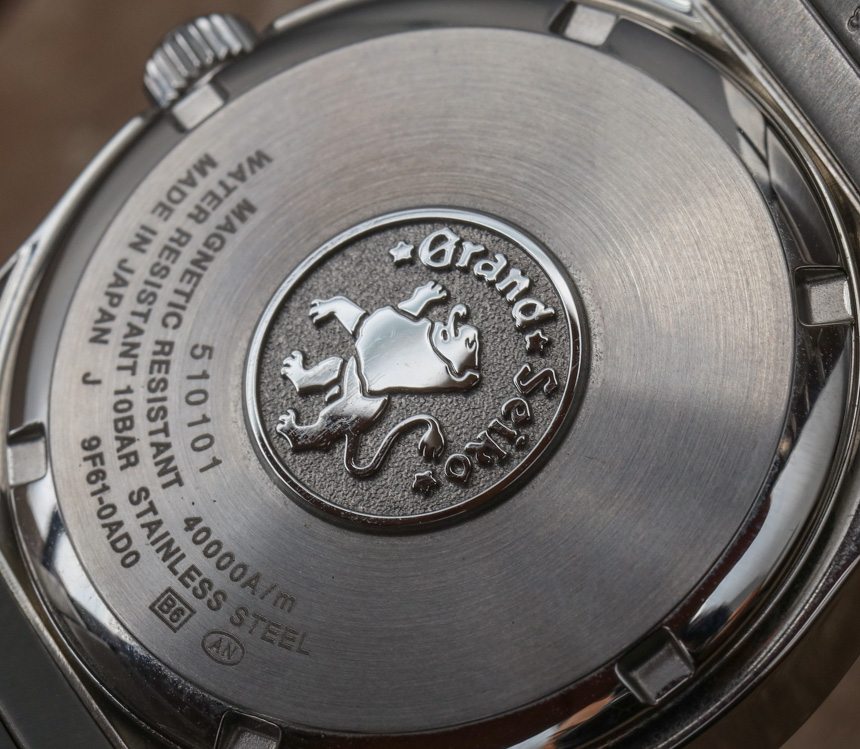 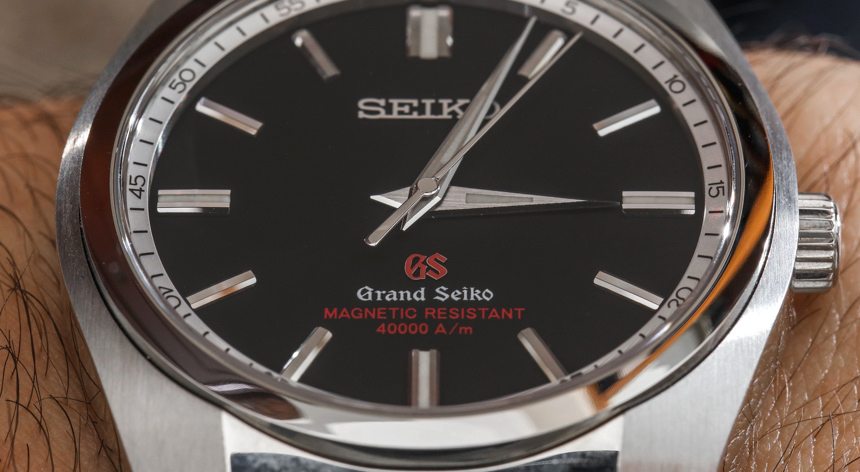 There is a lot to say about this deceptively simple time-only quartz movement. In fact, one reason the 9F family of Grand Seiko watches is so beloved is the fact that they lack anything extra on the dial – namely a date window. Watch nerds in general have lashed out against the date window lately, objecting to its added functionality as a less-than-convincing reason to destroy visual symmetry on the dial. The biggest ally of date windows on a watch is the oft referenced fact (at least historically) that, in a retail environment, watches with a date window complication sell better than watches without the date. With that said, watch makers need to carefully decide where specific watch models will sell better: in the “normal” retail environment, or among potentially more sophisticated collectors who obsess a bit more over design?

It is hard to deny that the lack of date window on the SBGX series of Grand Seiko watches helps the range look clean and elegant – often in a more superior way, even when compared to other Grand Seiko timepieces. This hybrid dressy/sporty SBGX093 manages to look classy and smoothly elegant as a Euro-style seductress from the Far East. 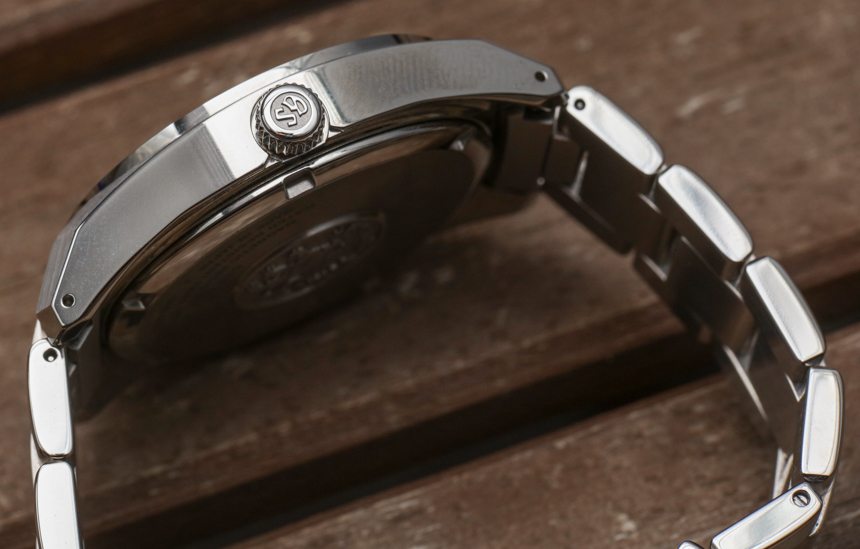 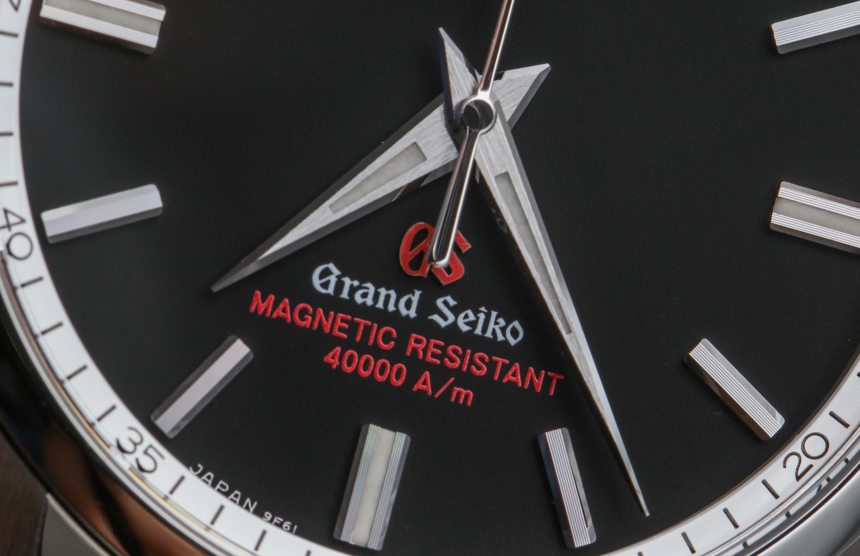 Given that I’ve already offered a long discussion of the Grand Seiko caliber 9F61 quartz movement in a previous review, I won’t offer the same discussion once again here. A little while ago, I reviewed the Grand Seiko Quartz Diver SBGX117 and SBGX115 watches here that also contain the 9F61 movements. In that article, I wax poetic about these hand-assembled “class-leading” quartz movements produced by Seiko’s “watch Meisters” in their clean Grand Seiko rooms. I will quickly highlight just a few of the main talking points related to these impressive quartz movements. 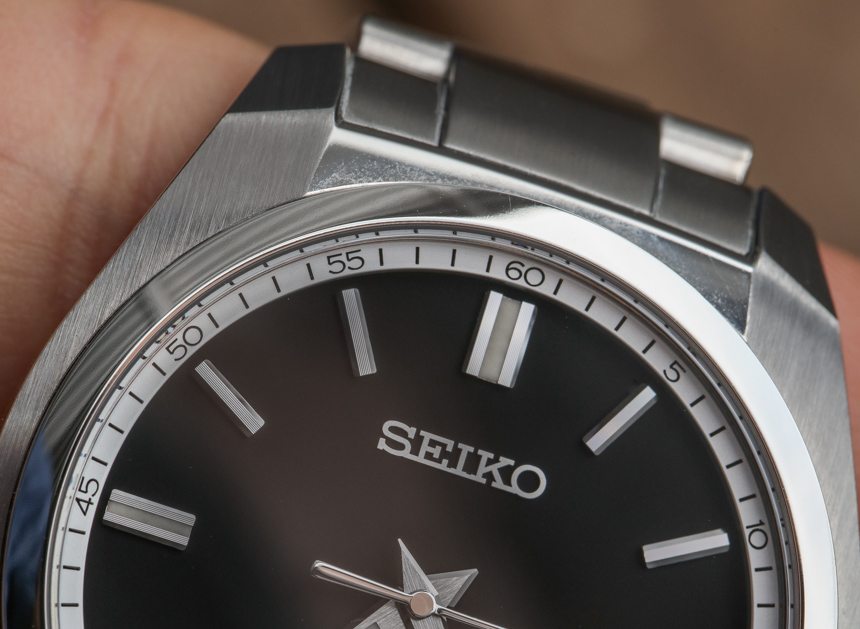 Unlike most standard quartz movements that are accurate to about 15 seconds per month, the 9F movements are accurate to 10 seconds per year. The movement is designed with extra torque so that larger, more impressive hands can be used. There is also a special system that makes sure the ticking seconds hand is utterly stable as it moves, which prevents that not-so-good-looking “wobble” you see from cheaper quartz movements. As I mentioned, the 9F movements are also designed to work a very long time between servicing and require a battery change each three years or so. 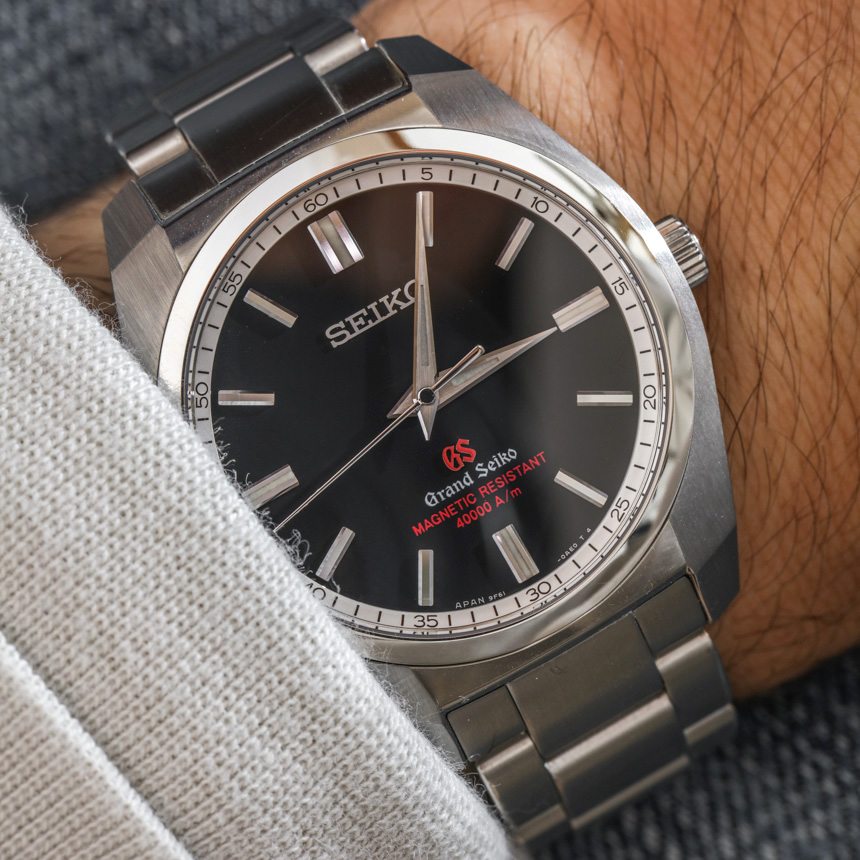 I typically don’t wear watches this size, but would I make an exception for this handsome timepiece that wears on the larger side (for being under 39mm wide) given its wide lug structures. The Grand Seiko SBGX093 case is in perfectly machined steel and given a mostly brushed finishing on the case and bracelet. With that said, there are plenty of attractive polished accents and angles which add to a sophisticated, high-end feel. 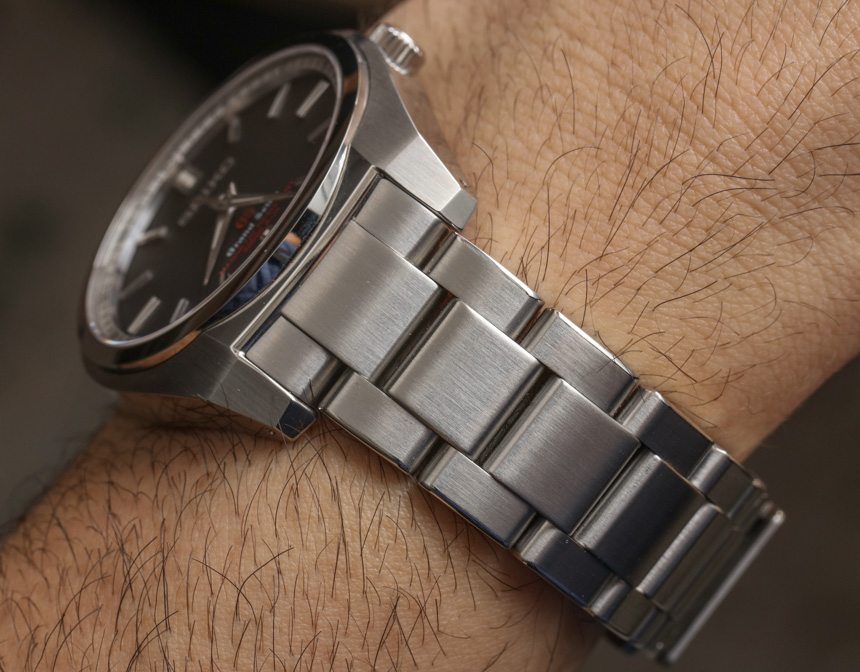 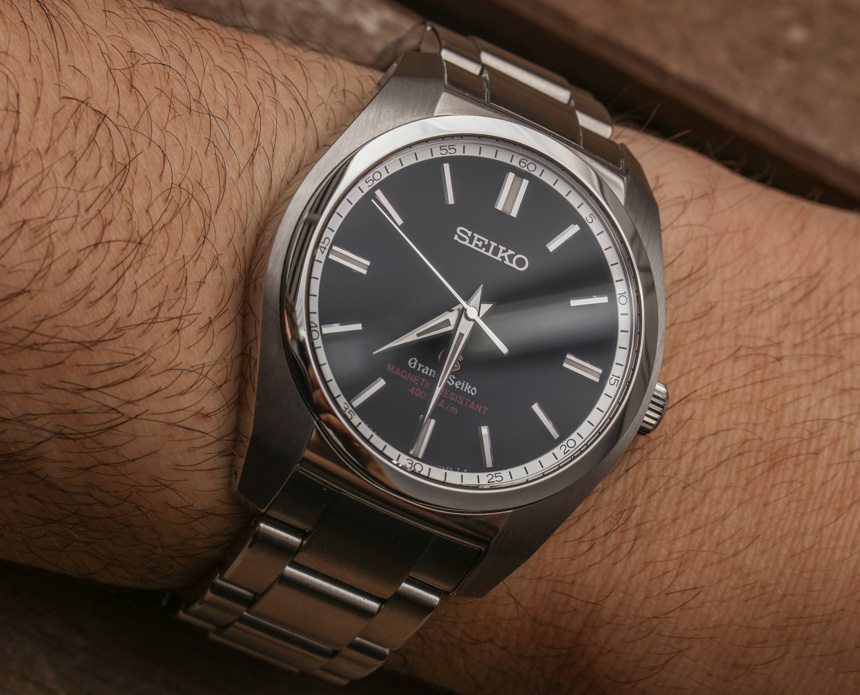 The case is 38.8mm wide and 10.7mm thick. The lug-to-lug distance is 47mm. I would not call this Grand Seiko SBGX093 Quartz a large watch, but it is a handsome watch and it somehow makes a case for itself in both formal and casual settings. I think part of the allure for me is the exceptionally handsome, refined, and legible dial. The polished hands and hour markers contrast nicely with the matte black dial that is actually a bit glossy. It has a deep sense of almost onyx black that seems to be a black hole-style face with text and indexes that are magically floating on its surface under an AR-coated sapphire crystal.