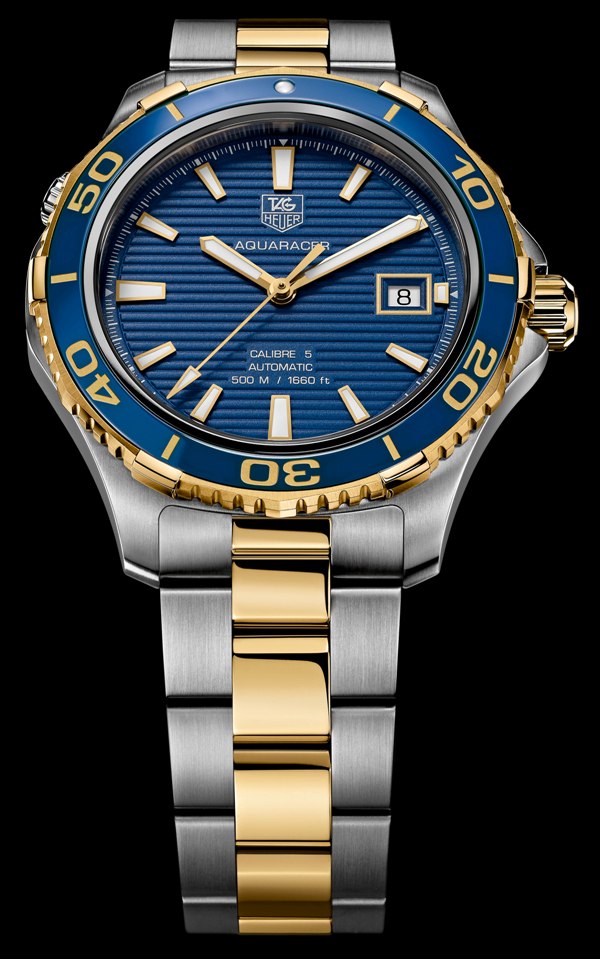 Tag Heuer has been producing the Aquaracer line of divers for the better part of 20 years and the range has always promoted models to both the enthusiast and mass market buyers. Over the course of its lifespan, the Aquaracer has transitioned from a sport diver to an appealing option for buyers looking for a nicely made entry point into the world of luxury divers. In 2009, Tag Heuer launched the Aquaracer 500m WAJ series, an aggressive and very sporty design that was definitely more diver than dress watch and was something of a callback to Heuer’s roots in commercial diving. This year, Tag Heuer has released the next generation of their 500m diver (reference WAK) and has dropped much of the styling cues that made the well-received 2009 WAJ range stand out from other Aquaracer models. These new ceramic bezel-clad 500m divers are much more reminiscent of the often overshadowed WAN series 300m divers, which are the dressy sub-a-likes in the previous generation of Tag Heuer divers. This new 500m Aquaracer is an odd update to the previous model. In what some would consider an act of sheer lunacy, Tag Heuer has downsized the new 500m WAK diver to 41mm compared with the 43mm case seen on the WAJ series (44mm on the chronograph versions). The distinctive rubberized bezel of the WAJ series has been swapped out for a svelte ceramic bezel that has the same look as the aluminum bezel fitted to the 300m WAN series. Power for the three-hand models will still be sourced via the Tag Heuer Calibre 5 which is either an ETA 2824 or a Sellita SW200 (these movements are essentially interchangeable). Having previously owned a Tag Heuer Aquaracer WAN2110 300m diver, I rather like this new model with its more subtle dial design, smaller case and the simple fact that its sapphire crystal is not adorned with a clops magnifier. The 300m WAN2110 is thin, simple and nicely made, essentially everything that a dress-diver buyer is looking for. What concerns me is the thought of having a Tag Heuer dress diver, but no sportier older brother. The WAN 300m makes more sense when you know, in the back of your mind, that while you chose the dressy option, the same company makes a tougher and more aggressive 500m model like 2009’s WAJ series. I am quite sure that the new WAK is a serious diver, what with its 500m water resistance and SMP-like HeV manual release at 10 o’clock on the case side, but the “last gen” 300m and 500m Aquaracers complimented each other nicely. Those used to the previous generation models are encouraged to “try before they buy” as the new Aquaracers are more a re-think than evolution on the existing collection. Regardless of previous models, the new 2012 Tag Heuer 500m WAK ceramic models will be available in versions including the black dial WAK2110, a blue/stainless WAK2111, a blue dial two-tone WAK2120, and my favorite the all black WAK2180 (seen above). With pricing starting at $2500 USD for the steel models, the all black model will sell for roughly $2800 with the two-tone model topping off the range around $3100 USD this new 500m Aquaracer carries essentially the same price tag as the 2009 versions. What isn’t clear is if this new 500m variant is meant to replace the 2009 series or if it is simply a supplemental addition to the Aquaracer family. I definitely like the looks of the new model and they have the features and price tag to make for a very successful version of Tag Heuer’s mass market diver.