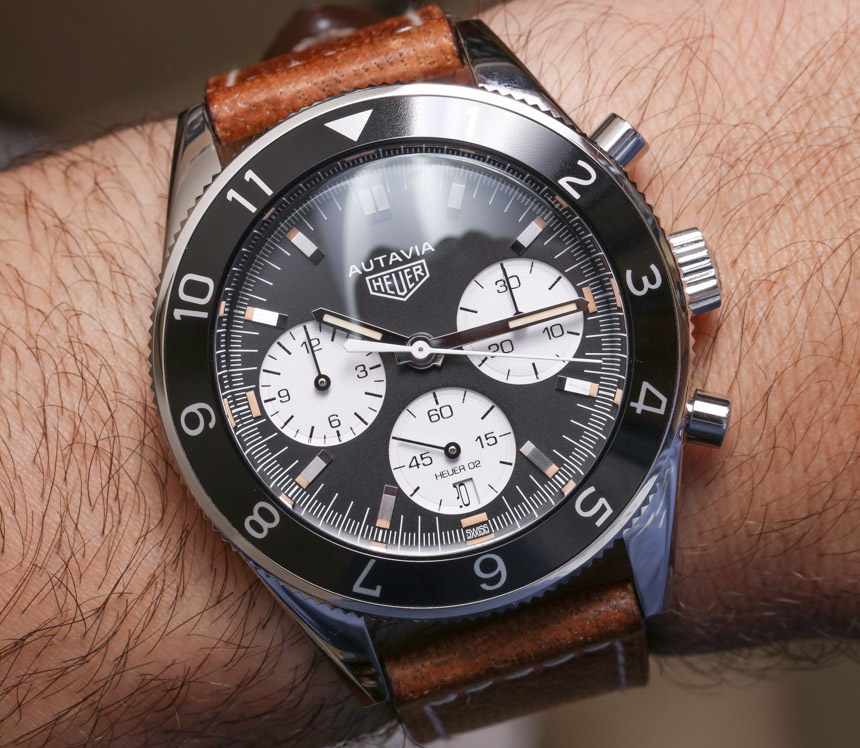 Ever since “The Autavia Cup” design campaign in March 2016, watch lovers have been excited about the re-issue of the TAG Heuer Autavia. The idea was to allow the public the opportunity to choose from a long list of historic Heuer Autavia watches that the TAG Heuer of today would produce and release just one year later. The summation of that is here, available for sale, and a rather special product if you understand it for what it is. I will say that while the TAG Heuer Heritage Autavia Calibre Heuer 02 is undeniably lovely, it takes a certain perspective of understanding to really appreciate what TAG Heuer did correctly here.

Prior to discussing the TAG Heuer Heritage Caliber Heuer 02 Automatic Chronograph (oddly, even though ‘Autavia’ is on the dial of the watch, it doesn’t seem to technically be the name of the watch as of writing on the TAG Heuer website), I want to talk about recent background of the TAG Heuer brand and what the watch market seems to be interested in. The last decade has been a rocky time at TAG Heuer with lots of leadership changes, rapid fluctuations in the average price point of products, sometimes very large and diverse types of products, and an internal struggle of current objective priorities. Much of that is thought to now be resolved under the leadership of Jean-Claude Biver—modern hero of the watch industry. As the guy responsible for running the watch division of LVMH (which includes TAG Heuer, Zenith, and Hublot, as well as Louis Vuitton, Bulgari, and Dior), he is the name in charge at TAG Heuer. Jean-Claude has proven to be very open-minded as well as grand in his vision toward rebuilding the TAG Heuer brand. One of the things that Jean-Claude seemingly identified is that while TAG Heuer had some impressive offerings over the last decade, few of their products felt particularly timeless or classy. Knowingly or not, Biver’s mission seemed to be one that included returning TAG Heuer to being a design icon. Part of that is intelligently leveraging everything the brand has done until now. The best way to do that? Look at what the brand’s collectors are pining over. Particularly interesting to many serious watch collectors are driving-themed chronographs from the 1960s and 1970s. Who was making a lot of those? Heuer of course. Thus, TAG Heuer today “owns” the history of making these old chronographs, which are today coveted by uber fans. Does it make sense to make those same designs again for today? This very question has been one of the most popular in the contemporary watch industry, but it can be answered in the affirmative in a surprisingly large number of ways. Sometimes rebuilding something old works out to being an amazing idea, and sometimes the idea is dead before it left the factory. In answering the question of how to make history relevant for today, TAG Heuer has never answered better than with the Autavia Calibre Heuer 02. I’ll attempt to explain my reasoning for this below. I will however offer the summary of my argument now. I feel that the combination of using a beautiful, effective, and classic design mixed with a thoroughly modern and competent construction that’s properly packaged for today’s consumers is the formula TAG Heuer followed for success here. The reality is that the Autavia is in no way a “vintage” watch outside of its aesthetic. In all respects this is a totally “today” machine. I’m going to invent a new term for watches like this and that is a watch wearing “vintage camouflage.” You see, prior to the Autavia being around (again), TAG Heuer had this amazing movement called the Calibre 1969 and later as the CH 80. For a series of reasons when Jean-Claude Biver came aboard he needed to mothball the CH 80 project until further notice. The movement was made and designed in-house, and probably the best modern chronograph the brand has made (which is saying a lot). People thought Biver killed it. I knew better. Biver was just waiting for the right moment to make the best use of the movement, which in many respects was too similar in price-point to the also in-house made Calibre 1887. The CH 80 was later renamed for a third time to the Calibre Heuer 01, and given a new visual look in order to make it feel even more modern. Look through the caseback of the Heritage Autavia and you won’t see something that looks even remotely old. Rather, you’ll see one of the most modern looking Swiss mechanical movements available at this price, though it still has hallmarks of industry tradition such as decoration on the movement bridges in the form of Geneva stripes. The exposed column wheel for the chronograph is painted in a sport red—just for fun. The Calibre Heuer 02 has a vertical clutch for the chronograph which gives it a very satisfying and precise feel when operating the pushers. This feels likely better than most of the original Heuer Autavia Chronographs from years ago. The light-colored subdials are rubrics of legibility thanks to the slightly recessed matte light silver dials and high contrast black markers and hands. The relative availability of white space makes the otherwise tiny spaces feel bigger and thus easy to read. Such obscure lessons in legibility have long since been lost to most modern wrist watch dial designs. The only clues for these lessons are in studying old designs. While everything has its quirks, this reference CBE2110.FC8226 is an A-grade mosaic of many good design practices when it comes to precise instrument watches that our style-minded luxury designers aren’t always thinking about today. TAG Heuer is borrowing intellectual property from itself for this project, and I applaud them for making good use of it. Let me be sure to remind you that this is by no means TAG Heuer’s first attempt at making a re-release of a vintage watch. In fact, TAG Heuer was re-releasing vintage watches since before it was popular back in the 1990s. TAG Heuer doesn’t always communicate about it, but the brand has a lot of trailblazing in its DNA. The Autavia isn’t about trailblazing, but rather proof that TAG Heuer isn’t just a watch maker, but capable of producing design icons. In that sense the Autavia is almost a statement to the rest of the high-end watch industry from TAG Heuer saying “we own this look,” implying that no “respectable brand” can appropriate it for their upcoming watches. At just over $5,000, the Heritage Autavia Calibre Heuer 02 is a fair amount of watch. Value can be found everywhere from the impressive fit and finish to the detailed dial and the awesome movement. Provided it was popular enough, this is the type of timepiece which in a hot buying environment could go for over the retail price. TAG has a sexy lady on their hands, and it will be up to them to keep this type of experience product consistently so polished. I think the reality here is that TAG Heuer really took a lot of time to make sure this product lived up to the hype. I don’t think they are going to let anyone down. In fact, across the board TAG Heuer’s product is getting better and better. Not only that, but TAG Heuer is successfully appealing to a wide variety of consumer demographics who typically don’t have much in common with one another. For example, the TAG Heuer of today makes this Heritage Autavia, the Connected Modular smartwatch, the skeletonzied Carrera Heuer 01, a tourbillon, attractive ladies watches, and a lot more. The point is that TAG Heuer managed to find the space to carve out yet another niche for vintage-style modern tool watches. The least vintage thing about the Autavia is the case size. While it is the perfect size for me at 42mm wide and about 17mm thick, actual vintage watches were typically much smaller (though Heuer has some bigger pieces). The reason this is important to mention is that vintage watch proportions don’t always translate when when ballooned. That isn’t an issue here because the Autavia appears to have been designed from the ground up as something new—instead of just something that follows visual themes found in older designs.