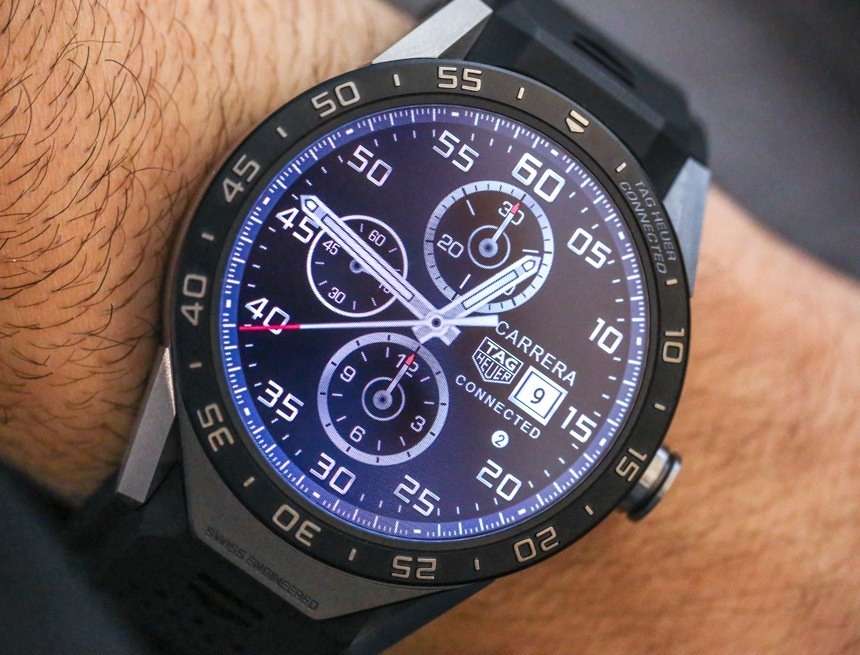 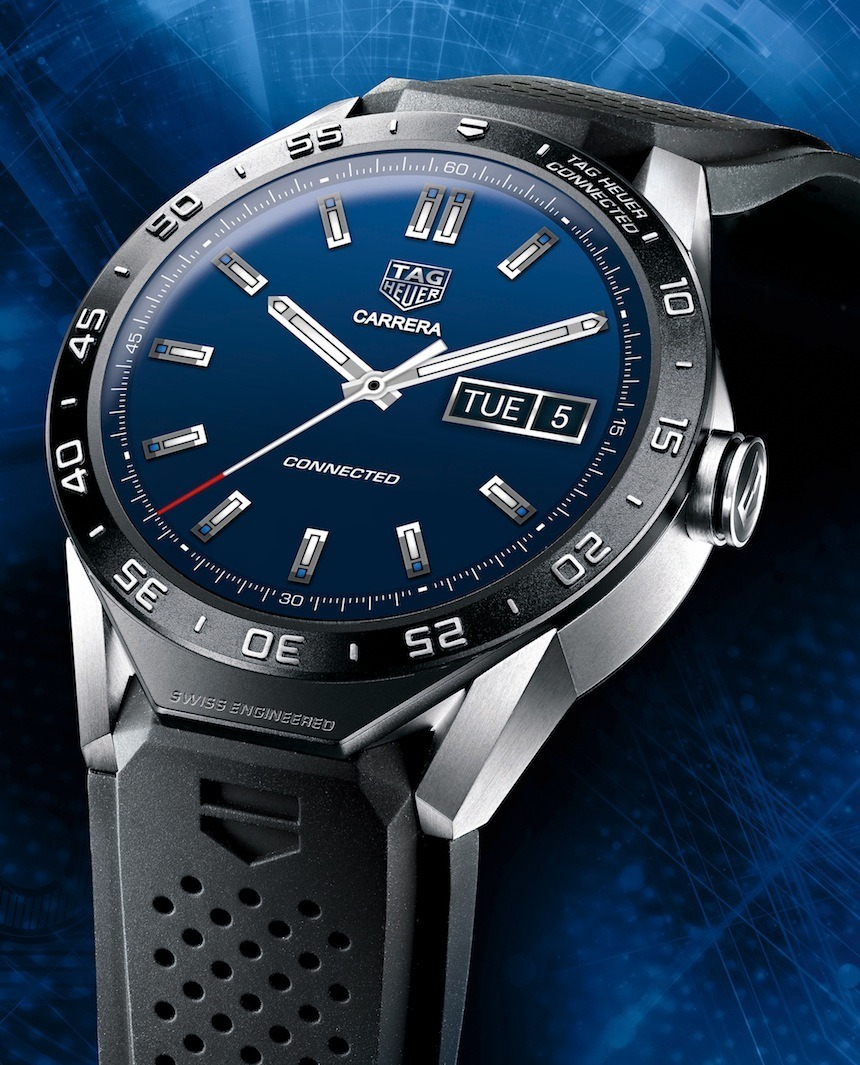 “Silicon Valley meets Switzerland,” as Jean-Claude Biver has so eloquently put it, with TAG Heuer officially launching its long-awaited TAG Heuer Connected smart watch in New York City today. We are reporting live from the event to bring you all details, including pricing, design, functionality, battery life, availability, and more. 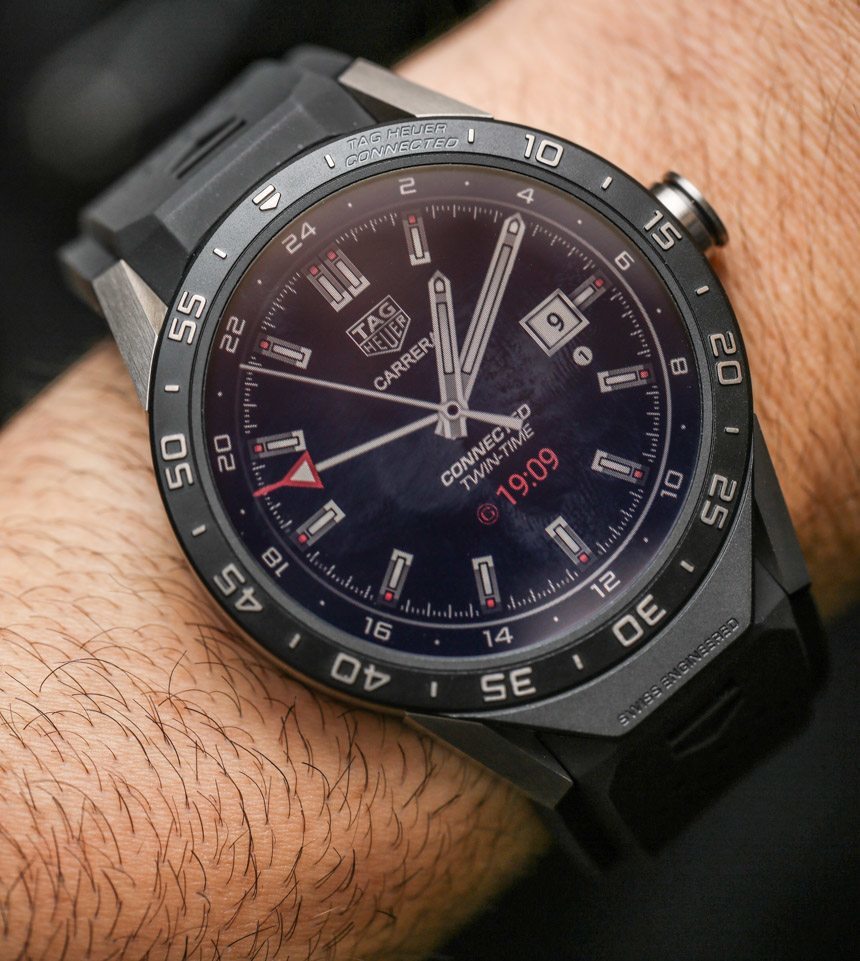 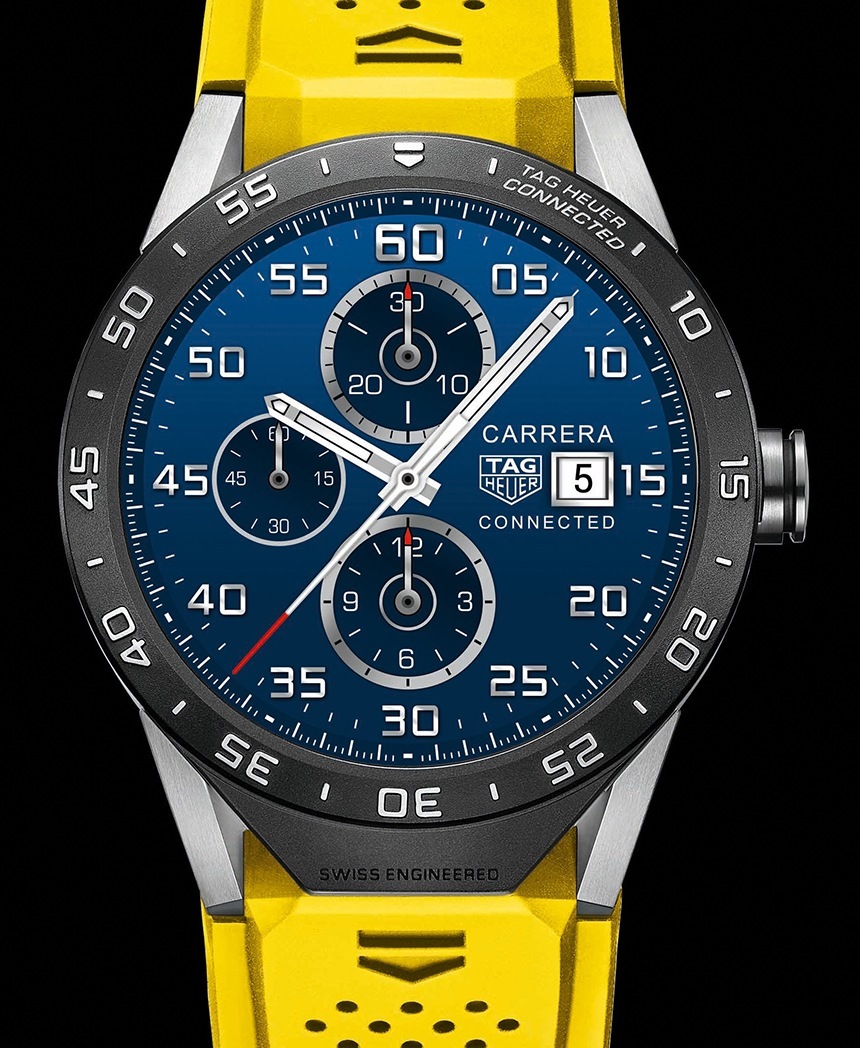 It is no secret that for a number of years now, the smart watch has been Damocles’ sword, swinging above the heads of Swiss watchmaking leaders. And while the majority of key Swiss players in the industry had no choice but to technically ignore the ceaselessly improving smart watch (since most could not afford to put up a fight), TAG Heuer went on the offensive and teamed up with technological giants Intel and Google, a partnership they announced in March at Baselworld 2015, to create the luxurious, Swiss alternative to the Apple Watch and the rest of the competition. 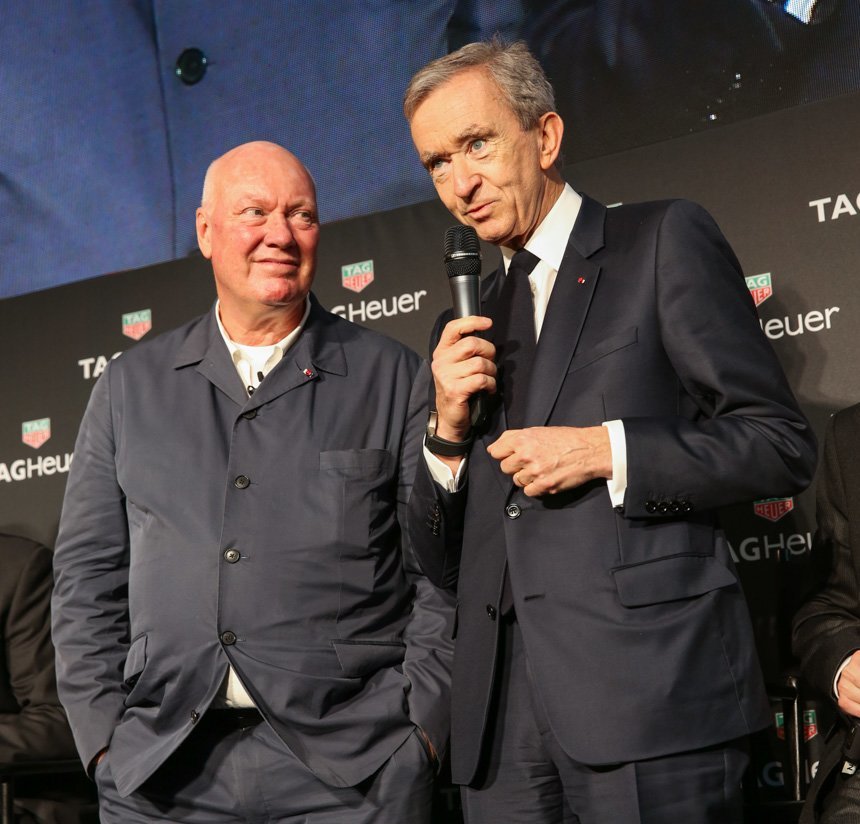 The key questions we have to answer include how well this first generation version of the TAG Heuer smartwatch will work, how it will affect the brand’s recognition, and where it will lead us as far as the future (and the realities) of the Swiss smart watch is concerned. 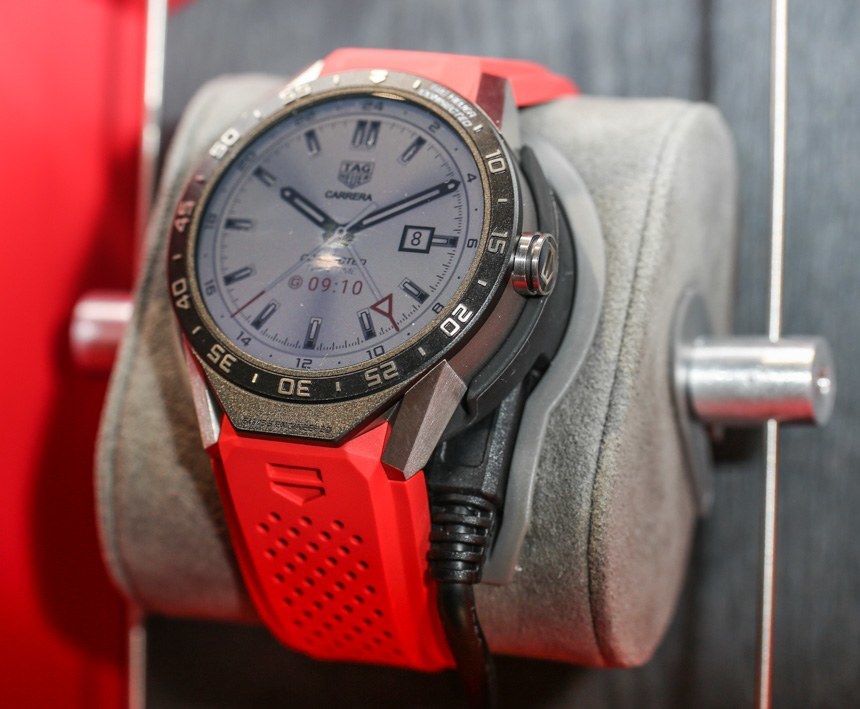 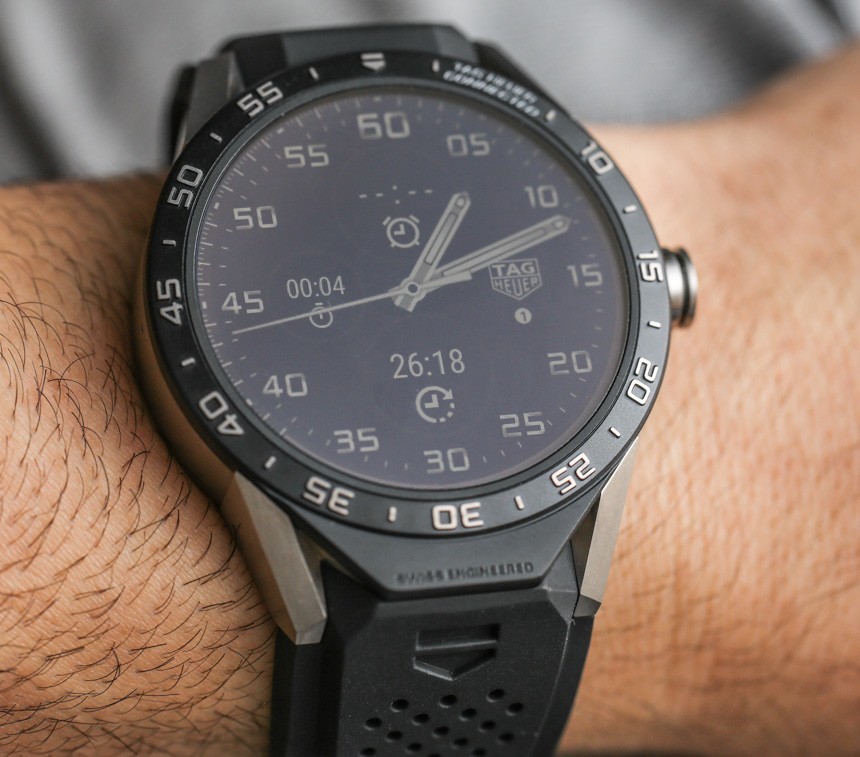 A Collaboration Between TAG Heuer, Google, And Intel

As head of LVMH luxury group’s watch department and CEO of TAG Heuer, Jean-Claude Biver explained that at TAG, it would have proven to be impossible – and both financially and technically catastrophic – to try and design and/or make their own operating systems or processor chips. So what they have done instead is harness TAG Heuer’s powerful brand name and its vast expertise in crafting luxury timepieces in larger quantities, and turned to Google and Intel – two extremely powerful and capable companies that surely need no introduction – to help them out with those uncharted territories. 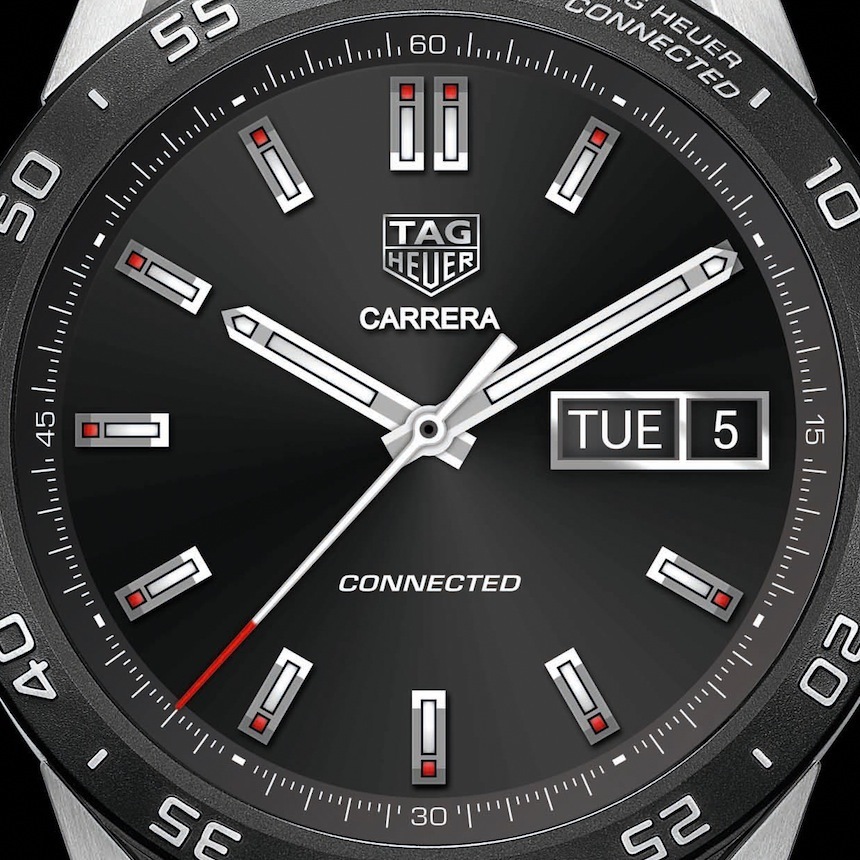 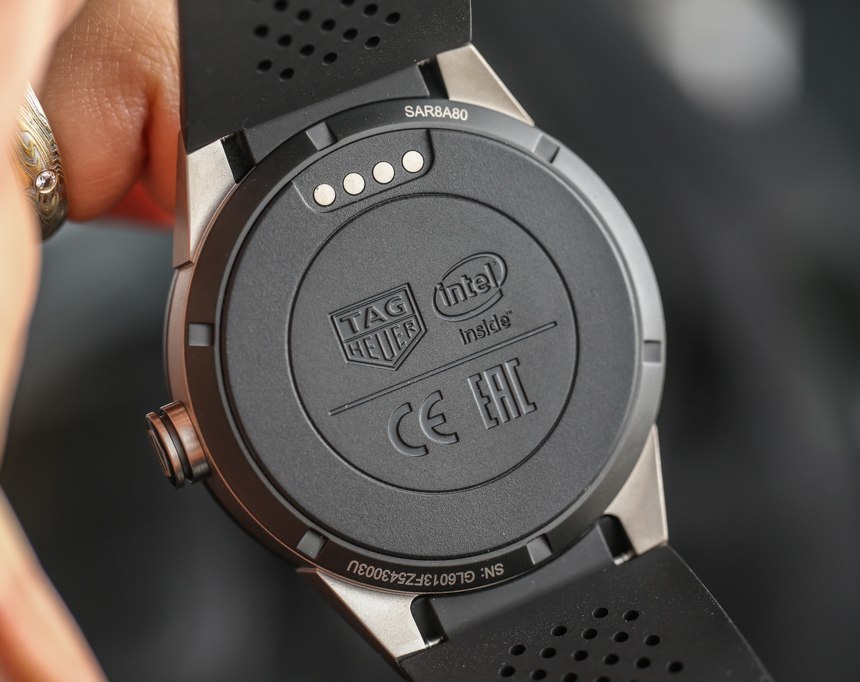 Still, it took almost 9 months for TAG Heuer to get from that Baselworld announcement (which got everyone excited until we learned there was no actual watch to show at the time) to finally releasing the finished product just today: the TAG Heuer Connected watch is here.

As Biver said, “It would be a shame if a connected watch looked like one [a connected device].” So the order was given and duly followed by TAG Heuer and its partners’ engineers to create a watch that looks as close to its mechanical counterparts as possible. Hence, the case of the TAG Heuer Connected watch is remarkably similar to that of the TAG Heuer Carrera Heuer 01 (reviewed here). 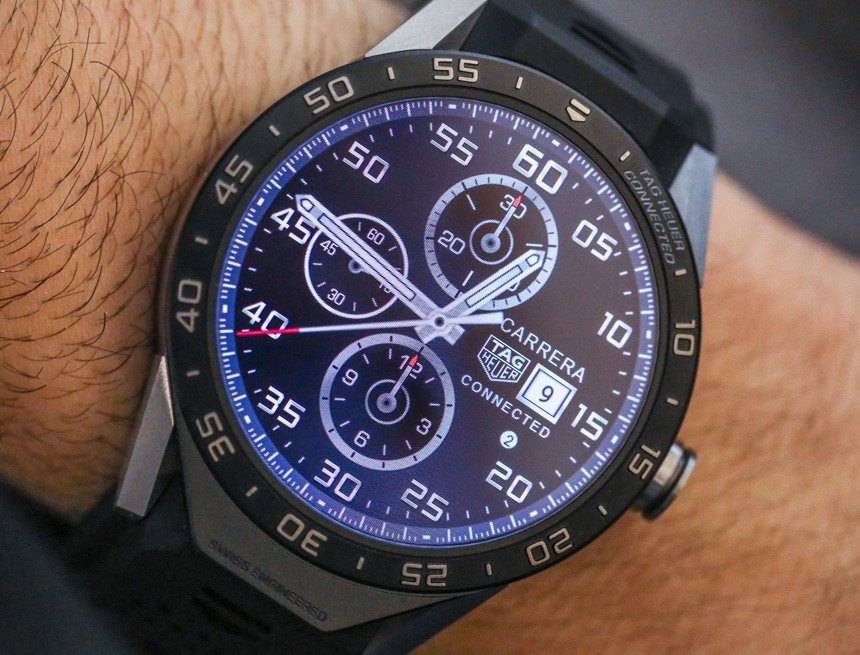 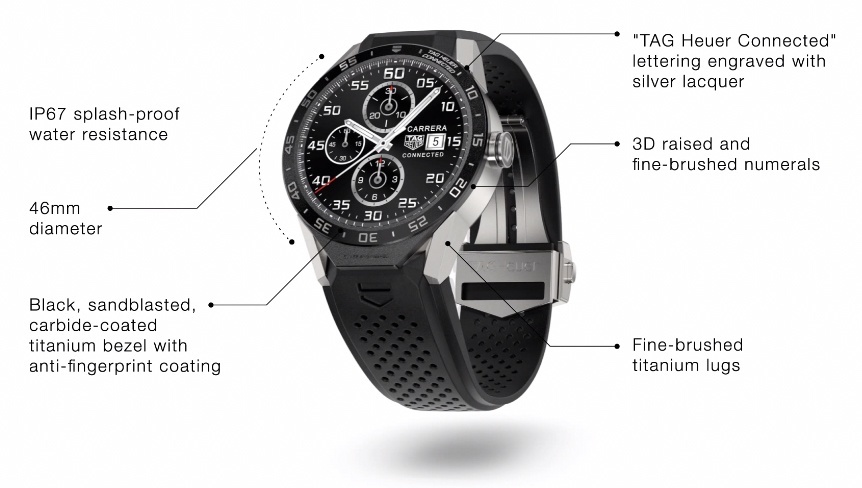 At 46mm wide, the case of the TAG Heuer Connected watch has a case (that is case band, case-back, and lugs) made from Grade 2 titanium, and a black, sandblasted, carbide-coated titanium bezel with anti-fingerprint coating. The use of titanium should keep the substantially sized timepiece relatively light on the wrist – it actually weighs just 81 grams on the rubber strap. The case will sport an IP67 water resistance rating that guarantees the watch to remain functional up to a depth of one meter for an uninterrupted time period of 30 minutes. The TAG Heuer Connected watch will come on one of 7 different rubber strap options, which are black, red, blue, white, orange, green, and yellow – additional ones can be purchased separately.

TAG Heuer has developed three digital watch faces that will come with the TAG Heuer Connected watch. Featuring the design codes of the Carrera collection, these are: a chronograph dial, a 3-hand dial, and a GMT dial, all coming with a date display and in three colors (black, deep blue, or pearl white). TAG even designed the (virtual) hands to cast a shadow on the (virtual) dial, and there even is a sunburst effect mimicking how the light plays on a physical dial.

More importantly: the dial of the TAG Heuer Connected watch remains always ON, even in “ambient energy saving mode,” so as to keep the hands and indexes legible – no need to flick your wrist or tap the screen to make the time show up on the display.

So, how does the perfectly round, 1.5-inch-wide, sapphire crystal-covered, 360×360-pixel touch screen work exactly? The TAG Heuer Connected runs Google’s Android Wear operating system on an Intel Atom processor, which allows the watch to be synced to a phone running either Android 4.3 or iOS 8.2 (or any newer versions). 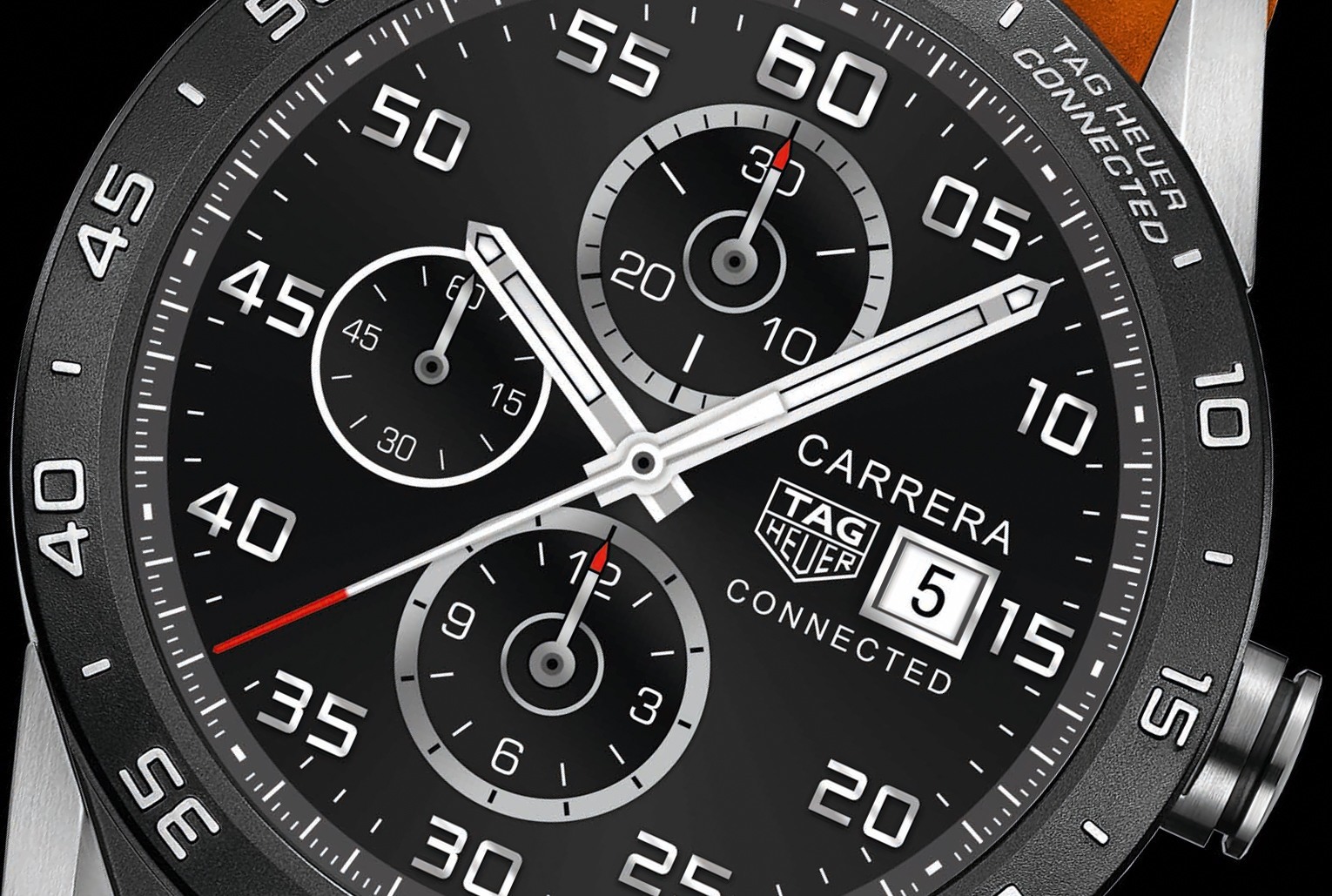 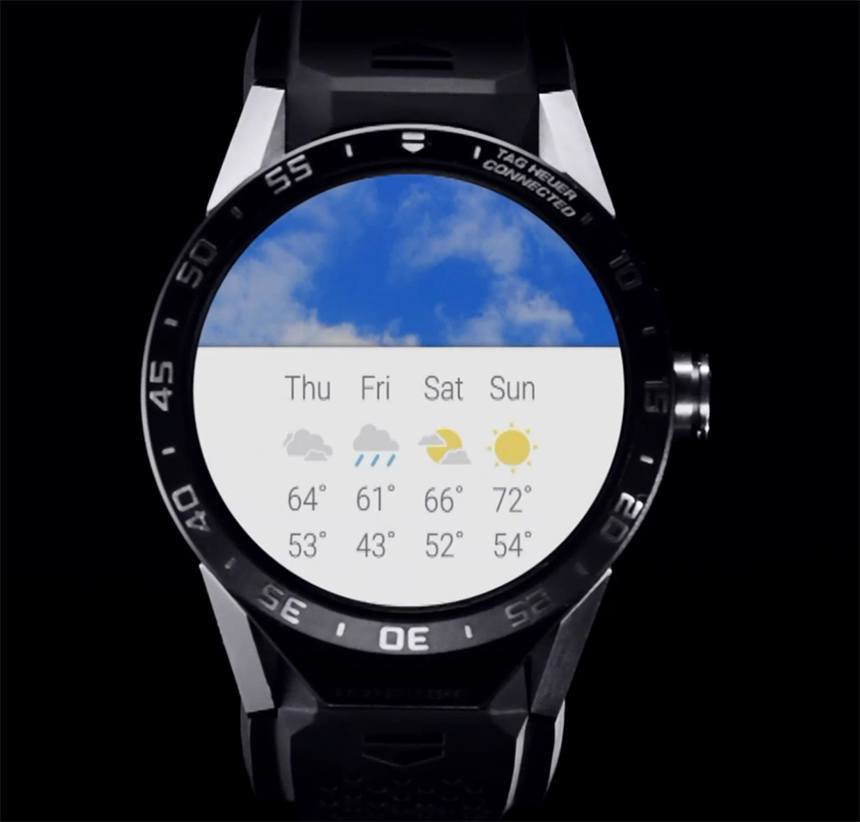 The dial and hands remain stubbornly displayed while the most pertinent information from partner applications is displayed inside the three counters on the chronograph dial at the 12-6-9 o’clock positions. What you have to do is touch the counter in question to open and interact with the respective application in full-screen mode – this is done in an effort to help the “watch element” prevail over other indications, unless you decidedly want to highlight some other app. 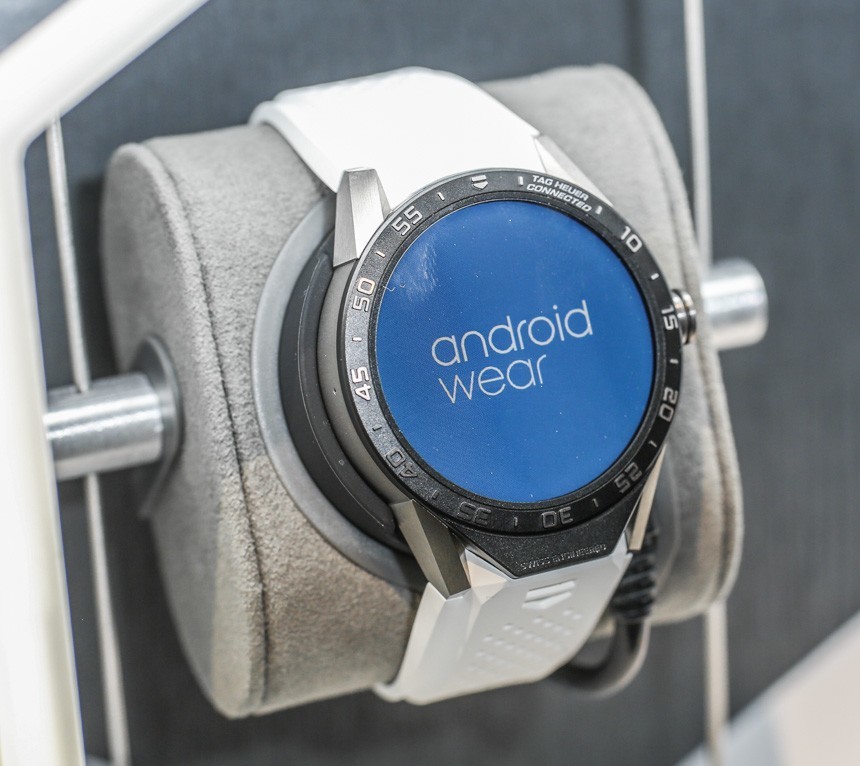 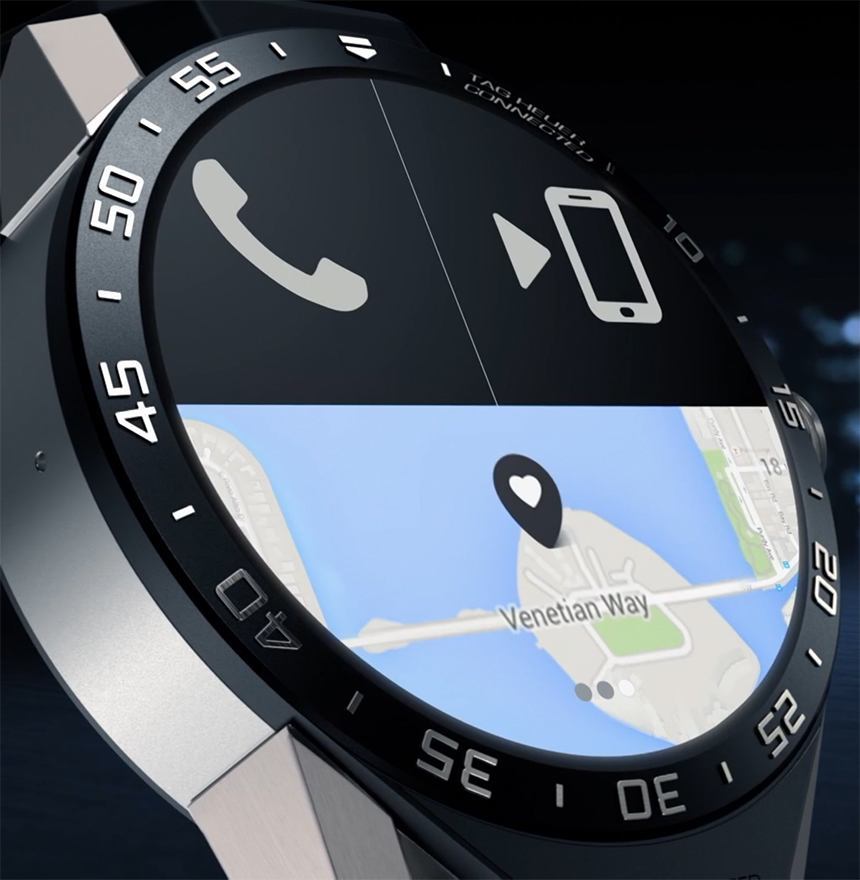 Along with standard apps such as timer, alarm, and chronograph, the apps customized for TAG Heuer and available on an exclusive basis will be Insiders (lifestyle), GolfShot Pro, RaceChrono Pro (motor racing), and Viewranger (navigation), offered with free subscriptions. 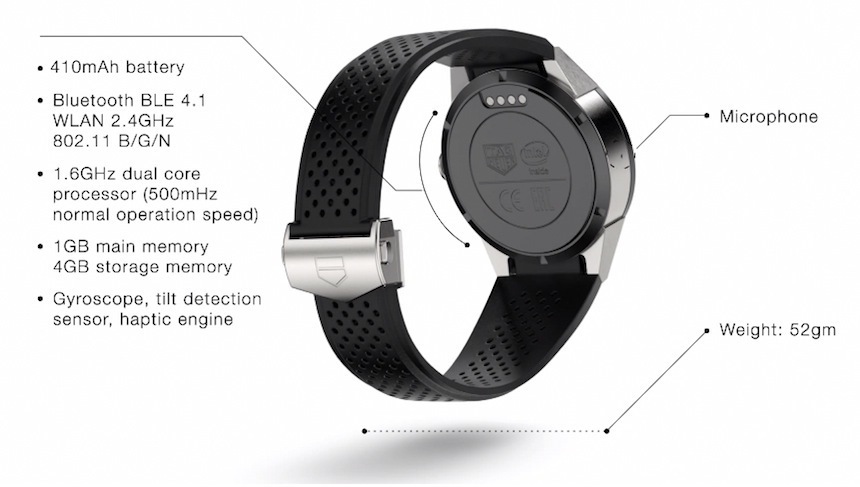