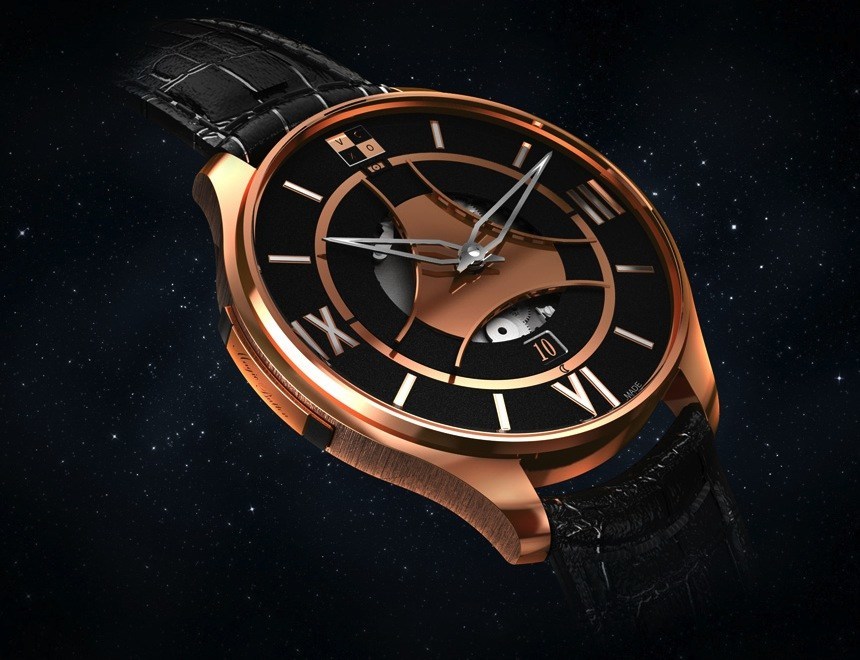 The VCXO Ox One is a bold new concept from a young Geneva-based brand which offers a rather unique bond between GPS technology and mechanical movements. While the accuracy of GPS-set quartz watches is universally acknowledged, most watch enthusiasts will agree mechanical watches tend to have more soul, thanks to their “beating heart,” when the same can scarcely be said about electronic watches. With the Ox One, VCXO tries to achieve the best of both worlds by offering a watch with an automatic mechanical movement equipped with a GPS module on top, allowing for the synchronization of the time with data received through GPS technology. That sounds like some proper space-age technology, so let’s discover how it works exactly. Serving as the foundation of the watch is a TT-738 automatic movement from Swiss Technotime SA, an independent supplier that produces complete movements, movement modules and even balance springs. The movement runs at 4 Hertz (28,800 beats per hour) and packs a full 5-day power reserve thanks to its twin-barrel construction. It couples these impressive feats with COSC certified chronometer accuracy, as well as an instantaneously changing date. Sounds very promising, but how does GPS synchronization come into play?

The key to that is set into the side of the case at the 9 o’clock position and is quite straight-forwardly called the “Magic Button.” I just love how it could have said something like “Adjust time,” “GPS Sync” or anything else relatively closely linked to its actual function; but no, it is the “Magic Button.” I guess that indicates how much effort goes into these inventions and just how fond the inventor grows of his work in the process. At times there is good reason for that, and the concept behind the Ox One is no exception.

In practice, by pressing this button, the wearer activates an integrated GPS-chip that is responsible for receiving data from satellites, comprising the exact time that corresponds with the watch’s momentary position. Once that data has been compiled, a small motor linked to this chip will set the hour and minute hands to the accurate time. To make things even more complicated—and perhaps more simple from the user’s perspective—the Ox One does away with the ordinary winding crown as we know it. The image above gives us a look at the other side of the watch. Immediately noticeable is the presence of a button, residing exactly where the crown is usually located. This button serves no other purpose then winding the automatic movement, and as such, it cannot be used to set the time. Our first thought upon seeing this rather unusual feature concerned the setting of the time when GPS reception is not available—like at a time when the watch is used indoors, at a location where there is no reception, or in an unlikely post-apocalyptic scenario.

In our conversation with the brand’s founder, Adrian Pedrozo, his response to our concerns was that the GPS chip is designed to keep track of the time even if the automatic movement runs out of its 120 hours of power reserve. Therefore, once its owner breathes new life into the mechanical movement, upon pressing the “Magic Button” the time will be set to the exact time that is in accordance with the last known location’s setting, even if there is no GPS-data received. He also told us that the motors setting the hands are powered by a battery which in turn is charged by one of the two barrels of the movement. How exactly that works is something the brand is not ready to share with the public before the actual launch of the watch. Now that we are familiar with the basics of how the mechanical movement and the GPS chip function together, the key question is how successfully can all this technology be packed into a watch case that remains actually wearable? Well, the VCXO Ox One will come in a 46 millimeters wide and just 9 millimeters thick case, keeping the watch at the wearable side of things, especially once its complicated movement and the lack of a protruding crown is taken into consideration. It is said to be water resistant to 3 atmospheres, the equivalent of 30 meters, which is acceptable for a watch with such technological advancements and more elegant than sporty looks.

In conclusion, the VCXO Ox One promises to be a genuinely interesting concept that strives to successfully merge the two opposing worlds of mechanical and electronic watches. Unfortunately, it will be at least 6 months from now before we see the first batch of watches delivered, forcing us to wait a little longer before we get to press that “Magic Button” for the first time. The VCXO Ox One will be available in non-limited editions executed in stainless steel and black ceramic, as well as a numbered run of 25 pieces in pink gold with pre-order prices coming in at $9,150, $11,200 and $41,150 respectively. vcxo-watches.com