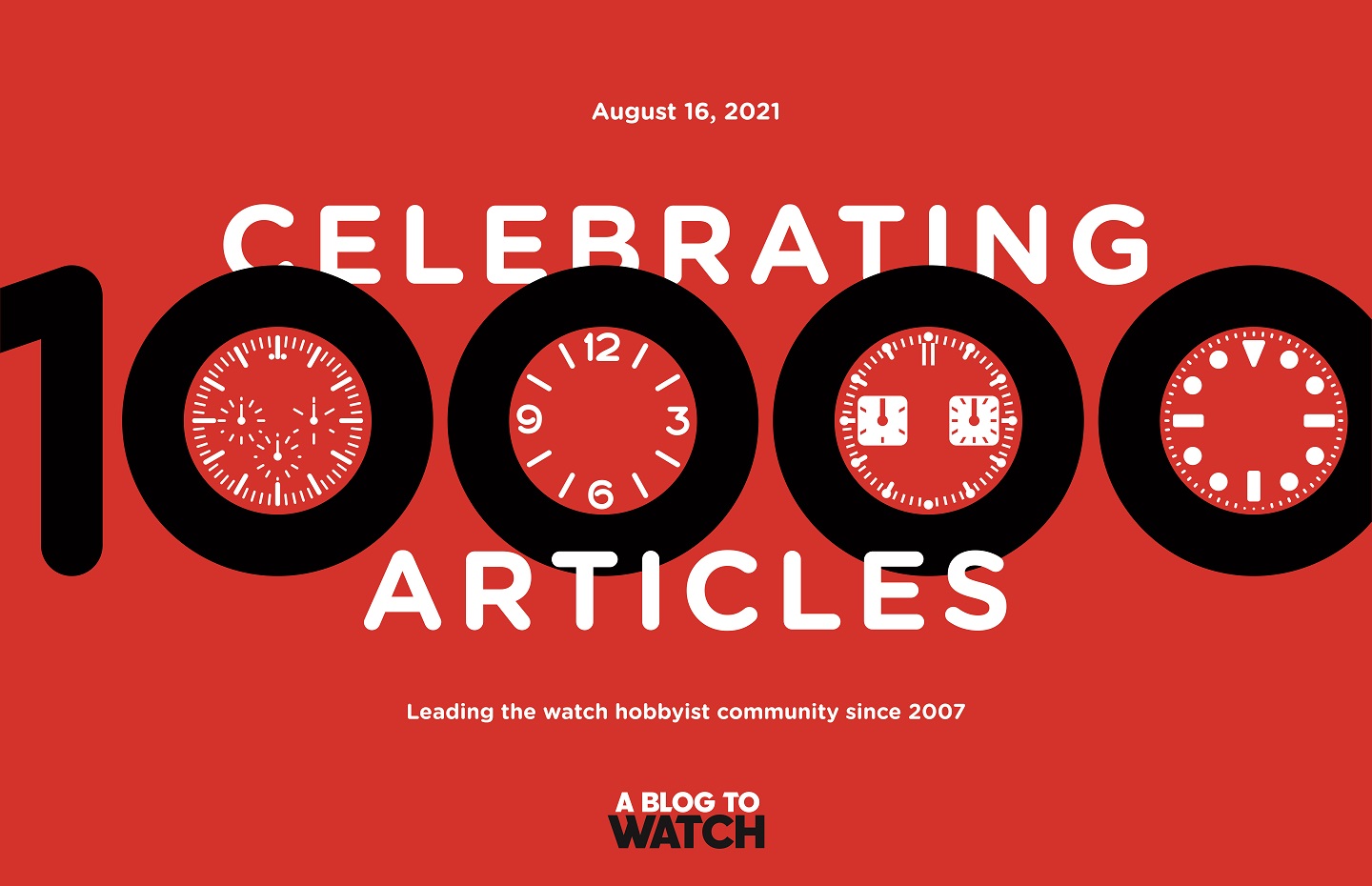 10,000 aBlogtoWatch Articles Published & The Power Of The Watch Community

aBlogtoWatch recently published its 10,000th article. I’d like to take a moment to celebrate this important accomplishment for the timepiece enthusiast community. Journalist Malcolm Gladwell popularized the concept that it takes 10,000 hours to achieve mastery over a concept or activity. It has taken many times more than 10,000 hours to share 10,000 stories about watches, the people who make them, the people who love them, and the industry that profits from them. I offer my sincere thanks to the global wristwatch community for helping to make aBlogtoWatch a source of mastery for our collective hobbies and professions. aBlogtoWatch hasn’t just participated in the watch community, however — it has also been a crucial part of developing it. What I have come to recognize on the occasion of this publishing milestone is how many more watch lovers there are in the world because of the 10,000 articles on timepiece appreciation we have published thus far.

The very first aBlogtoWatch article was published back in September of 2007. It was my goal to publish at least one article per day, and I believe we have done so for nearly 15 years now. 10,000 articles is a lot of stories and news about wristwatches and the industry that makes them. The world has changed, and so have I since aBlogtoWatch (originally aBlogtoRead) started. What hasn’t changed is why I write about watches, and why I like them — and I think that goes for everyone who has been part of the aBlogtoWatch team.

A lot of today’s watch media professionals and amateurs have been exposed to and inspired by my work and that of the larger aBlogtoWatch team. I’ve been accused of having the most famous wrist on the Internet, and I’ve been called an arrogant American know-it-all by folks to come from entirely different cultural backgrounds than me. And then, I’ve also been told how refreshing it is that I have remained remarkably faithful to the same Ariel Adams who started the website in 2007. Recently, I’ve also heard people say that aBlogtoWatch is, again, among the very few places where authentic or critical examinations of new watch products can be found — something the consumer community desperately needs. I’ve been asked by hundreds of people how they can do work like me or be part of the aBlogtoWatch team, and I’ve been recognized and complimented for aBlogtoWatch’s work all over the world. And this has all happened because we never looked back, and we never looked sideways at what others are doing. We just kept chasing and covering watches for the people around the world who are as interested in them as we are.

If asked to defend the contribution aBlogtoWatch has made to the wristwatch community, I would make two primary points. I would first point out that aBlogtoWatch is responsible for the creation of many new watch fans. Back around 2010, I recall thinking to myself, “I’m happy if I can help spawn one new wristwatch enthusiast per day — one new soul whom I would have infinite things to talk about with if I found myself sitting with them at a meal someday.” And secondly, that strategy essentially remains the same today. aBlogtoWatch is a sort of shrine for a mutual interest in talking about and wearing watches. It has never been about any particular type of watch, but rather about fostering a sense of community for those people who collectively take interest in the same quirky hobby.

If not for 10,000 articles reaching many millions of people over the last nearly 15 years, how many fewer watch conversations among fans would there have been? How many fewer instances of a novice stumbling onto a review while searching on Google would there have been? How many watches would have never been purchased or desired because there was no article to review or debut them? aBlogtoWatch has created countless watch lovers, and the watch industry has benefited greatly from the value of all the new people we have helped welcome into this space. How many more fresh-faced watch hobbyists will there be as a result of future aBlogtoWatch articles?

The luxury watch industry of the future needs communities like aBlogtoWatch more than ever. Gone are the days when people are born in a world where timepieces worn for utility are ubiquitous. Tomorrow’s watch enthusiasts will only enter the hobby if timepieces are somehow formally introduced to them as a pursuit. Watch hobbyist media only helps the watch industry because it helps attract and create people who might never have before known about or wanted a wristwatch. Without aBlogtoWatch sharing a story about a cool new watch, people will not learn that story and might not have an opportunity to get interested in that watch in the first place. The ability for aBlogtoWatch to curate content and introduce new watches to a respected community continues to be unmatched by purely social media and other alternative digital media platforms. Long live the hobbyist magazine — or whatever form it may take.

Enough on what aBlogtoWatch has contributed to the watch enthusiast industry and community space. This celebration is really about you, the audience. Your attention and years of loyalty have given us the ability to produce all this content and more. We have an incredible library of content that we are constantly trying to figure out how to link to and remind you about. And we look forward to the next 10,000 stories we share with you that document our collective watch discoveries.