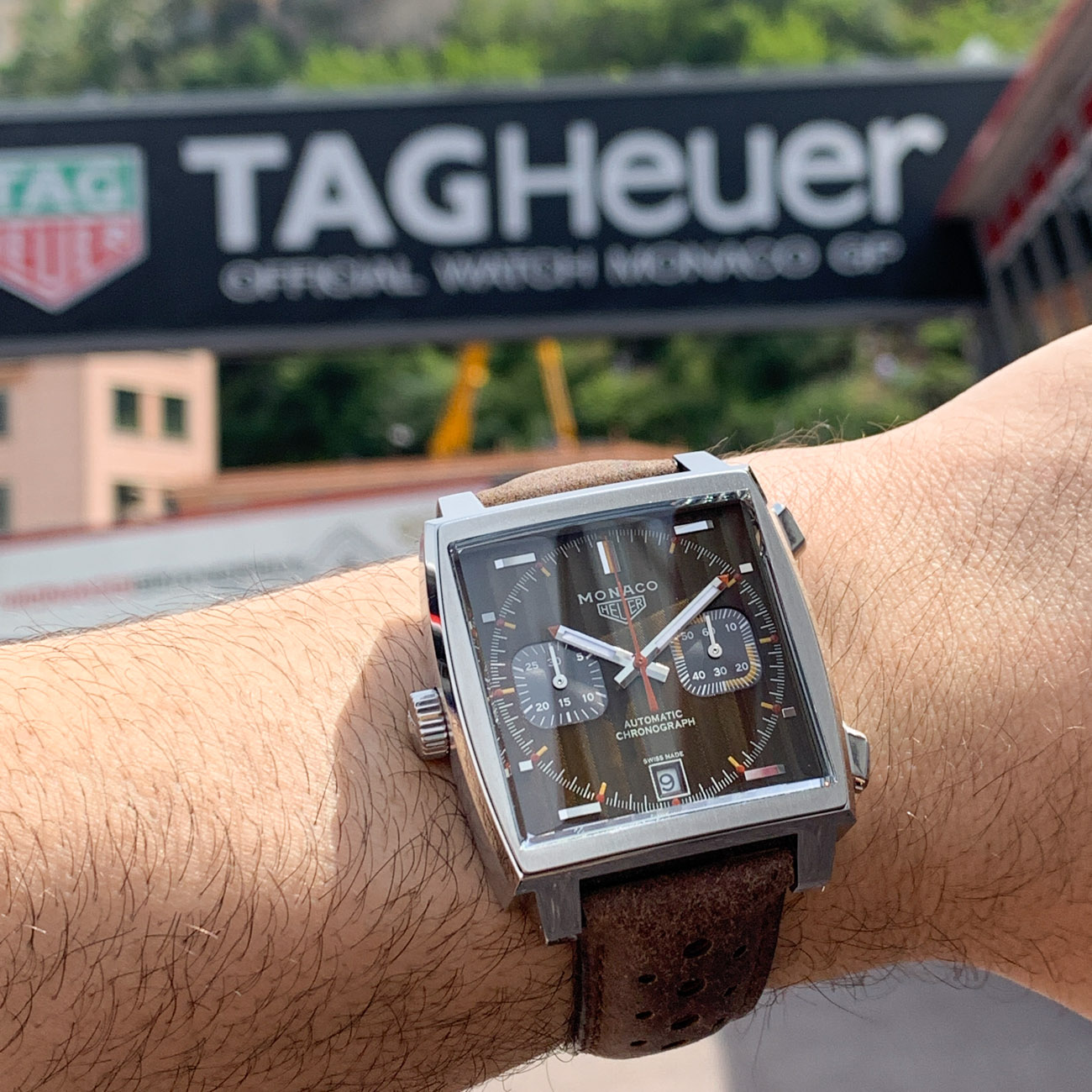 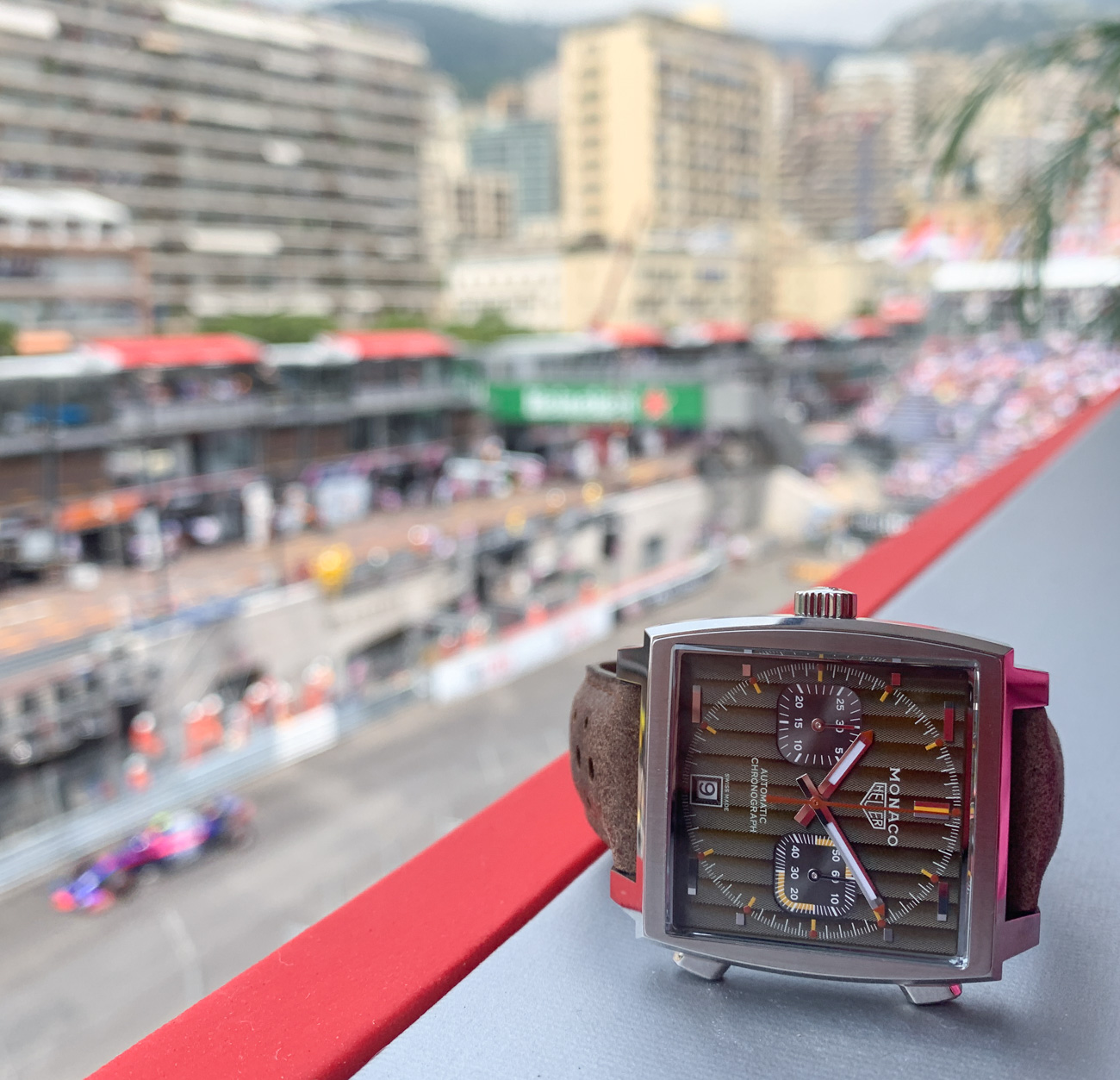 A deliciously candid video interview with the eldest living part of TAG Heuer’s legacy – Mr. Jack Heuer – played for us at TAG Heuer’s 50th anniversary of Monaco watch party, in Monaco. In it, the origins of the Heuer Monaco watch name were revealed. A paraphrased account of a smiling Mr. Heuer’s sentiments: “Monte-Carlo as a name was taken but Monaco was available and sounded pleasant. We agreed it would make for a good wristwatch name.” You’d be forgiven for not knowing this fact because the Monaco watch is a historic fixture in the world of racing chronographs and also happens to be the official watch partner of the Monaco Grand Prix race. 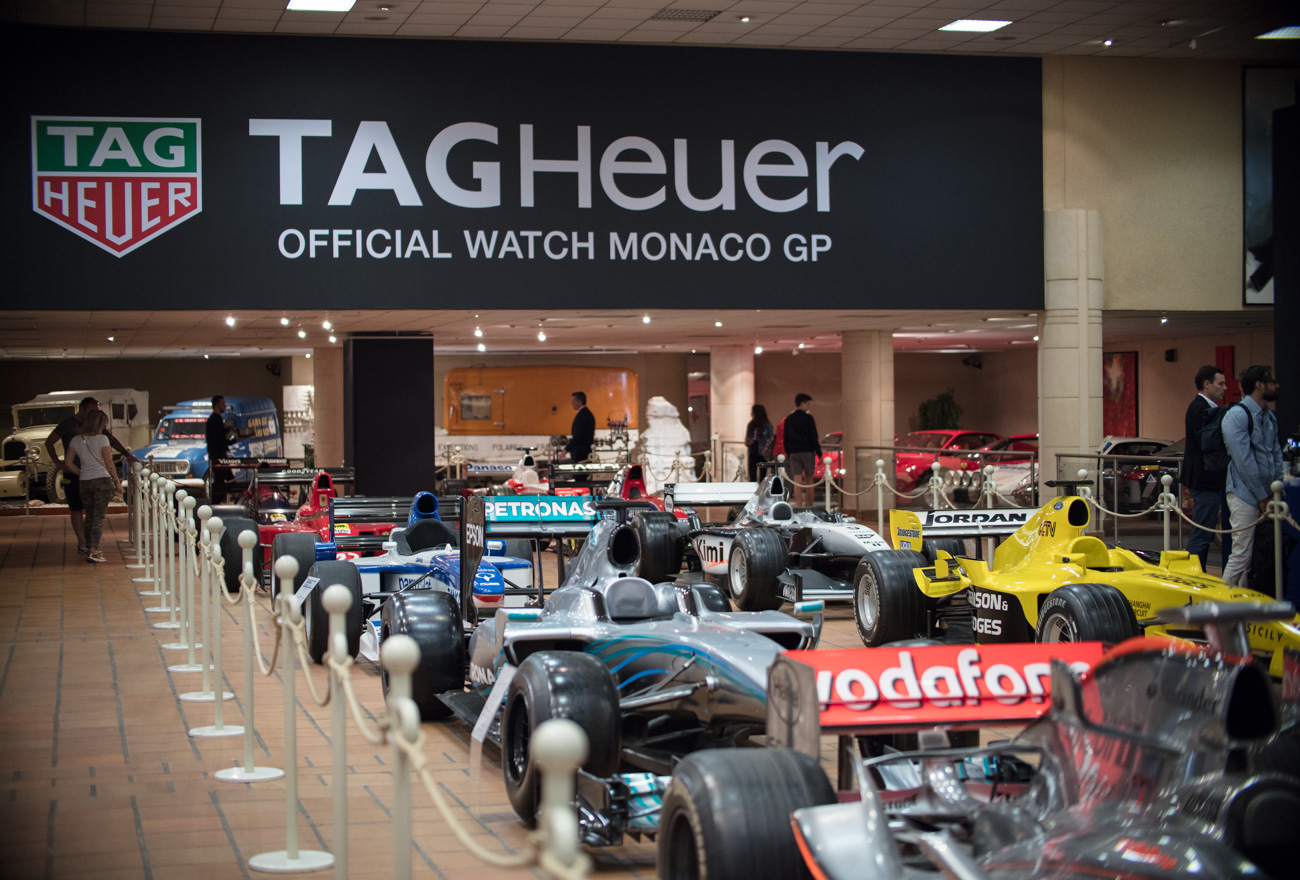 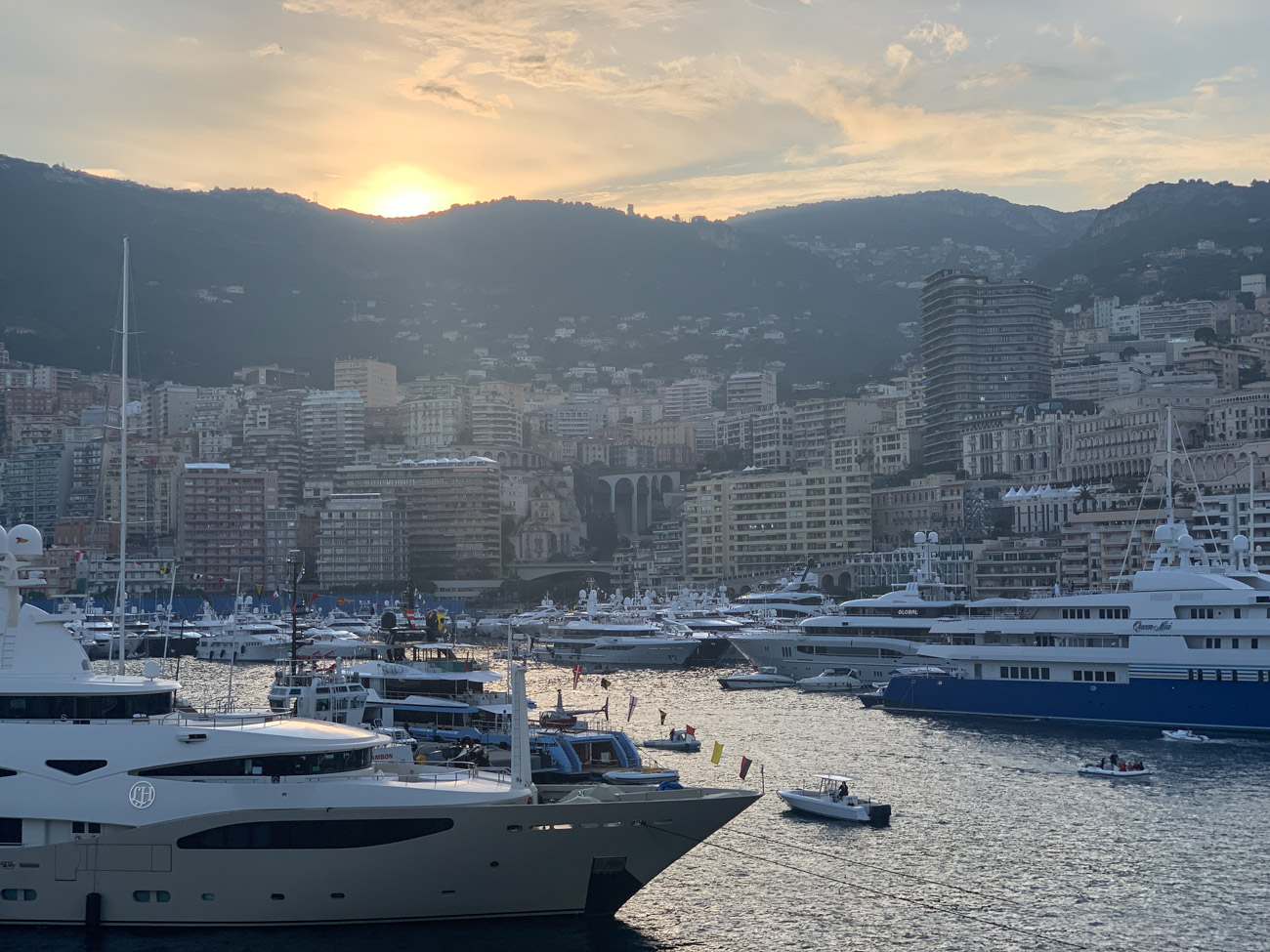 Indeed, the Monaco watch and the Monaco race came together harmoniously only later in their lives and are now celebrating marriage-style bliss. In fact, TAG Heuer parent company LVMH and the region of France surrounding and including the principality of Monaco have an incredibly special relationship. Why? Well, Paris-based LVMH with its large number of trend-setting luxury brands sees itself as a center of French haute couture culture and prestige. The south of France along the coast happens to be the country’s center of luxury spending. There is no better place for LVMH and its brands to mingle and mix with its clients and customers than cultural events in Monaco. The most important and massive of these is the Monaco Grand Prix. 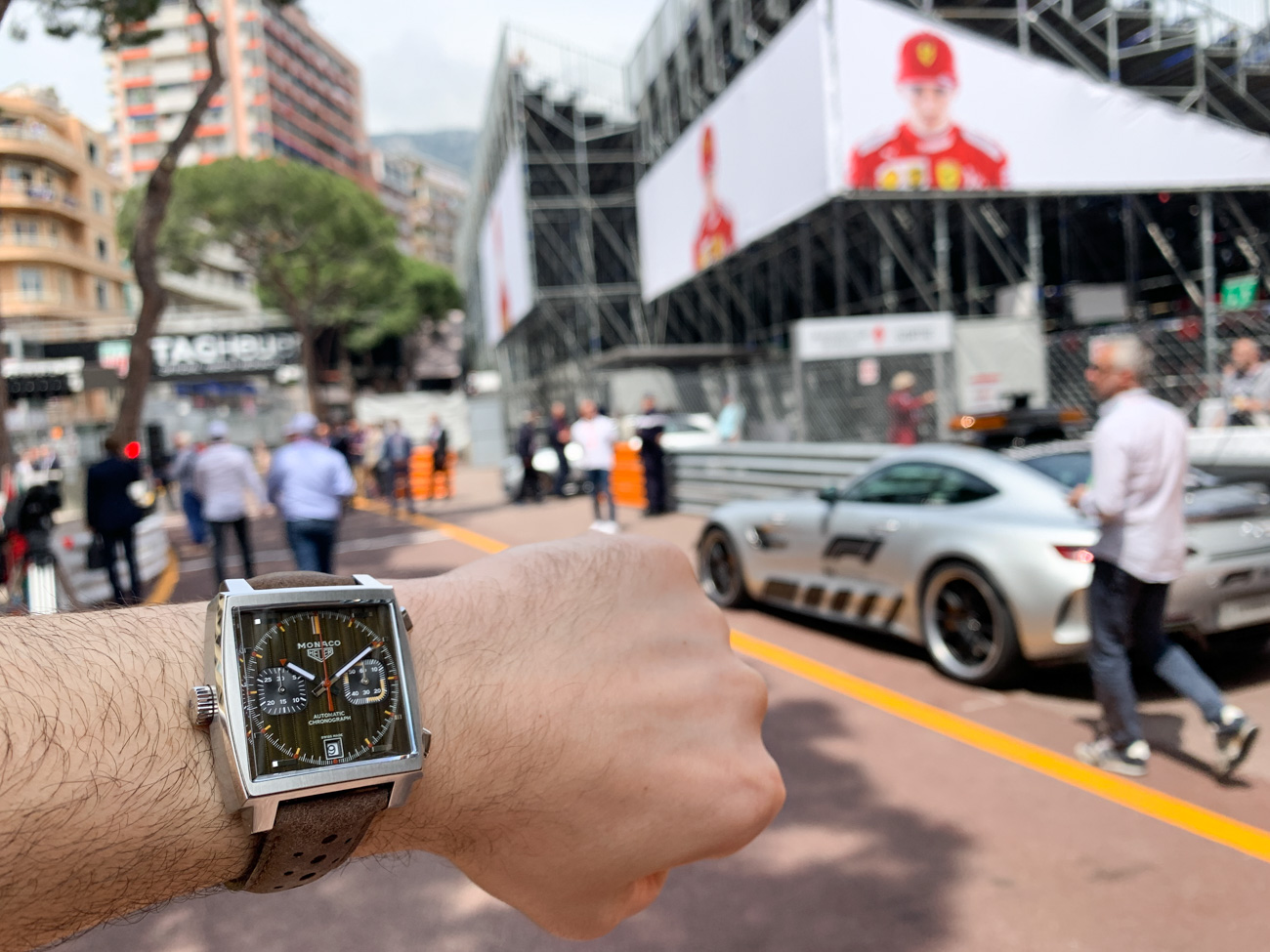 Now in its 90th year (although there have not been 90 runnings) the Monaco Grand Prix is a distinctive track in the Formula 1 race series circuit. I understand that Formula 1 race cars are the most expensive in the world to build and develop. They are incredibly powerful and built for speed, acceleration, and handling on relatively flat tracks. TAG Heuer has a product collection called the Formula 1, but my emphasis here is on the Monaco Grand Prix because, for the time being, Rolex is actually the current title sponsor of Formula 1 (though it was once Hublot, another LVMH brand). 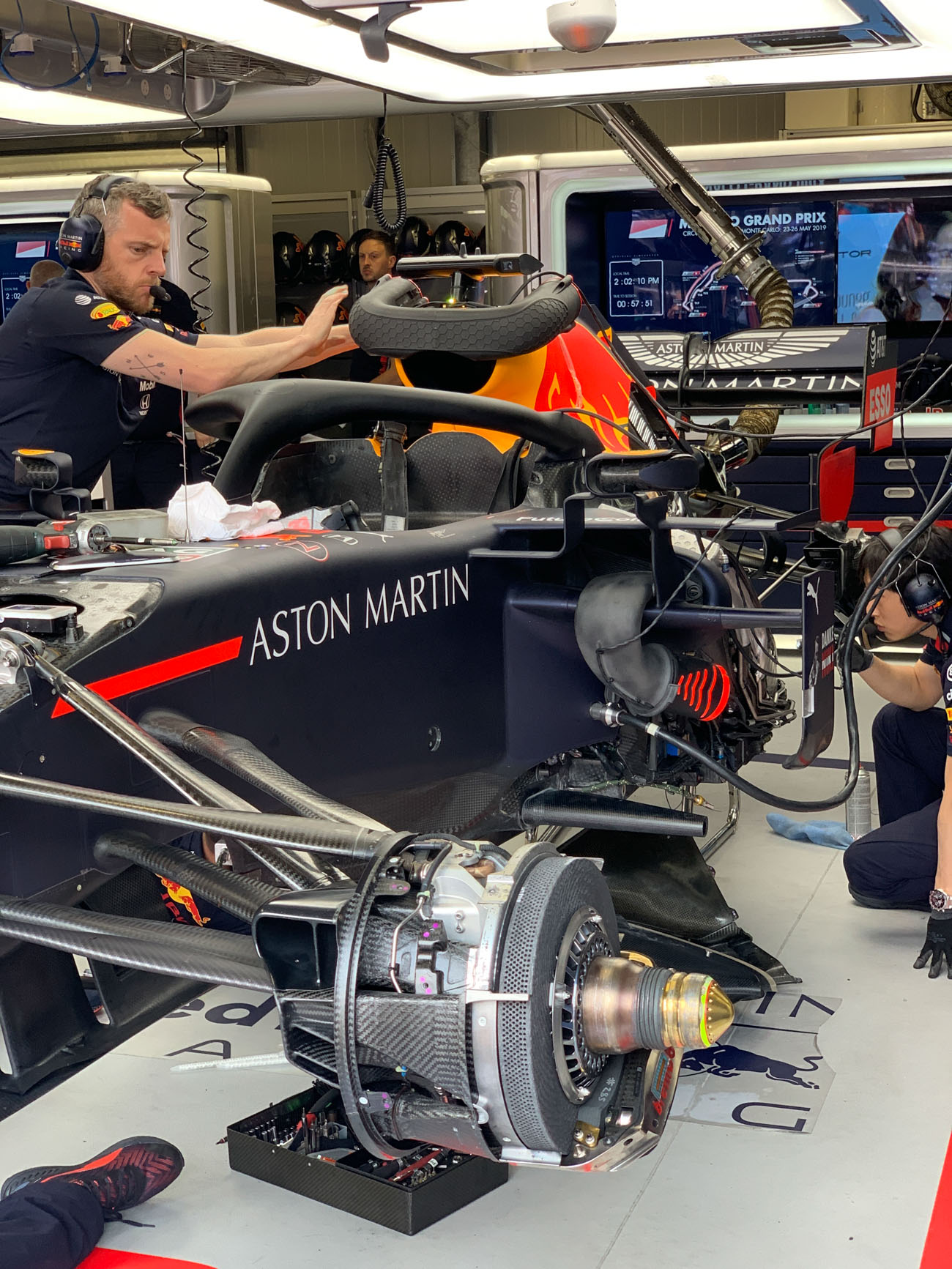 I came to Monaco for my first time this year as a guest of TAG Heuer to experience the 2019 Monaco Grand Prix. TAG Heuer is not only the official timepiece of the Monaco Grand Prix event itself, but it also sponsors one of the racing teams, Red Bull Racing. In Formula 1, each team has two drivers who each drive the race at the same time. Most Formula 1 racing teams have wristwatch sponsors, and currently TAG Heuer is joined by brands such as Richard Mille, Bell & Ross, Hublot, and IWC. 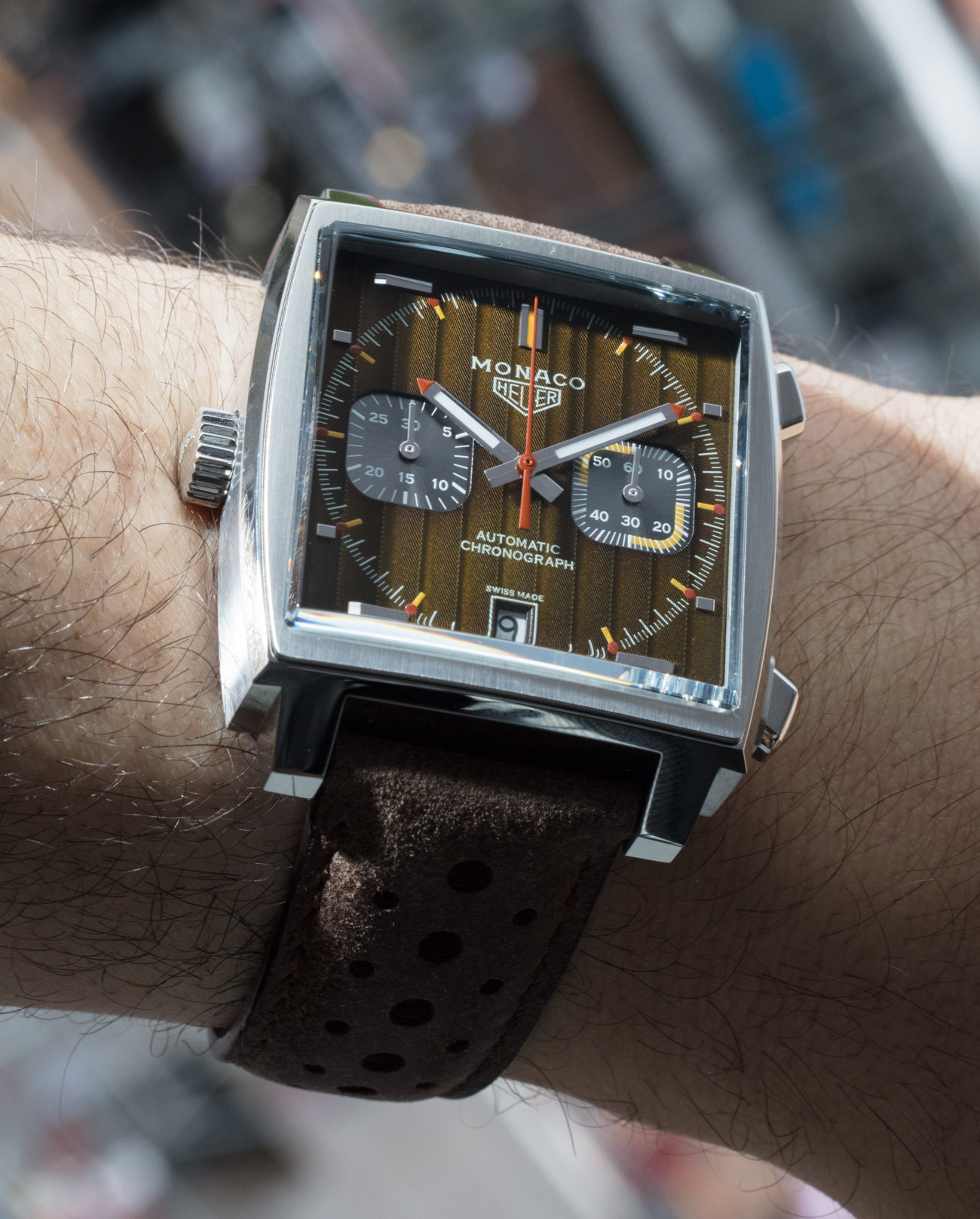 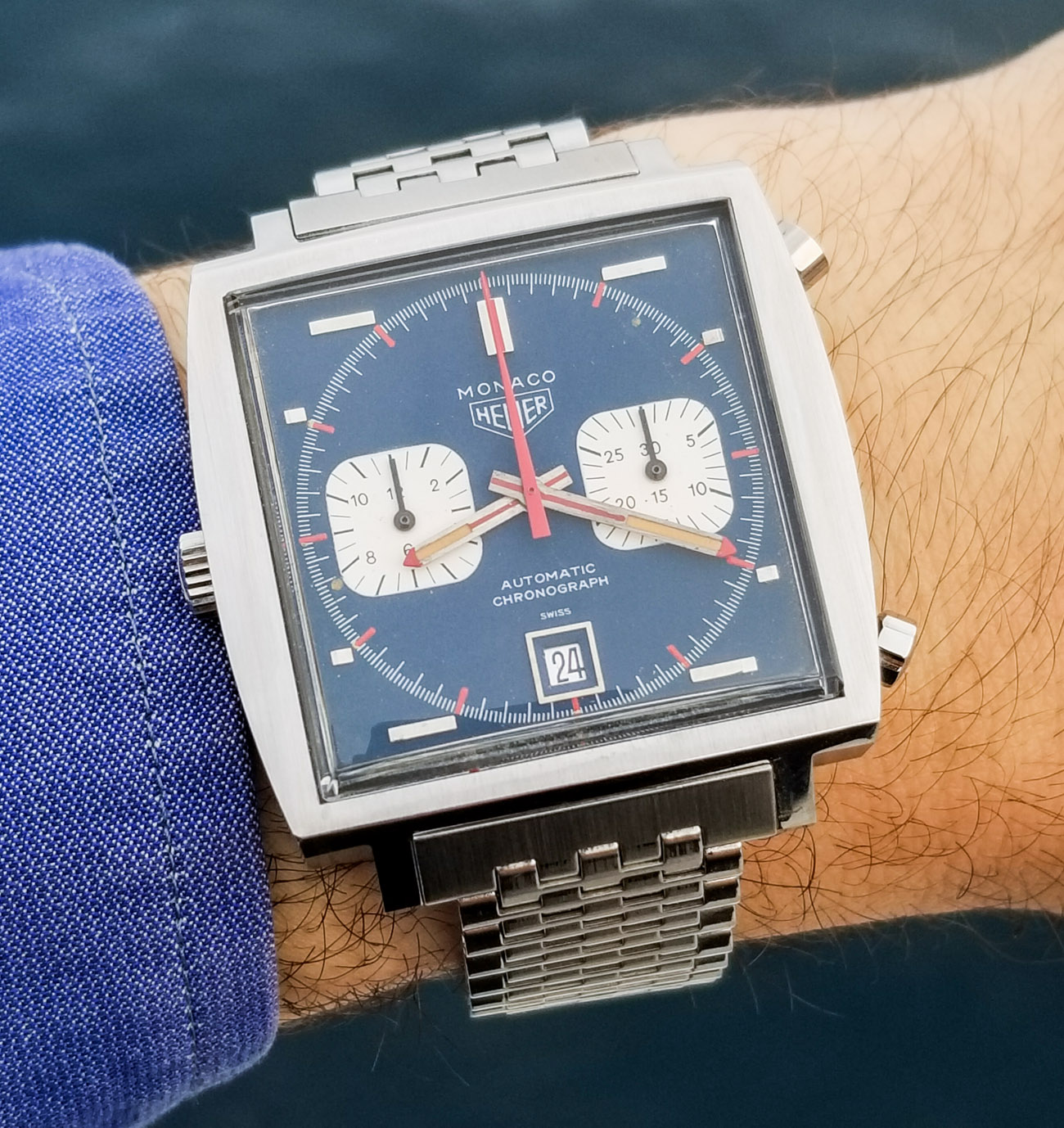 Monaco is one of the world’s rare principalities, which means it is under royal control, currently ruled by Prince Albert. (Why he isn’t referred to as the king is beyond my knowledge of the topic.) Monaco is virtually identical, culturally, to surrounding France, with the notable exception of its tax and money rules. Monaco doesn’t have income tax and also happens to have the world’s highest per capita number of millionaires (and, increasingly, also billionaires). Monaco is a very small city and, because having a passport (along with no income tax) requires actually living there, it has the most expensive real estate in the world.

Even TAG Heuer will admit that the Monaco watch first gained popularity when, by chance, it was selected to be worn on the wrist of actor Steve McQueen in the movie Le Mans. The Monaco watch was first introduced in 1969 to debut an important new movement technology from TAG Heuer, that being the Calibre 11 movement, which was both an automatic and a chronograph. In 1969, three companies — Seiko, Zenith, and TAG Heuer —  introduced an automatic chronograph movement, so it is hard to claim who was actually the first. Today,  TAG Heuer continues to produce what is still known as the Calibre 11 automatic chronograph in many (but not all) modern-day Monaco watches. The most distinctive feature of the Calibre 11 movement is that the crown and pushers that operate the chronograph are placed on different sides of the case. Practically speaking, this has the effect of giving the Monaco watch more ability to be visually identified while being worn. 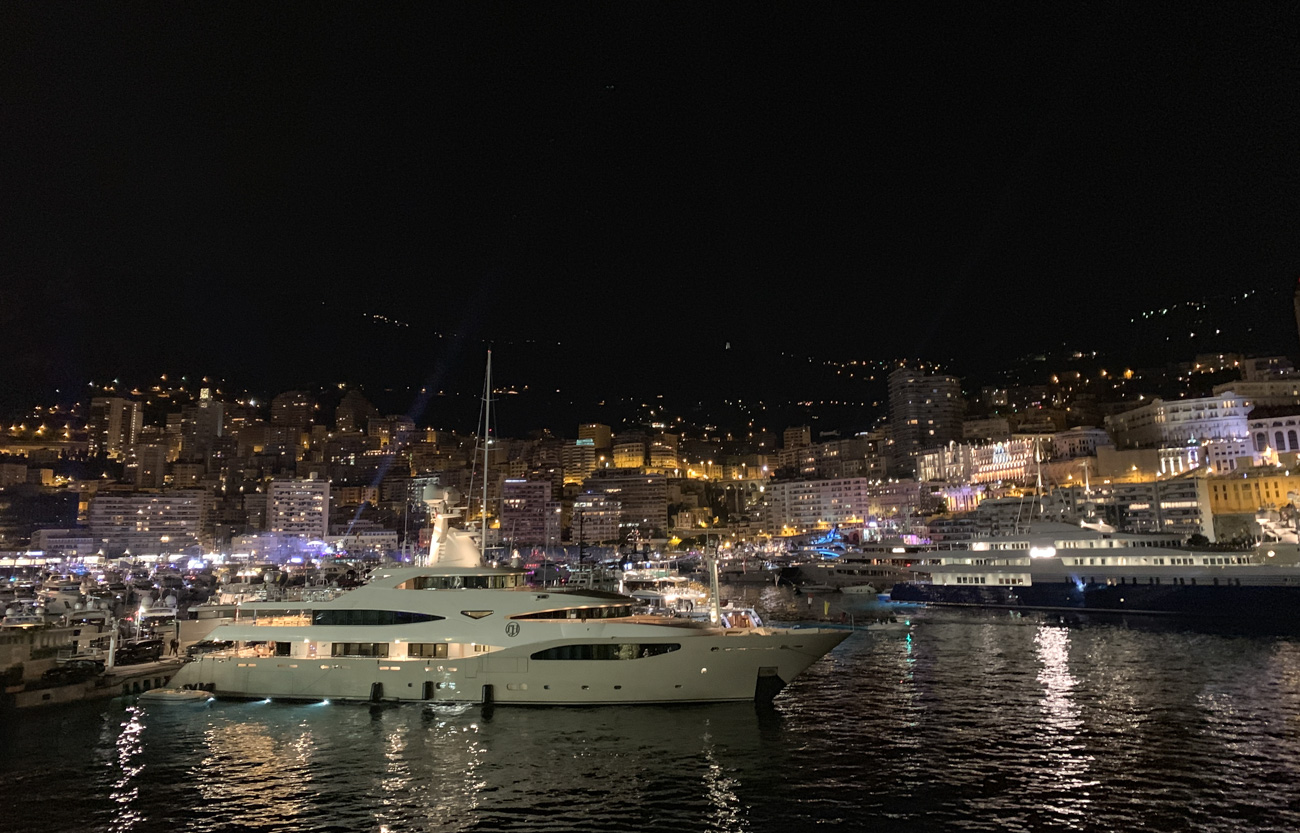 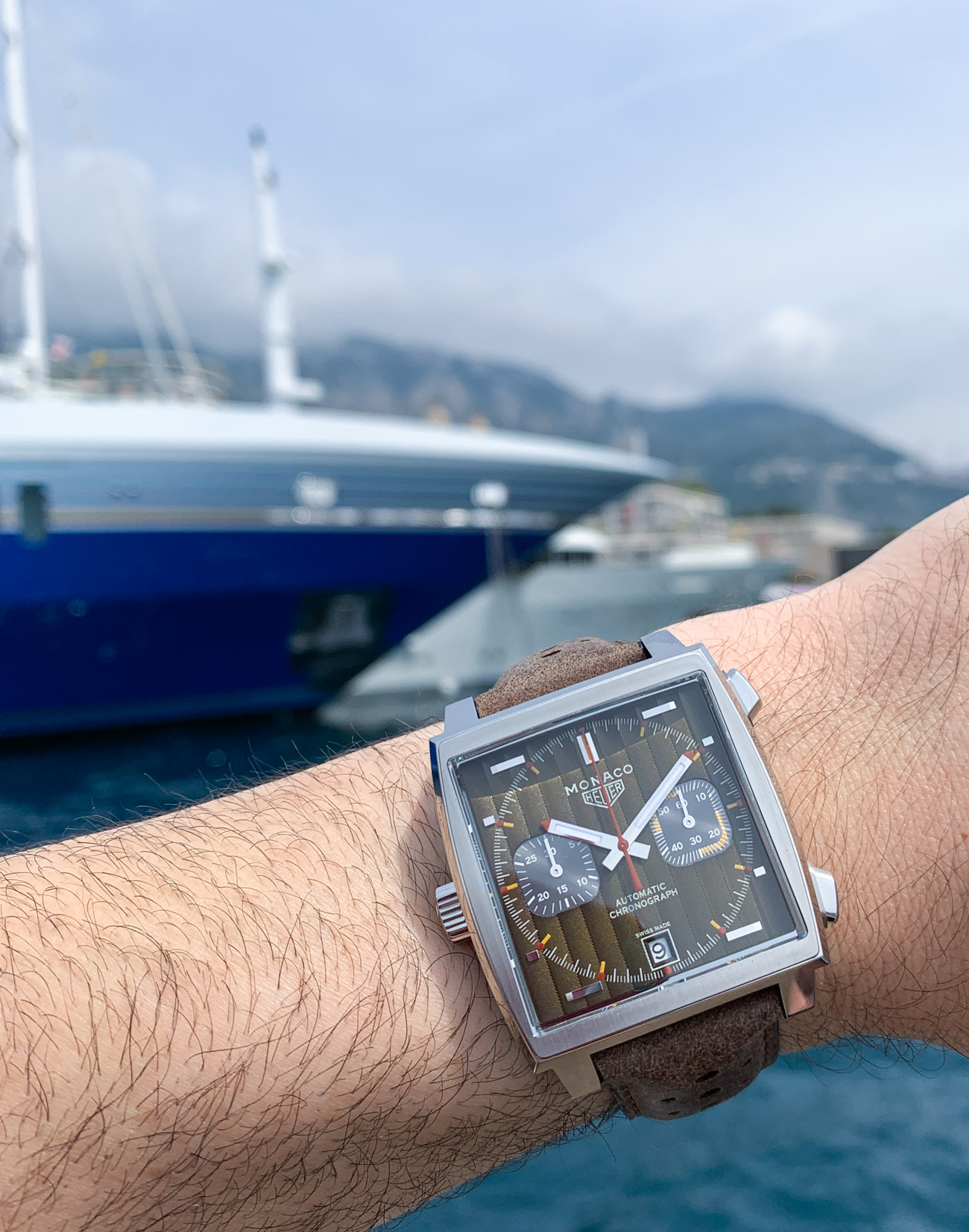 Monaco watch-spotting at the Monaco Grand Prix was impressive. TAG Heuer’s invited guests brought with them a dizzying array of the Monaco watches TAG Heuer has produced over the years. These include some of the now very rare original Monaco watches, as well as the great variety of modern versions that include both forward-thinking futuristic Monaco watches and vintage-style remakes. What hasn’t changed much over the years is the shape of the Monaco case (even though there are different sizes), which continues to be a classic.

Square-shaped watches are hard to get right, and there are very few famous square sport watches. What makes the 39mm-wide Monaco case so brilliant is that it combines right angles and curves. It isn’t a perfectly square watch, although it has a square shape. The case also has a very interesting way of integrating the sapphire crystal with the case in terms of the faceted sides of the crystal. Love it or hate it, most watch lovers agree that wearing a Monaco says something very bold about the wearer. 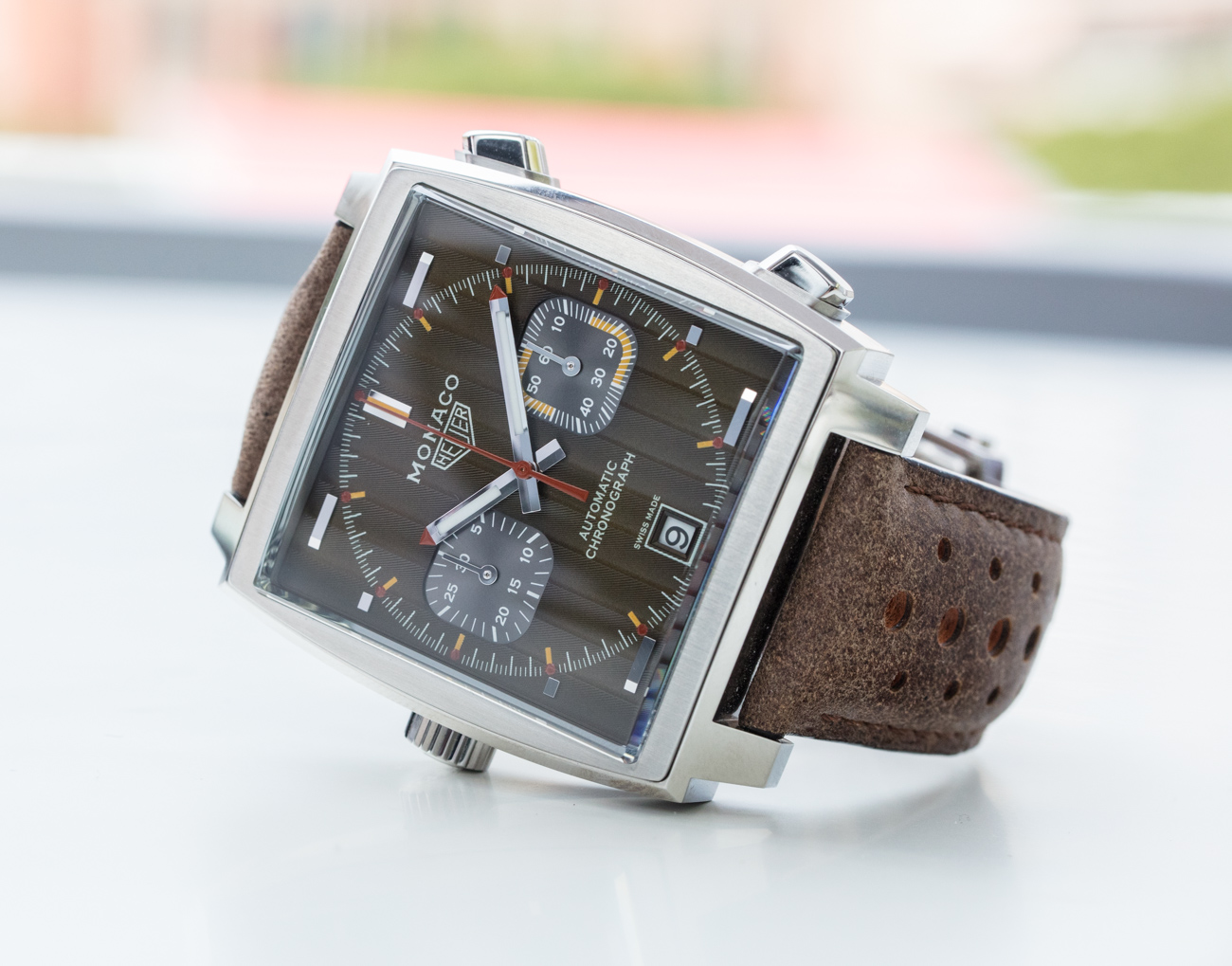 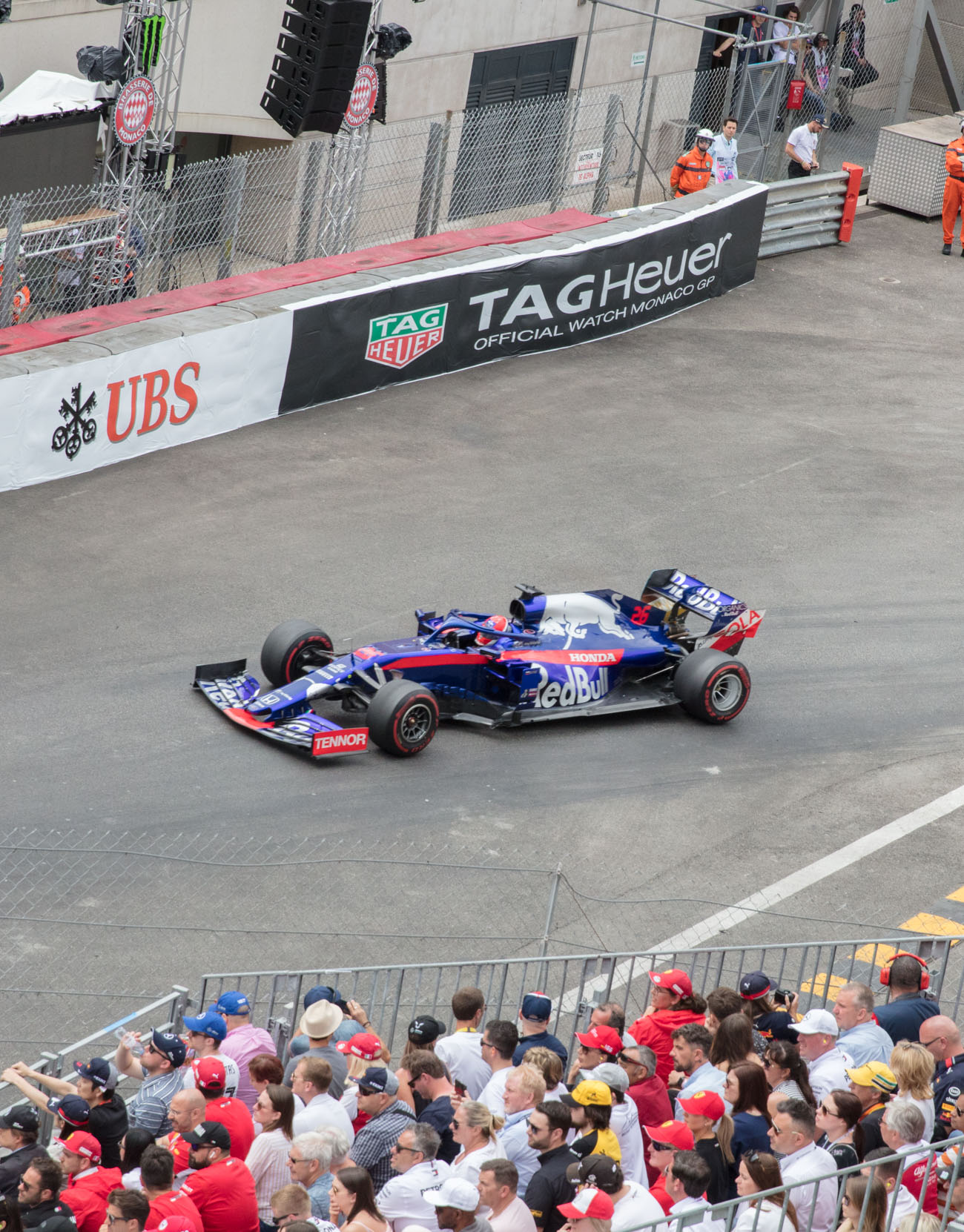 TAG Heuer likes to think of the Monaco watch-wearer as someone akin to the image of Steve McQueen — hip,  a rebel, and more interested in standing out than blending in. Does that define the typical Monaco wearer? The design of the watch is elegant but certainly different. One needs to be comfortable with the attention that wearing something different and bold gets you. The Monaco is not a brash watch in the scheme of bold watches but it is noticeably avant-garde.

Collector expectations of what TAG Heuer would do for the 50th anniversary of the collection were high. Especially in the context of a market in which 50th anniversaries for a lot of watches come and go without much fanfare or spectacle these days. Some people wanted TAG Heuer to entirely redesign the Monaco, and others wanted to see even more staunch celebrations of the timepiece’s history, as opposed to its future. TAG Heuer chose an interesting middle road. 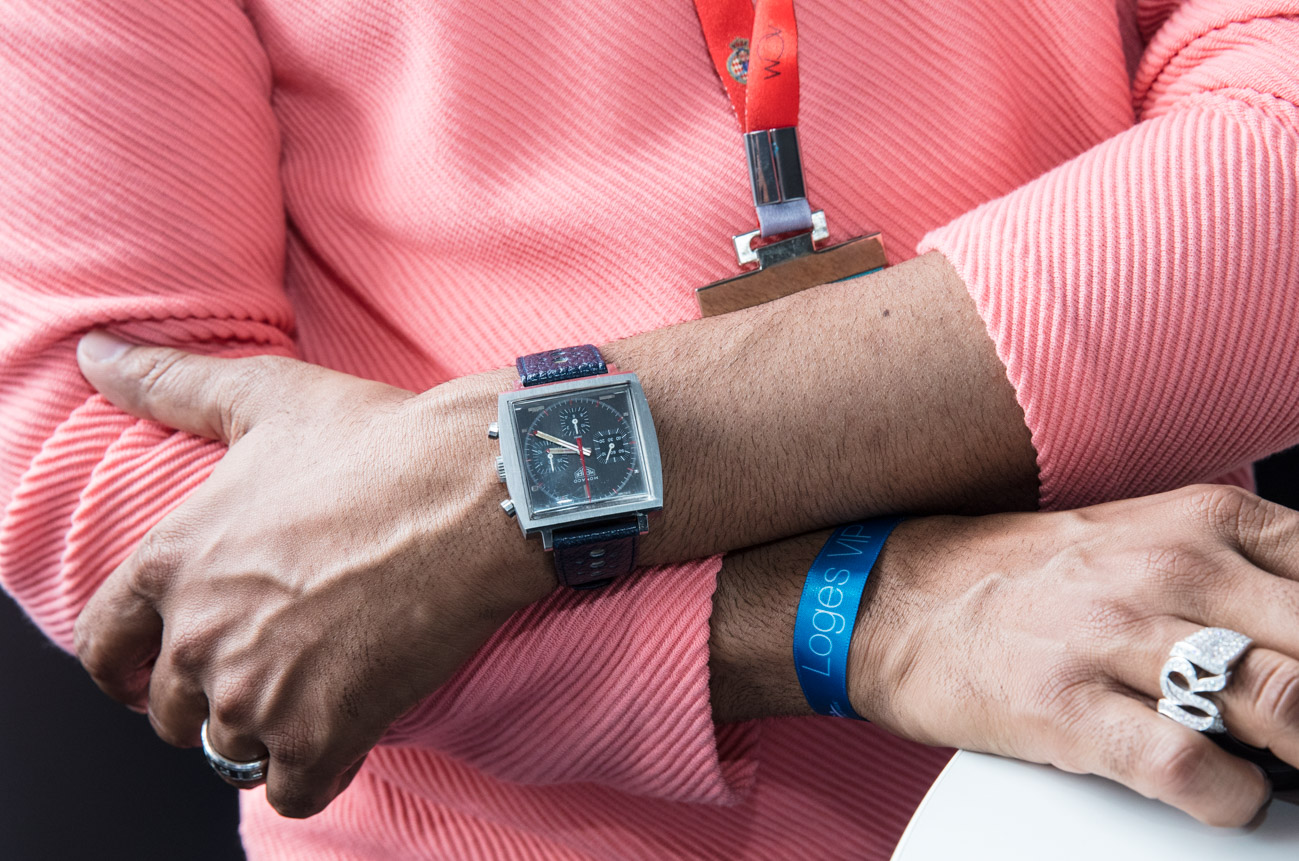 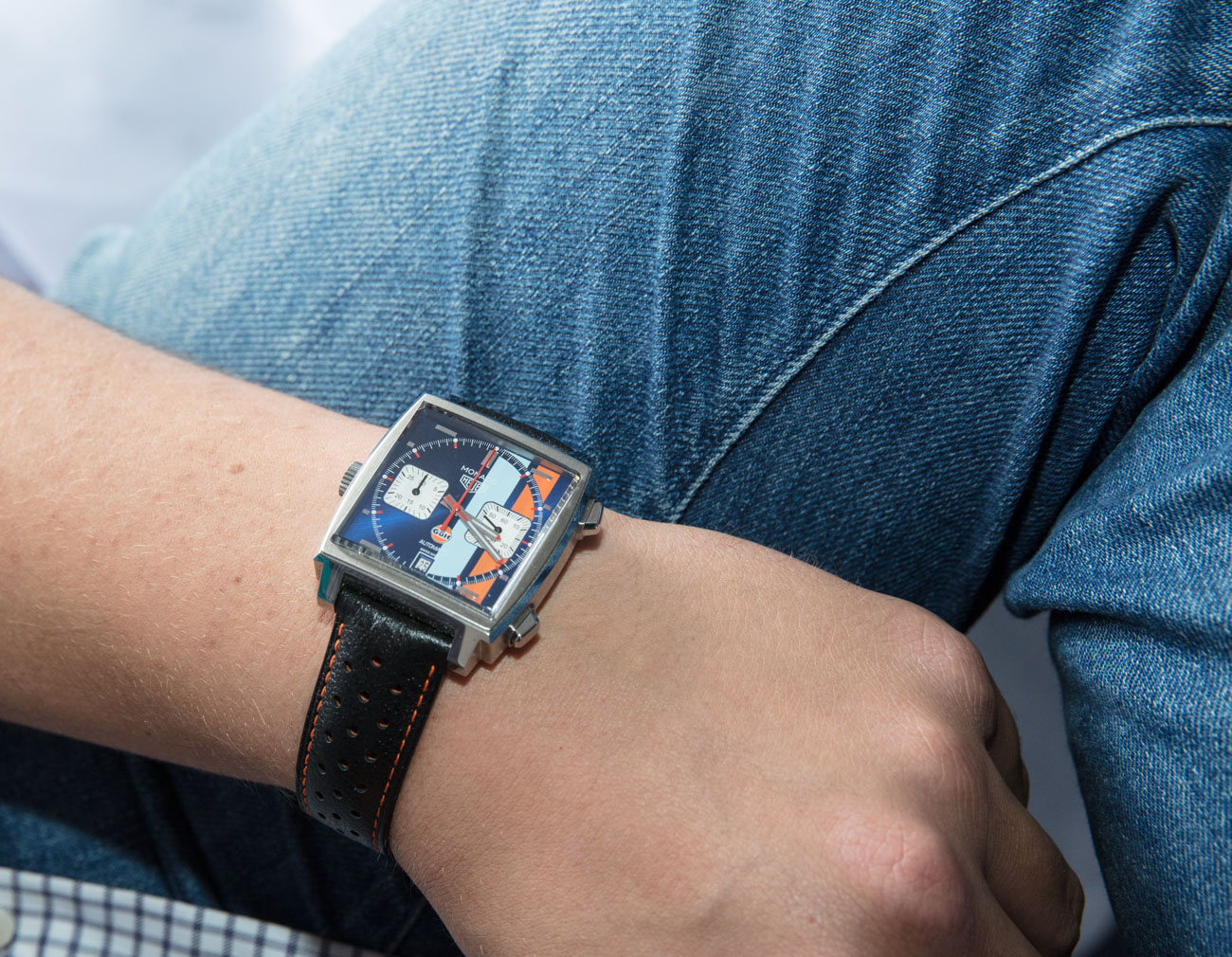 To celebrate 50 years of Monaco TAG Heuer decided to carve up the 50 years into five-decade-long chunks. Each decade would get its own limited-edition watch inspired by the visuals of that era. Only one of the five limited-edition 50th anniversary Monaco watches was announced at the 2019 Monaco Grand Prix. The watch is known as the Heuer Monaco 1969-1979 Limited Edition and it is typified by a metallic olive-green dial produced with vertical Côtes de Geneve-style decoration stripes. aBlogtoWatch went hands-on with the TAG Heuer Monaco 1969-1979 Limited Edition watch here with more details, pictures, and backstory.

Was there a party in Monaco? You bet. TAG Heuer chose the Monaco Grand Prix as the ideal time to have an elaborate LVMH-style party complete with brand ambassador guests, important friends of the brand, and of course aBlogtoWatch to represent the contemporary watch-collector community. The late 1960s and early 1970s-themed party was a great way to ring in the new Monaco and help celebrate one of TAG Heuer’s most cherished collections. The chic music and light-filled nights of Monaco are contrasted by the race days, which are typified by the scream of high-revolution engines and the smells of octane rapidly incinerating. 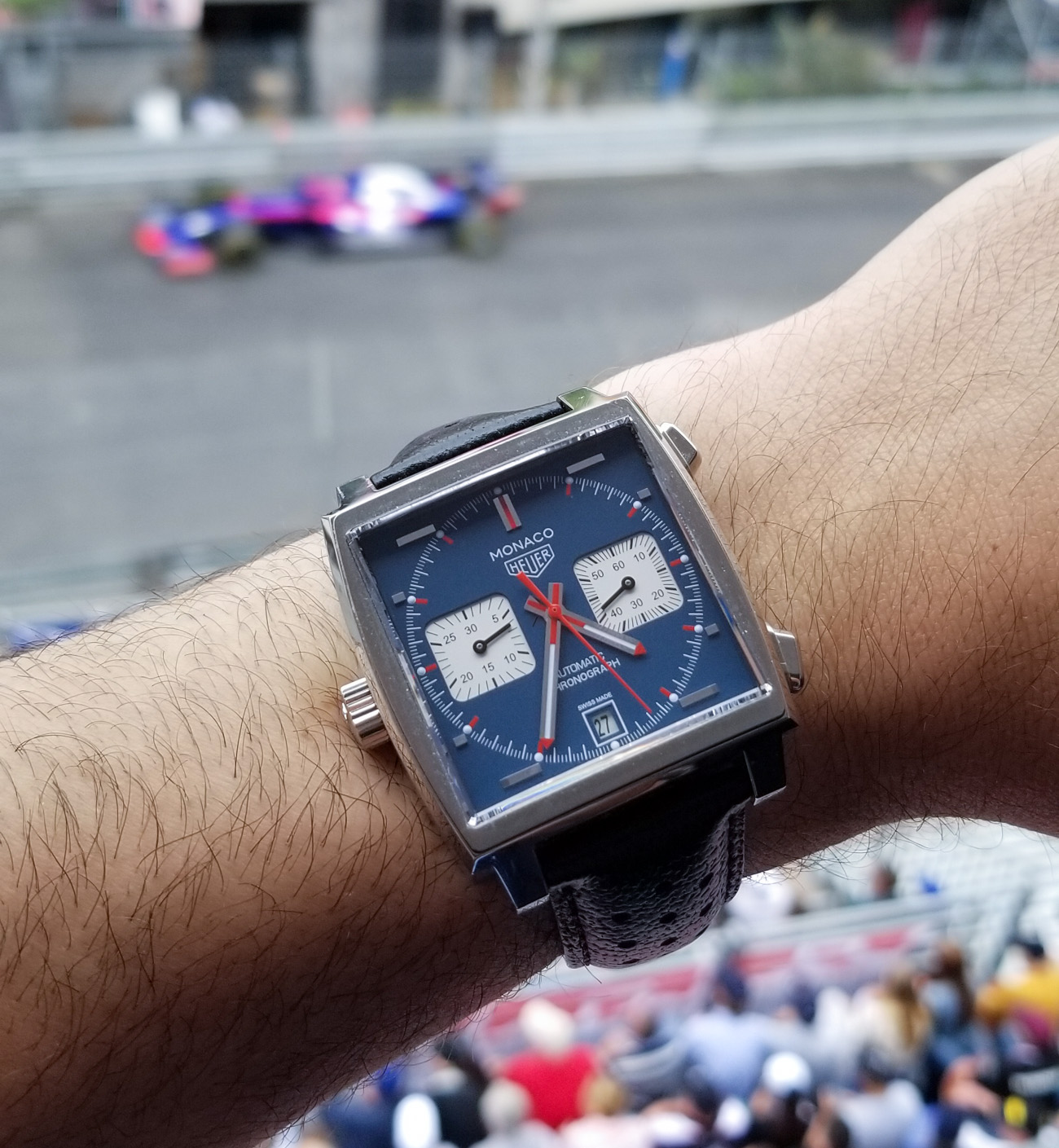 The Monaco Grand Prix race itself, like the Monaco region, has special rules that apply only to it. The regions’ rulers have a deep connection with racing culture themselves and, because of this, the Monaco Grand Prix is one of the most tightly curated and tweaked circuits, with changes to each subsequent edition. The race is also one of the most dramatic, being an exceptionally difficult course (so many turns) as well as running straight through the city and along the yacht-crowded marina. There aren’t too many other places where you can experience the sights and sounds of Formula 1 from the comfort of your own boat. 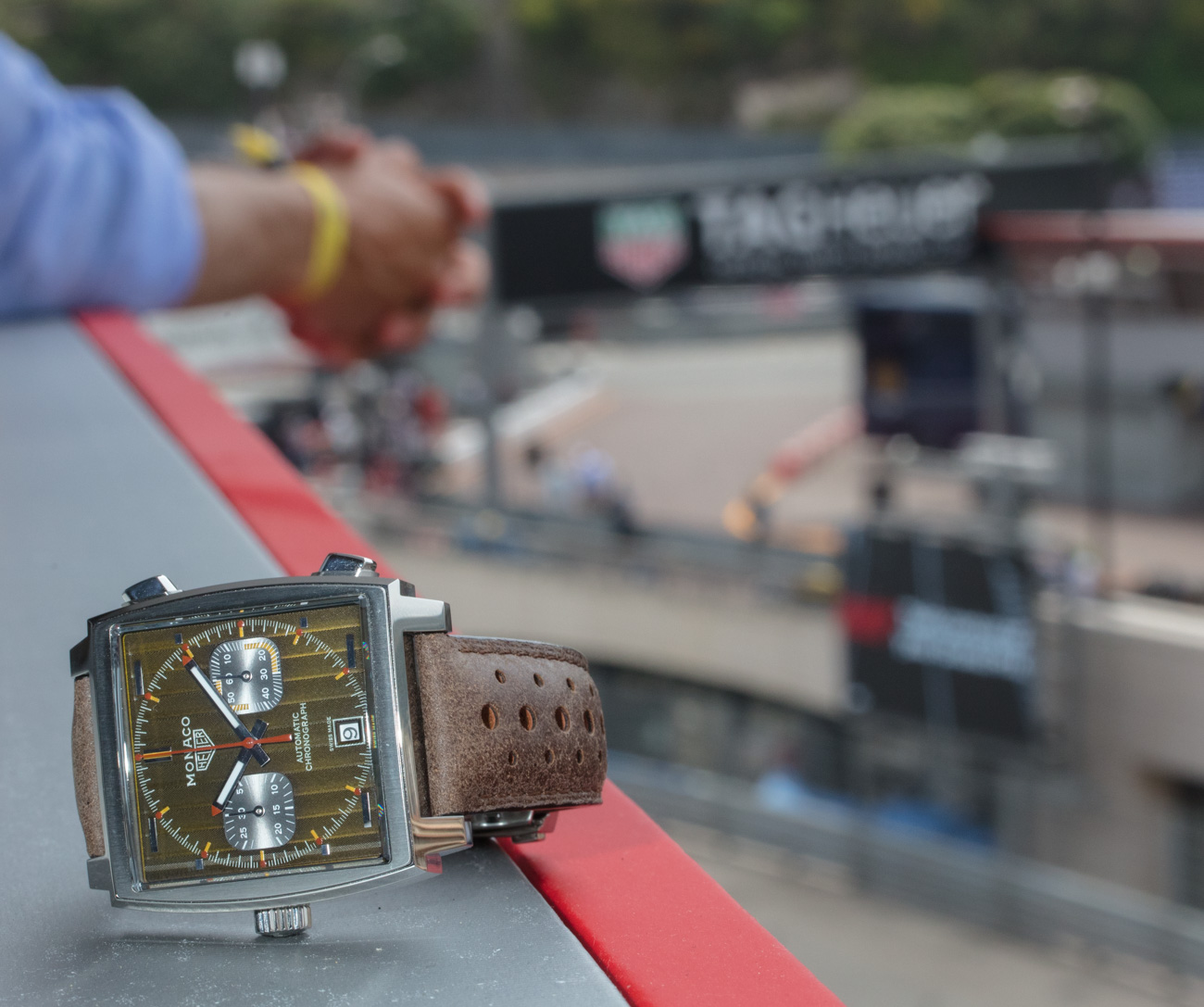 Having an experience in Monaco while wearing a Monaco is a pairing I recommend to all watch collectors. Something about the design and quirky personality of the Monaco lends itself well to free spirits and fast riders. Monaco is one of the world’s best places to show off your watch and, given that it shares a name with one of TAG Heuer’s greatest watches, there is no excuse not to combine the two. You don’t need to pretend to be Mr. McQueen if you want to imagine the personality you can expect from a TAG Heuer Monaco. For me, it is a watch about open-ended possibilities and taking risks. It is the anti-conservative luxury sport watch, even though, in all respects, it satisfies what a luxury watch actually is today. The Monaco is among the few “big brand” watches that still has a very adventurous, entrepreneurial spirit. I look forward to what TAG Heuer does with the Monaco next and hope I get to experience it in Monaco once again. Learn more at the TAG Heuer website here.