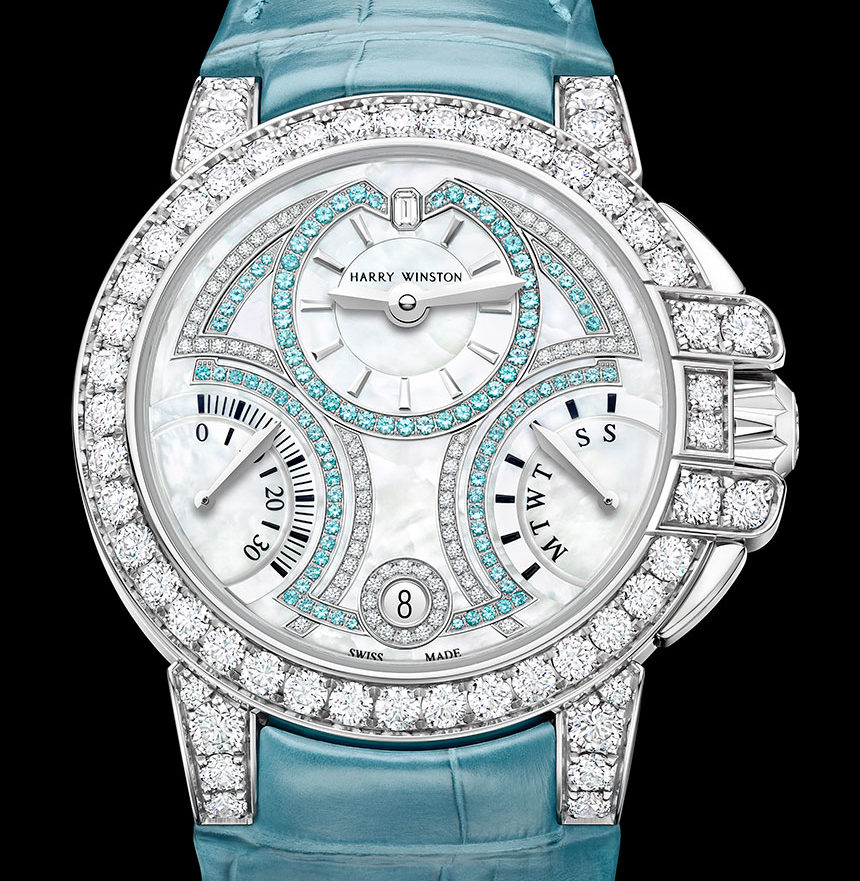 Since the Swatch Group took over Harry Winston in 2013, it has gradually repositioned the company’s watch collection to more closely reflect its heritage as a jewelry company. Specifically, it is a jewelry company that began in New York City in 1932, the height of the Art Deco period in design. Harry Winston loved the rigorous geometry of Art Deco; his favorite gem cut was the emerald cut, with its tapered corners and bevelled pavilion, along with its close cousin, the rectangular baguette cut. Harry Winston also loved big diamonds and became known as the King of Diamonds for selling of some of the world’s most important specimens, including the Hope Diamond, the Jonker, and the Lesotho. He is even mentioned in the classic song Diamonds Are A Girl’s Best Friend in the line: “Talk to me Harry Winston! Tell me all about it!” This year alone, Harry Winston introduced 10 new jewelry watches at Baselworld. Only Cartier or Graff can rival this prolific output of gem-set timepieces, and very few use such large, high-quality gems. Here we take a look at six of those new jewelry watches, which together contain a total of 55 carats of gemstones. 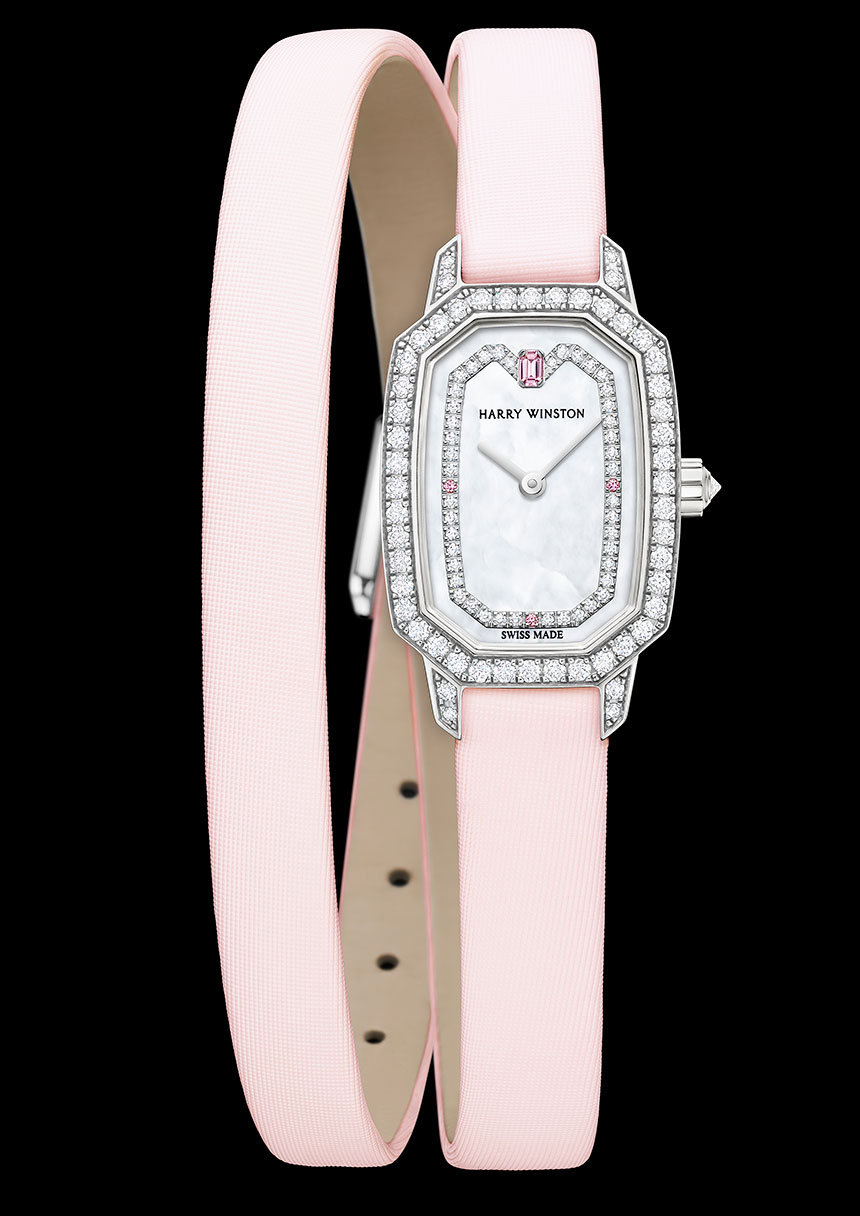 The Art Deco aesthetic is well represented in the the first three watches, the Avenue Classic Aurora, Emerald, and Marble Marquetry. Of these, the Emerald is the most everyday watch, set with diamonds and four pink sapphires that collectively total about a carat. Compared to the others, it comes across as pretty, rather than spectacular. Still, it is the most wearable, and at $13,800, it’s the most affordable of Harry Winston’s new jewelry watches. The double-wrap pink satin strap gives it a fashion watch vibe and represents a trend that other brands have picked up on, including Bulgari, Hermès and Baume & Mercier. The Emerald is set with 0.609 carat of diamonds, 0.031 carat of pink sapphires, and is powered by a quartz movement. 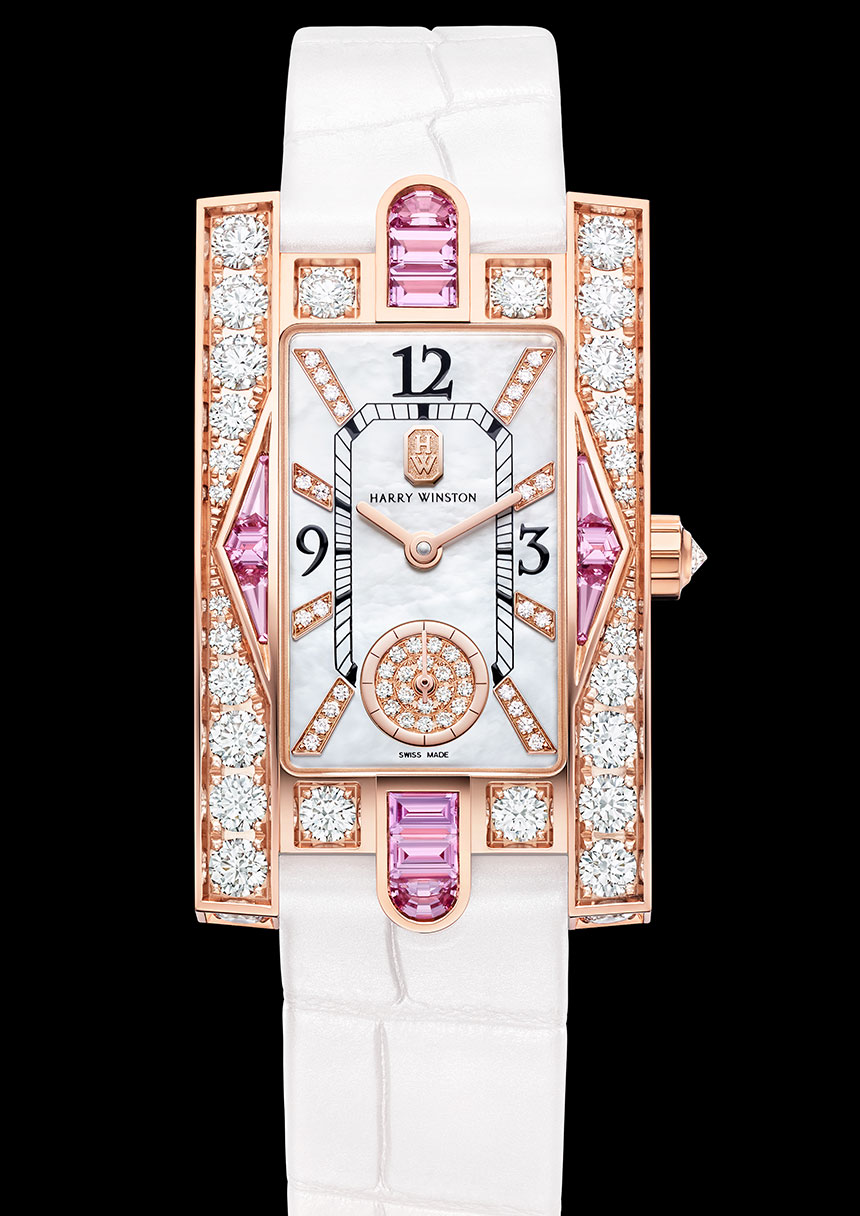 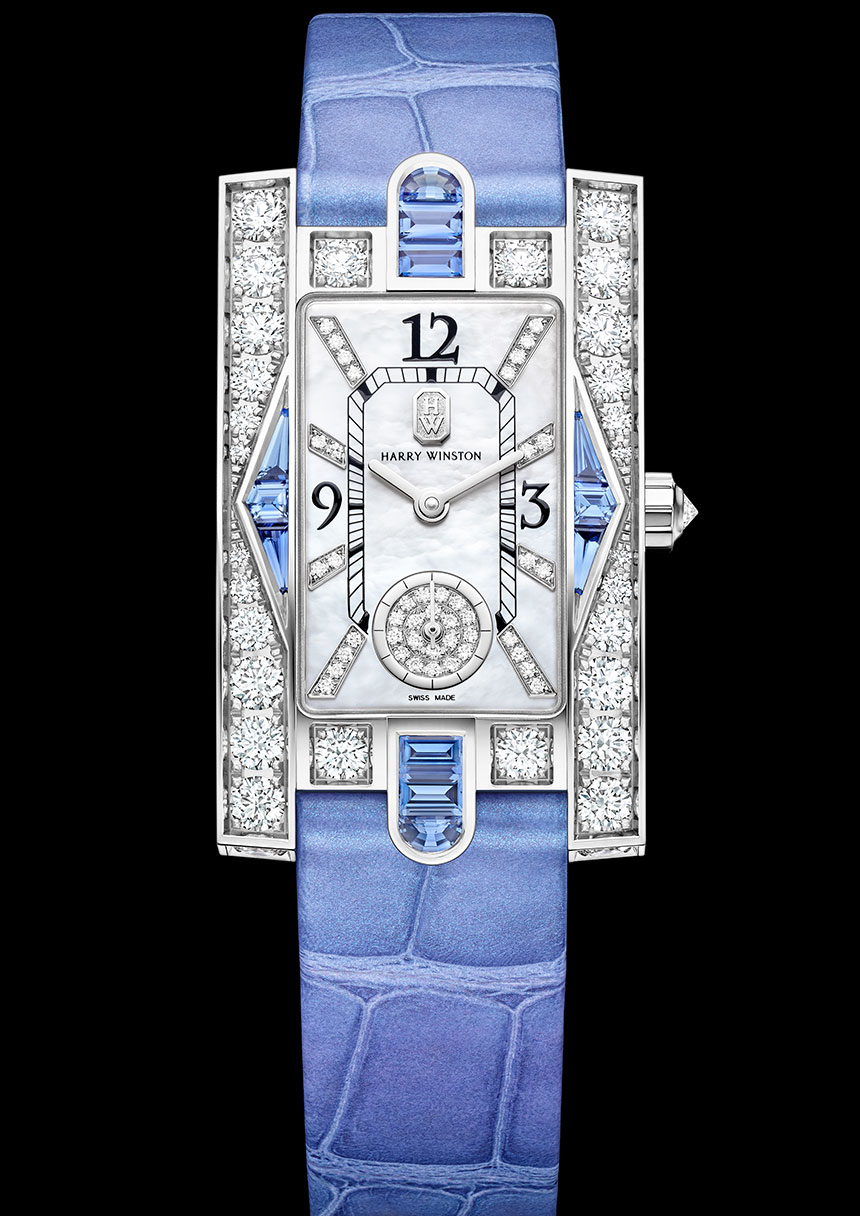 The Avenue Classic Aurora has a more architectural style, with its tapered baguettes and geometric settings resembling friezes and columns in Art Deco buildings. The meticulous gem setting on the tapered indexes (why use a single diamond to mark an index when you can use four?) and pavé small seconds dial are signature Harry Winston flourishes. The watch is set with 12 blue or pink sapphires, totaling 0.79 carats and 3.47 total carats of diamonds in 18k white or rose gold. The movement is quartz as well. Price on request. 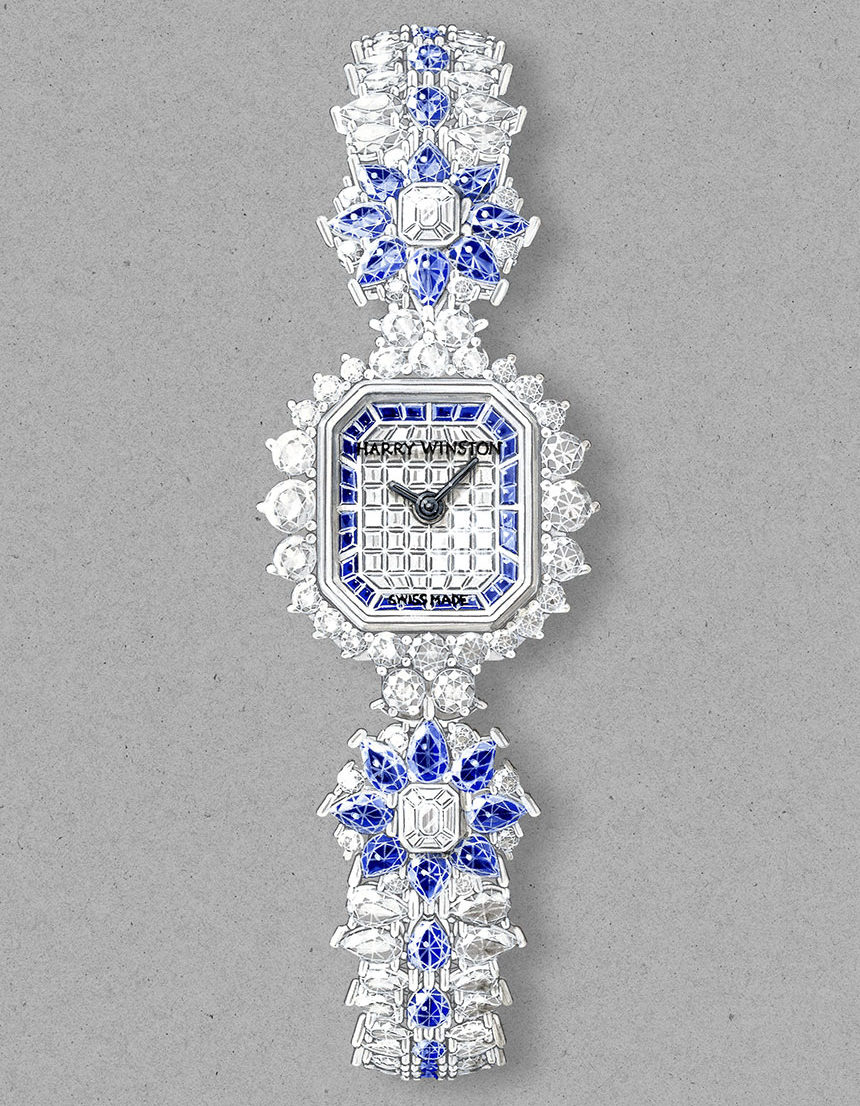 The Marble Marquetry is a platinum cocktail watch inspired by the star-shaped marble floor of Harry Winston’s New York flagship store. The gems radiate outwards from the dial in concentric halos. The dial is set with 48 invisibly set baguette diamonds and 48 round diamonds, surrounded by a halo of 28 baguette-cut blue sapphires, surrounded again by another halo of 24 round diamonds on the case. The bracelet is fully set with diamonds and sapphires, for a total gem weight of 9.48 carats of diamonds and 3.8 carats of sapphires. Like the previous watches, the movement is quartz. Price on request. 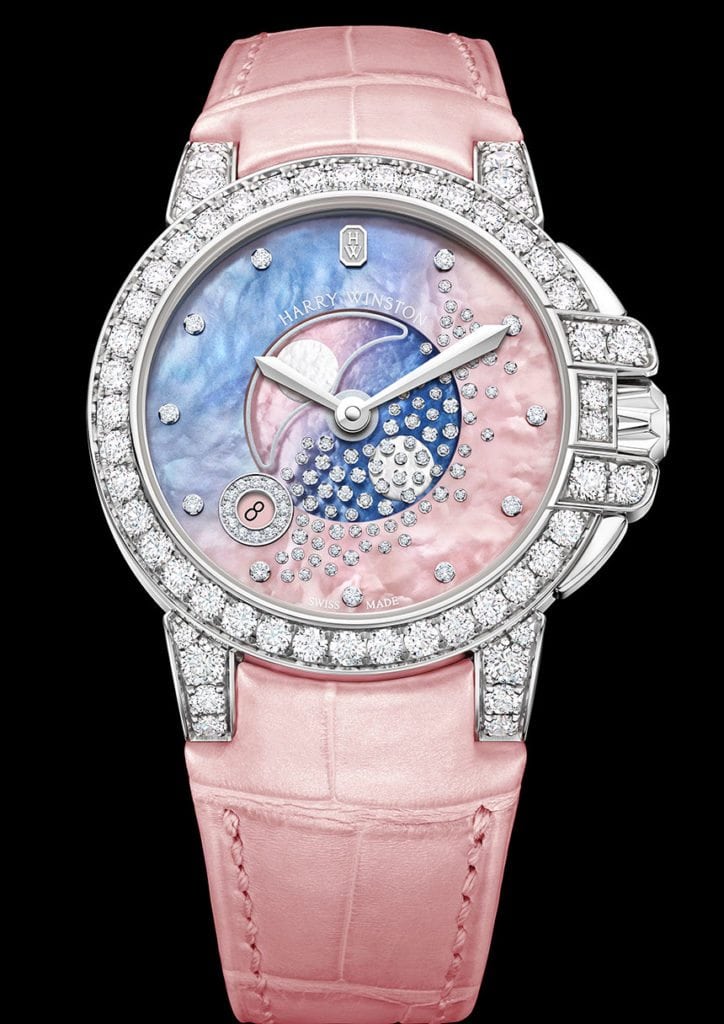 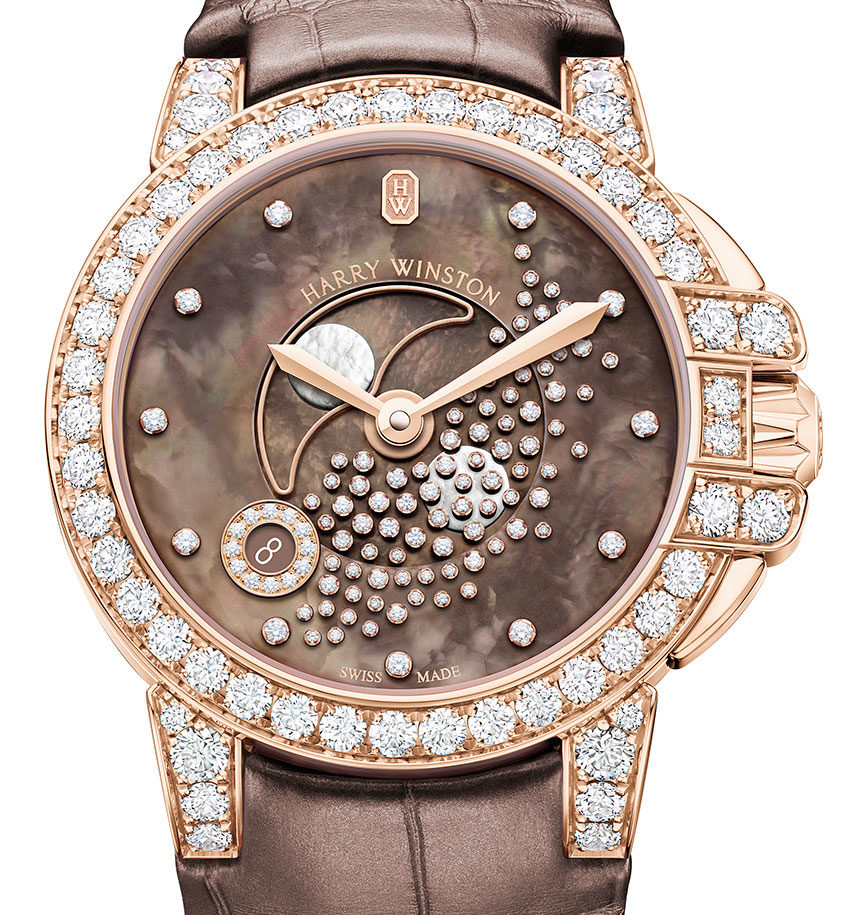 The next three are all round-cased watches in the Ocean collection, and they have a more free, creative style of gem setting. On the Ocean Moon Phase, 100 diamonds are set into the underside of the sapphire crystal, resembling stars in the sky that hover over the dial. The decorative moon adjacent to the actual moon phase indicator rotates, and as it does, it dips under the diamonds like it’s sinking, says Harry Winston, under the waves of the sea. The ring of diamonds around the date window is another signature Harry Winston touch that uses gems to highlight a complication. Altogether, the watch is set with 207 diamonds for a total weight of 3.49 carats. The movement is quartz, and the case is 18k rose or 18k white gold, with brown or a pink and blue mother-of-pearl dial. Price on request. 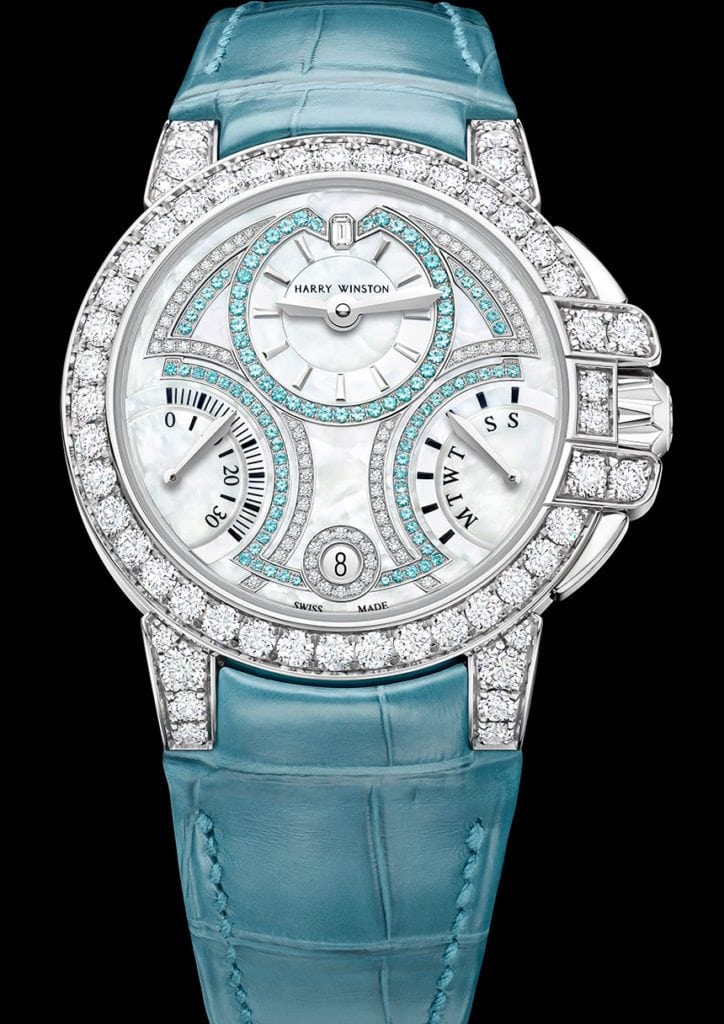 The 20th anniversary Ocean combines diamonds with rare and exotic blue Paraiba tourmalines, used to emphasize and outline the functions on the dial, including the hour and minute sub-dial at 12 o’clock and the seconds and day retrograde indexes at 4 and 7 o’clock. Diamonds frame the date window at 6 o’clock, which is counterbalanced by HW’s signature emerald-cut diamond at 12 o’clock. The beauty carries over to the caseback where the rotor is set with 23 Paraiba tourmalines. The total gem count is 170 diamonds, weighing 3.44 carats, and 120 Paraiba tourmalines, totaling 0.33 carats. It’s powered by the automatic Caliber HW3302 and is limited to 20 pieces. Price on request. 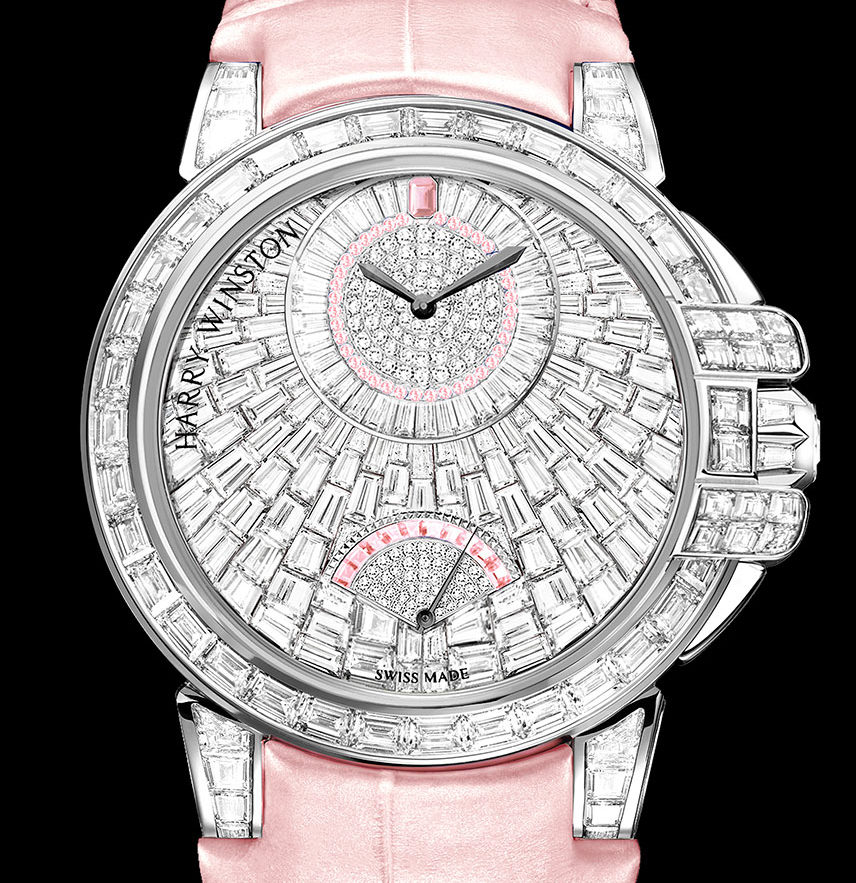 The dial of the Ocean Waterfall is set with 165 tapered baguette diamonds that fan out to resemble a cascading waterfall. Pink sapphires outline the hour and minute dial at 12 o’clock, including an emerald-shaped gem at the top, and the retrograde small seconds at 6 o’clock. The tapered baguettes are invisibly set, radiating downwards in a kind of brickwork pattern, with no visible metal work between the gems. It contains the automatic Caliber HW2202 with a 65 hour power reserve, and the rotor is set with 23 diamonds. The 36mm case is 18k white gold. The overall gem count is 307 baguette diamonds, totaling 12.39 carats; 97 round brilliant diamonds, totaling 0.29 carats; and 45 pink sapphires, totaling 0.158 carats. Price on request.

Four of these six watches have quartz movements, and aside from the creative design, much of their intrinsic value lies in their gemstone content, which again, totals just under 55 carats for all six. harrywinston.com