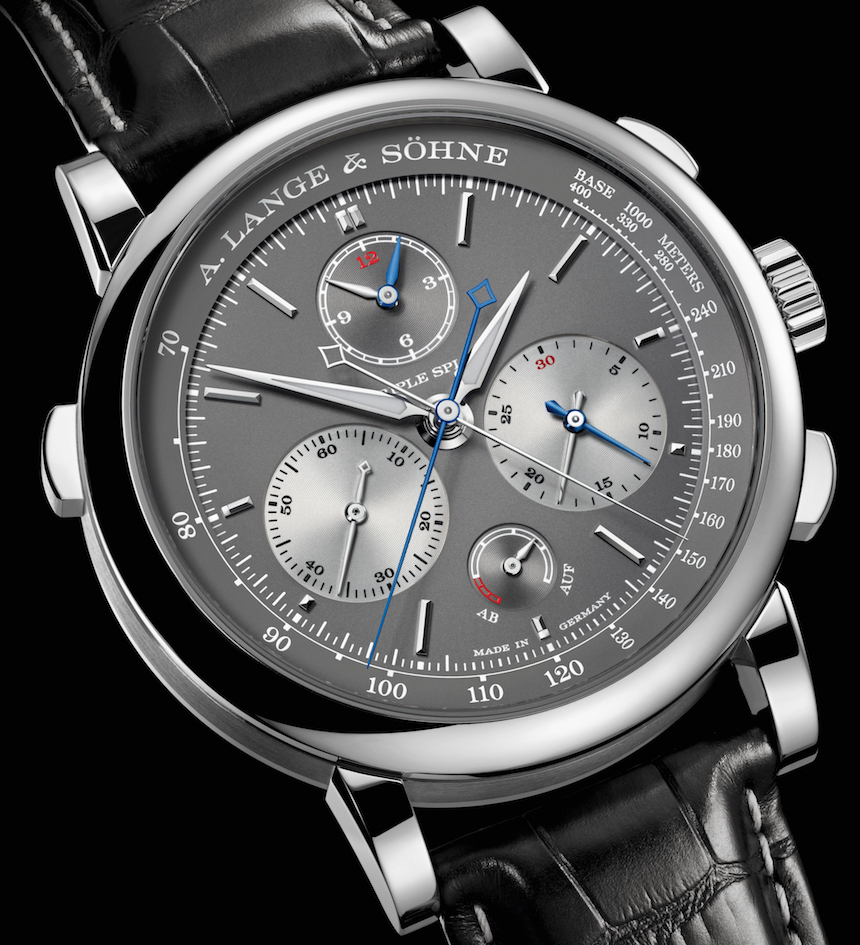 Back in 2004, Glashütte based manufacturer A. Lange & Söhne created the first mechanical split-seconds chronograph in the world capable of taking a comparative time measurement of up to 30 minutes. It achieved this via the use of an additional rattrapante hand (a French word originating from the verb rattraper, whose meaning is the act of recovering or catching-up) to the 30-minute counter. Now for 2018, the brand has set an even higher benchmark with the A. Lange & Söhne Triple Split, the world’s first mechanical chronograph that allows multi-hour comparative time measurements, and also happens to be equipped with a precisely jumping minute counter and a triple-flyback mechanism, because why the hell not? 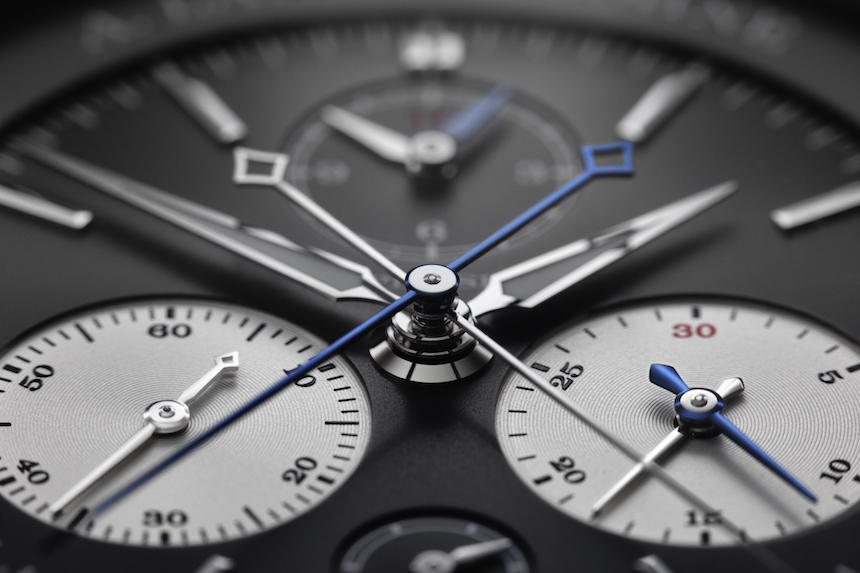 A typical rattrapante chronograph features two central second hands, one superimposed over the other, in order to time two events at once. When the chronograph is started, both second hands begin moving in unison. The rattrapante will typically have a third pusher at either 8 or 10 o’clock that will stop one of the two second hands, while the other continues to time the original event. There’s an inherent limitation with such a chronograph; they can only provide a comparative time measurement of up to a minute, since the chronograph second hand will catch up to the stopped rattrapante second hand a minute later. This is fine for fast-paced events where the differences between competitor’s times are within a minute.

By providing split hands for all three registers (seconds, minutes and hours), the A. Lange & Söhne Triple Split is capable of measuring comparative times from anywhere between one-sixth of a second, and twelve hours. This could allow it to measure the difference in times for long events, such as triathlons, Formula 1 races, stages of the Tour de France, or even outbound and return legs of a long-haul flight. Not content to stop there, the A. Lange & Söhne Triple Split is also equipped with a flyback function for all three pairs of hands, allowing the chronograph to be reset and instantly restarted by pressing the pusher at 4 o’clock. This allows the wearer to start timing something else immediately, unlike a standard chronograph which needs to be stopped, reset and then restarted in order to time a second event. 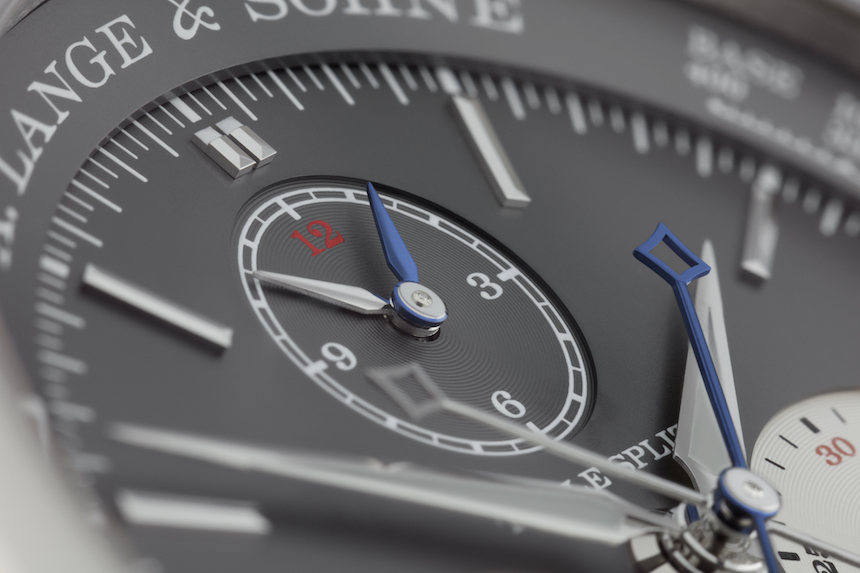 The dial of the A. Lange & Söhne Triple Split is well balanced considering all the information on display. Running seconds is located between 8 and 9 o’clock, while chronograph elapsed hours can be found at 12 o’clock and elapsed minutes between 3 and 4 o’clock. A small power reserve indicator in the brand’s iconic AUF/AB style (German for “UP/DOWN”) can be found at 6 o’clock. Red highlights are used for the bottom end of the power reserve indicator, as well as the “30” indicator on the minute counter and “12” indicator on the hour counter. A tachymeter scale also runs along the periphery of the dial, allowing the wearer to measure the speed of an object travelling between two fixed points, or distance traveled by an object whose speed is known. 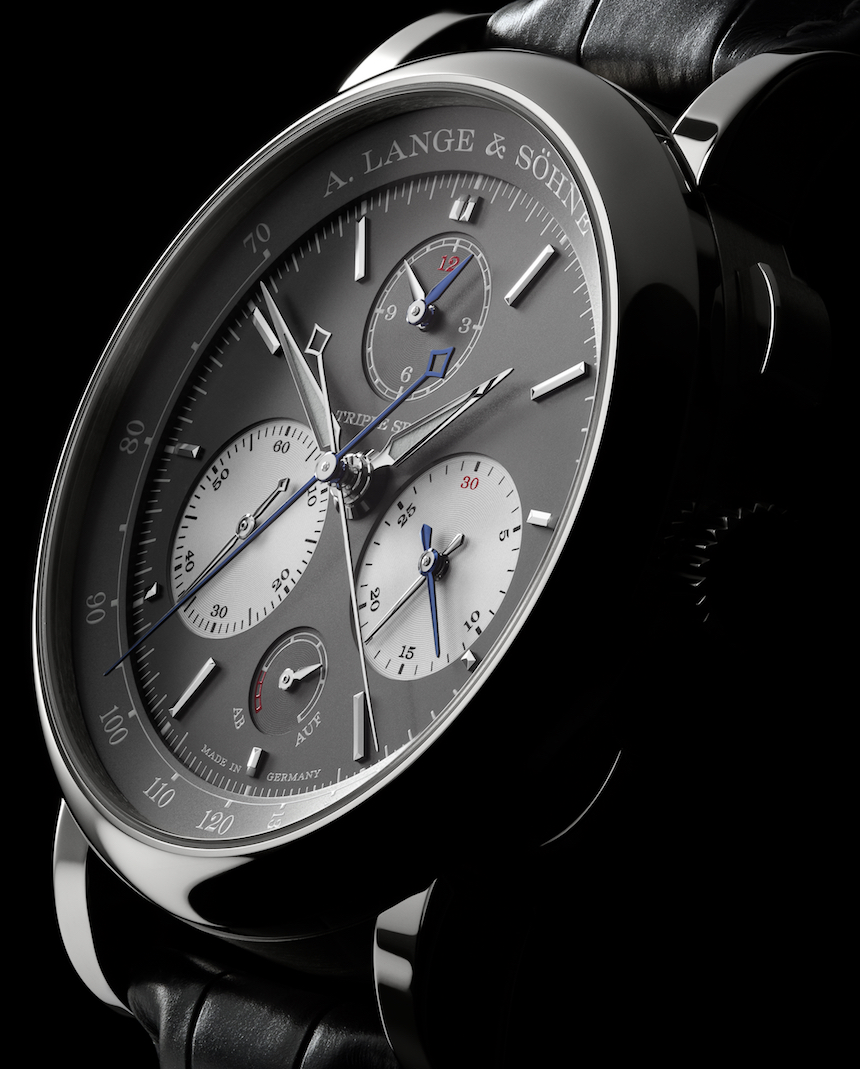 The central hour and minute hands of the A. Lange & Söhne Triple Split are coated in luminescent material to assist with night-time legibility, along with small luminous pips at 3, 6, and 9 o’clock, with a double-pip at 12 o’clock. The hour indicators, central hour and minute hands, running seconds hand, and chronograph minute-counter hand are made of rhodium-plated gold, while the chronograph central second hand, hour-counter hand, and power reserve hands are in rhodium-plated steel. Why the brand chose to use different base materials for these hands is unknown, as visually the rhodium plating will make them all look identical anyway. All three of the rattrapante hands are made of blued steel, which allows them to stand out on the dial and makes reading this complex chronograph much easier. 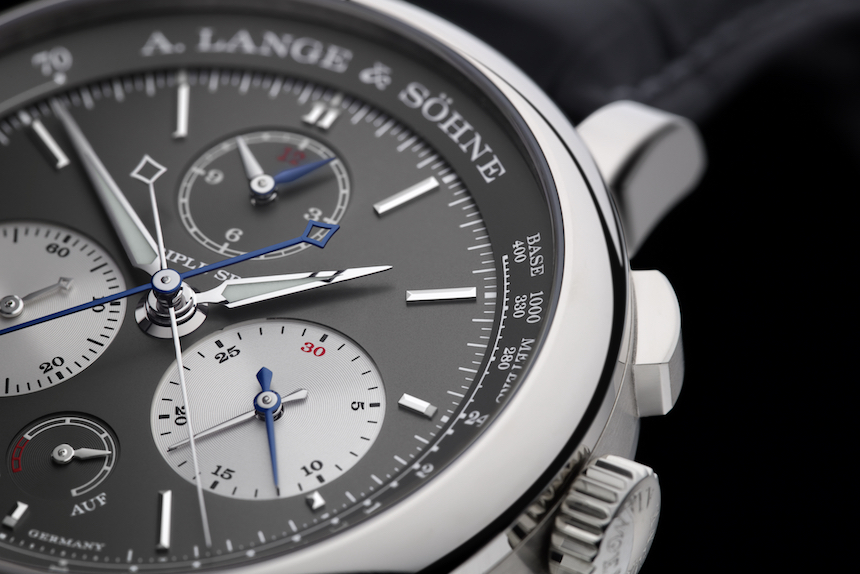 The case of the A. Lange & Söhne Triple Split is made of 18K white gold and measures 43.2mm by 15.6mm, which is only .3mm thicker than the brand’s Double Split watch, a remarkable feat considering the increased complexity of the movement within. No water resistance value has been specified, so prospective owners will need to be wary of water. The short, curved lugs should help this watch hug the wrist, which comes attached to a hand-stitched black alligator leather strap fitted with a deployant buckle in white gold. The watch face and caseback are both covered by sapphire crystal, almost a necessity with one of A. Lange & Söhne’s beautifully finished movements under the hood. 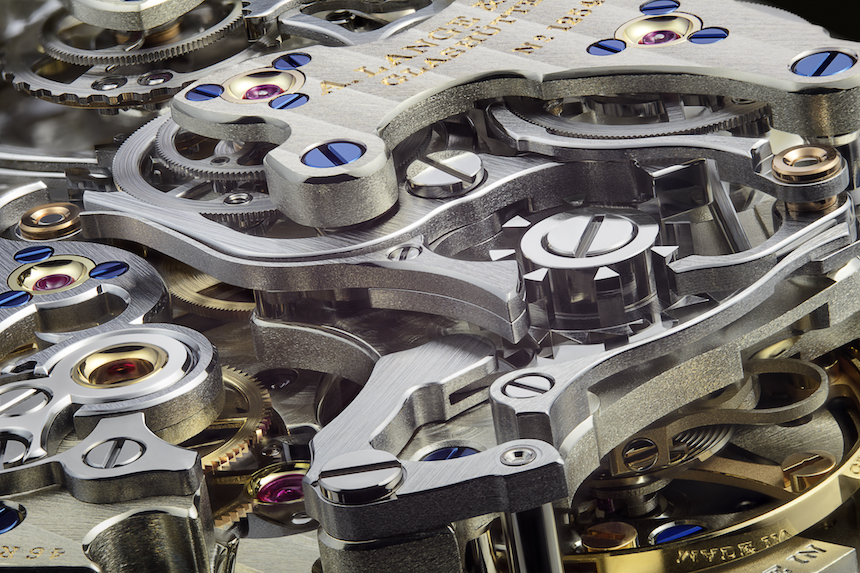 Powering the A. Lange & Söhne Triple Split is the manufacture caliber L132.1, a newly designed movement from the brand. It is manually wound, offers a power reserve of 55 hours, and features a shock-resistant balance with eccentric poising weights for rate adjustment, oscillating at the frequency of 21,600 A/h or 3Hz. The balance spring has been made in-house by A. Lange & Söhne, a feat few manufacturers are capable of. This movement is comprised of 567 components and 46 jewels, making it highly complex; by way of comparison, the brand’s Double Split movement used 465 components and 40 jewels, while the Datograph Perpetual (a perpetual full calendar chronograph, which we went hands-on with here) is still a simpler watch at 556 components and 45 jewels. 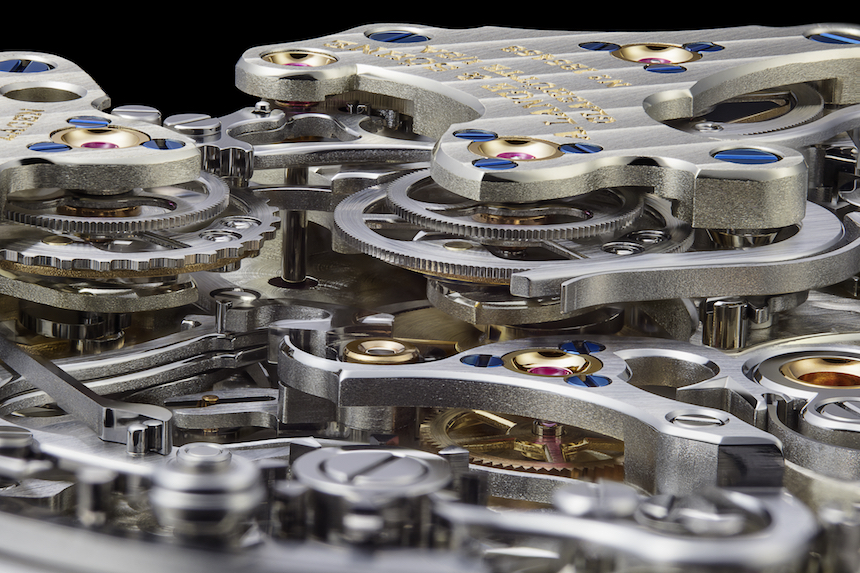 This movement has been adjusted to 5 positions, and also features a kind of “disengagement mechanism” developed and patented by A. Lange & Söhne to prevent loss of amplitude due to the jumping minute counter or when the rattrapante function is activated, helping to ensure the movement’s rate stability. Caliber L132.1 features 5 screwed gold chatons which are visible through the caseback, and the movement’s plate and bridges are made of untreated German silver (also known as Nickel Silver or Maillechort) which will slowly oxidize over time to form a creamy golden patina. The movement has been assembled and decorated by hand, and features the high degree of finishing we’ve come to expect from A. Lange & Söhne, including heat-blued screws, Glashütte ribbing, perlage, and the iconic hand-engraved balance cock. 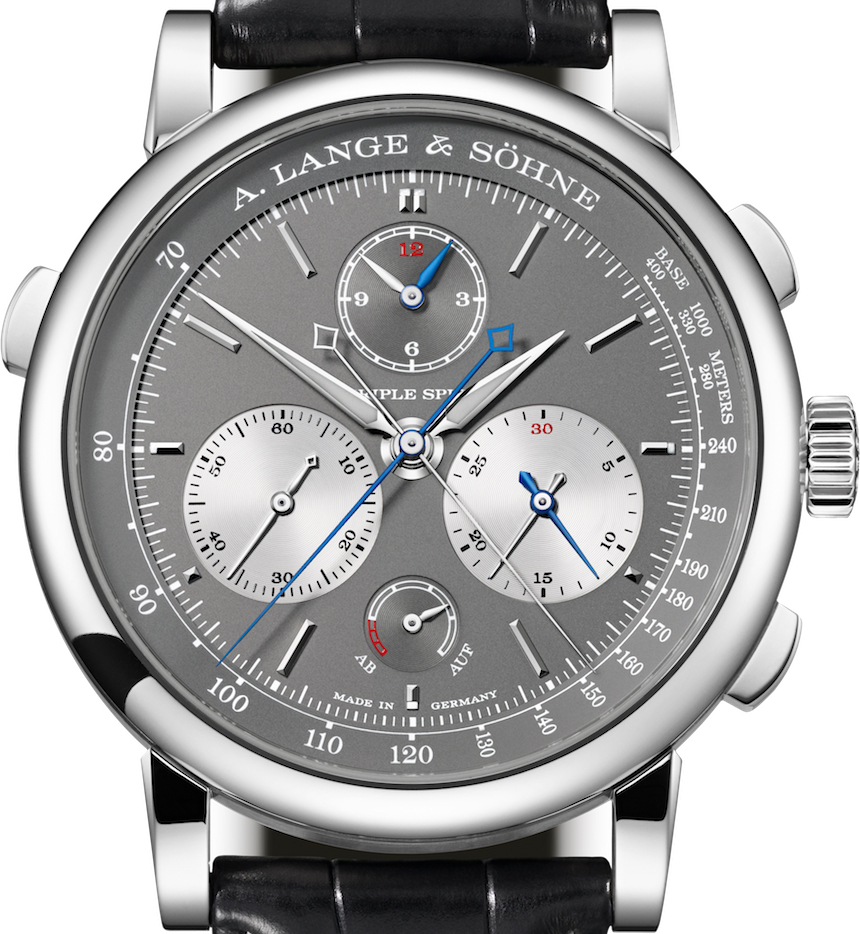 The A. Lange & Söhne Triple Split is without a doubt a phenomenal piece of watchmaking, and demonstrates once again that Switzerland is not the only source for true haute horology. Not only is the A. Lange & Söhne Triple Split equipped with a world-first triple rattrapante mechanism, it also remains balanced and legible despite the wealth of information on offer. Coupled with the view of the highly complex and immaculately finished movement, as well as a somewhat sensible (by complicated Lange standards) asking price of $147,000, I think the brand is onto a winner here. Prospective owners may need to act fast, as this is a limited edition piece of 100 units only. While any price tag north of six figures is normally enough to ensure stock remains available for a while, in this instance I doubt the brand will have much trouble selling out. alange-soehne.com