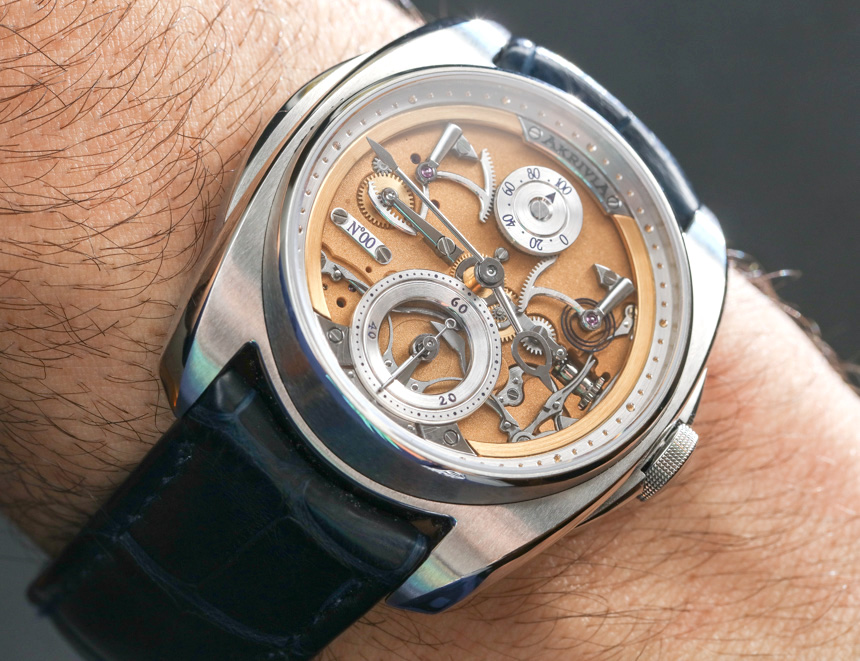 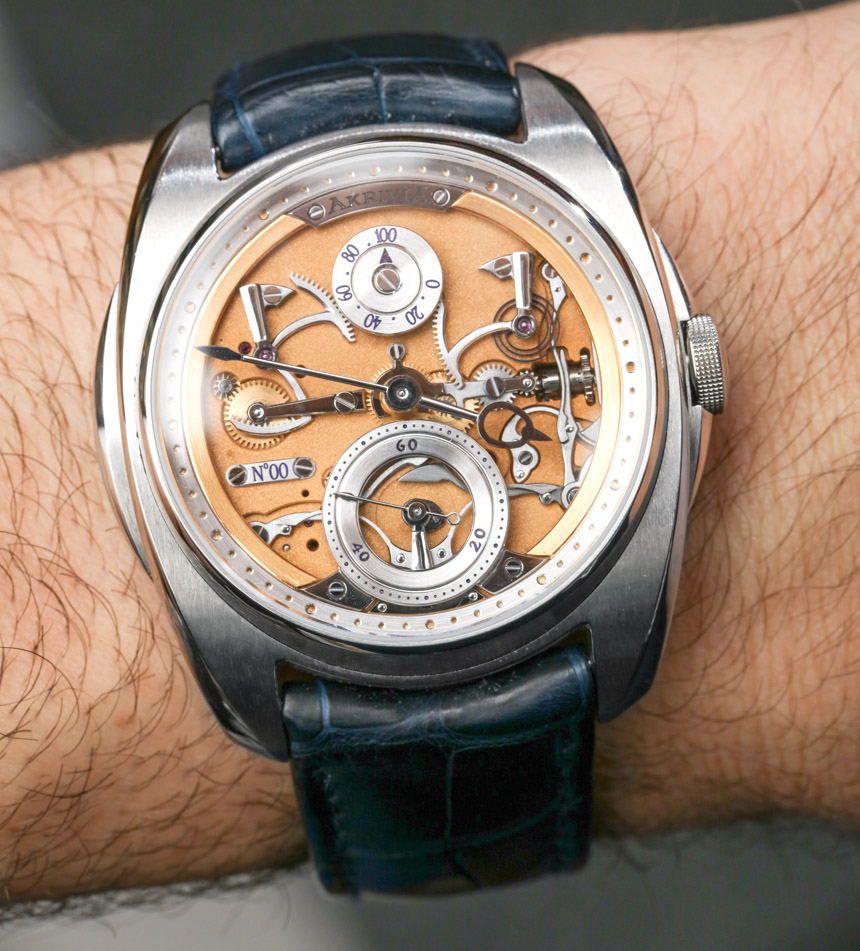 Geneva-based boutique high-end watch maker AkriviA debuted their first non-tourbillon watch at Baseworld 2017, the AK-06. The AkriviA AK-06 might not have the sexiest name, but the watch itself is a lovely testament to our love of individually produced mechanical watches. The movement itself is a minor masterpiece, and I think offering a non-tourbillon watch is a correct move for the small brand. 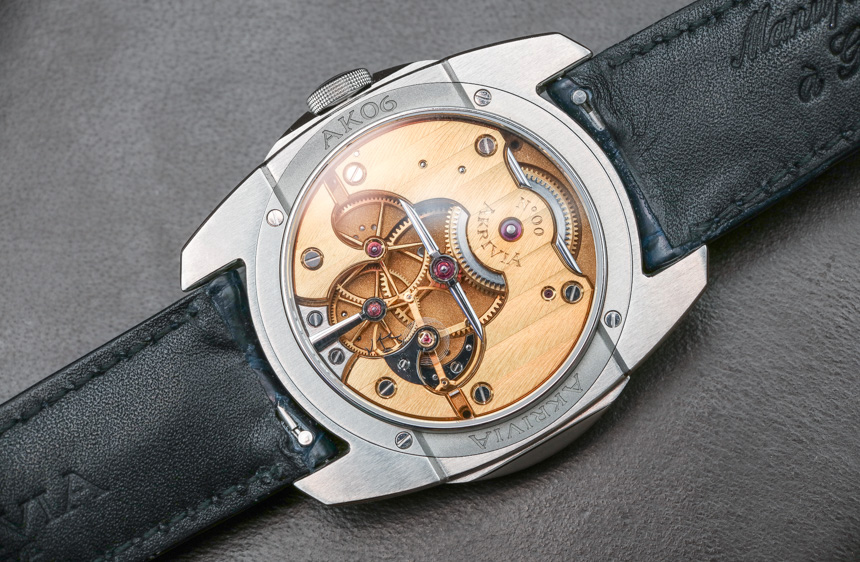 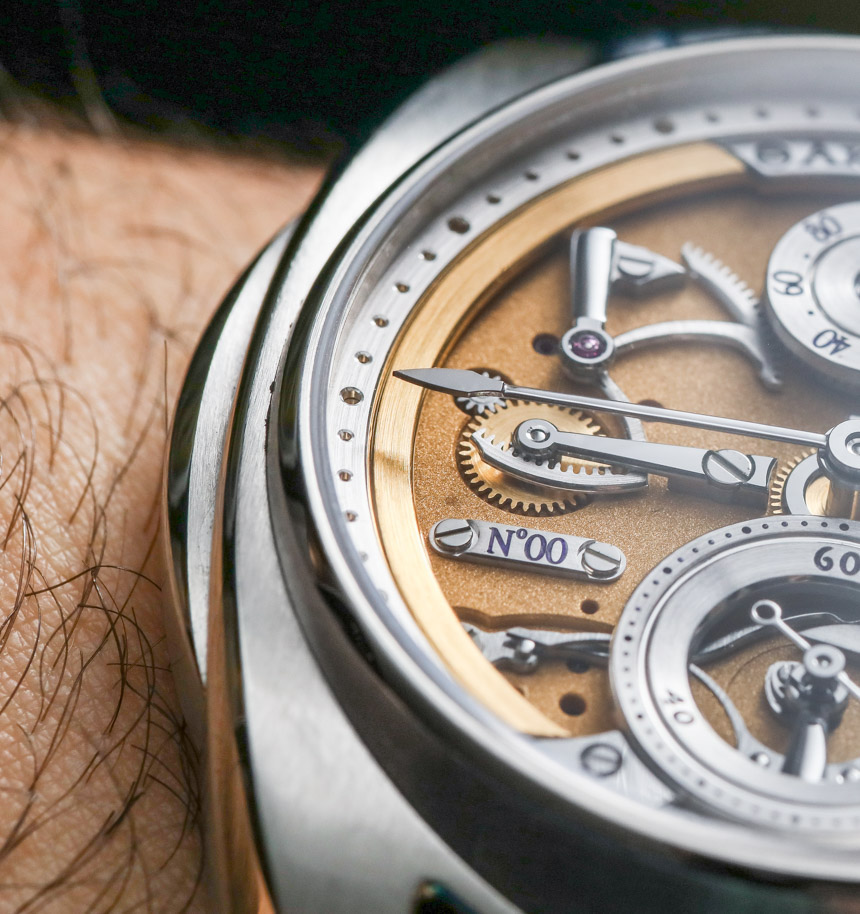 The AkriviA AK-06 will use the same 41mm wide (9.9mm thick) case as other AkriviA watches – which for the AK-06 can be ordered in steel, titanium, 18k rose gold, or platinum. Given that each watch is made one at a time, the case as well as the movement finishing and style can be thoroughly personalized. This is important to mention because when you order a watch like this, as a consumer you are almost obligated to make some decisions on how you want it to look. As a real collector’s watch, it should be further designed to meet the tastes of the owner. 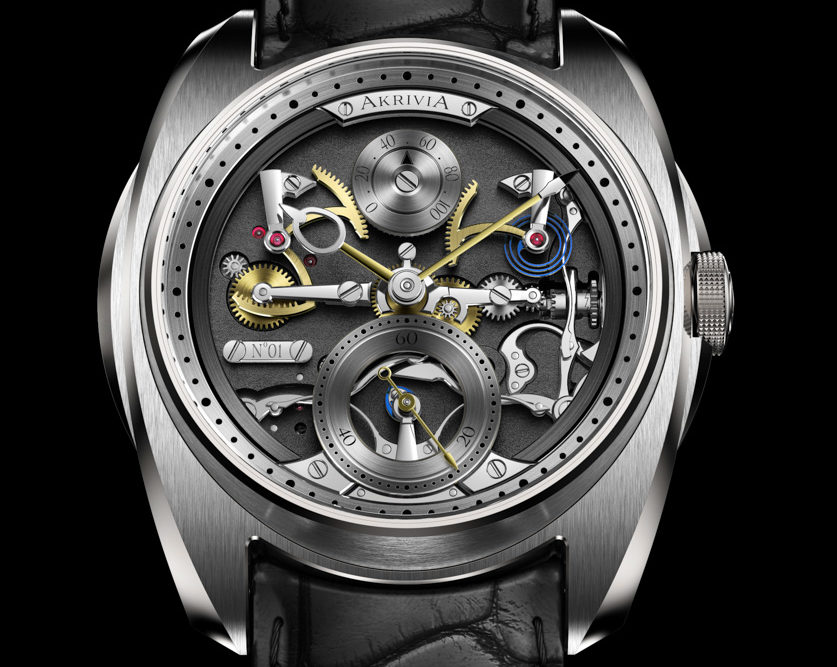 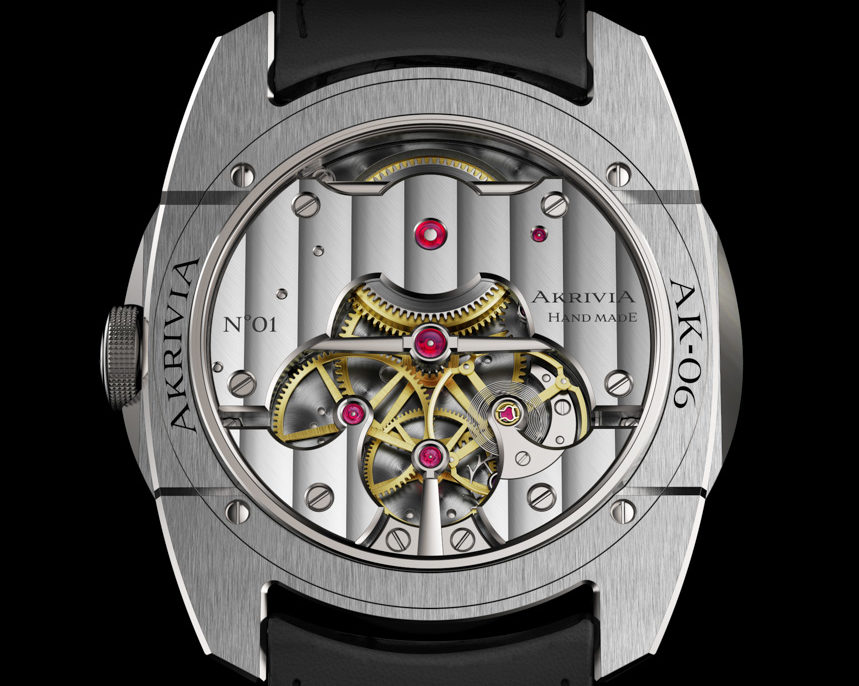 Pretty much everything about the caliber AK-06 movement is designed to be aesthetically appealing as well as functional. The nicely balanced dial view of the movement features a cleverly arranged layout of the major movement parts, while allowing the balance wheel to remain on the back of the watch. The dial and case back side of the AK-06 movement is impressive, as well as visually distinct. There is a sort of welcome steampunk vibe to the dial design, which is benefited by the various colors and shapes that all add visual interest. Watchmaker and AkriviA founder Rexhep Rexhepi really went all out to ensure that his most simple watch is also arguably his most beautiful to date. This is also arguably one of the most important and desirable new watch movements of 2017. 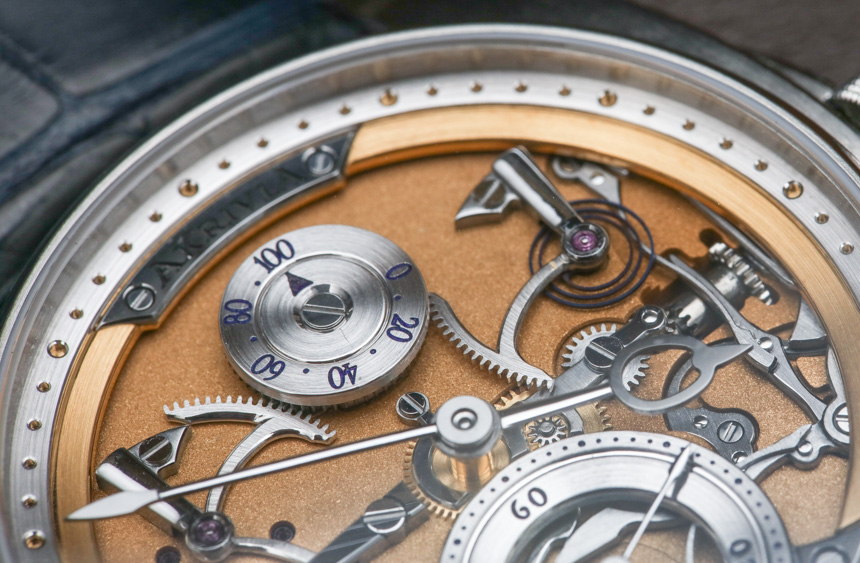 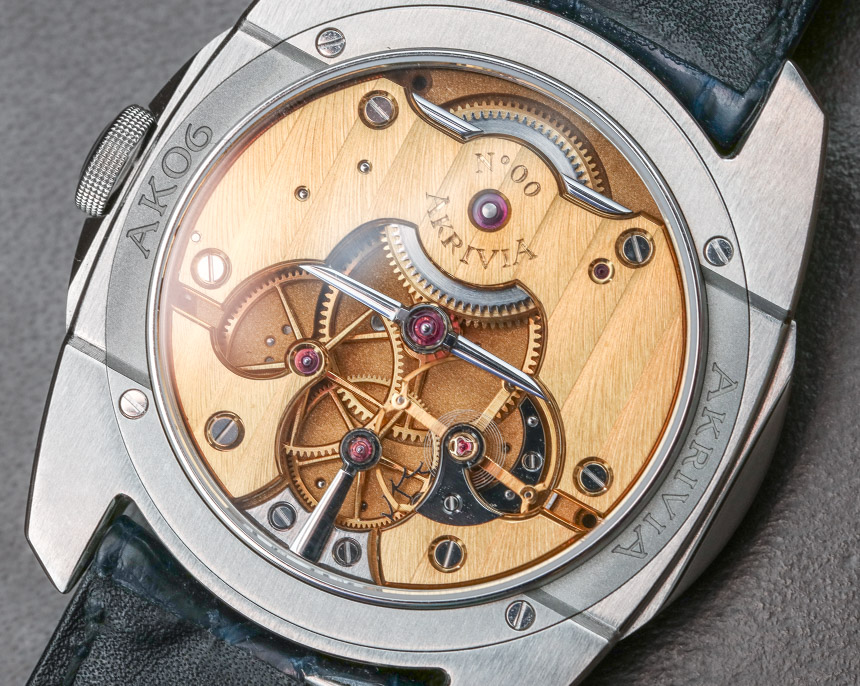 The AkriviA AK-06’s rear is the most traditional looking part of the watch, which sets it apart from the dial considerably. AkriviA clearly wanted to emphasize symmetry in the design, which is achieved very nicely overall. A bridge runs through the center of the movement, while the regulation system is just below it and to the right, with a running gear to its left to visually balance things out. Thick Geneva stripes run up and down the movement plate and the hand-finishing is just excellent. 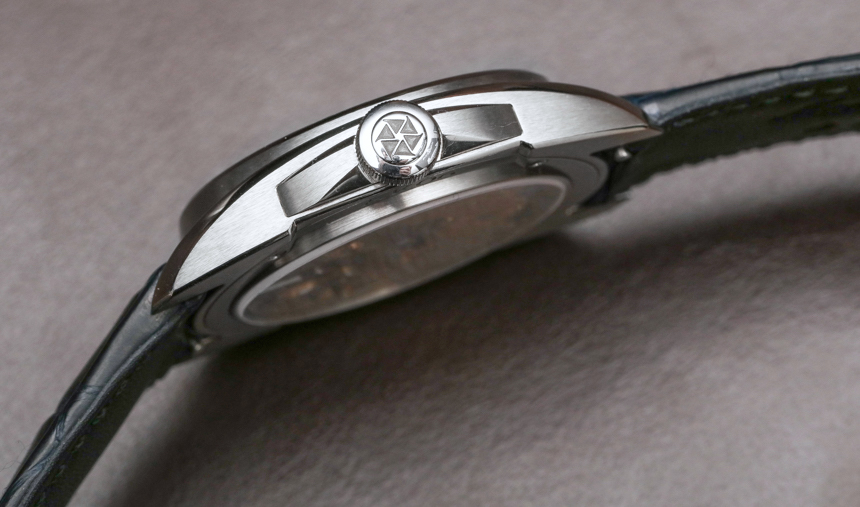 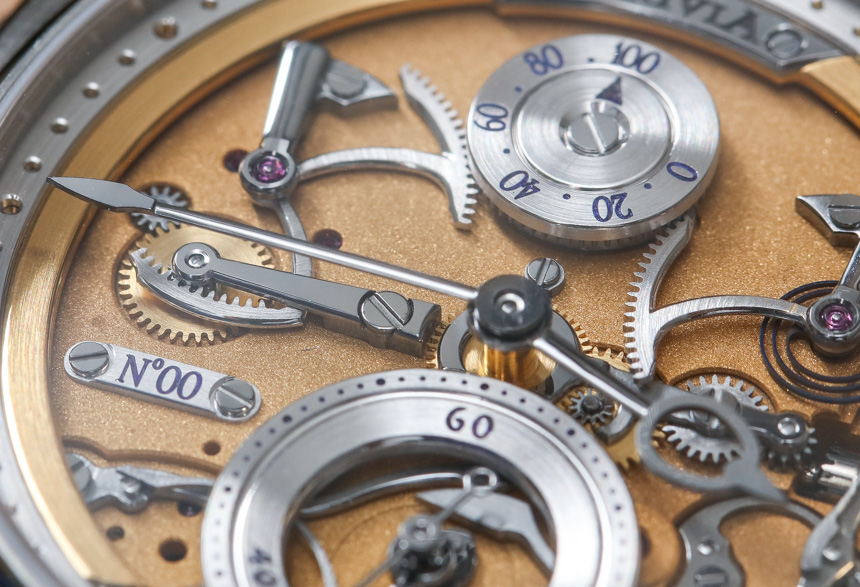 Functionally, the AK-06 movement is simple and to-the-point but has some nice features to it. AkriviA made it clear that it wanted the AK-06 to not only look nice, but also focus on reliability over time as the 100-hour power reserve (seen at 12 o’clock) winds down. The manually wound movement has an interesting type of power reserve indicator which uses a turning disc in a way that I find very appealing. This is also because you can clearly see the system that allows the power reserve indicator to work. 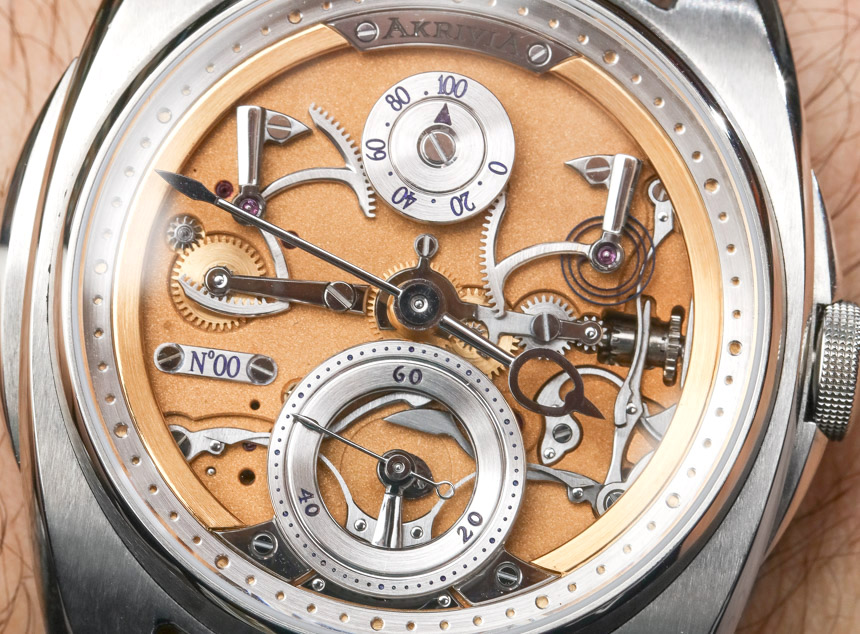 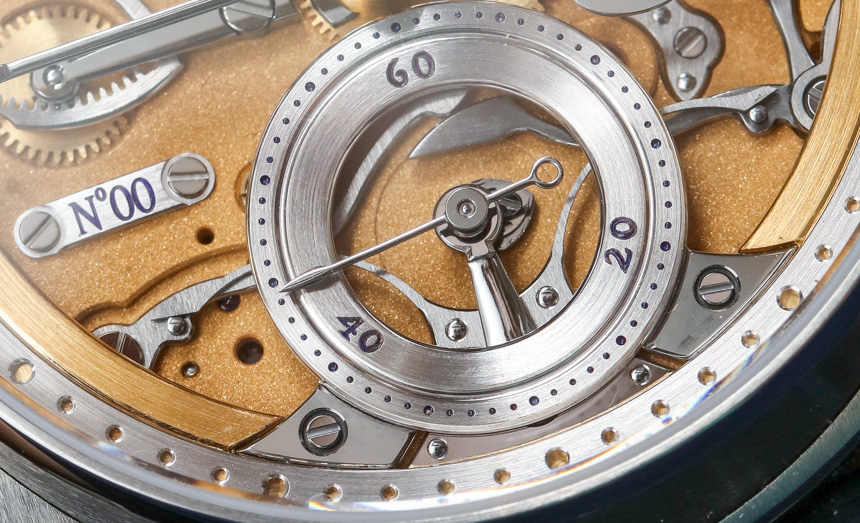 The movement also indicates the time with a subsidiary seconds dial. Note that on this particular model I photographed, the hand-made hands are not final – as their center staffs will be blued. A useful feature in the AK-06 movement is a zero-reset and hacking seconds mechanism. That means when you pull the crown out, the balance wheel not only pauses, but the second hand automatically resets to zero to make setting the time more precise. This isn’t the first time I’ve seen such a feature, but it is extremely rare and I’ve only seen it before on German watches in a modern sense. 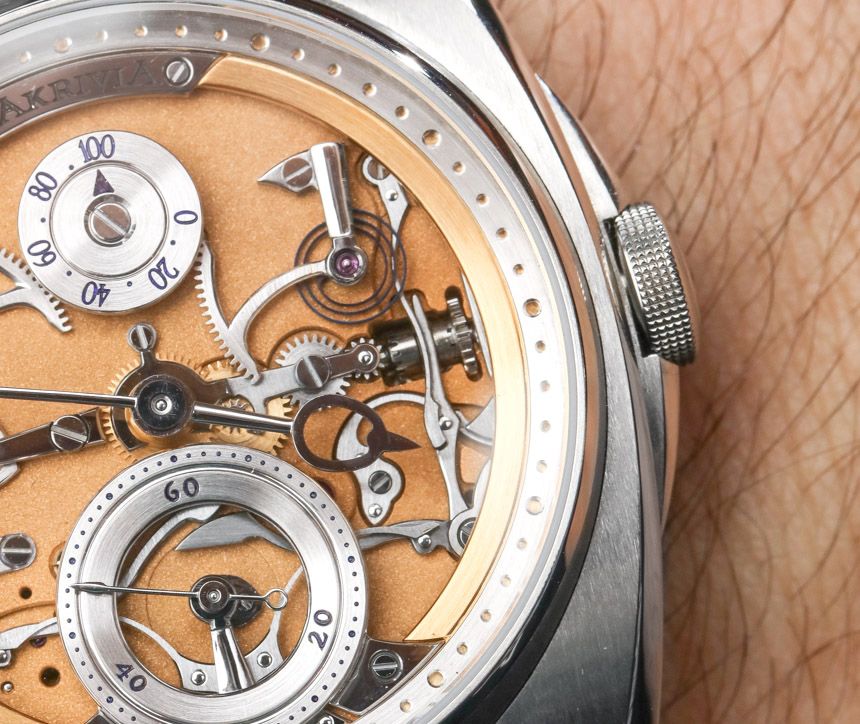 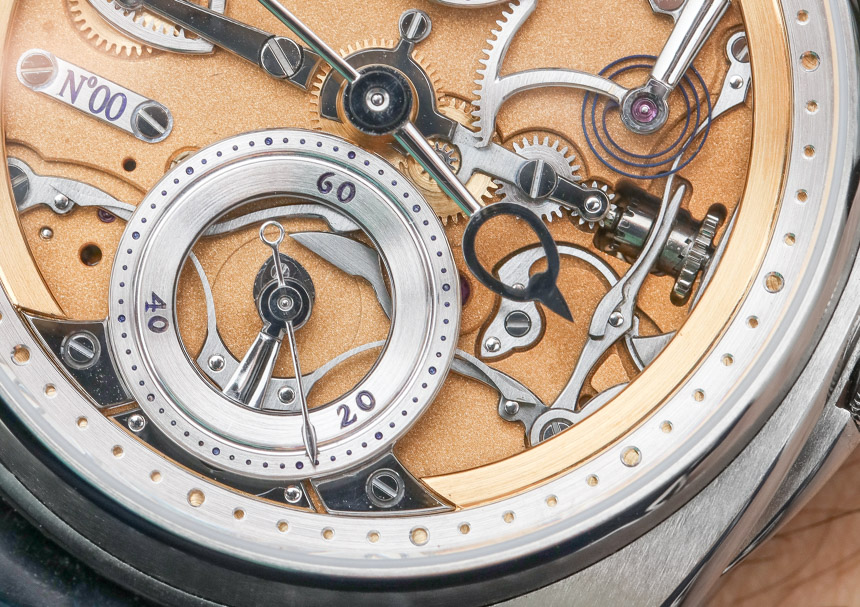 Looking closely at the seconds hand on the skeletonized dial, you can see the heart-shaped cam which is part of the zero-reset feature. For those who love mechanical watches, the AkriviA AK-06 really does offer a visually pleasing and contemporary view of what is essentially a very traditional item. What I like most about these types of movements is that they are designed from the ground up to be attractive as well as functional. It is one thing to decorate an industrial watch movement as best as you can, but it is an entirely different thing to wear a movement that has been designed without mass production in mind, one which exclusively celebrates the art of watchmaking. 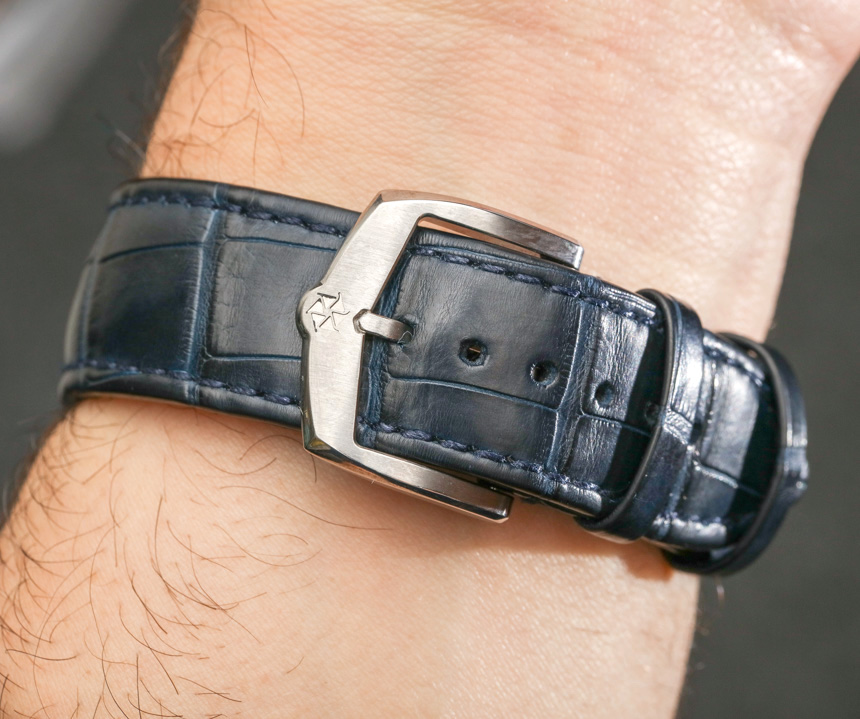 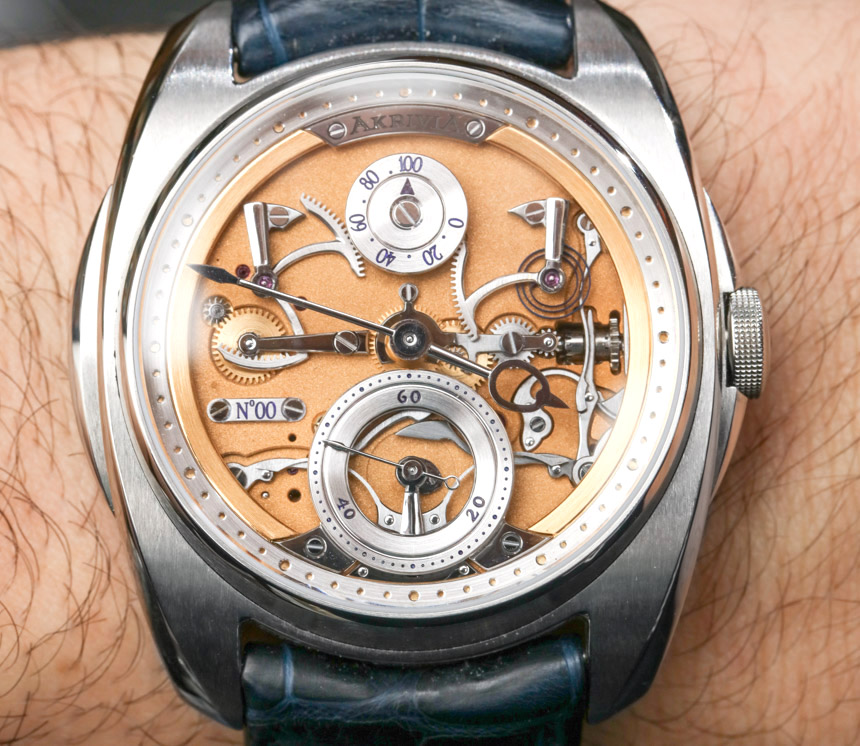 With handmade movements produced one at a time in Geneva by Rexhep and his very small team, timepieces like the AkriviA AK-06 will be valued for their quality, decoration, and exclusivity. It is impossible to easily compare watches such as this to other pieces, but if you want a truly modern watch, from Geneva, that is very traditional in its approach to watchmaking, AkriviA is easily one of your best bets. Price for the AkriviA AK-06 is 79,000 CHF in steel, 83,000 CHF in titanium, 87,000 CHF in 18k rose gold, and 91,000 CHF in platinum. akrivia.ch