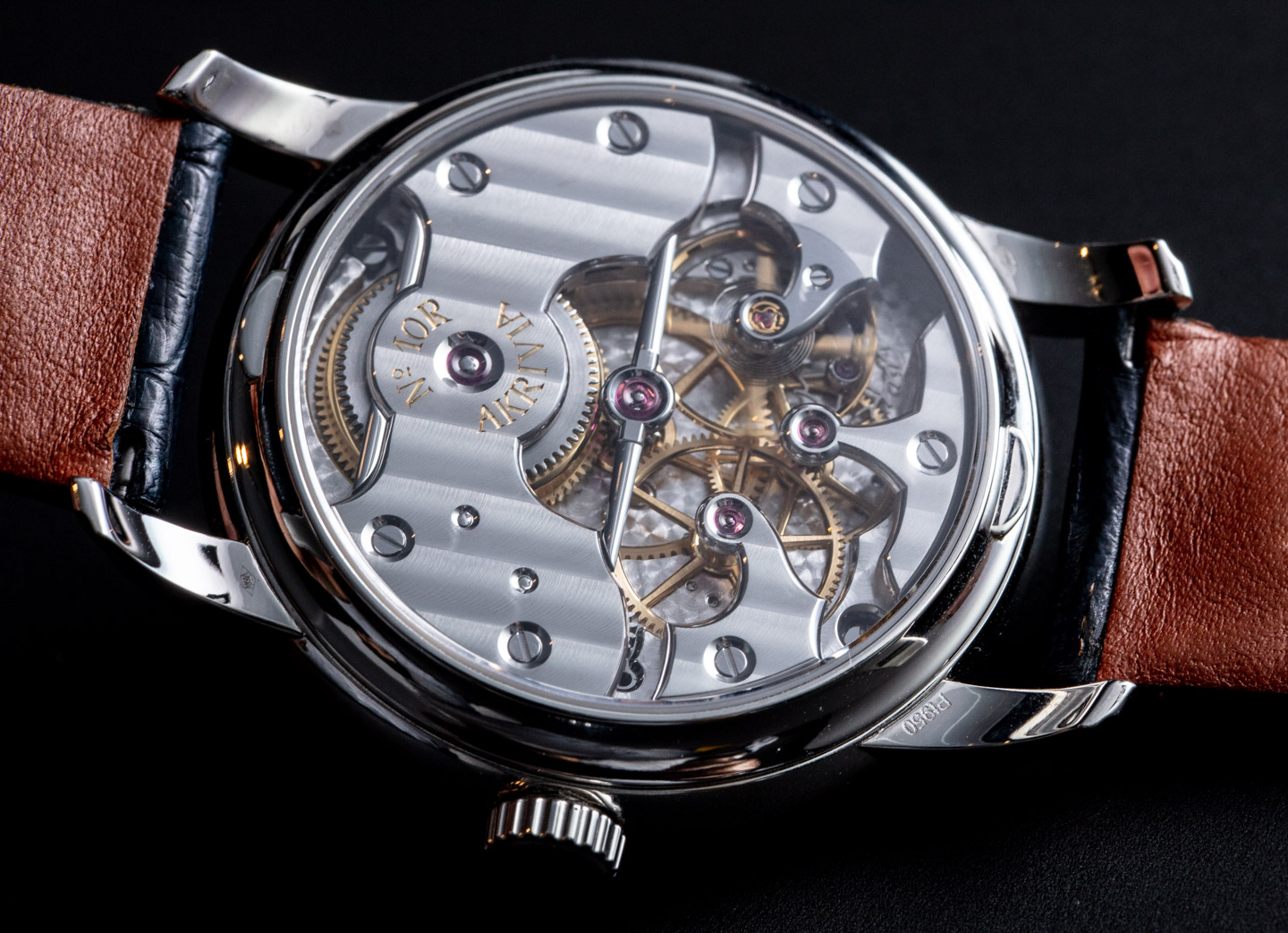 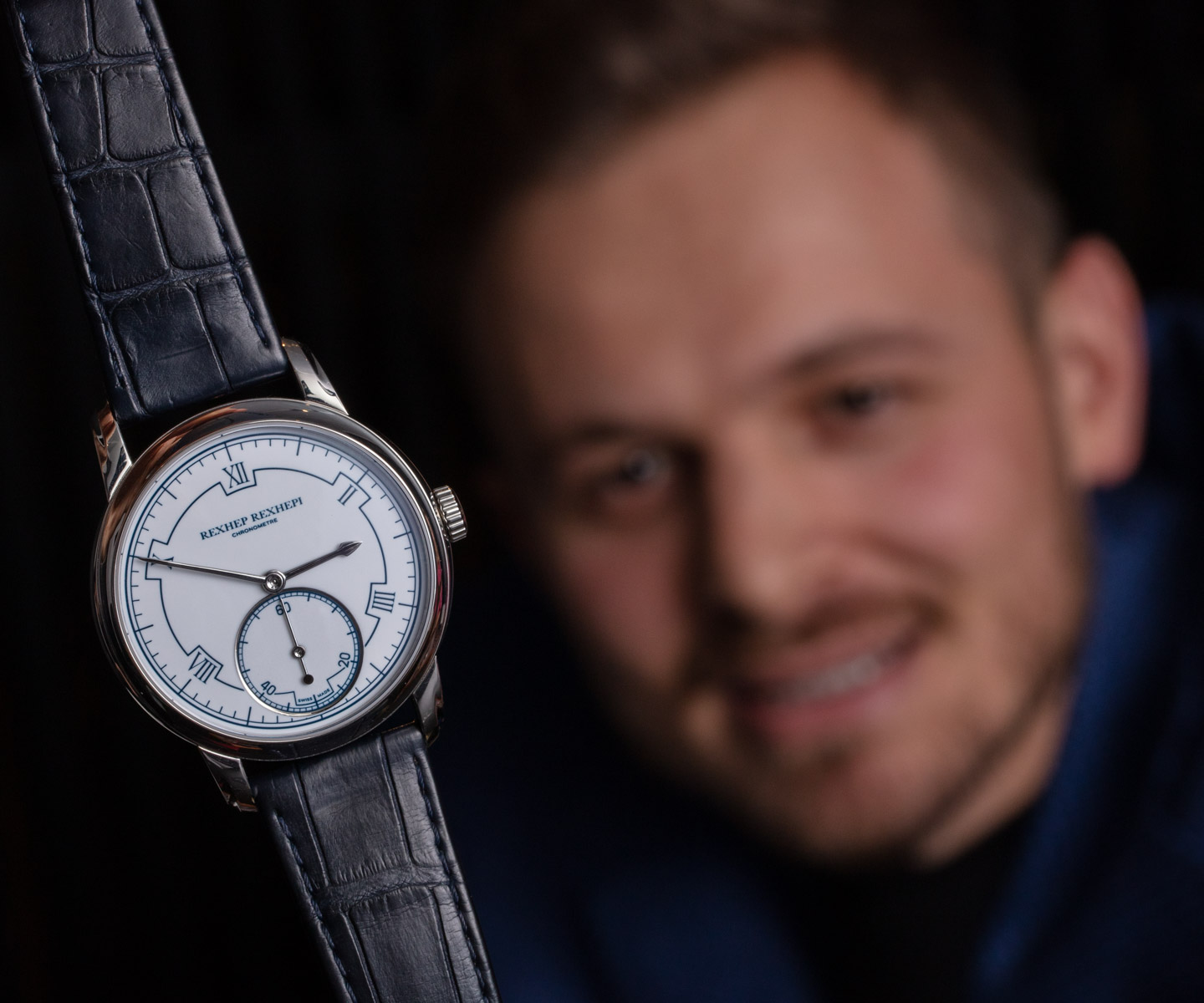 Rexhep Rexhepi is the type of independent watchmaker you probably want to do business with if you are looking for an elegant handmade dress watch with a lot of effort in aesthetic refinement, as well as movement finishing. This particular watch is an interesting evolution of the still-young watchmaker’s career, which is inspired by his love of military “officers’ watches” from the 1940s. Rexhep has now entered the phase of his “brand” where nothing but his name on the dial will really suit. Welcome the entrance of his eponymous Rexhep Rexhepi watch label. Though Rexhep of course still mainly focuses on his Akrivia brand, I don’t think this Rexhep Rexhepi Chronometre Contemporain is a one-off idea.

Let’s be frank that Rexhep is following in the path of others (notable characters like Francois-Paul Journe from his own city of Geneva) who have themselves found success in brands that feature their own name. This isn’t an accident. Outside of special situations such as Rolex and Omega, most classic or legacy watch brands are just names of people. They aren’t adjectives, names of places, or “cool-sounding” words. Of course, there are always some exceptions, but if you want to be an Audemars Piguet, Patek Philippe, Louis Vuitton, Panerai, Richard Mille, Breuget, etc… you’ll want a name(s) as part of your…. name.

The Rexhep Rexhepi Chronometre Contemporain fits within the current trend and is the most simple (in complexity) watch produced by Akrivia, right now. The movement is hand-wound and features only the time. The appeal in the Chronometre Contemporain is in the mechanical design and hand-finishing, the distinctive take on the classic dress watch dial, to a degree the case material, and the fact that timepieces such as this are inherently limited in their production.

Rexhep calls the Chronometre Contemporain a “neo-classical” design. That means the design is original but is meant to fit the form of today’s popular classic watches that a number of elite collectors enjoy. Here, we see the Chronometre Contemporain in its 950 platinum form, but the watch is also available in 18k rose gold with a black dial. The case is 38mm-wide and 9.5mm-thick (water-resistant to 30 meters) with a sapphire crystal over the dial, as well as the caseback. 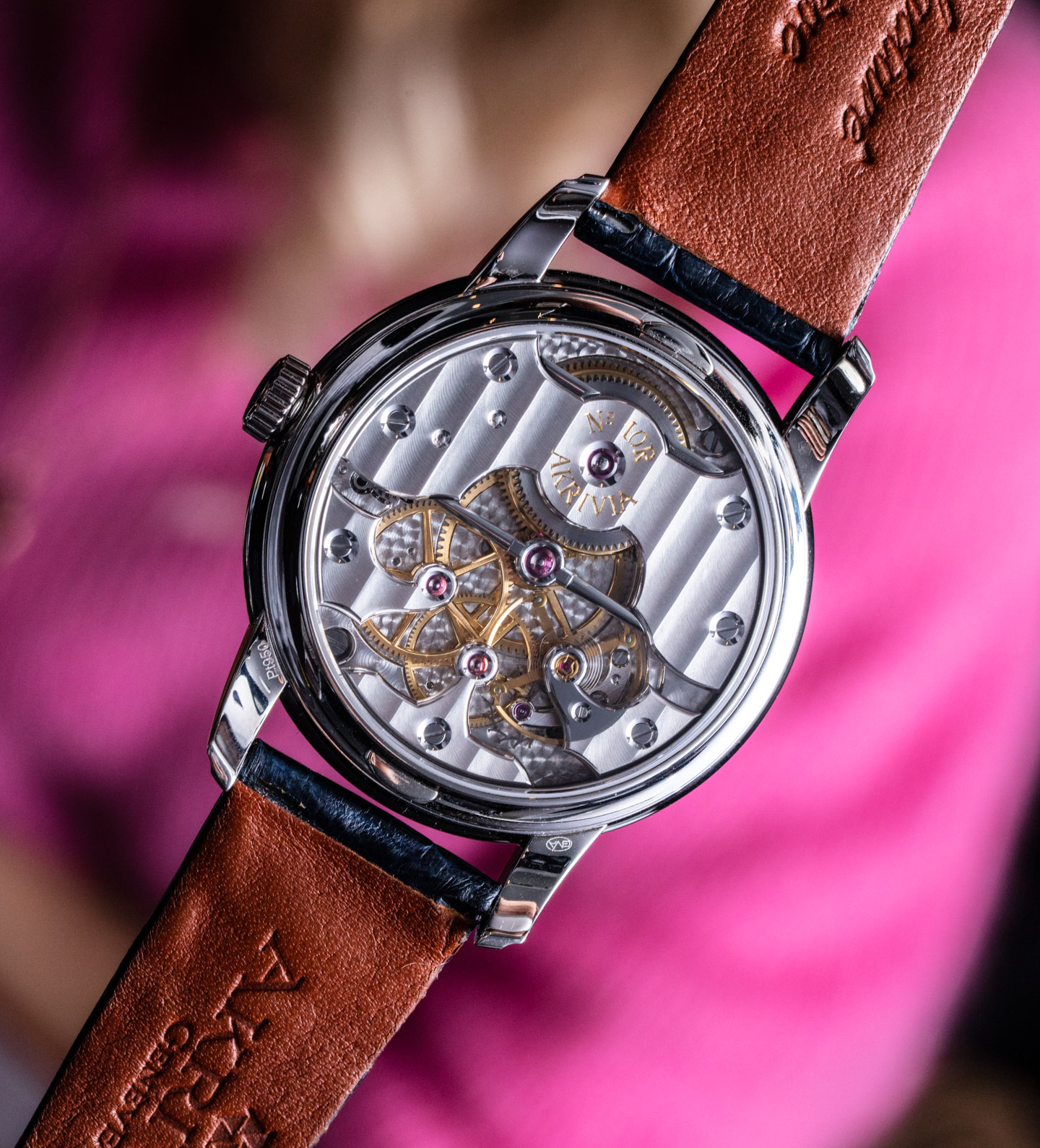 The Rexhep Rexhepi Chronometre Contemporain dial is in traditional grand feu enamel with blue print on it and matching 18k white gold hands. The hands are hand-polished, as well, and look so nicely done you’ll never want to look at overly shiny machine-polished hands ever again. For the most part, the Chronometre Contemporain watch is highly conservative, but there is a lot of character in small bits in places, such as the style of the dial and the lovely symmetrical curves of the movement.

Inside the Chronometre Contemporain watch (it doesn’t actually come with a COSC Certificate by default, but for a bit extra you can order one with the watch) is what Rexhep calls his caliber RR-01 movement. The RR-01 is totally developed in-house and is a chronometer-style movement in the traditional sense. It also has a “stop-seconds” feature. The simplicity isn’t about making it low-cost but rather so as to minimally interfere with performance areas such as chronometry and isochronism. That means each RR-01 movement is capable of operating with COSC Chronometer spec and also happens to have utterly lavish decoration. These things do not always go hand-in-hand. 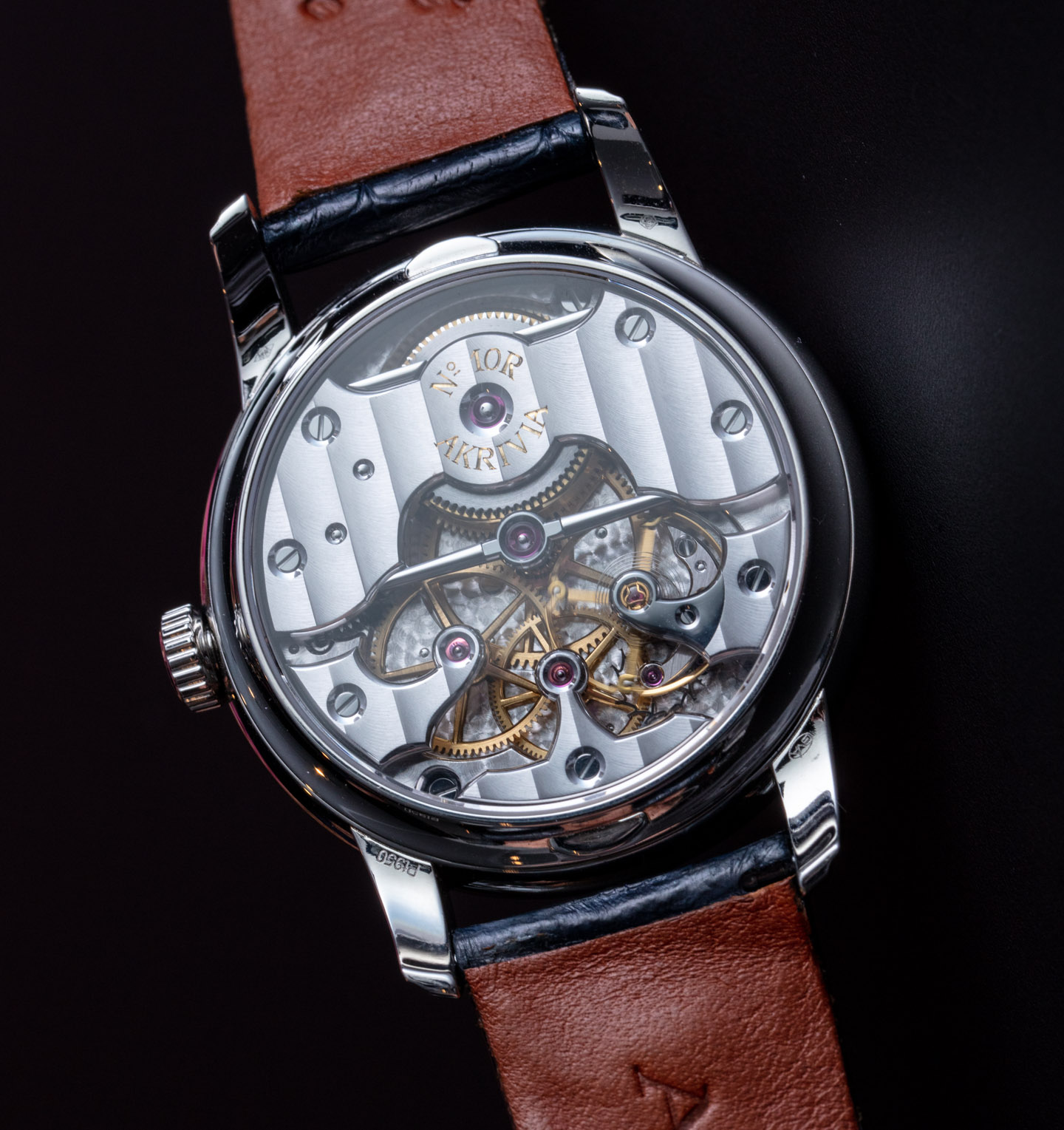 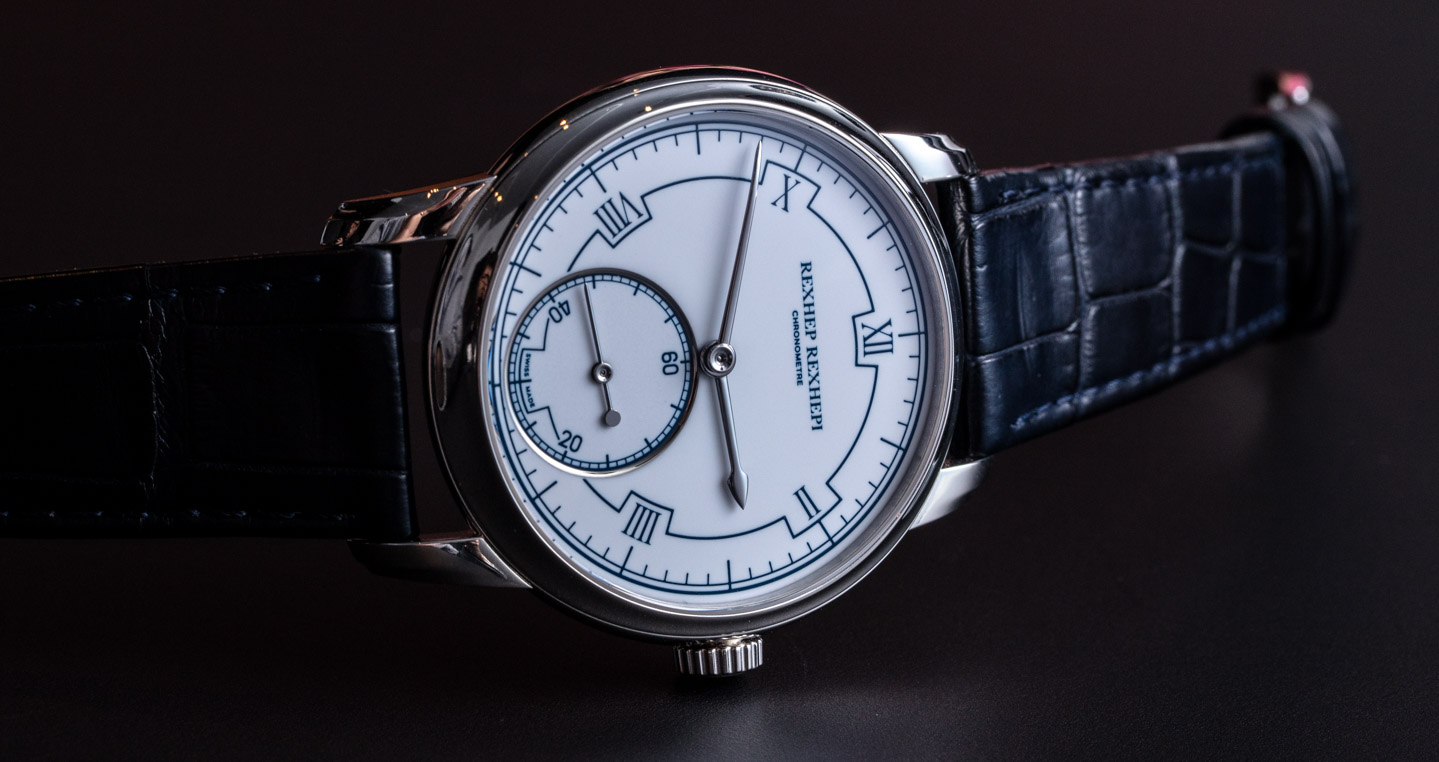 The RR-01 movement has an interesting architecture that I’ve not seen before – though it does clearly fit within the mold of what Akrivia does — where symmetry in design is often very important. The RR-01 has a well-secured mainspring barrel at the top with a power reserve of about 100 hours. The free-sprung balance wheel is opposed by one of the main running gears — which is a very interesting way of creating visual balance, especially considering how, for the most part, the balance wheel in movements is the most visually eye-catching element. In the RR-01, it isn’t. That said, watchmakers like choosing a lower frequency for some movements like this since the slower speed of the balance wheel is more visually calming to the eyes.

The large bridge across the movement isn’t for the 2.5Hz (18,000 bph) regulation system, but rather for another of the gear train wheels. If anything, this movement should offer some excellent shock resistance. It is really nice to see not only an interesting-looking (and well-made) in-house movement but one that actually seems to care about being thoroughly well-engineered and intended for performance. 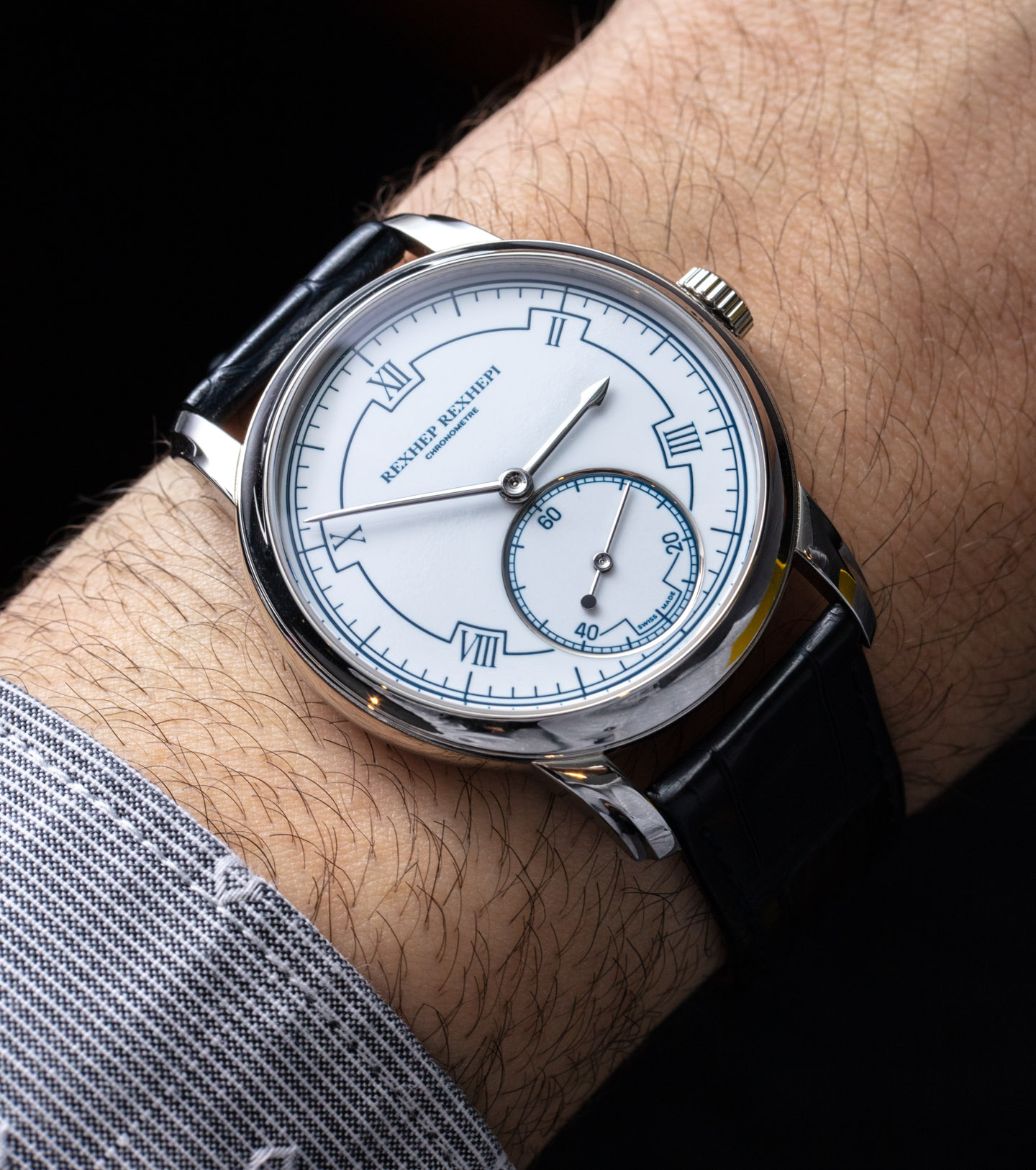 Dress watches like this deserve a place in everyone’s collection. Clearly, not everyone can afford a high-end luxury such as this, but in a lot of ways, watches like the Chronometre Contemporain make more sense than a showy tourbillon (although Akrivia makes those, as well). Timepieces such as the Philippe Dufour Simplicity helped prove that there is a lot of love for exceptionally well-made watches that focus on doing just one thing really well. More so, you can easily collect and enjoy something like the Rexhep Rexhepi Chronometre Contemporain one day, and then switch over to something with a doze complications the next day — but people who end up wearing comfortable to live-with watches such as this tend to give them a fair bit of wrist time.

According to Rexhep Rexhepi, the Chronometre Contemporain watch still takes a few months to fully produce — which includes taking into consideration all of the parts as well as the decor, assembly, and testing. The watches are also a relatively good deal considering that the namesake on the watch is still actually behind the production. I think, for a while, Rexhep Rexhepi will continue to produce both Akrivia watches and eponymously titled ones. My curiosity will be about how he channels his creativity and time between the two. Price for the Rexhep Rexhepi Chronometre Contemporain watch (which, according to the brand, have all been sold out) was 57,500 CHF in 18k rose gold and 59,500 CHF in platinum (as pictured). Learn more at the Akrivia website here.