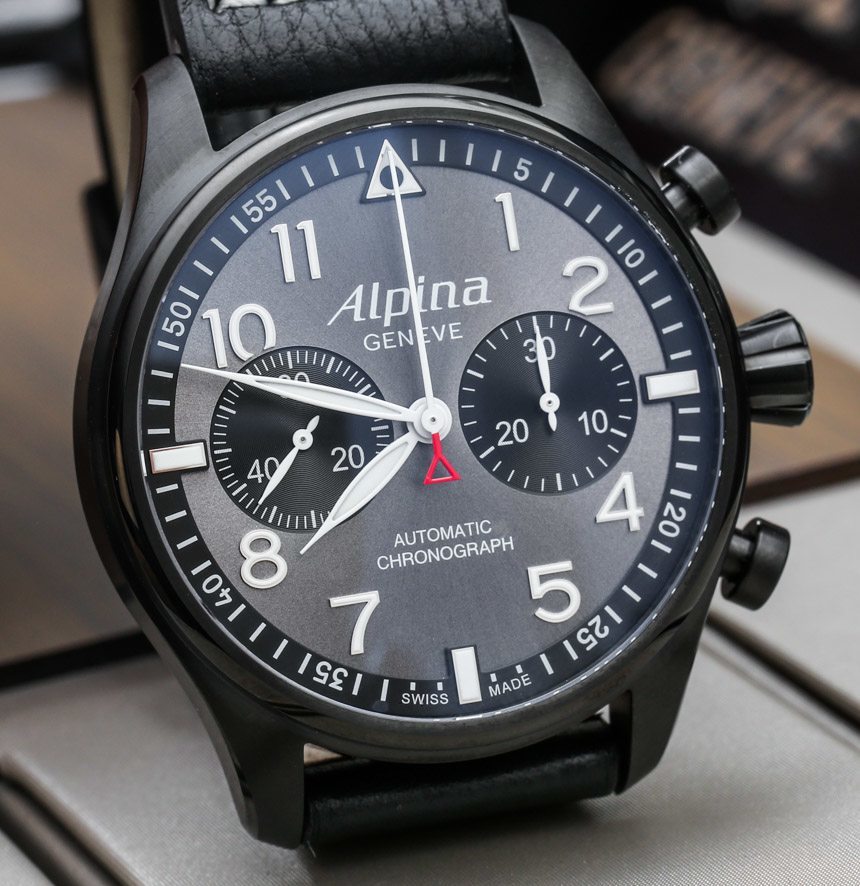 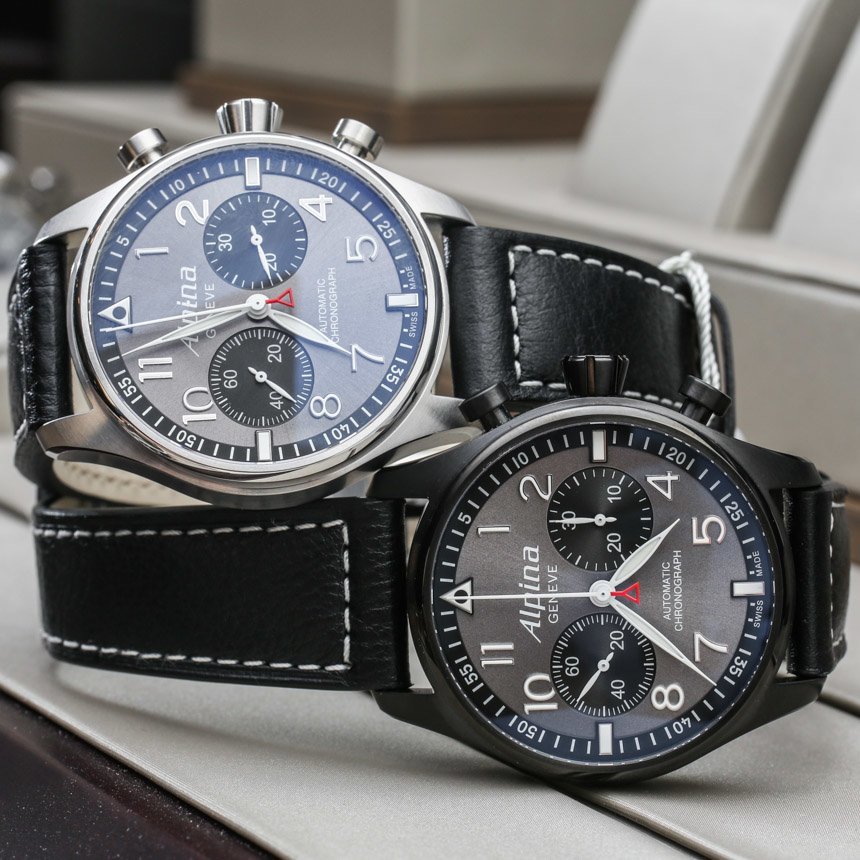 Before discussing some of these rather nice Alpina Startimer Pilot Automatic watches, I want to once again discuss the notion of pilot watches overall. People often ask us about brands that offer reasonably priced pilot-style watches. It is honestly a good question, and one that we struggle to answer. One of the reasons for that is that it is often difficult to strictly define what a pilot watch is, as the concept is a bit more fluid than say the more specific requirements of a dive watch. Second is the notion that what “reasonably priced” means can really vary. You can get a pilot-style watch for a few hundred dollars, or you could spend in the tens of thousands (or more). So let’s focus for now on the concept of a reasonably priced mechanical pilot watch with a Swiss movement. Among the more established brands, Alpina actually has very decent offering. 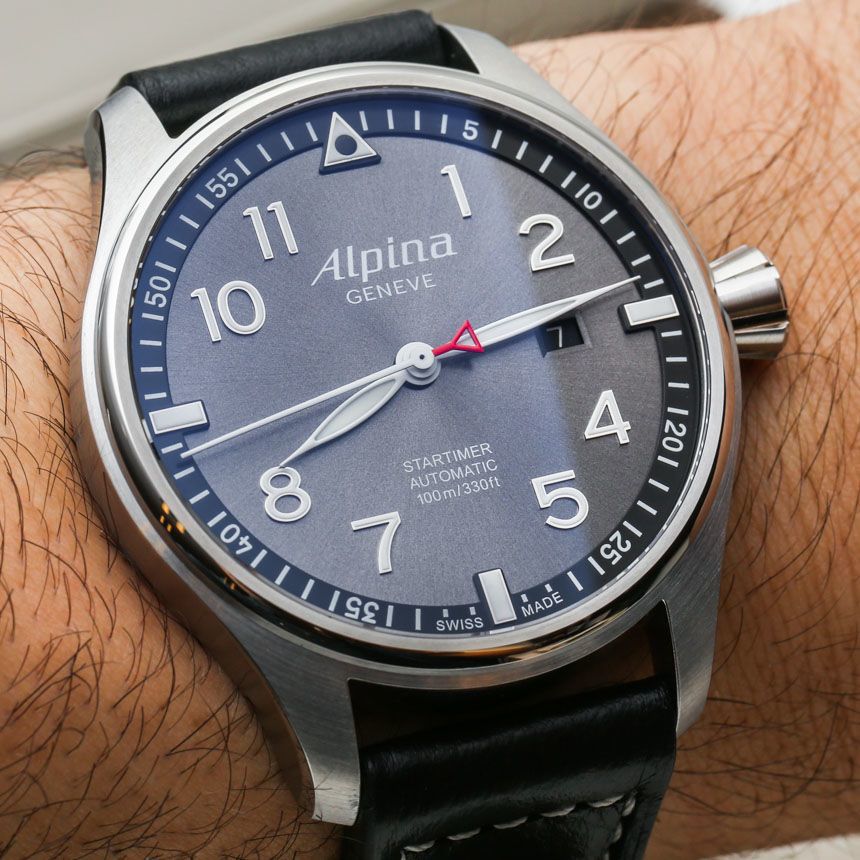 Alpina pilot watches are segmented into a few categories, all under the larger Startimer collection. It can actually get a bit confusing, as you have the Startimer Pilot Automatic, Pilot, Pilot Manufacture, Pilot Classic, and Pilot Heritage product ranges. For now, I’ll stick to talking about some Alpina Startimer Pilot Automatic watches, as that is what you’ll see pictured here. These each contain Swiss automatic movements produced by third parties such as Sellita. The Pilot Manufacture collection, by contrast, has movements made by Alpina (and parent company Frederique Constant), and collections like the Pilot have Swiss quartz movements in them. 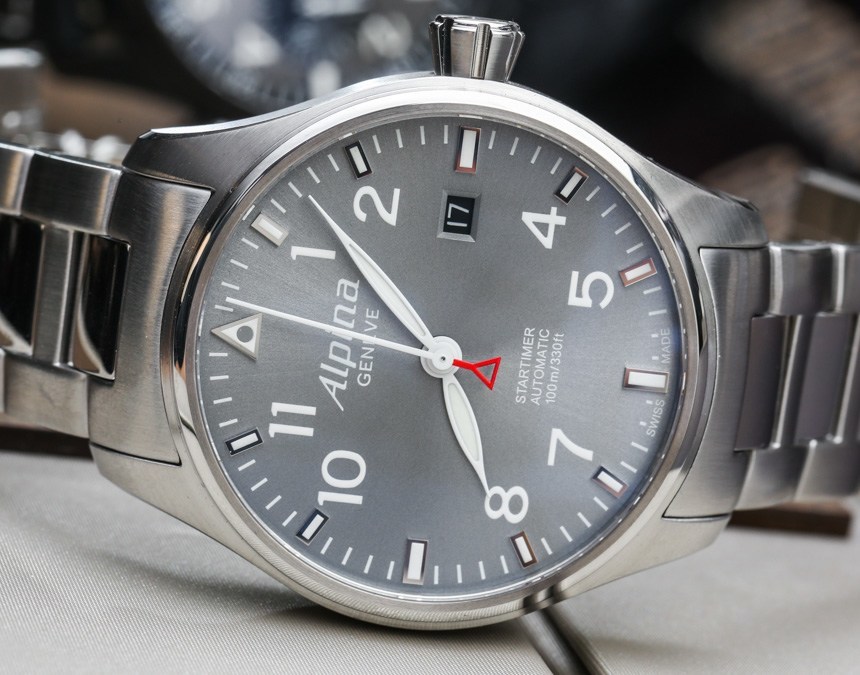 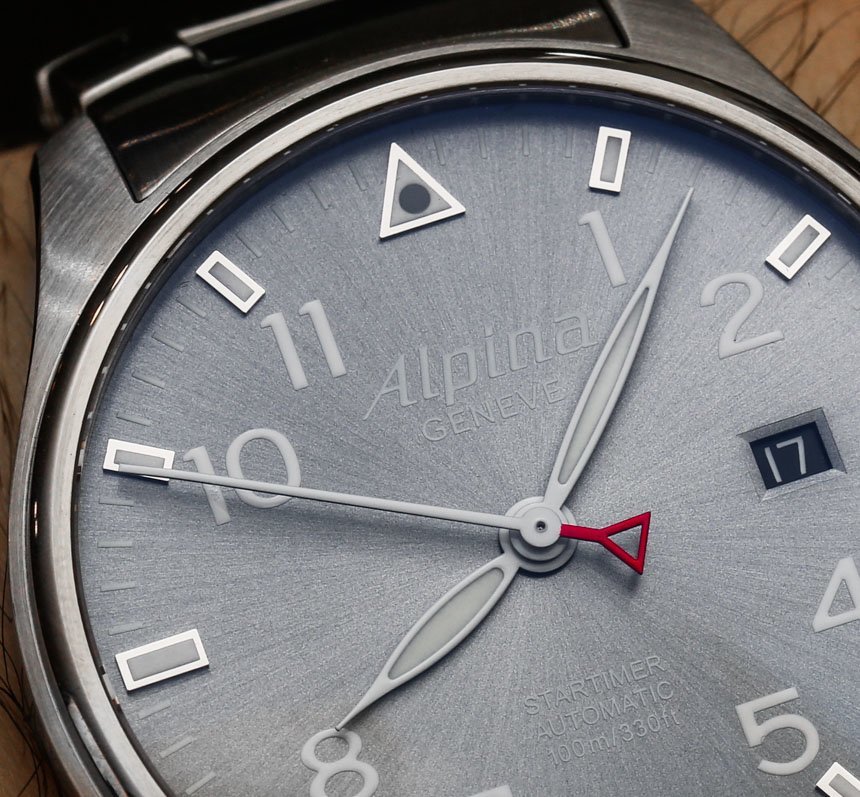 I’ve seen Alpina’s Startimer Pilot watches evolve over the years and think that they have hit a positive stride by this point. Detailing and legibility are good, and the overall presentation of the timepiece is just really attractive, with a lot of options available. In a nutshell, you have a solid traditional Pilot watch style, with a bit of Alpina design DNA, at comparatively reasonable prices. Prices for a 40mm wide Alpina Startimer Pilot Automatic on a strap start at about $1,300, and case sizes are available in both a 40mm wide, as well as 44mm wide.

In addition to the three-hand automatic, we also have bi-compax automatic chronograph models. It is sometimes hard to do a chronograph with the traditional pilot watch dial, but I think Alpina does it pretty well in the Alpina Startimer Pilot Chronograph. The Alpina red triangle logo further adds some color and personality to the dials as the counterweight on either the seconds hand or chronograph seconds hand.

One of the more recent upgrades to the Alpina Startimer Pilot watch collection (at least some models) are the applied hour markers. Framed with a polished metal finish and filled with lume, the hour markers significantly upgrade the look over more “flat” pilot watch dials and also assist with legibility. You see this in both the three-hand and chronograph Alpina Startimer Pilot Automatic models, and it is an aesthetic feature that really helps me enjoy the collection as much as possible. 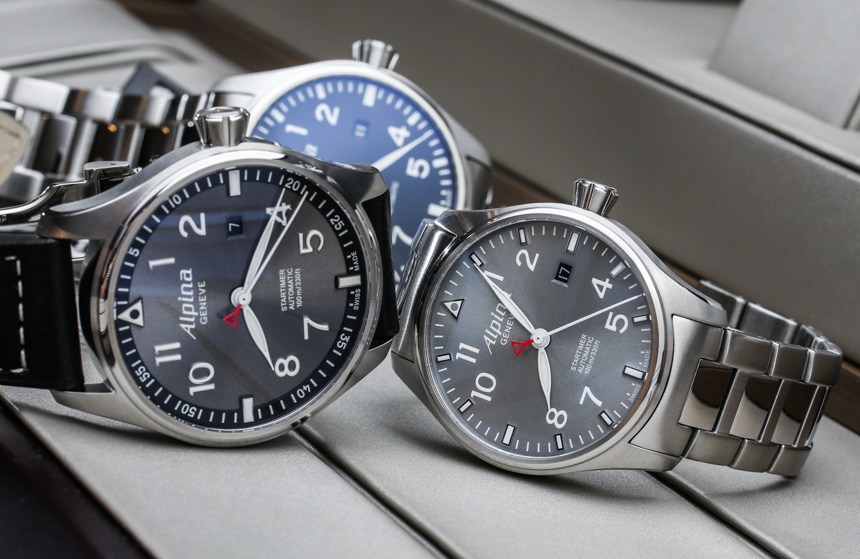 I further like that in addition to the various leather straps, Alpina makes many of their Startimer Pilot watches available on a steel metal bracelet. What is best for you really depends on your style. Bracelets are great, but many traditional pilot-style watches today come on straps. The contrast stitching of the thick leather straps Alpina provides offers some welcome personality.

Personality is really important in a pilot-style watch because too many today can come across as being relatively boring. The core design of a pilot watch is something highly functional and utilitarian. Making them beautiful is a more difficult task for a range of reasons. It is like trying to build a beautiful tank. The most beautiful thing about most pilot watches is that they work well and that they signify some type of idealized masculine lifestyle. For whatever reason, dive watches – which are far more limited by their technical requirements – have somehow been able to produce a number of very attractive classics. 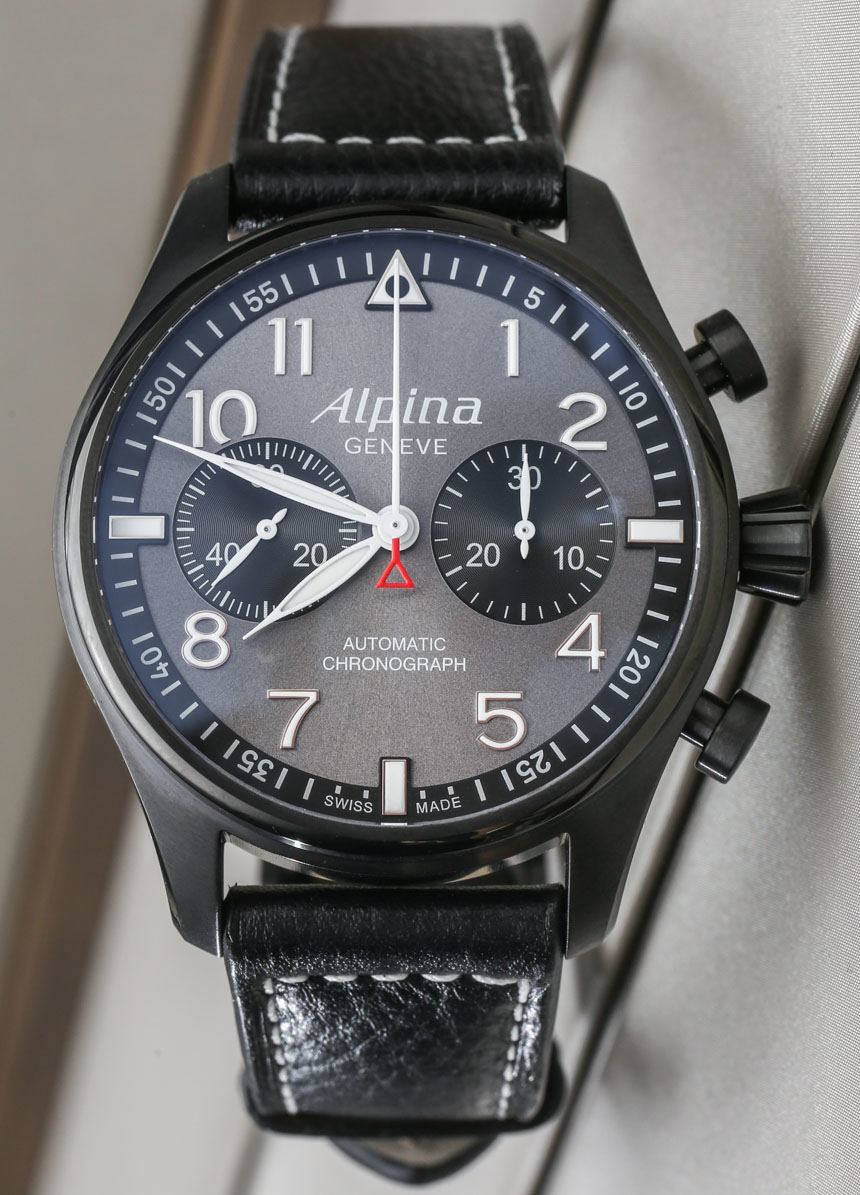 For every beautiful classic pilot watch (some Breguet models come to mind) there are perhaps 5 or 10 extremely bland, albeit functional ones. Their legacy lives on more because of what they represented versus what they looked like. Think about it: if you were a military pilot several generations ago, you may have been given a timepiece as part of your standard issue equipment. In many instances, you didn’t even own that timepieces and it was loaned to you by the government. Today some of those models are worth some money by simple virtue that very few good condition ones survived. 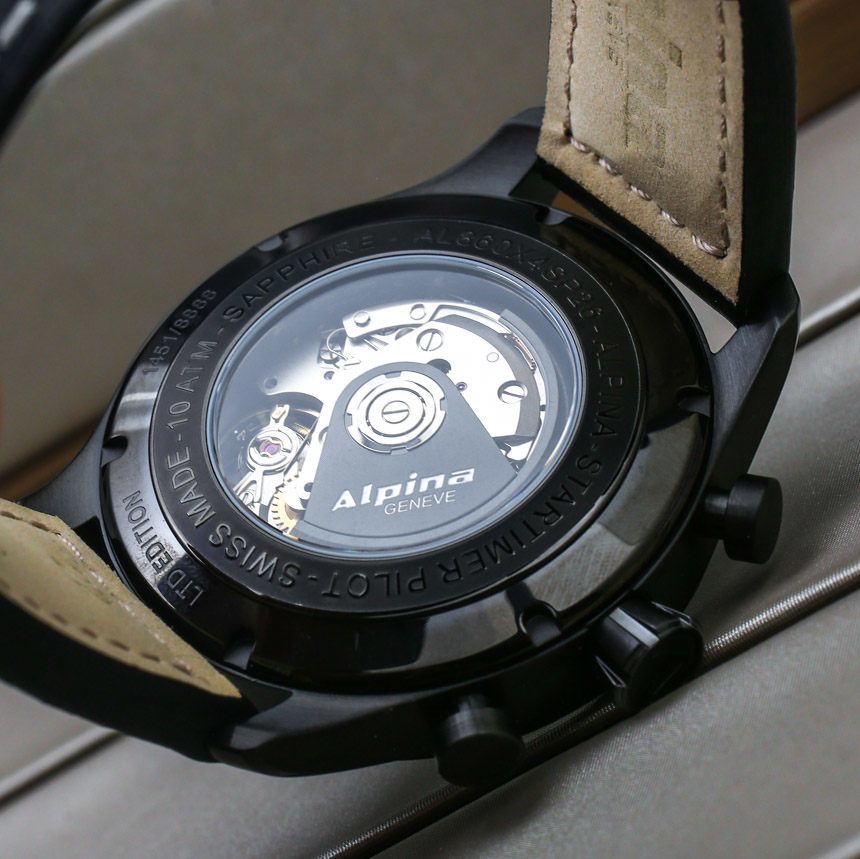 My intent behind having that simple discussion is to illustrate the fact that pilot watches aren’t just about suggesting flight, but are also intrinsically linked to military and commercial history – which is why so many people want one. If something in the Alpina Startimer Pilot collection isn’t your thing, there are many others out there.

The metallic sunburst finished “Sunstar” or “Blackstar” deep gray dials of the Alpina Strartimer Pilot Automatics are the best Alpina has to offer, and they come in a few hues, as well as with a brushed steel or PVD black steel case. Inside the watches are Swiss Sellita automatics. I am not sure which, but likely an SW200 automatic for the three hands and perhaps an SW500 for the chronographs. The cases are further all water resistant to 100 meters and have sapphire crystal, as well display casebacks with a view of the movement and a custom Alpina automatic rotor. 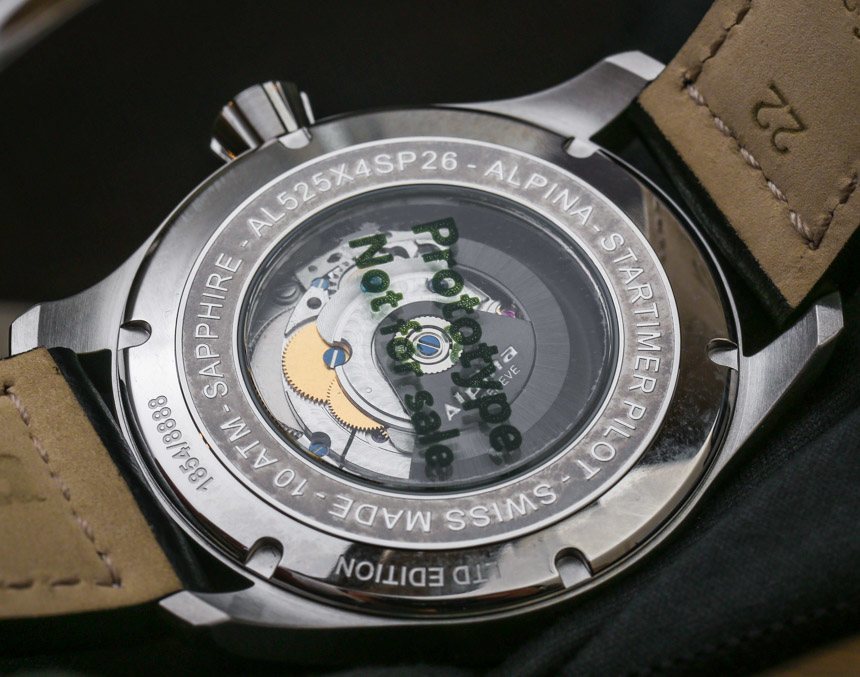 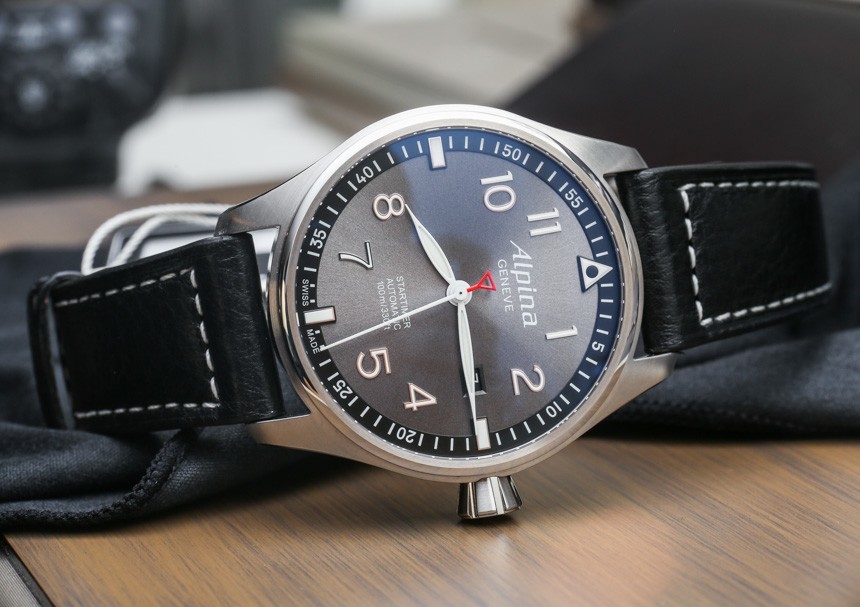 Prices in the Alpina Startimer Pilot Automatic watch collection start at 1,290 Swiss Francs (about $1,300) for a 40mm or 44mm wide three-hand automatic, and go up to 2,990 Swiss Francs (about $3,100) for the Alpina Startimer Pilot Automatic Chronograph model on either the bracelet or on leather with the black case. They are available for purchase on Alpina’s website. alpina-watches.com