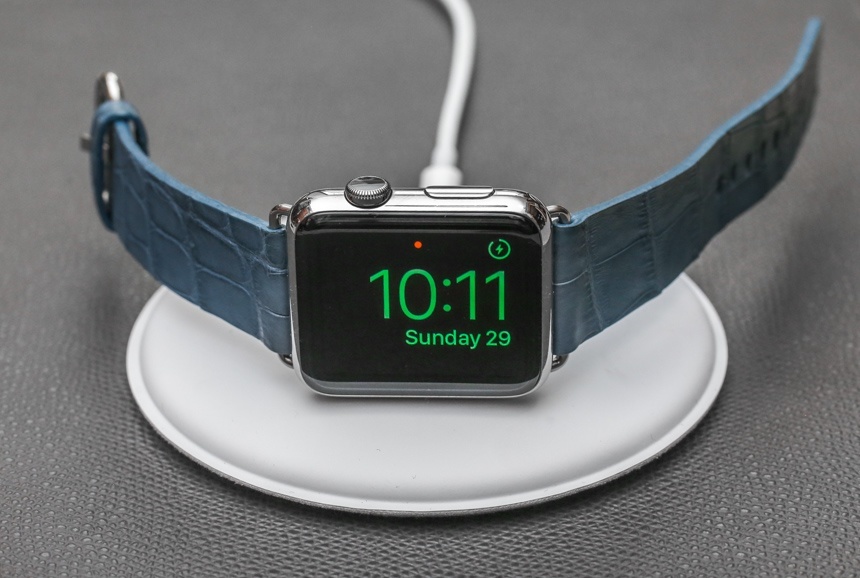 Recently, Apple quietly released a new accessory for the Apple Watch that is the “Apple Watch Magnetic Charging Dock,” and I think it is something most people who have an Apple Watch will want because it is finally a native way to turn the Apple Watch into a rather handy clock for your desk or bedside table. As ironic as it sounds, the Apple Watch actually serves very well as a little alarm clock if you don’t plan on wearing it all the time on your wrist. 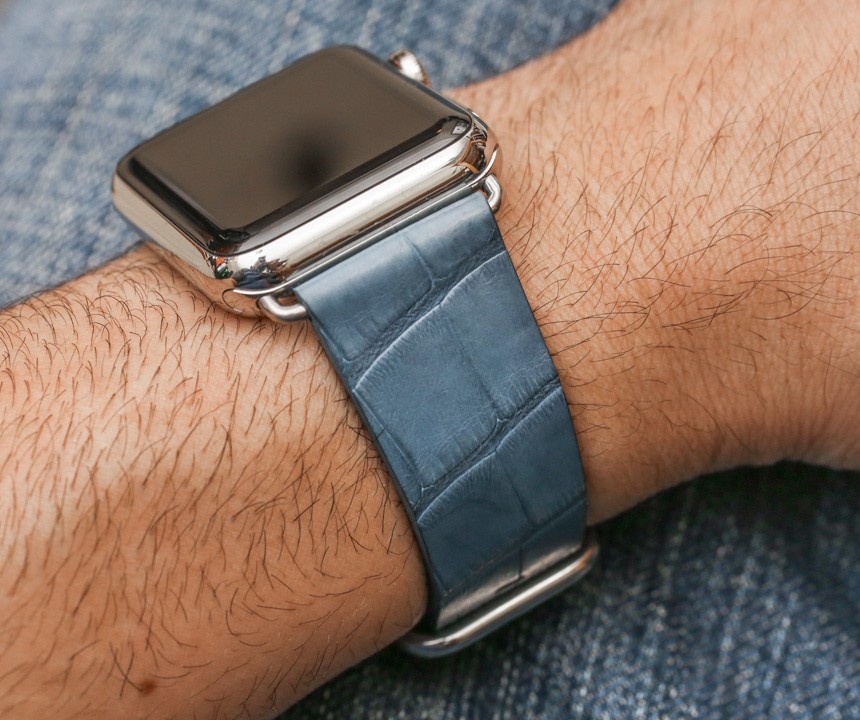 Allow me to also mention that on the Apple Watch here is a rather nice third-party Alligator leather strap from London-based Bianca Mosca. Apple offers a range of very high-quality straps for the Apple Watch, but of course, the beauty of this and many other Apple products is the universe of third-party accessories that allow people to further personalize their items (think of the world of iPhone cases). Bianca Mosca is a recently revived label that claims to specialize in a range of items made from mostly Louisiana Alligator. 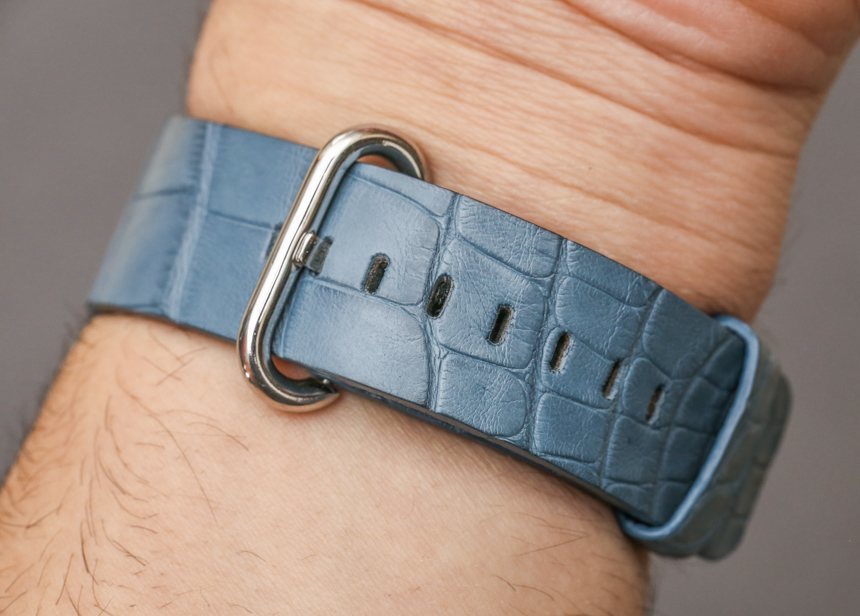 The Bianca Mosca Apple Watch Bands currently come in 10 colors for the 42mm and 38mm Apple Watches with matching metal hardware in either steel, yellow gold tone, or rose gold tone. This one is the “Blue Jeans” colored alligator strap, and according to Bianca Mosca, all of their Apple Watch straps are produced in France.

Personally, I like this strap a lot. I don’t believe the hardware is official Apple OEM, but it fits the Apple Watch fine, and the supple, flexible alligator strap is just how I like it with no seams or stitches on the exposed surface. The strap is also not stiff, which means it is comfortable from the first time you wear it. This also means that after constant wear you’ll eventually need a new one (1-2 year lifespan depending on how often you use it, in my opinion) but the result is something a lot more comfortable than more durable but stiffer straps. 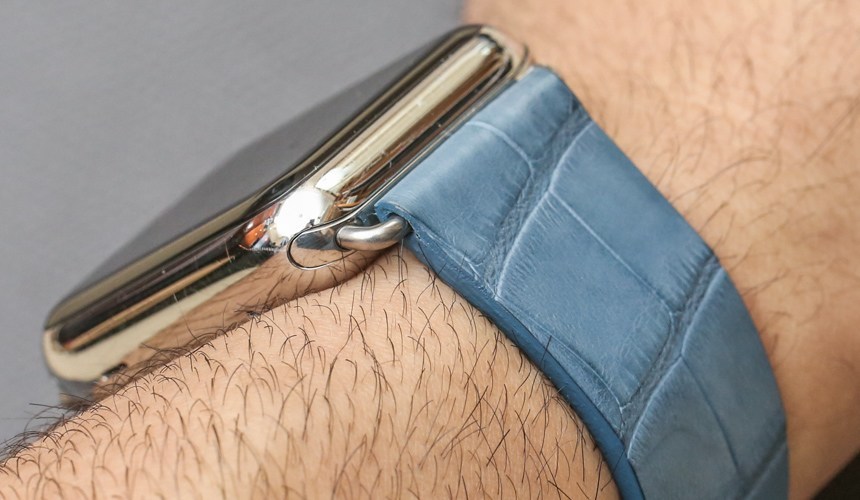 One of the interesting pieces of feedback I got while wearing the Apple Watch on this alligator strap is some people saying “it finally looks like a real watch.” I think the implication is that the look of Bianca Mosca’s colorful alligator lends itself better to the contemporary trends we see in traditional watch straps that compliment many of the more conservative leather choices offered directly by Apple. Anyhow, it is a nice strap, and I feel that Bianca Mosca did a good job in making an attractive range of alligator straps which are currently officially missing from Apple’s own range of Apple Watch bands. 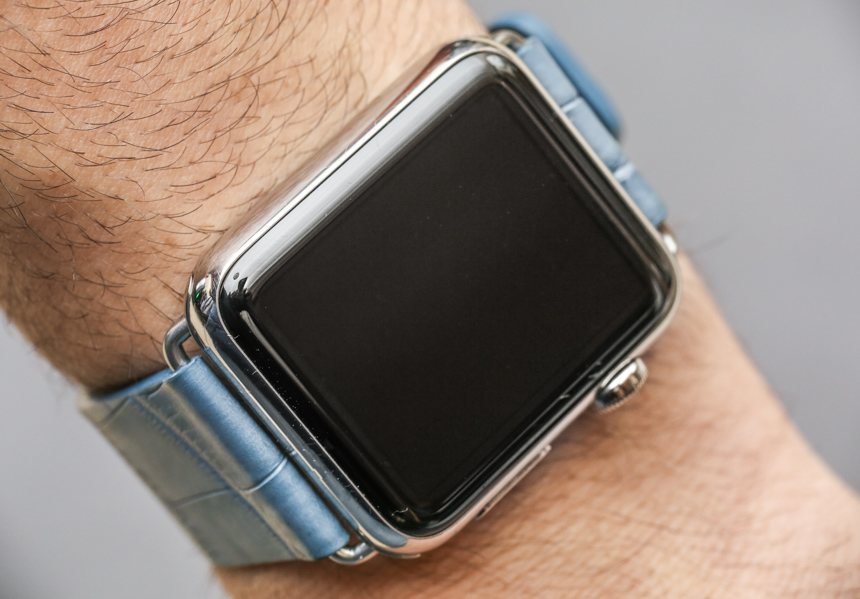 Moreover, given the issues of transporting certain animal skins and CITES concerns, I don’t believe Apple will ever officially offer alligator or other exotic-skin straps for the Apple Watch, so consumers interested in these products will have to turn to a smaller boutique operation like Bianca Mosca. Price for their alligator Apple Watch straps is $375 each, no matter the size or color. 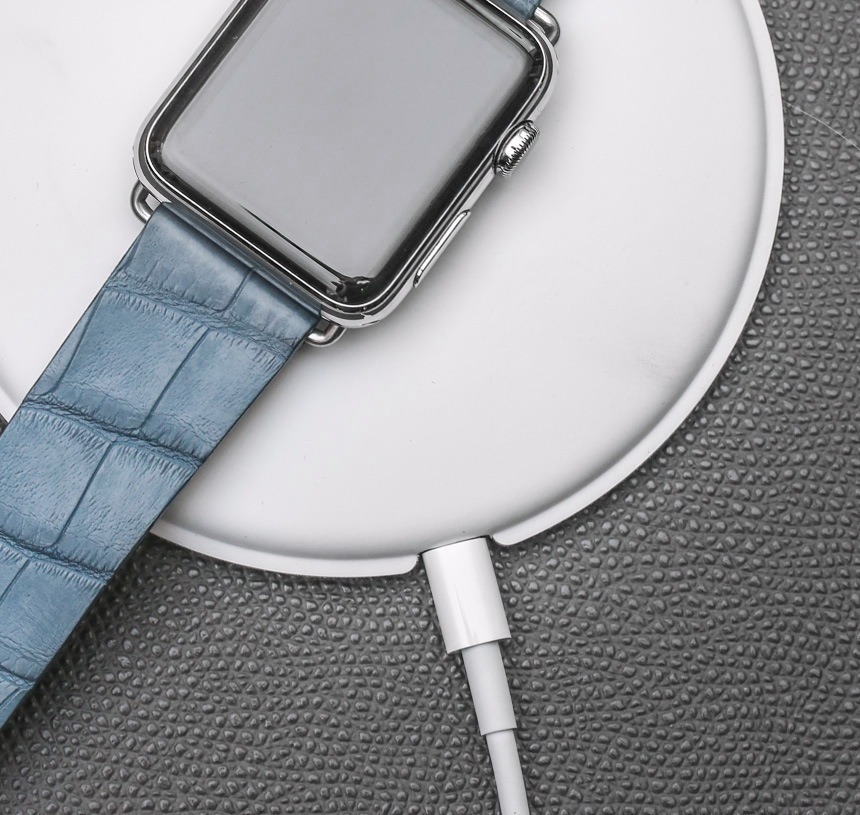 Going back to the Apple Watch Magnetic Charging Dock, I am happy Apple released this since it was an item that, in my opinion, was missing from the original Apple Watch kit. When you get an Apple Watch, it comes with a small magnetic plate which serves as the charger. This plate is not removable from the USB cord and is designed so that the Apple Watch can only be charged while in the face-up position. Also, the included charger doesn’t weigh very much, so it is easy to fall on the floor and doesn’t offer too much protection to the Apple Watch.

Of course, if you get a gold Apple Watch Edition, it comes with a travel case that also doubles as a charger. But in that case, you can’t really see the watch dial from the side very well when it is charging, so it doesn’t really do the same thing as the Apple Watch Magnetic Charging Dock. 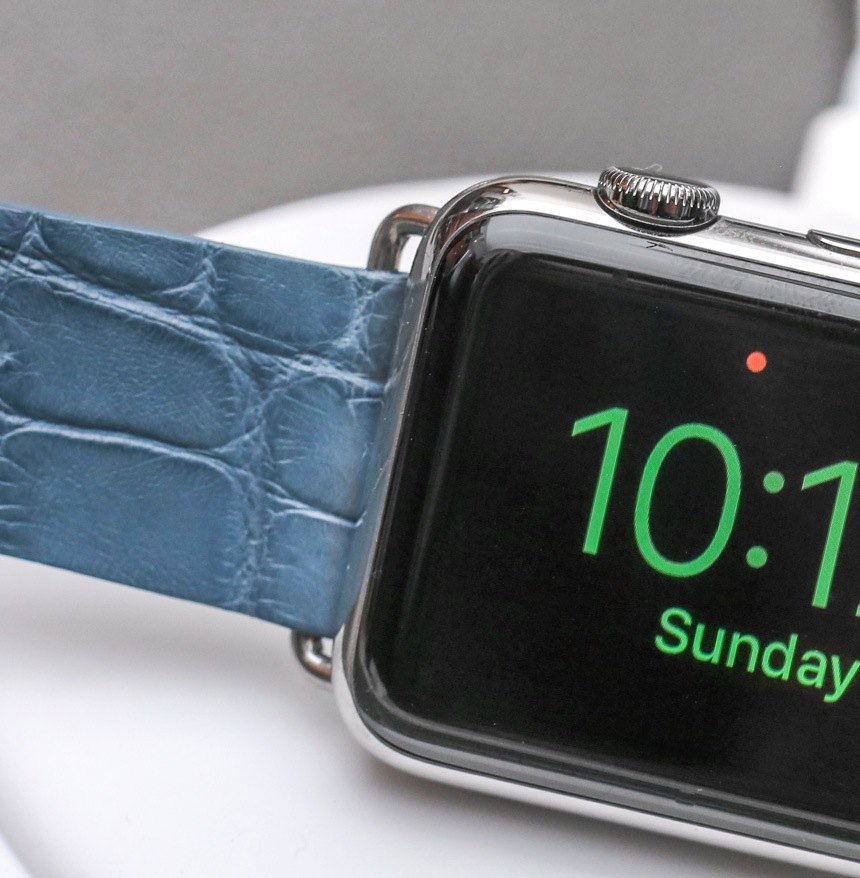 Why did Apple release this new Apple Watch Magnetic Charging Dock, exactly? Well, it serves a few purposes. One, it allows for a more secure charger that helps prevent the Apple Watch from getting scratched or possibly being knocked over. The doughnut-style base is weighted so that it does not move around easily. The charging disc itself can be used either flat or in a turned-up position. This latter position lends itself to making the Apple Watch a handy clock. 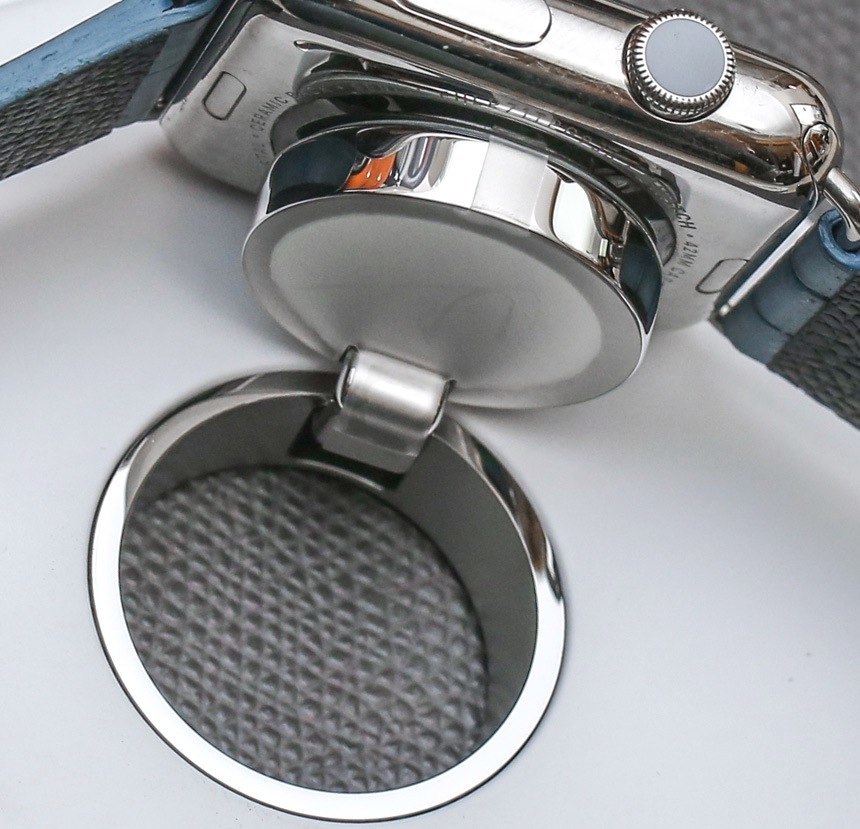 In the Apple Watch OS2 operating system, Apple introduced the new “Nightstand mode” (more from Apple there), which automatically activates when the Apple Watch is first placed in a horizontal position and when it is charging. The face automatically shifts to a horizontal clock mode and allows for alarm clock-style operation with a snooze feature. You can even set an alarm from the Apple Watch (or your iPhone as well). Currently, Apple doesn’t offer any customization for Nightstand mode, meaning you can’t change the clock face or colors, currently in green. Other than the time, you get to see the day of the week and date, battery charge indicator, as well as whether or not the alarm is activated. The snooze timer is preset for nine-minute intervals. 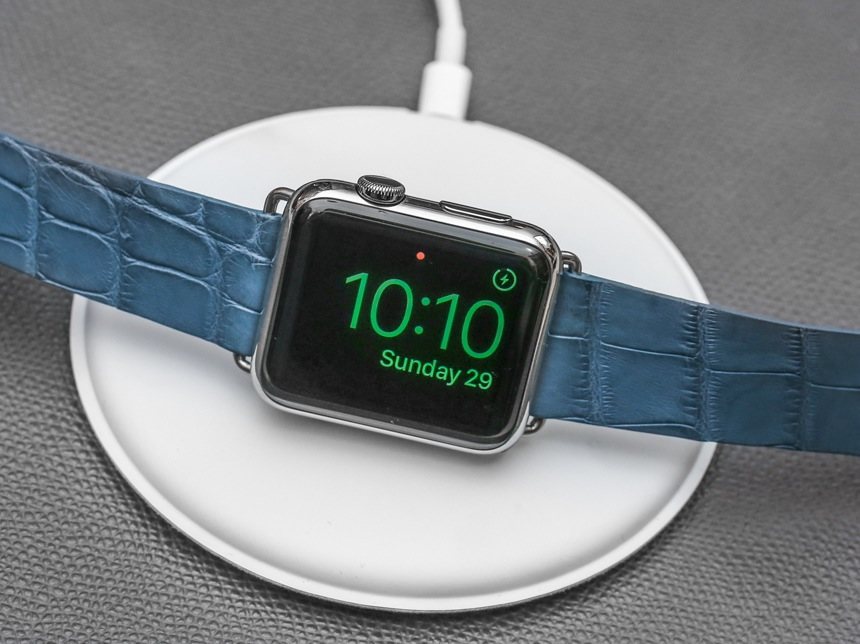 One of the more interesting elements of Nightstand mode is when the screen is on or off – and it makes me like how the Apple Watch acts as an alarm clock, especially for travel. I get very sensitive about light when I sleep, but I also need the time. I really dislike bright bedside clocks that are on all the time. In Nightstand mode, the Apple Watch display is not on all the time – but rather “comes to life” when activated in certain ways.