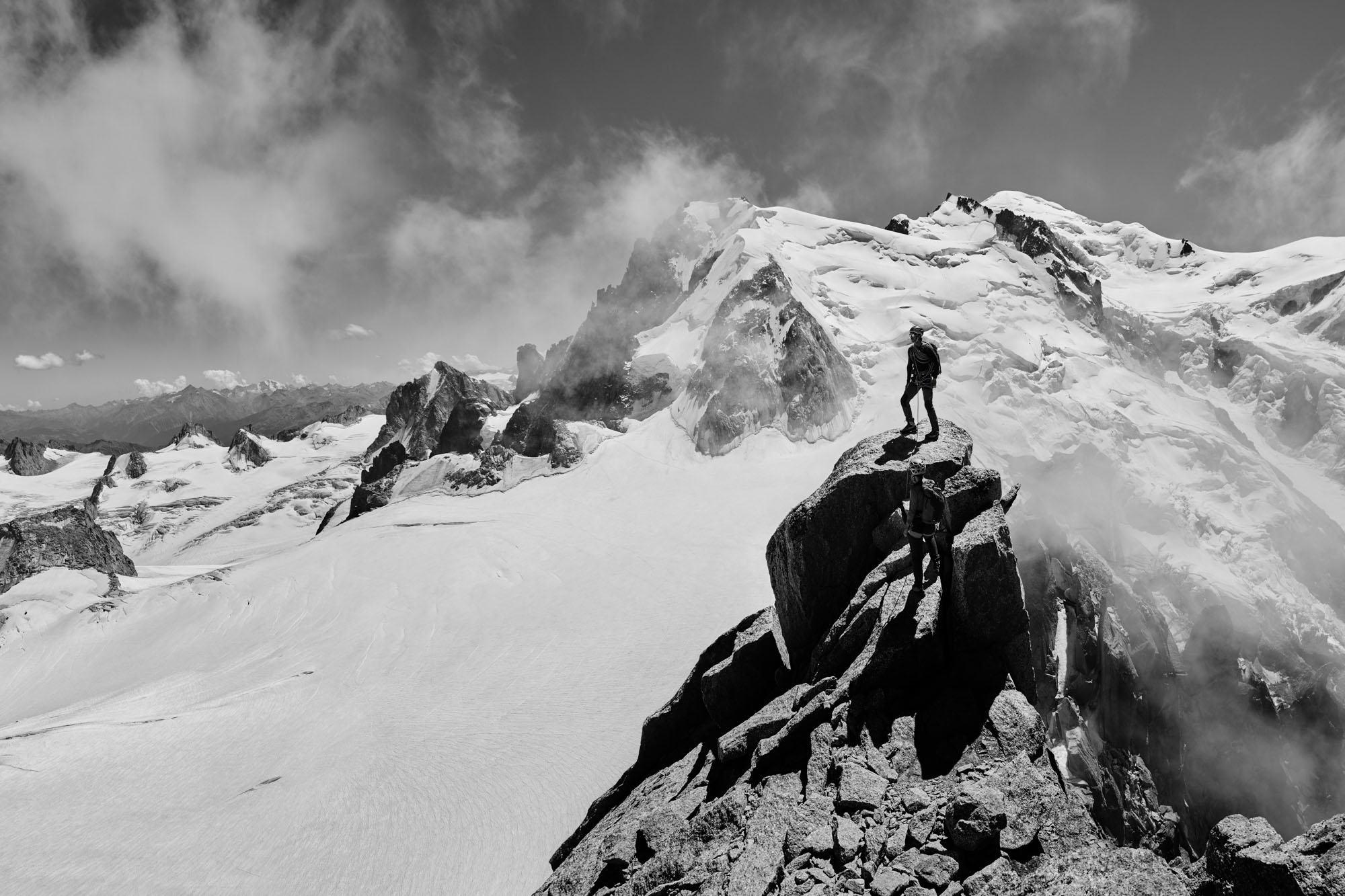 aBlogtoWatch is at Apple Park, reporting live from Apple’s September 2022 event. In this article, we are bringing you all the specs and essential details about the all-new Apple Watch Ultra. Apple, the undisputed king of smartwatches, has just released the Apple Watch Ultra, a more rugged, more capable, and more expensive Apple Watch, packing surprising new features and notable improvements — read on for all specs and pricing.

It’s right there in the name: the Apple Watch Ultra is the largest, most rugged, most feature-heavy, and outdoorsy Apple Watch ever – but Apple claims it’s designed for way more than leisurely “outdoorsy” stuff. The Apple Watch Ultra comes on three different loops (straps) and their configuration implies the different scenarios this (G-Shock-rival, anyone?) smartwatch is meant to tackle: The elastomer Ocean Band with its tubular geometry fits over a wetsuit and, catch this, goes with the first-ever Apple Watch to comply with the EN13319 international standard for dive computers for recreational scuba diving to 130 feet. The Trail Loop is designed for endurance athletes, crafted from a lightweight textile for a comfy and snug fit, the thinnest strap yet with a tab for easy adjustments. The Alpine Loop has “explorers in mind,” woven without stitches to be thin and comfy. 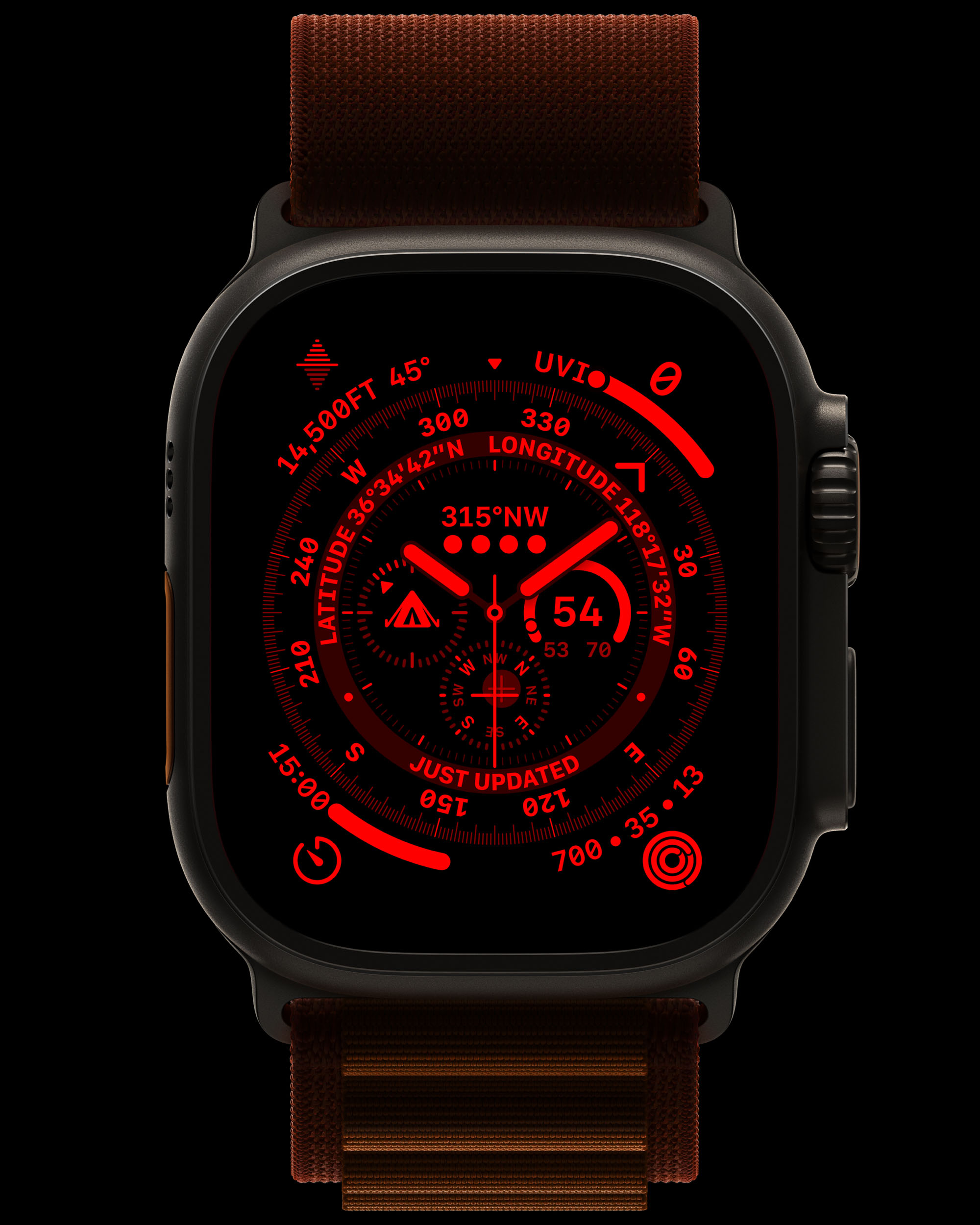 “We’ve been working on something completely new,”  Apple explained in its “Far Out” event presentation. Apple worked with extreme explorers crossing the harshest environments, accomplished divers and underwater photographers, as well as ultra-marathon runners, to create a new Apple Watch specifically for exploration, adventure, and endurace. “This has been years in the making,” we hear just before we see a bolder, definitely more robust-looking Apple Watch crushed by waves, cooked in red heat, and blasted with sand. 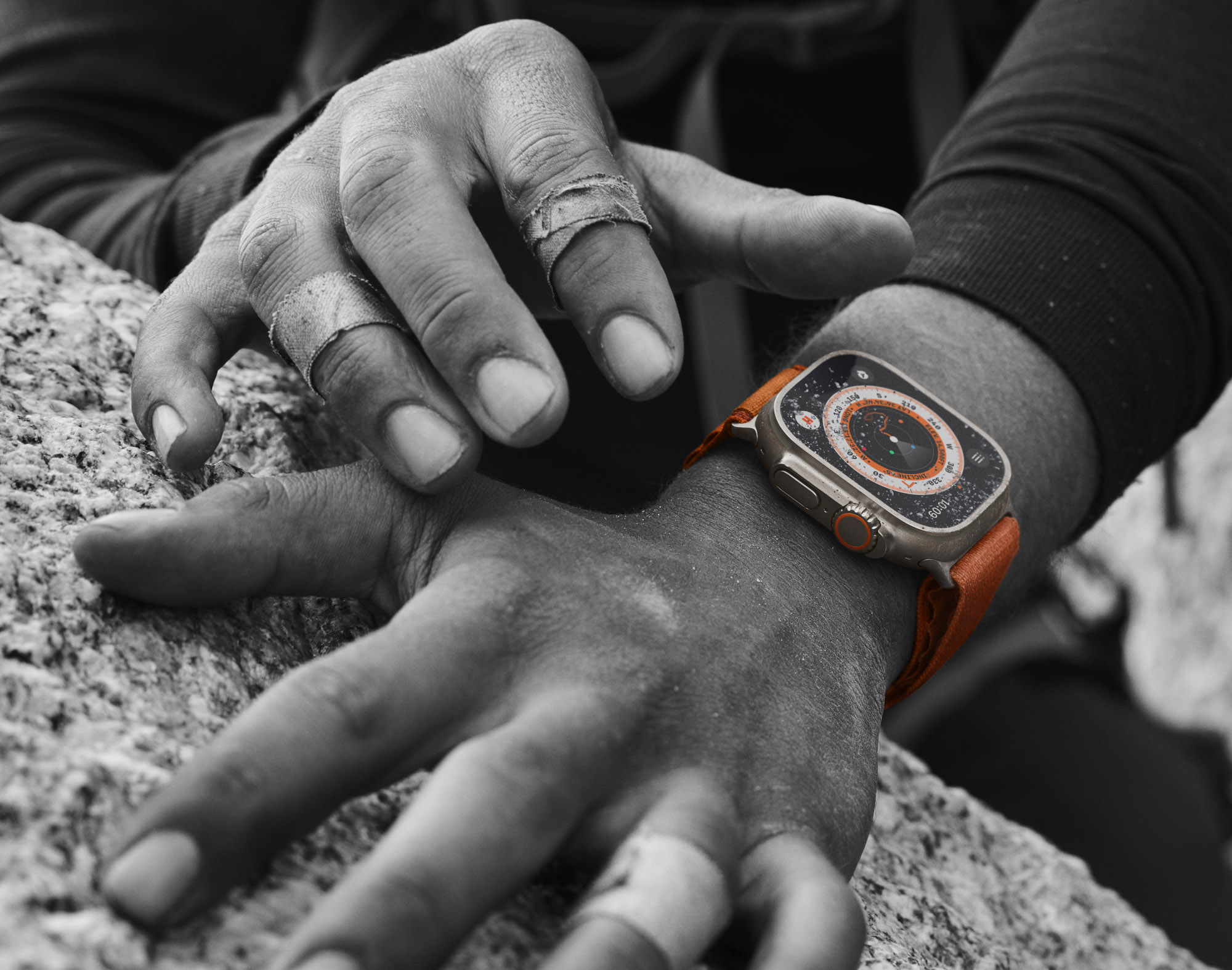 49mm is the size Apple quotes for the Watch Ultra, but bear in mind that it’s a square-shaped watch with short lugs, so comparing that to the traditional watch industry’s way of providing measurements will likely be misleading. Stay tuned for our hands-on coverage from Apple Park for wrist shots. The case is crafted using “aerospace-grade titanium” with a bezel that completely surrounds a flat sapphire front crystal for enhanced scratch resistance.

Set into the side of the case is a new button called the Action Button in “high-contrast international orange” to control additional functions, assigned by the user. A larger crown has been fitted for gloved use and is safeguarded by some proper-looking crown guards giving us real “tool watch” vibes there for a moment. A second speaker with increased volume, three microphones, and advanced software have all been installed for better calls in windy conditions — in Apple’s presentation video we see people abandoned on blizzard-beaten cliffs calling their base camp, shouting at their Apple Watch. This, notably, could mark the Apple Watch’s entry into the “desk diver” world, where we desire and celebrate a watch for its overkill functions. In other words, I am yet to see anyone making a call on their Apple Watch and shouting at it. 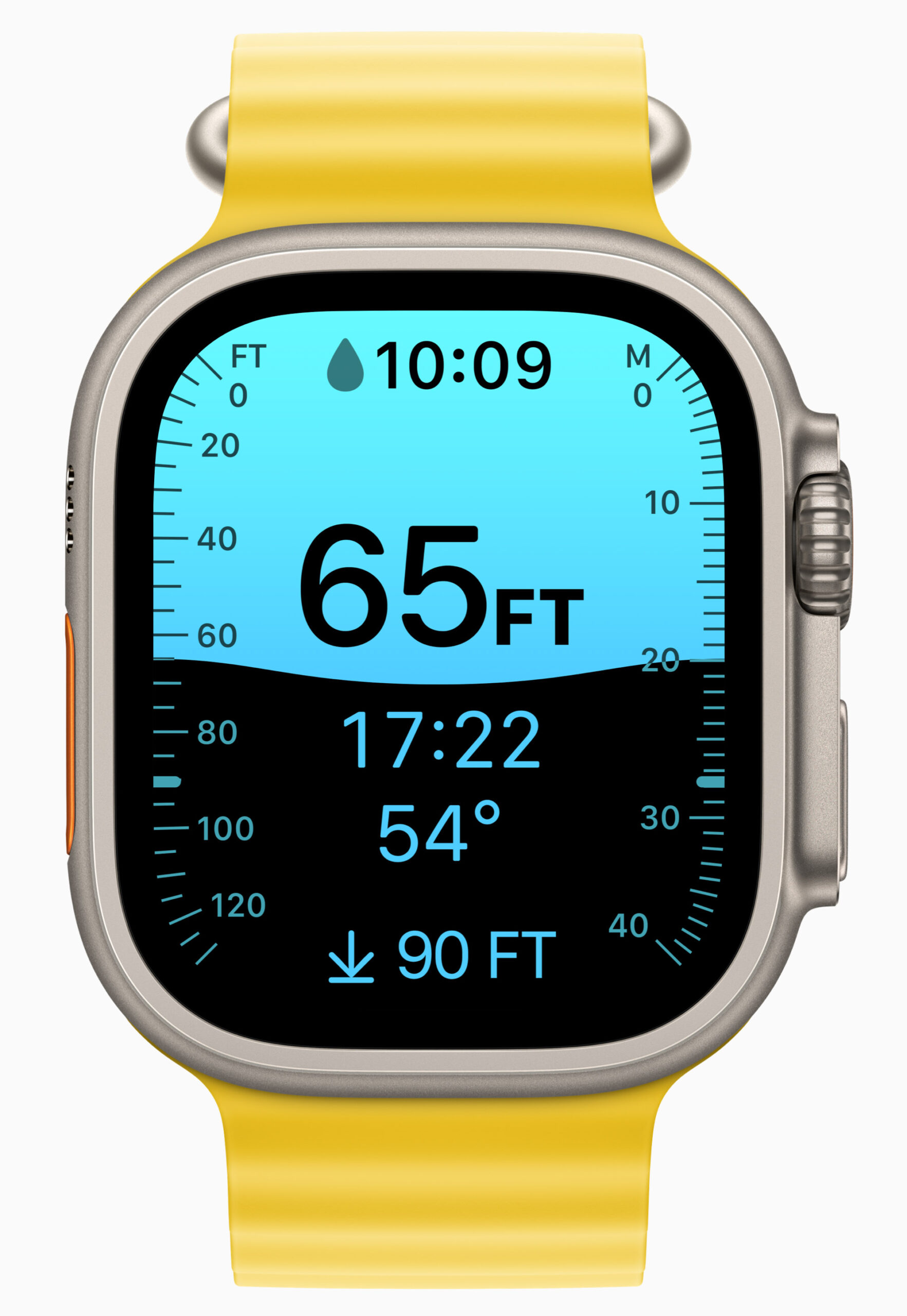 100-meter water resistance is the rating Apple claims for the Apple Watch Ultra — and that rugged exterior and all its seals are protecting the biggest and brightest display on an Apple Watch, rated at a barely believable 2,000 nits, which would twice as bright as any Apple Watch display before.

The biggest battery ever fitted to an Apple Watch is also present, as Apple clearly understands that charging a watch halfway through an ultra-marathon or in the middle of a blizzard is a bit of a stretch — and, notably, the circumstances under which the Apple Watch Ultra is designed to be used almost always require the use of GPS and health tracking features which are known to quickly deplete a small battery. Apple claims that the Apple Watch Ultra has a battery life of 36hrs on a single charge. That will be extendable up to 60 hours using new battery optimization software coming later this fall. 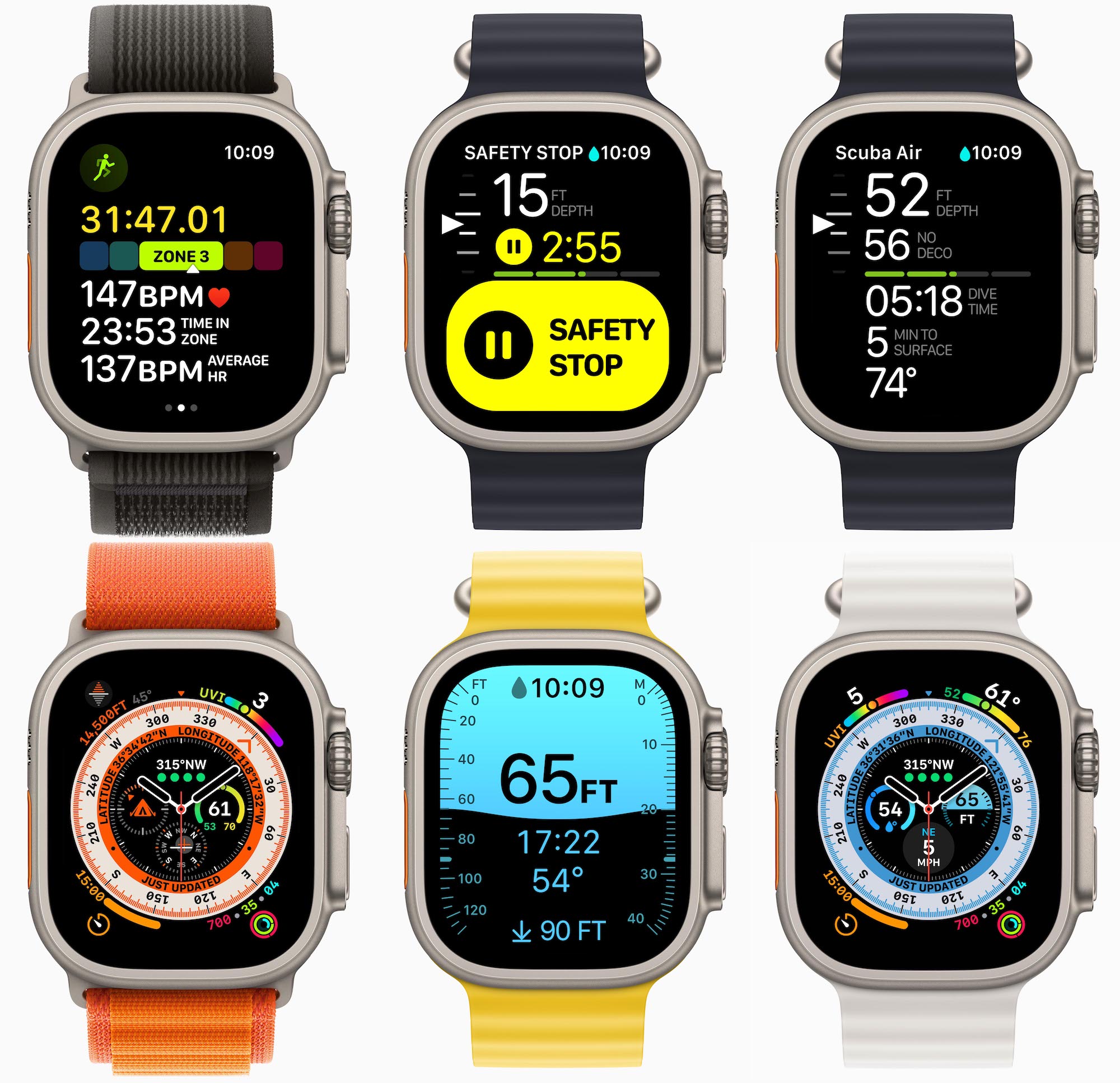 As far as Ultra-specific functionality is concerned, perhaps the biggest feat is the aforementioned dive computer feature with a depth gauge, but there is a new Wayfinder face customizable for mountains, oceans, and trails, a Night Mode in red and black for better visibility in the dark, as well as an enhanced trail-tracking feature with the new Compass app that offers precision views for orienteering, markable locations and the ability to retrace steps. Apple says the retrace function automatically activates if it notices the wearer is leaving the trail. There is a built-in, 86dB siren that can be heard from 180 feet away.