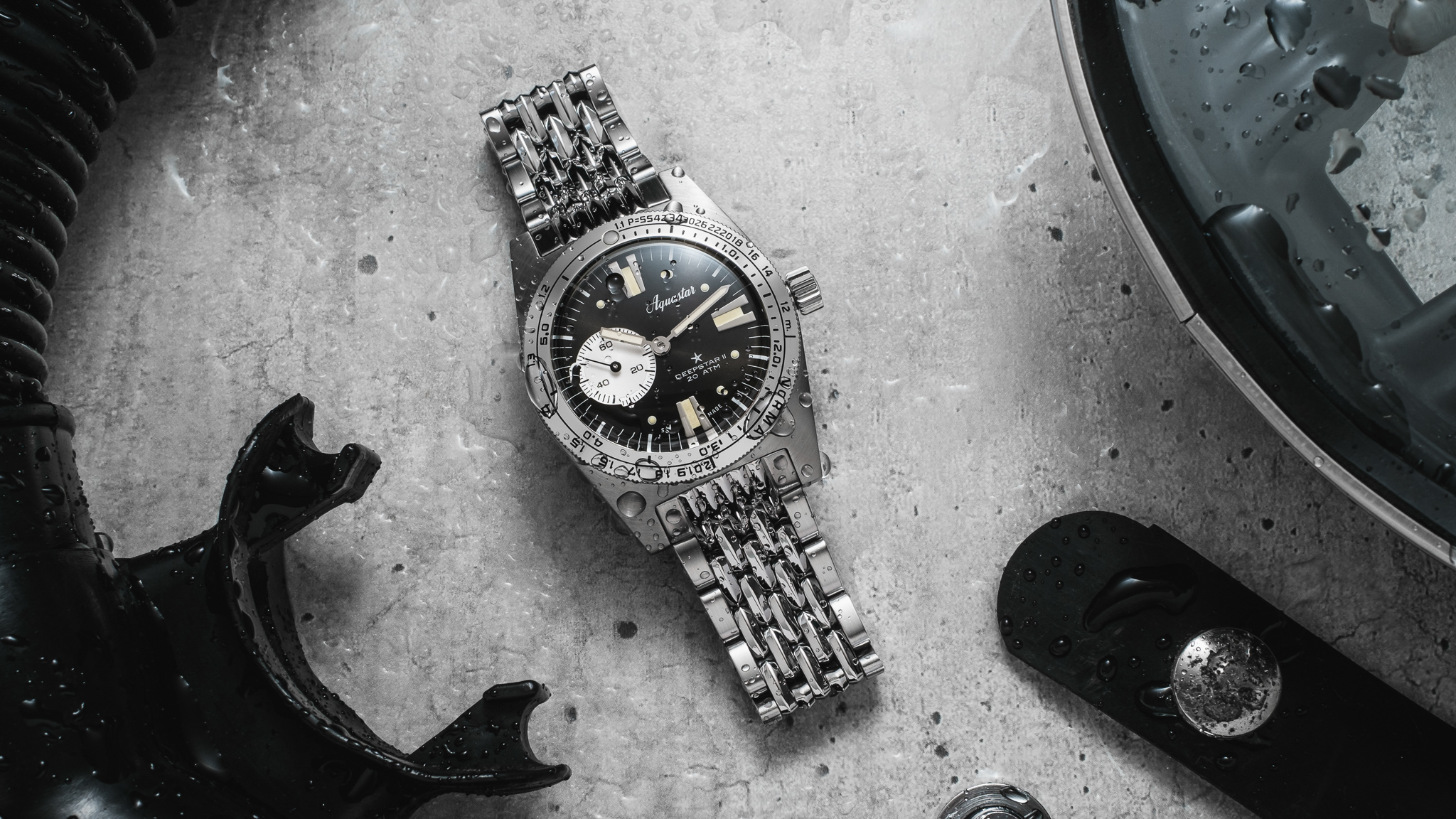 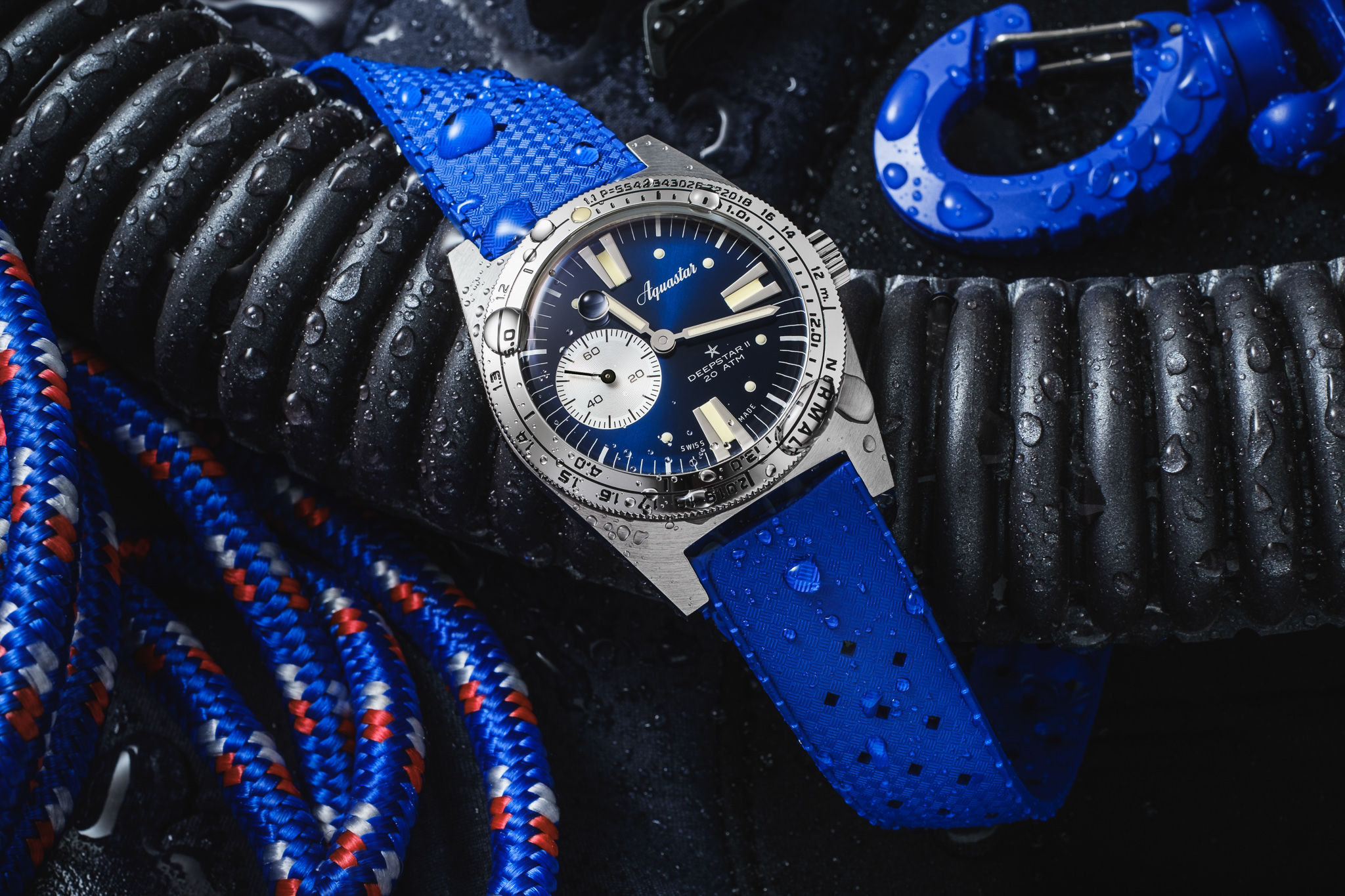 Resurrected a little over a year ago, the Aquastar brand hasn’t taken long to find both footing and favor in the dive watch collector community as a brand faithful not just to its origins in the 60s, but one that’s also cognizant of current sizing preferences in the 21st century. Case in point: the newly introduced Deepstar II, a charming 37mm diver that’s neither re-issue nor homage to an archival model, but rather an entirely new reference that takes the bi-directional rotating “no deco” bezel, oversized trapezoidal hour markers, and contrasting “cyclops” register aesthetic of the Deepstar Chronograph and builds a fresh, three-handed execution around those collective signatures. 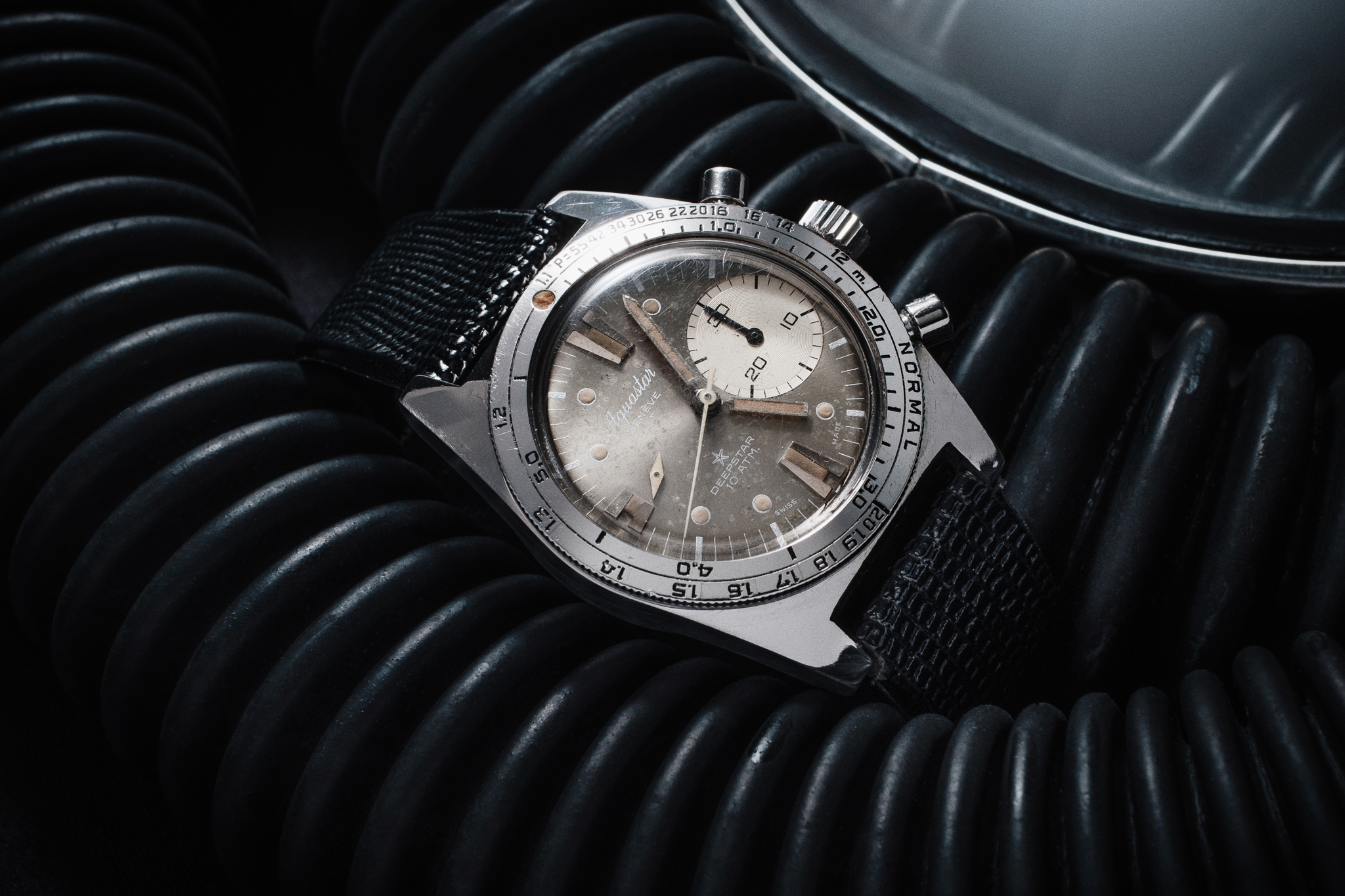 An original Deepstar Chronograph from 1962.

As the story goes, Belgian underwater archeologist and Deepstar inventor Marc Jasinski was recently consulted on what the sequel to the Deepstar chronograph might have been, had the Aquastar brand successfully weathered the quartz crisis back in the 70s and 80s. His own feedback soon shaped the new Aquastar release we’re seeing today, one that represents an interesting hypothetical response to a question that few brands take the time to explore when it comes time to update or continue a beloved property. It’s a novel approach to product design — particularly in an age when most brands seem content to specifically refresh what’s already been done, and it also speaks to the versatility of the original source material. Characterized for its arcane rotating bezel and oversized 30-minute counter at 3 o’clock, the rugged and reliable Deepstar chronograph was quite a pioneering specimen when it debuted in 1962, as the first watch that could help its wearer calculate “no decompression” limits for repeated dives — with that repetition being the key, as it enabled the Deepstar to become one of the foremost choices for pioneering dive professionals actually living and working in the field. 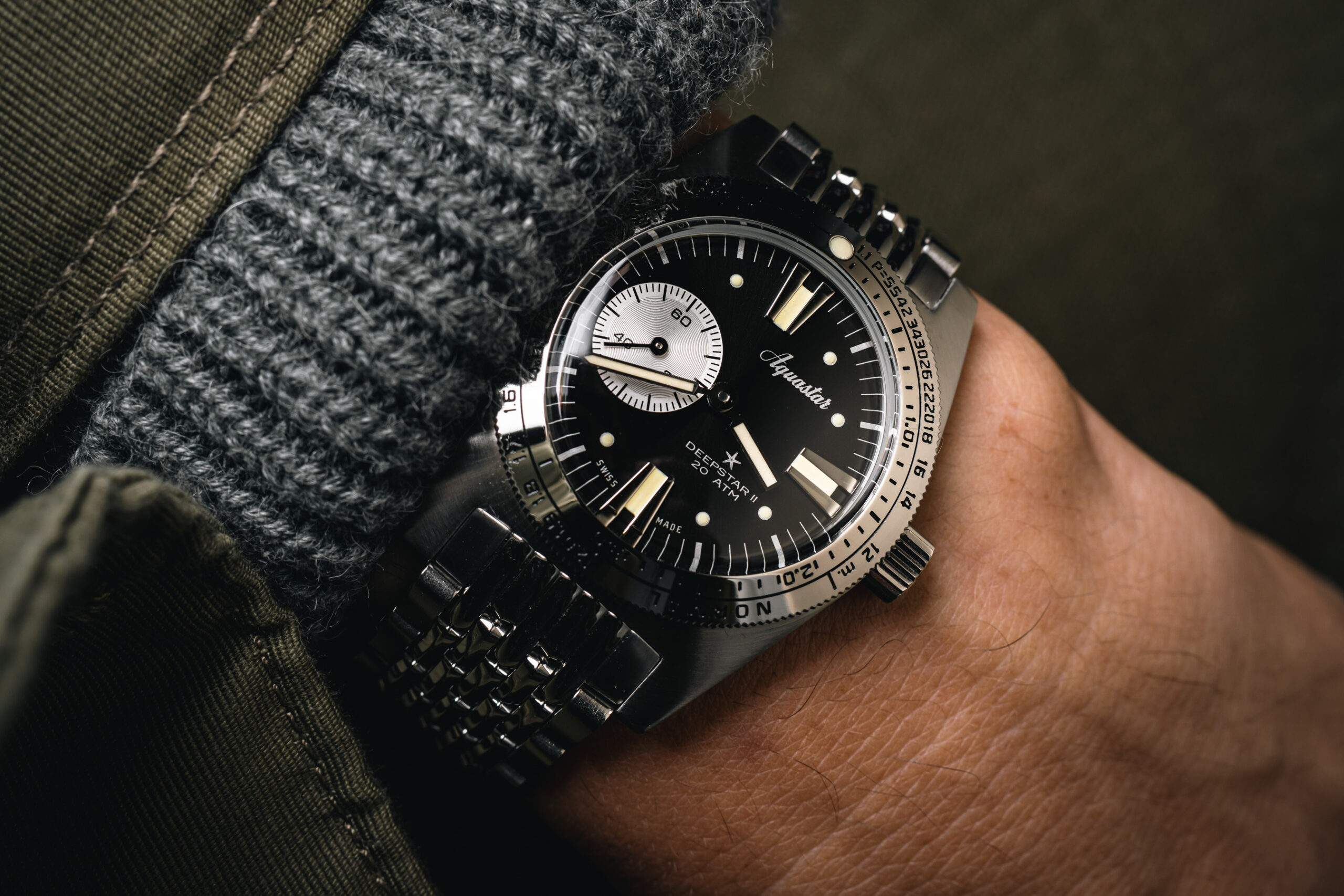 Like 2020’s 40mm Deepstar chronograph re-issue, the new 37mm Deepstar II also wears a touch larger than its conservative vintage-inspired specs suggest, due in part to the relatively long lugs (the Deepstar II’s lug-to-lug height measures 47mm), the generously domed crystal (which tops out at 13mm from crystal to caseback), and the broad dial aperture. So while 37mm might be the official dimensions on paper, on wrist, it wears more like a 39mm diver, which should be right in the sweet spot for folks in pursuit of more thoughtful proportions when it comes to old-school-inspired tool watches. 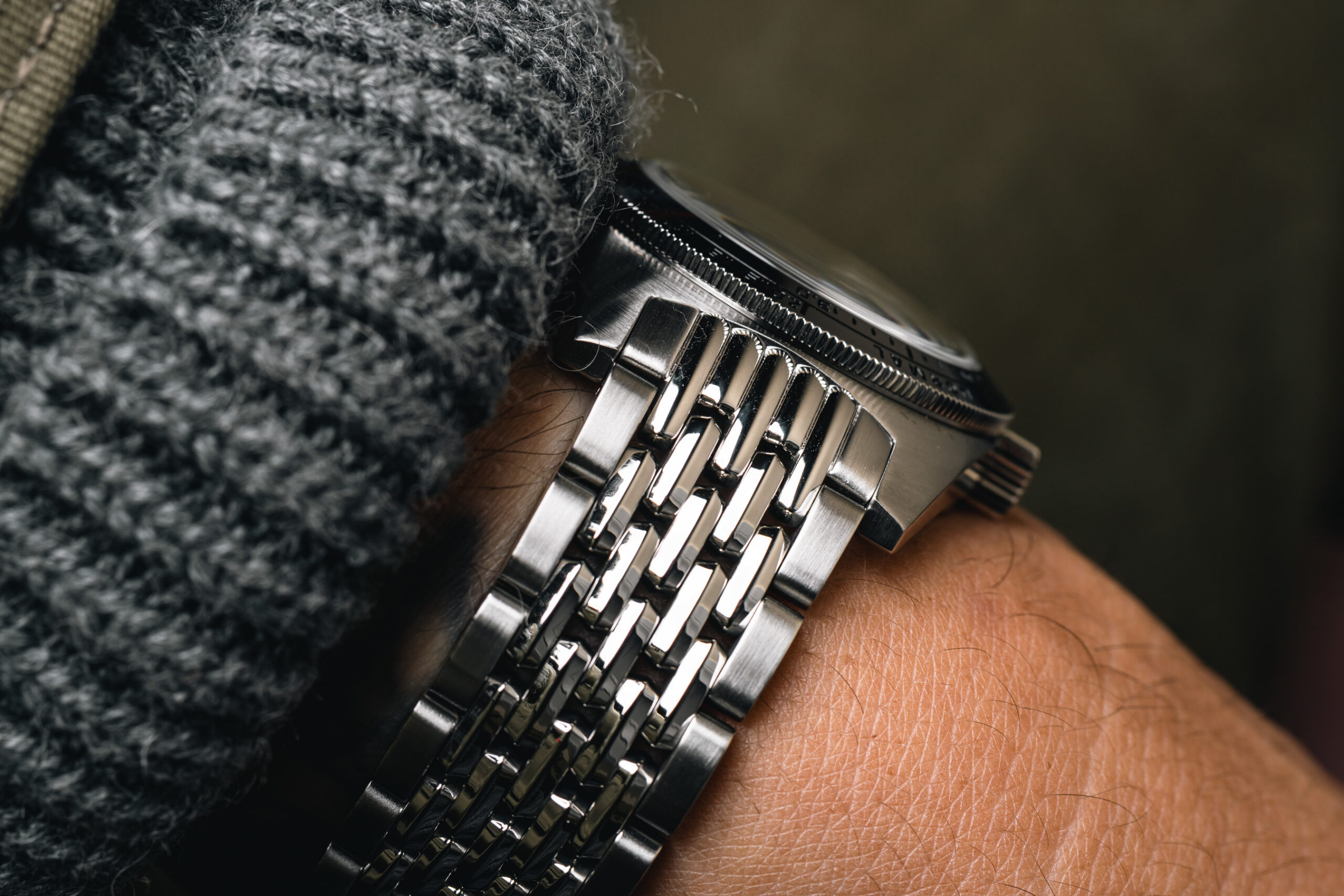 Served up on either a seven-link “beads-of-rice” bracelet or an excellent genuine Tropic rubber strap, the Deepstar II sits low and snug across the wrist — a welcome contrast to the 2020 Deepstar Chronograph which, despite its own conservative measurements, did wear long and a little top-heavy (particularly due to the added complication of the chronograph) on smaller wrists. The lug width of the Deepstar II drops to a narrow 19mm, which might reduce the number of compatible straps in the watch box, but it’s worth noting that this lug width, combined with the case’s 36.9mm (37mm for all intents and purposes) is actually the official measurement of the pioneering Deepstar chronograph from 1962. It’s fair to wonder – will we ever get a modern Deepstar chronograph in these measurements? It seems unlikely, as the La Joux-Perret chronograph movement used on the 2020 Deepstar won’t accommodate a smaller case, but we dreamers are just gonna dream, right? 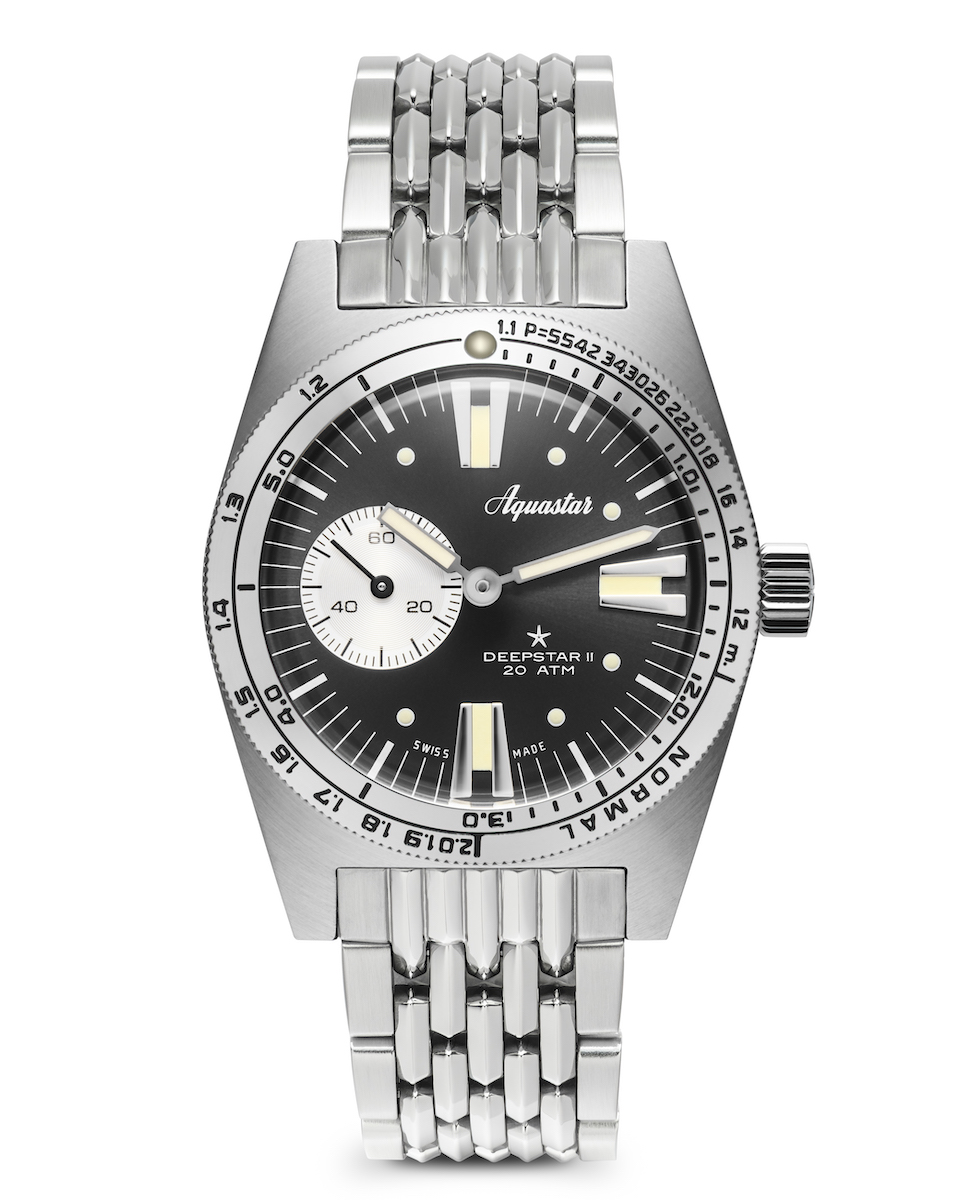 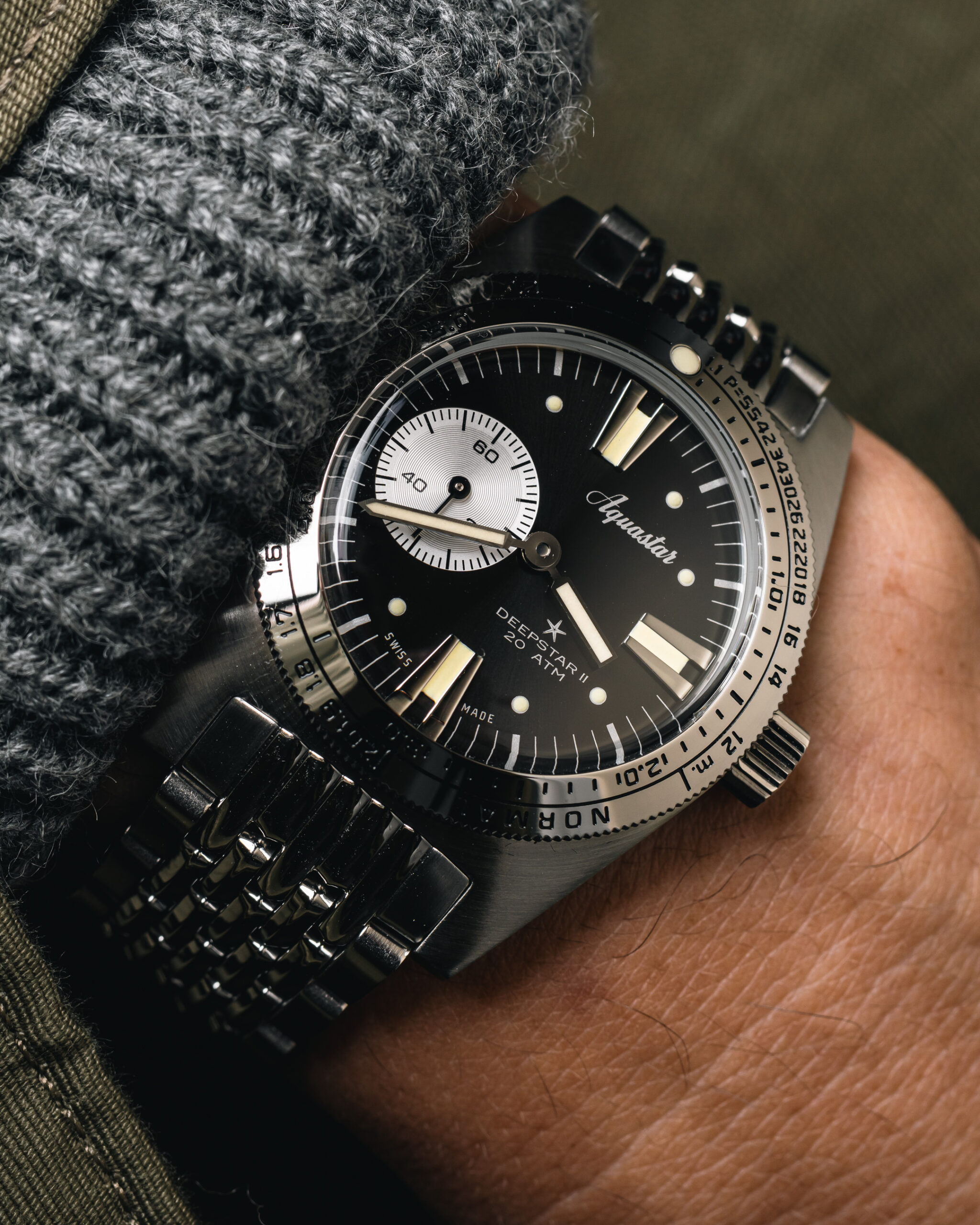 Word on the street is that the first two production batches of the Deepstar II were sold in the first 24 hours of last week’s launch, and while the pre-order price of $1,490 is still being honored, delivery for this third batch isn’t expected until sometime in the summer of 2022. If you managed to secure a slot in the first production shipment, those watches will be landing on wrists sometime before Christmas. In the meantime, you can learn more about the Aquastar story at aquastar.ch. 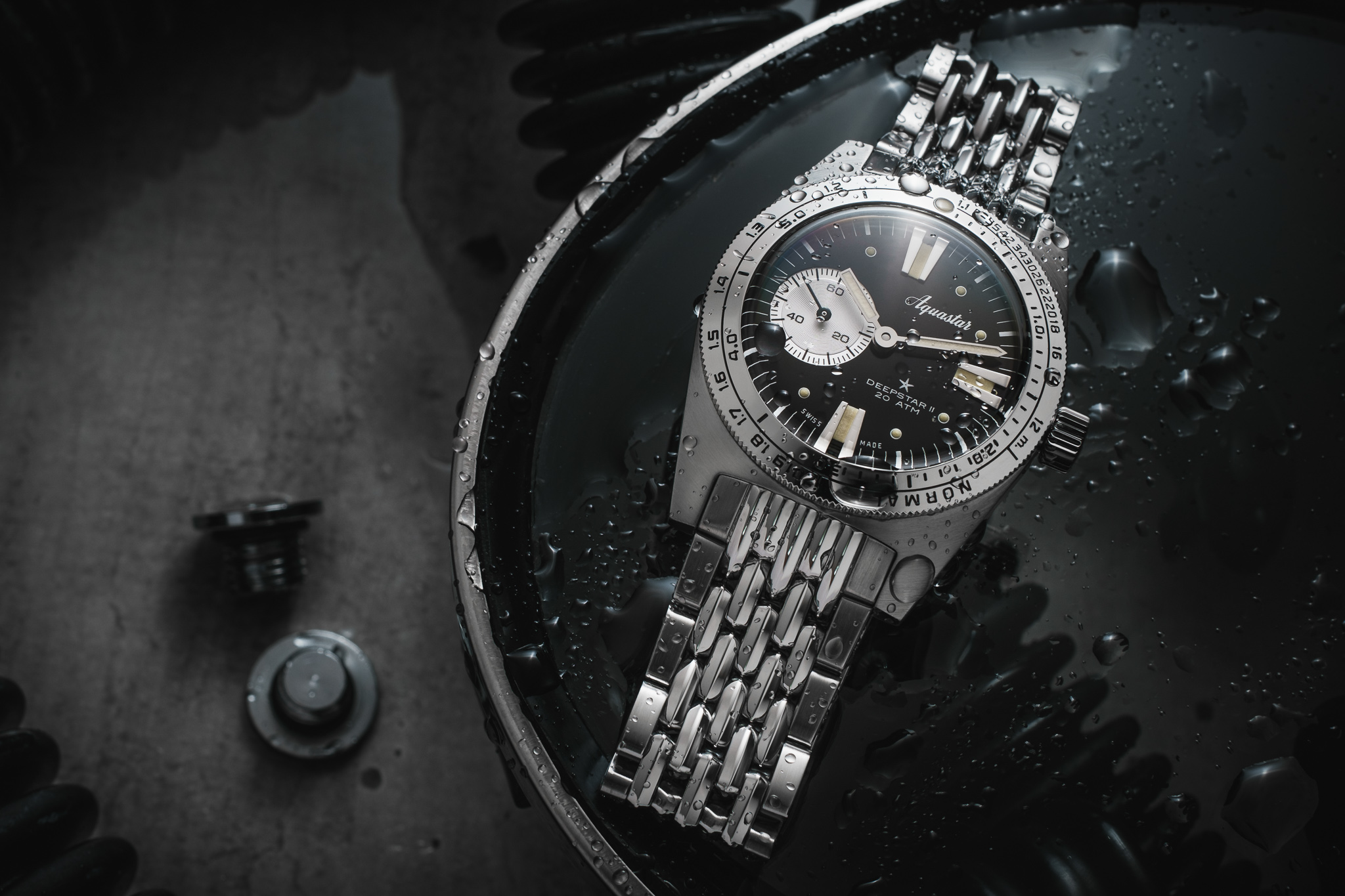