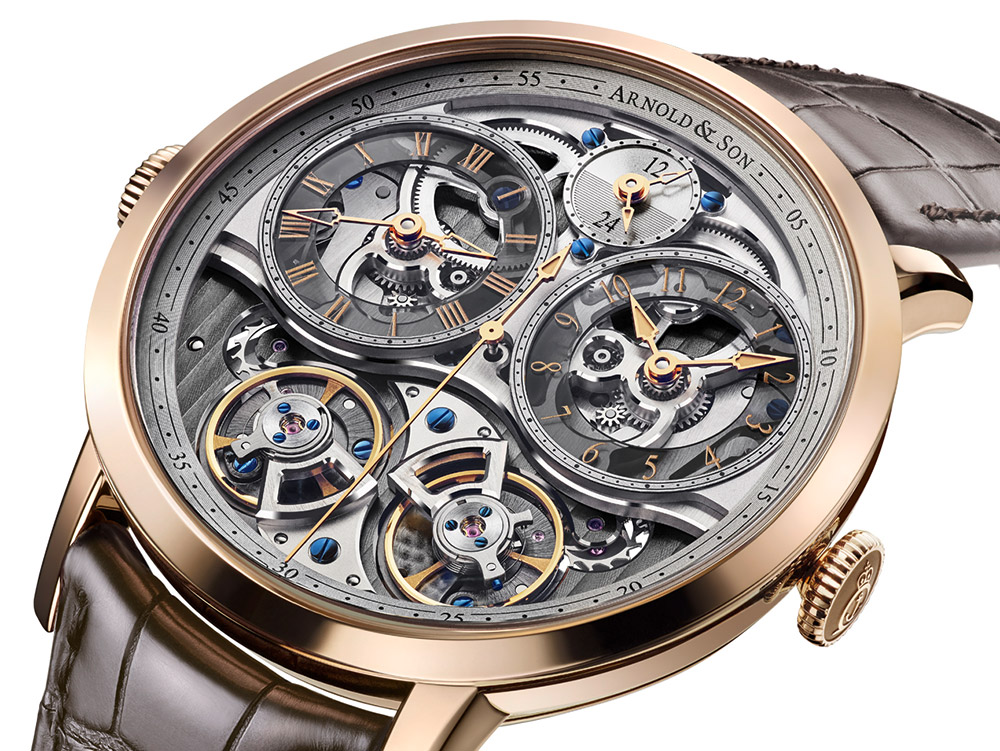 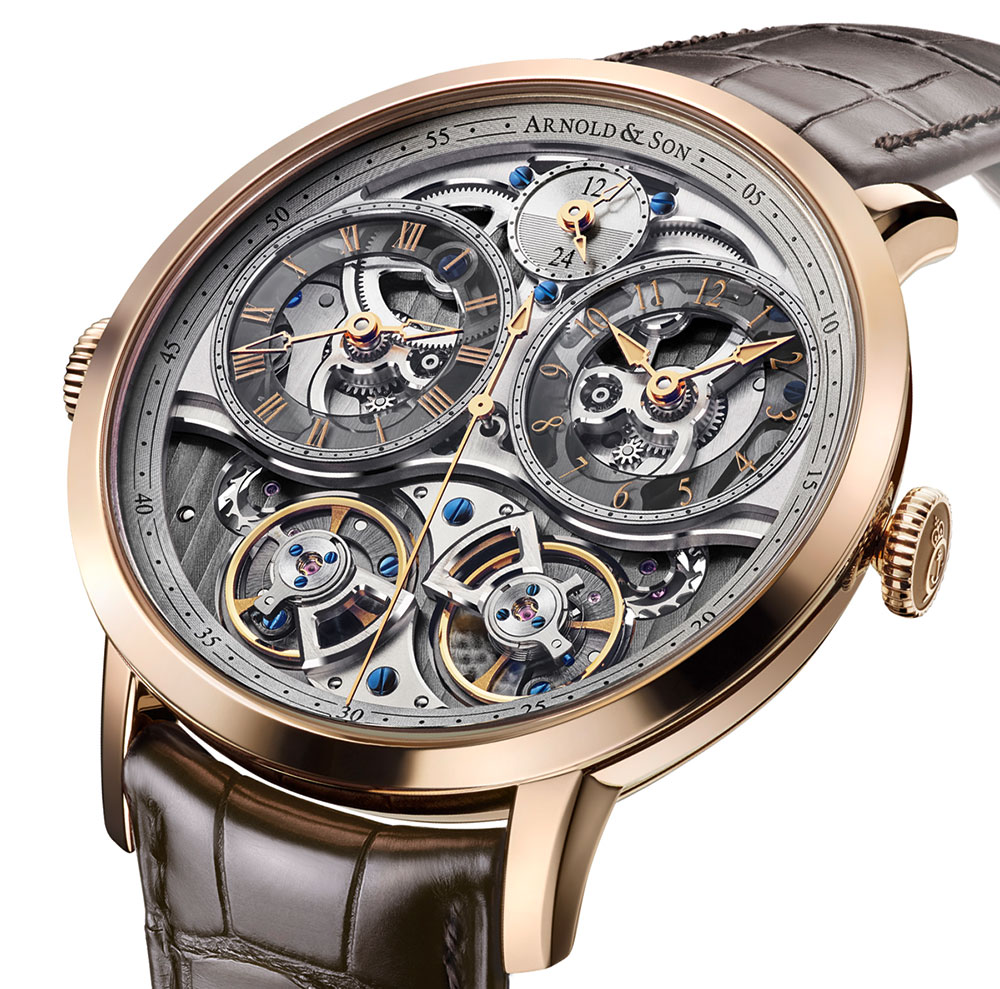 For Baselworld 2017, Arnold & Son unveiled yet another masterfully skeletonized watch that carries the brand’s conceptual DNA forward. The Arnold & Son DBG Skeleton is the newest addition to the DBG (Double-Balance GMT) collection which we reviewed the original, non-skeletonized version of in greater detail here back in 2013. For those unfamiliar with this piece, it’s basically two movements which share a winding system, housed in one watch. Skeletonized, this watch looks incredible and is the perfect example of Arnold & Son’s relentless progress. 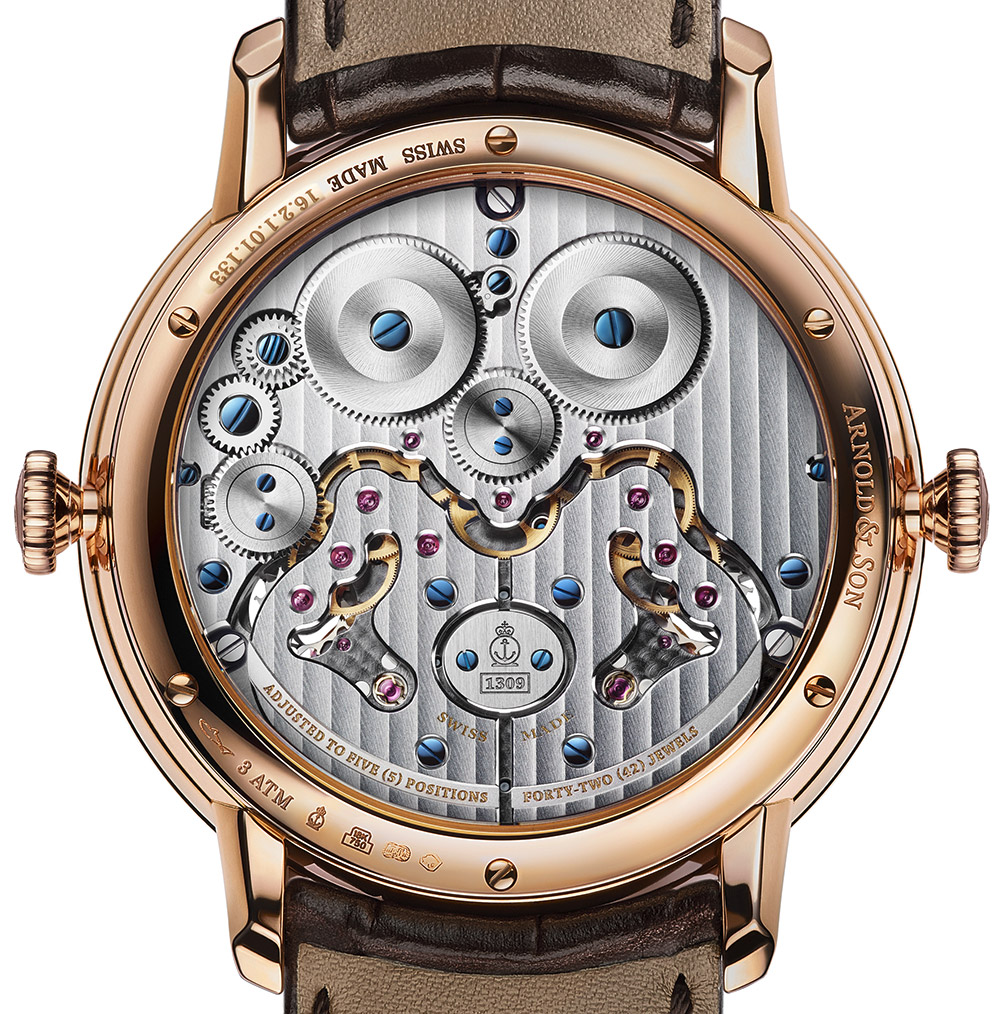 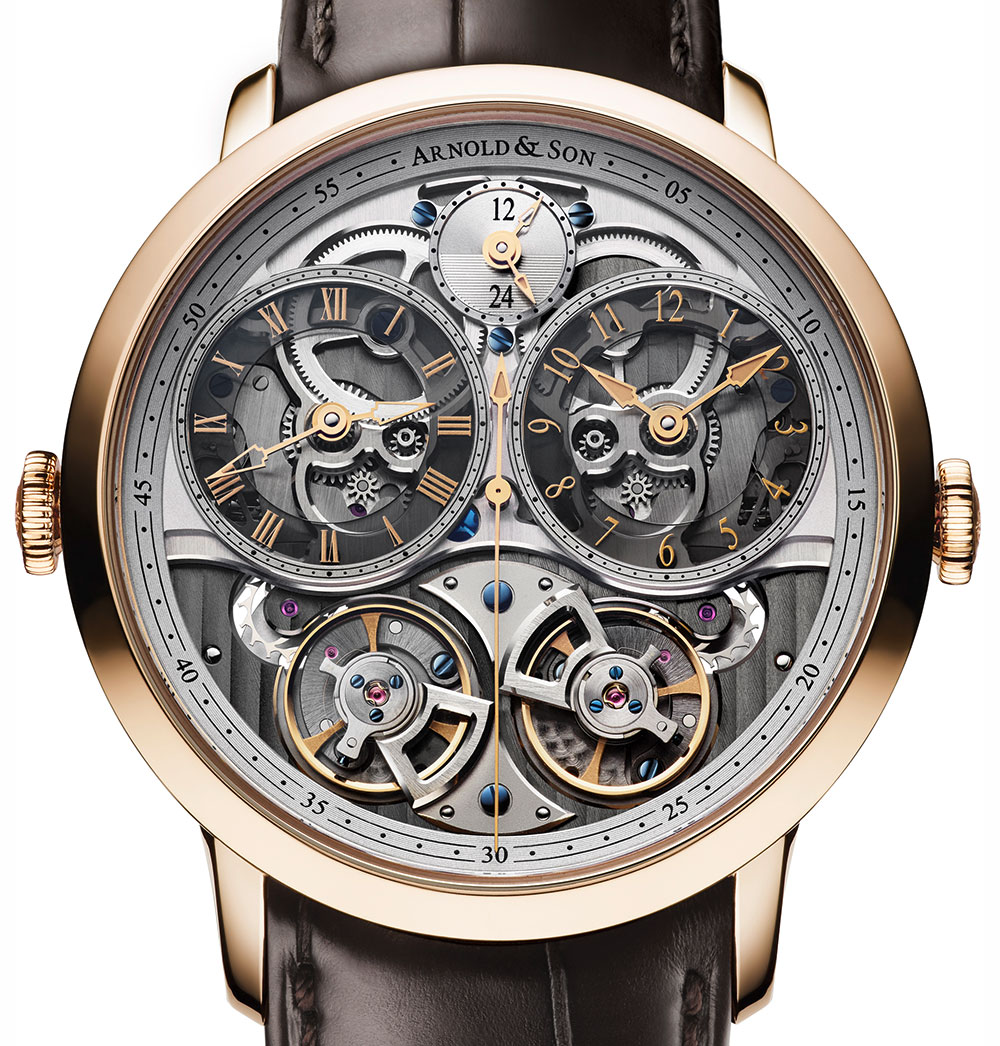 First, a little bit more about Arnold & Son’s DBG system. Each time display is powered by its own barrel, with its own gear train, escapement, and balance, while sharing a single winding system. While this isn’t necessarily unprecedented, because of the offsets of the shared components compared to the independent components, it’s not always pretty, and rarely skeletonized. However, with the DBG Skeleton, we see almost perfect symmetry on the dial and caseback. 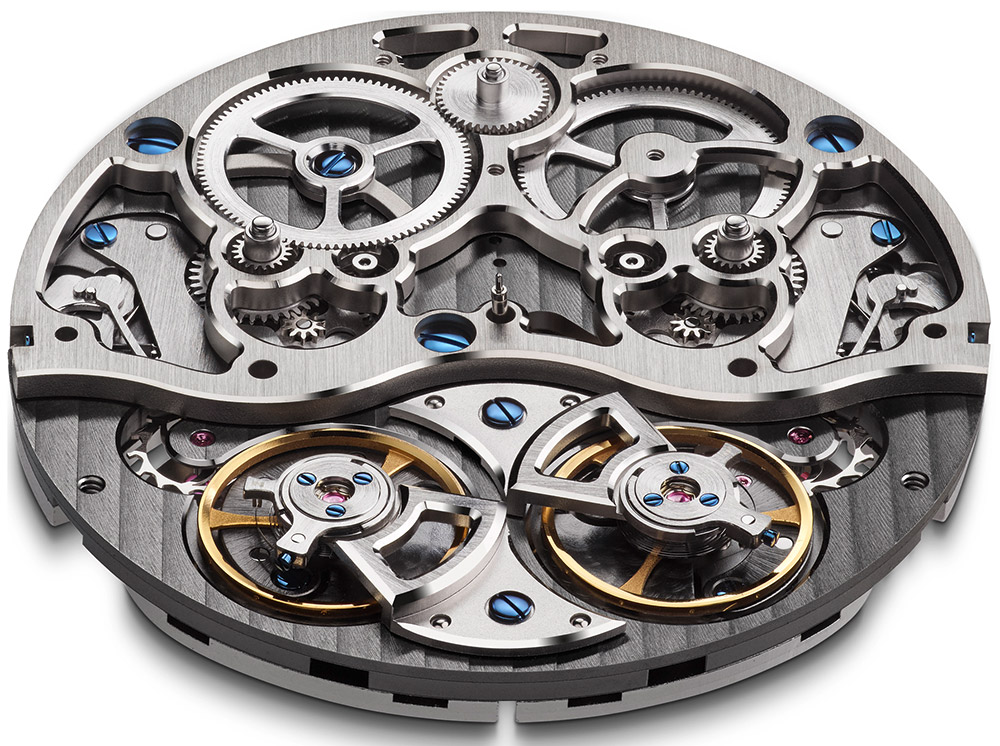 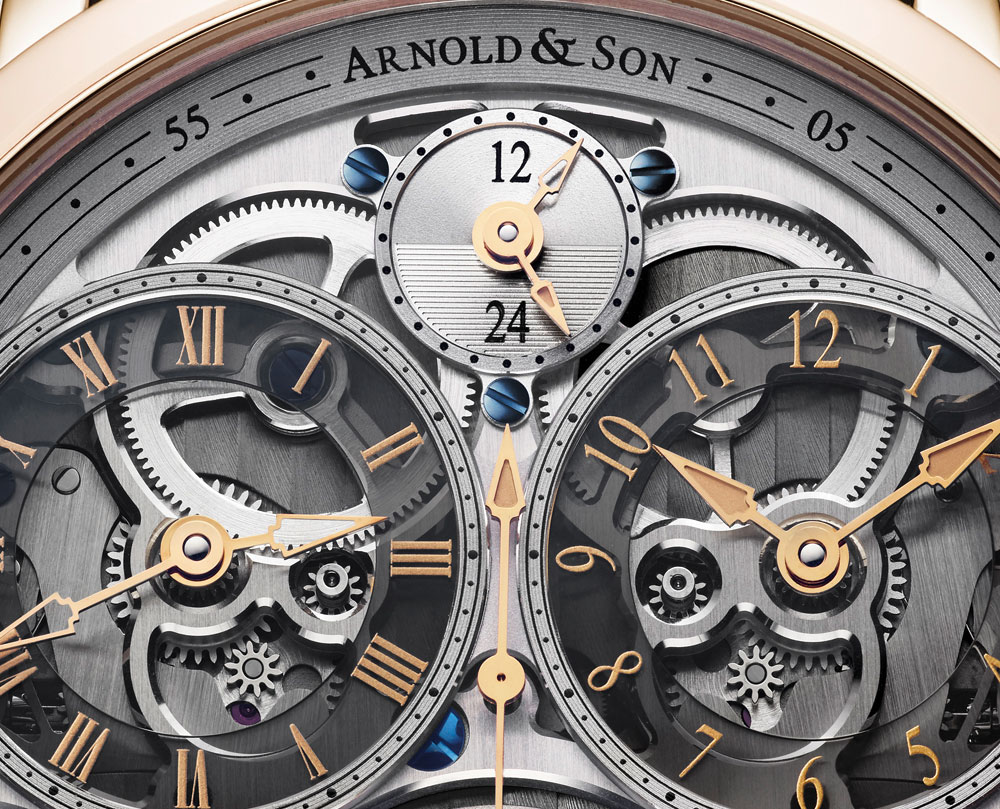 The unusual nature of the in-house A&S1309 movement allows for some added mechanical and practical benefits. For instance, because of the separate barrel, gear train, and escapement/balance, the GMT function includes a “minutes” hand instead of the standard 24-hour counter only. Each time zone display in the Arnold & Son DBG Skeleton can be set to incremental quarters of the hour. So for some Indian, Australian, and Canadian time zones that are off by half-hours, for instance, the watch can account for that. Additionally, the Equation of Time display at 12 o’clock determines the difference between each display, as well as whether it’s day or night in the second time zone. The A&S1309 beats at 21,600bph and features a 40-hour power reserve. 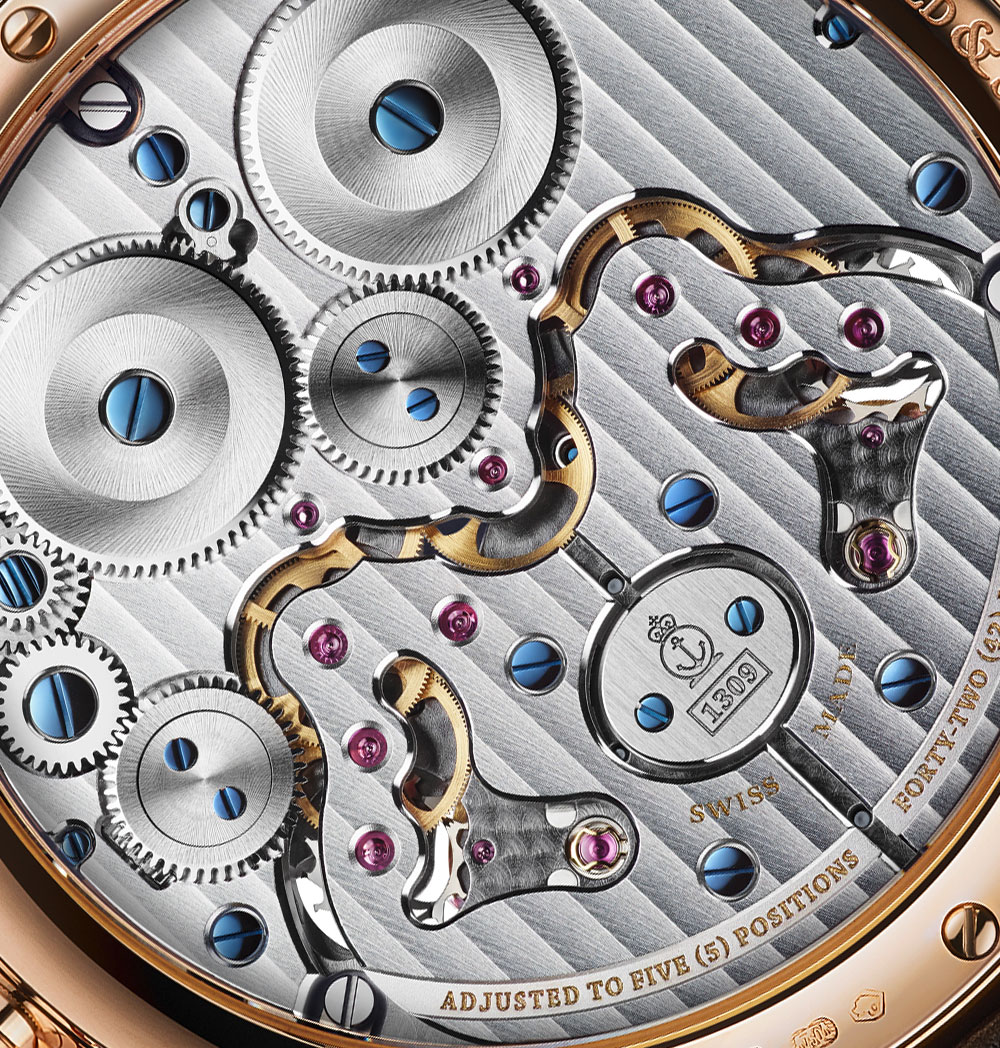 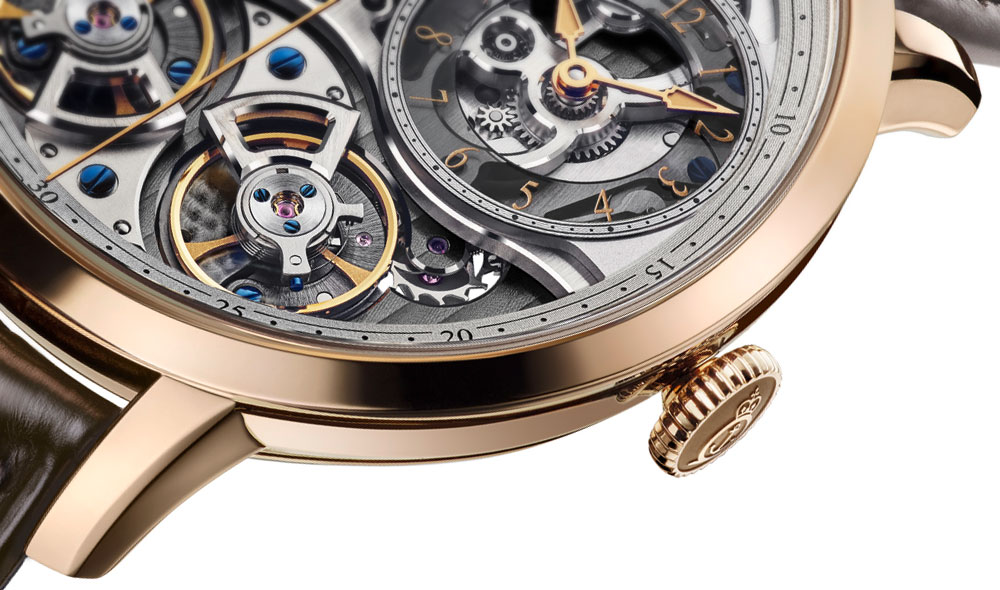 The case measures in at 44mm, will be available in rose gold, and is water-resistant up to 30m. The dial is completely skeletonized with dual balances set against Côtes de Genève stripes, providing a nice contrast and additional symmetry. The time zone indicators, as with previous models, differ with Arabic and Roman numerals against an increasingly popular smoked backdrop. I feel these add an eclectic touch to almost identical halves of the watch. Since the movement does feature independent time zone components, each time zone is managed by its own crown, or “ears” as some enthusiasts refer to them, at 3 and 9 o’clock. Each time zone is set with its individual crown, while the watch is wound solely by the crown at 3 o’clock. 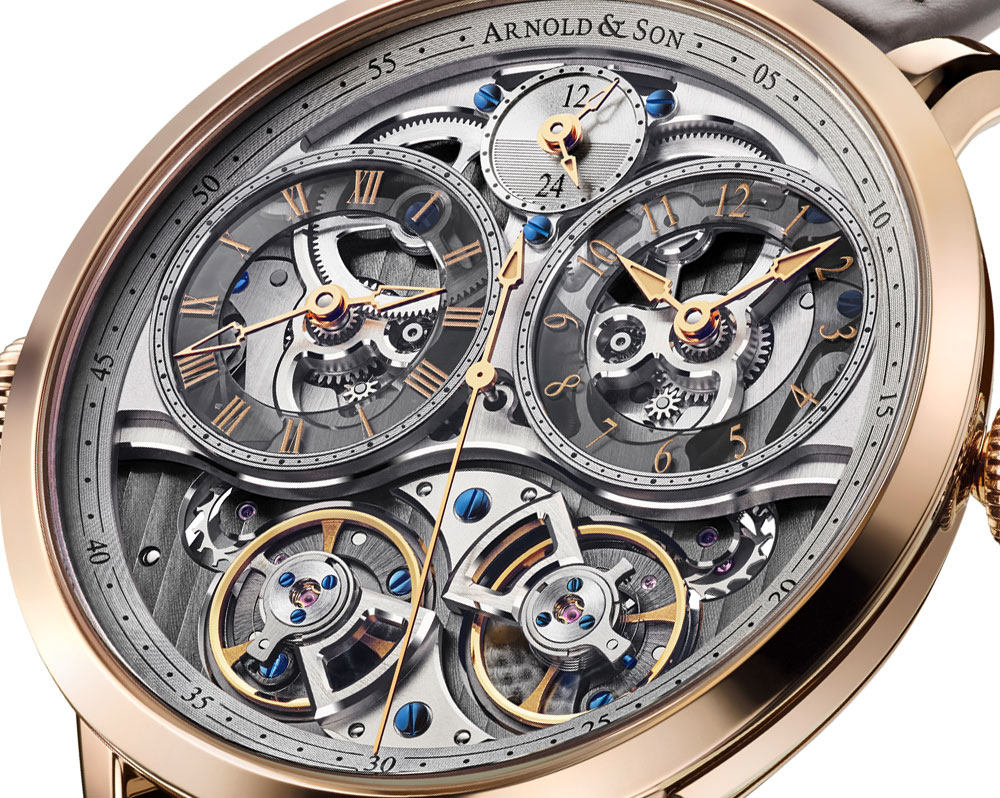 Overall, the aesthetic refinements to the dial and the symmetry of the Arnold & Son DBG Skeleton watch will refresh and breathe new life into the Arnold & Son DBG. It manages to display the intricate and impressive details of a very complicated timepiece without delving into the “too busy” category that many tend to fall into when tackling such a complex endeavor. While I can definitely see a white gold or platinum option in the future, I feel this is a welcome addition to the collection, and one I would be excited to wear. The Arnold & Son DBG Skeleton Ref. 1DGAP.S10A.C120P will be limited to 30 pieces and will carry a price of $38,850 which is actually a few thousand dollars less than what the original DBG watch in gold cost. arnoldandson.com