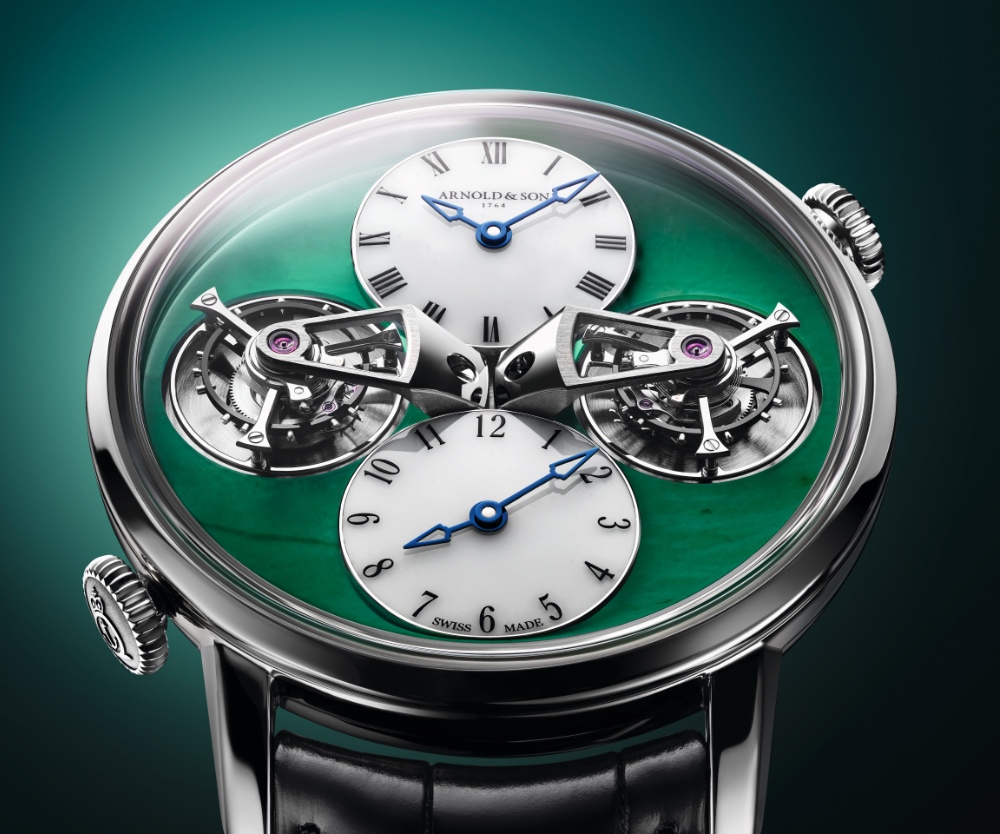 Launched in 2014, the Double Tourbillon is one of Arnold & Son’s most complicated watches. It is actually categorized under the brand’s Grand Complications lineup. Essentially, it’s a dual-time watch but one that is fully independent. That is to say, you can set the time in one time zone without affecting the other. To do that, what Arnold & Son has done is crammed two going trains into a single watch case. It’s no mean feat. And now, Arnold & Son is launching a new version called the Double Tourbillon Jade, which features dials made of both jade and opal. 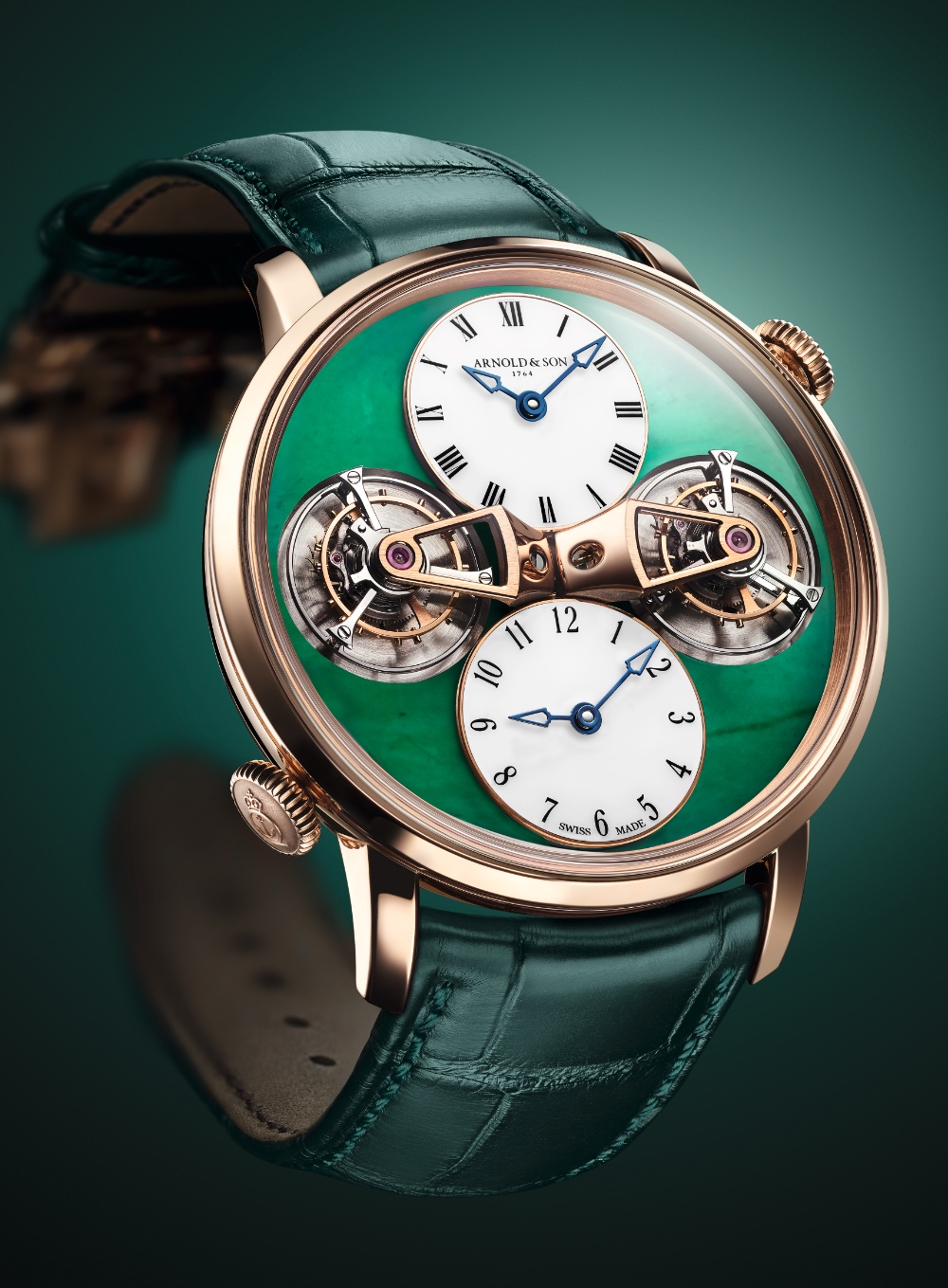 Like the original Double Tourbillon from 2014, the new Double Tourbillon Jade is available in white and red gold. Case dimensions are unchanged, so you have a diameter of 43.5mm. Admittedly, that’s quite large for a classically-styled watch, but remember, this watch houses two going trains. Water resistance is also unchanged at 30 meters, so be sure to keep it away from liquids. 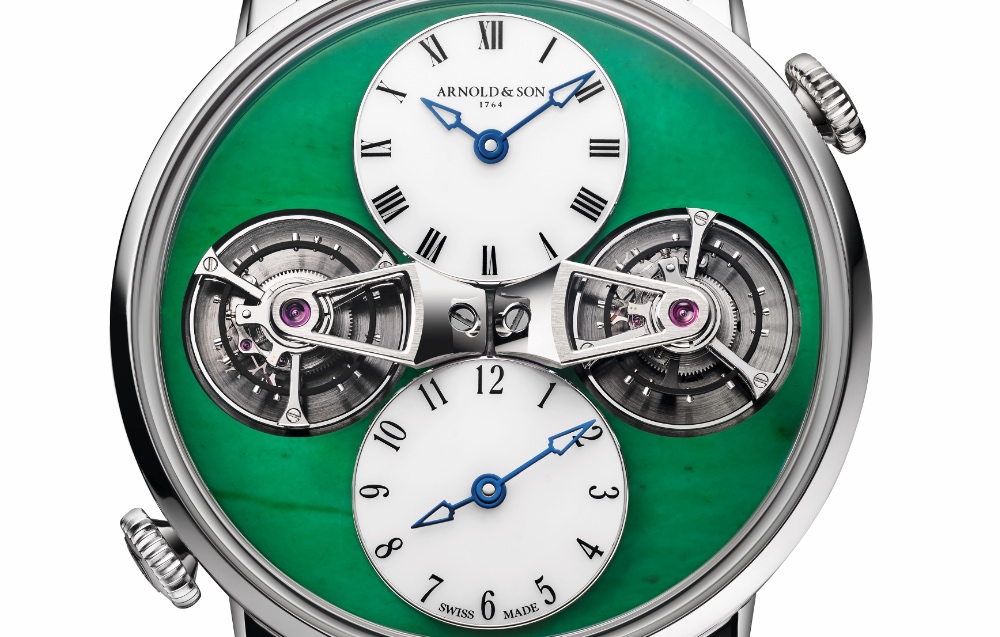 The highlight is obviously the dial. The bright green main dial is made from jade, which is sourced from Wyoming. Arnold & Son chose it specifically for its brilliant hue and its slight black veins. Additionally, Jade has a rich history in Central American and Asian cultures. The Chinese, in particular, consider it to be a lucky stone. And how can we forget the twin tourbillons? Nestled across each other at 3 and 9 o’clock, the tourbillons feature prominent hand-polished and chamfered bridges rendered in matching case materials. Because of how the bridges rise from the dial, the watch features a heavily domed sapphire crystal.

Contrasting the rich green Jade dials are two white subdials made from opal. These represent the two time zones. To differentiate them, one has Roman numeral hour markers while the other has Arabic numeral hour markers. Both have blued open-worked hour and minute hands. Time on the dials can be independently set using the crowns at 2 and 8 o’clock. Since they are independent, the watch can easily accommodate time zones that are offset by 15, 30, or 45 minutes. 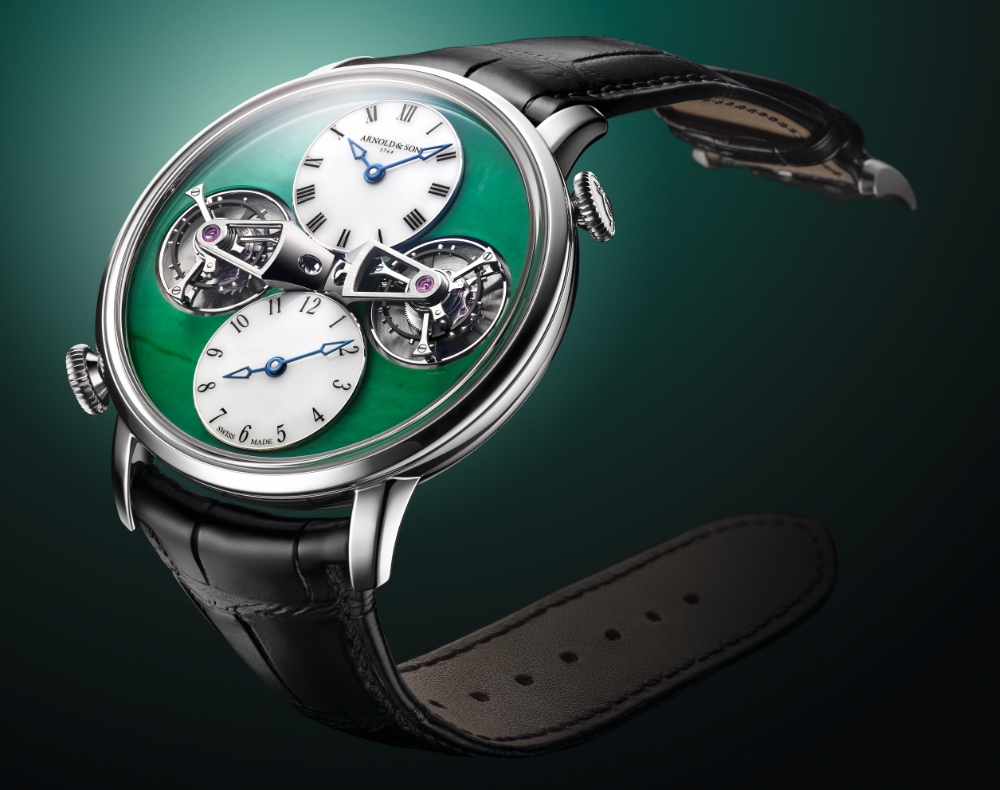 The movement within is the in-house caliber A&S8513, which is visible through a sapphire display caseback. This hand-wound caliber beats at 3Hz and features twin barrels providing a power reserve of 90 hours. It is heavily decorated with Côtes de Genève on the main plate, coated bridges that are polished and chamfered by hand, satin-finished wheels, beveled and polished screw heads. It’s also adjusted in five positions. And at 37.3mm-wide, it fills up the case nicely. 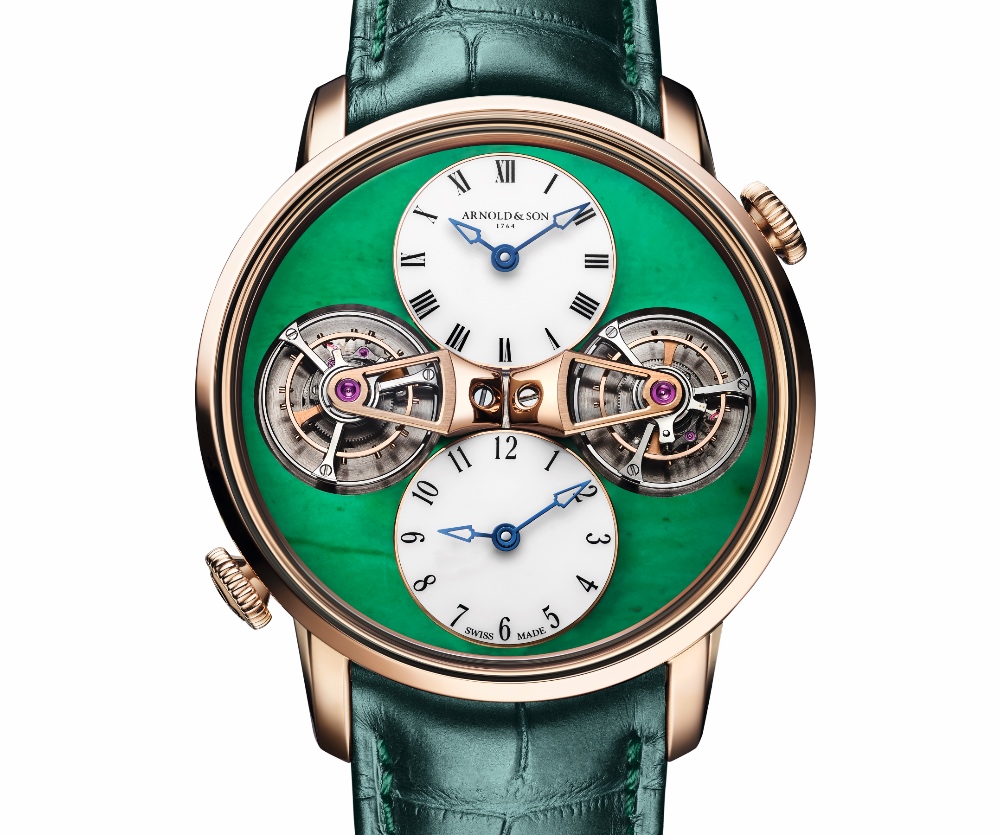 It’s been a while since we had a new version of the Double Tourbillon, and this new model couldn’t have come at a better time. With travel resuming in many parts of the world, surely there will be an increase in demand for dual time watches. And as far as travel watches go, I can think of that are as elegant. Furthermore, the Arnold & Son Tourbillon Jade is unique — there will only be one piece in white gold and another in red gold. The price is 198,000 Swiss Francs. For more information, visit the brand’s website.