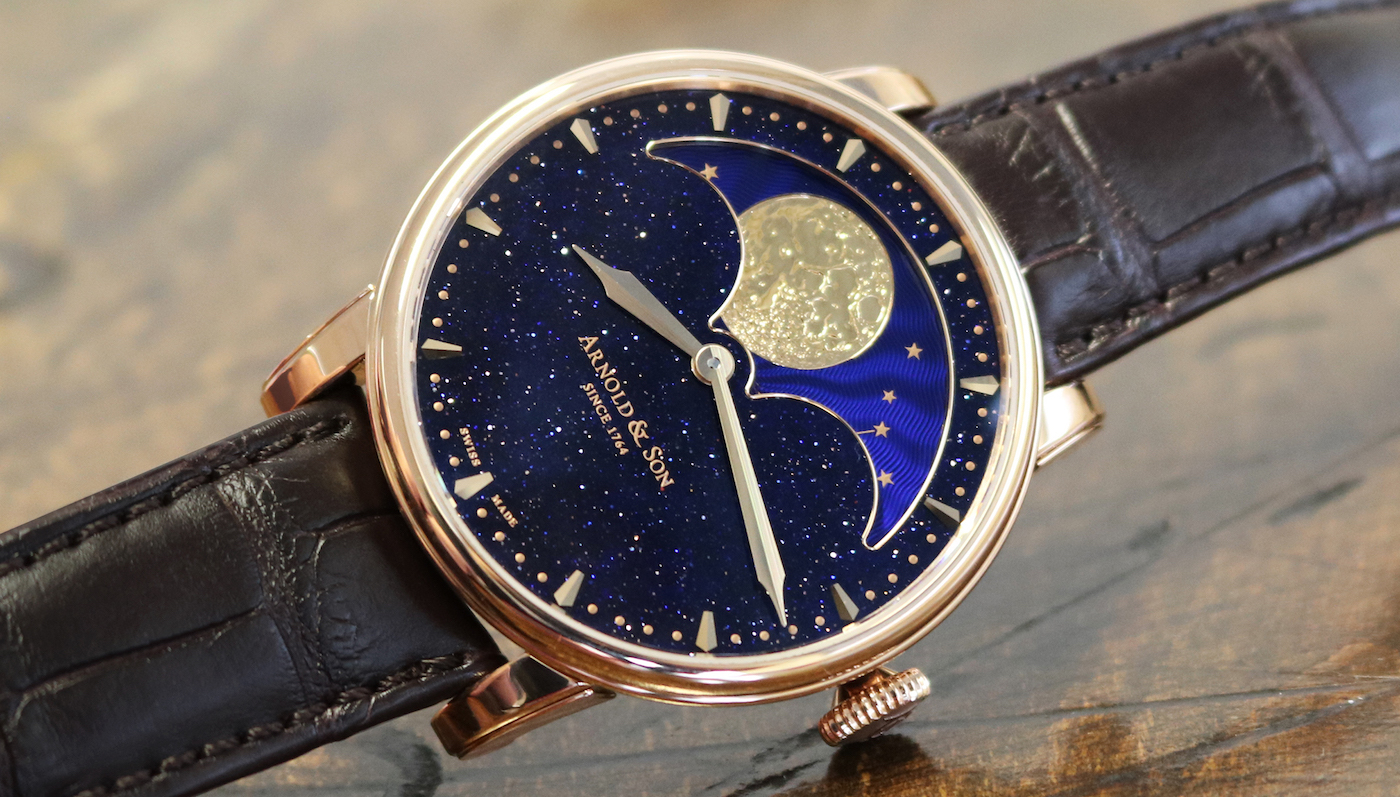 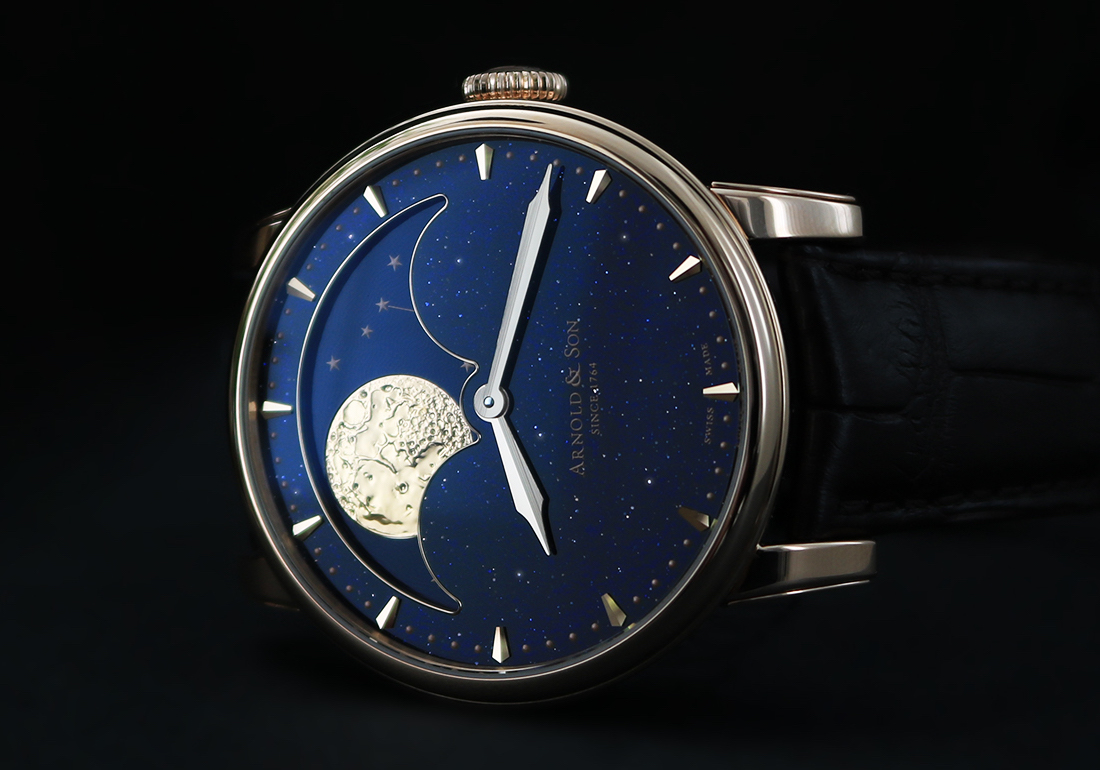 And that’s exactly what I like about it. Moon phase complications are a microcosm of modern mechanical watchmaking. And they look really pretty, too. 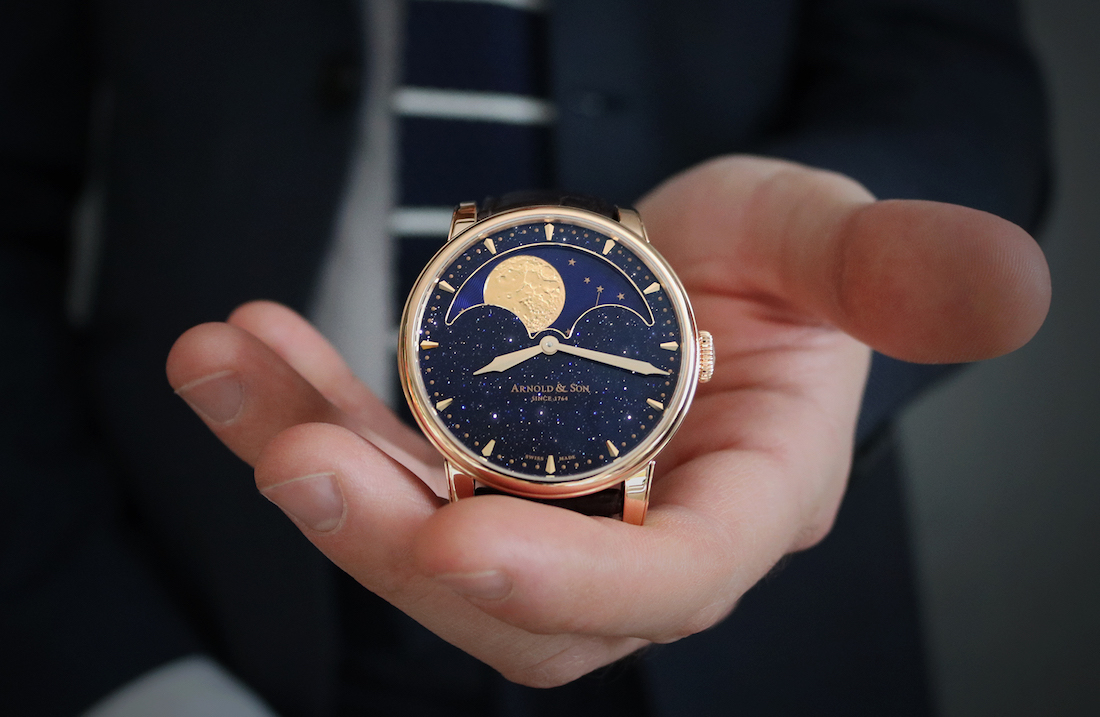 The Case and Dial

Crucially, the dial of the Arnold & Son HM Perpetual Moon Aventurine watch is described as “aventurine stone,” as opposed to aventurine glass, which is the cheaper, more stable material often used in watchmaking. 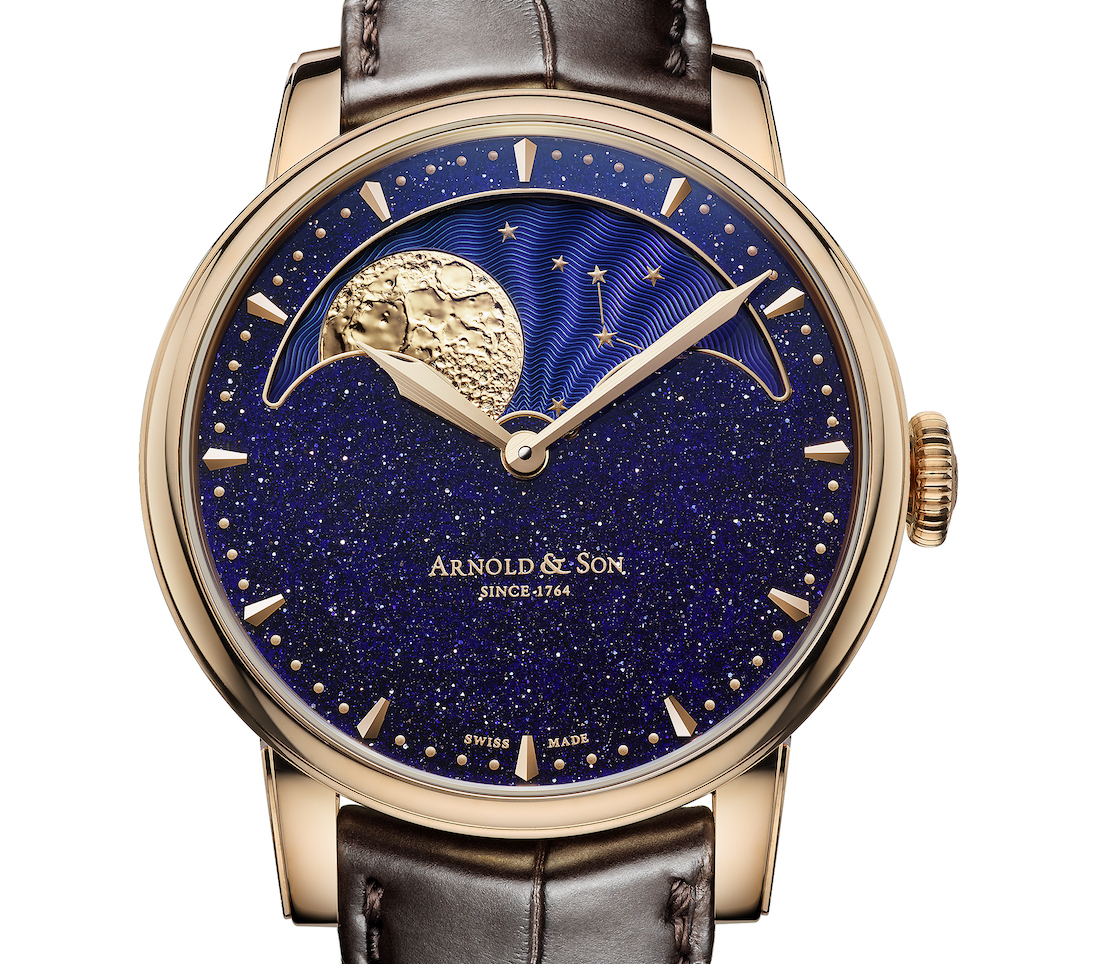 A deep blue guilloché pattern decorates the moon disc. The colors of the disc, the aventurine, and the 42mm, 5N red-gold case work fantastically well together. The brand’s British history inspired this design; consequently, the chosen palette certainly has a regal feel to it. 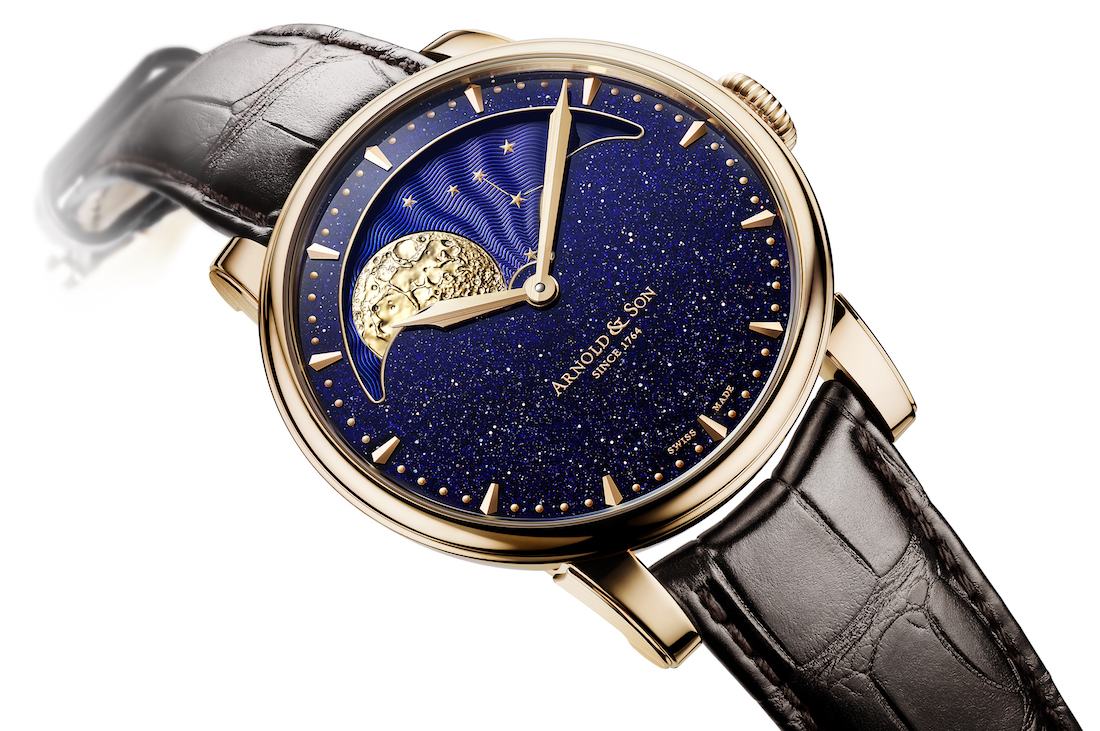 Relatively stout lugs increase the wearability and dressiness of this watch. In some kinds of light — especially that used for the lifestyle shots you see featured in this article — the watch appears more yellow-gold than red. That said, the watch looks equally attractive, to my eye, in both hues. Perhaps even nicer in the real-life imagery, as opposed to the renders. 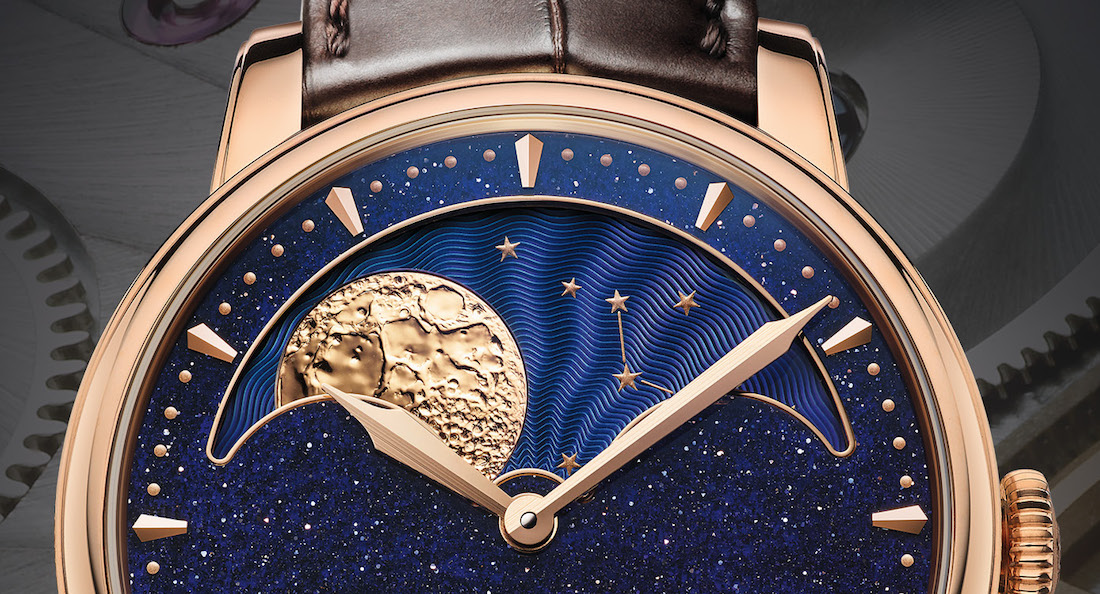 The moon disc is a staggering 29mm in diameter. The moon occupies 11.2mm of real estate, itself. Unsurprisingly, Arnold & Son has chosen to draw so much attention to the complication because of its accuracy. The Arnold & Son HM Perpetual Moon Aventurine watch will find itself just one day out of sync every 122 years. Upon correction, the watch will remain in sync for another 122 years. Thanks to the simple pusher, requiring just a single depression, the correction mechanism is incredibly straightforward. 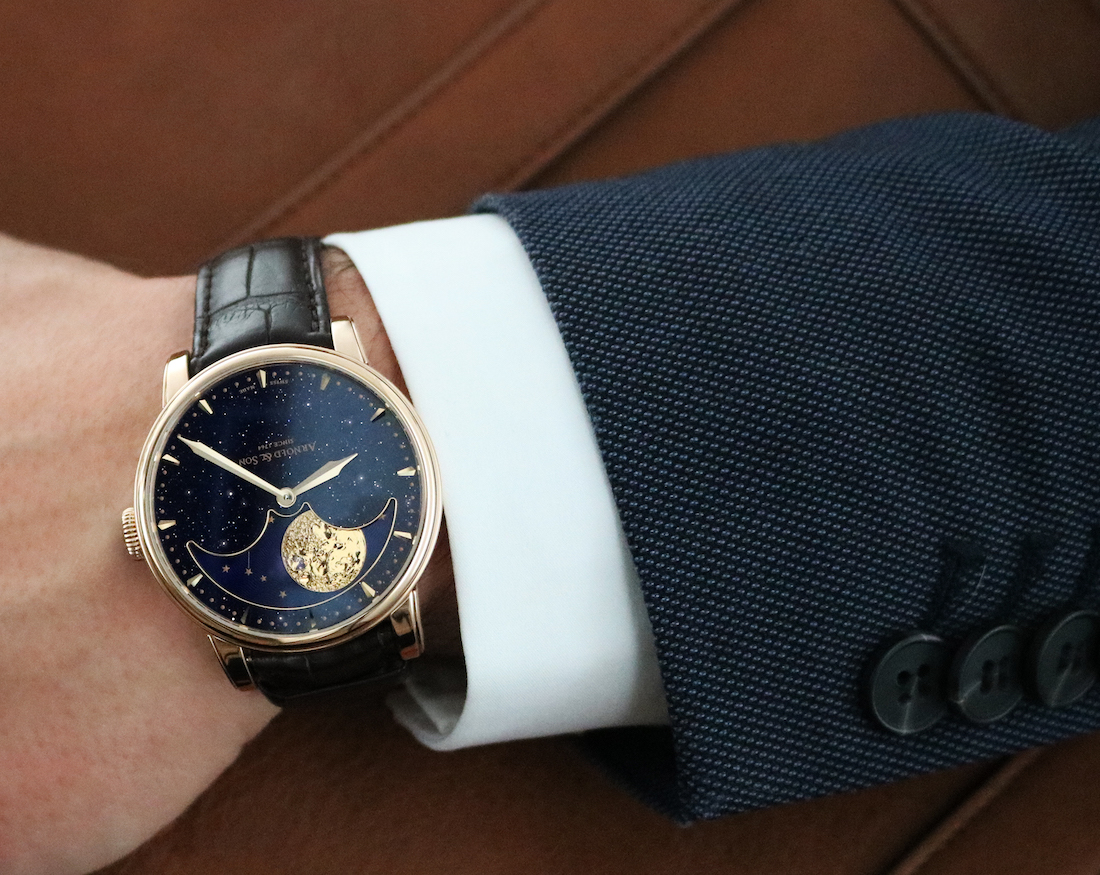 The Arnold & Son HM Perpetual Moon Aventurine is powered by the exclusive hand-wound A&S1512. An integrated moon phase complication helps achieve the relative slimness of the movement, which comes in at 5.35mm. Handsomely finished, the twin-barrelled, 21,600vph A&S1512 offers an impressive 90-hour power reserve. The use of the word “exclusive” when referring to this movement pegs it as proprietary, not in-house.

The unusual addition of a second moon phase tracker, visible through the sapphire display back, facilitates the easy correction system. Neat little touches like this add up when designing a new movement, and even if Arnold & Son didn’t make it themselves, it is made for them and them, alone, by a specialist who understands the craft. 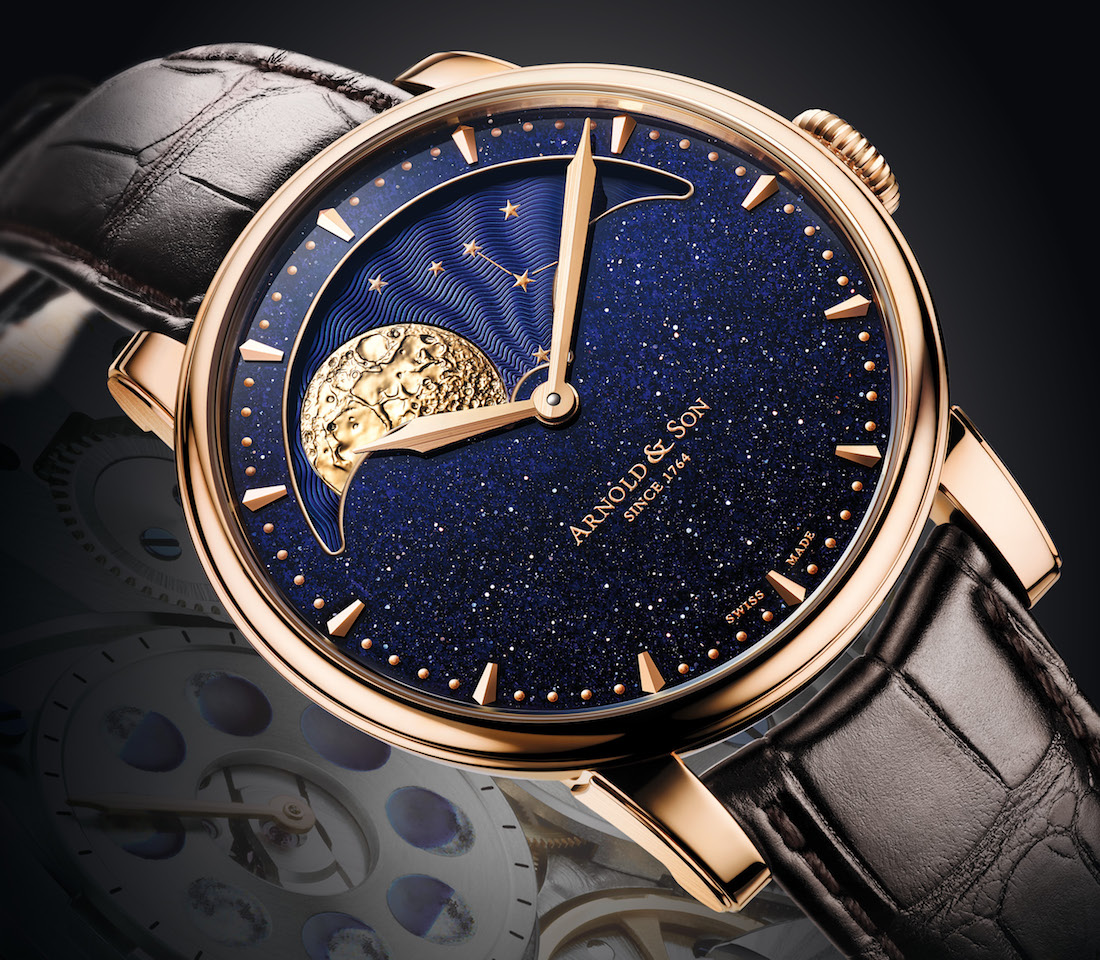 I think Arnold & Son has done well with limiting the production of this piece. It was certainly a smart move to keep the numbers low. It’s a crowded market for this style of watch and an even tougher realm for watches at this price-point. The 28-piece limited run of the Arnold & Son HM Perpetual Moon watch will retail at $33,650 per unit. Visit arnoldandson.com to learn more.