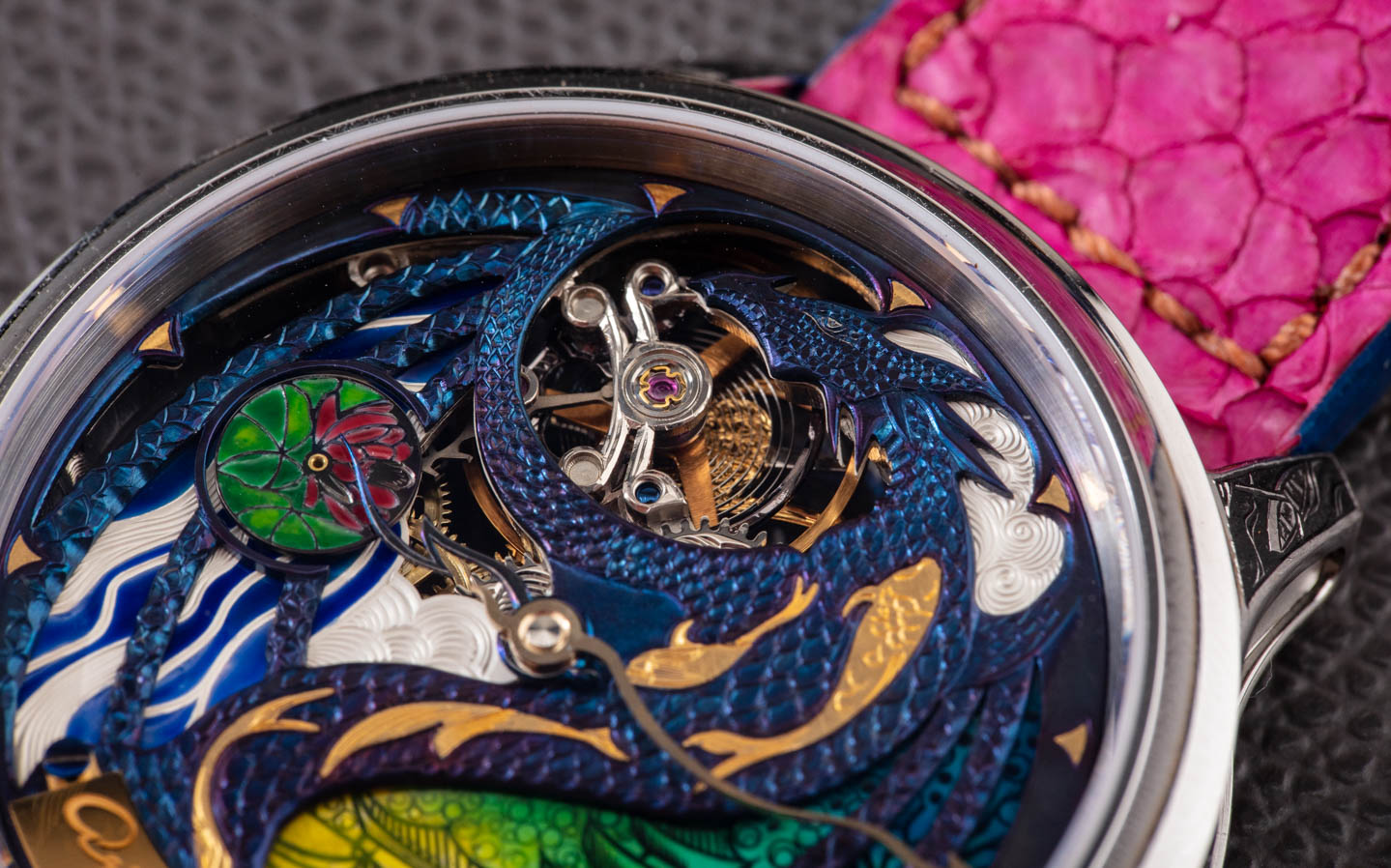 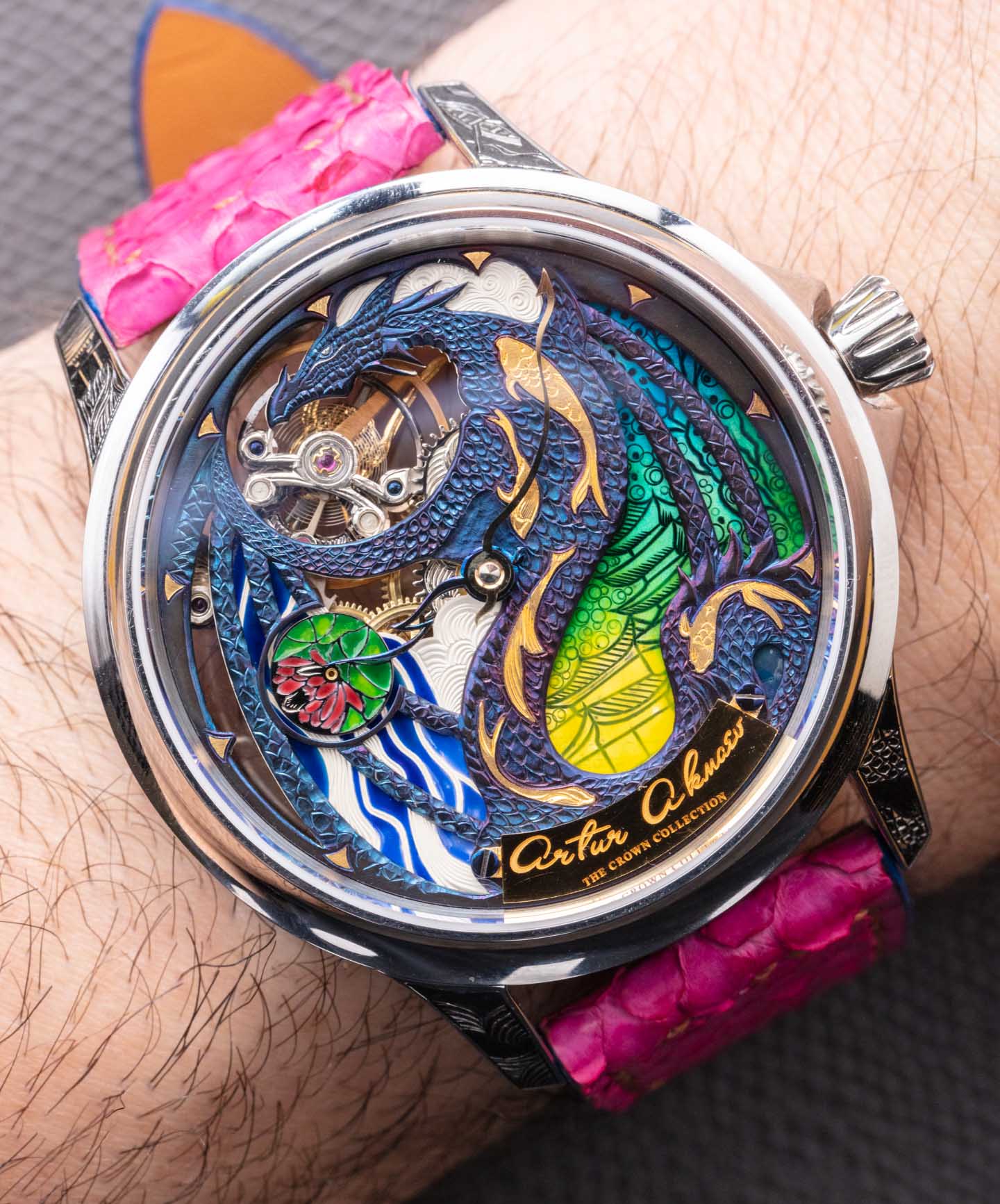 Artur Akmaev is a Russian-born watchmaker and engraver who currently lived and works in Los Angeles. Akmaev has worked in the background performing certain tasks for other brands, as well as making a series of on-off timepieces that feature elaborately-designed and decorated dials rich with hand-engraving and painting. Artur Akmaev is now starting to develop a more serious eponymous brand around his work, and today I’d like to show you this one-of-a-kind “Rise Of The Blue Dragon” timepiece that will be the start of a new series of dragon-themed timepieces produced by the Los Angeles artist.

The Rise Of The Blue Dragon watch is part of Akmaev’s artistic exploration of Far East-style dragons mixed with modern fantasy themes. The watch is for sale via an art gallery in Los Angeles known as The Crown Collection. Akmaev specifically wanted to emphasize a range of artistic techniques on the watch dial, as well as emphasize bright colors. In that pursuit, I believe he succeeded. The elaborate dial presentation is rendered in blue, with green, yellow, and pink tones. This is done using a mixture of flame-bluing over metal as well as miniature dial painting. The dial also employs a range of hand-engraved artistic techniques that extend on to the movement as well as to parts of the case (such as the lugs). 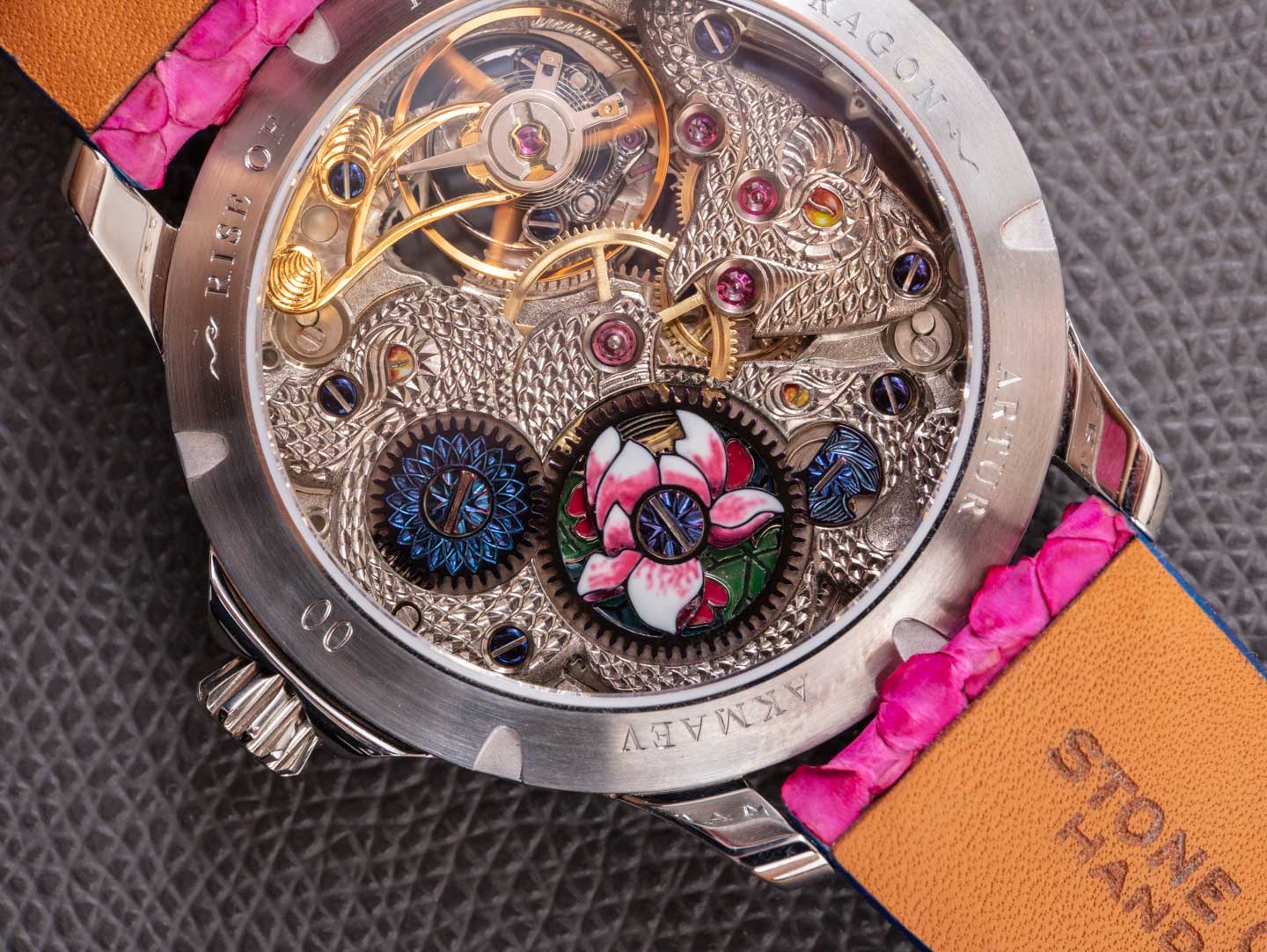 Artur Akmaev claims that the Rise Of The Blue Dragon watch is the result of about 180 hours of human effort to assemble and produce. He further claims that his sister, an illustrator, spent an additional 50 hours on the dial proof drawing, which is a larger composition that the dial engraving is based on. In fact, For particular special watches like The Rise Of The Blue Dragon watch, Artur Akmaev offers a print or even the original dial design drawing — a nice added-value to the timepiece kit.

The watch case itself is in steel and 45mm-wide and 12mm-thick. As stated above, hand-engraved decoration has been applied to the watch case lugs. Inside the watch is a base Swiss ETA Unitas 6497 manually wound mechanical movement. These long-standing base movements operate at 18,000 bph (2.5Hz) with a power reserve of about 56 hours. The movement includes central hour and minute hands, as well as a subsidiary seconds dial. For the purposes of The Rise Of The Blue Dragon watch, the seconds hand has been replaced by a small hand-painted and engraved disc with a lotus flower motif on it. 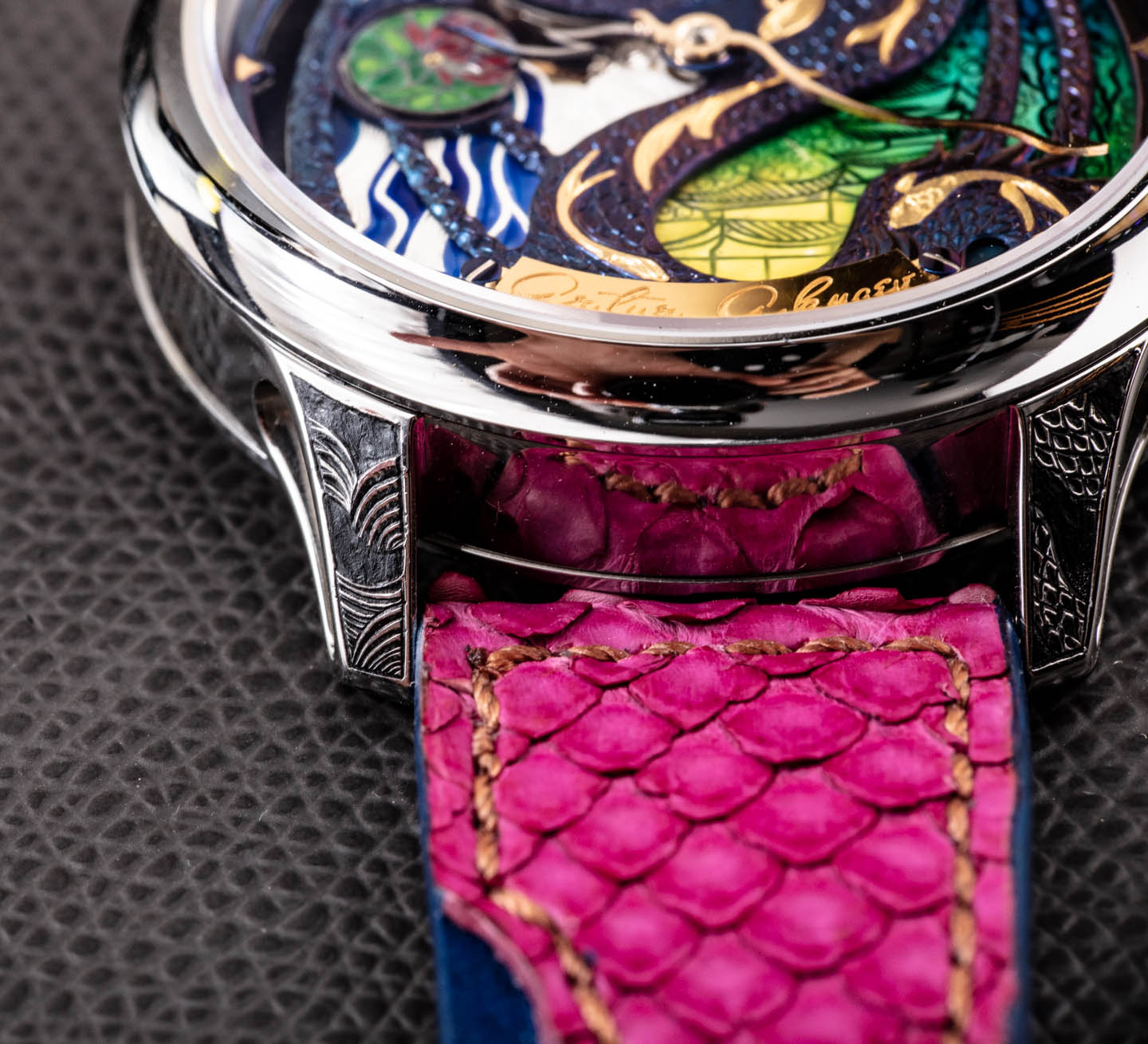 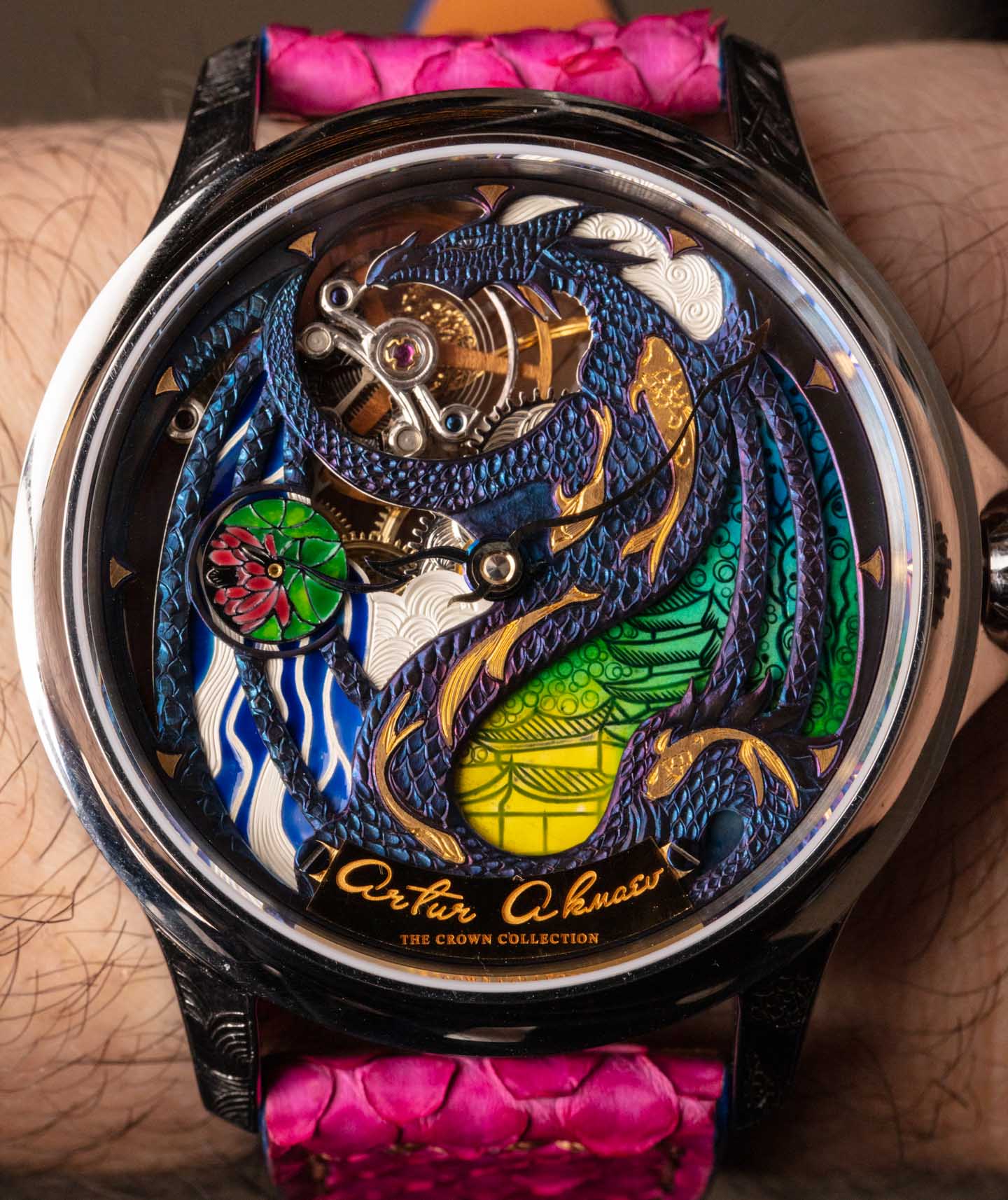 A similar floral design is used on the mainspring barrel, which can be viewed through the sapphire crystal window on the caseback of the watch. Much of the movement bridge is engraved with a series of patterns meant to evoke the sense of dragon scales. The entire composition was designed to be reworked for future timepiece designs. Artur Akmaev is personally interested in further exploring the dragon theme, so the basic dial layout and design of the Rise Of The Blue Dragon will be reused in future watches, but they’ll have their own particular colors and background graphics that will allow them to celebrate different themes. The goal of creating such a dial “template” is to allow Artur Akmaev to produce these artistic watches more efficiently so that they can be sold more affordably.

For the hands, Akmaev handmade them in shapes that evoke the look of dragon wings. Even though the hands are a good length and demonstrate good technique, they struggle to contrast effectively with the ornate dial. This inhibits legibility, but not fatally so. It is also good that Artur Akmaev designed small hour marker points on the dial. 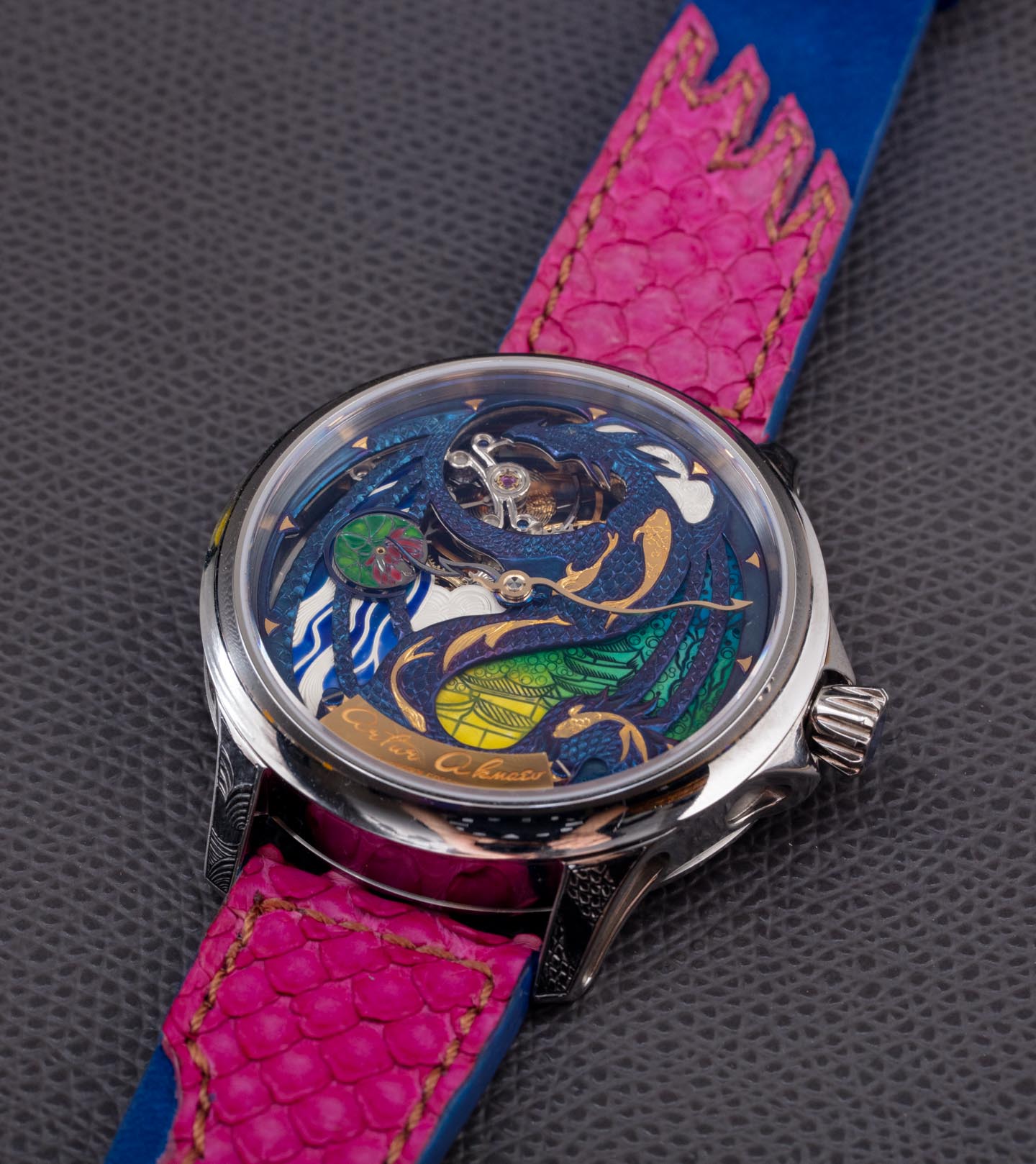 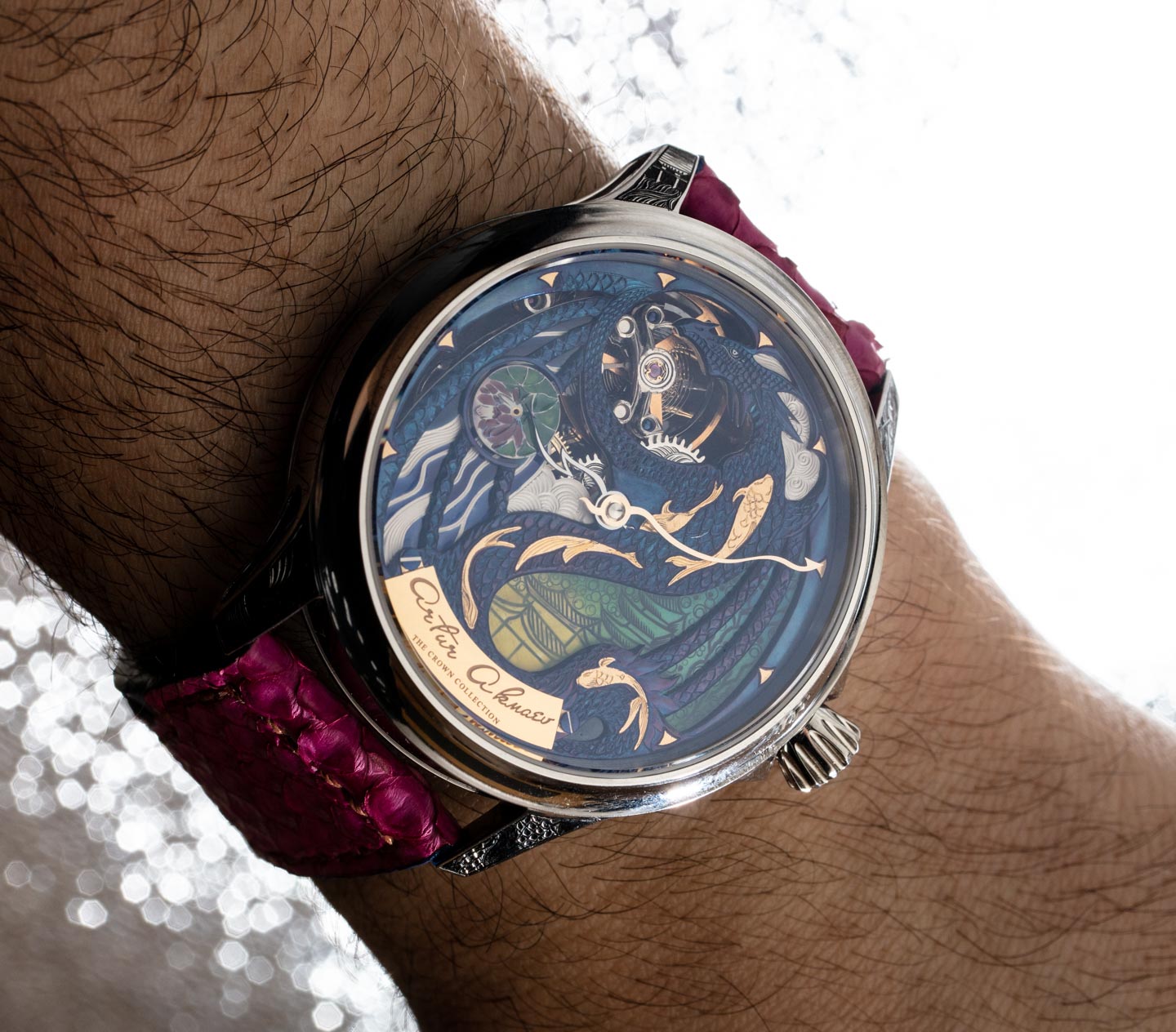 Comparing Akmaev’s work to highly renown engraving and enameling work that goes into the watches sold by the Swiss greats is expected. Are these comparable? That’s a good question. Akmaev is certainly newer and more amateur as compared to the highly refined skills which are often used to make the true high-luxury art watches from the “old names” in traditional watchmaking. Artur is younger and learning with each new watch. I’ve personally seen his work improve markedly over just a few years. A trained savant will be able to look at Artur’s engraving and see areas where improvements can be made. But here is the thing, you can’t get bespoke work like this, for this price anywhere in a Swiss brand. Akmaev is offering a type of service that is for the most part entirely unavailable to the majority of watch lovers – at any price. With his work, timepiece lovers can have real hand-made art on their watches done in a traditional technique, on their terms and for a price that is at least 1/4 or less of what it would cost from a major Swiss luxury house. So the value is there, you just have to understand how to best view it.

To complement the colorful The Rise Of The Blue Dragon dial, Akmaev has a bespoke strap produced here in the U.S., which is a blue leather base with pink-dyed python-skin “wings” sewn on to the top. Certainly, the strap is a bit on the flashy side (on an otherwise flashy watch), but I think it helps round out the spirited personality of the watch. Dragon-themed watches are by no means rare in the watch space, but what is interesting is how the dragon theme is expressed in so many different ways. I think Artur Akmaev will find more than enough watch enthusiasts interested in the particular way he hand-renders the mythical beasts on these very authentic timepieces.

This particular Artur Akmaev The Rise Of the Blue Dragon watch is available for sale through The Crown Collection in Los Angeles and has a retail price of $17,950 USD. See the Artur Akmaev Instagram channel here.