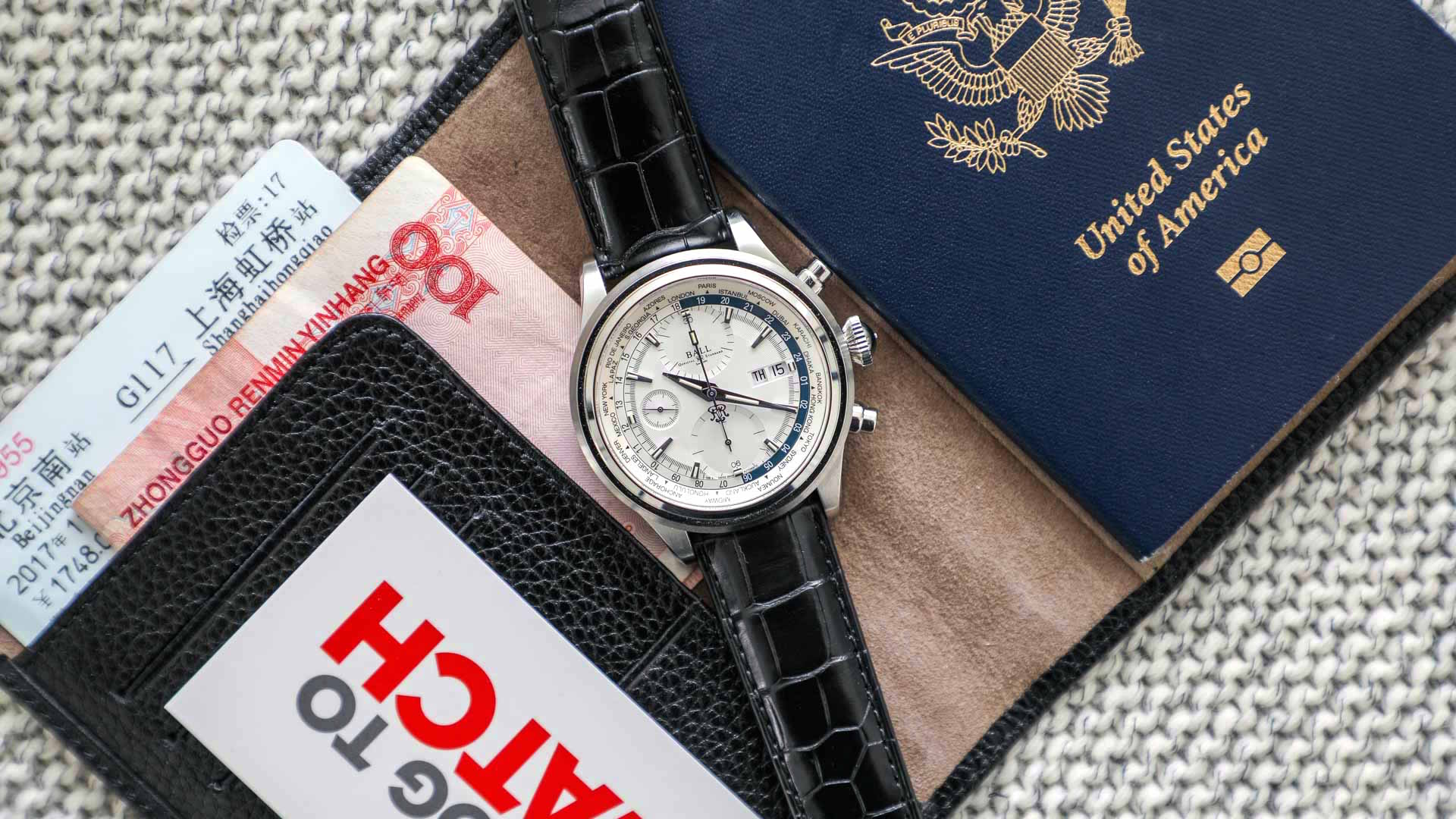 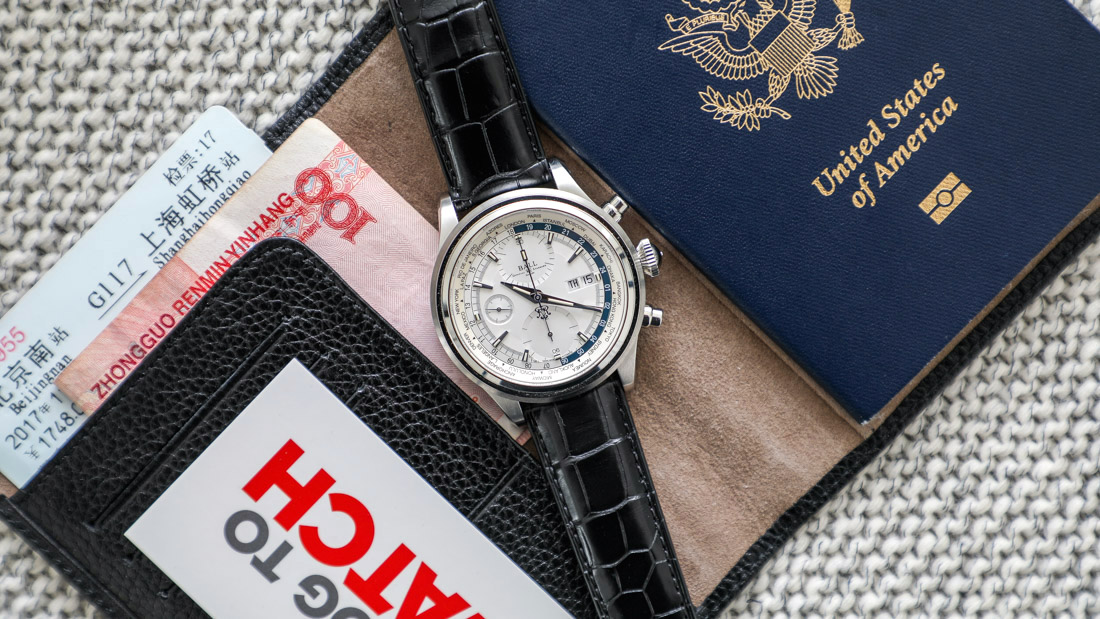 It’s not news that Ball Watch Co. makes some of the best under the radar and high-quality value proposition timepieces out there. Their shock resistance, impressive lume, and association with the American railroad system has been the cornerstone of the brand’s identity, but I was not expecting to be as taken with a watch that features two complications that I rarely appreciate together, especially at a price point just over $4,000. The Ball Trainmaster Worldtime Chronograph takes what could be a watch that’s bursting at the seams and through subtle design and color choices presents a timepiece that I preferred to wear as a dressier option that doesn’t have the bland personality or been-there-done that design of so many dressy chronographs out there. 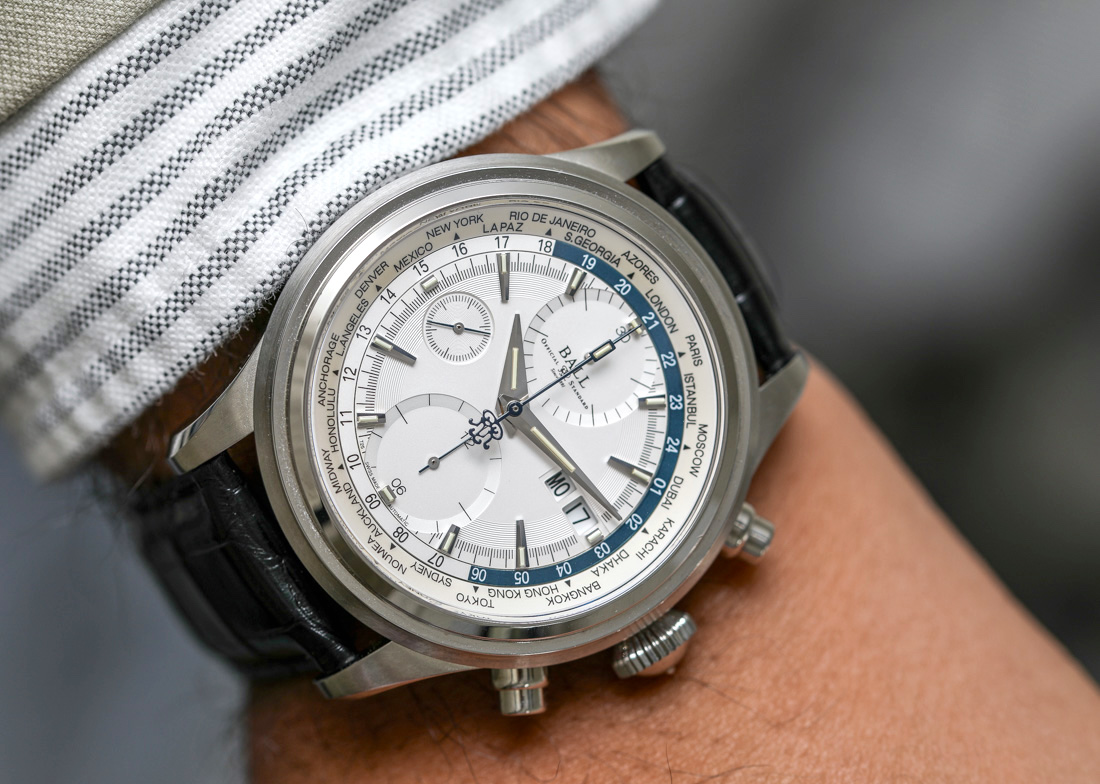 This is an updated version of the Trainmaster Worldtime Chronograph with mostly minor refinements. The total package is a solid and handsome watch with a an impressive set of complications, albeit in a watch that can wear a little thick and oftentimes be devoid of some personality (though I’ve seen plenty of worldtimers with too much personality). That being said, Ball is likely aiming for a very specific buyer type who is likely a well-versed collector seeking a unique watch that pulls off being a subtle worldtimer chrono. All things considered, the Ball Trainmaster Worldtime Chronograph offers a lot of impressive horological chops, handsome design, and good finishing for the money. 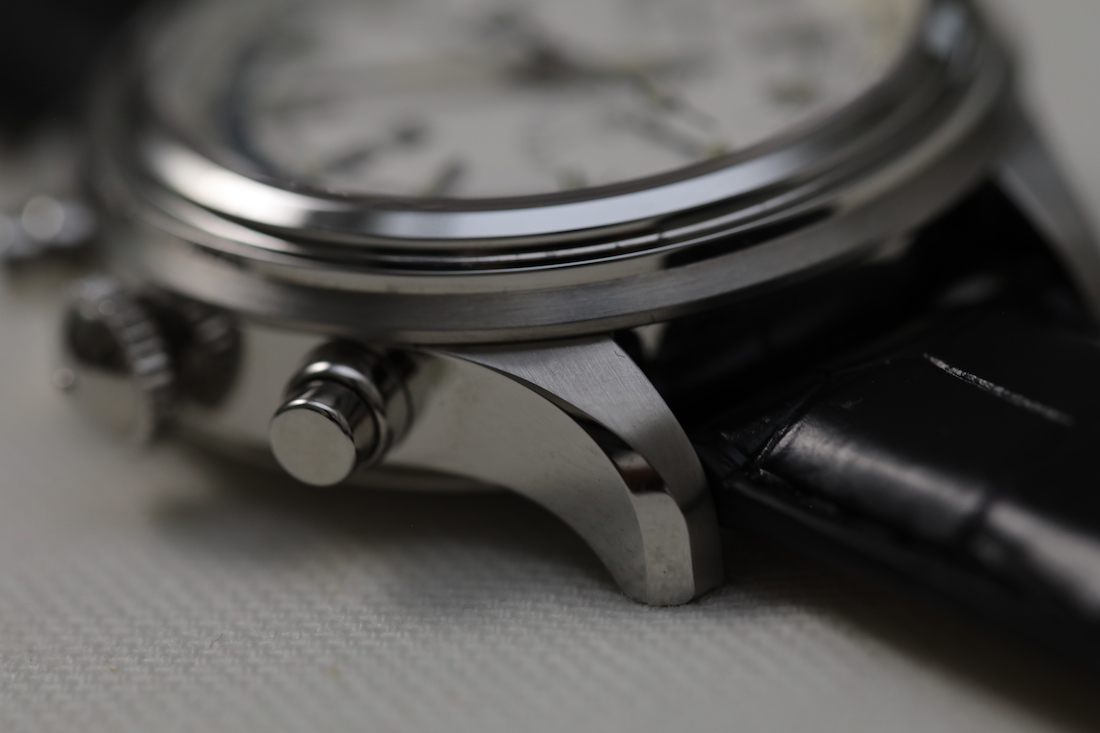 The Ball Trainmaster Worldtime Chronograph comes in a 42mm wide polished steel case that sits at a hefty 13.7mm thick. It is not close to being a slim watch and on a smaller wrist, I can see it being a bit of a problem. You’ll notice the pocket-watch style crown that looks somewhat like a desk-bell. Along with the stepped bezel, the crown adds some personality to the case. What this crown isn’t going to help with is water resistance, which is 50m so this is definitely a watch you want to keep on dry land. Not that a world time chronograph on a leather strap is what one imagines wearing while taking a swim, but still worth noting. 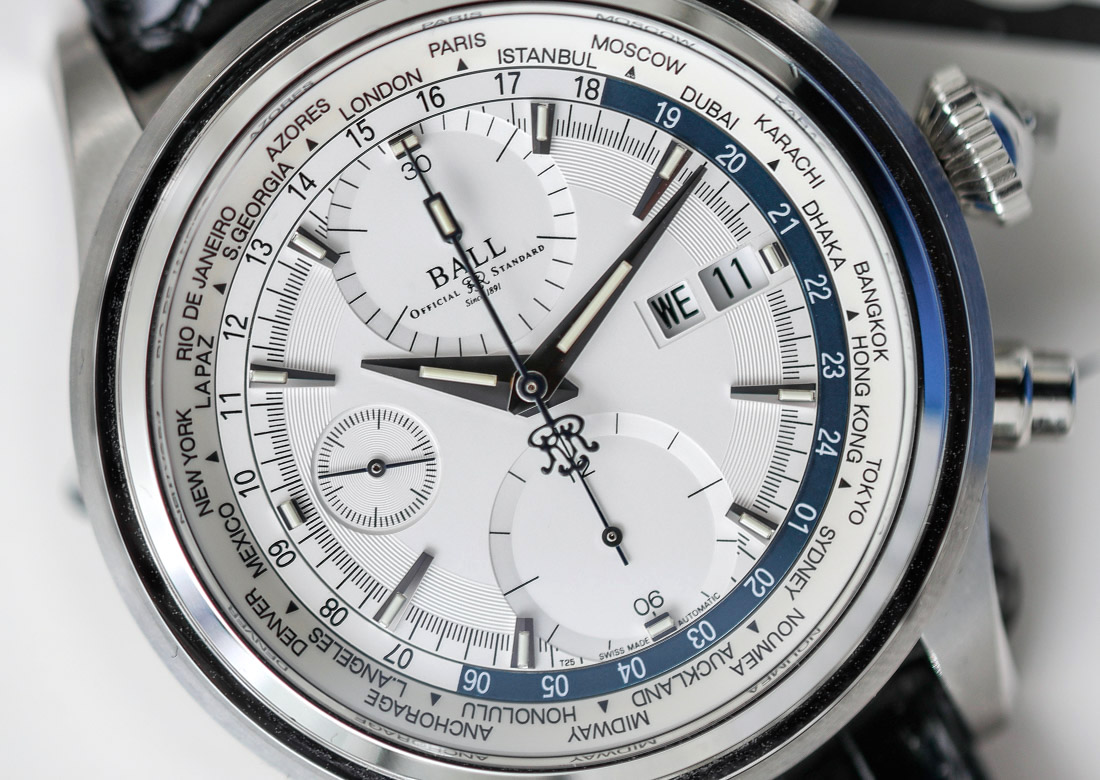 Looking at the dial, you can see the outermost city ring which stays in place. The slope of the city ring and clear black text on a white background makes for the names of cities to be easily readable. Granted, there are probably only a handful of times where I actually used the world time function, and I appreciate the legibility of all the city names here.

By unscrewing the crown and pulling once, you can advance the date with one upwards turn while one downwards turn moves the day of the week backwards. This is the only way to change the day and date since by pulling the crown out again, you can advance the time forwards or backwards. By advancing the time forward, the 24-hour ring (right below the city ring, with nighttime designated with a dark blue background) moves counterclockwise. Moving the time backwards does not affect the 24-hour ring. 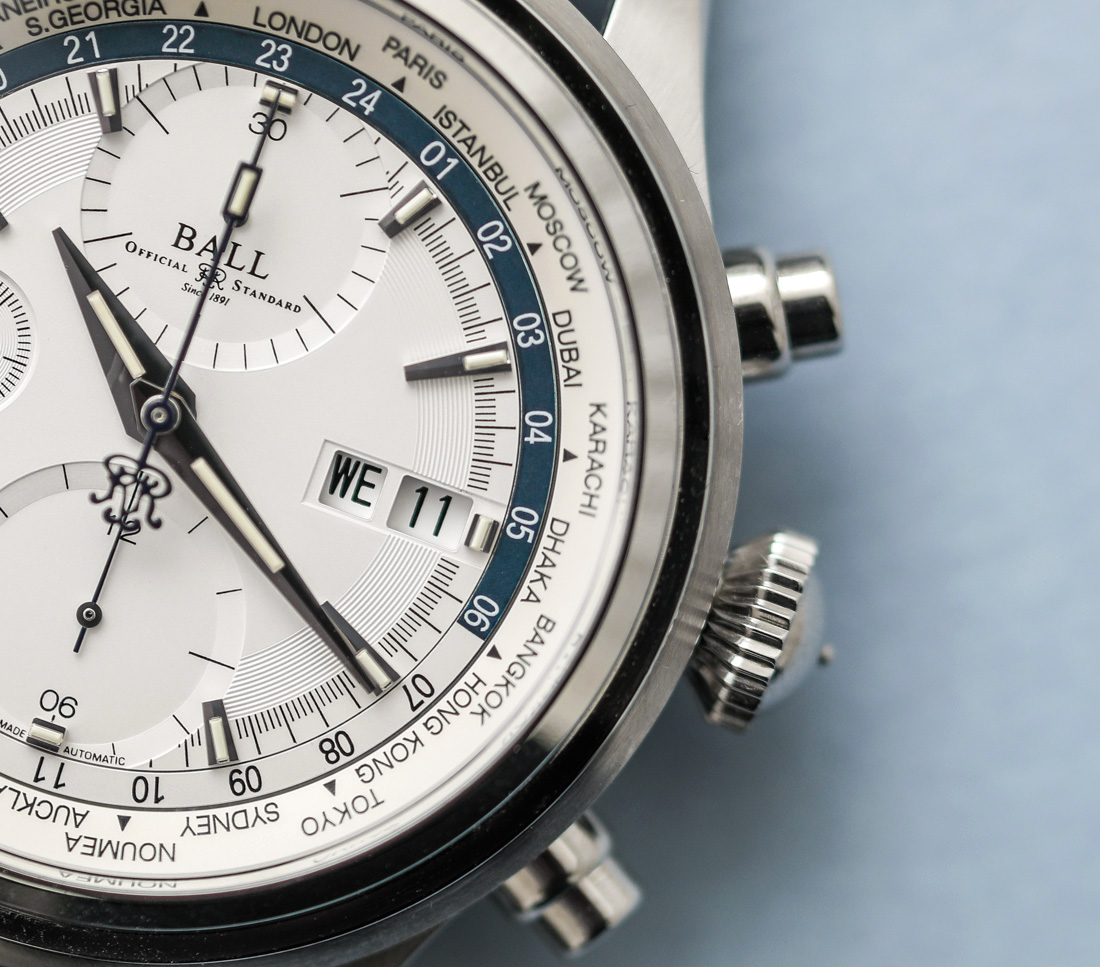 I had read that previous models of this watch had issues with the 24 hour disc having a little “give” when going from adjusting the world timer back to adjusting the time. Meaning, the 24 hour disc would wobble when the crown began to move the other way which I can see being a big pain. Ball must have remedied that issue with this updated model, as the disc didn’t waver at all for me. I also have to add that the minutes hand on this watch is impressively steady and allows the most minute of adjustment without any wobble at all, really. Overall, it’s a joy to set and handle. Just really well done simple, and legible; and I appreciate how clean the dial is compared to a lot of world timers out there that have too much of a “Rand McNally” inspired design. 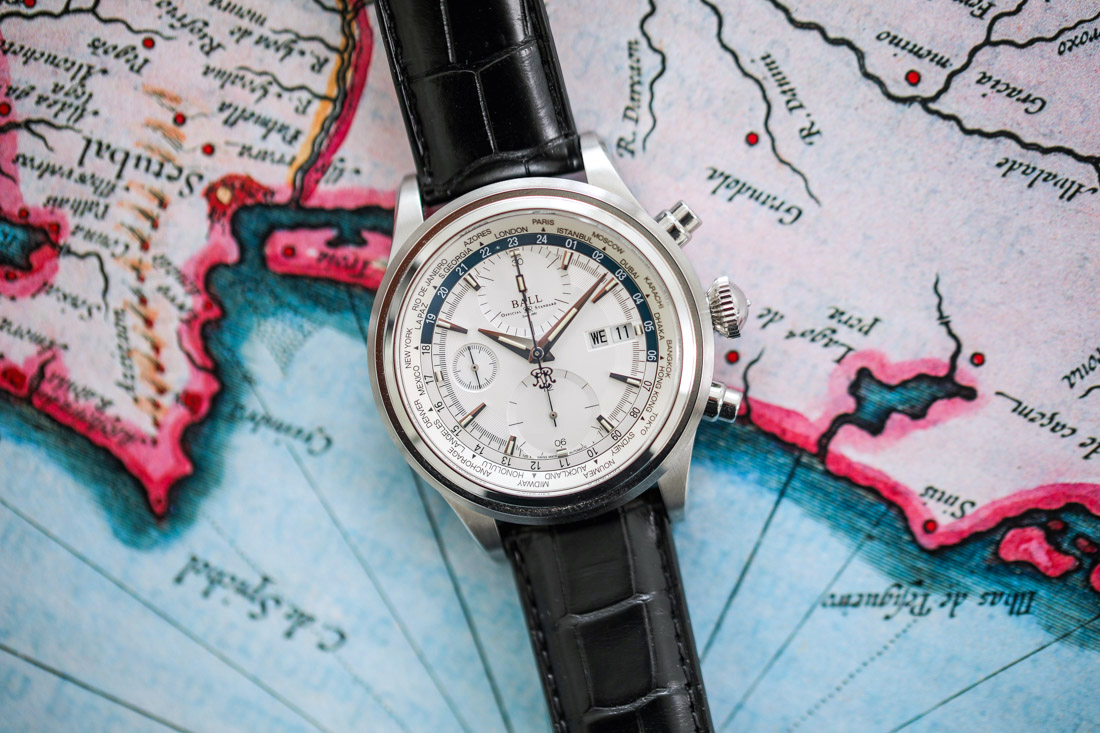 Ball intelligently decided to keep things as minimalist as possible on the dial of the Trainmaster Worldtime Chronograph, which isn’t easy considering the inherent complexity of the watch. There are two larger chronograph sub-dials at 12 and 6 o’clock and a smaller seconds sub-dial at 9 o’clock. The clean, legible, and simple sub-dials are executed successfully, and the relatively small Ball logo inside the 12 o’clock sub-dial shows some refreshing restraint.